Trucks and SUVs
By Evan Williams

Replacing the minivan, and the station wagon before that, three-row SUVs and crossovers have become the new family vehicle of choice. Intuitive design, practicality, and user-friendliness are key considerations in this competitive segment. The autoTRADER.ca team of more than 20 automotive experts from all over the country understands that these vehicles get put to the ultimate test – being a part of family life. After carefully considering and evaluating every single SUV in this segment available on the market, the Kia Telluride has been voted as the Best 3-Row SUV in the autoTRADER.ca Awards for the second year in a row.

Buyers in this segment are likely to put its seven or eight seats to use, shuttling to and from school or soccer practice. Filling those seats means that sensible cargo space is also a priority. And with mouths to feed, so is value. If those three things were all that mattered, everyone would still be driving minivans, but styling and driving enjoyment are also part of the equation. Buyers want the utility of a minivan without their vehicle looking or driving like one.

This year, there was new competition in the form of an all-new Toyota Highlander, as well as the Chevrolet Tahoe/GMC Yukon twins, which were voted as finalists in this category. The Hyundai Palisade and Subaru Ascent also made the shortlist. None of them measured up to the Telluride in the eyes of our experts, however. When we first drove it, autoTRADER.ca contributor Dan Heyman called it “one of the best values in the three-row SUV market.” More than a year later, contributor Justin Pritchard called it “the greatest return on investment for shoppers for a generously sized eight-seater.”

It’s not just that value that impressed our experts. Offering standard all-wheel drive at a price lower than most in the segment, it’s also the Telluride’s generous size and usable space. This is a three-row that can actually carry three rows of passengers – and offers the versatility to provide acres of cargo space when you’re not.

The Telluride first catches your eye with its rugged yet refined styling, which has been incredibly popular with those shopping for this minivan replacement. Once inside, it’s just as impressive for how luxurious the interior is. Ventilated seats are standard on most trims, with a heated steering wheel and front seats across the board. Heated middle seats are a common option in this segment, but the Telluride ups the ante by offering ventilated seats in the second row as well. It also features three-zone climate control and a 10.25-inch infotainment system with navigation as well as Apple CarPlay and Android Auto. Not just on the $54,695 SX Limited trim, but on even the base $46,195 EX. That’s a rarity in any automotive segment.

Loads of USB ports in all three rows keep passengers connected, while the driver will be kept alert by the thorough suite of driver attention alerts and assistance features including emergency braking, adaptive cruise control, lane-keeping assistance, rear cross-traffic avoidance braking, and blind-spot monitoring. It even boasts a dashboard display that will show you a live camera view of that blind spot when you signal to change lanes, helping you to be even more certain the road beside you is clear. Rear occupant alert warnings make sure no passenger is left behind. There’s also a safe exit feature that can stop you opening your door into a passing car or cyclist.

Family-friendly safety features like these gained the Telluride votes from our jury of experts.

The Telluride is offered exclusively with a 3.8L V6 making 291 hp and 262 lb-ft of torque, mated to an eight-speed automatic transmission. It’s a smooth and responsive powertrain that can tow up to 2,268 kg (5,000 lb), and it has an estimated fuel economy figure of 11.3 L/100 km. While not the best in the segment, it is certainly competitive. The suspension is well buttoned down, offering a level of refinement that matches its interior.

Impressive comfort, large, usable interior space, loads of standard features, and lots of safety systems at a reasonable price all contribute to exceptional value. Wrapped up in a visually pleasing appearance and you have a clear winner in the 2021 Kia Telluride. 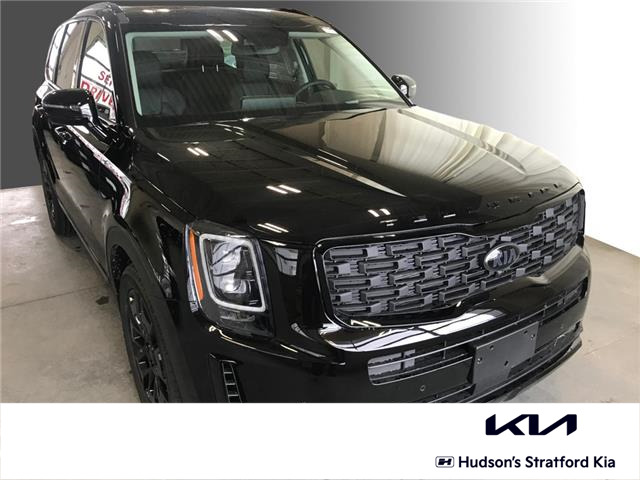