When Genesis first launched in 2009 as a luxury sedan from Hyundai, every review was qualified with some variation on “It’s a good luxury car, considering its attractive price.” That sentiment continued even after Genesis spun off as a separate brand in 2017, but since then, the brand has grown so much and barely even needs that qualifier anymore.

Sure, the G70 compact sport sedan Genesis launched in 2019 still succeeds partly because its price undercuts the key competition. But this car makes it clear that Hyundai is serious about building luxury vehicles that would be competitive regardless of price; the brand is making great vehicles, period. That’s why the Genesis G70 has been voted as the Best Overall Car in the 2021 autoTRADER.ca Awards, also winning the Best Luxury Compact Car award this year and the year prior.

The G70’s win is the conclusion reached by our jury of more than 20 auto industry experts from all over the country. They considered the merits of every car on sale in Canada right now and, in the end, determined the G70 had the best combination of traits that help it meet our 12 criteria for what makes a winner, including user-friendliness, safety, value, performance, and innovation. The G70 got the highest score in all combined car categories during voting, which is why it’s been crowned as an overall winner. There’s also a refreshed version coming next year, which should make it an even stronger offering.

All G70 variants come standard with AWD and an eight-speed automatic transmission, except the G70 2.0T Sport, which is part of an ever-shrinking cohort of luxury cars offering the manual transmission/rear-drive combo that many driving enthusiasts lust after.

As one autoTRADER.ca reviewer rightly said in their review, the G70 has a lot to prove, and it does so with handling they called “spot on,” aided by a capable rear-biased AWD system. And according to another one of our expert reviews of a 3.3T model, “If you put the hammer down, you’ll experience the sensation of the hand of God pushing you back in your seat.”

Meanwhile, our reviewer said the G70’s available adaptive suspension is never punishing, even in the car’s most aggressive sport mode, and the big Brembo brakes aren’t just there to be pretty: “Stab the brake pedal and it will haul things down with such alacrity that you’ll worry your kidneys will stick to the windshield.”

The most serious criticism we could level against the G70 is that its interior is starting to look a bit dated, but it still manages to make a long-lasting impression with its craftsmanship, luxury materials, and clear attention to detail.

The G70’s central 8.0-inch touchscreen is smaller than what you’ll find in some of this car’s competitors, but it won praise for its straightforward controls for media and navigation functions. The climate control system relies entirely on easy-to-use and analogue buttons and dials.

By contrast, BMW’s similarly powerful M340i starts at $62,900, and you’re looking at thousands more to match the G70 3.3T Prestige’s list of features.

Genesis adds to the G70’s value picture by making most driver assist and safety features standard across the range. That includes adaptive cruise control with stop-and-go, forward-collision avoidance assist, lane-departure warning with lane-keep assist, rear cross-traffic warning, and blind-spot warning with lane-change assist. The only items that higher trims add are parking proximity sensors and a multi-view camera system.

Because it’s still a relative newcomer in the luxury car field, Genesis knew it needed an edge beyond its value-added pricing model. That’s where the brand’s novel purchase and maintenance model comes in: Book a test drive, and Genesis brings the car you want to try to your home or workplace. Buy it, and they’ll deliver it to you. And when it’s time to get it serviced, Genesis picks it up and leaves behind a courtesy car.

We’ll let our reviewers summarize why the G70 is this year’s autoTRADER.ca Award winner for Best Overall Car.

The G70 “looks the part of a luxury car, it performs like one, and it’s equipped like one, too.” If you want further proof the G70 deserves this prize, take another reviewer’s advice: “Test drive one. Then try wiping the smile off your face.” 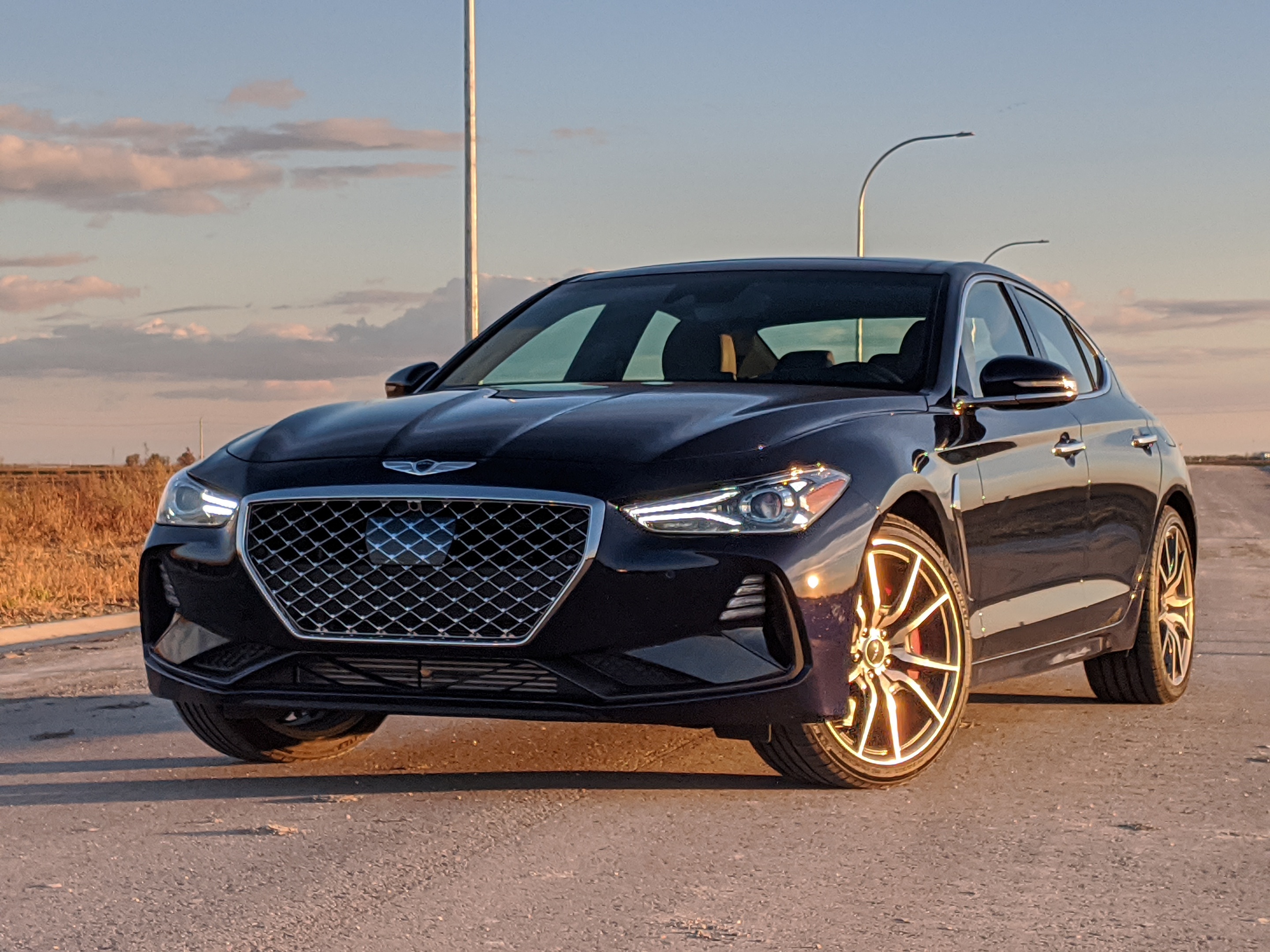