We go a-knockin' on ten of the most rockin' vans ever.

We go a-knockin' on ten of the most rockin' vans ever.

A van is more than transportation, it's also a home away from home, base camp for adventure, a mobile command centre, or maybe just a really great hangout. While not quite as cool now as they were in the heyday of giant unicorn side-murals and wall-to-wall shag carpeting, there's still something about a good van that makes you want to load it up with stuff and hit the open road.

Part of this appeal has been drilled into our heads by the antics of hero-vans on both the big screen and the boob tube. With the new Teenage Mutant Ninja Turtles hitting movie theatres this Friday we'll see yet another van getting ready to fight evil-doers, hard-shell style. I wonder if it's protected by Turtle Wax?

Here are our picks for the ten best vans in TV and Movie history. Van-tastic! 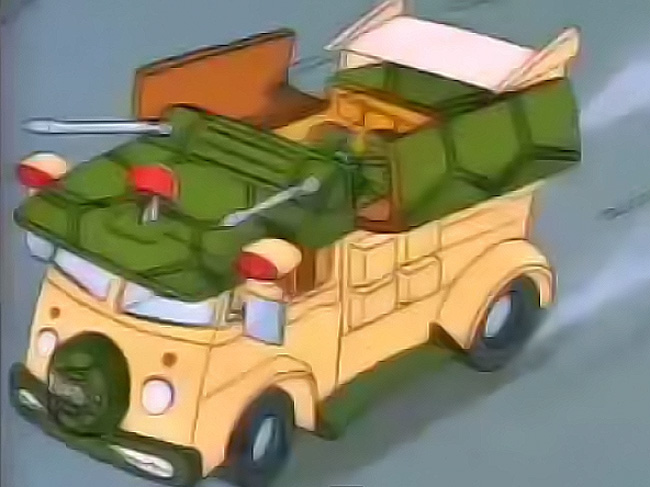 If you were a kid in the '80s and '90s, you likely played with one of these sweet, ninja-bashing plastic vans. Fitted with something called the “tenderizer”, the Party Wagon soon put paid to the evil Shredder and his foot-soldier minions.

In the original animated series, it's hard to pinpoint exactly what kind of van it's supposed to be, but the Party Wagon appears to be halfway between a Toyota Van and a VW Microbus, except with cartoon cannons and other goodies. In the modern reboot, it'll be a painted-up pre-'1967 Ford Econoline.

To be frank, the 2014 movie has been receiving a lot of complaints about diverging from the original spirit of the TMNT series, but at least they got the van right. Those giant tires look a bit unrealistic, but hey, this is a movie about four sewer-dwelling, pizza-scarfing, mutant turtles. Cowabunga, dude! 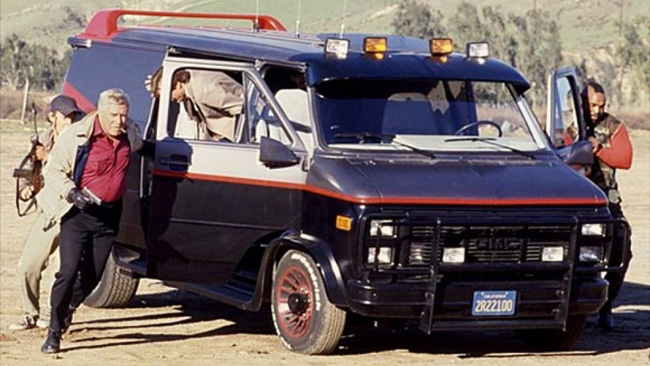 I'd pity the fool who didn't include this black-and-grey mobile command centre high on any list where vans were concerned. Leaving it off would reduce any article to mere jibber-jabber.

Based around a 1983 GMC Vandura, this customized two-tone van boasts a red spoiler, turbine mag wheels, and B.A. Baracus at the wheel. For the nomadic A-Team, it's the nerve centre, planning department, and getaway vehicle for their many operations. If you need a lift, if no one else can help you, and if you can find it, maybe you can call on the A-Team van. 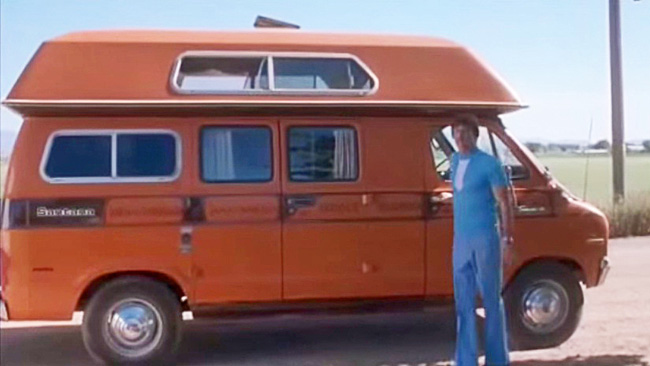 However, before we go taking this thing off any sweet jumps, let's remember that it belongs to Uncle Rico, who has a tendency to throw steak at people when he gets ornery. Instead, let's give this orange beauty the respect it deserves – it turns out you can even rent the original if you want to take it camping. 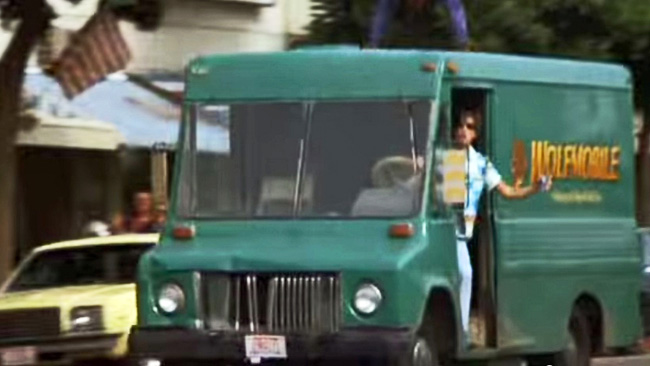 Best remembered for the Surfin' USA scene where Michael J. Fox's teenage werewolf gets up on top of this green beat-up panel delivery van and displays, “a total disregard for public safety,” the Wolfmobile was slightly battered, but it made audiences howl with delight.

Teenwolf's van, or at least a tribute to it, can now be found on Twitter and Facebook, promoting events throughout Los Angeles with a handstanding Teenwolf (stuffed) atop its roof. Surf's up! 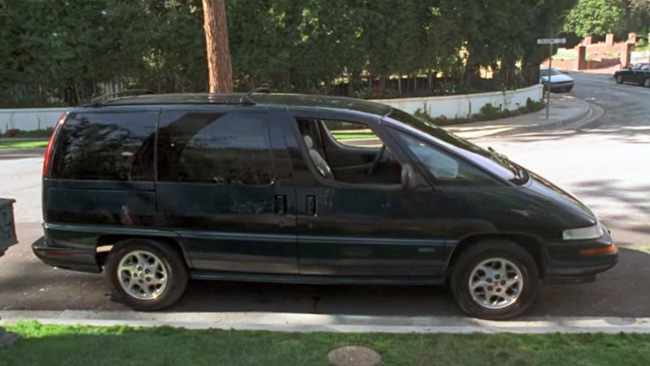 Now this right here? This is the Cadillac of minivans. The ride of choice for Travolta's movie-making gangster in the film Get Shorty, it's a running gag throughout the whole show.

Truth be told, the Silhouette was not a particularly good minivan, but it was plenty striking looking. For this quirky gangster flick, it was perfect casting. 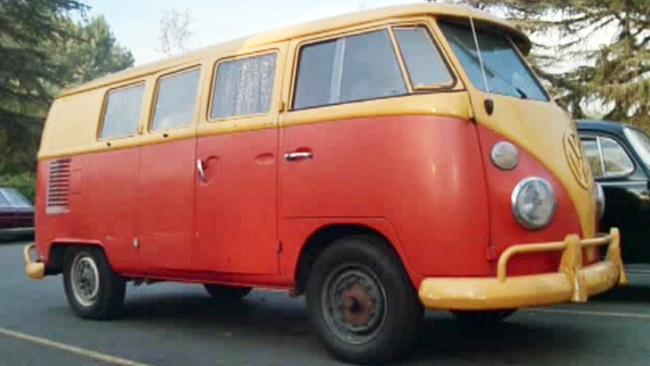 Here's the first of a trio of VW Microbuses that made the jump from hippie transportation to silver screen idol. First seen in the opening of Fast Times at Ridgemont High as a trio of dudes tumble out in a haze of marijuana smoke, this VW is as much of Jeff Spicoli's character as his surfboard is. Totally gnarly, dude.

Back to the Future VW Microbus 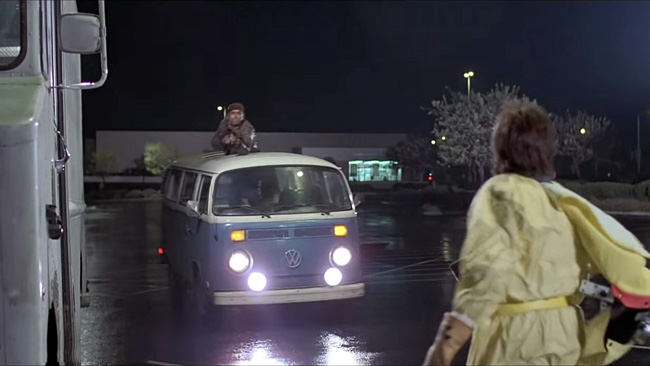 As the ride of choice for the Libyan terrorists in Back to the Future, it was less peace n' love, and more AK-47. Great Scott! But I suppose if you're going to steal plutonium, you have to expect this sort of thing. 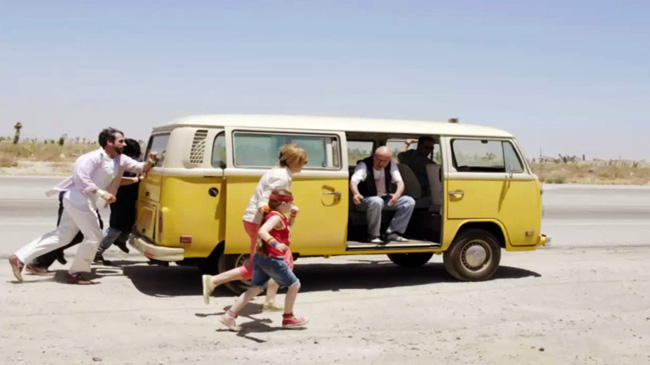 Last of our VW trio, the little yellow bus from Little Miss Sunshine. Elderly, dysfunctional, and barely holding itself together, this van nevertheless hangs on throughout the film – just like the embattled family in question. As the Hoovers all push their dilapidated bus to get it going (thanks to a failing clutch), you know they're all going to be okay. 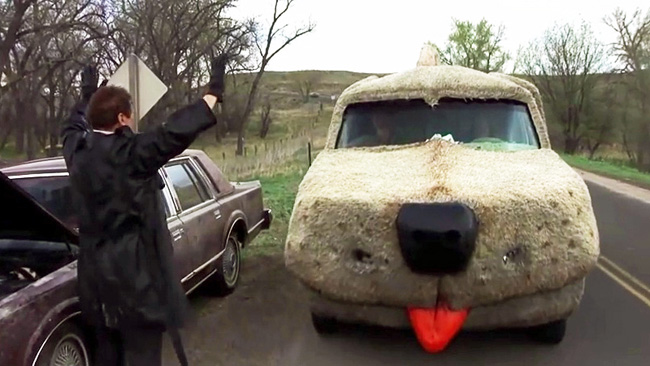 “They're driving a 1984... Sheepdog.” As a line, this has got to be one of the greatest things ever said onscreen. And it's true, too! Harry Dunne spent his entire life savings to convert his van into a rolling, shag-covered pooch, and every penny was well spent.

When the duo from Dumb and Dumber hit the road, we get to see this rolling monstrosity put through its paces. The chances of ever seeing anything so glorious are one in a million – so I'm saying there's a chance. 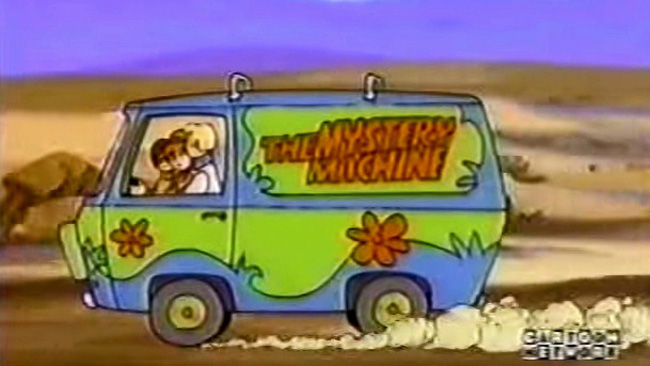 Car trouble? Ruh-roh. Vehicle of choice for the mystery-solving crew of Fred, Velma, Daphne, Shaggy, and the titular Great Dane, Scooby-Doo, the Mystery Machine was one brightly coloured orange, blue and green van, complete with groovy flowers. As it's a cartoon vehicle, it's hard to gauge the actual source vehicle, but early versions look a like a 1960s Chevy Greenbrier.

Let’s remember it that way, and pretend the 2002 Freddie Prinze Jr. live-action movie never happened. Er, I mean, movie? What movie? Never heard of it – have a Scooby Snack.