"Airbag deployment is not simulated."

In any other game, you might imagine this line was inserted into the pre-game disclaimer as a bit of whimsy. And certainly, Forza Horizon 2 has its share of whimsy. But it's mainly about spirited driving. On-road. Off-road. Straight into a tree. Airbag deployment is not simulated.

From its very first installment on the original Xbox, the Forza Motorsport series has been about detailed car models, realistic physics, and gorgeous wrecks. Forza Horizon changed the setting from enclosed racetracks to an open-world sandbox, albeit with a generous application of impenetrable highway barriers and improbably durable wooden fencing.

The sequel on Xbox One does away with the vast majority of these arbitrary walls, leaving players free to channel their inner Julie Andrews and pirouette carefree atop the hills, alive with the sound of engine noise. This freedom continues into the design of the game – after a short sprint in a Lamborghini Huracán to demonstrate the controls, you’re given a choice of three sports cars. Pick one, and you’re off to partake in the eponymous Horizon Festival.

Littered across the expansive game map are a variety of races, challenges, and hidden bonuses. Championship races are prominently marked – complete them to proceed to the next leg of the Horizon Festival road trip, which unlocks additional events and music tracks. Bucket list challenges put you in an iconic vehicle and task you with racing from point A to B, blitzing past a speed trap camera, or performing a series of acrobatic stunts. Barn finds and billboards are easy-to-miss bonuses, rewarding you with a new (to you) vehicle, experience points, or a discount on fast travel.

Tired of your current ride? Visit the Auto Show and pick out a new one. Or head to the Garage to retune your existing vehicle, maybe do a full-on custom paint job. Once you’re done, you can visit a Car Meet and show off your efforts and admire others’ handiwork. See something that strikes your fancy? Select any vehicle and you can copy their specific configuration into your own inventory, to be applied or modified as you see fit. 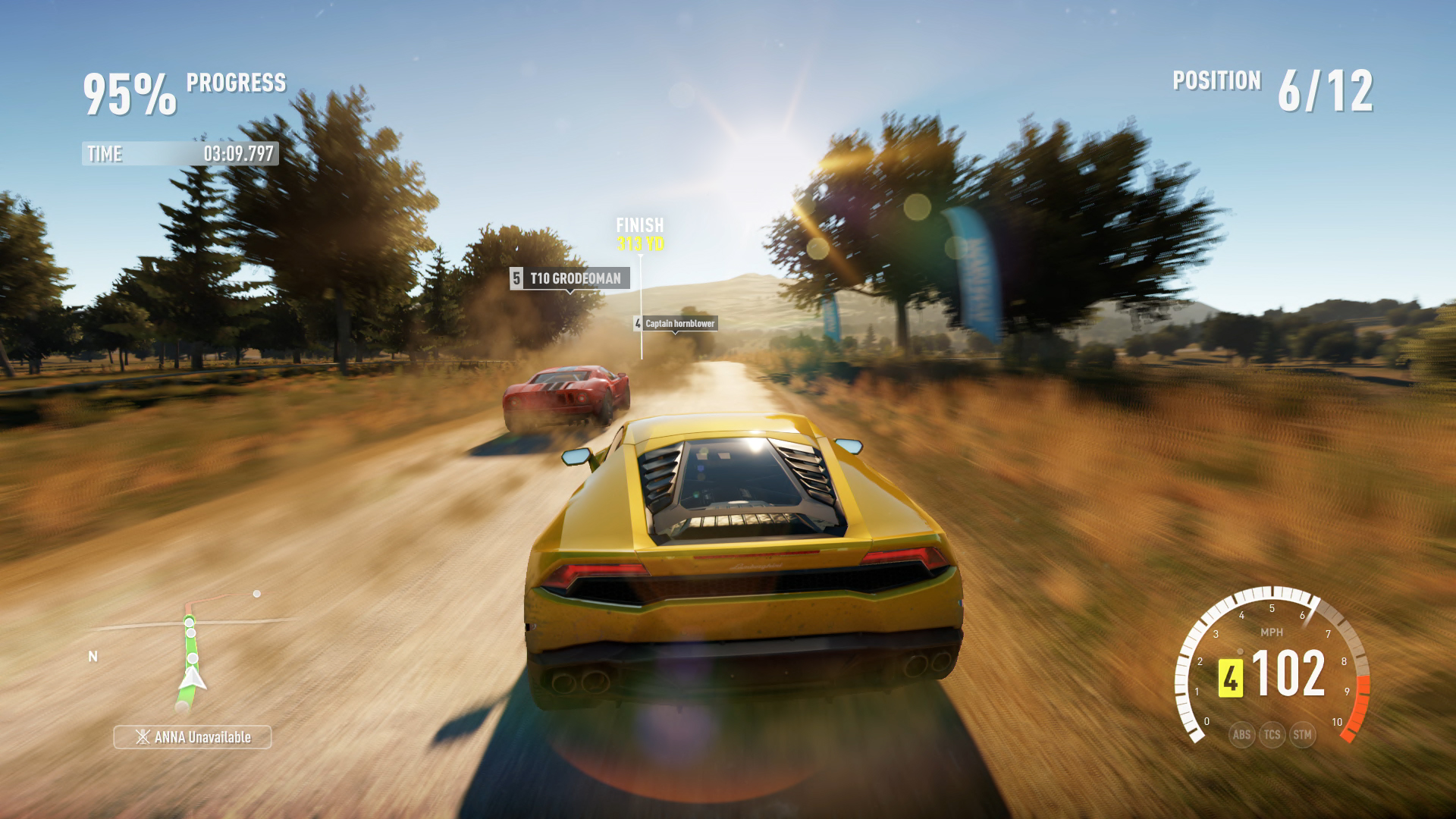 Dirt track racing in a Lamborghini Huracán; note that the speed is in mph.

You don't need me to tell you that the game looks and sounds amazing, but what the videos on YouTube can't convey is the feel of the cars. Even if you don't have a racing rig, you get an incredible amount of tactile response through the controller. Ease down on the right trigger and you'll feel the engine gently purr under your finger. Slam it home and the entire controller rumbles violently until you get up to speed. If you're not careful, it can make a car snob out of you. "Yes, the McLaren F1 goes very fast, but I like the way the Porsche 911 feels in corners."

Full-on racing sim it is decidedly not. Take a corner at 250 km/h in the McLaren P1? Sure. Tumble hood over trunk in a Lancia and drive off like nothing happened? Done. Offroad in a Koenigsegg Agera, flying down the Italian countryside, literally airborne? Easy.

But neither is it Mario Kart or Need For Speed. Though the game rewards showy, risky behaviour and clean driving alike in the form of skill points, it’s clean driving that’ll get you to the finish line first (and some situationally appropriate paint trading to cross it).

Forza Horizon 2 is, in many ways, a gateway. You don’t need to have a racing wheel setup to enjoy the game. You don’t need to have preternatural talent to win a race. You don’t even need to know how to drive! (Though it definitely helps.) Turn on the full assortment of driver’s aids and you can turn out a respectable showing by just holding down the throttle and managing your steering. Turn them off and you get a tidy bonus at the end of every race. Risk balanced with ample reward.

You’re allowed, even encouraged, to make mistakes. After all, you can just hit Rewind and re-attempt that particularly gnarly turn. Missed a potential shortcut? Rewind. Sure, it’s a flagrant violation of the Temporal Prime Directive, but it’s a great way to learn how to tackle specific corners without restarting the entire race. As my piano teacher used to say: you have no problem with the first three bars of the music, why repeat them?

After every race, you’ll be presented with an opponent who finished the course just slightly faster than you. And why not, you’ve just come off the track and you know where you can pick up some time. It’s gentle nudges like these that, combined with the gameplay tools at your disposal, can quickly convert curious bystanders into absolute racing fiends. 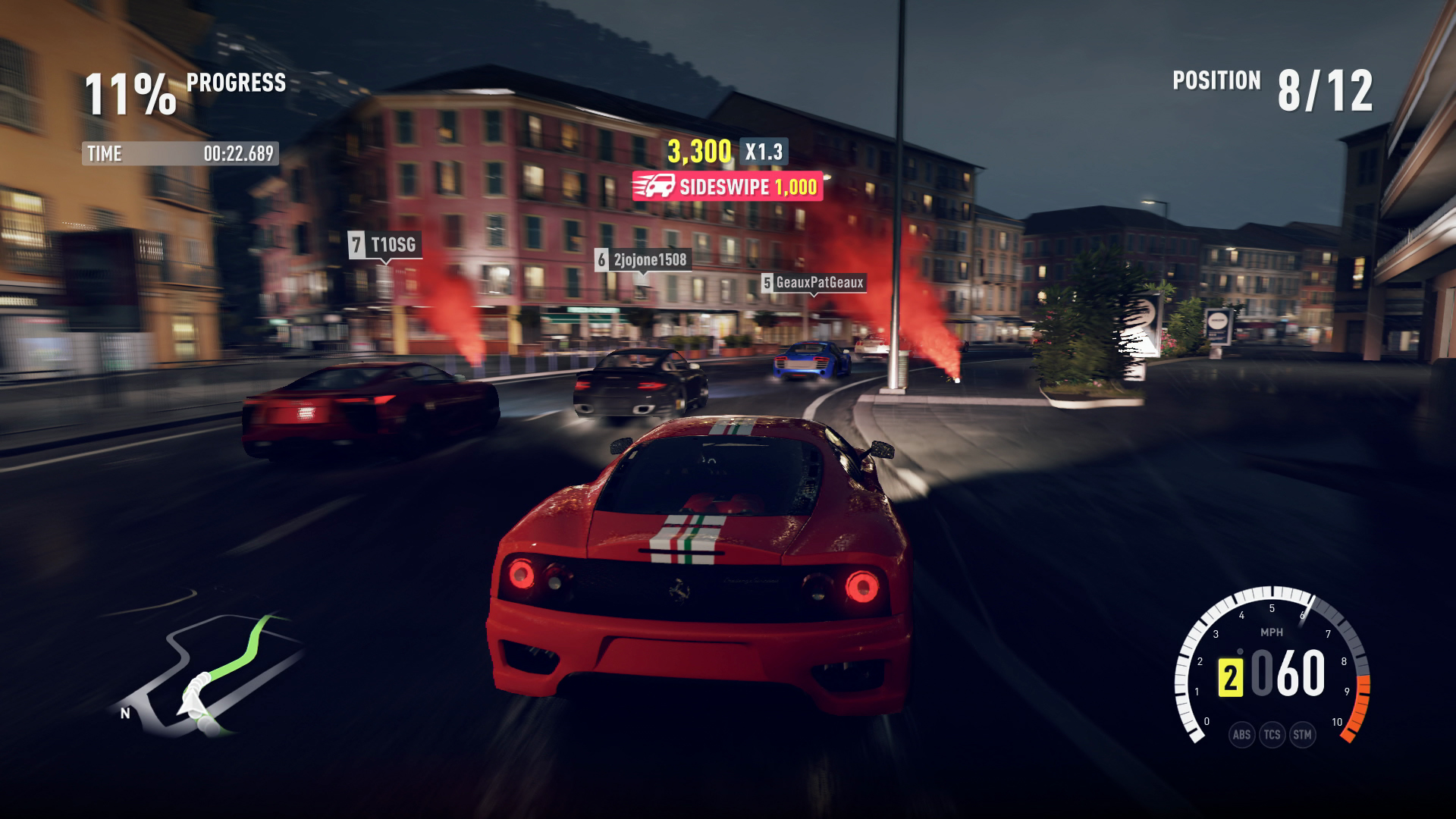 Racing at night in the city. Those are all real Gamertags above the other racers, by the way.

Afraid of competing online? Outside of races, you’ll see cars labelled with Xbox Live Gamertags. These are Drivatars – digital representations of that player’s specific skills and habits – matched to your current vehicle and level. You can challenge them to an impromptu contest for some quick money and experience. It’s also a good way to test your mettle before going online with live opponents, where the rewind function isn’t available. Oh, and don’t worry about making a bad first impression; your own Drivatar’s been representing you on consoles across the globe. People already know what to expect.

Needless to say, I love the game. Do I have any complaints? Of course! Otherwise, instead of words, this review would consist of a single picture of Fry from Futurama with the caption “SHUT UP AND TAKE MY MONEY.” (Actually, that’s really tempting.)

I’ll start with the most egregious: load screens. They’re every bit as sun-drenched and gorgeous as the rest of the game, but there’s a lot of them and they’re unusually long for a game running off the hard drive. As it turns out, they’re long because the game isn’t loading assets from the hard drive – it’s pulling data from the internet.

Every time you complete a race, your Drivatar is updated and new opponent data is loaded to better reflect your skill level, thus ensuring that you’re never stuck with a stale set of competitors. But depending on your internet connection, load screens can run well past the ten-second mark. The quick and dirty solution? Pull out the network cable from the back of the Xbox and watch the load screens fly by. But keep in mind that you’re missing out on meeting new rivals and having your own Drivatar updated to reflect your latest victories.

Next: the menu system. If this were a vehicle infotainment system, I’d compare it to the first-generation BMW iDrive: functional, but some basic functions are incredibly difficult to find. Want to switch to manual shifting? That’s tucked under Difficulty. Want to switch to a different car? You’ve got to go to a garage. That’s not a menu item, by the way, you actually have to either drive or fast travel to one of the garage locations to make the swap.

Beside these two glaring shortcomings, the remainder are minor niggles related mainly to the adaptation of the Forza game engine to a large, open world: at speeds approaching 300 km/h, you’ll start to notice some pop-in; the fields of wheat and lavender are composed of low-res 2D sprites; interiors are curiously detailed, but flip any vehicle in the game and you’ll find an undercarriage ripped straight from a Hot Wheels model. Sure, you’re not supposed to flip them, but in a game which keeps track of time spent airborne, it’s a strange omission. 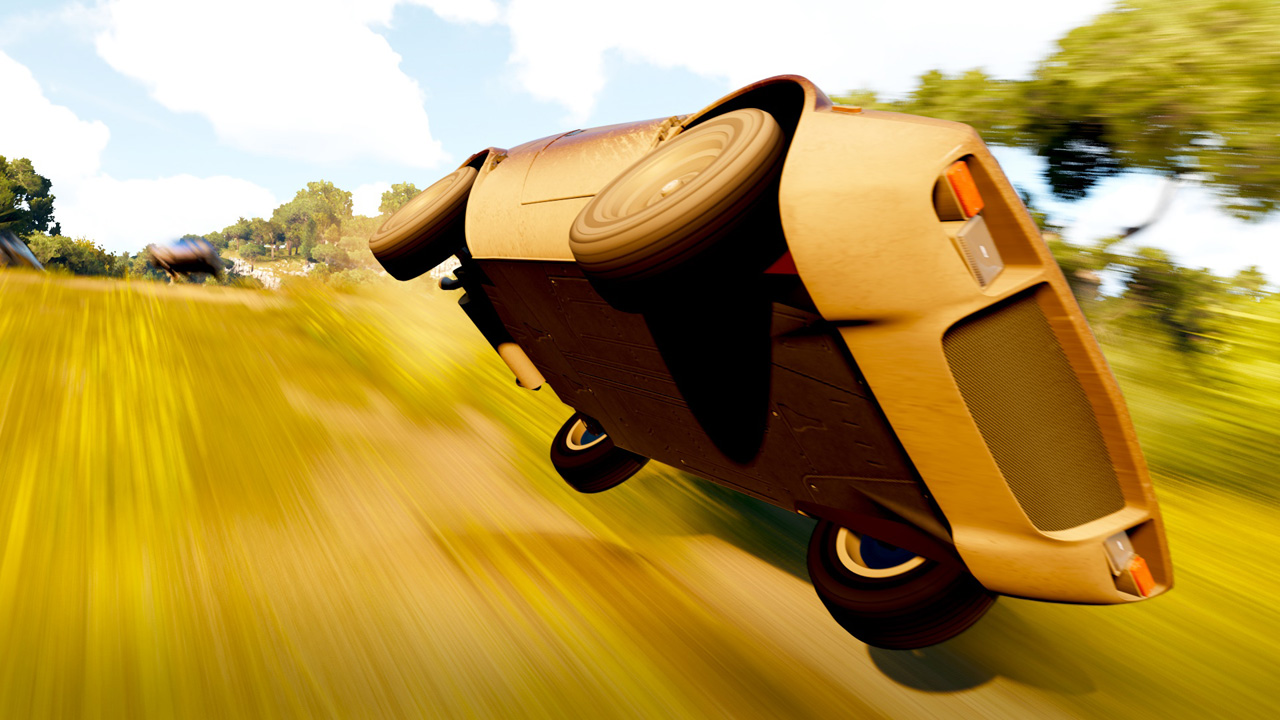 Another angle on the Lancia from the lead image. Notice the curiously flat undercarriage.

Oh wait! The story. How could I forget about the story? Um, well, there isn’t one. You play as the target demographic representative, Scruffy McBrodude, who was cast in the same factory as the lug nuts on the Lamborghini Huracán you drive in the opening sequence, and imbued with the same emotional range. There’s a girl, but she’s entirely too clothed to be a love interest. And then there’s that British guy, Ben. If our silent protagonist is a nut, then Ben is a straight-up tool. He’s the host of the Horizon Festival and he’s very busy, you’ll have to excuse him, but aren’t you glad you get to drive a Huracán, lucky you? Don’t take my word for it, the entire first half of Polygon’s preview was dedicated to chewing him out.

Despite a couple of minor missteps, developers Turn 10 and Playground Games have expertly crafted a driving game not for racing sim fans, nor for the rest of us, but for all of us. You might think this is all overwhelmingly positive. And it is, I’ll readily admit. That a big-budget production should be dripping with gorgeous graphics and meticulous audio design is a given, and so it is the case here, with loving attention lavished on every pixel and waveform. But triple-A titles these days tend to be very scripted, very linear experiences, where the gameplay boils down not to player choice, but player performance. Curious then, that a game that is ostensibly all about performance, should offer the most choice in any game I’ve played this year. If nothing else, that deserves recognition.

To cap off this review, I’d like to share with you my favourite activity in the game. Drive a little northwest of Castelletto and you’ll see a bucket list marker just off the road, where a couple of farmhouses are standing. Drive around back and you’ll find what looks like a white SUV with red stripes. The challenge: Ignore the road in a Bowler EXR S.

The GPS guidance leads you out of the trees toward the open fields, but you’re soon heading straight towards another copse in the distance. “Turn around when it is safe to do so,” the computerized voice admonishes. It only spurs you on. Here in the rolling hills, you're not giving it gas, you're giving it verve. As you barrel through the countryside north of 200 km/h to the bombastic chords of Beethoven's Symphony No. 3 "Eroica", you might even exclaim "Je suis Napoleon!" with heroic jubilation.

And then your chariot slips the surly bonds of Earth. Straight into a tree.

Airbag deployment is not simulated.

Airbag deployment is not simulated.