I had never ridden a bike with a horizontally opposed engine before. I’d heard that some bikes buck and kick when you start them, but my experience with vertical Vs and inline-fours hadn’t really prepared me for the violent thrust to the right when I thumbed the starter on BMW’s tough-as-guts R nineT.

As if to say, “Yeah alright, let’s get on with this,” the 1170 cc, air-cooled, twin-cylinder boxer fires into life, bucks to the right and just about picks the bike up off the kickstand – beast mode: Engaged.

BMW says this bike is about the soul of riding. That this is a purist’s bike built of classic styling and classic riding excitement. They’re right. The “nineT” references 90 years of BMW motorcycles, and this is a bike that will ignite nostalgic passions and performance-loving sport enthusiasts alike.

Its 110 hp and 88 lb-ft of torque stand ready to rip the driveway to shreds and launch the 222-kg R nineT out onto the road. The clutch bite point is a long way out from the bar, but is well-defined. As a sports bike, the BMW R nineT is no lightweight, but that engine configuration keeps everything down low. The seat height is nice and low too, and the upright riding position inspires maximum confidence. 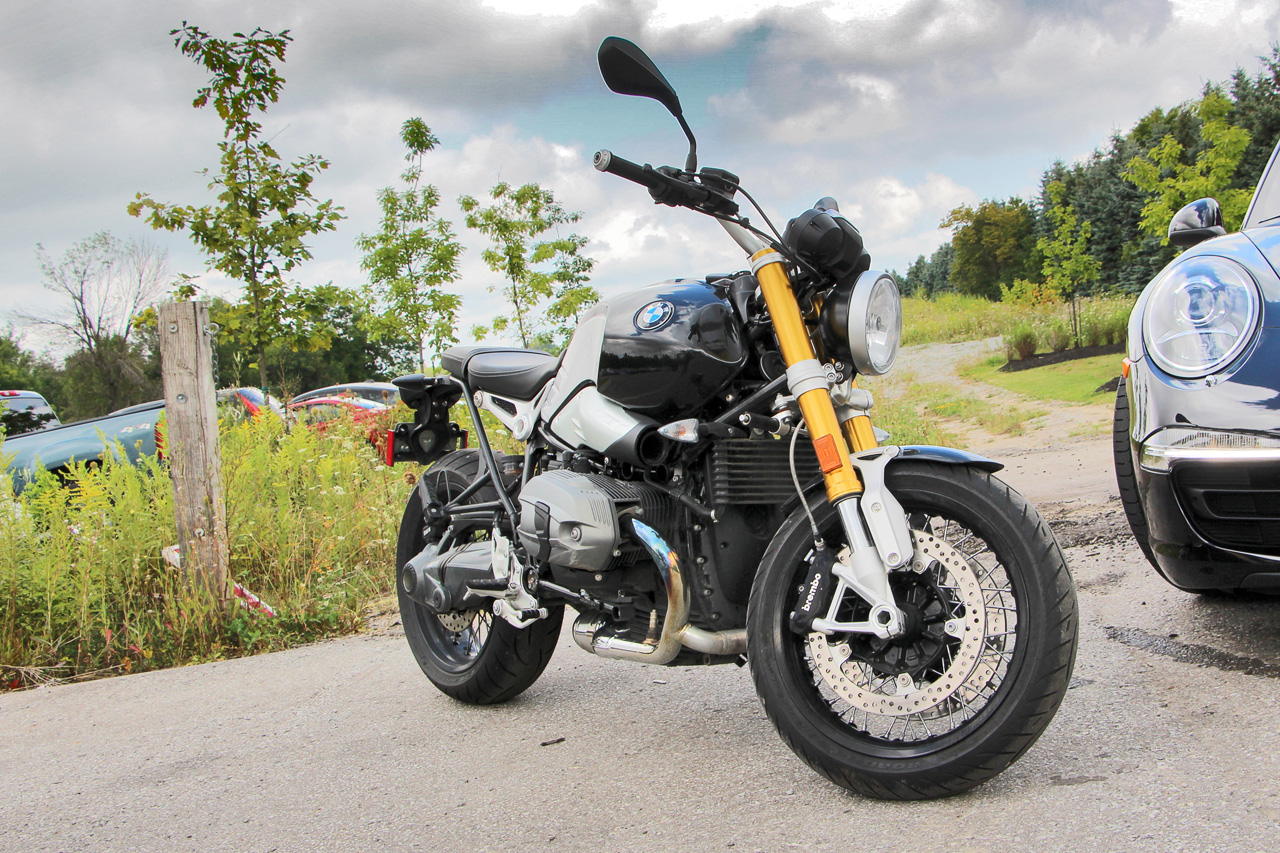 The beefy upside-down forks up front give the appearance of a stable, solid and advanced front end – a promise that is backed up with performance. Turn the BMW R nineT in and the front end is like glue. This is the most unflappable bike I rode all summer, so unflappable that I was confident taking pillion passengers on off-ramp assault raids all week long. No matter the surface, no matter the nervous wiggles going on behind me, the R nineT adopted the trajectory I assigned it, and bloody well stayed there. Apart from start-up and take off there was no sign of the heavy shaft-drive nor the single-sided swing arm.

The wheelbase feels shorter than it is, with a quick turn-in, and a propensity to hike that front end like a drunk aunty’s skirt. With radial four-piston monoblock brake calipers, steel-braided brake lines and floating 320 mm brake discs. Under braking the R nineT is stable, but the ABS is a touch too intrusive on the back end – you can turn it off.

At 5’6” I very rarely find a bike I can put both feet flat on the ground on so I was pleased to be able to do so on this R nineT. Truth be told there is no real reason to have both feet flat firmly on the ground except for burnouts, so I’m not entirely sure why that made me so happy.

Ergonomically this BMW is laid out spectacularly well, all the controls fall easily to hand and are sensibly placed. Both levers have four-stages of adjustment, I found my balance on two for the clutch and four for the front brake. Wind buffeting is as you’d expect – severe but not intolerable. The wind clearly bothers the bike though as I returned a pretty bad fuel average of 7.1 L/100 km for the week. 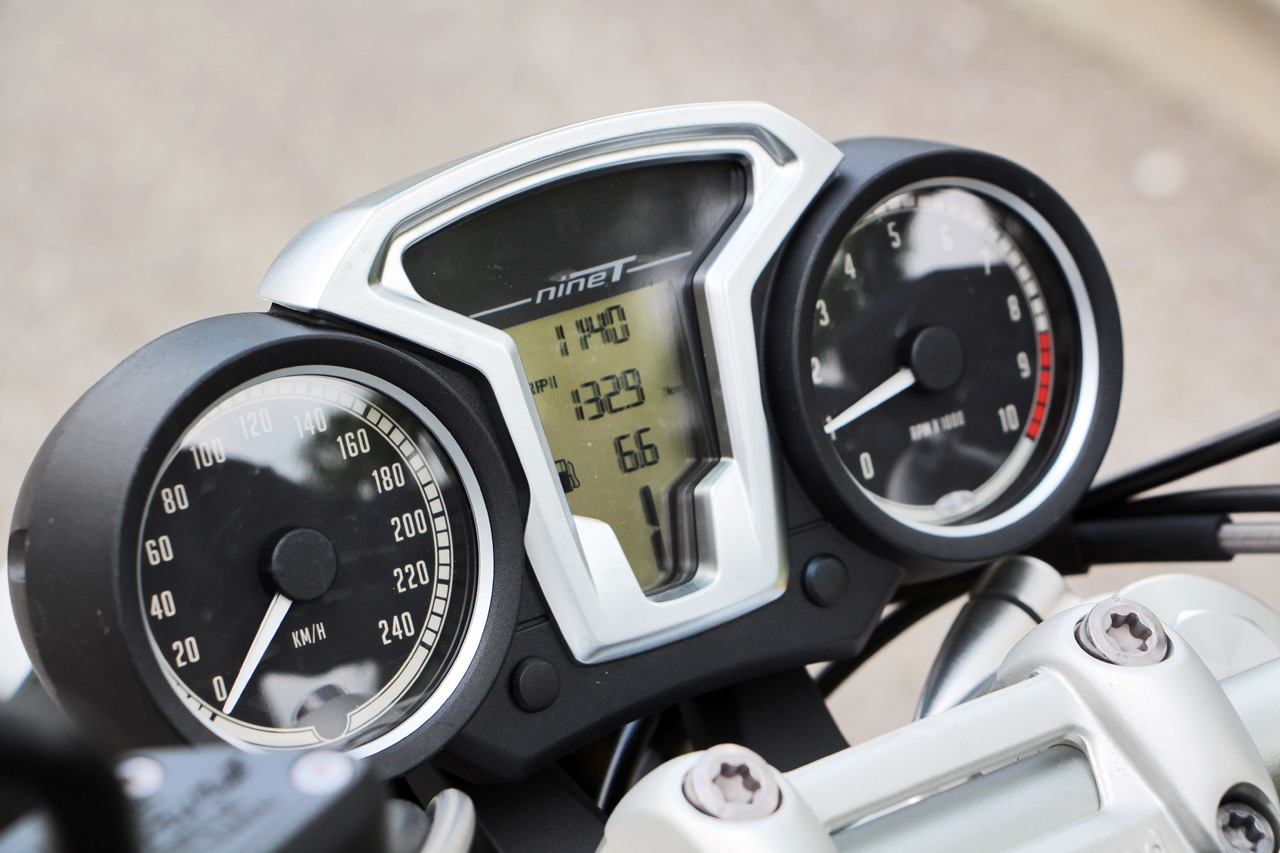 That’s all part of the charm of this bike though. It’s big and burly and unsophisticated. A large lump of an engine fits snugly into a gorgeous, old-school design that still has incredible sporting capability. It inspires bulk confidence at every turn.

Adding to the purist’s motif, BMW has designed the R nineT’s tubular steel spaceframe from the ground up to be customizable.  Everything rear of the seat can be removed altered or added to. Don’t like pillions? Remove the entire pillion frame and have yourself an ultra-stylish single seat café-racer. Like pillions, but not all the time? Whack the BMW chrome tail cover on for a speedy and sexy streamlined look.

The wire-spoked 17x5.5-inch rear wheel can be replaced by a 17x6-inch for more “brute”. Even the fuel tank and airbox covers have hand-brushed aluminum.

That’s a lot of attention to detail for a $16,200 bike – but this isn’t any old bike. This might be the most soulful, exciting and stylish bike on the market right now. There is an old-school sense of style and pride built into this rig that translates into the riding experience.

It’s obvious that this was a project that tugged at the heartstrings of BMW engineers. It tugs at mine too.