Over the years, the Batmobile has become a beloved part of the Batman mythos – more than any other vehicle in comic books, although over...
Advertisement

Over the years, the Batmobile has become a beloved part of the Batman mythos – more than any other vehicle in comic books, although over...

Over the years, the Batmobile has become a beloved part of the Batman mythos – more than any other vehicle in comic books, although over the years attempts were made to replicate its success. Now, it's tempting reach for a cliché and subtitle this article "The Good, The Bad and The Ugly," but perhaps a better choice would be "The Good, The Bad and The Ugly, and the Really, Really, Unbelievably, Unforgivably Ugly." Anyway, on with the show... 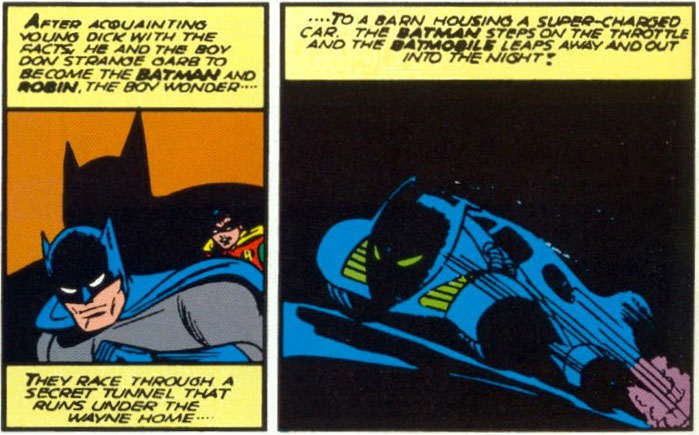 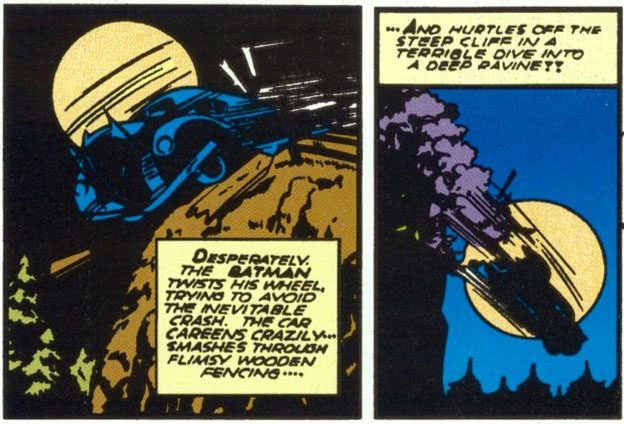 The first, the best and, as you'll see, the inspiration for much of what followed. Although Batman was pitctured in a car in his very first appearance, it was just a simple red sedan that he might also have used to take Aunt Mildred to church on Sunday mornings. A few issues later, however, a distinctive Batmobile made its first real appearance.

In this awesome vehicle, he'd have no problem chasing down criminals, right? Right?

Uh, no. A mere three pages after its debut, the Joker runs Batman off a cliff and the first Batmobile meets an inglorious end. Yet sometimes from inauspicious starts legends are born. By the very next issue Batman had obtained a new, identical car, and the Batmobile swiftly became a fixture of pop culture lore.

Where Batman rates a series of cars, his partners merited no such consideration. Pretty much since his first appearance, Robin has scooted around on a motorcycle – amazing when you consider he was initially an eight-year-old boy (later writers aged him into his teens). Meanwhile, Batgirl got a very similar bike when she patrolled the streets. 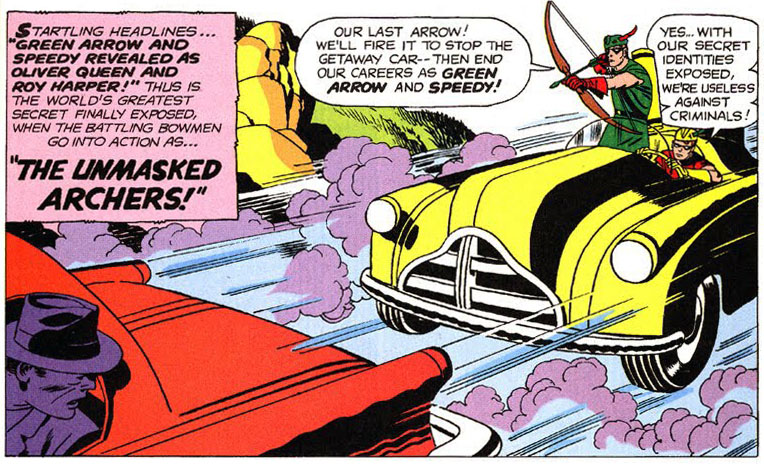 Green Arrow has always been little more than a pale green imitation of Batman, getting his own teenage-boy sidekick and even hiding in the "Arrow Cave", so it follows that a car of his own would appear on this list, too. The Arrowcar (which wasn't even green or shaped like an arrow) first appeared in a 1943 comic, yet somehow failed to grip the popular imagination. Nevertheless, over the next few decades it did make occasional appearances, until Green Arrow himself chose to blow it up in the 1970s.

In the 1960s, Marvel comics, publisher of Spider-Man, set itself apart by burdening its heroes with touches of real-world angst, none more afflicted than Spider-Man. In the early 1970s, plagued by money troubles, Spidey accepts a car manufacturer's offer to pay him to drive around in a custom-built, non-polluting "Spider-Mobile." To his credit, the self-aware Spider-Man himself dislikes it on its first appearance. Amazingly, the Spider-Mobile can drive up the side of buildings and shoot webs among its other spider-like abilities, yet becomes a mere object of derision. 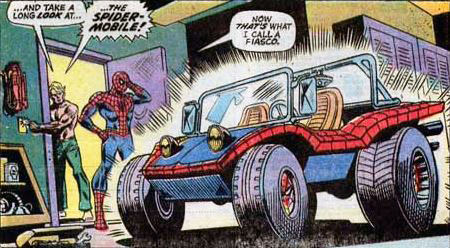 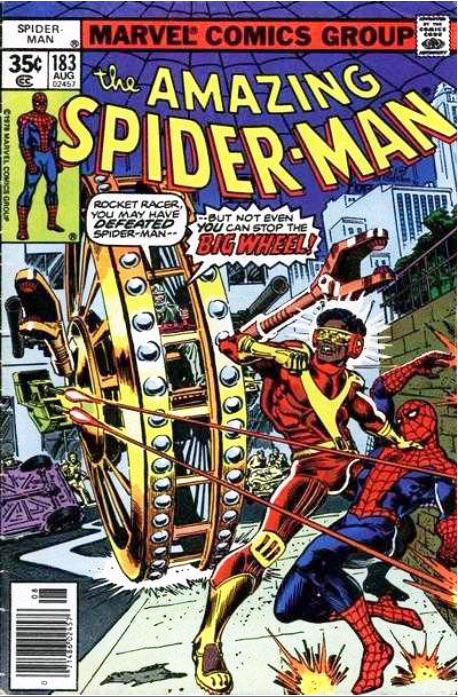 Let's play an imagination game. If someone is rude to you, what is your response? Would you be rude right back? Or maybe make a mental note to avoid that person in the future? Or do you hire a genius lunatic to build you a gigantic wheel so you can ride around in it and attempt to crush that person? Clearly – CLEARLY – the best answer is the final one. In his first appearance, a man named Jackson Weele is angry at the Rocket Racer (a skateboard-riding jerk) for making fun of him, so seeks revenge by taking on the name "Big Wheel" and attacking Racer while he's fighting Spider-Man. Unfortunately, his quest for vengeance ends unsuccessfully. He crashes into the river, and his wheel sinks to the bottom. 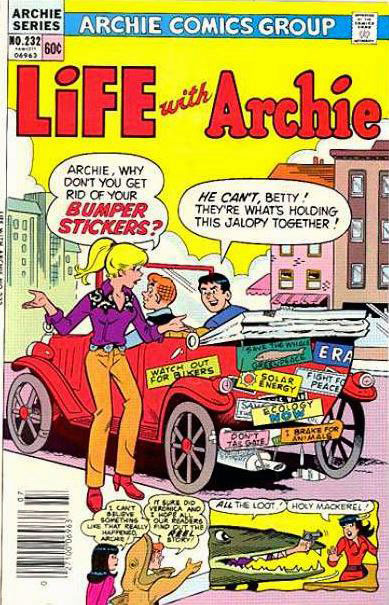 For decades, Archie drove around in a 1916 Model T that was always referred to simply as his jalopy – in fact, chances are the word "jalopy" hasn't been used in decades other than in connection to Archie. Prone to breakdowns and the object of much ridicule, nevertheless the jalopy became a beloved member of the Riverdale gang. Sadly, because in our world chaos reigns and anything beautiful must be destroyed, in the early 1980s Archie comics publisher opted to smash the jalopy to pieces. And a little light went out of the world. (However, the jalopy did appear in a 1990s episode of the Simpsons, as Homer is violently ejected from it.)

For almost all of his 70-year existence, Captain America has utilised this custom detailed vehicle, although the frequency of its usage ebbs and flows as the writers come and go. Usually, it's painted in garish red, white and blue scheme, matching Cap's own colour scheme. Of course, it's a Harley and what else would it be? In the case of a guy called Captain America, you can forgive a little patriotism. 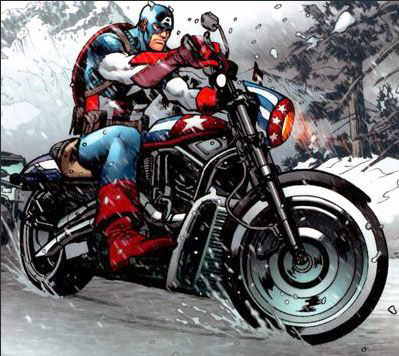 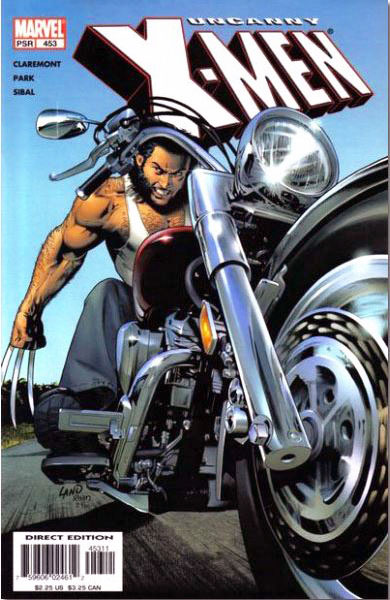 Something about Wolverine's character just demands he ride a motorcycle ... he just wouldn't look right behind the wheel of a minivan. The look is a good one. So much so that when the X-Men movies came along in 2000, the producers dropped some aspects of the comic-book source material, but made sure to include the motorcycle. 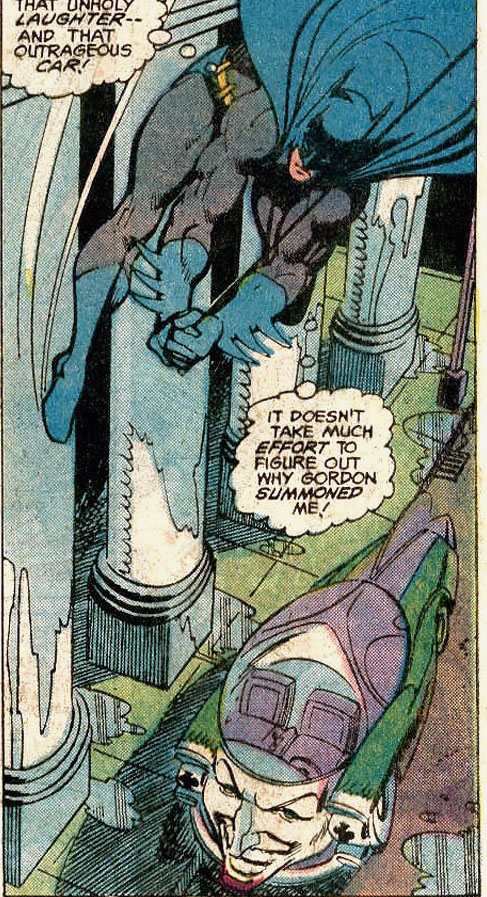 What's good for the Batman is good for the madman. Obviously tortured by envy, the Dark Knight's arch-nemesis acquired his own signature vehicle. And, you know, he had some good ideas. For one, the morning commute, no doubt, would be much more entertaining if we all had to drive around with giant versions of our faces on the front of our cars.