Once, they made fine road-going yachts - sumptuous velour-lined boats that rolled through the corners with a certain majesty.
Advertisement

Once, they made fine road-going yachts - sumptuous velour-lined boats that rolled through the corners with a certain majesty.

Once, they made fine road-going yachts - sumptuous velour-lined boats that rolled through the corners with a certain majesty. Unfortunately, it's been years since Lincoln lost its direction, steering 'round all points of the compass, dismasted and rudderless. Good news, shipmates, because here comes a shiny new ocean-blue liner; set a course for the lost island of brand identity.

Finally. Finally the Continental is back. It's the car everyone's been telling Lincoln to make for years: both a link to the past and a clear declaration of the future. Up until now, the brand has existed as little more than a trim level of Ford's existing product line; a little more chrome and leather and - hey presto - a Taurus is transformed to an MK-whatever.

The success of the MKC crossover might well have been the first few ripples on the water that presaged a coming gust. Consider this reborn Continental the wind filling Lincoln's sails once again and taking it out of the doldrums. It's beautiful, it's differentiated from anything the Blue Oval currently makes, and it looks distinct (inside and out) from anything offered by competitors like Cadillac. (Well, it actually looks a bit like a Jaguar up front.)

Speaking of Cadillac, which is launching their top-level CT6 flagship, Lincoln hopes to give their old enemy a few broadsides by way of taking a different tack on what luxury is. Where Caddy brings the big guns with their sport-oriented V-series cars, Lincoln intends to go a little softer. The Continental's demeanour is muted, not brash. It's soft and perhaps slightly feminine in silhouette, representing elegance over angularity.

The more you look, the better it gets. The door handles are like winglets moulded into the chrome strip along the belt-line, and they're electric-release. From the rear, Lincoln's signature LED lighting finally has the home it deserves, and the integrated exhaust is at once purposeful but not too aggressive.

However, if all the exterior chrome and giant multi-spoke wheels aren't enough of an enticement, then step inside the Conti's interior to find some unique touches. The choice of deep blue here gives an element of 1970s-style personal luxury you don't really find elsewhere. The seats look halfway between the Jetsons and one of the Golden Girls velour track suits. The deeply-piled carpets look like someone skinned Cookie Monster. The whole effect is like a future concept from the 1950s brought to life with modern construction.

Rear-seat passengers have a few extra goodies to play with - a natural home for a production version of the big Lincoln is the sedan-hungry Chinese market - such as a deployable laptop table and the ability to reposition the driver's seat forward (as you can do in the Hyundai Equus). There's a three-mode stereo system that incorporates active noise cancellation for an extra-quiet ride, champagne storage, and soft LED ambient lighting.

Nürburgring time? Who cares - the Continental is about smooth transport rather than ballistic performance. Power comes from a twin-turbo 3.0L V6, and yes there's a selectable sport mode, but expect adequate thrust rather than outright speed.

On today's snarled roads, that just makes sense. What's more, a halo car with clearly defined ideals is just the thing Lincoln needs - with the Continental, Lincoln itself makes sense too. Now, if they'll just build the thing... 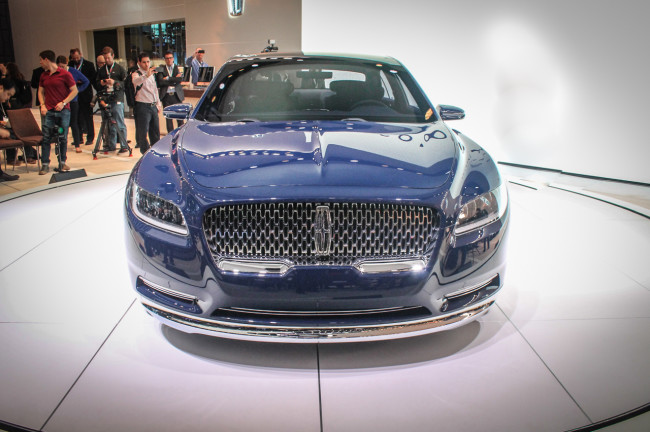