Originally introduced in 2003 to a combination of admiration and accolades, the Nissan Murano was a real leap ahead in the midsize SUV...
Advertisement

Originally introduced in 2003 to a combination of admiration and accolades, the Nissan Murano was a real leap ahead in the midsize SUV...

Originally introduced in 2003 to a combination of admiration and accolades, the Nissan Murano was a real leap ahead in the midsize SUV segment. Comparables – at the time, boxy and truck-like – immediately seemed dated when parked next to the curvy, modern Murano, one of the first “crossovers” to hit the market. It came with a standard CVT transmission, too, and that was also a first. Murano won the Automobile Journalists Association of Canada’s “2003 Best Truck of the Year” with ease, but some critics wondered how long the look would last.

The design lasted fundamentally unchanged for 12 years. It got a little longer and taller, but the first and second generation Murano had a long and successful run, their lines ultimately ageing well.

The 2015 model leaves the old Murano look for something quite different. It’s longer, wider, lower and lighter than the outgoing model, and it looks like (and is) a completely new vehicle. The new styling – dynamic and expressive, also found on the 2016 Maxima sedan – is setting the standard for all Nissan vehicles as updated models are introduced. Its “floating roof” is a signature feature.

Although it looks big, Murano fortunately drives fairly small. The 2015 Murano is easy to maneuver in close quarters and nimble enough on twisty roads. We drove one from Ottawa to New York City to attend the 2015 New York International Auto Show and found it an excellent long-distance tourer, very comfortable for three adults with luggage. Fuel consumption is officially expected to average 11.2/8.3/9.9 L/100 km city/highway/combined.

Murano comes in four trim levels – S, SV, SL and Platinum – with one engine: a V6 making a modest but sufficient 260 horsepower and 240 lb-ft of torque mated to the latest version of Nissan’s “Xtronic” CVT transmission. Ours was the $39,398 SL, though all Muranos also bear a $1,750 destination charge. 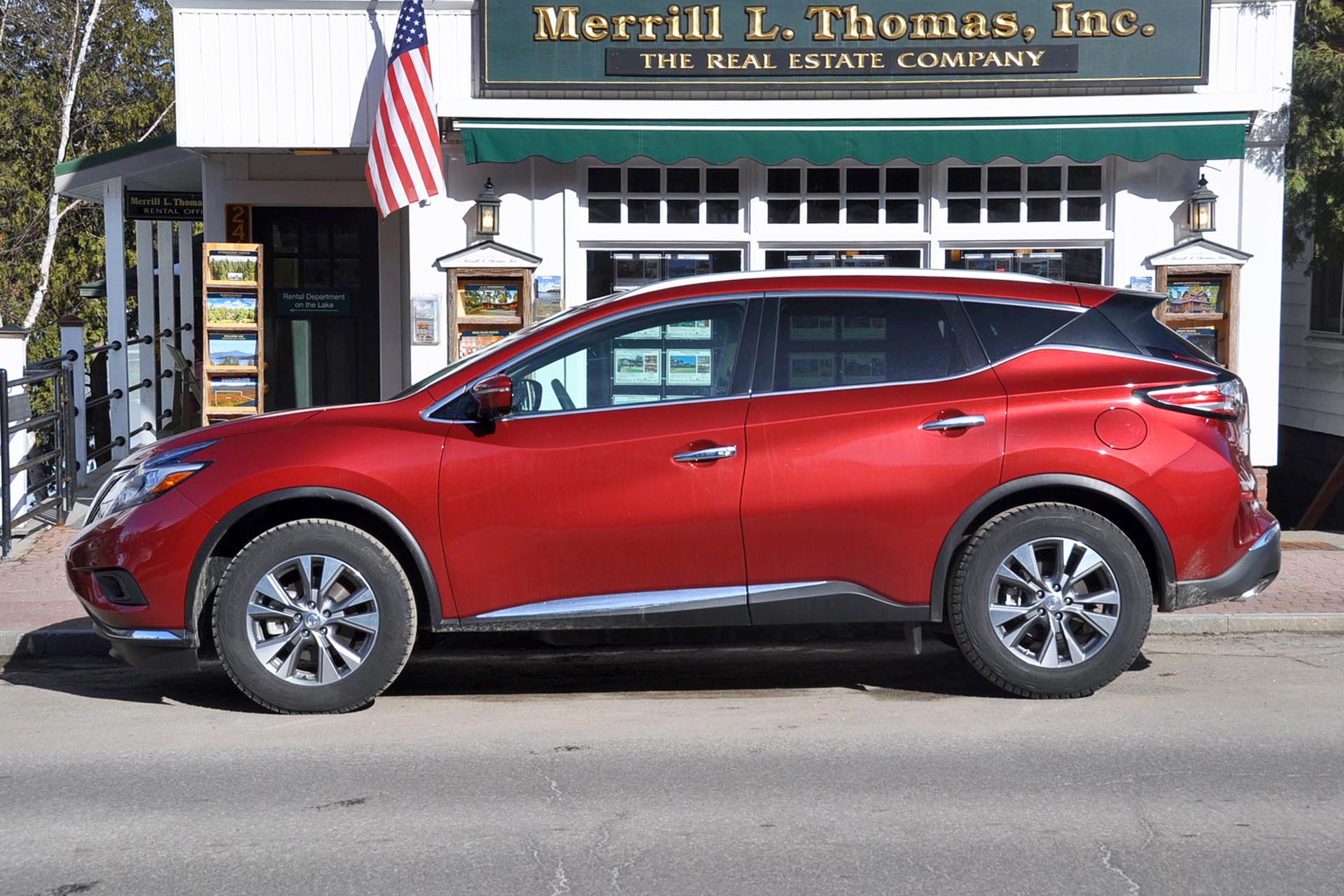 We were three adults driving the 700 km to Manhattan, the rear-seat passenger enjoying excellent legroom and all of us comfortable in Murano’s “zero-gravity inspired” seats. Suffice it to say that the seats are designed to reduce fatigue on long journeys and I found them exceedingly comfortable throughout. Not sure how Nissan has made a seat feel both soft and firm at the same time, but they seem to have done that!

So we arrived fresh at our hotel in Manhattan, which was located at 42nd Street West and Broadway. That’s Times Square, for the uninitiated; the ball that drops at New Year’s was right across the road.

The Knickerbocker Hotel was originally established in 1920 and in its heyday was home to stars such as Enrico Caruso (a famous singer) who used to live there back in the 1920s. However, most of the building’s life was spent as offices and it’s only now re-opened in February, 2015, the new owners attempting to revive its former glory as one of the finest establishments in New York.

The word “knickerbocker,” in case you’re wondering, used to refer to New Yorkers of Dutch origin (knickerbockers are shorts that Dutch people characteristically wore, so it was likely a term of some derision), then it came to refer to New Yorkers of all origins. It’s now an obsolete reference, but it is where the NBA’s New York Knicks get their name.

In order to recreate the Knickerbocker Hotel’s golden era, male employees (doormen, bellhops, etc.,) actually wear knickerbocker shorts, knee socks, floppy hats and plaid shirts with waistcoats. It is quite a sight and certainly something that you don’t see very often these days (never, in fact). It’s possible that most people have no clue what these employees are dressed up as, but it’s New York, and passersby don’t really pay much attention.

Me, I smiled politely and pretended not to notice.

Watching the Murano get taken to a distant (30 minutes notice, please) parking lot by the valet, I wondered why it should cost $55.00 per day with no in-and-out privileges. With the Murano’s “around-view” camera system that gives you a 360-degree view of the vehicle’s surroundings, we should at least get a discount for how easy it is to park. You can activate this as required, but it operates automatically when you’re in reverse. It’s a great feature that helps position the vehicle when parking and in order to see bicycles or pedestrians when you’re waiting at an intersection. Rear cross-traffic alert supplements the system with warnings of dangers when backing up.

Then I spied the Aston Martin Rapide S hotel shuttle car (they had two) and it all became clear. Turned out I would need shuttling quite frequently... 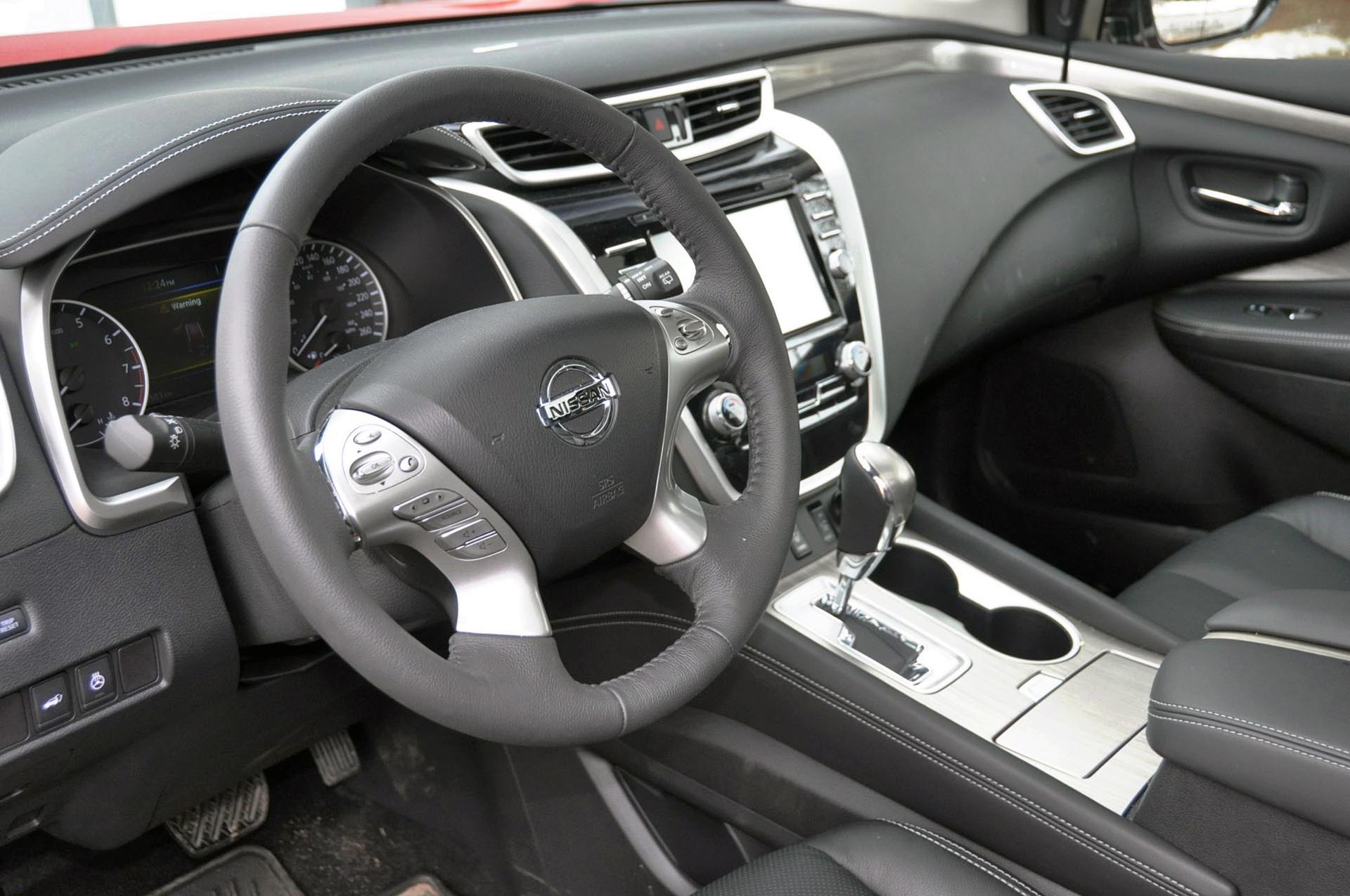 The hotel experience, and I won’t dwell on this but it does bear mentioning, was a comedy of errors. It’s a new place with new staff and little worked properly. The fire alarms went off every ten minutes from 4 am until 6 am; the elevators broke; after a half-hour wait, the valet returned with the wrong vehicle (not the Aston Martin, in which case I would have said “Thanks” and left). You can’t believe how apologetic and exceedingly nice the staff were, but the hotel was definitely in “beta” mode.

Check the autoTRADER.ca coverage of the 2015 NYIAS and you can see by the volume of articles that it was pretty much all work and little play, but some journalists did get to go to pizza school one evening, rather than just heading out to a restaurant. Courtesy Nissan Canada, the Pizza a Casa teaches you how to make your pizza from scratch (dough and all). I won’t go into the finer points but smoked mozzarella cheese is killer on a pizza, while Brussels sprouts surprisingly can have a role).

After attending the media days at the show and covering the new Infiniti QX30 Concept, the latest Infiniti QX50 and the all-new Nissan Maxima among others, our Murano was returned to us covered in dirt, dust and bird poop. Do you tip when that happens? (don’t get me started on tipping...).

Despite numerous safety and convenience technologies standard or available as options for the Murano, like blind-spot warnings, frontal collision warning, lane departure warning or the aforementioned around-view system, apparently there is yet no defense against bird poop. Self-cleaning paint can’t come soon enough. 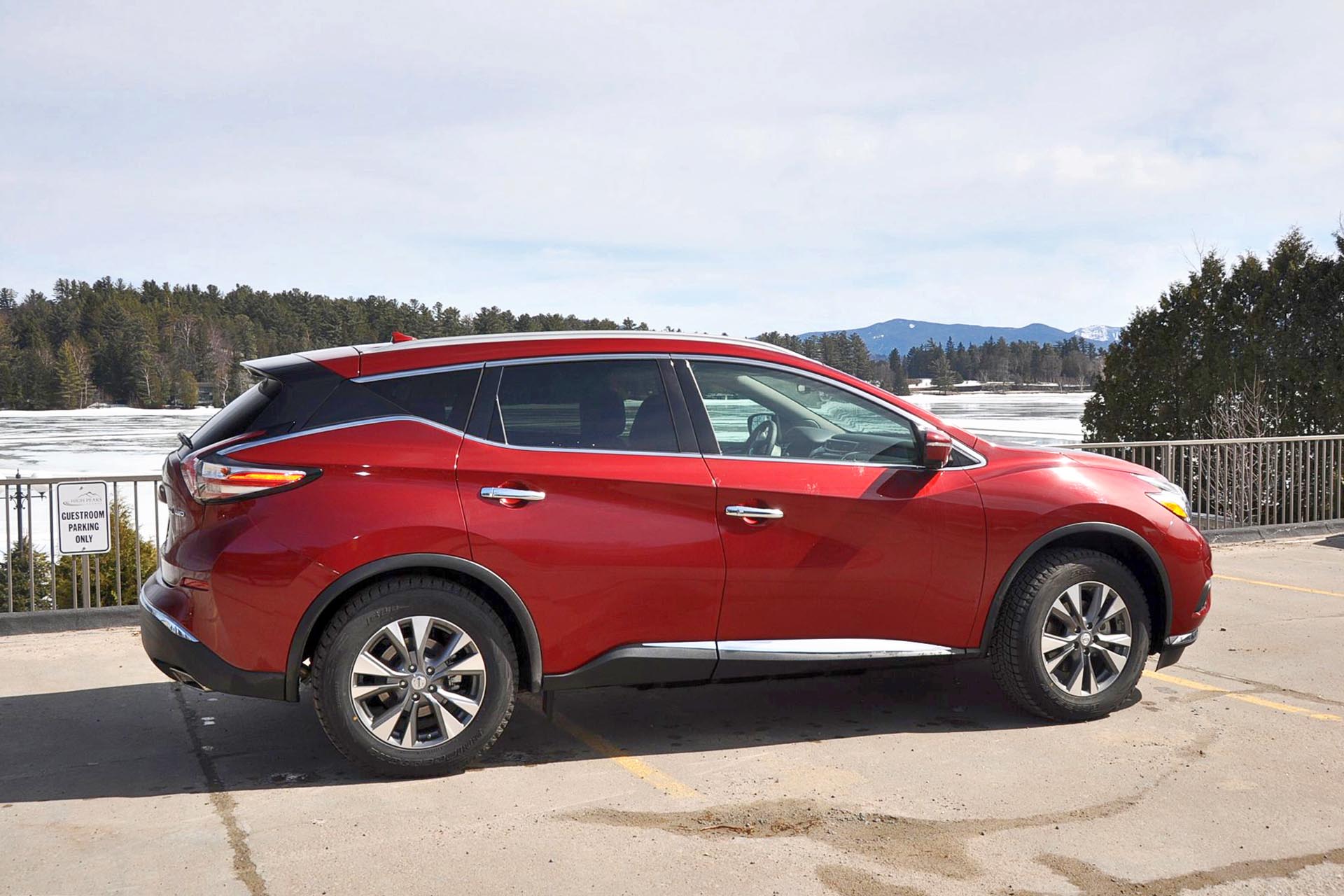 The drive home took us back up the I-87, exiting at Route 9 for Schroon (pronounced Scroon) Lake, where we found The Tumble Inn B&B with charming hosts Nancy and Larry, a fantastic bed, beautiful views and a great breakfast. A well-oiled machine, it was all perfect, parking was free, and in the evening we had a wood fire in the fireplace and a nice glass of wine. Such a contrast to the sensory overload of Times Square!

Craft beer is everywhere, you may have noticed, and Schroon Lake is no exception. In the morning we backtracked a couple of kilometres to the Paradox Brewery, which although they were closed, hosted us for a tasting anyway. Established in 2013 and like most of these new, local brewers, they “Can’t make enough,” according to Head Brewer Devon Hamilton. Specialties are their IPAs (Beaver Bite, Overbite), Stouts (Classic, Dark Bay) and Seasonals (Black Fly Porter, Belgian Triple Ale). Highly recommended, if you’re in the area. I should have bought more.

Schroon Lake is long and picturesque, but Route 9 is virtually devoid of cars in early April. The Adirondack tourists and summer cottagers have yet to arrive and some of the towns (Lake George for instance), have barely a single store open at this time of year. The road is smooth and undulating as it describes the lakeshore, the Murano comfortable and super-quiet. Every once-in-a-while you see a classic car tucked into an open garage or wintering under a car port. A white 1970s Corvette blended in with the snowy surroundings, a first-generation Corvair could be seen in a garage. Could have been a Chevy dealer around at one time.

Driving a vehicle for an extended period, you do become a bit more attuned to its idiosyncrasies. For instance, while the autolock system locks the doors as you accelerate, it doesn’t unlock them until you turn the engine off. It’s a small thing, but inconvenient for passengers, I found. You can disable the autolock feature altogether, but you can’t, apparently, keep the system on, but choose to have it unlock the doors when you put the vehicle in Park. 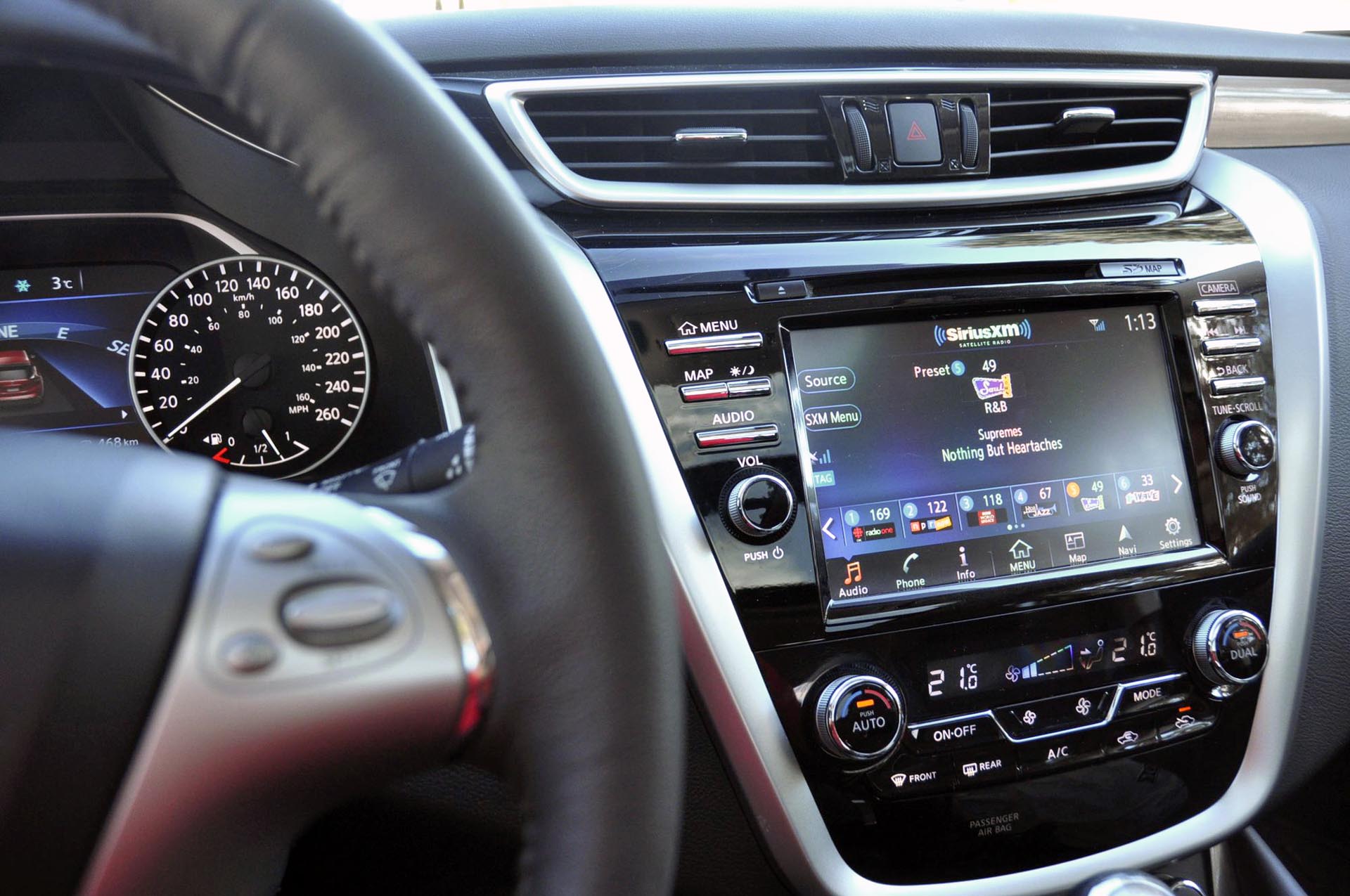 The driver interface (the word “dashboard” may now be obsolete...) is simple to use in the Murano. It’s basically knobs and buttons supplemented by a touchscreen display.

Some of steering wheel controls, however, especially the audio volume, are not conveniently located and are hard to identify. All the buttons are smooth and nicely contoured, but your fingers can’t really tell most of them apart. Even after 1,500 km, I sometimes still had to look at those controls to identify them.

The steering wheel has a matte plastic trim piece on either side of the bottom spoke (it has three spokes) the back of which is not finished. It’s abrasive, actually, giving the steering wheel a cheap feel. Given that one’s hands are on this device all of the time, the driver should enjoy the feel of it. At least it is heated for cold mornings.

The navigation system was helpful and the voice activation system worked well enough. You still have to go through several levels to input an address, though, and while the traffic alert system did helpfully vocalize that there was “flooding 62 km ahead,” this warning wasn’t visible on the display, nor was further information ever provided. We took a chance, and never did encounter flooding.

The Murano SV’s power liftgate is a great feature. Cargo capacity is vast, even with the rear seat up, and the cargo floor is low enough to make loading and unloading easy. The seats continued to impress and handling on the twisting Route 9 was flat and controlled. On the higher-speed interstates there was virtually no road or wind noise. As I say, a fine cruising vehicle, but there’s less “sport” in this SUV than there is practicality. And style, I suppose. A Stylish Utility Vehicle! 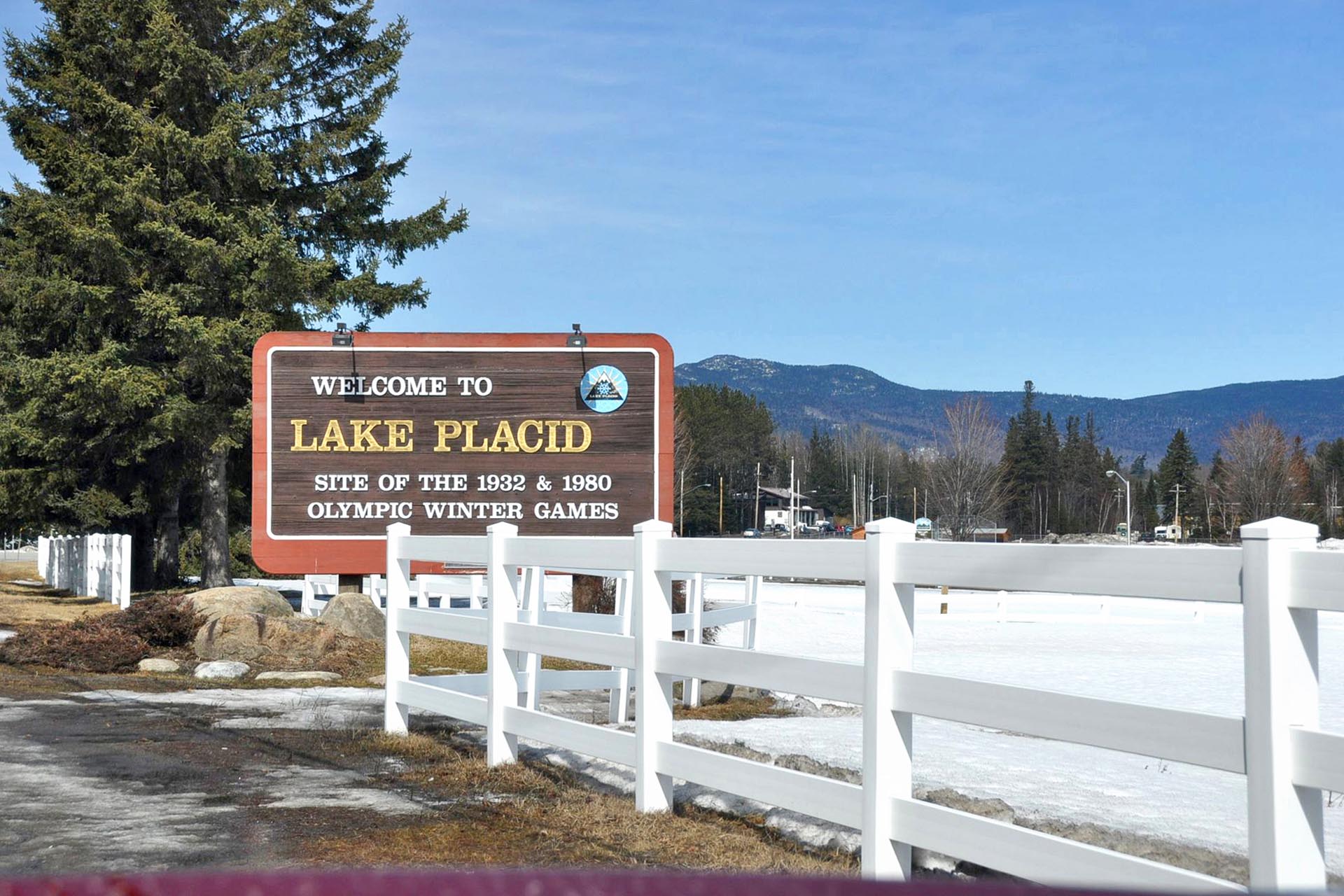 Our last stop before heading home was in Lake Placid, site of the 1932 and 1980 Winter Olympics. The tower for the ski jump is still there, although it’s now an observation deck that they charge $10.00 to ascend. You have to pay even if you only want to take a picture of the tower. No picture, therefore.

Lake Placid’s a nice town, though, with lots of shops and restaurants backing onto the smaller Mirror Lake (check out The Cottage at Mirror Lake Inn. Great patio.). It’s easy to while away the time although shopping in the US is no longer as advantageous for Canadians as it was.

Fortunately for road travellers, gasoline seems to be priced as it was a decade ago in much of New York. With those prices (we actually saw $2.09 a gallon at one station; converts to $0.65 per litre, Canadian), the 2015 Nissan Murano was beyond economical to drive.

However, even at Canadian prices, the Murano’s 9.5 L/100 km fuel consumption for the 1,500 km road trip, while not matching the projected estimates, was very good for a vehicle of its size and power.