On Track in a Jaguar and… Land Rover! Typically when you see a Land Rover and a Jaguar together at the race track, one has been used as a tow vehicle for the other – a fitting...
Advertisement

Typically when you see a Land Rover and a Jaguar together at the race track, one has been used as a tow vehicle for the other – a fitting...

Typically when you see a Land Rover and a Jaguar together at the race track, one has been used as a tow vehicle for the other – a fitting pairing of two British icons each recognized as being at the top of their respective luxury and performance games. How strange, then, to be at the Monticello Motor Club with the 2015 Land Rover Range Rover Sport SVR parked alongside the 2016 Jaguar F-Type R AWD, each awaiting the signal for pit-out that will see them sharing the same road course.

A track-ready Land Rover might seem incongruous next to the latest iteration of Jaguar's lauded sports car, but Jaguar Land Rover's Special Vehicle Operations team is hoping to change your mind about that. That's why they've invited me here to Monticello, New York, to demonstrate the full range of capabilities of the Range Rover Sport SVR and at the same time show me via the F-Type that all-wheel drive isn't just for SUVs.

Range Rover Sport, Turned Up To 11 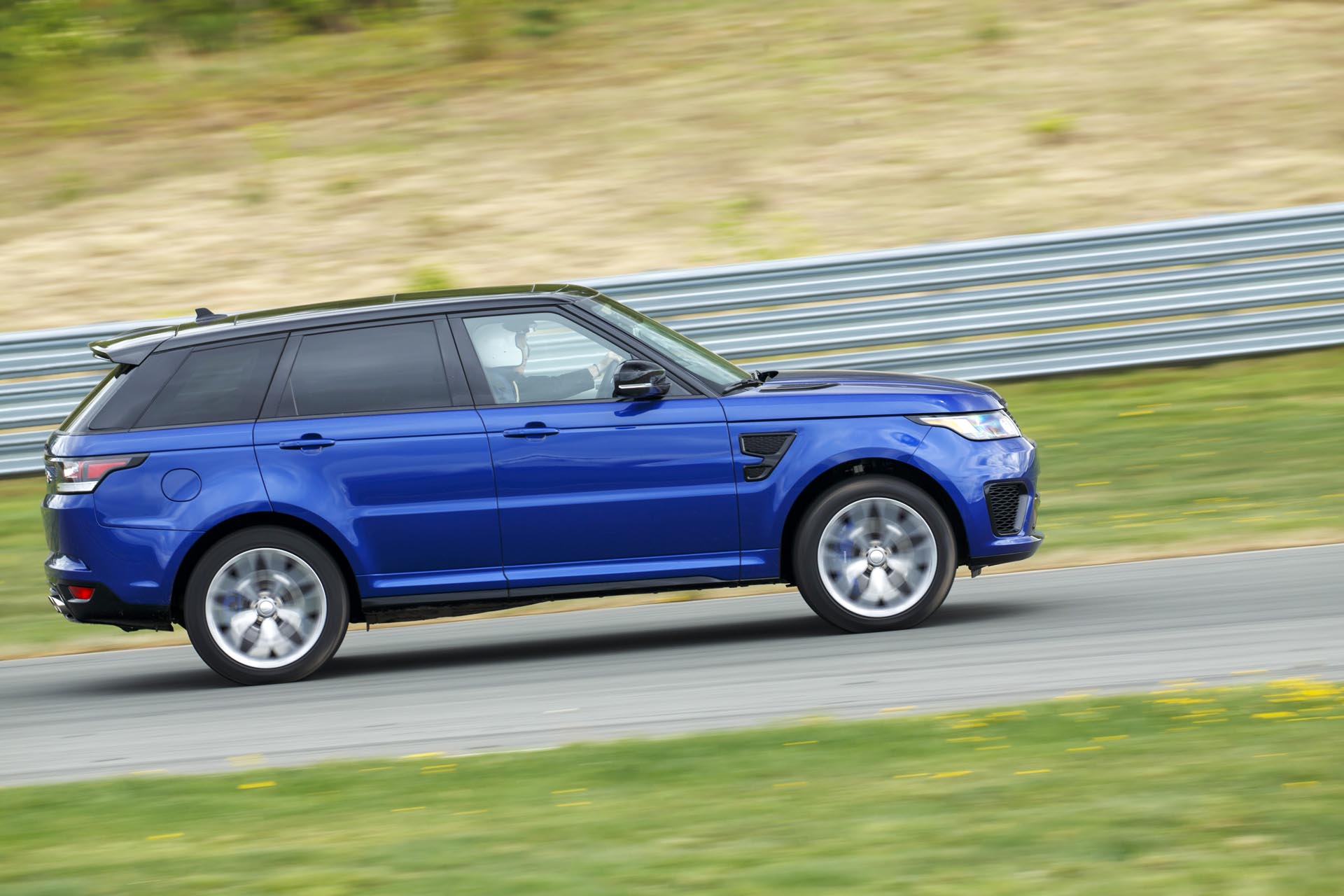 Land Rover has built its reputation on a foundation of off-road acumen and startlingly lush passenger cabins dripping with luxury. The 2015 Land Rover Range Rover Sport SVR maintains these twin legacies while proposing a third leg for what the brand hopes will soon become a tripod of talents for Special Vehicle Operations products: high-performance shenanigans. While one could argue that the existing Range Rover Sport Supercharged is already more than enough truck, what with its 510 horsepower, supercharged 5.0-litre V8 and its aluminium-intensive chassis keeping it lighter on its feet than its 2,300 kilogram curb weight would suggest, the SVR takes things in an even more extreme direction in a bid to curl your toes at the sight of the next bend in the road.

Specifically, the Range Rover Sport SVR jacks up its eight-cylinder engine output to 550 horses and 502 lb-ft of twist, significantly reduces shift times for its eight-speed automatic gearbox, increases the stiffness of most of its suspension hardware, installs a brake-based torque-vectoring system, and adds a new 'dynamic' mode to the Terrain Select system that controls a long list of vehicle parameters, including the power-distributing talents of its standard four-wheel-drive system. Oh, and the SUV also bears the requisite interior and exterior styling flourishes that not-so-subtly signal that you've paid a hefty premium for the privilege of driving this well-endowed beast.

Get Out Of The Way 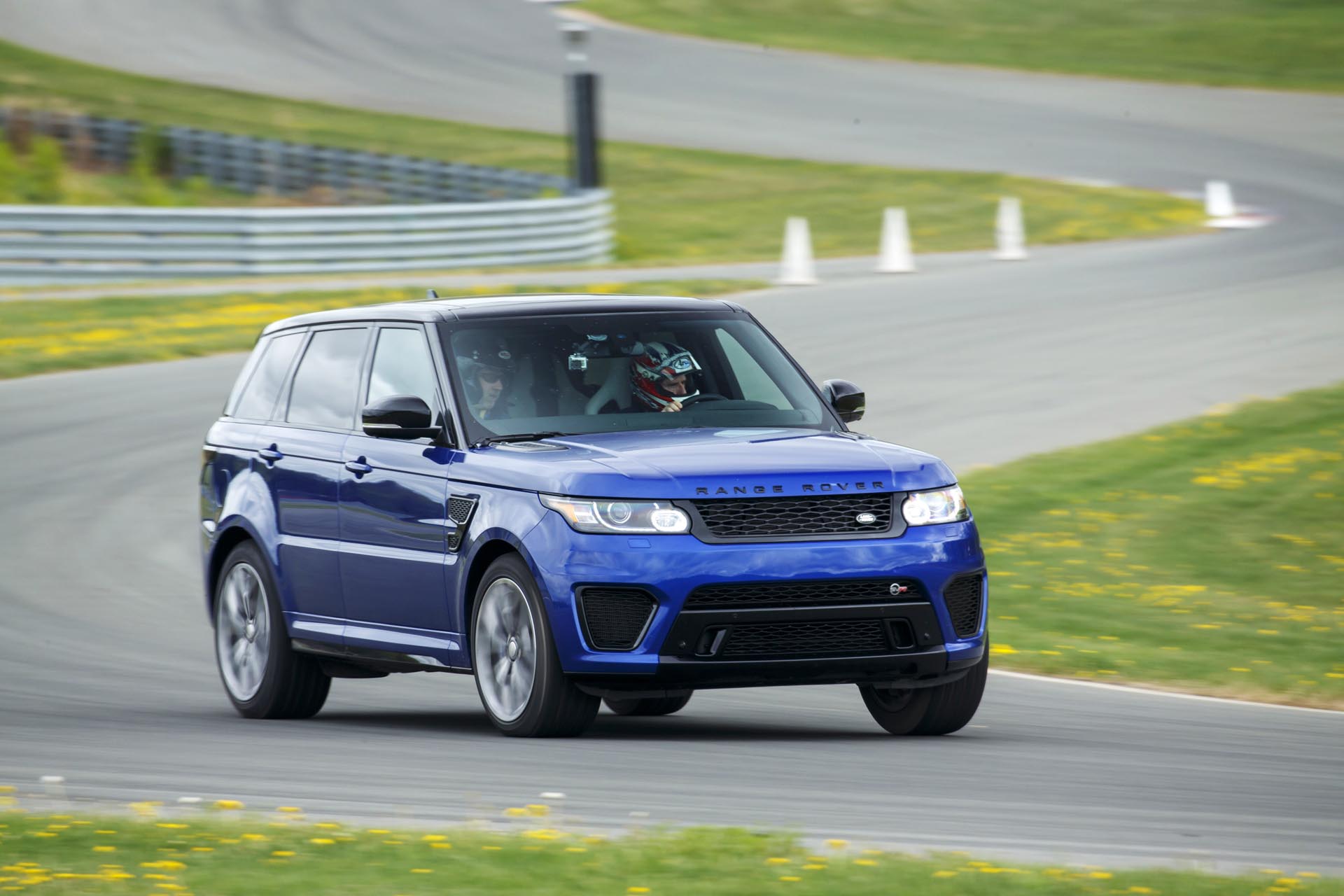 Rolling past the blend line and into the first short straight on the abbreviated Monticello circuit (the full course has been split in half to accommodate both the Jaguar and the Land Rover simultaneously), the Range Rover Sport SVR quickly convinces me that it has the guts to devour linear feet of asphalt with a complete disregard for the laws of physics. The deep bark of its active exhaust system as the transmission downshifts on braking for the next corner could strip paint from a double-yellow line, and I can feel the SUV's four-wheel-drive system scrambling to assign torque via its dynamic rear differential once I get back on the throttle and demand a second helping of forward thrust.

The sensation is not altogether unpleasing. Unlike other hi-po sport-utility vehicles, the Land Rover's more transparent suspension and drivetrain efforts translate into an approximation of road feel that's missing from most of its M and AMG rivals. The body roll and ‘will they or won't they’ fade resistance of the brake pads, each system so dramatically fighting against the sheer mass of the SVR, add a twinge of reality to what is otherwise such a fantastical concept. 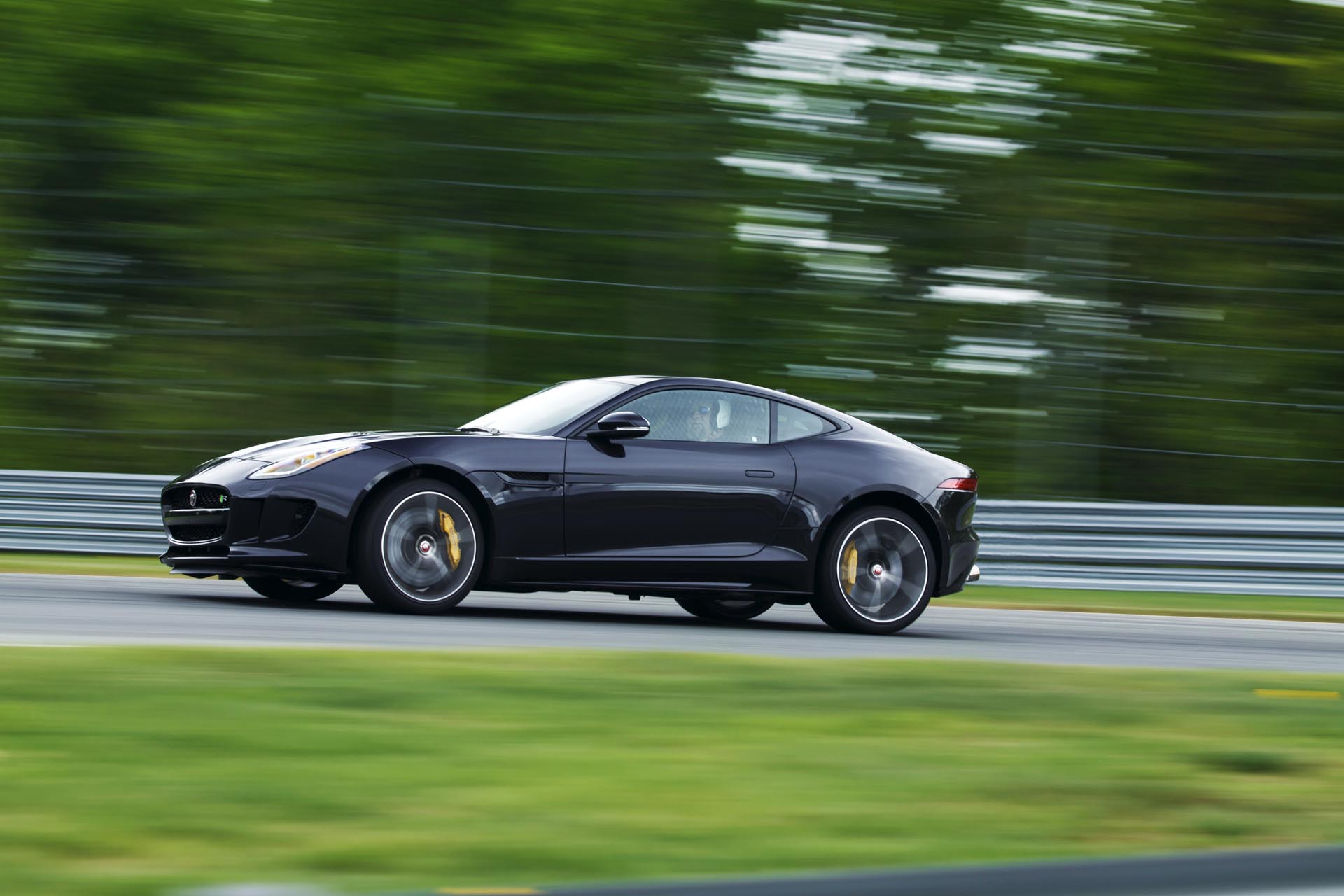 The 2016 Jaguar F-Type R AWD might not offer the exclusivity of an SVR badge (that comes later, according to Special Vehicle Operations planners), but it does feature four-wheel traction for the first time in the F-Type family. While this sadly deletes the availability of a rear-wheel drive model at the apex of the sports car's lineup, it does normalize things at the top, with both convertible and coupe models now featuring the same 550 horsepower, supercharged 5.0-litre V8 that develops an identical 502 lb-ft of torque (as compared to last year's less-mighty V8 S drop-top).

Despite its similar output, the mill under the hood of the F-Type R AWD has been tuned to deliver its prodigious torque much higher in the rev range as compared to its Land Rover cousin, and this is reflected by the distinct rasp of its also-active exhaust, particularly off throttle. Able to stretch its legs on the longer section of the two-part Monticello road course, the F-Type AWD reveals a less-rambunctious side than its rear-wheel-drive predecessor, its eight-speed automatic changing cogs as quickly as some dual-clutch units on its quest to bury the speedometer as far to the right as possible.

Gone are the sweeping drifts through wide corners and in their place is a resolute determination to stick to the pavement at all costs. That being said, the all-wheel-drive system's tuning plays a significant role in preserving the car's new electric power steering feel, divvying up torque so that the front axles are only called into play on launch, or when sinking their rubber claws into the tarmac so as to rocket out of a corner with absolute stability. In fact, the rear differential's torque-vectoring capability creates a unique pivot point that allowed me to rotate, rather than slide the Jaguar closer to a corner's apex by merely reducing throttle input at key moments. “Slow in, fast out” has long been the mantra of many a successful track day champion, and the F-Type AWD R's willingness to explode down a straight with remarkable poise puts a distinct accent on the latter half of that credo. 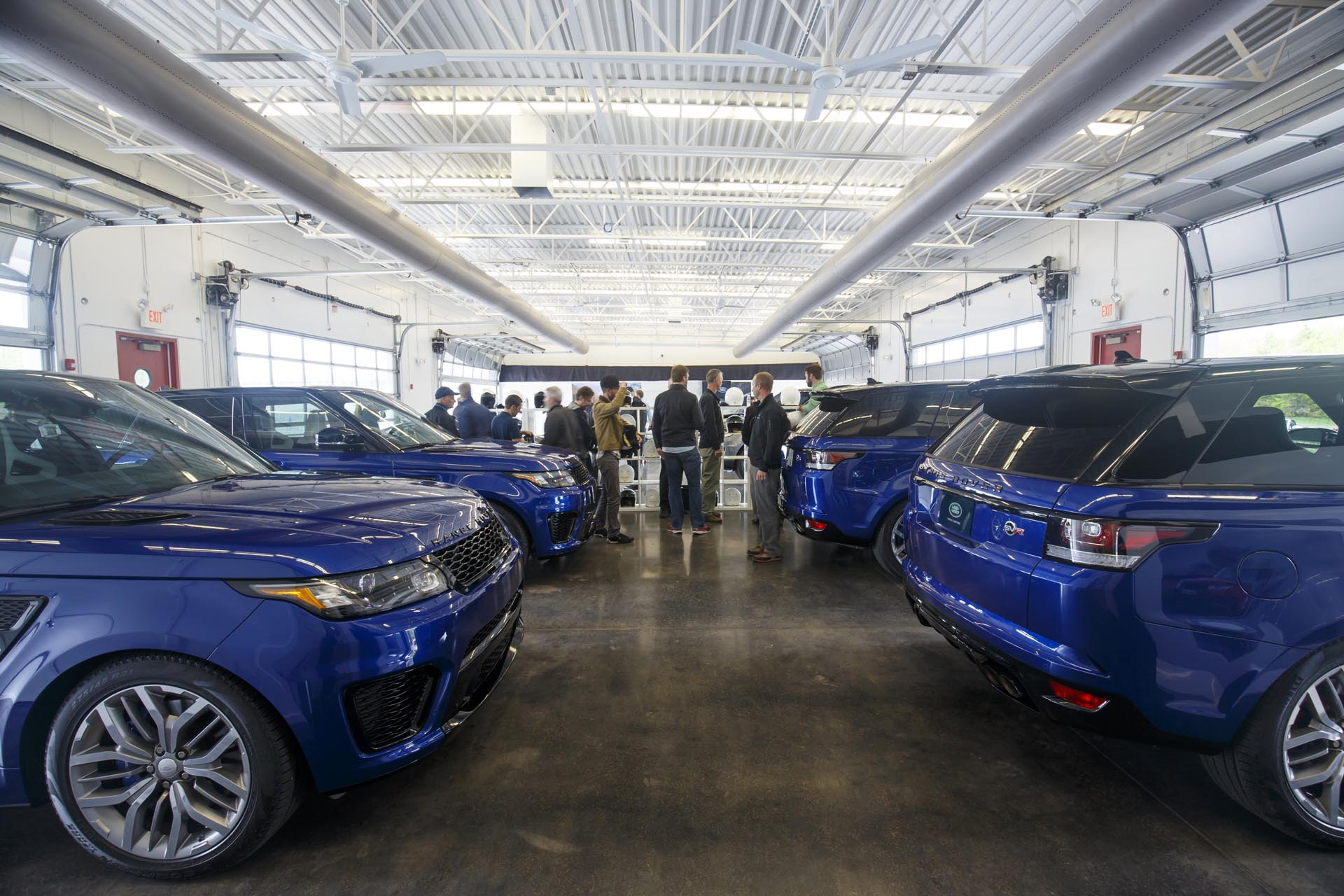 Separated by 600 kilos and diametrically opposed centres of gravity, it's perhaps no surprise that the 2015 Land Rover Range Rover Sport SVR and 2016 Jaguar F-Type R AWD feel like night and day when asked to turn in competitive lap times. Although competent and more engaging than many of its rivals, the SVR's ‘everything looks like a nail’ approach to performance doesn't quite translate into fun on a road course, especially if you're the one footing the bill for brakes and tires every weekend.

The F-Type R AWD, on the other hand, demonstrates that it's possible to make a philosophical change to an already-successful car's drivetrain and have it pay dividends in a track environment. What visceral sideways thrills may have been lost in the transition to all-wheel drive have been more than made up for with increased dynamic control for the average driver, and while your right brain might shed a tear for all the smoke-shows and donuts that will never be born into this world at the hands of a Jaguar pilot, your left brain certainly won't mind bragging about how many seconds you knocked off your session once you've traded up to the 2016 model.