A look at scoops, ducts, spats, and the world of go-fast aerodynamics with two fellas from SRT
Advertisement

A look at scoops, ducts, spats, and the world of go-fast aerodynamics with two fellas from SRT

Before anyone knew what aerodynamics were and how to use them, car engines started up via crank handle, gasoline was cheaper than air, and vehicles could be about as aerodynamic as a wood-shed, and nobody knew, or got concerned, or cared.

Today, aerodynamics play a huge role in fuel efficiency, performance, noise levels and more. Cars are designed with help from super-smart aerodynamicists, who spend years in school learning about turbulent boundary layers, drag coefficients and computational fluid dynamics (air is a fluid—who knew!), as well as plenty of other neat things about the stuff air does when a vehicle moves through it.

When a vehicle moves through air very quickly, things get even more interesting. Below, we’ll take a look at the basics of aerodynamics, and a look at some of the wicked-cool aerodynamic implements that capitalize on air flow in some of today’s fastest performance cars.

Special thanks to Terry England and Mark Trostle for the input below. Terry is the managers of Aero-Thermal Development and Mark for Design, both at Chrysler’s go-fast SRT division. These fellas are responsible for the scoops, ducts, humps and flaps you see on Vipers, SRT8s and Hellcats.

The teardrop shape is important, because Mother Nature says so. Think of it: a raindrop was the first-ever example of aerodynamic performance, long before mankind ever walked the earth with his grubby feet.  Thing is, the commonly held idea that a teardrop is the most aerodynamic shape ever is a bit of an oversimplification. Raindrops are typically just spherical in shape, but for a car design, which drives through the air rather than falling through it, the teardrop idea stands.

Terry England comments, “The teardrop is still the most aero-friendly shape for a vehicle, because it allows the air to remain attached, providing minimum impact to aerodynamic drag.”
Of course, cars that look like teardrops would look dorky and have numerous compromises, so people like England have to get a bit more creative. 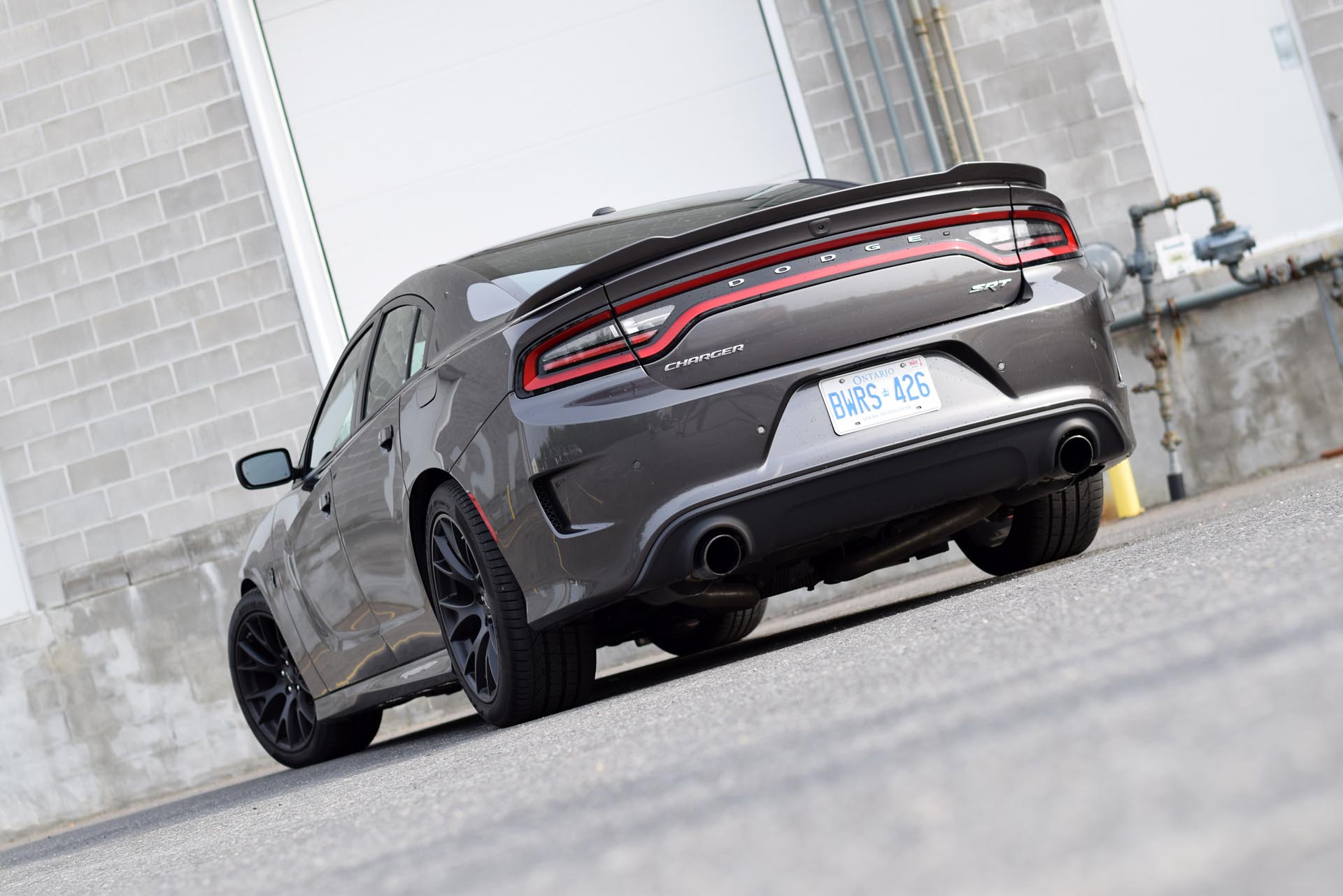 Since you virtually can’t make a vehicle teardrop-shaped, engineers and aerodynamicists employ other, often-common tricks, to help their rides slip through the air with ease.
These include things like tire spats, which are little plastic flaps mounted ahead of the tires to clear a path in the air for the tire to pass through, decreasing drag. Closeouts are also used underneath the vehicle, and typically amount to plastic or metal panels that cover and seal areas where air passing beneath might try to get caught up, creating more noise and drag.

Mark Trostle adds that controlling how air releases from the surface of the car is important, too. “Having certain radius sizes used on corners, and certain hard edges on the rear of the vehicle in order to have the air ‘break away’ from the car also helps.” 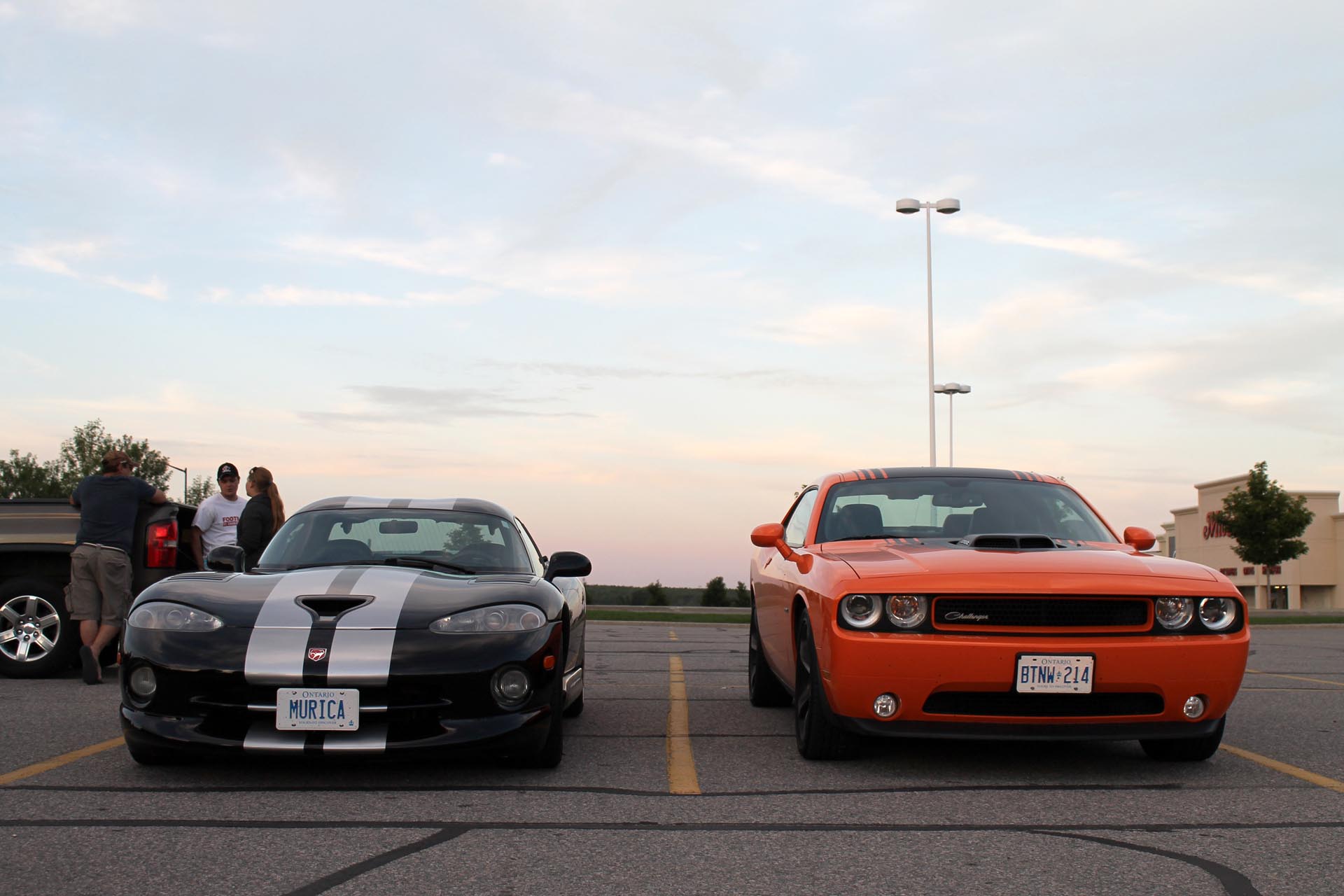 Trostle comments “Customers want their vehicles to be unique and have their own style, so the desire to make a vehicle unique or exclusive becomes more difficult as there are certain elements that drive a shape to be aerodynamic, which in turn can make a vehicle look common or familiar. We spend many development hours in the wind tunnel refining the clay models to keep the designs looking fresh and new, but also achieving the necessary aerodynamic targets.”
Translation? Making a new vehicle design aerodynamic is a fine balancing act, which requires innovation, practice, and creativity in applying new and old tricks in unique ways.

How Important are Aerodynamics to Fuel Efficiency? 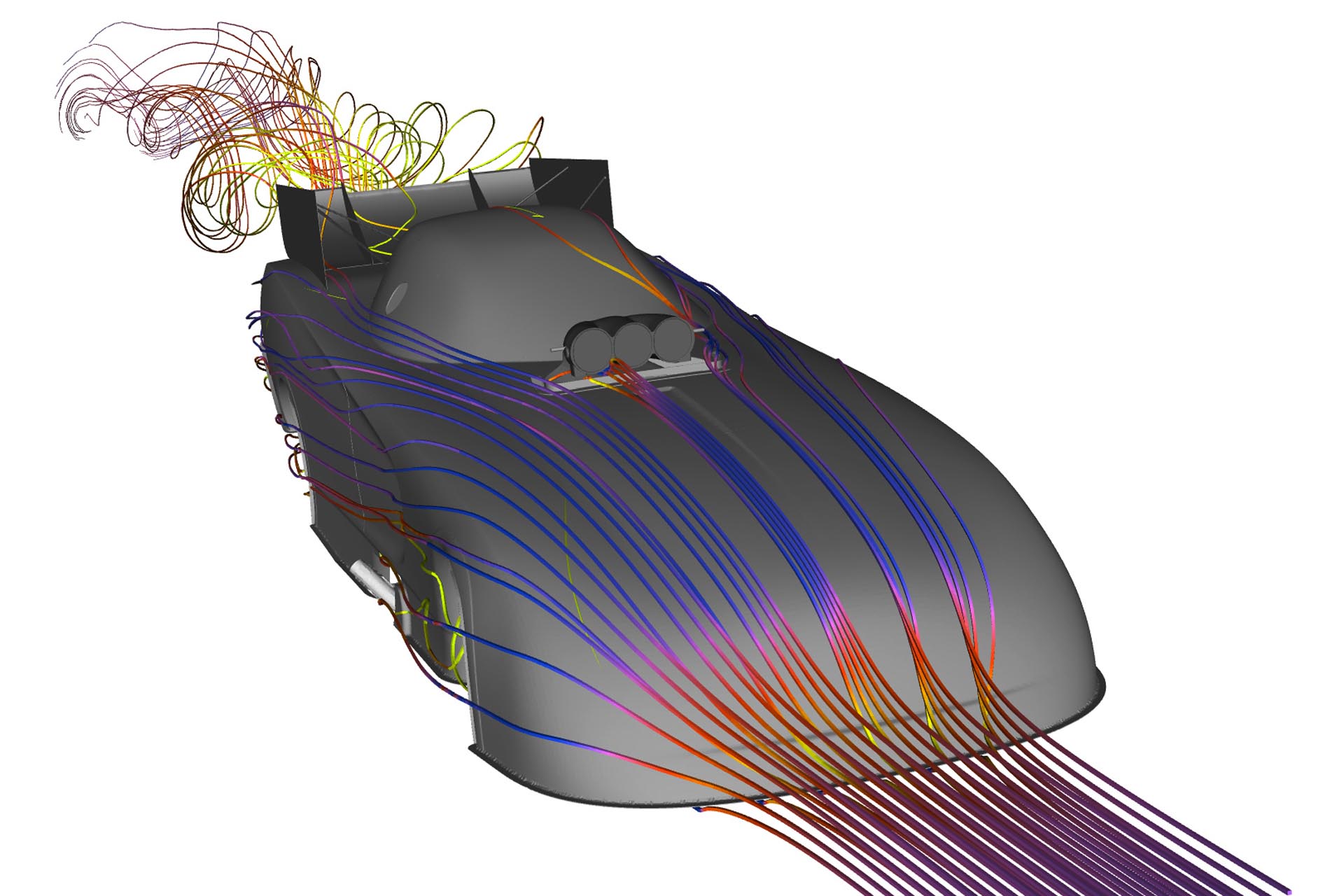 There’s no silver bullet when it comes to making a vehicle fuel efficient. Engine technology, aerodynamics, weight, driveline calibrations and tires need to be balanced out against the vehicle’s performance targets, size, comfort levels and intended capabilities. There’s no single, do-it-all way to achieve maximum fuel efficiency, and aerodynamics are just one part of the puzzle. 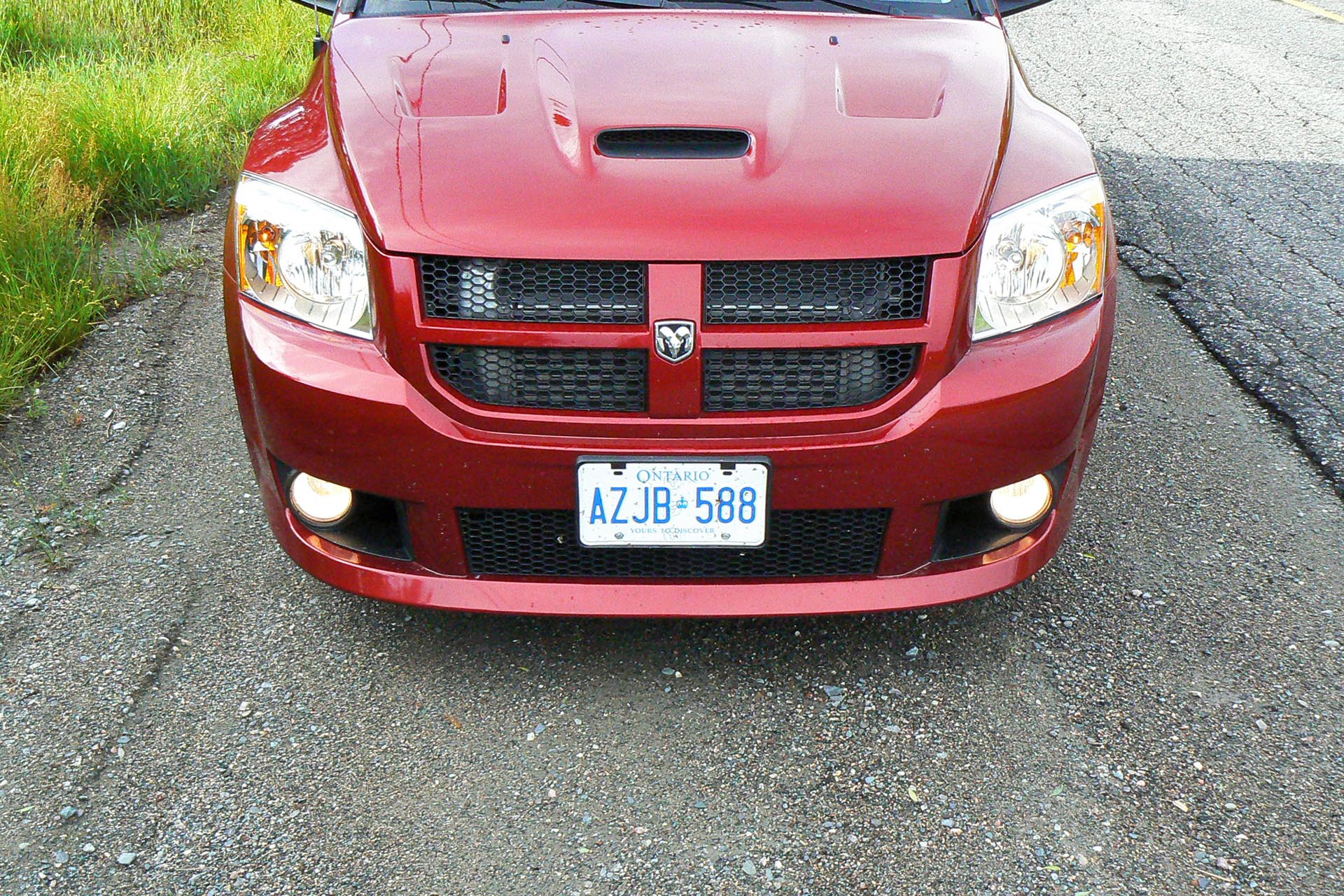 For an aerodynamicist working to meet performance, down force, cooling and fuel-efficiency targets, every part of the vehicle is a puzzle waiting to be solved. A few areas are common sources of extra head-scratching and overtime in the wind tunnel.

“The grille opening area always provides a challenge,” England comments. “The aerodynamicist needs to balance the need of providing a low-drag vehicle, and also to be able to provide ample airflow for cooling.”

Remember when we mentioned that aerodynamics are a balancing act? Here’s a powerful case in point: ideally, there’d be no opening in front of the vehicle at all—but then the vehicle would overheat. On a high-performance model like a Dodge Viper or Charger SRT Hellcat, the cooling air doesn’t just work on the radiator to keep the engine cool, either. Transmission coolers, heat exchangers, power steering coolers and even brakes all draw on the supply of fresh outside air, adding to the challenges. Turbocharged models typically add intercoolers, another form of heat exchanger, to the front grille area, too.
Smaller parts can be optimized for incremental improvements to drag. “Mirrors, door handles, roof racks and even wheels can all contribute to making a vehicle aerodynamic. In older cars, many components of a vehicle's undercarriage would hang down below a vehicle, such as exhaust systems and suspension parts. The more we keep those out of the air flow, the more reduction we can make on overall drag,” adds Trostle. 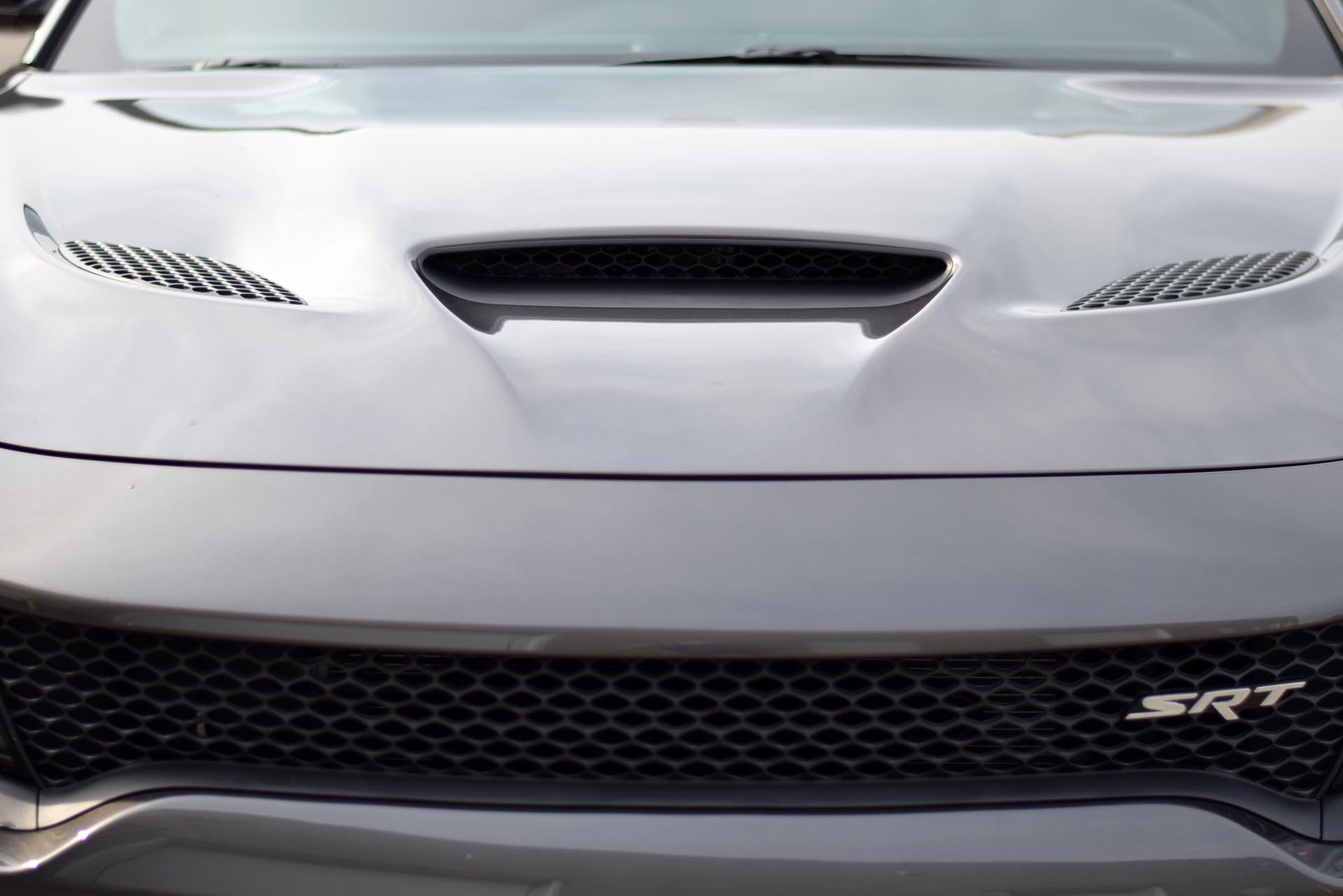 Aerodynamics aren’t just used to make a car slip through the air: they can be used as a powerful tool to help keep a performance car cool.

With a little ingenuity and some heat extractors, air can flow with relative smoothness through the front grille and cooling system provisions, then around the engine and out the top of the hood. This allows more air volume through the heat exchangers and radiator, and can reduce aerodynamic lift, which helps improve handling and lap times.

Terry England explains: “The hood extractors on both the Hellcats and Viper serve two purposes. First they allow heat to be extracted from the engine compartment, and second, they help reduce the amount of front aero lift on the vehicle”.

“And they look fantastic!” Trostle adds. “It’s form and function, working together.”

The underlying idea is simple: let air flow through the engine compartment, rather than cramming up inside of it, and you enhance cooling and handling at the same time. 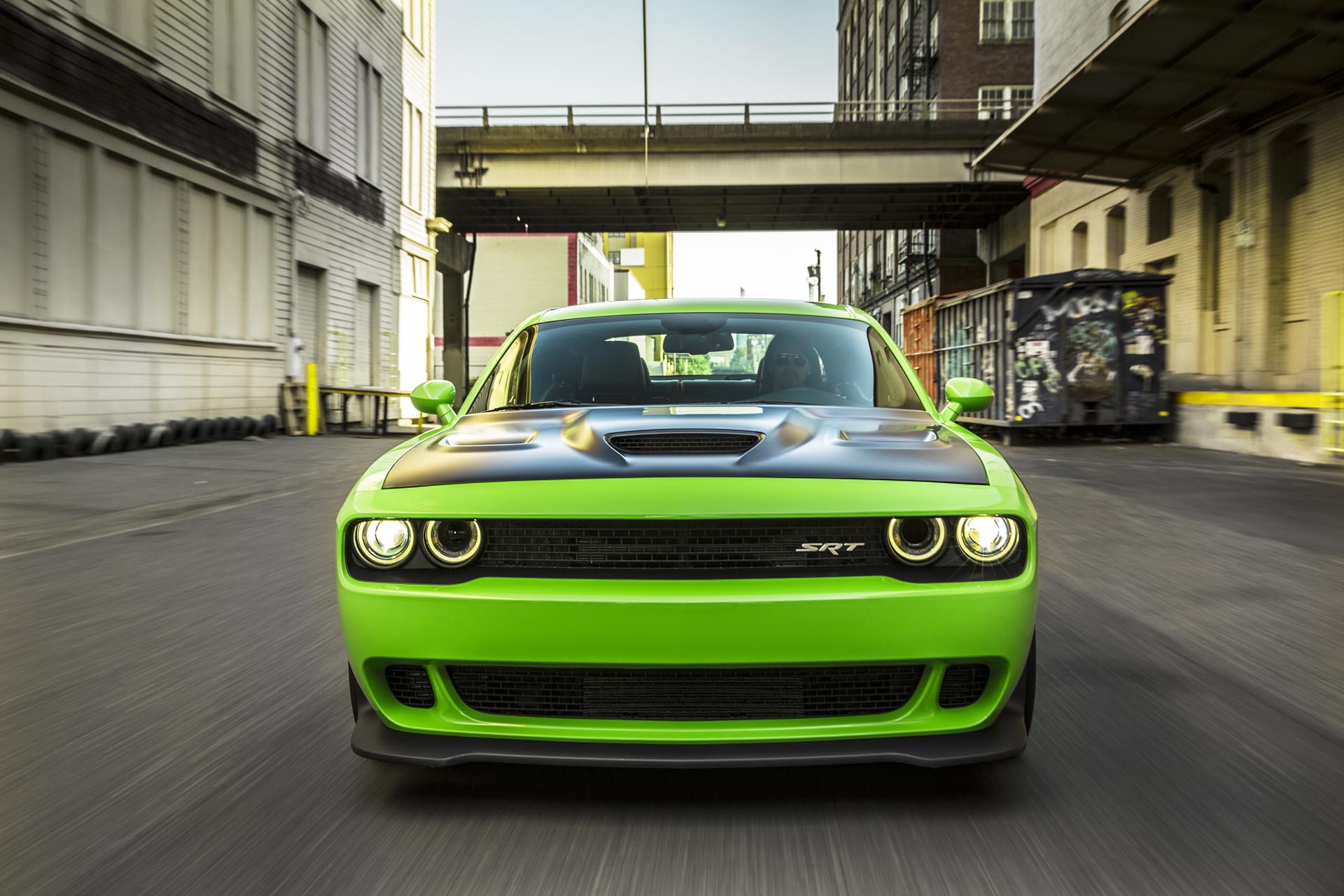 In most cases, big-power cars with spoilers and splitters aren’t using them for decoration. A front splitter, whether mounted on its own or integrated as part of the bumper, manages the transition in the flow of air between air that’s outside of the car, and air that’s flowing beneath it. When air meets the front end of a fast-moving car, it bunches up, becomes denser, and causes drag. This happens at, and under, the front end. With a splitter, a low-pressure air pocket is formed just in front of and beneath it, giving the faster-moving, high-pressure ambient air a clean, straight path through the underside of the vehicle, rather than causing it to bunch up and create lift. This improves overall aerodynamics and improves handling.
A spoiler works on similar principles, but on the rear of the car. Air hits the spoiler, pressing downwards against it, before it breaks away from the car. This creates downforce at speed, helping push the back of the car down. Though spoilers create drag at the same time as they generate downforce, they allow a vehicle to grip as if it was heavier, but without actually being heavier.

It’s all part of an aerodynamic balance specified in the vehicle’s production design. Both the front splitter and rear spoiler assist the aerodynamicist in balancing the vehicle’s overall aero performance. 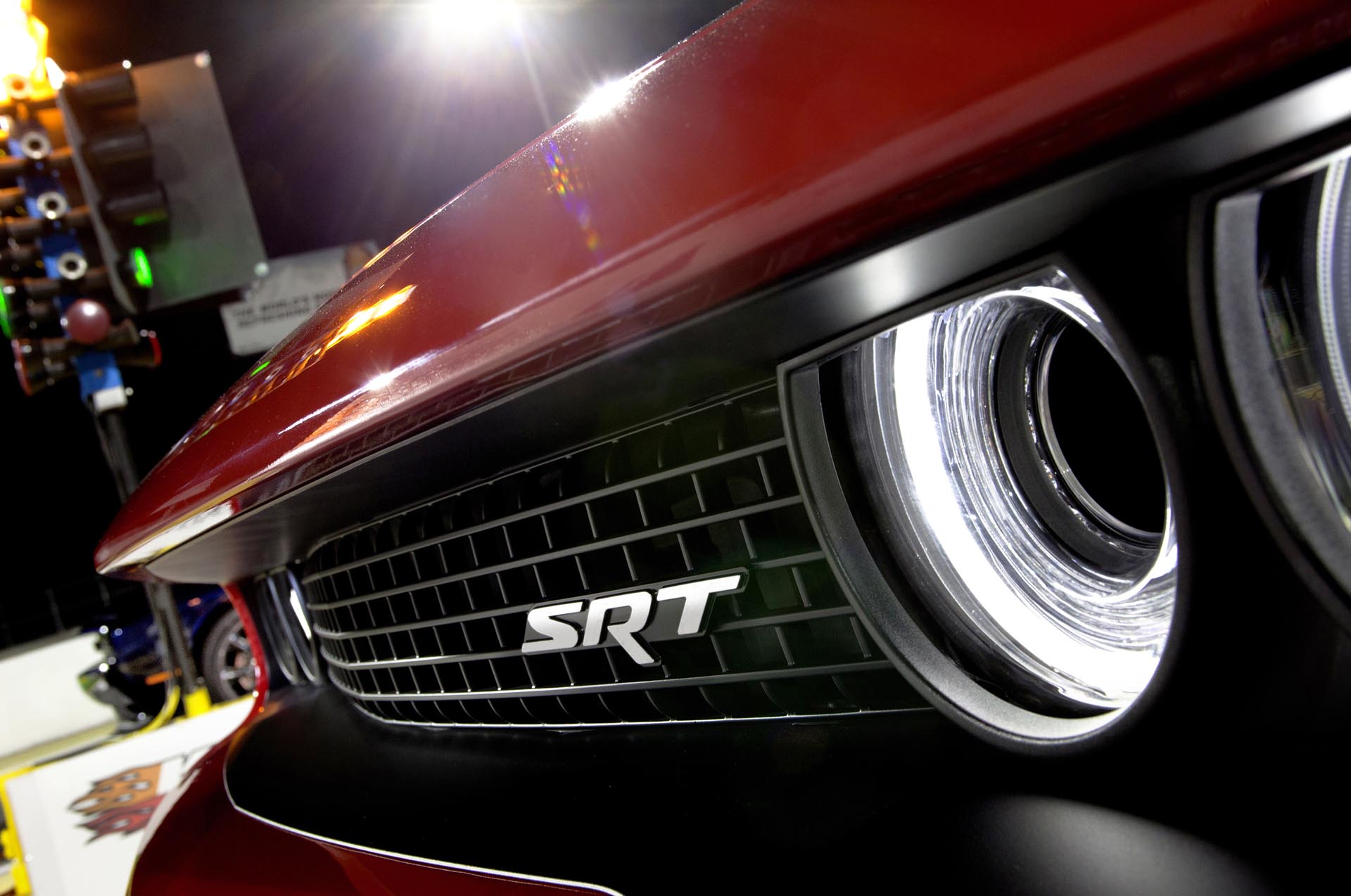 Look closely at the front of a Challenger Hellcat. One of the four ‘light’ cutouts looks like a regular light, but it’s actually an air inlet. Here’s a bit of clever design and innovation used to solve an aerodynamic problem.

Mark Trostle lays it out. “The Air Catcher headlamp on the Dodge Challenger Hellcat is an item that many people may not be aware of. Engineers were looking for a way to get more air into the airbox of the supercharged 707-hp engine, so the design team suggested having an opening in the headlamp area and ramming air though it to the airbox. We tested and refined it with the team in the wind tunnel.  It’s very unique solution that customers of the Hellcat and performance vehicles can appreciate.” 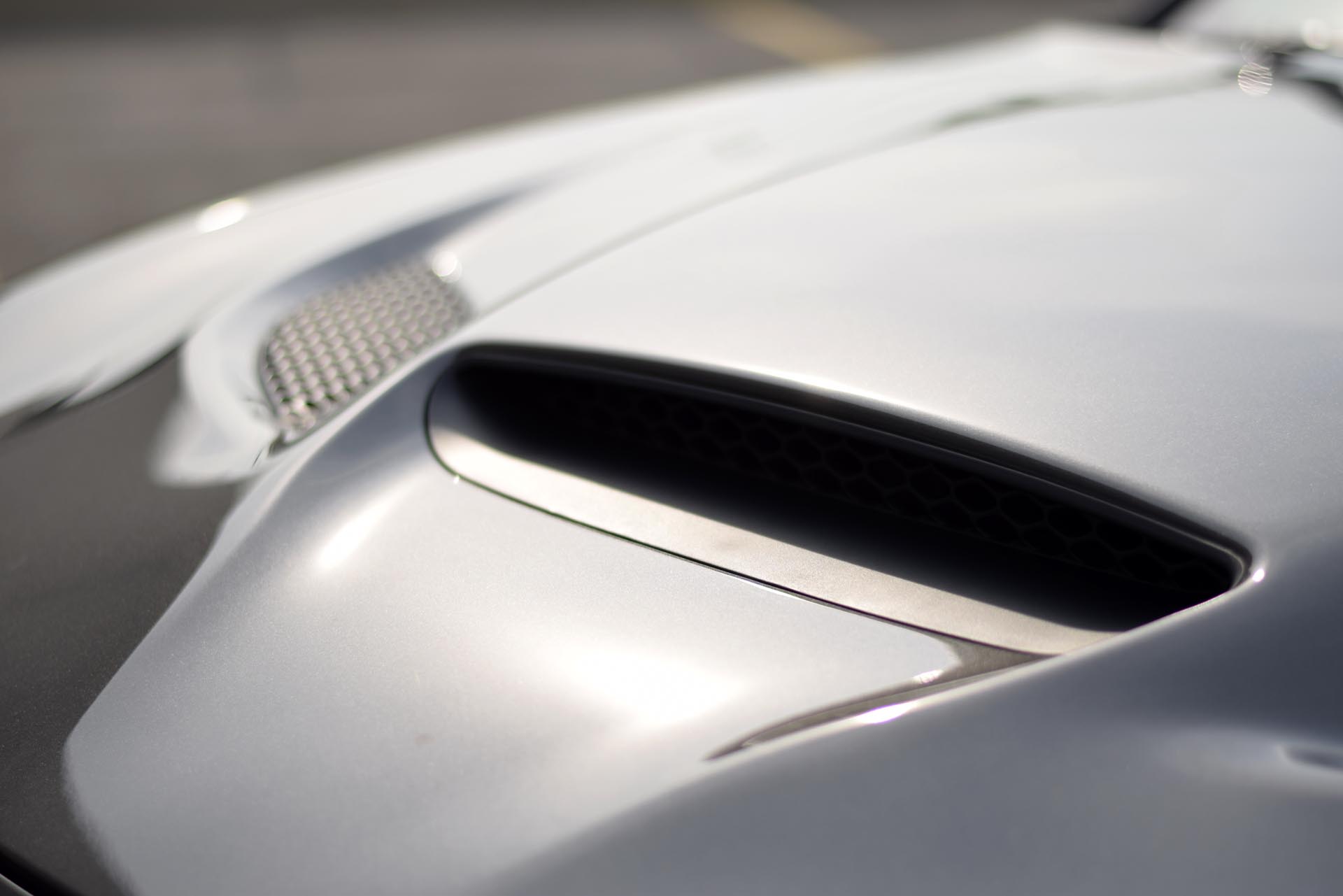 Scoops and ducts come in numerous shapes and sizes and types, including the NACA duct, which allows air to be directed towards a component beneath the vehicle’s skin with minimal reduction to air velocity. That’s thanks to the nearly flush design of the scoop and careful inlet geometry, which only allows fast-moving air, near the surface of the car’s skin, to enter.

Here’s a fun fact: the flush-mounted NACA-style duct favored by many SRT models is ideal for a variety of reasons, including the maintenance of air velocity through the duct, and minimal negative effects on overall aerodynamics. Hood scoops that protrude high up from the hood, as seen on some vehicles, are typically used as a decoration and can limit or even interfere with aerodynamic performance. 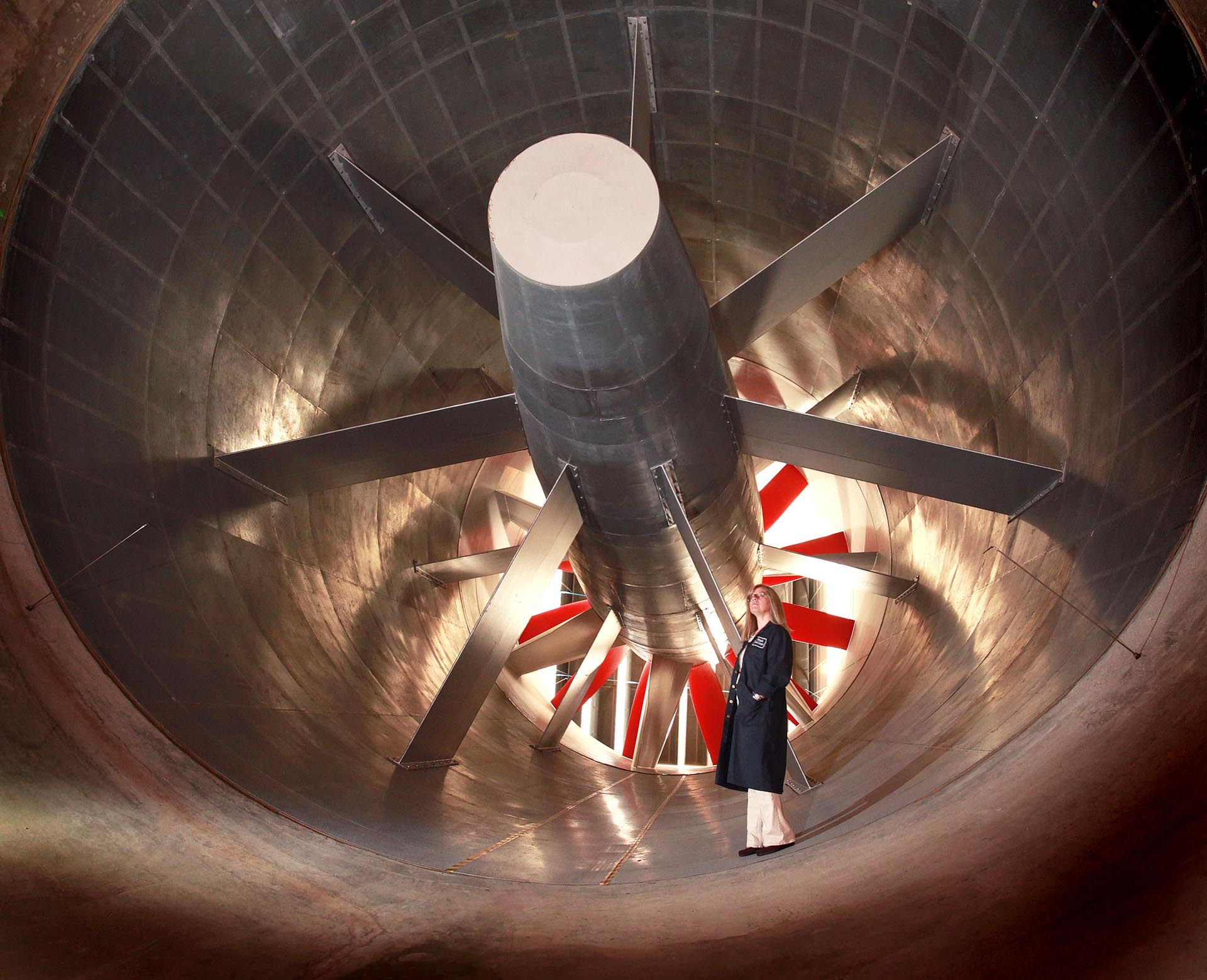 Largely, the top speed of all cars is dictated by that car’s aerodynamics. Though some automakers electronically limit the vehicle’s top speed to a factory-set limit, this approach isn’t part of the SRT ideology. The only thing limiting the top speed of an SRT model, therefore, is its aerodynamic performance.

“This drives both engineering and design team to think differently, than say, the team that is designing a different car in the FCA lineup,” England explains. “The higher top speeds mean our team have to be mindful of drag, but additionally, aero balance is very important to make the vehicle stable and comfortable to drive at high rates of speed.” 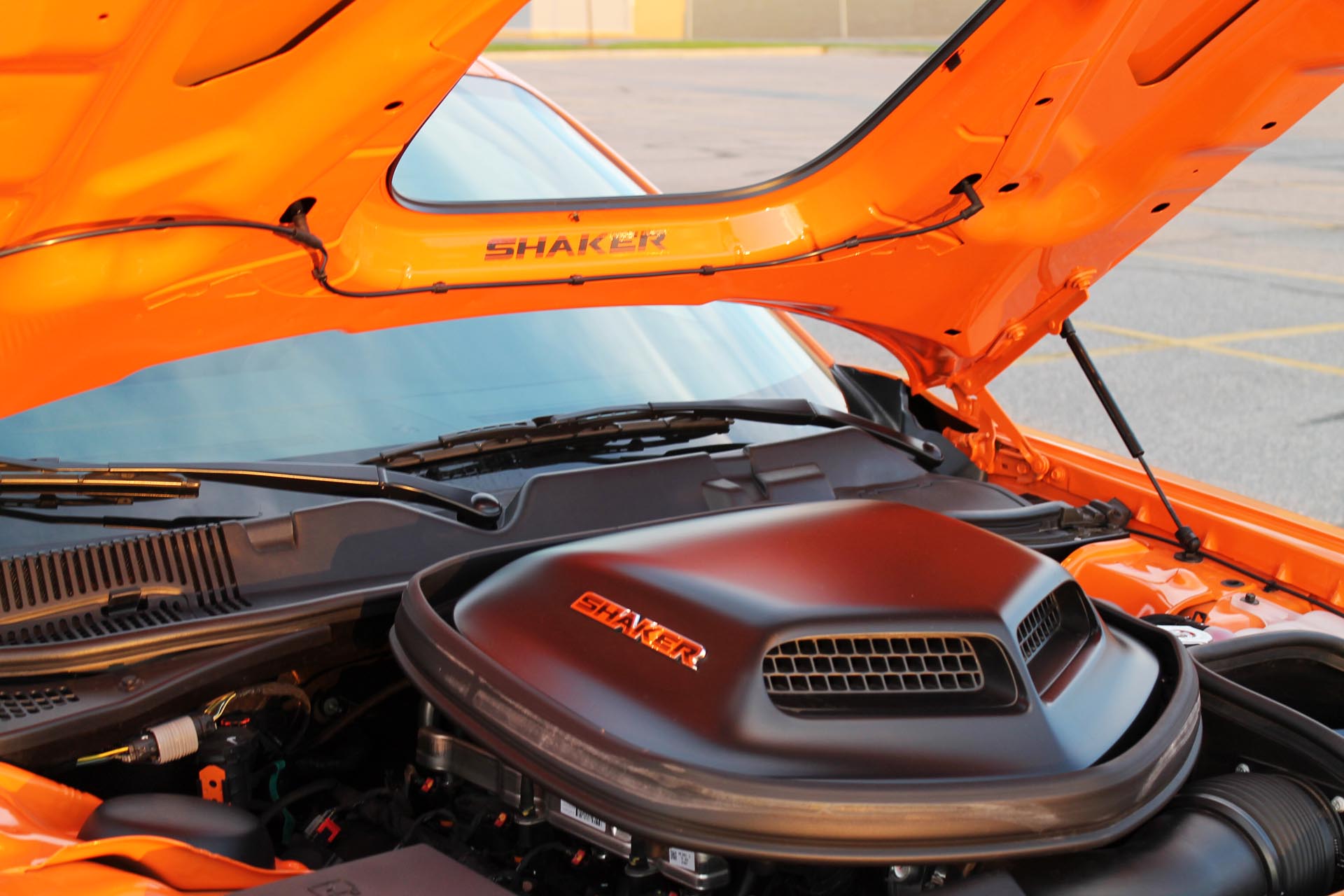 Sometimes, aerodynamics can be used as a bit of a novelty, or a throwback to some old-school go-fast goodness. Case in point? The Challenger’s available Shaker hood. An air intake scoop is bolted to the engine, and protrudes through an opening in the hood. The Shaker name references the visible movement of the scoop portion, in relation to the fixed hood, as the engine idles and revs.

Effectively, the Shaker hood moves the air inlet on select Challenger models from under the hood to outside—so a constant stream of fresh air is captured by the scoop, routed to the airbox, and sucked into the engine. It’s functional, as feeding an engine cool air can boost performance. Plus, it looks just plain awesome.