Fits like a glove. A gorgeous, Italian leather glove.
Advertisement

Fits like a glove. A gorgeous, Italian leather glove.

The road rushes underneath my outstretched knee. Wrist cocked, head low, chest open and eyes up; I’m grinning underneath my helmet as I wind on throttle and push the bike away from me, standing it upright in readiness for the coming onslaught of acceleration.

I brake. Quickly, urgently, excessively. The back end is light and chirping but I wipe off speed in an instant. Just in time. But only just in time… to see my reflection.

Some motorcycles are designed upright. The sketch artist begins at the ground, teasing out the details with the bike in his mind either standing static and upright in a studio, or being ridden down a highway. The controls are all balanced up to suit the rider in this position, bars higher up, feet straight down. Even most sport bikes make a compromise in this direction to accommodate the position we’ll spend most of our time in. 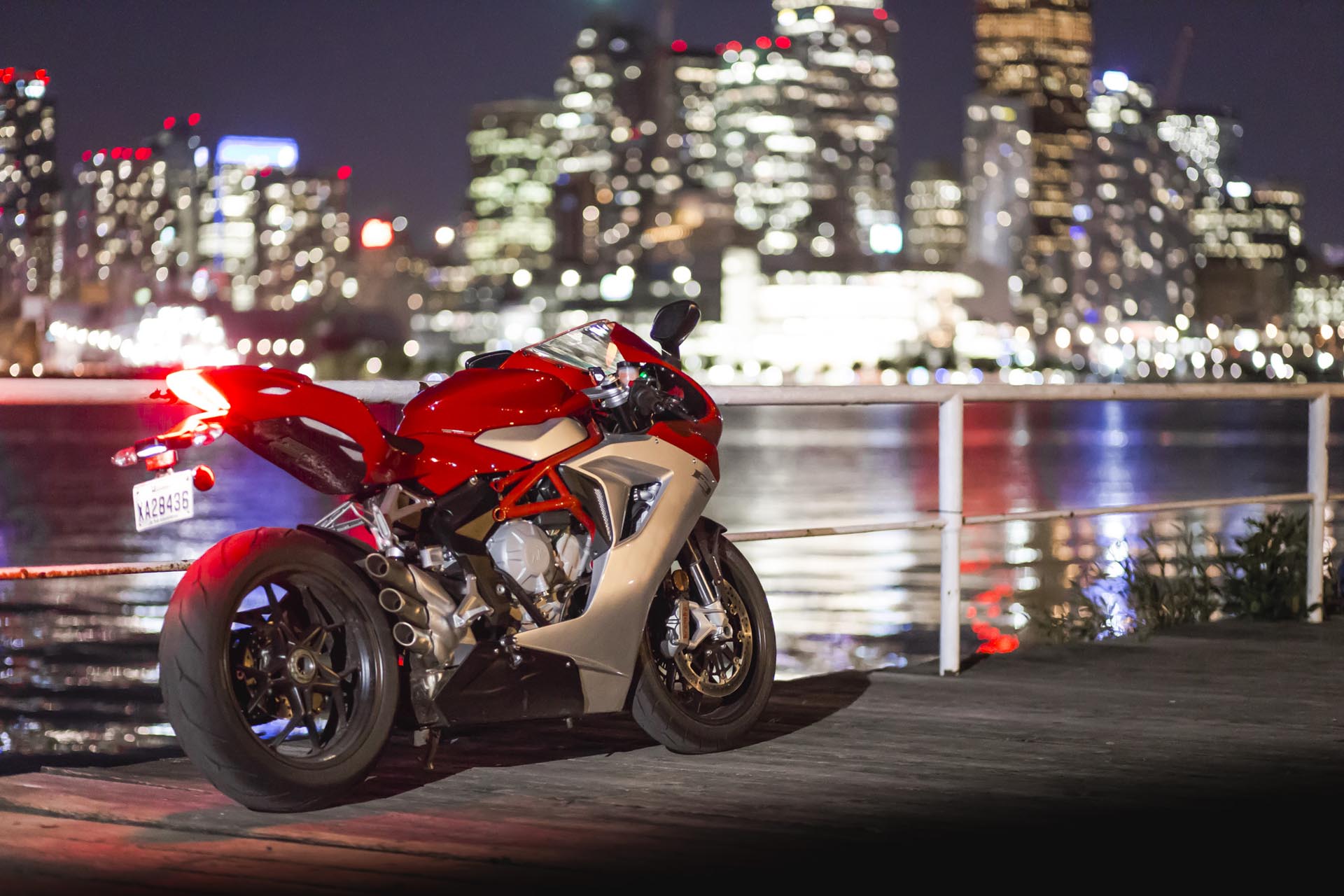 The MV Agusta F3 800 was not designed this way. From the first sketch to the first time they mapped out the riding position in CAD the MV Agusta was designed as if it would spend its entire life cranked over in a corner. And that is a beautiful thing.

The F3 800 doesn’t quite feel right when you first hop on it, the bars are too low, the seat too high, the tank too encroaching, the pegs too far back. Midway through the first corner, however, you’ll be in ergonomic heaven. The more bank angle you wind on, the better the bars fall to hand. That enormous airbox cover and fuel tank has deep overhangs that take hold of your outside thigh and lock it in place, making it easier for you to hang as far off the side of the bike as you dare. The pegs offer up more ground clearance than you know what do with and give you a stable platform for steering with your feet.

Midway through a corner, any corner, the MV Agusta F3 800 feels like home.

MV Agusta is the Ferrari of the bike world. Like Ducati, MV Agusta is fiercely Italian, sport focused and an object of pure lust. But Ducati, with its VAG ownership, is more a Lamborghini. The MV has a more specialized fan base and it’s one that runs deep with evangelical passion. MV Agusta fans are devotees and I was reminded of that when I pulled up at a Toronto bike social. Questions flooded in, and this bike drew as many eyes as any other there. This one isn’t the big-daddy MV, the F4 1000, but rather its younger brother, the F3 800. Later, an older F4 1000 and a Brutale showed up, as well as a Dragster 800 RR.

The quartet stood out from the crowd – evoking the sort of longing that makes people’s eyes glaze over and faces flush red. When it comes to natural beauty, MV Agusta is unparalleled. The trio of exhaust tips alone, perhaps with a hint of single-sided swing arm and exposed rear wheel, makes the sort of wallpaper your partner will be jealous of.

With an 800 cc inline triple generating 148 hp and 65 lb-ft of torque in a chassis that weighs 173 kg dry, the F3 800 isn’t a power-to-weight ratio champion, but it still scampers off the line in eye-melting time. Other bikes might produce bigger numbers on paper – but you won’t care.

And while the 18,000 rpm redline indicated on the dash is a bit of a furfie, peak power is at a still-stratospheric 13,000 rpm. The rev limiter kicks in not long after that, sending a dramatic burst of explosion out through the exhaust pipe to reverberate off the buildings and bridge supports.

Even without the histrionics of the hard cut the inline-triple screams in a brutal orchestra whining up towards the upper reaches of the tach.

The result is visceral. You feel it deep in your stomach and also in the angry stares burning holes in your leathers from fellow motorists. It’s intoxicating but also dangerous given license-affecting speeds are available at 13,000 rpm in first gear.

The brake lever is responsive and gives phenomenal feedback, one finger is all that’s needed for most braking zones and the front wheel feels secure even with late trail braking. Getting off the brakes altogether for the transition to throttle barely registers a ripple in the 43-mm Marzocchi front forks. 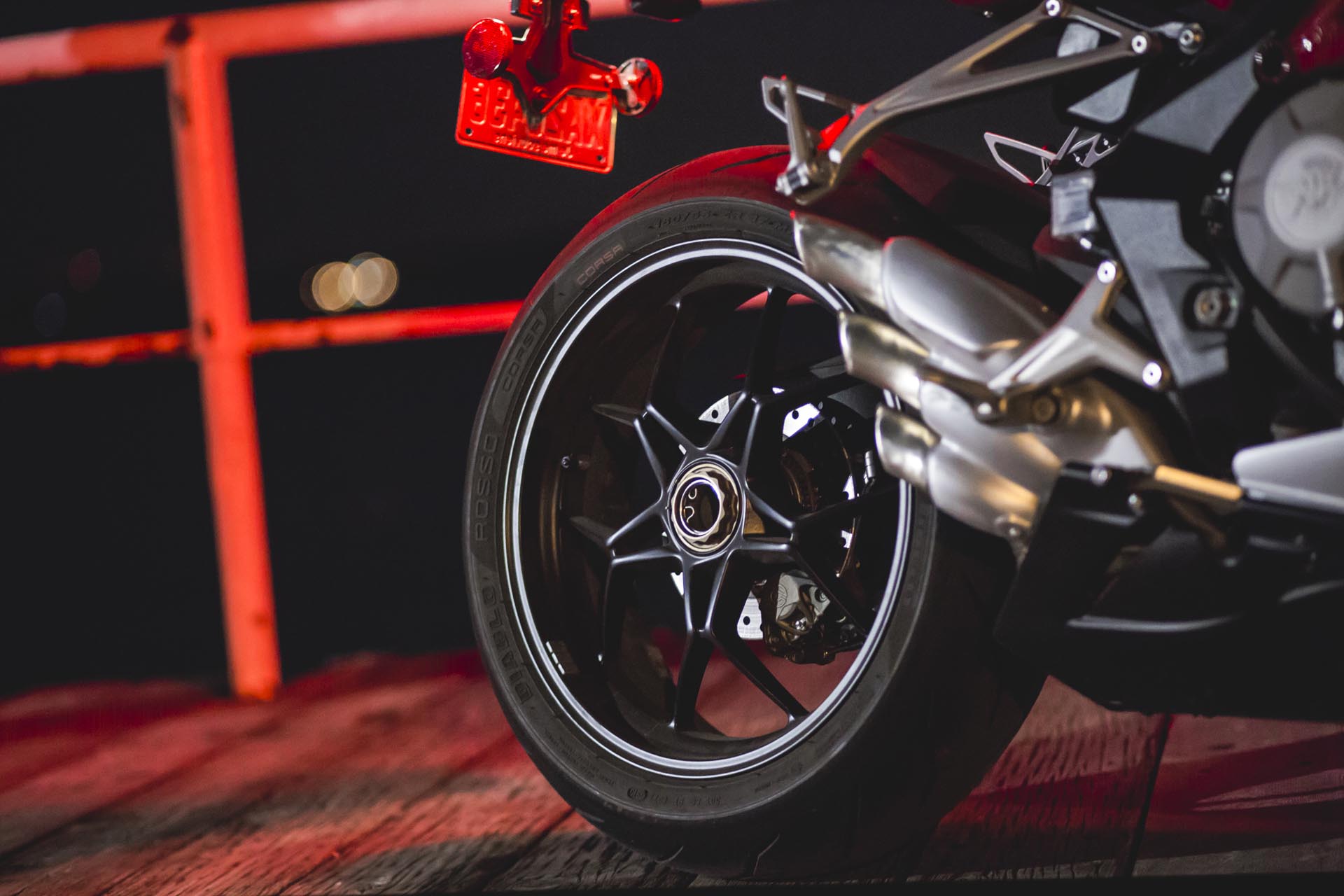 The trellis frame feels light yet substantial, the 800 razor-sharp but not skittish. Perhaps surprisingly, the F3 is a forgiving bike falling naturally into corners and providing surefooted support no matter the surface condition. It at once feels faster than it is and more capable. The sensation that you’re going faster than you expected to and yet can go far faster if you want to crash together in your brain. It’s intoxicating. Meanwhile, the 120/70-ZR17 front and 180/55-ZR17 rear Pirelli Diablo Rosso Corsas scoff at your attempts to break them loose. There is more grip here than most right-thinking humans can overcome on the street.

A Sachs monoshock with 123 mm of travel manages the inconvenience of real roads without giving up mid-corner grip, though gentler souls might find the ride rougher than they like.

Helping keep the most ham-fisted of us in line is a nine-stage ABS and eight-stage traction control system along with a set of quick-select engine maps. I found setting two on the ABS and setting one on the traction control menus the most natural feeling. Switching them is courtesy of a confusing button set on the left grip, which requires some effort and attention to master. Best advice is to set-and-forget the settings before you ride as doing it on the fly is apparently impossible – not to mention ill-advised. Eyes up, always.

At $18,925 the MV Agusta is in the upper echelons of motorcycle pricing - even an 899 Panigale is a full $3,000 less - but the attention to detail, intricate design and glove-fit chassis are stunning.

Is it worth it? That depends who’s asking. But let me put it this way: The MV Agusta F3 800 is special in a way that’s not only tangible, it’s spiritual.