Work hard, play hard. For 67 years, the Ford F-Series has been helping Canadians do both. It's been a farmhand, a roughneck, a cowboy, a miner. It's pulled everything from ski-boats to snowmobiles, driven up the sides of mountains, and brought a new playhouse home for the kids.

You have to wonder if the old-timers who drove the first Fords can even recognize the modern F-150 as a descendant of the basic machines that arrived just after World War II. Nowadays, we've got everything from back-up cameras to satellite navigation. They just had doors and a wood-lined bed.

The evolution of the F-series has been going on for more than half a century, leading us up to the present-day machine with its intensive aluminium construction and turbocharged engines. It's come a long way – here's a look back at how the F-Series conquered Canada. 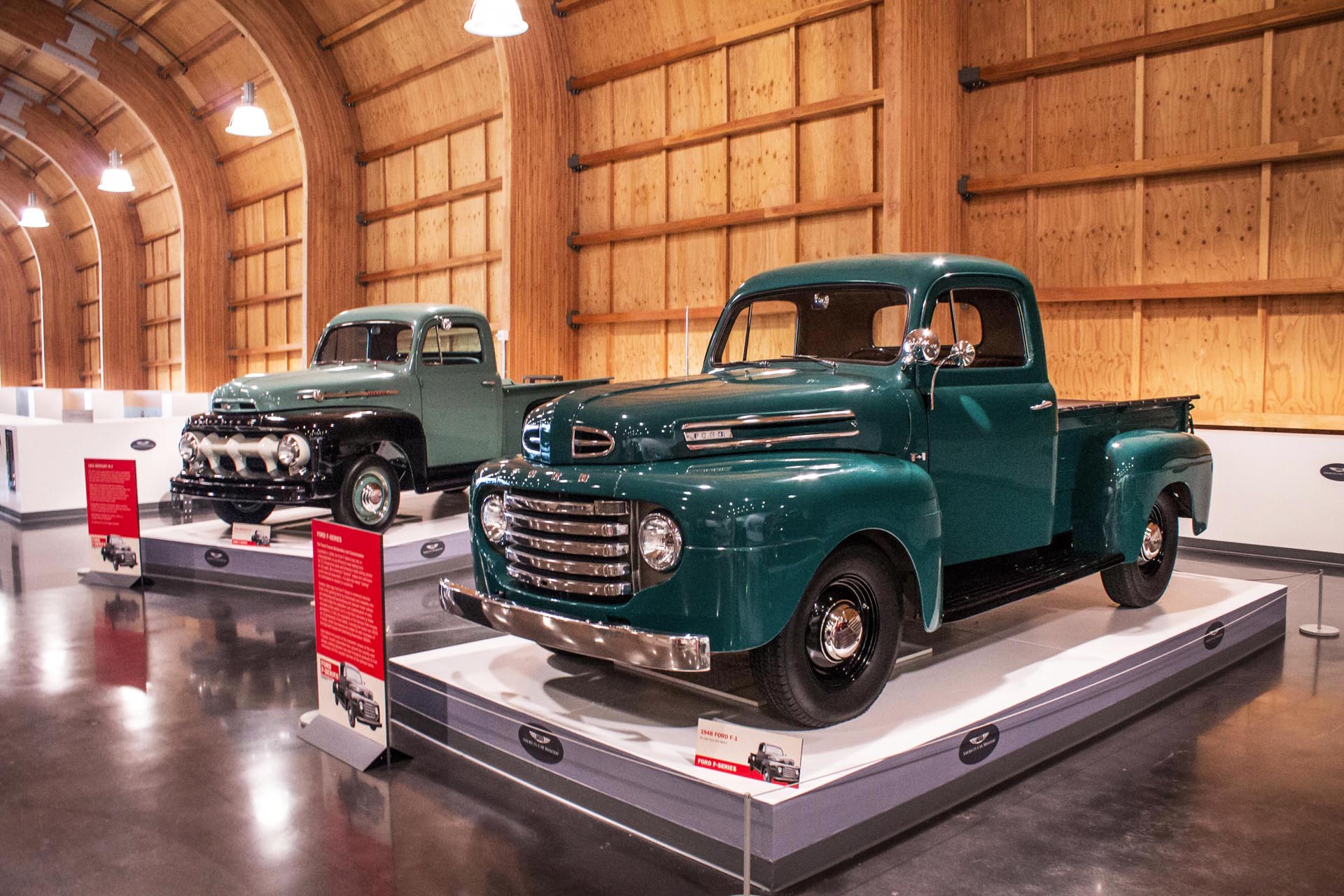 When the first Ford pickups hit the lot, they were simple affairs. Your transmission choices were manual, or manual. There were a range of flathead V8s available, ranging from 95-145 hp. You had seats. And windows. And, um. Paint?

Ford referred to these trucks as “Bonus Built,” hoping to indicate a heavy feature load-out to compete with Chevy. They also planned to avoid using model year designations, so that leftover units would still move off dealer lots without looking stale.

In Canada, we also got a Mercury version of the F-series with the M-series. Basically identical except for badging, the M-series trucks were necessary as some small-towns only had room for either a Ford or Mercury dealer, and in the booming post-war times, everybody needed trucks to sell. 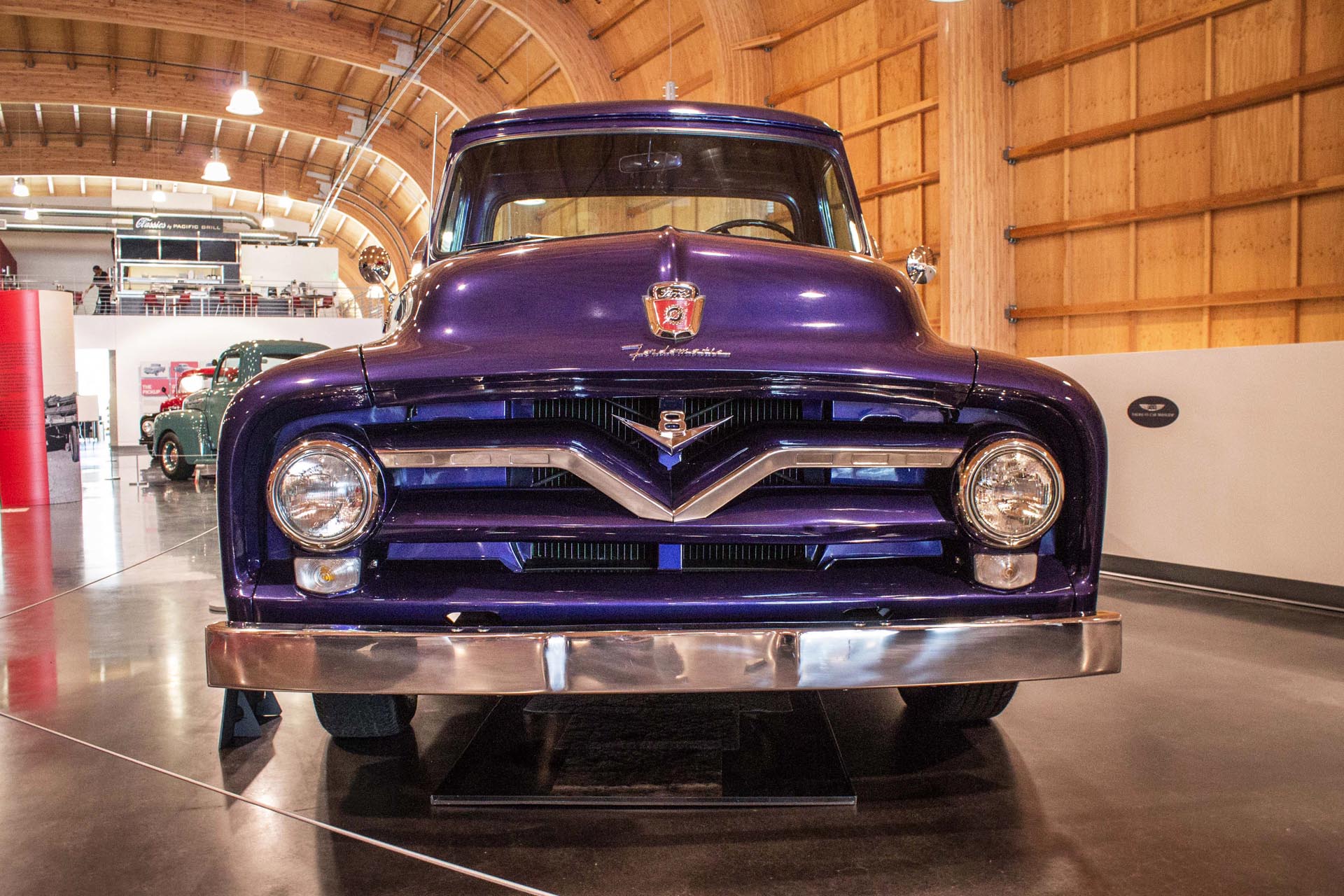 The next-generation Fords were both more aerodynamic in appearance, and came with more modern amenities. Why, you could even order a radio for your new truck! And sun visors!

Even more interesting was the introduction of the Ford-o-matic automatic transmission, making the popular pickup truck even easier for everybody to drive. Ford's nomenclature changed to the now-familiar F-100, F-250, F-350 model lineup, and Canadians still got our Mercurys. Funnily enough, Canada would retain the Flathead V8 for a couple years after American Fords all changed to the more modern overhead-valve engines.

If you wanted a 4x4 version of your Ford truck, you'd look for a Marmington-Herrington badge on the side. Subcontracted to produce all-wheel-drive conversions for Fords trucks, the company initially built tanks in WWII and then moved into trolley buses and axle components. 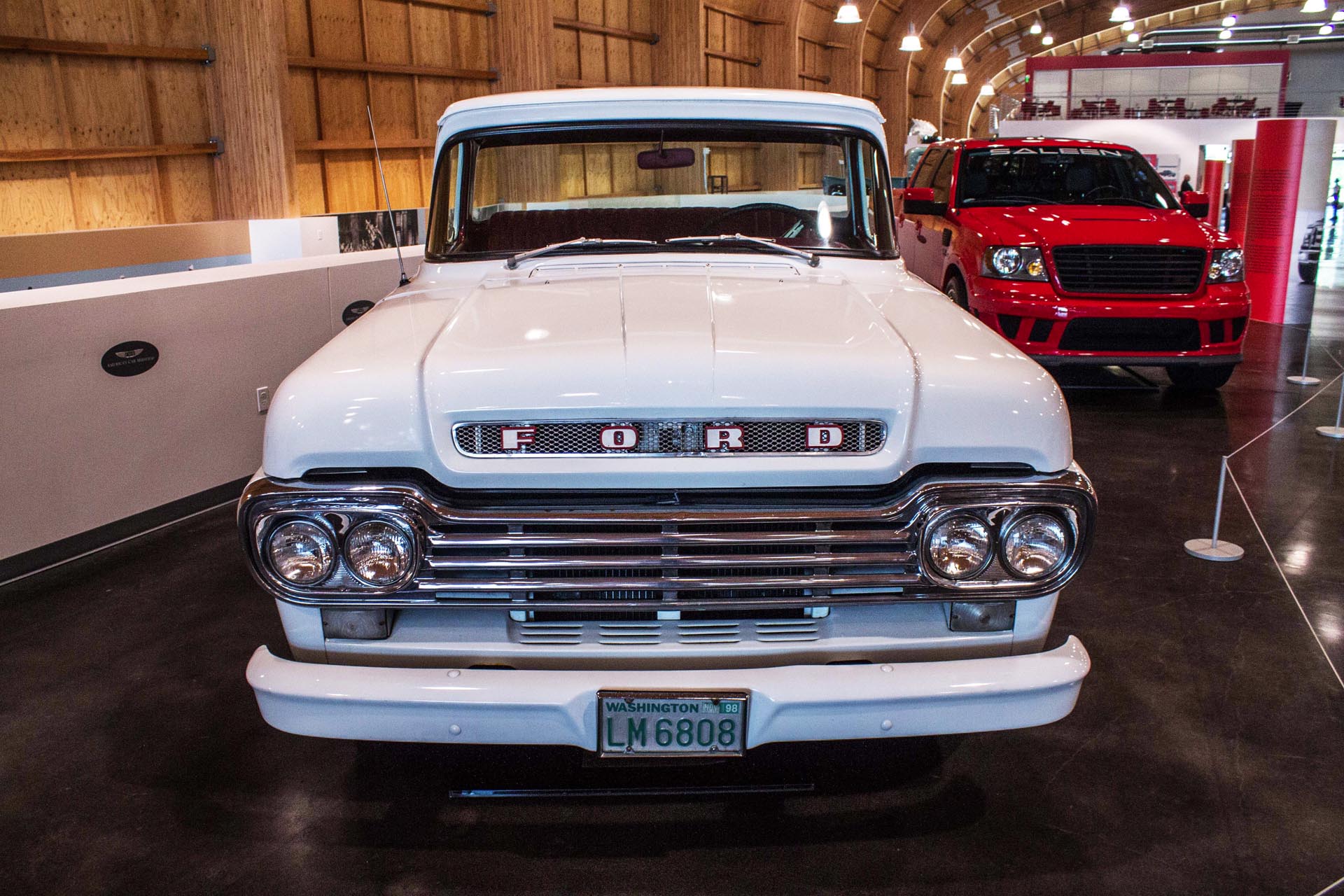 New bed styles and a squarer profile easily marked the third generation of Ford pickup out from its ancestors. You could now get a smooth-sided box, dubbed style-side, as well as the more traditional flare-side working box.

The other big news was the introduction of factory supported four-wheel-drive. Ford was first company to move their 4x4 products fully in-house. In the snowy north, these proved quite popular.

Engines and transmissions remained mostly the same, but production expanded to several locations throughout the states rather than a single factory. Canadians still had the option of picking up a Mercury M100 instead of an F-series. 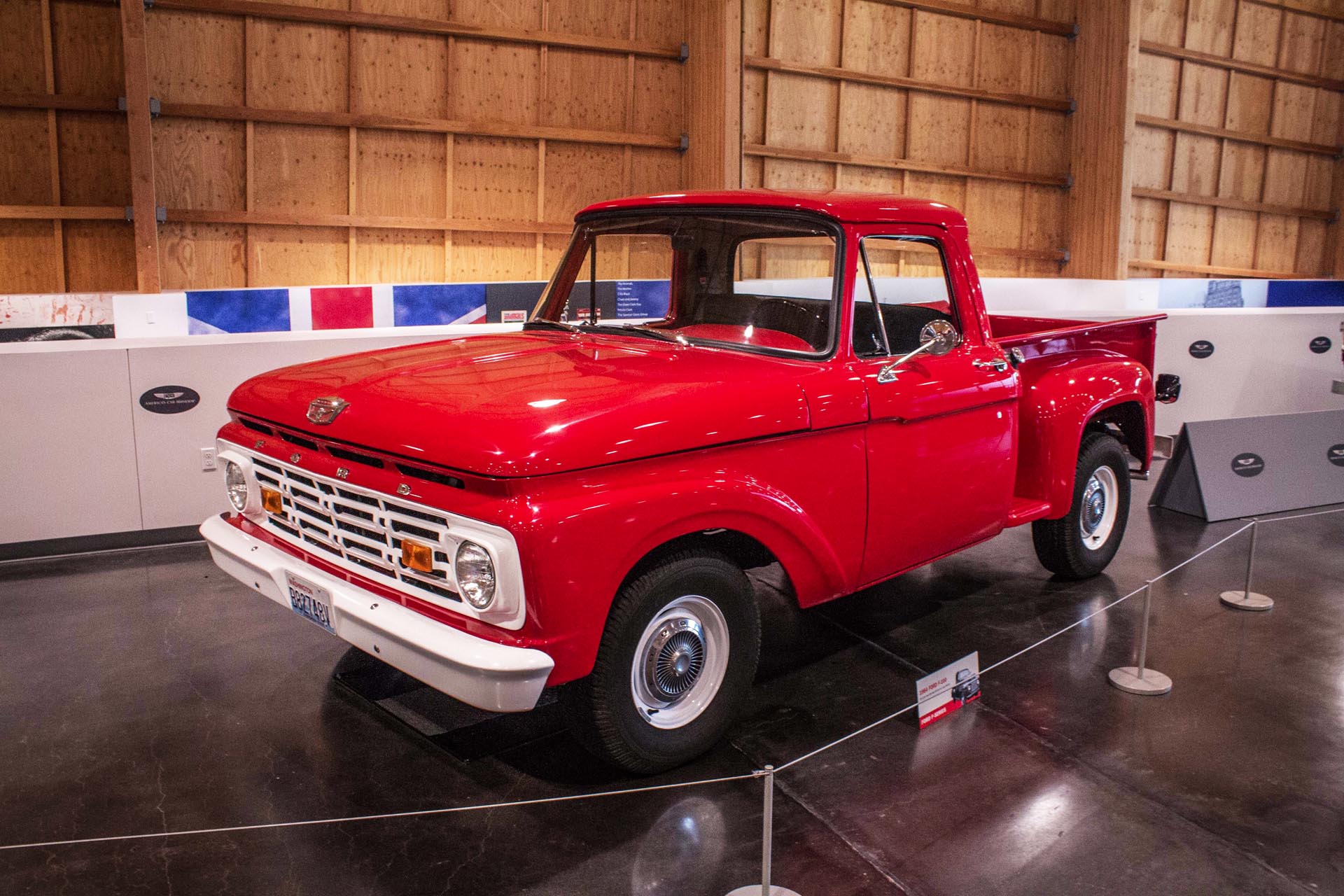 Just as the decade would be a time of social upheaval, the 1960s saw big changes for Ford's pickup. An attempt to move to a unibody cab-and-box setup was rejected by the market, so Ford returned to a traditional layout with a divided box.

They would, however, totally rework the suspension with their twin-I-beam front layout, elements of which can still be found today underpinning the SuperDuty trucks. Power was also way up, thanks to new V8s and a new, thrifty straight-six engine. The former would see power output crest 200 hp for the first time, and the latter would be available in one form or another for the next thirty years of F-series.

1965 also saw the Ranger appearing for the first time. While now we know the model as a smaller offering than the F-series, it was initially a higher trim package for Ford's main line of trucks. The Ranger got a few bits from the Mustang – like bucket seats – and was overall a more stylish proposition. You could see it as a sort of early sport truck. 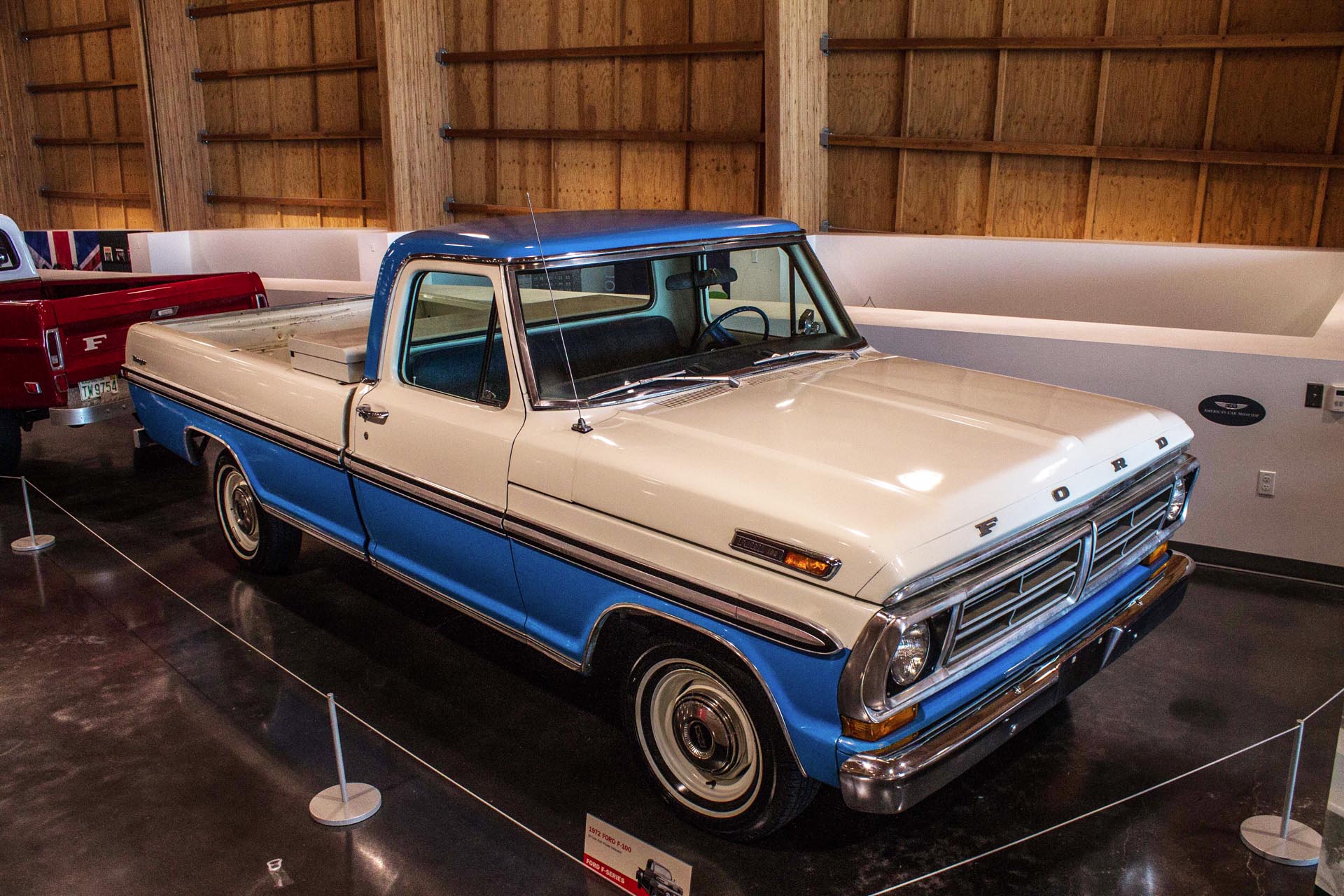 The underpinnings of the fifth generation F-series trucks are largely the same as their predecessors, just widened and lengthened. Under the hood though, you could get some serious firepower: the biggest engine you could now get in your Ford pickup was a massive 6.4L (390ci) V8 cranking out a clearly-underrated 245 hp. You could even get it with a stick.

For Canadians, 1968 was the last year of the Mercury pickup truck. With the passing of the Canada-United-States Automotive Products Agreement, the border became more porous to US imports. From here on out, we'd be driving Fords. 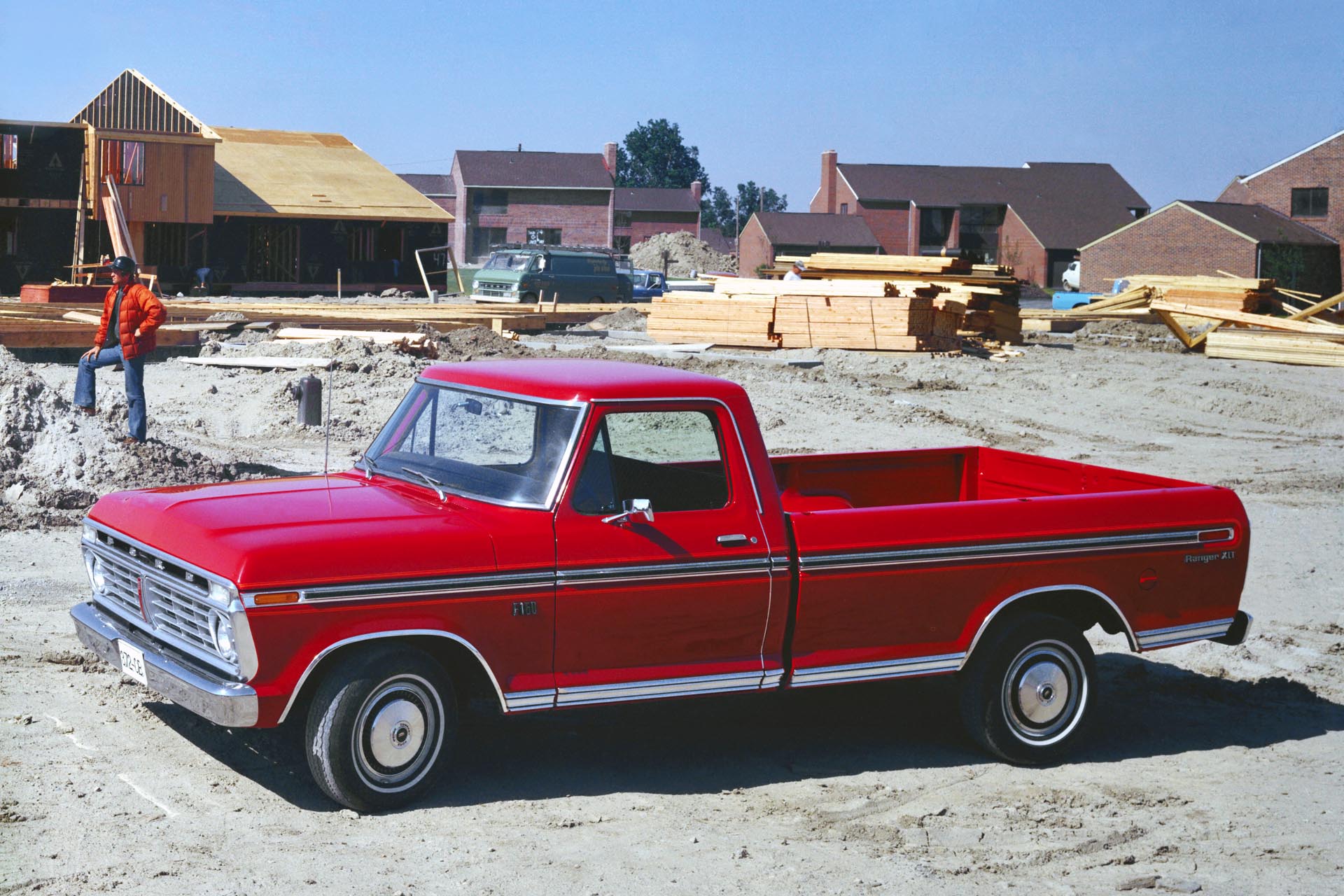 The first of what is now Ford's most recognizable truck nameplate, the F-150 was introduced to sit between the F-100 and F-250 as a way to get around emissions mandates. Known as the heavy half-ton, it could haul over 1,000 kg.

Around this time, Ford started using galvanized steel in construction, particularly in the body panels, which made this generation of trucks highly survivable. They soldiered on through all kinds of rough treatment, and with mechanical similarities to older trucks, were relatively easy to repair and keep on the road.

One year after its introduction, the F-Series finally got its crown as the best-selling truck in North America, a position it continues in to this day. The front fascia would change, becoming squarer and more regular, but it was still a familiar face on our roads and rural highways. 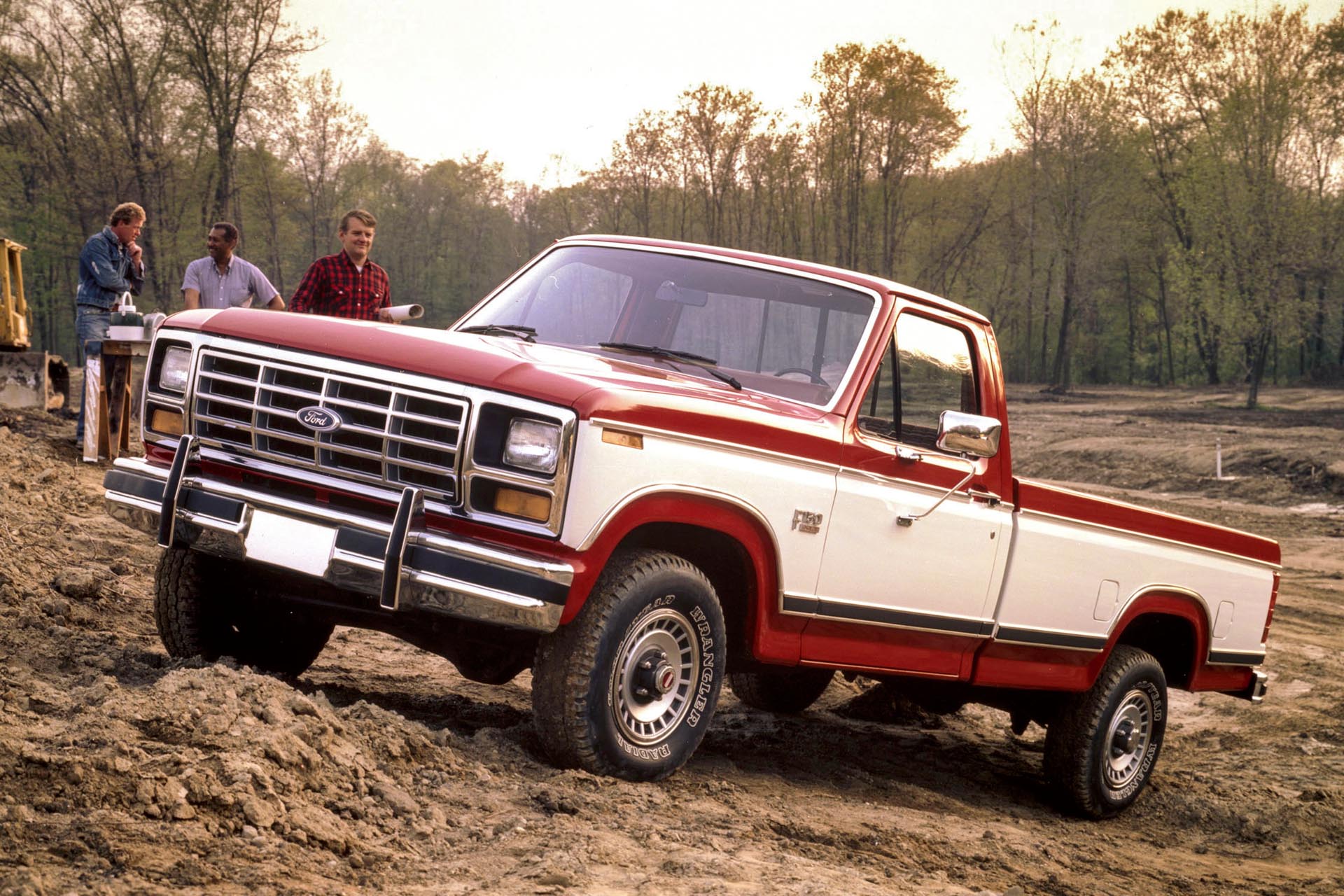 Very early trucks have weaker chassis thanks to an attempt at weight savings (namely, drilling large chunks out of the chassis), but in '82, the F-150 was back to its old tough self. Mid-1980s models are actually becoming collectible, both for age and simplicity.

This year was also the first to feature a Ford blue oval on the grille, something that would be a tradition carrying forward. Also a glimpse into the future was this generation's massive options list, everything from intermittent windshield wipers for the road warrior to an adjustable hand throttle for farm work. 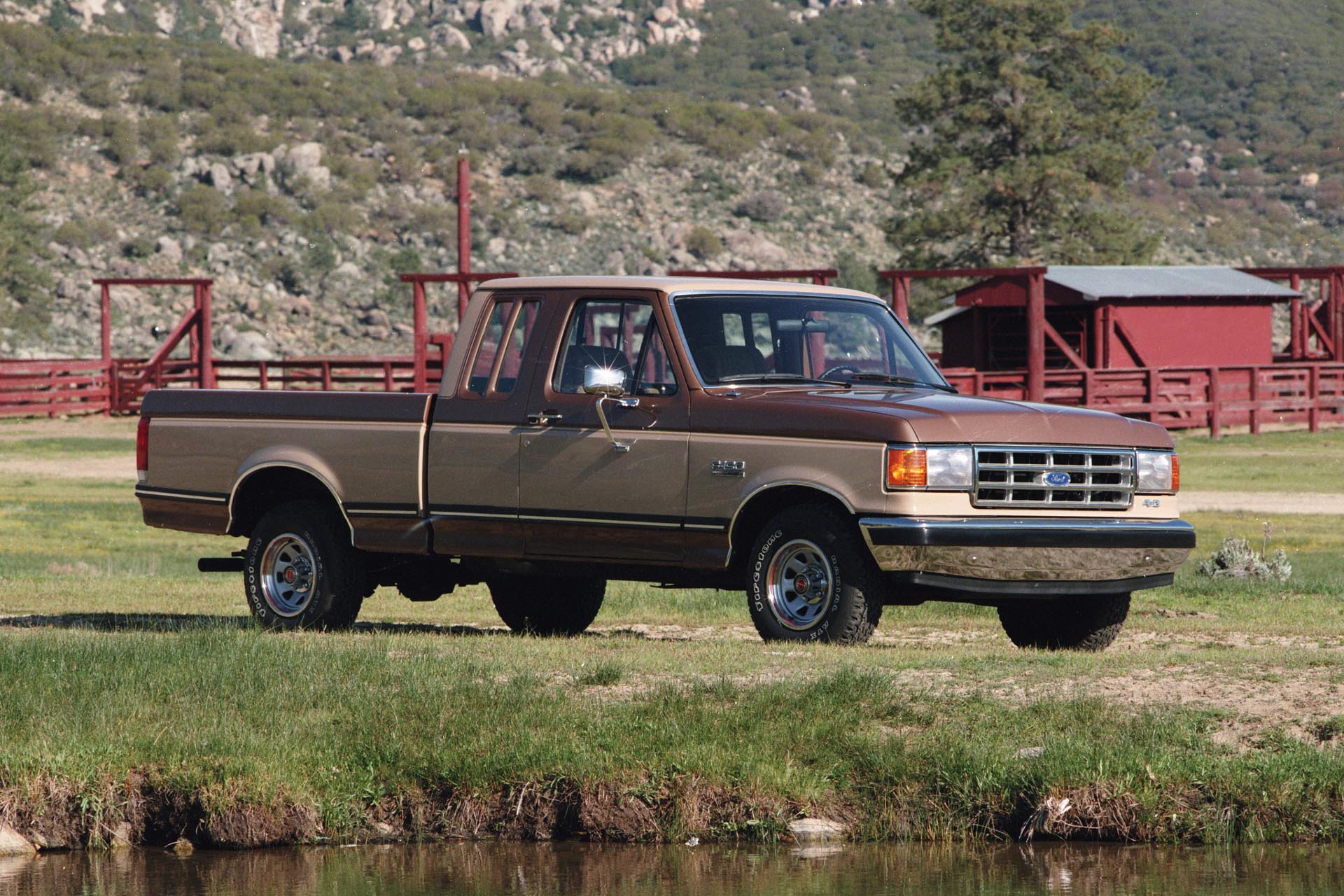 With the introduction of everything from anti-lock brakes to a range-wide adoption of fuel injected engines, the 1988 F-150 was now more efficient and safer than ever. Boxier too, as the flare-side working box was now completely discontinued in favour of the smoothed-out style-side look.

For the bigger F-series, heavy-duty diesel power was growing in displacement and grunt. A 7.3L (444ci) Navistar diesel V8 produced 180 hp and a stout 365 lb-ft of torque.

However, and despite a redesigned interior, the F-series was still on a carryover chassis, and wasn't radically different. It wouldn't be until the next generation that Ford shook things up. 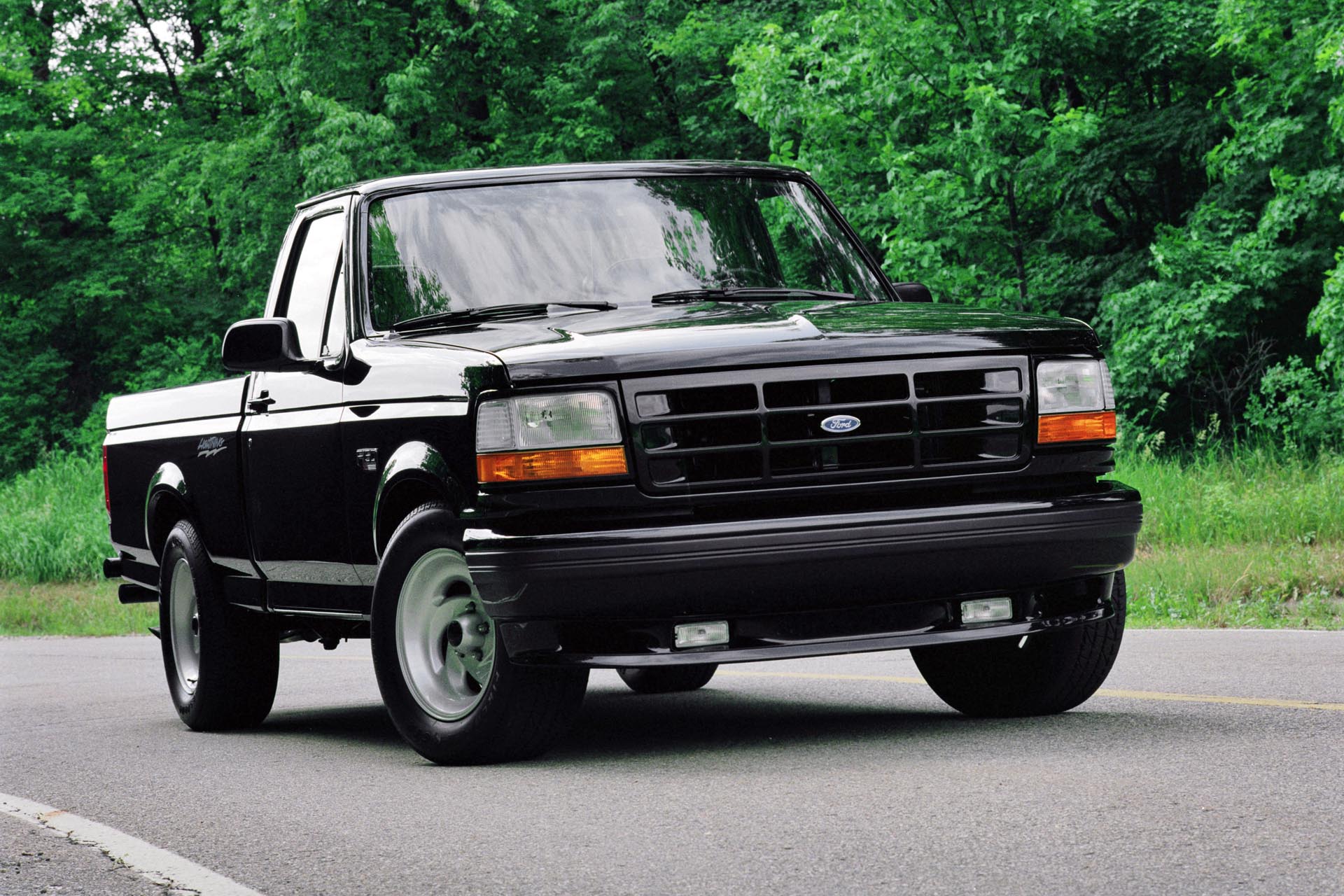 Ford divided off their Superduty trucks from the main line of F-series vehicles, further differentiating them from the F-150. They also applied a few cosmetic changes to their trucks, rounding things off slightly in an effort to improve aerodynamics.

One of the more interesting trucks of the time was the first generation of SVT Lightning. If an F-150 was mostly a work vehicle up to this point, with various trims providing a little more sport flavour, then the Lightning was the idea that a sport truck could contain some real sport.

Along with upgraded brakes and a beefed up suspension, the Lightning benefited from Ford's Special Vehicles Team going through its 5.8L engine and adding high-po Mustang components. The result was 240 hp and 340 lb-ft of torque. This was the truck as a choice based on want, not necessarily on need. 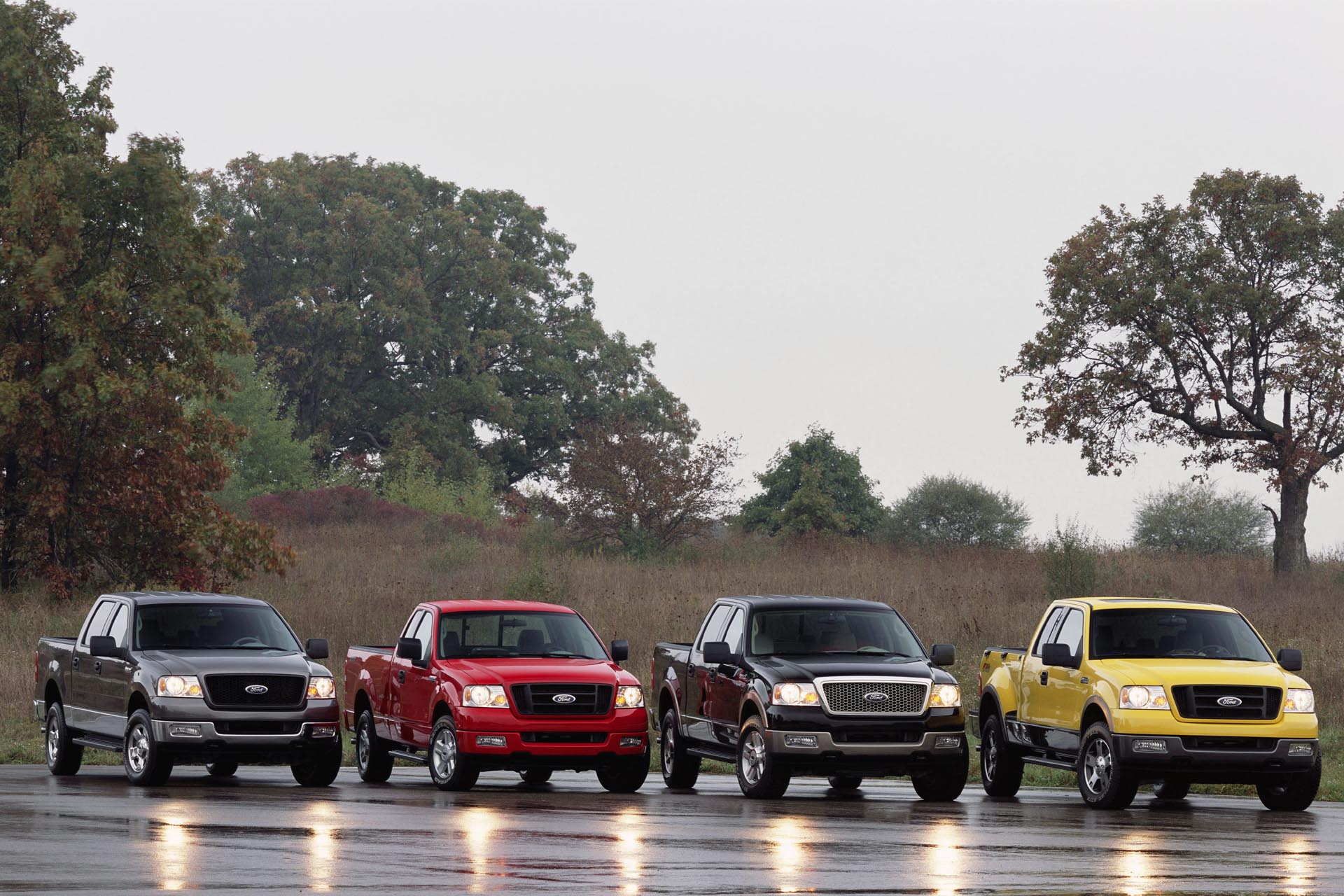 The tenth generation of Ford trucks saw multiple special variants begin to percolate to the surface, everything from the black and chrome Harley-Davidson branded trucks, to the all-the-fixin's King Ranch edition. These late-90s trucks rode on an all-new platform, and the smoothed-out shape was much more like a car than a traditional truck. Ford played it safe in the first model year, still offering the last-gen truck for several months.

However, by the early 2000s, sales had levelled out. There were cheaper sport versions for the youth, the ill-fated Lincoln Blackwood luxury-truck for the rhinestone cowboys, and the FX4 offroad machine. This latter came with some interesting gear for getting off the beaten path: everything from heavy-duty Rancho shocks to skid plating. The Raptor was still some years off, but it wouldn't arrive as a complete surprise. 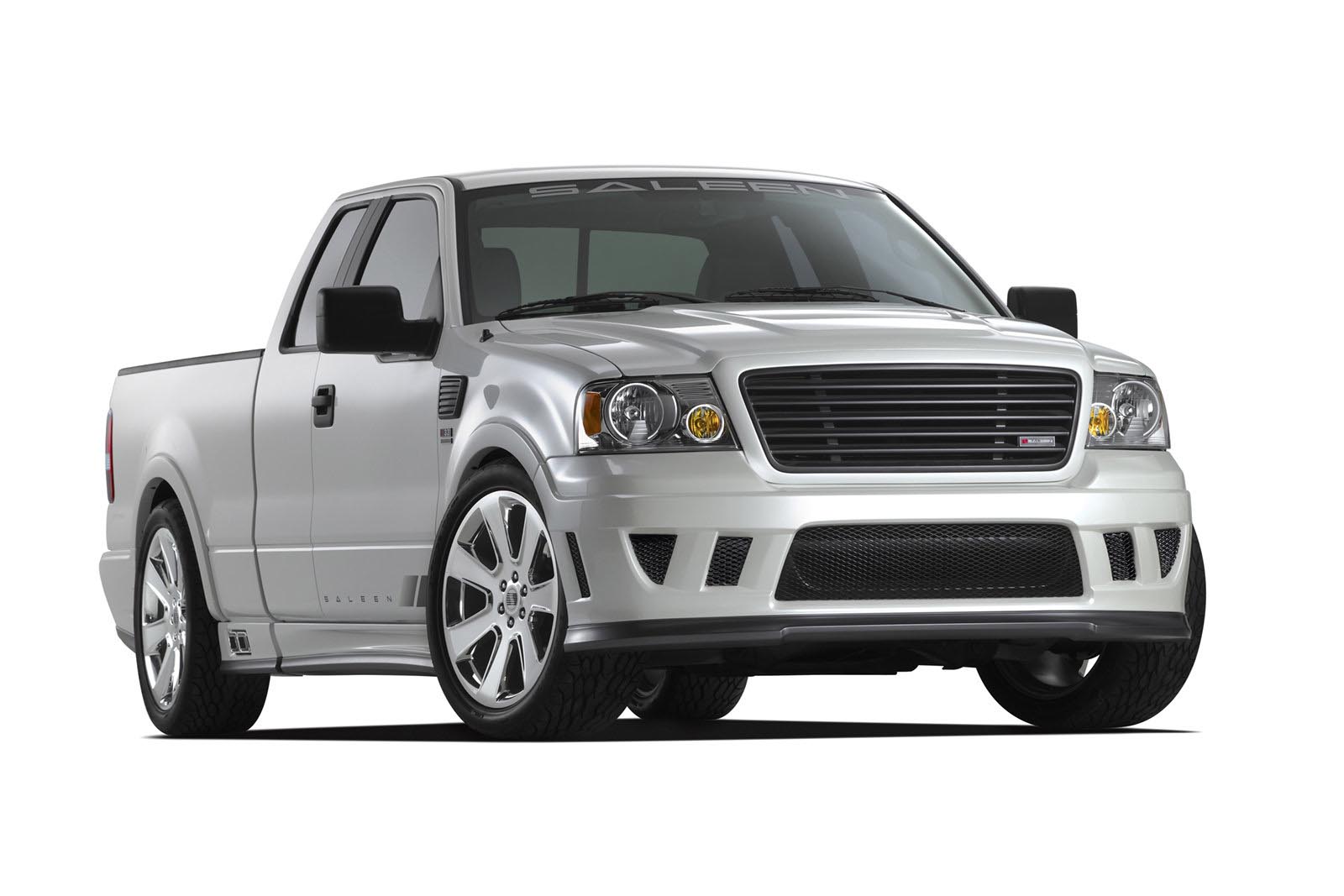 With the popular supercharged Lightning on hiatus, fans of fast Ford pickup trucks had to wait. But not if their pockets were deep enough. In the next generation of F-150s, you could buy a genuine barnstormer of a machine: the 450 hp Saleen S331.

Steve Saleen's speed shop has been making Mustangs go faster for decades, and at the time of the S331 was producing the previous-generation Ford GT under contract. Clearly, they knew what they were doing when it came to making the Blue Oval stampede. The S331 came in one variant – 6'5” box, Supercab two-wheel-drive – and Car & Driver would call it, “A Mustang with a back porch.” 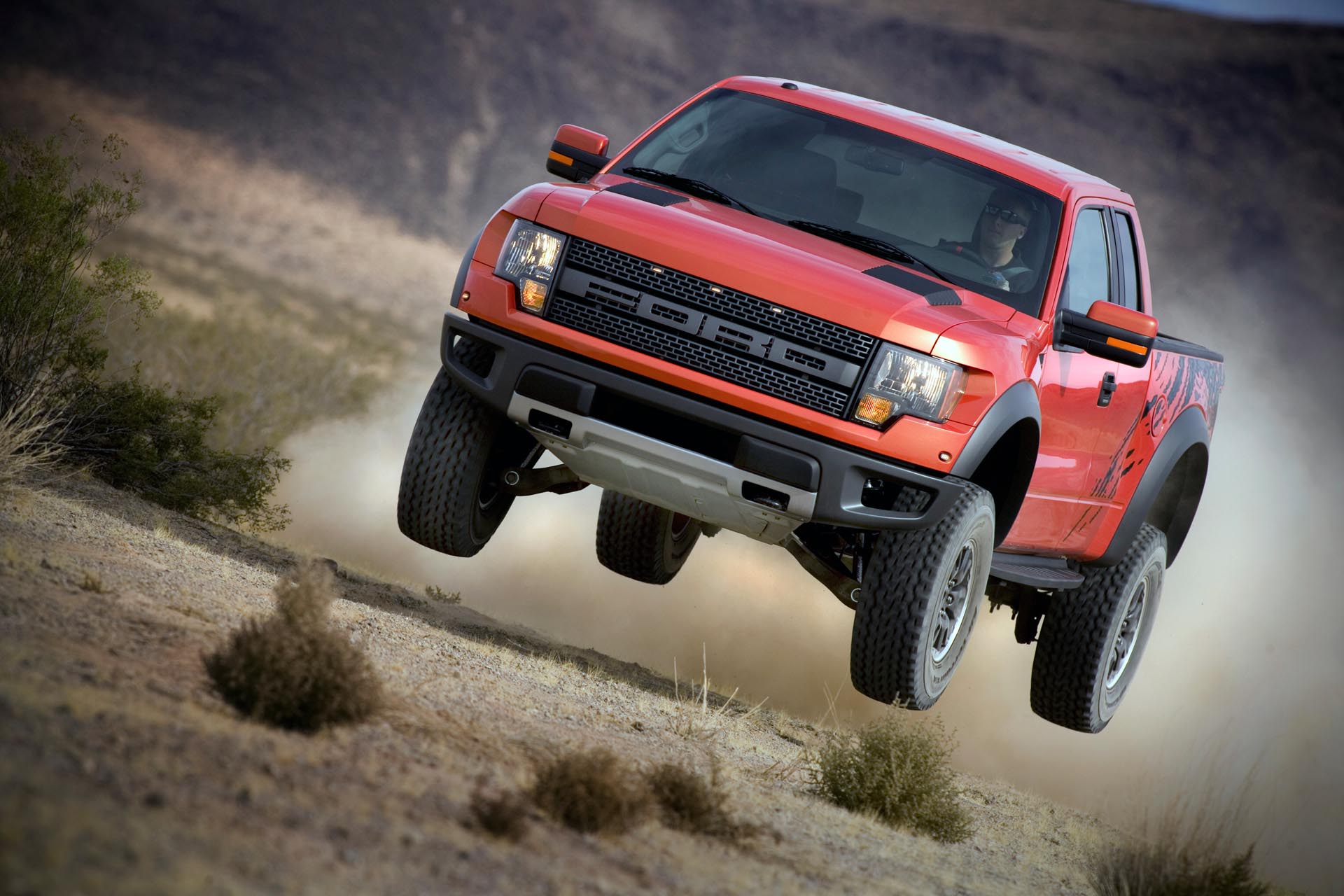 Built for the Baja, but a favourite of the boulevard cruiser, the Raptor is one of the most extreme versions of the F-150 ever produced. The one to get is the larger 6.2L V8 machine, as the fuel economy isn't really any worse than the base model 5.4L V8 – you can just do bigger jumps.

With widened flares and room enough for four friends, the Raptor quickly became the poster truck of the outdoor lifestyle crowd. No, not fly-fishing and hiking – more like motocross and base-jumping. While there were several complaints about bent chassis components when early Raptors were driven off some really big berms, for the most part these trucks can handle anything. They are really quite thirsty, however. 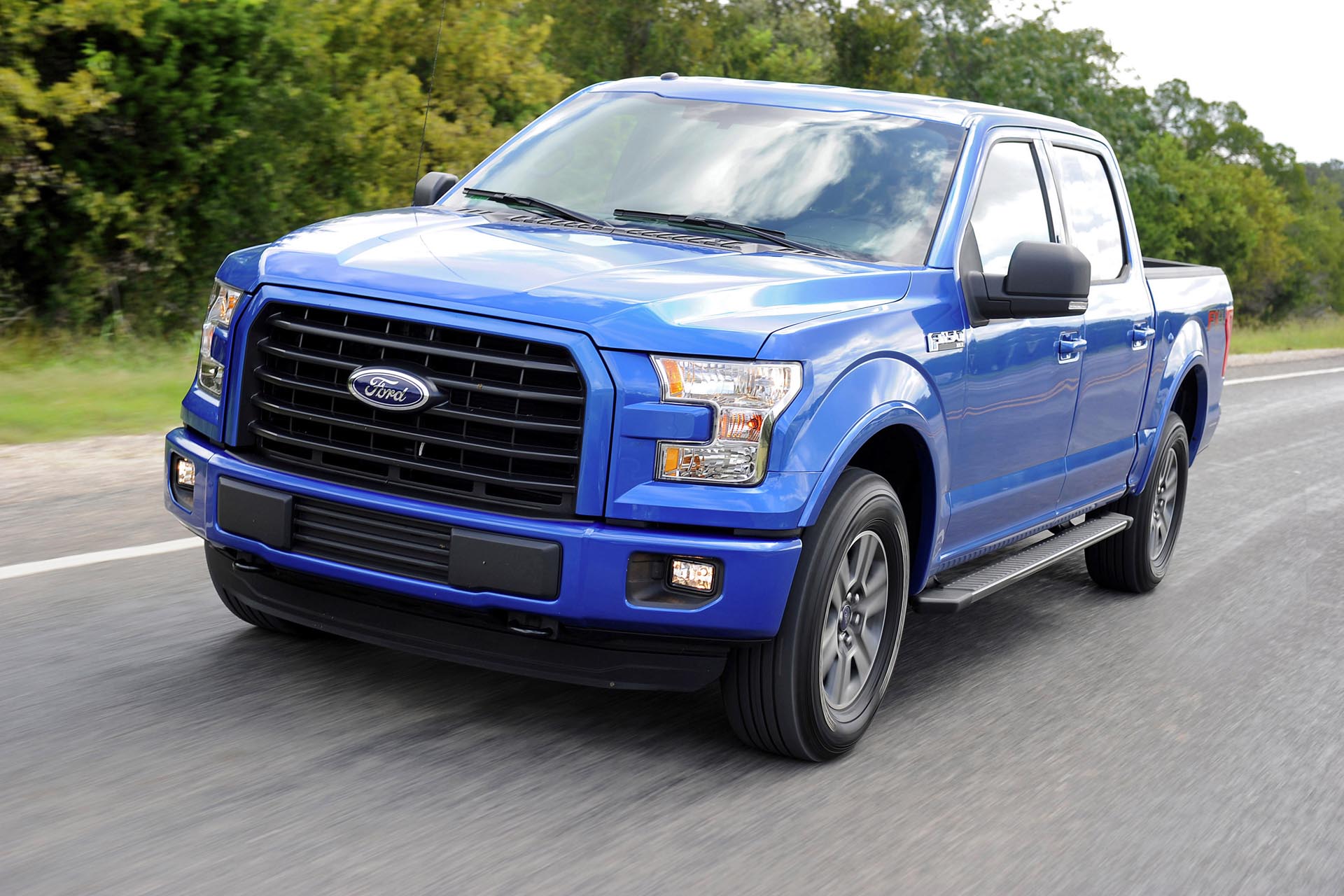 There is, perhaps, no more overused word in the automotive industry than “gamechanger.” However, you certainly have to admit that the weight-savings seen by Ford's switching to aluminium construction for their latest F-150 rewrite the rulebook. Weight is down as much as 300 kg in the largest trucks, contributing to greater towing and load capacity, as well as better fuel economy.

Add in decent cruising fuel economy, and this new F-150 is much more livable as a daily driver than its bare-bones ancestors. With fuel prices remaining relatively low, the F-150 seems to be more popular than ever as a personal use truck, used more for pleasure than hard work.

Whatever way it gets its dings, either in the quarry or just a parking lot, the F-150 remains a favourite of the land. What'll the next-generation hold? Who knows what'll be under the hood, but it'll still carry everything we need in that box out back.