McLaren 650S: In the Footsteps of Giants They grow up fast.
Advertisement

They grow up fast.

It's often been said to me, as a parent, blink and you'll miss stuff. Well get a load of this thing.

Hand made from carbon fibre. A twin-turbo 3.8L V8 that cranks out 650 hp. A seven-speed dual-clutch gearbox that swaps gears in milliseconds. Rear-wheel drive. Convertible. Orange.

Did I say blink and miss? Um, no. The McLaren 650S is, of course, as fast as all get out, but it also draws eyeballs like the best supercars do. Admittedly, some of the attention is of the, “Awesome! Wait, what is that?” variety, as shouted at me by a couple of bros in a battered Jetta, but sometimes there was just incoherent screaming. The guy with the full face tattoo really liked it. I exited stage left.

And then, the first speed trap. “Slow down!” screamed a cop on the side of the road, not-in-any-way-incoherently. I wasn't even speeding. Thanks, orange car. 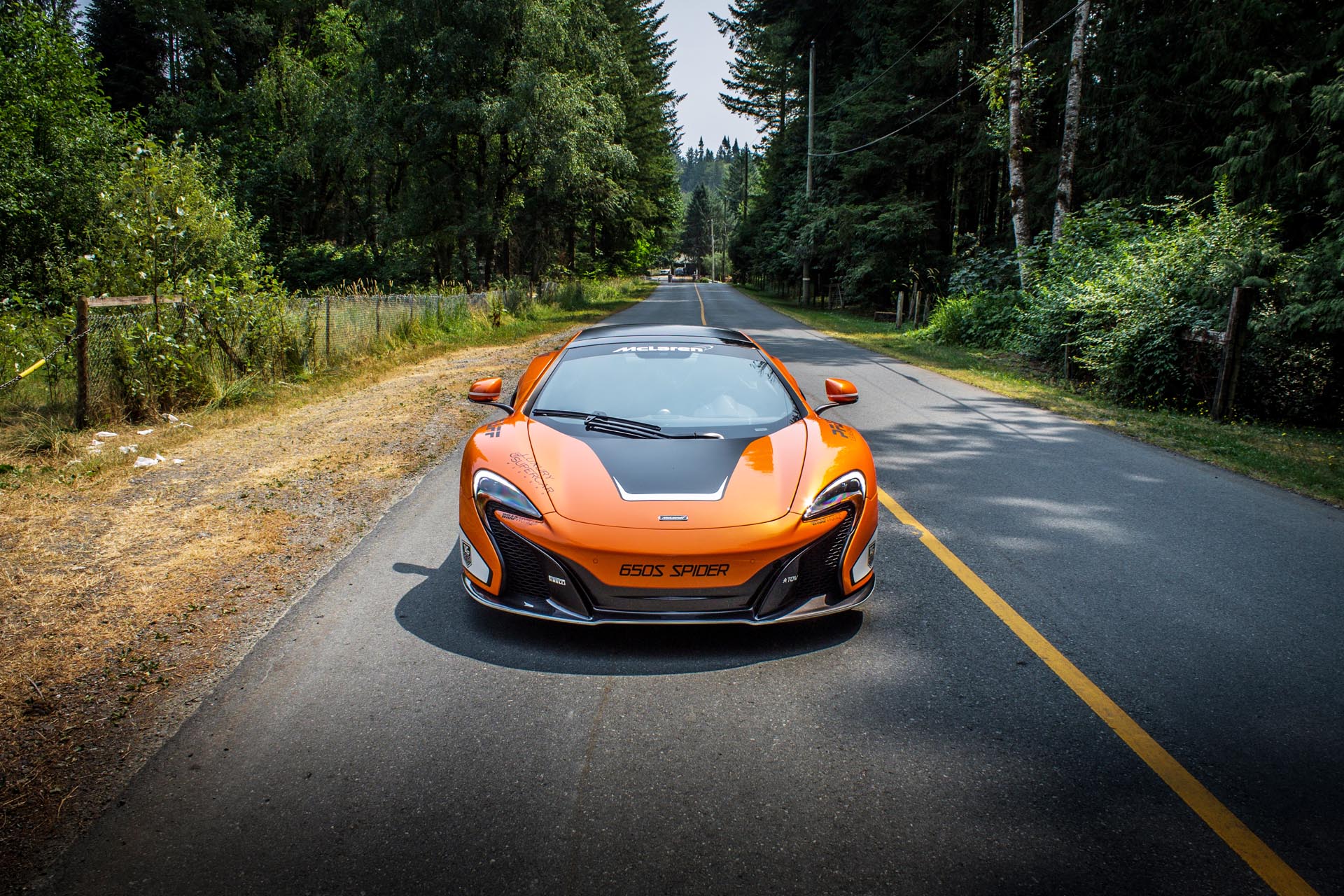 Having picked up this be-decalled example from the dealership downtown, I immediately got out of the city by the most expeditious route possible and found myself hurtling along the Barnet highway towards Coquitlam. The mission was simple: I knew Bruce McLaren himself had raced in Canada in the 1960s. I can't find rock-solid evidence that he drove here, at Westwood, but it's likely as the course was part of the Canadian Sports Car Championship (CASC) circuit he ran in.

Westwood Motorsports Park is long gone, a victim of the developer's bulldozer, but shadows of the track can still be seen. More than a half-century ago, what a sight it would have been. At Mosport McLaren took the win in his Oldsmobile-powered Zerex Special, ahead of such luminaries as Roger Penske and John Morton. Dan Gurney and Jim Clark were both there, though they sat the race out with broken cars.

Coopers and Cobras, Lotuses and Lolas. There was a Ferrari 250GTO and a Ferrari 250TR. A Scarab, a Porsche 904 GT, a Ferrari Dino. It was a golden age of racing. 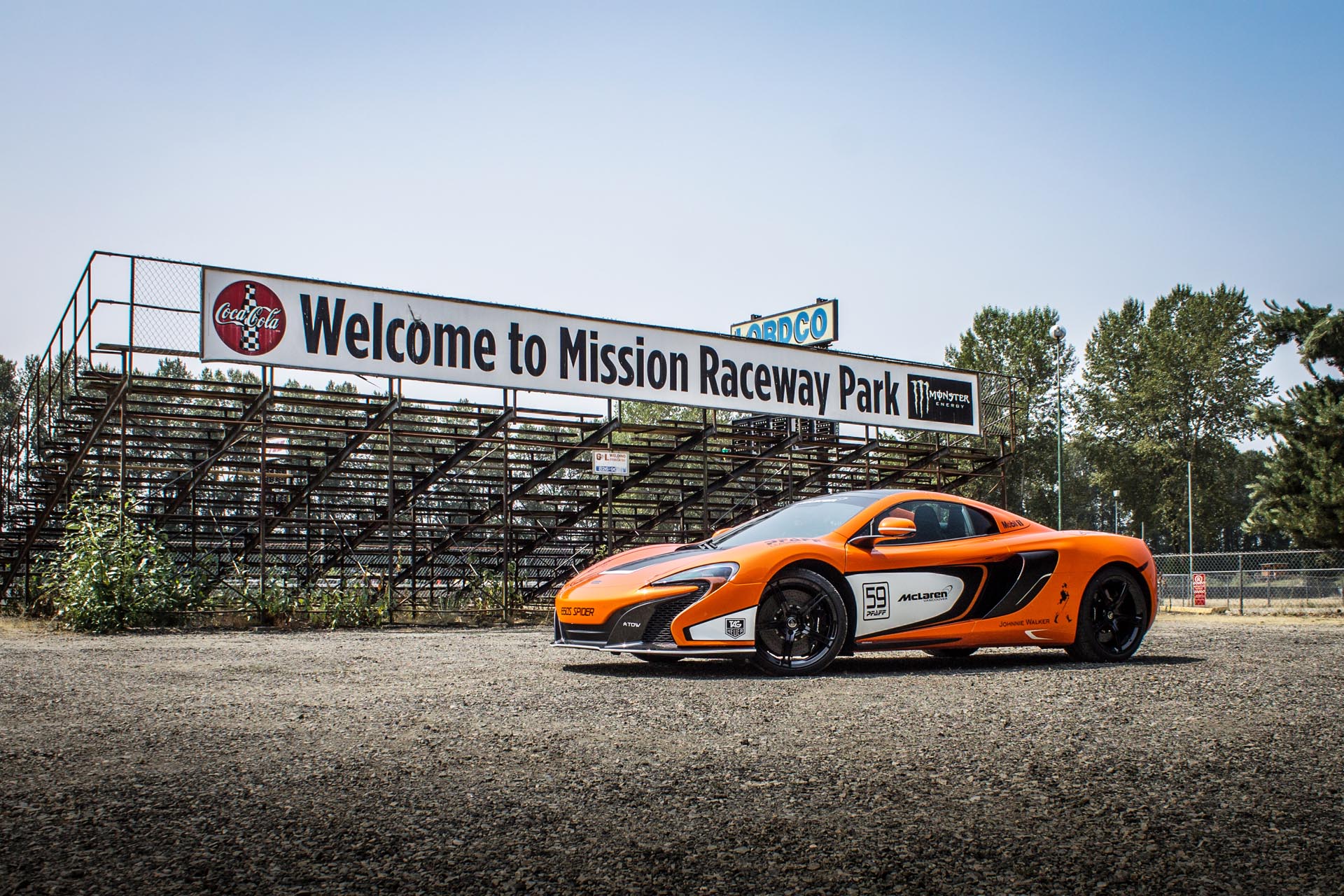 The car I'm driving today could put the boots to any of those purpose-built, professionally driven racers, and do so with the air conditioning running full blast and with my honey-cured hamfists on the wheel. Straight-line acceleration is wonderfully violent, a brief pause as you come off the line, then a hip-shaking Tarantino-directed tarmac massacre, bang into second and hello handcuffs.

At the second speed trap, they've already pulled over some poor sap in a Honda Civic.

I crawl through Eagle Ridge, right along Paddock Drive. Westwood was a pretty interesting circuit back in the day: not much in the way of runoffs, a large pond you could fly into if you misjudged the hairpin, lots of elevation changes and a big hump at Deer's Leap. The quiet little neighbourhood development that now occupies the area still echoes with the ghosts of the past.

So too does this brutally modern machine. Bruce McLaren died more than forty-five years ago, but his legacy is still writ large in the company that bears his name.

He was born in Auckland to parents who owned a service station. His father was a racer at the club level, and Bruce soon embraced that same passion. He started early, entering a hill-climb at the age of fourteen, and his rapid progress did not go unnoticed. Australian racer Jack Brabham noted how quick the young Kiwi was, and got him into F2 racing, and eventually F1, the pinnacle. At the age of 22, McLaren won the US Grand Prix, becoming the then-youngest GP winner. The next year, he came second in the championship to Brabham. He'd also win at Le Mans, in a GT40, as well as his forays into Can-Am racing. 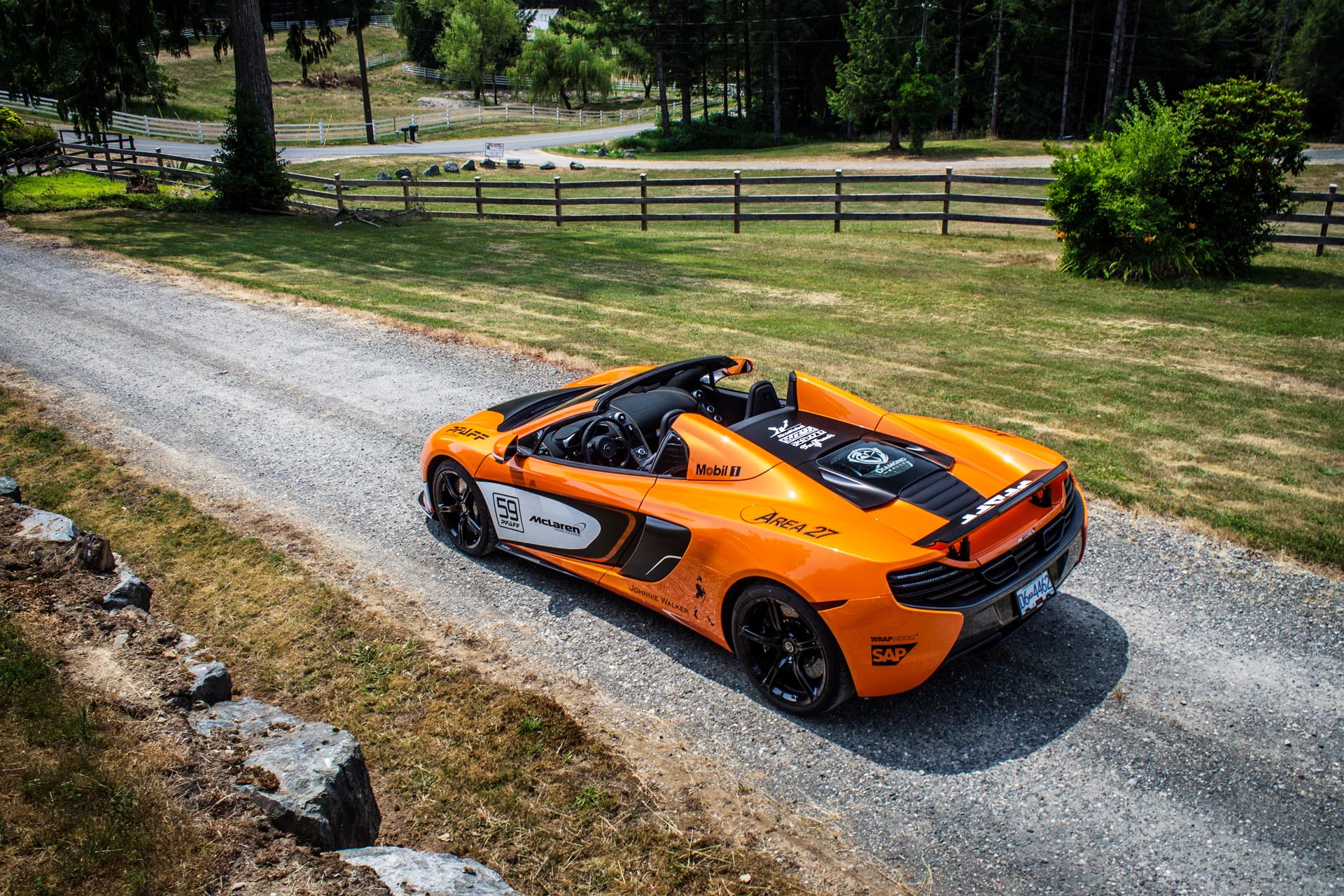 He wasn't just fast, he was clever. There is a famous story about a fuel-filler door that wouldn't stay shut on one of his early prototype cars. Suddenly understanding that air-pressure must be building up behind it, he grabbed a pair of tin shears and cut away the bodywork behind the radiator. The result was an even faster car, and a better understanding of aerodynamics.

McLaren was right at the cutting edge of learning better how cars operated at high speeds. Essentially, he was a mechanical genius, and soon founded his own racing team. Bruce would be one of just two people to ever win a Formula One race in a car bearing his own name. His Can-Am cars would also become entirely dominant, particularly in 1969 when they swept the entire series.

The stylized arc at the end of the McLaren badge on the 650S pays homage to the Kiwi-bird insignia McLaren used to race under. Its orange colour is also a McLaren trademark, and the white and black livery resembles the GT3 racing machine unveiled at Goodwood Festival of Speed last year. 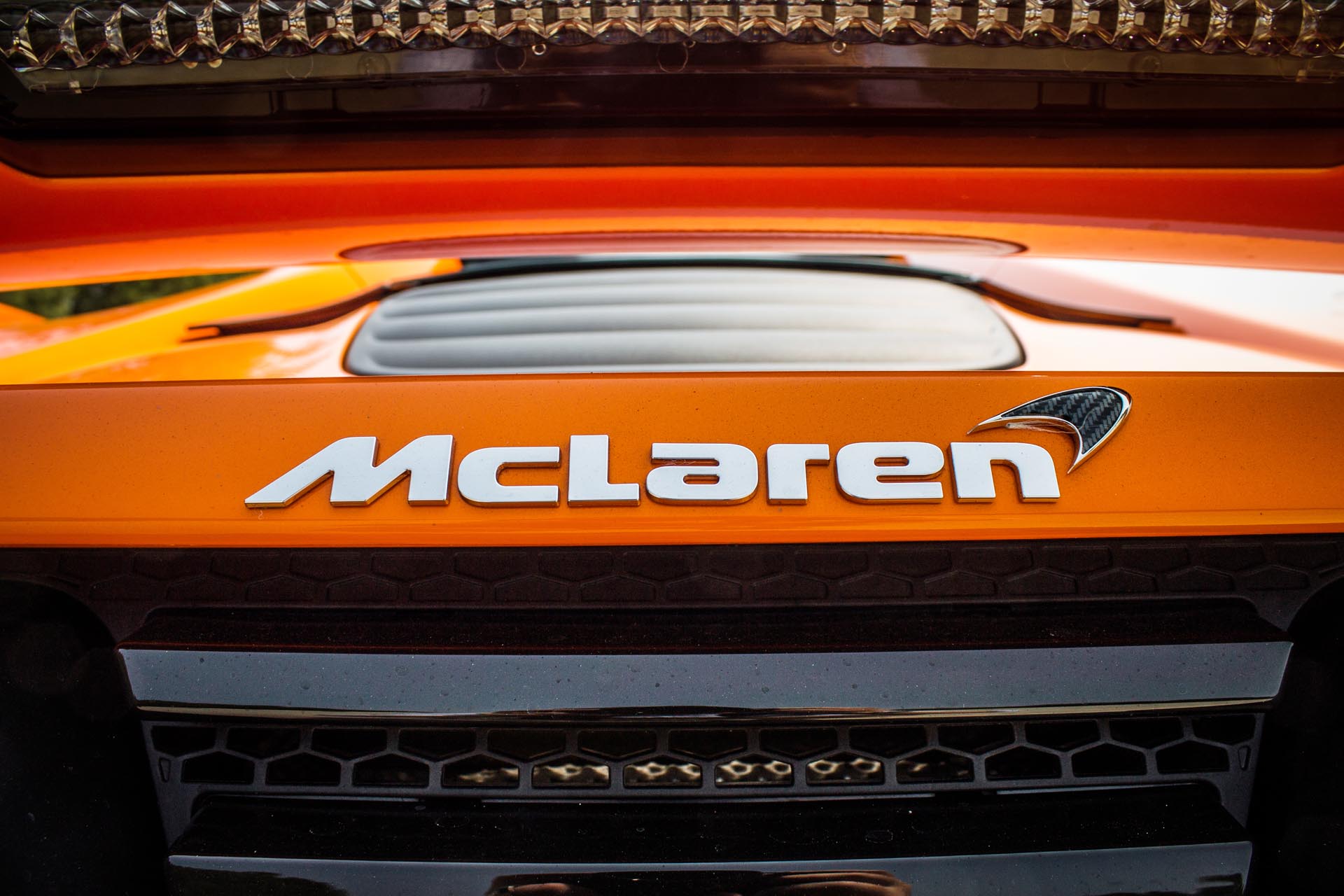 The third speed trap hoves into view as I'm just dawdling out of Maple Ridge. This time, the car doesn't get a second look.

Having wandered around the old Westwood stomping grounds, it's over to Mission Raceway to see where the vintage races now run. There'll be plenty of Formula Ford action to see here come August 22nd and 23rd, as well as sports car racing and many old warhorses swapping stories. It's a fun event.

The 650S is clearly bored as hell with all this sight-seeing, so I let it off the leash on the onramp back towards Chilliwack. It snaps off a couple of hard shifts and then I rein it back in sharply, transferring things from my Active settings (manual shift, sport mode for handling), to full automatic.

The fourth speed trap shows up about five minutes later. I get the sunglasses-stare-down treatment.

I've just enough mileage allotment to sneak this thing home, up into the hills where I grew up. It's the same road I learned to drive on, a mostly-empty ribbon of tarmac that holds no surprises, just a series of corners as familiar as old friends. I slow the car on the valley floor, drop the top and all the windows. Go time.

The McLaren absolutely decimates the road, but full throttle almost never comes into play. It's just too fast, and while the road is totally empty, there are sections where driveways start cropping up. I drive cautiously, in fits and starts, eventually hearing the familiar crunch of my folks' gravel driveway under the tires. “Want to go for a ride, Dad?” 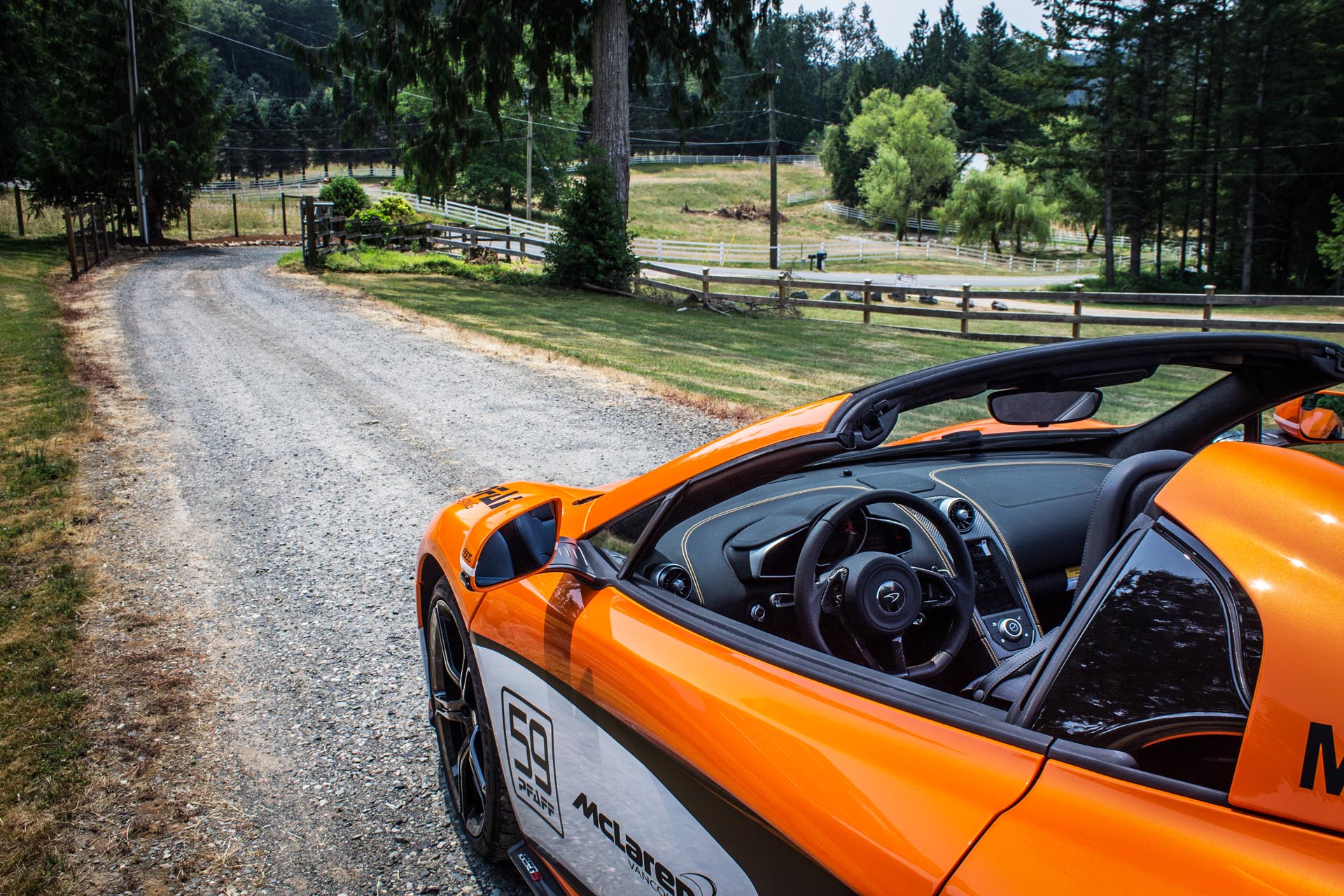 We lambaste the hill I used to bike down with my brother, and then continue at a more relaxed pace. The 650S is way too much for this road, yet doesn't complain when the surface gets imperfect. It's astoundingly expensive, but I'm not really worried about dinging it – it's no more difficult to place on the road than an Acura NSX. Just, you know, more than twice as powerful.

On the way back, the fifth speed trap emerges, and the curious officer pulls out and follows me for several kilometres. This is not a pleasant experience, as traffic was moving along a few klicks above the nominal limit, and I'm not sure whether it's just my luck to be driving the orange trout in the fish-stream. However, he pulls over after a bit and I continue on.

One more ride to sneak in. My friend John is still at his high school, setting up next year's timetable. We sneak out for a quick session of minor deliquincy, chatting about my new arrival and his boisterous brood, and then it's back on the highway to the city, headed for downtown.

I count two more speed traps on the way in. 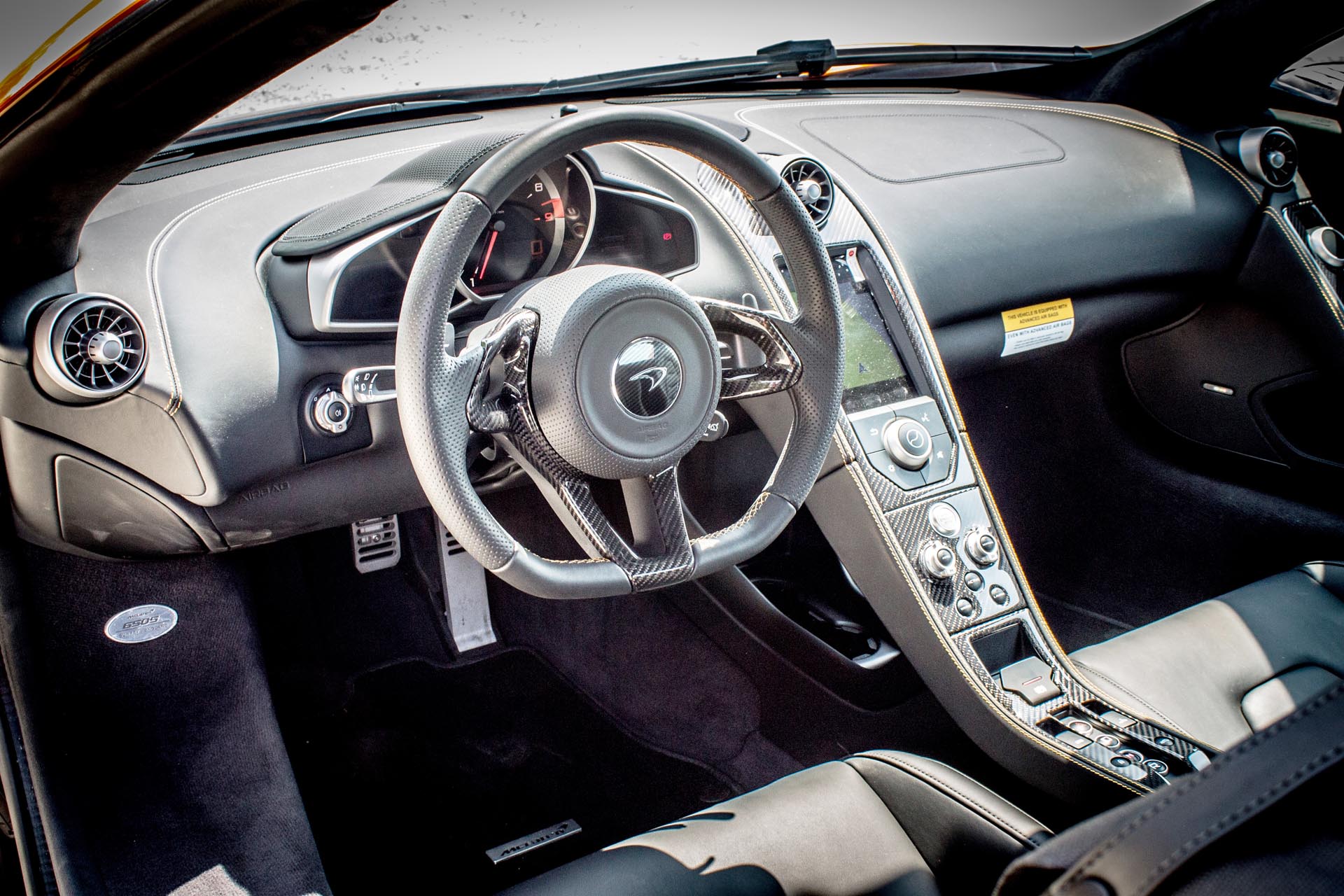 Coming over the Port Mann, my iPod kicks off into Oasis' Rock n' Roll Star. For all my jaded view of the supercar thing, it's a pretty great feeling to be piloting this machine through the strobing shadows, way out in front of traffic. “I need some time in the sunshine,” Liam Gallagher rasps, “I've gotta’ slow it right down. The day's moving just too fast for me.”

Finally, the off-ramp and a brief skirting through the Downtown Eastside and through the Southern tip of Downtown. I sweep up in an arc towards the Granville street bridge. No traffic – one more blip of speed in the empty three lane smoothness.

Discretion is the better part of valour, I figure, this close to the stopping point. I crest the rise, see a bit of traffic ahead. A guy in an Audi RS5 is angrily remonstrating with a couple of Vancouver PD members. Speed trap number eight.

So, some mixed feelings. Obviously this beast is the entire package: blitzing speed, gorgeous looks; an eyeball magnet that's just as fast as it appears. It has history, pedigree, rarity, and conspicuous consumption on its side. It's hand-built to customer specification, easy to drive for an amateur, and according to a few race-winning drivers I know, an absolute revelation on the track.

But eight speed traps. In an orange car with 650 hp. And no fines – I should go buy a lottery ticket or something. 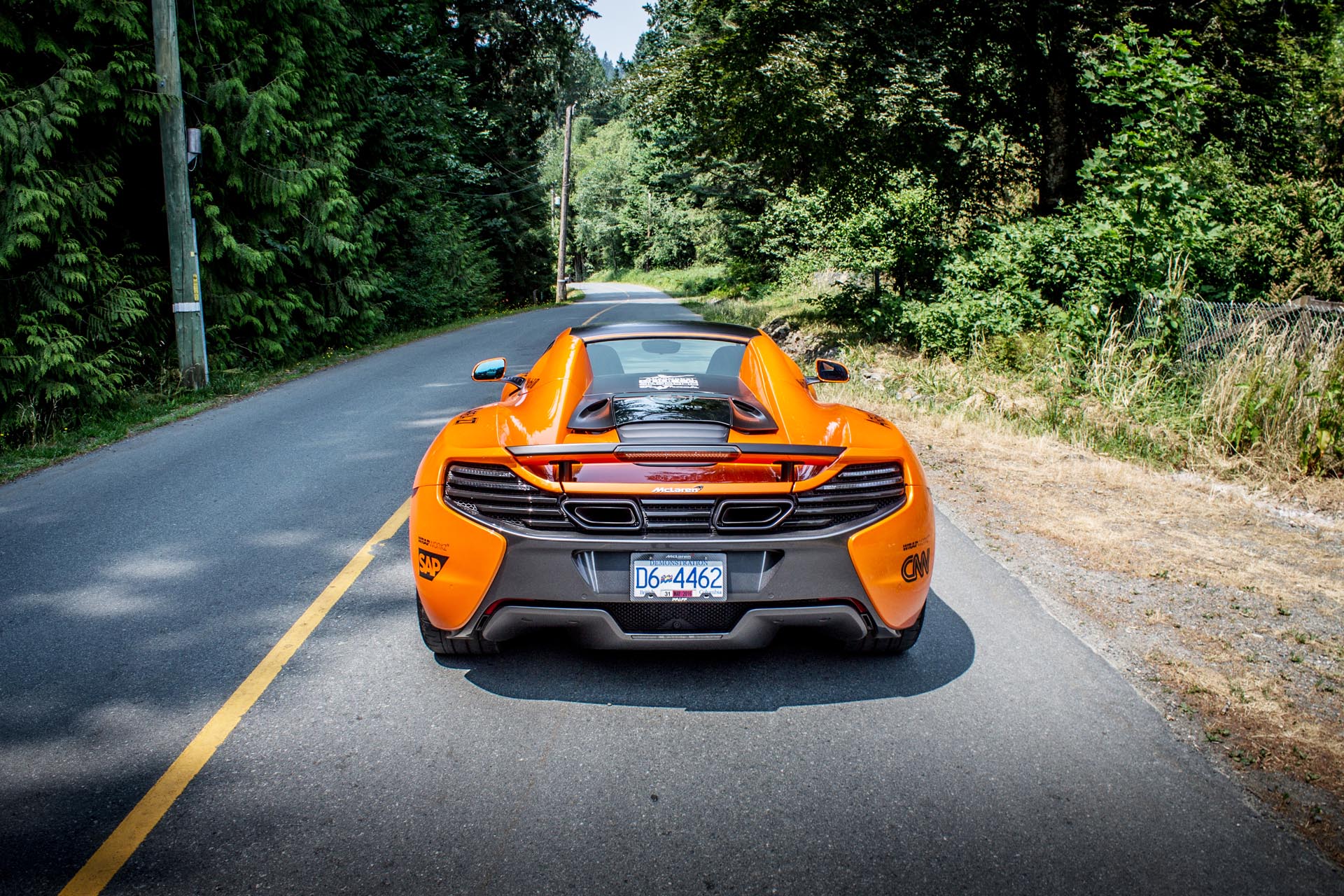 I'll leave you, perhaps, with Bruce McLaren's most-quoted lines, written about the shocking racing death of a friend. “To do something well is so worthwhile that to die trying to do it better cannot be foolhardy. It would be a waste of life to do nothing with one's ability, for I feel that life is measured in achievement, not in years alone.”

It's that kind of car. It's that kind of company. It needs a racetrack to really come alive, and there is one coming for BC, with the Area 27 project. Easterners already have Mosport, following the route taken by Bruce almighty.

On the street, that potential is rarely touched. Bruce McLaren didn't play by the rules, but I had to.

Well. Most of the time.