Mini’s small size was often a big hit on the big and small screen.
Advertisement

Mini’s small size was often a big hit on the big and small screen.

It was in 1959 that the Mini made its debut in a world dominated by the oversize tailfins and other popular features of automobile models. The Mini was more than just a reaction against a popular trend. It had character, it had style, it had a small body perfect for narrow European roadways. It was this last ability, in fact, that 10 years later would win it a permanent place in popular culture that, as proven by its starring role in the multi-million-dollar blockbuster Pixels, it holds to this day. Here are just a few of the Mini's big-screen roles.

A Shot in the Dark 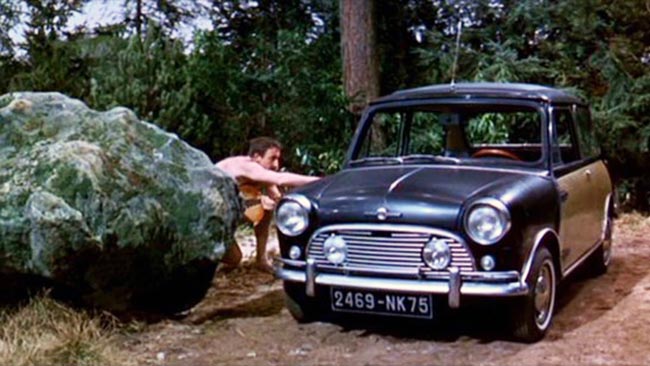 In fact, the Mini made its debut on the big screen in 1964, five years prior to its reputation-making turn in The Italian Job. The car featured in this comedy, which was the second of the Pink Panther series, is best remembered for two reasons. The first is the bizarre wicker side panelling (crafted specially for the film), and the second is a scene in which Inspector Clouseau and his female client escape from a nudist colony and proceed to drive naked through the crowded streets of Paris (it makes a kind of sense within the movie). Sadly, this car meets its demise in the movie's climax, as a bomb intended for Clouseau takes it out. 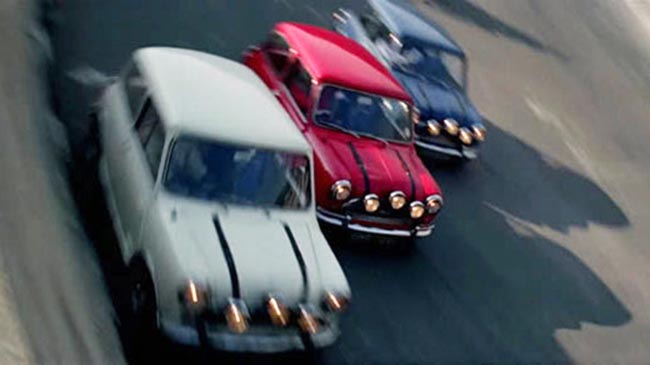 You have to believe that, in the late fifties, when the original Mini was simply a sketch on a drawing board somewhere, the designers never stopped to think, "You know, we should really make sure this is small enough to fit in Italian sewers." Yet the car's ability to do just that is what won it the status of pop-culture icon. Now considered a classic, this 1969 film sees a team of British thieves steal a shipment of gold bullion and transfer tonnes of the precious metal into three Minis. Cue an epic chase scene through the streets, sidewalks, staircases and sewers, with a team of Mafia killers close behind. (Just overlook the fact that the Minis wouldn't be able to move, let alone move fast, loaded with more than their weight in gold.) Nearly 50 years later, the imaginative stunts on display here haven't aged a day. 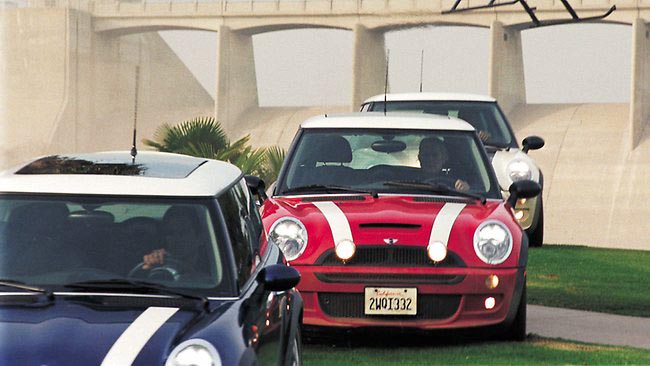 In 2003, when Hollywood decided to update the original movie, the producers wisely realized that the Mini Coopers had been cast members in their own right, just as important as the human actors. It's important to note that this isn't really a remake, as the plot bears very little similarity to the original, with most of the action actually set in Los Angeles. (Only the opening sequence takes place in Italy.) Once again, the climax features a Mini Cooper chase scene, this time in the subway tunnels of L.A. To shoot in those places, where gasoline-powered motors are forbidden, the Coopers had to be specially outfitted with electric motors. Now that's a collector's item. 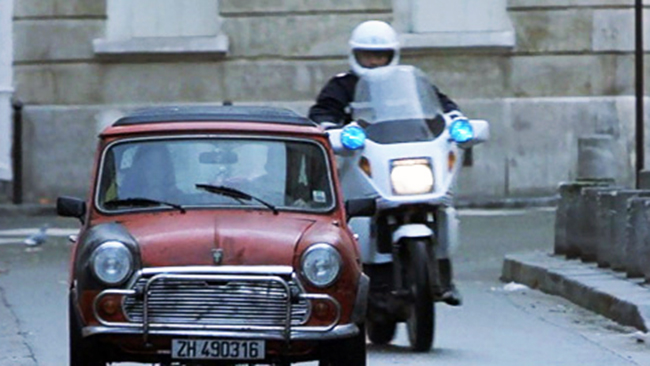 Does this chase scene outdo the one in The Italian Job? Is that silver-screen blasphemy? Okay, but it's at least a close second. This time, amnesiac superspy Jason Bourne (Matt Damon) leaps into a Mini Cooper and outruns the Parisian police motorcycle force by, among other incredible stunts, zipping down a long staircase and racing headlong into oncoming traffic, all while his unfortunate passenger does her best not to vomit and/or faint. Supposedly, if you're familiar with the layout of Paris's streets, the chase will make no sense because it was shot in segments that skipped around the town, but who cares? The real pleasure is watching a full-speed chase through tight spots and sharp turns which only a Mini could handle. 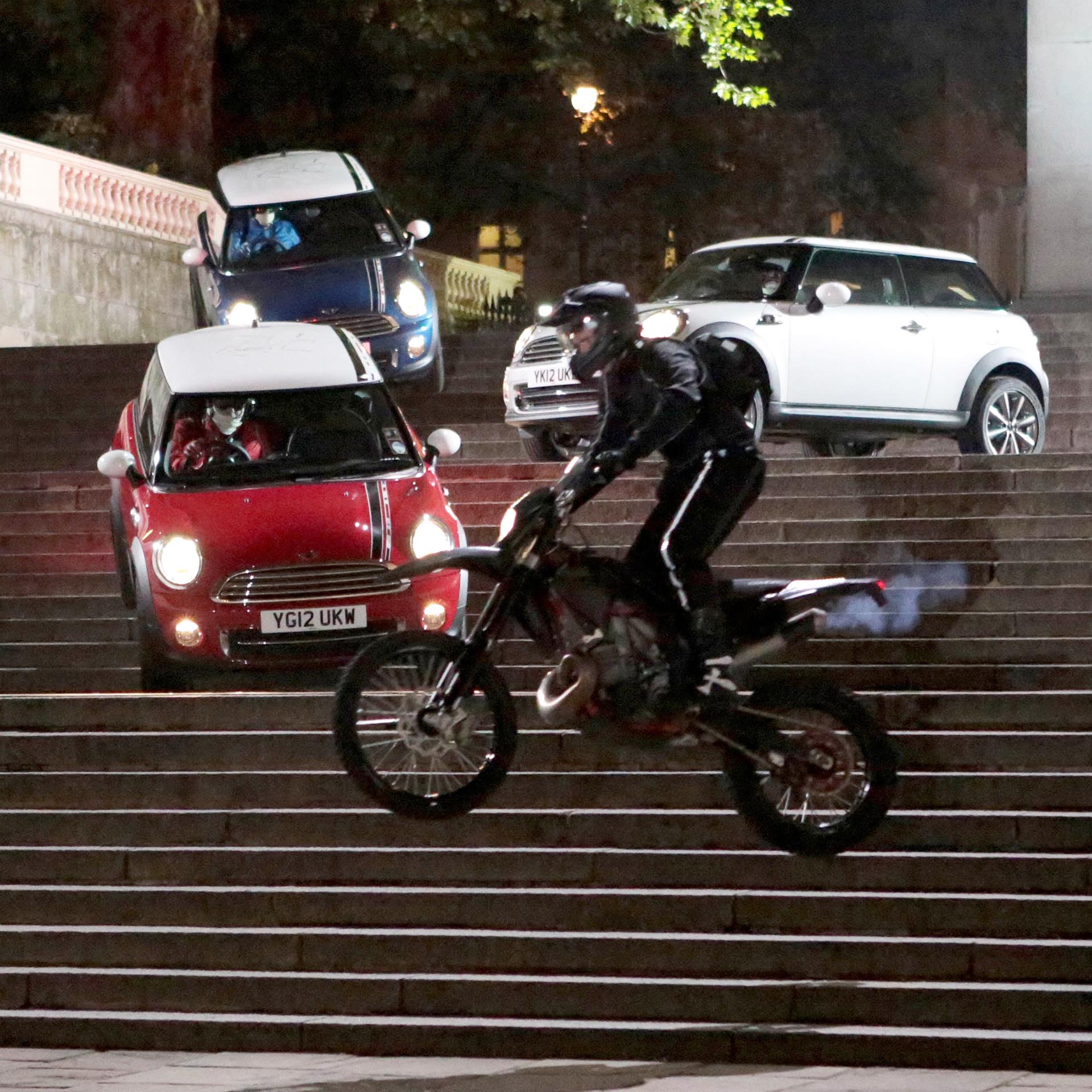 Anyone who loves the chases from The Italian Job or The Bourne Identity, but feels they could have been improved had Big Ben been in the background, check this out. In 2012, Mini UK created this five-and-a-half minute mini-movie to promote that summer's Olympic Games in London by staging a chase through that city's streets, pedestrian tunnels and parking-lot ramps. The movie, featuring several top British athletes, can be viewed in its entirety here. 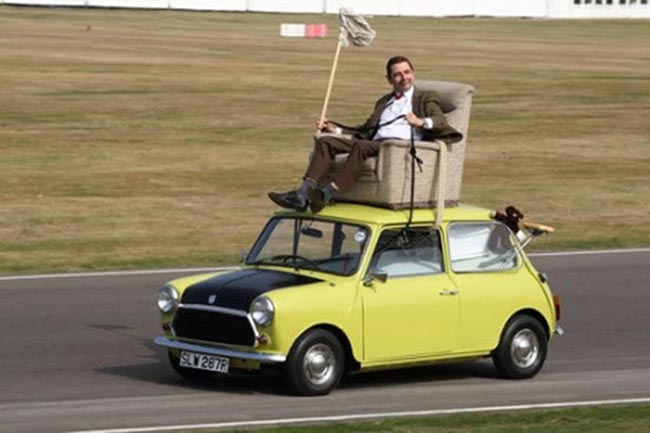 As much as his brown tweed suit and red necktie, Mr. Bean's Mini is a large part of his identity, in both his TV series and his two films. In fact, the car is a reflection of his identity. At first glance, Mr. Bean may look nerdy and small, but scratch away that surface and you'll discover a layer of cleverness that always finds a way to come out on top. Appearances can be deceptive. 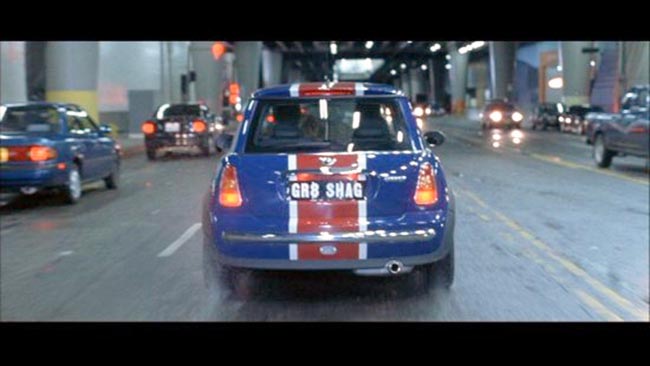 In his first movie, British superspy Austin Powers debuted his Union Jack-painted Jaguar, aka the "Shaguar." (Funny, but hardly designed to escape attention like you'd assume a spy would want to do.) However, in the third installment, we meet his father, and learn Austin comes by his over-the-top ostentatiousness perfectly honestly. Old Man Powers, it turns out, is just as flashy: he drives a similarly flag-detailed Mini Cooper, sporting the licence plate "GR8SHAG." 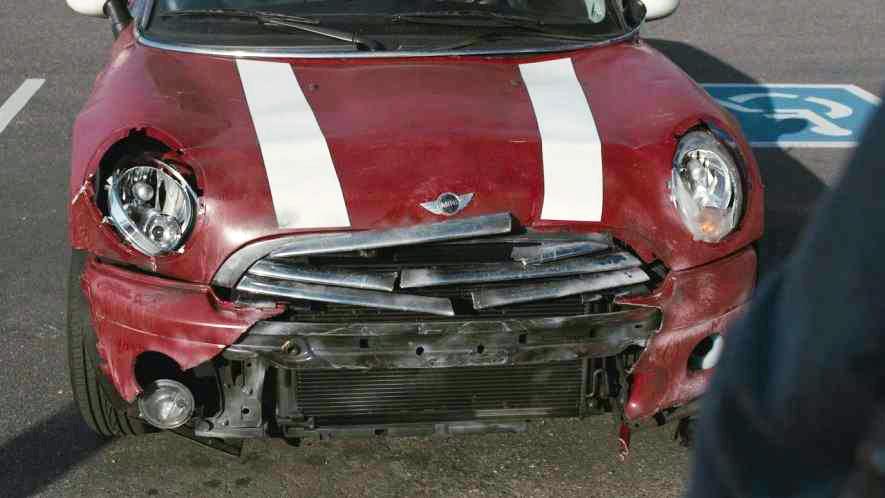 In the 2003 version of The Italian Job, Charlize Theron zipped around in a Mini with great skill, but her character had no such luck in this 2011 drama. This time, her hapless character puts her poor car through a beating, and in fact the final scene is Theron's character contemplating the state of her banged-up Mini as a metaphor for her entire life. 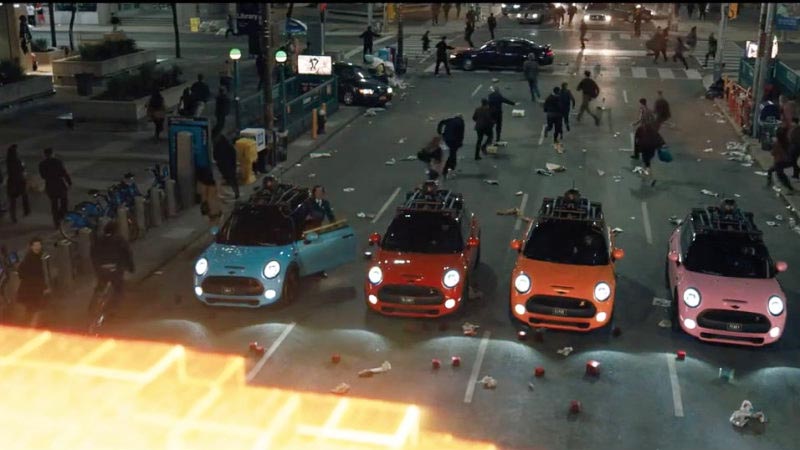 This time, the Mini faces the biggest challenge of its movie career: Saving the entire world. In this summer 2015 blockbuster, alien weapons take the form of classic videogame characters and attack the world, with Pac-Man gobbling up the planet as if it were a giant powerpill. Just when things look their bleakest, four brave souls decide to fight back. Their weapons of choice? Four shiny Minis, each coloured to represent one of Pac-Man's nemesis ghosts. Will they win, or will the world be swallowed by a giant yellow dot? Either way, when they're Minis, you'll actually be cheering for Blinky, Pinky, Inky and Clyde.