Goof of the Month: A Tow for a Tow Truck This month’s culprit made a dangerous judgment call that could have caused an accident.

This month’s culprit made a dangerous judgment call that could have caused an accident.

Welcome to Goof of the Month! Every month, we ask for stories from our network of mechanic pals which highlight the need to understand one’s vehicle, how to maintain it, and how it works. We read the submissions, check out the stories, and pick the winner, announcing the monthly Goof in our regular column about the most mechanically declined folks on the road today.

This month’s frightening story came to us from mechanic Brian Early, of Whitby, Ontario, who reports that his client, a tow truck owner, heard a nasty sound, convinced himself it was something relatively minor, and then learned otherwise.

This client came in to Early’s shop complaining of a noise that he had self-diagnosed as a bad u-joint. This component is part of the driveline in many trucks, and when a u-joint wears out, it can cause a banging or tapping noise, or a squeak or vibration, until it’s replaced. Fairly standard stuff, and not a huge hazard on its own. 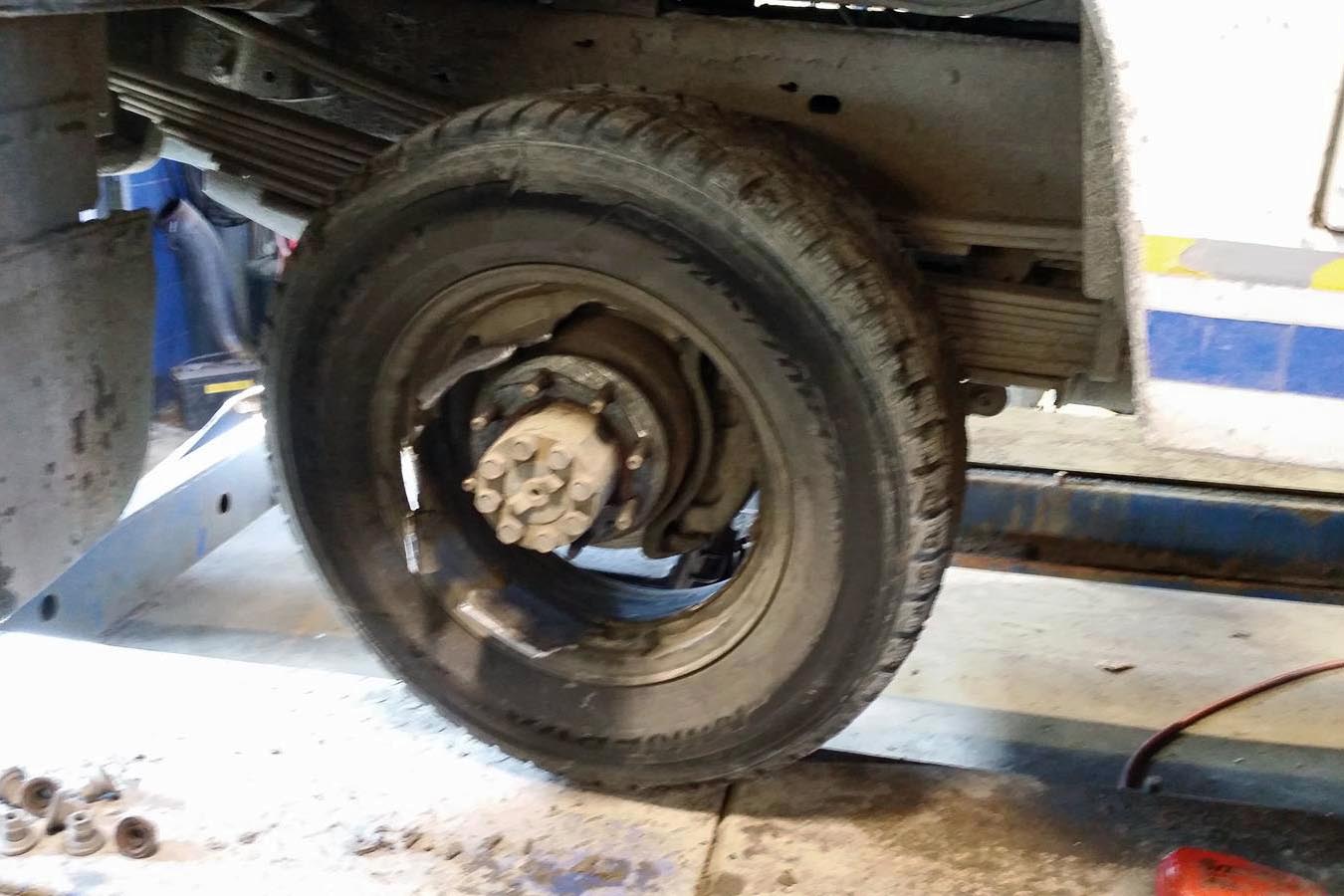 “The client heard the sound, and figured it was a u-joint failing,” said Early. “That’s not uncommon. He limped the truck to our shop, at least a 30 kilometer drive, but who knows how long his truck was making this noise before he decided to bring it in.”

“We had a look. It was a nasty surprise. This tow truck was a ‘dually’, with dual rear wheels on each side. This means one wheel is bolted to the other via a flange. Turns out, that wheel flange mounting surface was fatigued, and failed massively, meaning the inner rim and wheel had become separated from the flange itself. The wheel couldn’t fall off, since it was held captive between the outer wheel, and the springs, and the truck frame.”

The noise wasn’t a failed u-joint, but something much worse. This tow truck had basically been driving around with one of its wheels detached, though still held somewhat in place, by parts of the truck. Driving around with a wheel smacking about is a whole heap of danger, and the driver should have investigated the noise, and then called a tow truck for his tow truck.

The wheel banging into other components could have damaged brake lines, caused a loss of control, damaged the other wheel and tire, or even broken apart and ejected towards another motorist. Had this tow truck been towing something, the resulting accident could have been even more substantial.

“It’s lucky that the inner wheel failed, or the remaining piece of outer wheel and tire would have gone flying off.” Early added, “This was a serious issue.” 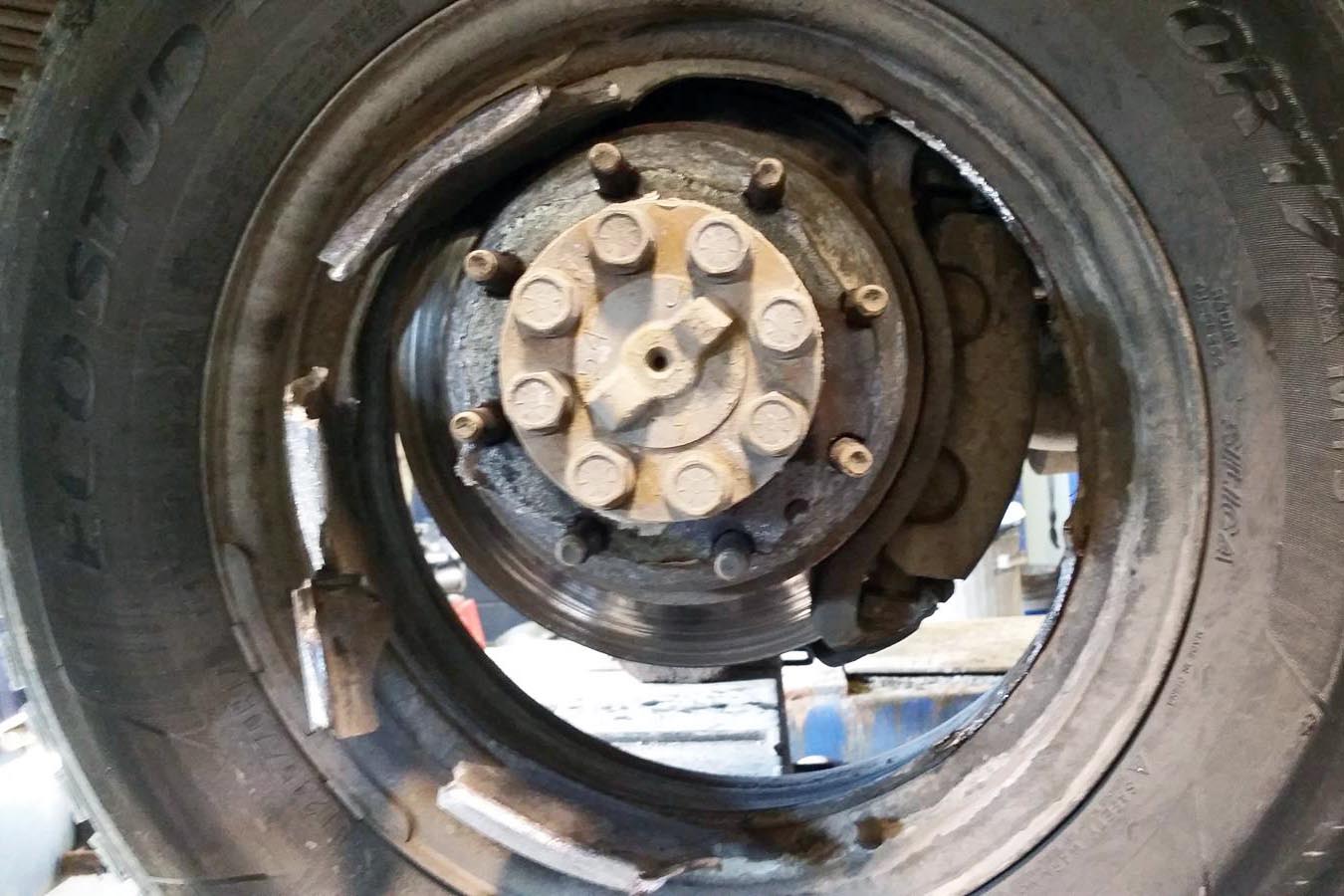 Before long, the errant tire and wheel piece could have broken apart, become dislodged, or caused failure of some other part of the truck to which it was attached. Thankfully, and luckily for motorists near the truck, the busted wheel and tire held in place until it got to the shop.

“Even the brake caliper got machined by the wheel,” Early said, explaining that the repeated high-speed striking of the failed wheel rim against the brake caliper was chewing into it. This could have resulted in brake system failure.

“Both right wheels, and the and hub carrier on that side, ultimately had to be replaced.”

Maintain your ride, especially if it’s used for severe duty activities like towing, on a regular basis. The failure of this part could have been caused by numerous factors – abuse, corrosion, age and more. Presumably, a visual inspection before the failure could have revealed some sign of damage, perhaps cracking or deformation caused by fatigue, and possibly addressed the issue before it got dangerous.