Over the past few years, motorcycles have enjoyed a surge in popularity among celebrities, although the reasons are up for debate.
Advertisement

Over the past few years, motorcycles have enjoyed a surge in popularity among celebrities, although the reasons are up for debate.

Over the past few years, motorcycles have enjoyed a surge in popularity among celebrities, although the reasons are up for debate. Certainly the popularity of the hit show Sons of Anarchy has played its part, but that can't explain why all of a sudden it's easy to spot a superstar on a bike instead of tucked behind the wheel of a sportscar. Here's a small selection of bike-loving stars. 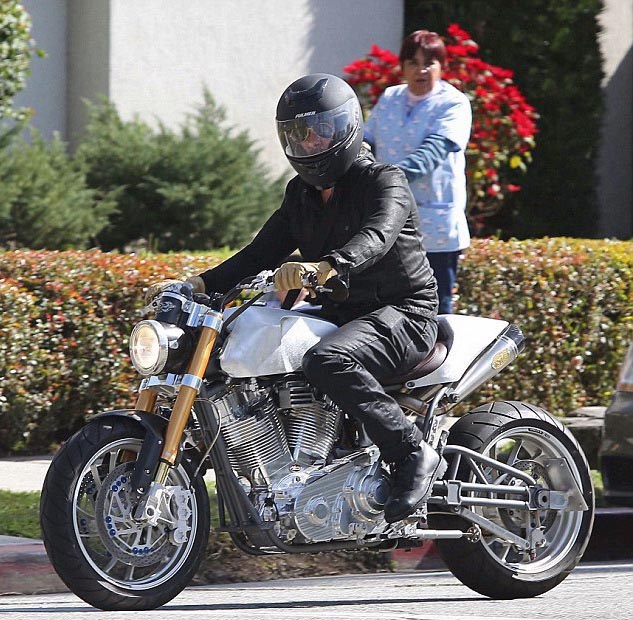 So here's Brad Pitt's life: Once a year or so, he stars in a movie for which he's paid millions of dollars. Subsequently, he travels the world, all expenses paid, on a promotional tour. Throughout, he gets to hear about how 95-100% of the female population think he's the hottest dude who has ever walked the planet, and when back in L.A. he selects a ride from a collection of high-end bikes, including a custom Ecosse Titanium Series XX, reputedly the most expensive bike in the world. Oh, and don't forget, he gets to ride it home to Angelina Jolie. This guy better not complain about anything, ever. 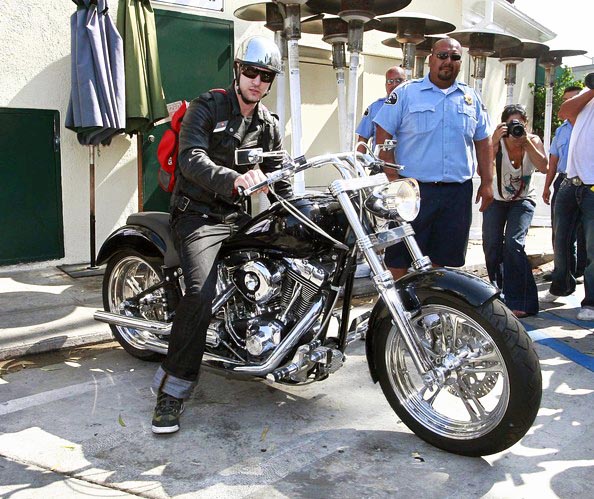 Here's a question: Back in 2000, when *N Sync was top of the bubble-gum charts, if you had asked a Harley-Davidson lover how he'd feel if one of the boy-band members rode around on a "hog," how many seconds would it have taken for him to spit in your face? Times change. Now that Justin Timberlake is a global star with frequent appearances on Saturday Night Live and Jimmy Fallon that instantly become must-see YouTube clips, thereby overcoming any lingering uncoolness related to his boyband days, it's a safe bet that fellow Harley riders now give him the thumbs up. 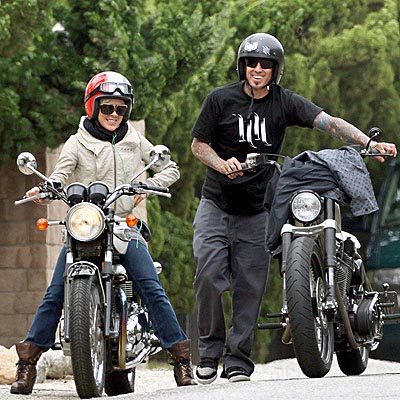 Obviously Pink's husband, motocross racer Carey Hart is going to ride a bike on the streets. That's just who he is. And what she is, is someone it's impossible to imagine sitting behind him with her arms meekly wrapped around his waist. So, she has her own ride, and you know what? I bet she challenges him to races all the time. 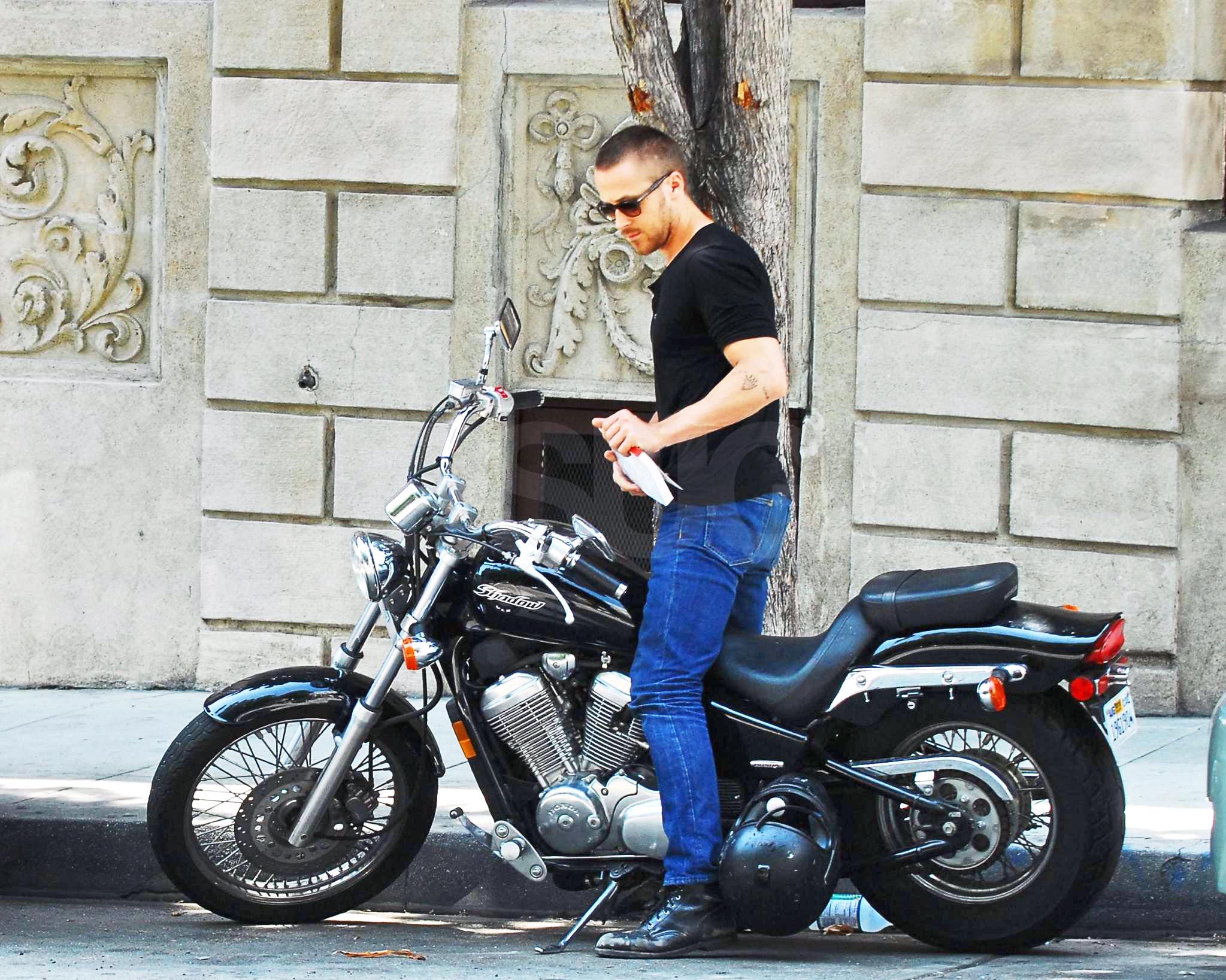 Ryan Gosling is many things: a Canadian, a former Mickey Mouse Club child star, an Oscar-nominee, a heartthrob, a pretty boy who you wouldn't dare call a pretty boy to his face, and, oh yeah, the proud owner of a Honda Shadow. 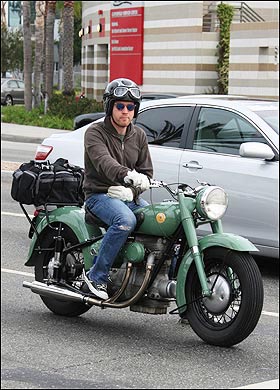 Back in 2004, over the course of 3 1/2 months, Ewan McGregor rode his BMW motorcycle from London to New York, via Europe, Siberia and Canada, covering more than 22,000 miles (35,000km) as chronicled in the TV series and book titled Long Way Round. So it's safe to say the man knows how to handle a bike, even if he doesn't seem quite aware that there's no bridge between Russia and Alaska. But whatever, he got it done. More recently, he was spotted in LA on a vintage Sunbeam bike. 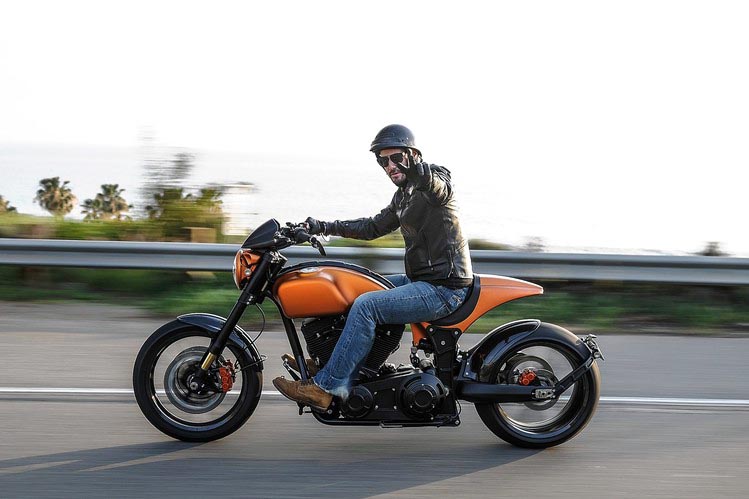 How much of a motorbike lover is Keanu Reeves? He still rides a bike around LA, as he has for the past few decades, but recently he took that passion a big step further. In a move that will let him see the motorbike industry from the inside, Reeves has co-founded Arch Motorcycles, whose first bike will be called the the KRGT-1 (no points for guess what the first two initials stand for). The bike is winning great early reviews, although at $78,000 (US) sticker price it's safe to say you won't be seeing too many of them in the Wal-Mart parking lot. 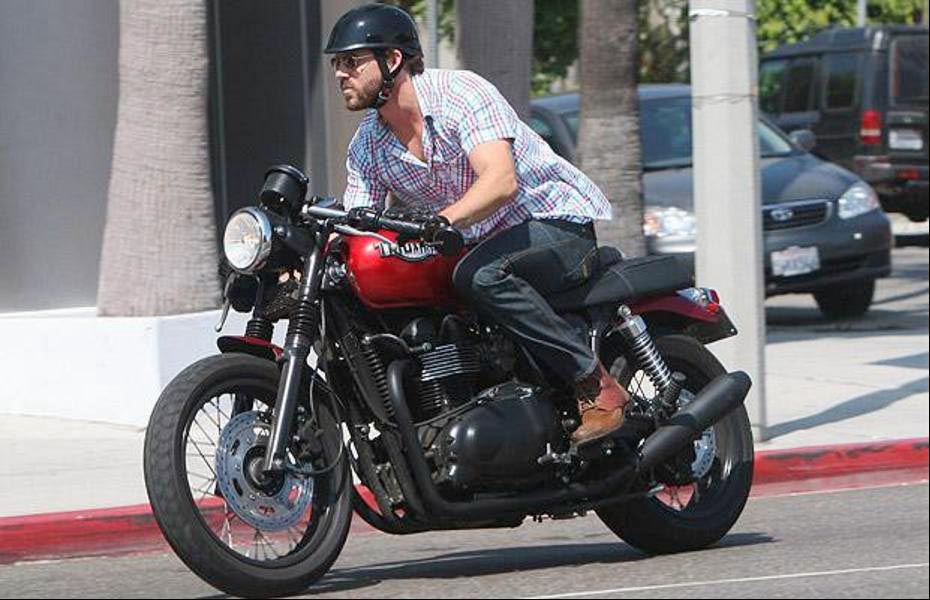 The Canadian star is currently filming the much anticipated Deadpool movie, which will hit screens in 2016. For those who don't know, Deadpool is a tongue-in-cheek, fourth-wall-breaking superhero who cracks jokes during even the most intense action scenes. It's possible the film will include motorbike sequences, and Reynolds could probably film those himself (although, let's face it, the insurance company probably wouldn't let him). Reynolds has honed his skills on a large collection, which includes a Triumph Bonneville and a Ducati. 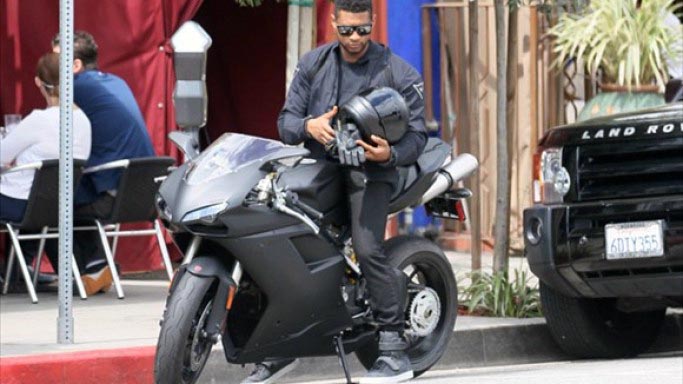 In his 20-year career, Usher has earned well into the nine figures recording his own hit records as well as mentoring the likes of Justin Bieber. As with many people who have so much money they literally cannot spend it all, he has a large collection of vehicles (despite, you know, only being able to drive one at a time). Included in this collection are at least three motorbikes: a Ducati 848 Evo Superbike, a Ducati Monster 1100 Evo, and a custom-built number he's named the Brawler GTC. 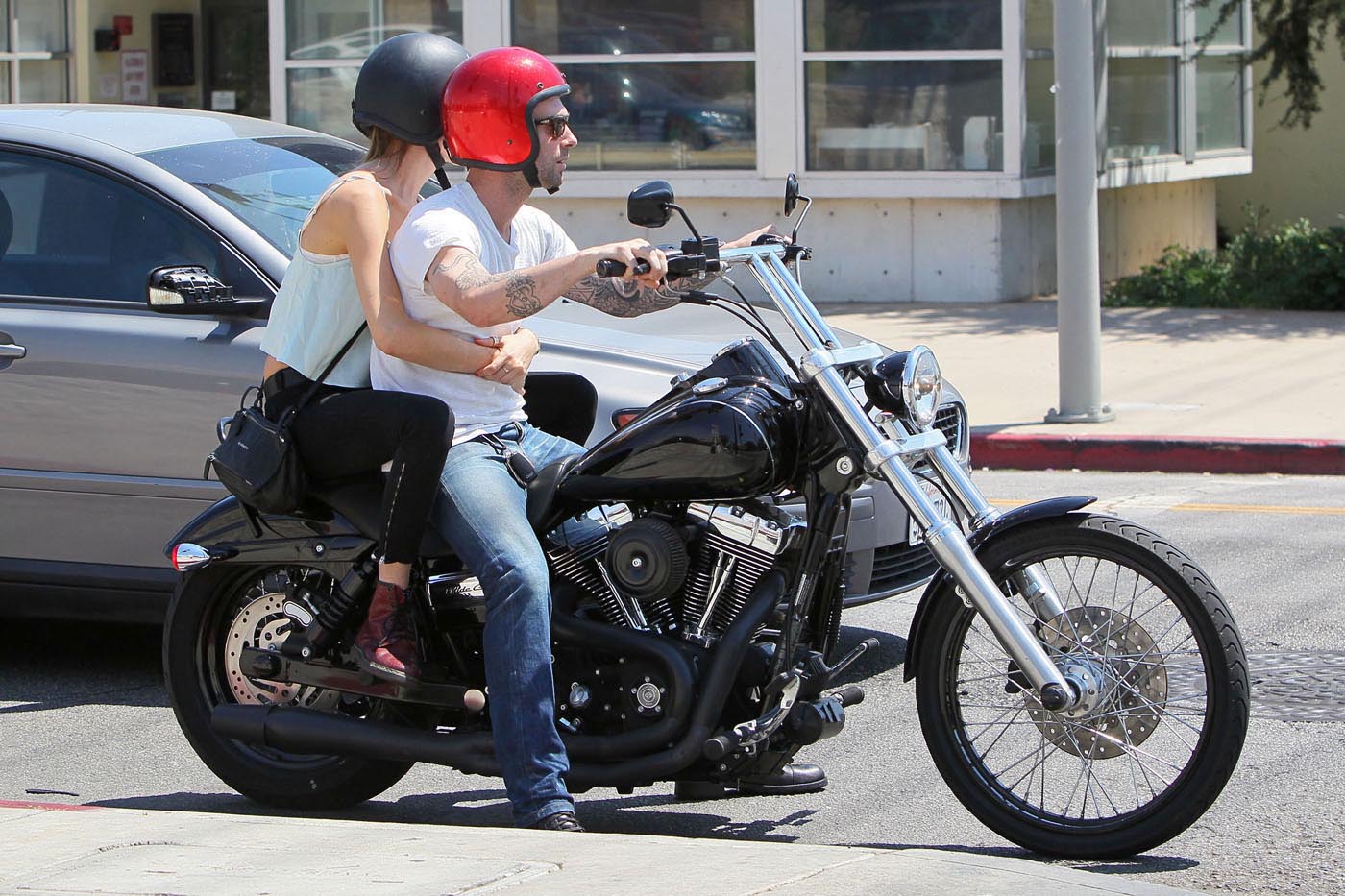 As lead singer and main songwriter for Maroon 5, pop star Adam Levine has a string of major hits. To many pop-culture vultures, he's one of today's coolest entertainers. He's also a motorcycle lover, and isn't above chatting to a passing fan as gets ready to ride away. Now that's cool. 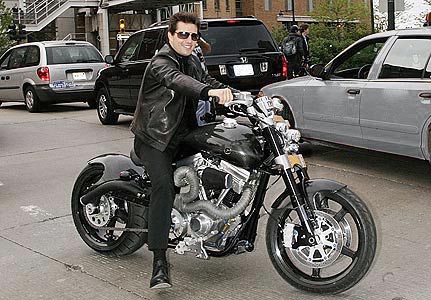 Tom Cruise is arguably the most famous movie star on the planet, and is seen as a leader among celebrity motorcycle enthusiasts. Indeed, he has indulged his passion for bikes on the screen almost as much as he has off – including the new Mission Impossible movie in which he rides a BMW S1000RR. For instance, in one iconic Top Gun scene, his character tore up the road on a Kawasaki GPz900R, while in Knight & Day he performed his own dangerous stunt on a Ducati, with Cameron Diaz clinging on to his back. Speaking of Ducati, in 2008 he purchased the first-ever produced Desmosedici RR, priced at $72,500 (US). Amazingly, that isn't even the most expensive bike in his collection – not even close. He's also the proud owner of a Vyrus 987 C3 4V, which cost him more than $100,000. No wonder even other celebrities look on with envy. 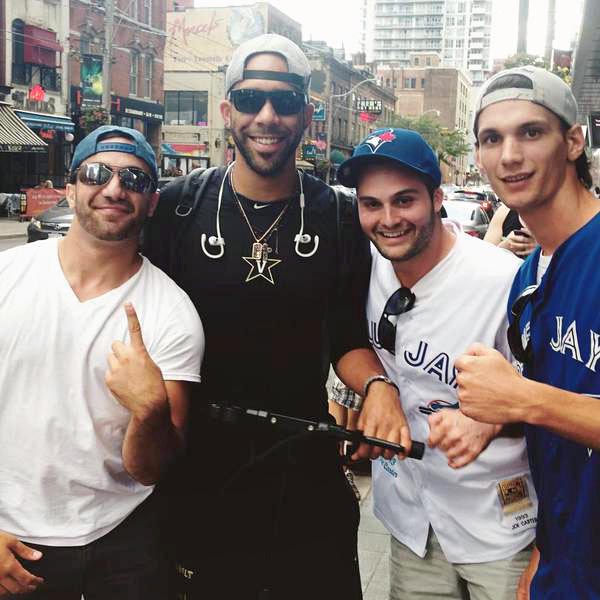 Okay, it's not a motorcycle, but perhaps no two-wheeled motorized vehicle has made a bigger impression in Canada this year than David Price's scooter. Since his trade to the Blue Jays in late July, the ace has charmed fans on the field and off. "It's crazy around here," he told USA Today. "The Canadians are so passionate. I went home on my scooter the other day, and people stopped me so much for pictures, it took me almost two hours to get home, and my scooter almost died." He only lives one-and-a-half miles from the field, by the way. What's more, when Price noticed the envy with which some of his new teammates were eyeing his ride, he went out and bought them each one of their own as a present. 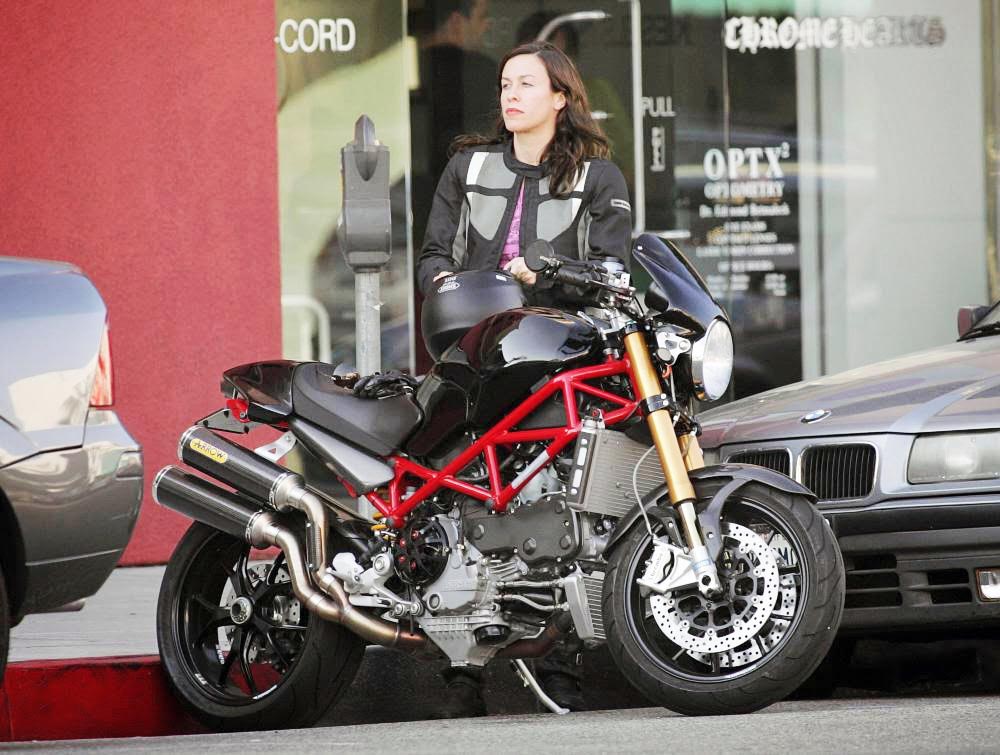 She’s got one hand in her pocket, and the other one is on her motorbike! How can we not include Alanis Morissette in this list? If this photo doesn’t make you a bigger fan of Canada’s best-ever musician then nothing will. Good taste too, that’s a Ducati Monster she’s rocking there.