Once upon a time, having a motor-carriage meant that you likely had a castle, a mansion, or at the very least an abbey. With such a large amount of room to rove about in the stables your great grand-sire had established, one's automobile was preferably of gargantuan size, the bigger the better. Lord Foffington-Hubris von Canyonero III, esq.; that sort of thing.

However, two world wars decimated both the aristocracy and economy of Europe, leaving a need for a people's car that was the exact opposite of the riveted steel behemoths of the past. To get back on their feet, the workers of the world needed a new kind of ride, and the thriftier the better.

Thus, the microcar, tiny in footprint, displacement, purchase price and running costs. It would be these cars that would spur the somewhat autocratic Leonard Lord, head of BMC, to make the pronouncement, “God damn these bloody awful bubble cars!” That's how we got the original Mini Cooper, by the way.

But the microcar was no flash in the pan fad. Indeed, tiny cars have been part of the scenery for years, and as our streets get ever more crowded, it seems like they're here to stay. Here's how they came about, and where they're going. 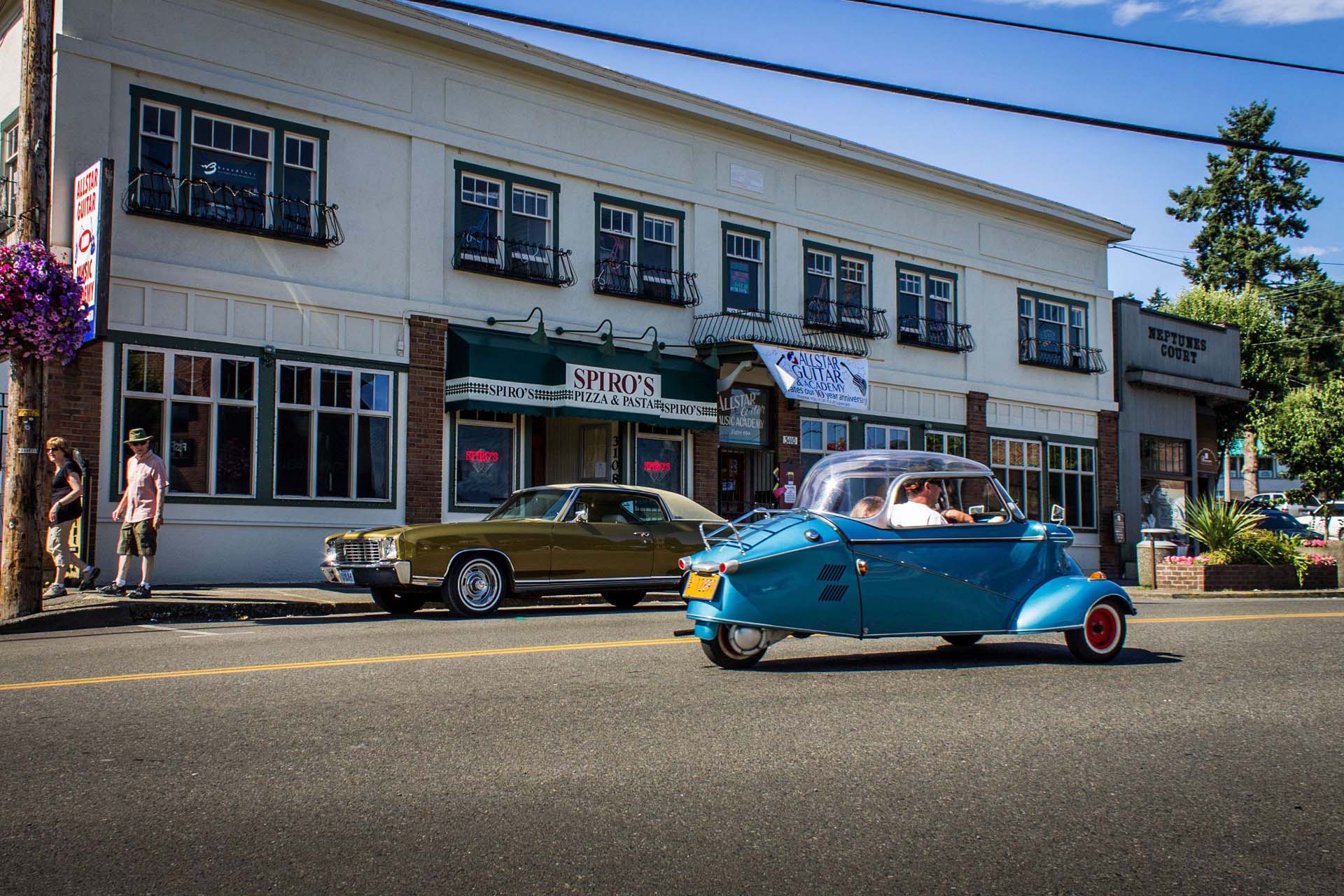 If you were a Spitfire pilot in the 1940s, it's likely the word “Messerschmitt” would have you reaching for your side-arm. However, once the factories of the Third Reich had been blasted into oblivion, the former enemy still needed some way to get around while rebuilding.

With fuel prices high, there were those who would look at something like a VW Beetle and shout, “Ach! Might as well be a Hummer!” No, what was needed was something with a really, really tiny engine.

The result was the Kabinenroller 200, a tandem seater powered by a 191cc two-stroke engine making under 10 hp. Despite being abysmally slow, its resemblance to a fuselage without wings gave it excellent aerodynamic qualities, so it was extremely thrifty. 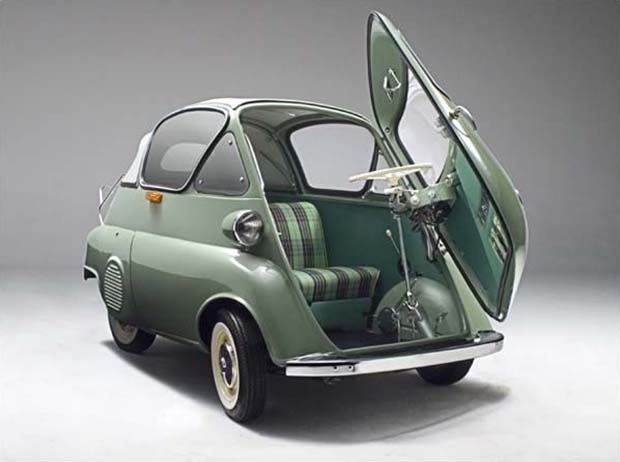 Any time somebody wants to tell you BMW has “lost their way” simply because they've stopped offering a manual transmission in some obscure, rarely sold model, just show them a picture of this little egg-timer. Car companies aren't just about image or heritage, they are about actually selling cars and turning a profit. In post-war Germany, with lederhosen belts severely tightened, profits would have to come from the mass market.

The Isetta has a single door in the front, somewhat like a small, wheeled refrigerator. This is no accident – the original design is thanks to an Italian company called Iso, which made refrigeration equipment. BMW licensed the design and started cranking them out, giving rise to the best-selling single-cylinder motorcar the world has ever seen. Wow!

With again under 10 hp from its 236cc scooter engine, the Isetta was blisteringly slow. To go from 0-50 km/h took a good half minute, and 100 km/h arrived in never. It couldn't go that fast.  However, it did return a stellar 3 L/100 km in mixed driving, and all without fancy plug-in hybrid tech. 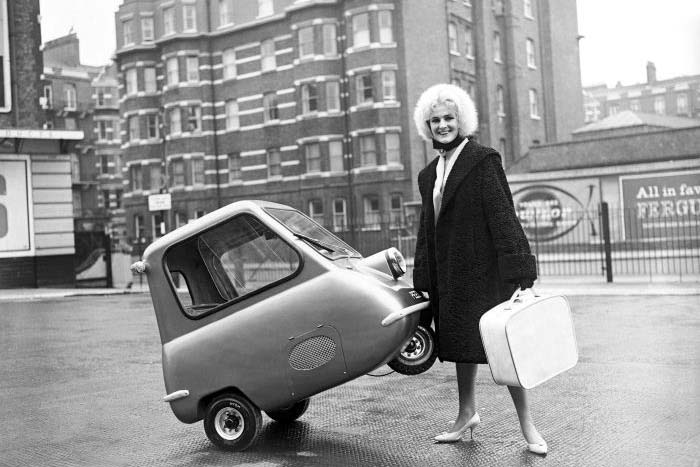 By the 1960s, it appeared people were building microcars not out of practical consideration, but because they felt like it. With the Mini on the scene, hauling four adult passengers, sipping fuel and winning rallies, there seemed not much need for the microcar any more.

Enter the Peel P50, an absurdly small vehicle with one headlight, one door, one windshield wiper, and a seating capacity of one. It also has no reverse gear, but you can pick it up and trundle it around with you. Built on the Isle of Man, almost none of them were sold, and it remains more a Guinness World Record holding anachronism than an actual car. 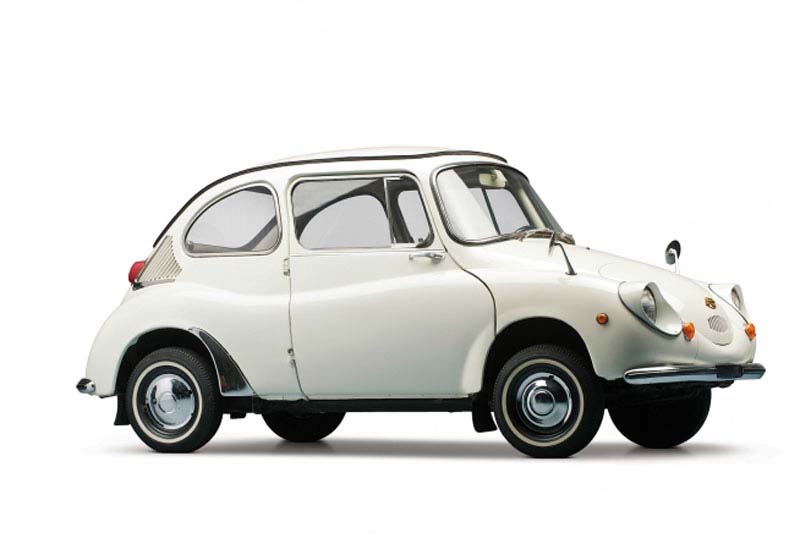 Meanwhile, in Japan, another pressure was being brought to bear on large-displacement cars: taxes. If you wanted to avoid paying large annual road taxes on your machine in the suburbs of Tokyo, why, you simply opted for a kei car.

The rules have changed over the years for Japan's smallest cars, and indeed, they're trying to do away with them entirely. However, it's still an extremely popular segment, and it ended up giving Subaru its first toe-hold in the North American market.

The humble little 360, powered by a 360cc engine, was full of all kinds of quirks (including rear-hinged suicide doors that tended to spring open from time to time). It was slow, and it was small, but it could hit 100 km/h and used very little fuel.

Entrepreneur Malcolm Bricklin imported thousands of them, and soon Subaru had a presence in North America. While they'd move on to larger cars, characterized by all-wheel-drive, Subaru would still offer kei cars in their home market. 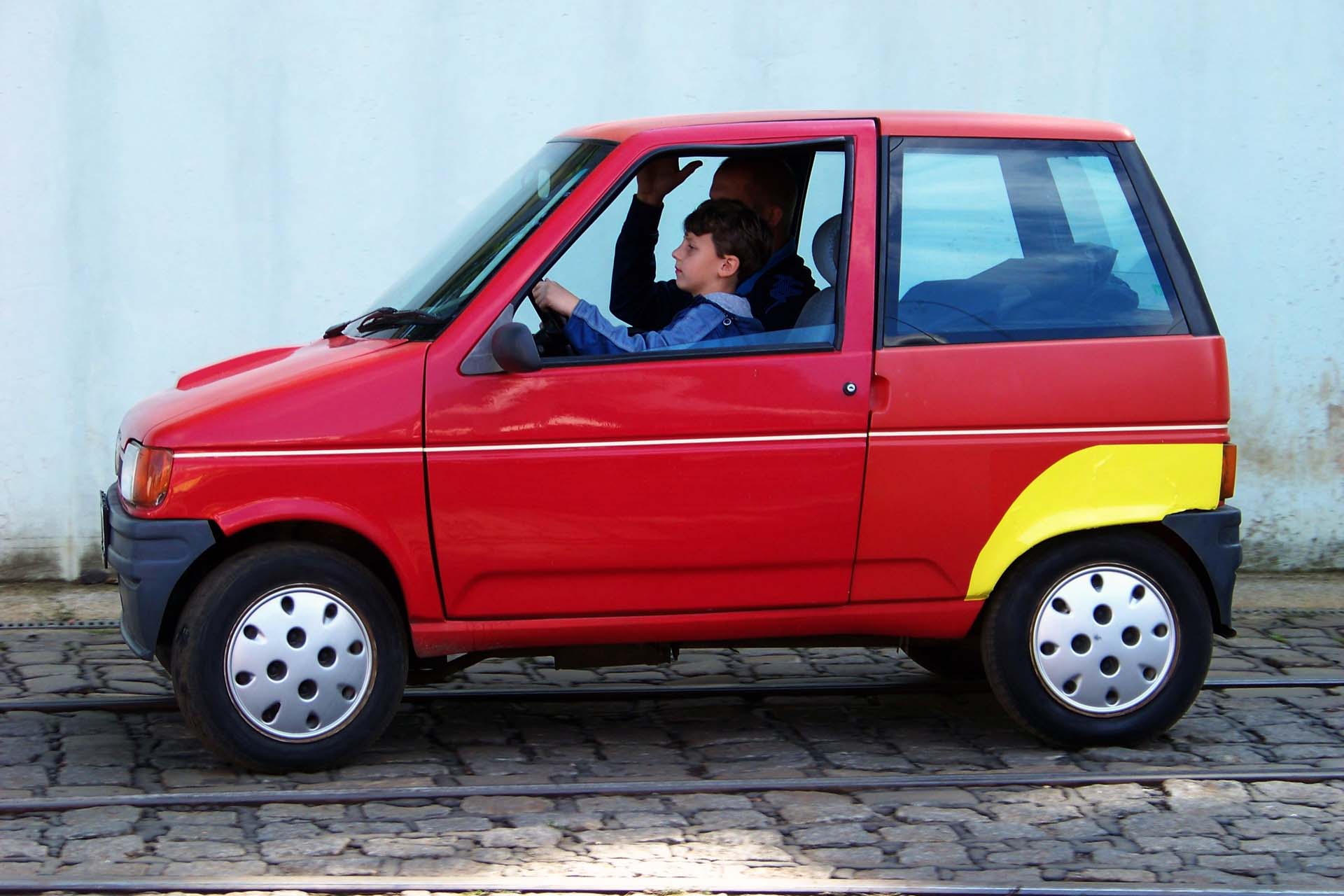 France, home to some of the most built-up metropolitan centres in the world, also knew a thing or two about dodging the bureaucracy. The 2CV was already a very popular car for its small displacement engine, reliability, and overall quirkiness, but you could go even smaller.

Guy Ligier, a famous French Formula One racer, excelled at building both racing cars and tiny little vehicles that fulfilled the requirements of the French sans permis rules. Just as you don't have to have a motorcycle license to ride a scooter, you don't need a full license to drive one of these cars, making them very popular with students and other impecunious types.

The Optima was a fairly boring, utilitarian car with a 50cc engine, but it got the job done. Slowly. 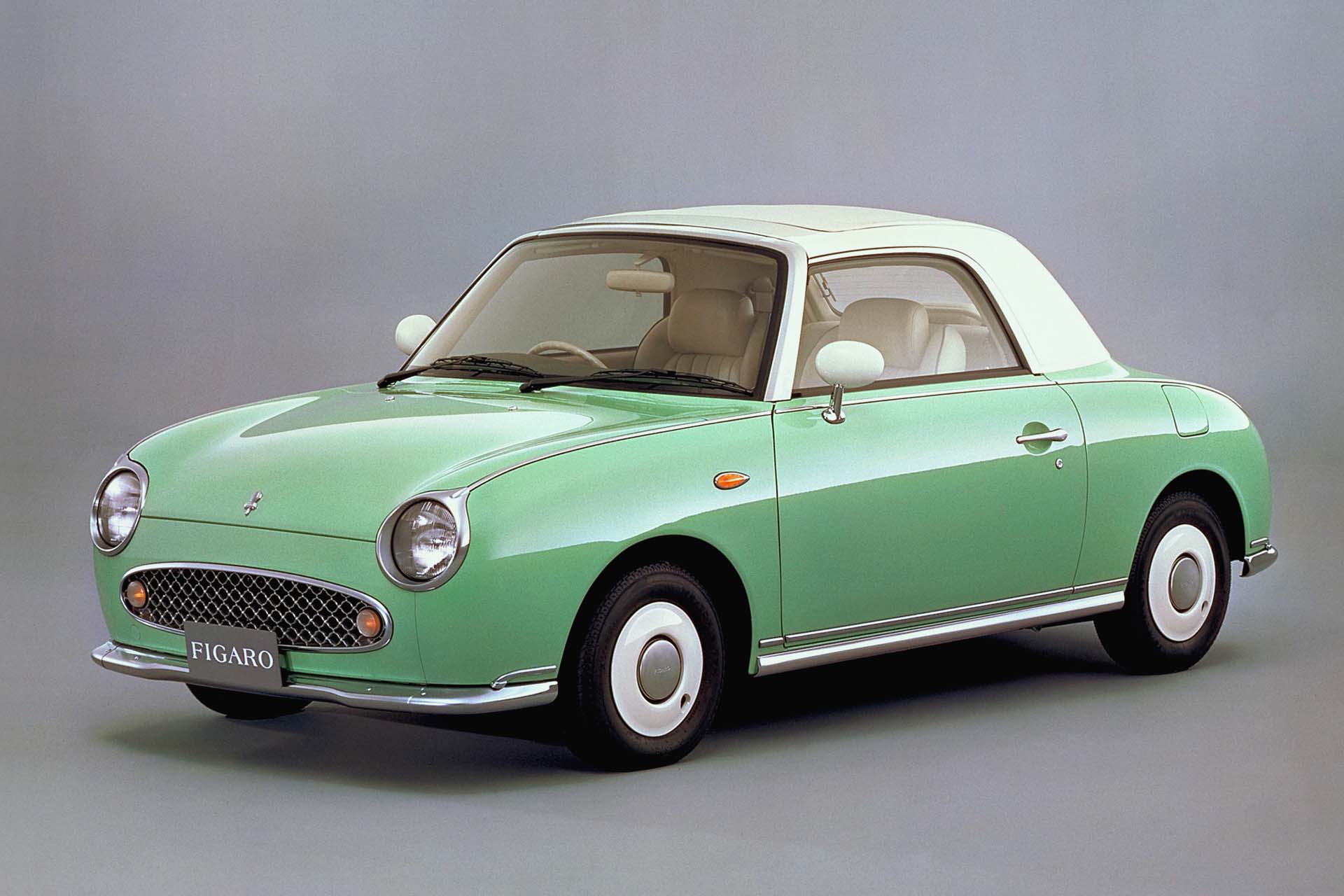 Style was this early 1990s kei car's calling card. Nissan made several tiny, stylish machines based on the March (known better here as the Micra), and the Figaro was probably the most desirable of them all. Eric Clapton even owned one.

A convertible of Lilliputian dimensions, the Figaro was only available with an automatic transmission, and came with a 987cc turbocharged three-cylinder engine that made 73 hp – not bad. It was easy to park, fun to drive and made an argument for the microcar not just as a pint-sized penalty box, but as a fashion statement. 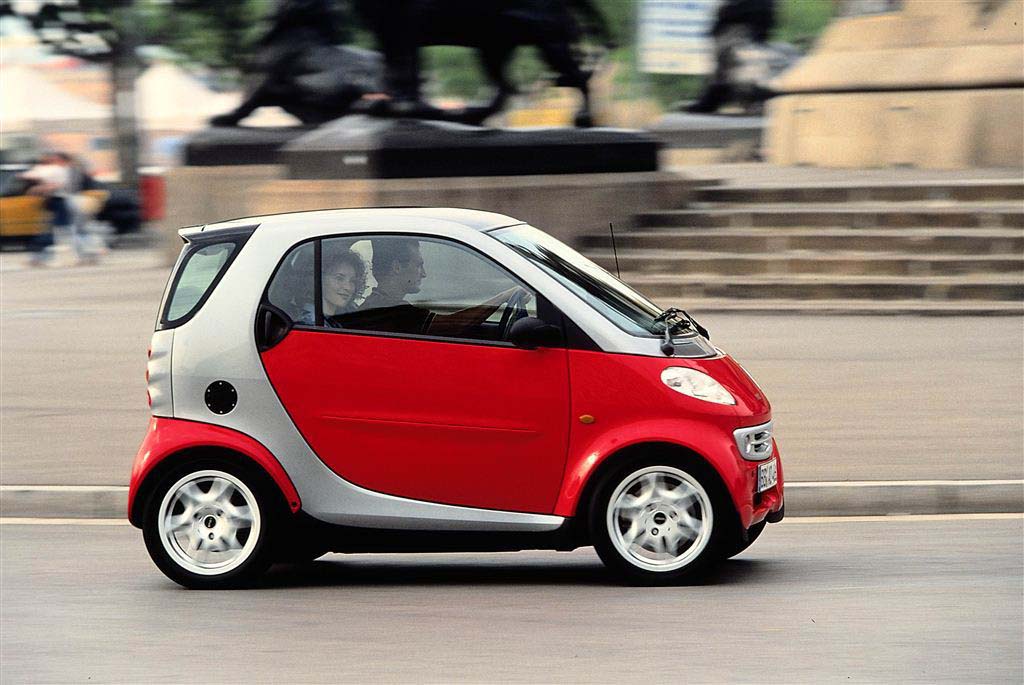 Taking the practicality of its ancient European cousins and wedding it with some much-needed flair, the first Smart two-seater city vehicles emerged in 1998. They'd had a long development period, and while Swatch had initially been involved in the early efforts, the eventual design was more Mercedes-Benz than anything else.

The cars were built in Hambach, France, adding in a little of that French small-car know-how. The name, Smart, comes from an amalgam of Swatch, Mercedes, and Art. Nicholas Hayek, CEO of Swatch, had hoped the little car would be called the Swatchmobile, but Mercedes nixed that.

The first cars got a 599cc engine with a top power output of just 61 hp. The transmission was an automated manual, and probably the least lovable thing about the little car. Still, it got good economy and was easy to park. 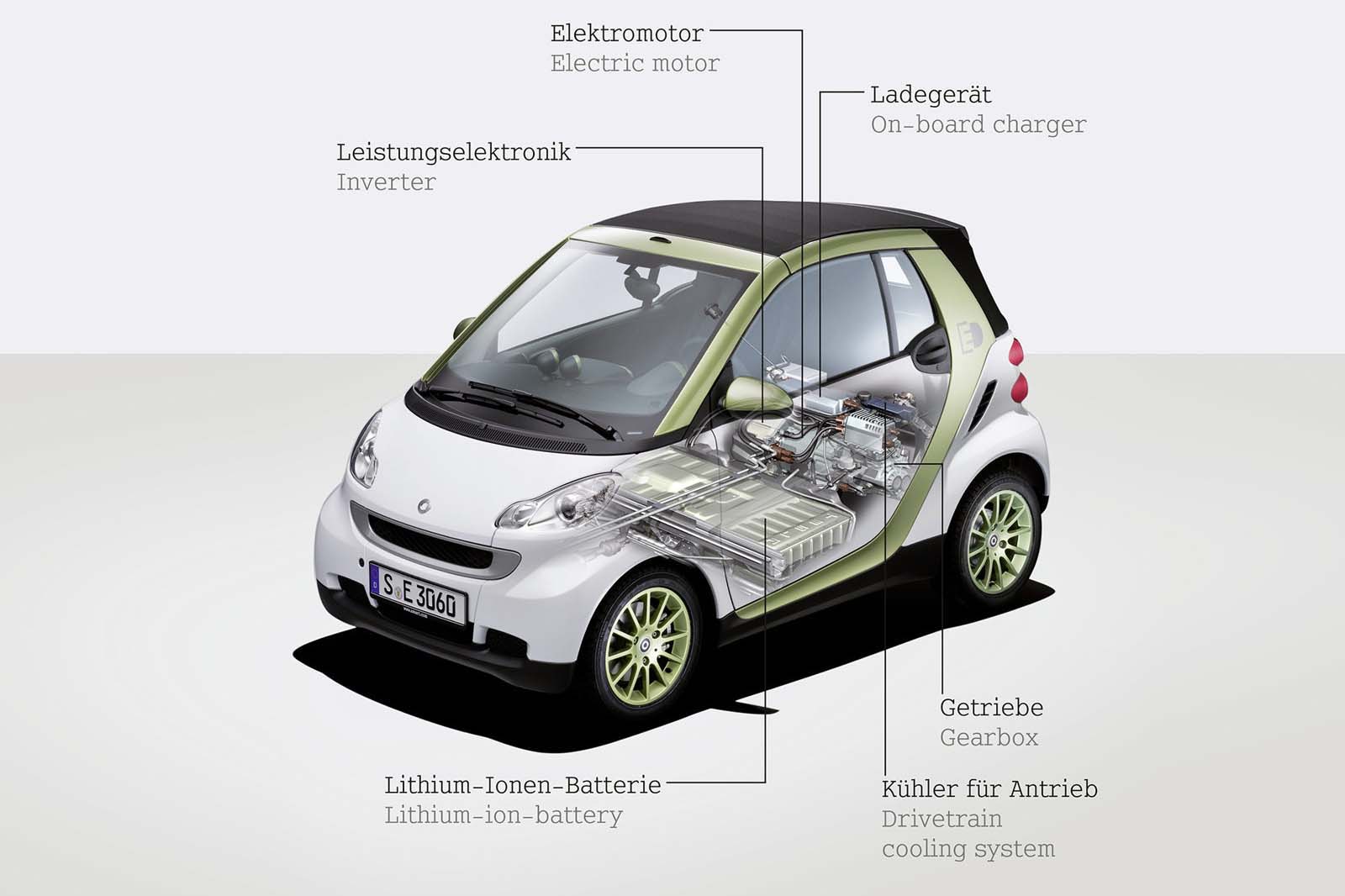 While the original Smart roadsters were fuel misers, especially those fitted with the small-displacement diesel engine, it wouldn't be until the next generation of Smart that North Americans would get something that really made sense. With fuel-prices generally low in Canada and America, and parking relatively plentiful, the Smart had a tough go of it.

However, when an electric drivetrain was introduced, with a range of 145 km, the 74-hp (55-kW) Smart Electric Drive might just be the smartest of them all. Being able to park in the EV-only spaces many municipalities and businesses set aside opens up more free parking, and the performance is as good or better in urban traffic than any other Smart.

No more annoying automated manual – just smooth electric torque. Given that it's an urban vehicle anyway, the short range isn't much of a bother either. 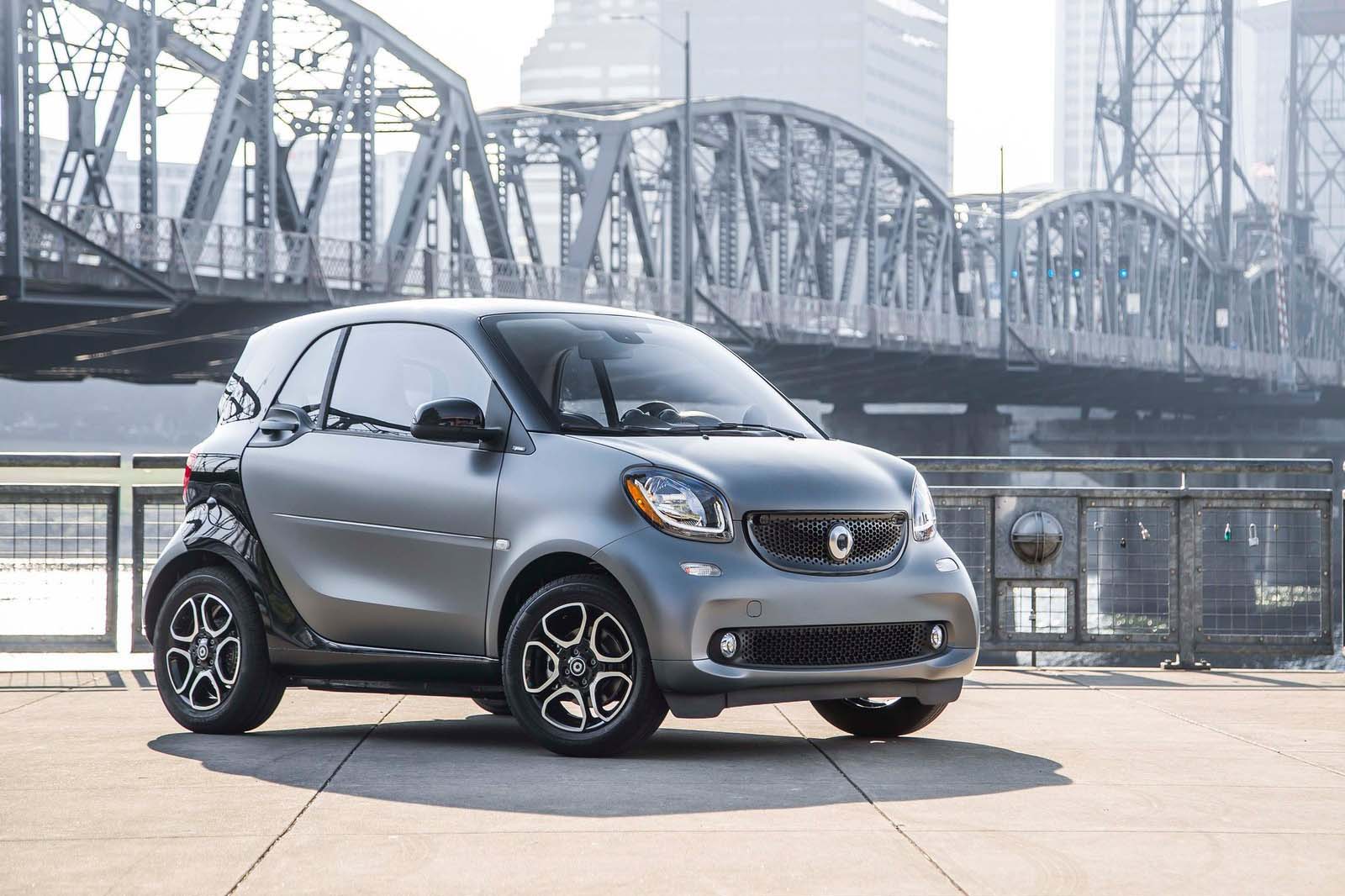 Still pretty much the only microcar in town, at least on this side of the Atlantic and Pacific, the Smart Fortwo has some pretty hefty competition in terms of cheap and economical-to-run cars from Nissan and even Mitsubishi.

However, pure budgetary reasons aren't really why you'd look at the new Smart. It's tighter-turning than ever, able to whip 'round and grab that last parking space in a heartbeat, and while power still remains modest at 89 hp, torque is now up to a hefty turbocharged 100 lb-ft.

Even better, the new, peppier engine is attached to either a genuine five-speed manual transmission, or a dual-clutch six-speed. This latter is so much better than the old automated manual, it's a revelation.

Add in some funky updated interior ergonomics, a smartphone cradle (why doesn't every car have this), and a number of wild colour combinations for the fashion-forward, and you have one stylish little urban runabout. Again, penny-pinchers might want to look elsewhere, but the new Fortwo takes microcar conventions and turns them on their head. It's lots of fun to drive, easy to maneuver around city streets, and has an outsized personality despite its toon-town dimensions. Sounds Smart to me.