Rain – the great equalizer. Or, in my case, “time to set everything to Easy and use other cars to course-correct.” I’m not sure my Drivatar rating will ever recover. My hard-won advice? Pick the Formula E car, turn on all the assists and embrace the chaos. Even offline, the first few turns will see at least a quarter of your fellow drivers careening off the track. So sit back, maybe hit pause and jump into Photo Mode for a few action shots, and resist the urge to enter the fray.

Rain, along with nighttime racing, are new challenges you’ll face in the simulation-style Forza Motorsport 6. We previously examined the technical aspect of these features, and they certainly make for pretty screenshots.

In action, however, you won’t have time appreciate the austere beauty of the Ferris wheel at Le Mans all lit up against the twilight, no, you’ll be too busy with thoughts like “Where did that turn come from?” when your trusty racing line disappears under the glare of your headlights. Or instances where you muse, “I’ve seen Lewis Hamilton go into a tire wall with less rain on the track and he does this for a living!”

Turn on the electronic assists, however, and life becomes significantly more zen. Sure, the controller will rumble and the brakes will squeal but you’ll stay on the track for a change. The beauty of a game like Forza 6 is that you’re free to adjust the settings to suit your taste (and abilities).

And what a game it is. 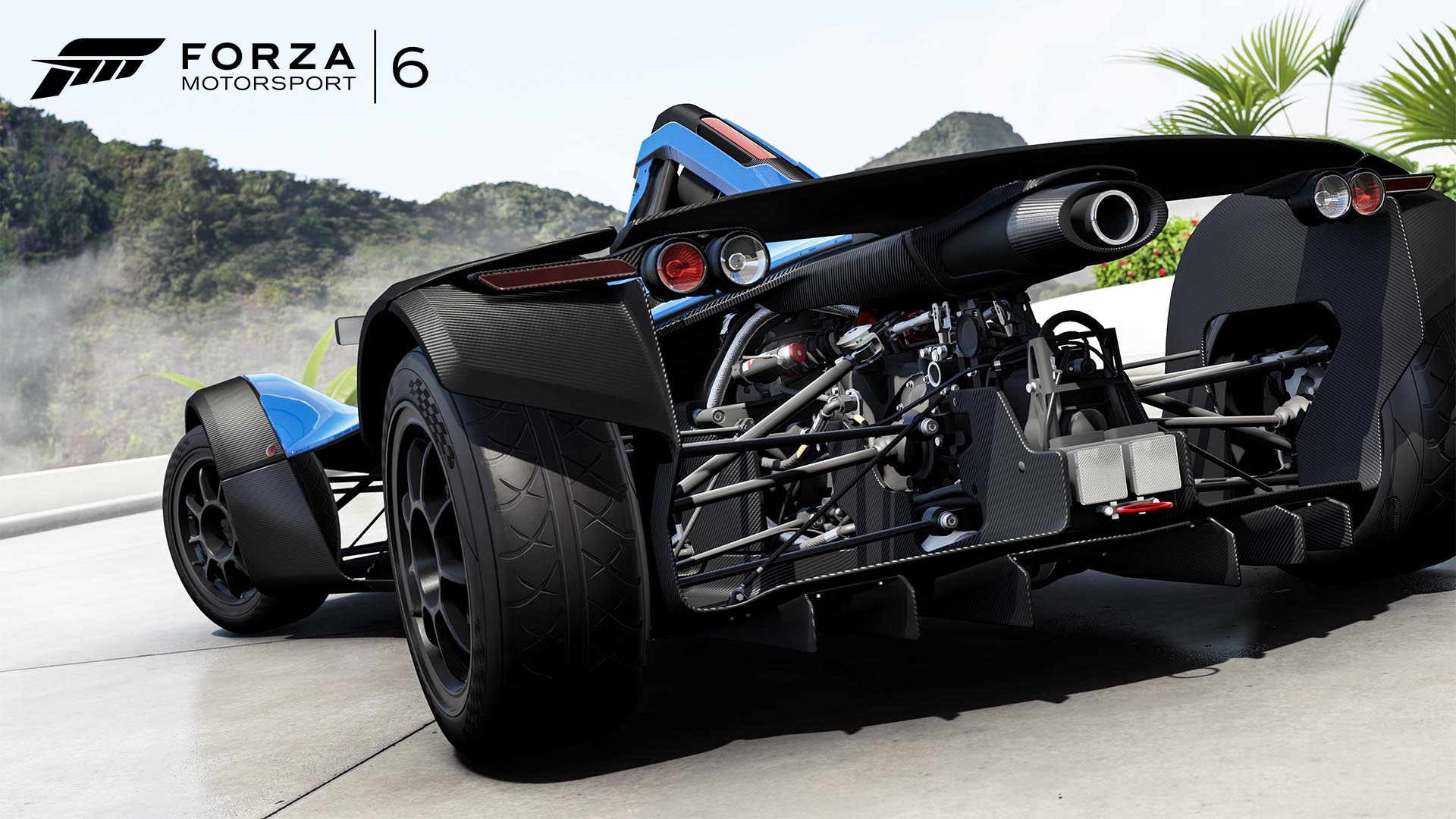 Racing games have traditionally been known to be graphical showcases, and in this case the engine powering the gorgeous (if somewhat sparse) Forza 5 is now driving a staggering number of tracks and vehicles. Forzavista mode is now available on all vehicles, while HomeSpaces make their return, so you can take stunning photos of your beloved chariots in a variety of environments off the tarmac.

It’s not all perfect – you’ll notice the occasional jaggies or shimmering on vehicles just before the race gets underway – but it all melts away once in motion and you’d be hard-pressed to find another game that looks this good running at 60 frames per second on the Xbox One (aside from the previous Forza), and certainly you won’t find a game whose developers bothered to code in the power cables that run behind the jumbotrons around the racetrack (yeah, seriously).

As you might expect, the nighttime and rainy track conditions are beautifully implemented. Switch the camera to the cockpit view and it’s an incredibly visceral experience. You wouldn’t expect to feel almost helpless being cocooned in the safety of your motor vehicle, but that separation from the elements actually enhances their presence.

When you dig into the single-player campaign – Stories of Motorsport – you’re treated to little snippets of motorsport history narrated by such personalities as James May and Richard Hammond (I’m guessing Jeremy Clarkson was vacationing on a tropical island somewhere).

After their mild-mannered, jovial introduction, you’ll find that start of a race is accompanied rather by a cacophony of road noise, tire noise, engine noise and the strangely epic background noise music (which you can turn off in the audio settings menu). While racing enthusiasts will no doubt refer to this auditory assault as a symphony of mechanical engineering in action, there’s nothing I like better than when I’m ahead of the pack, with only the sound of my car ringing in my ears.

And what a sweet sound it is. The engine growls in response to my throttle inputs, while the tires squeal their protest at yet another corner taken too fast. And it’s different for every car that you jump in. (Rumble strips, however, always sound exactly the same.)

If there’s anything that’s missing from the equation, it’s the option to pipe in your own music in the background, but I’m sure the purists will vehemently disagree. 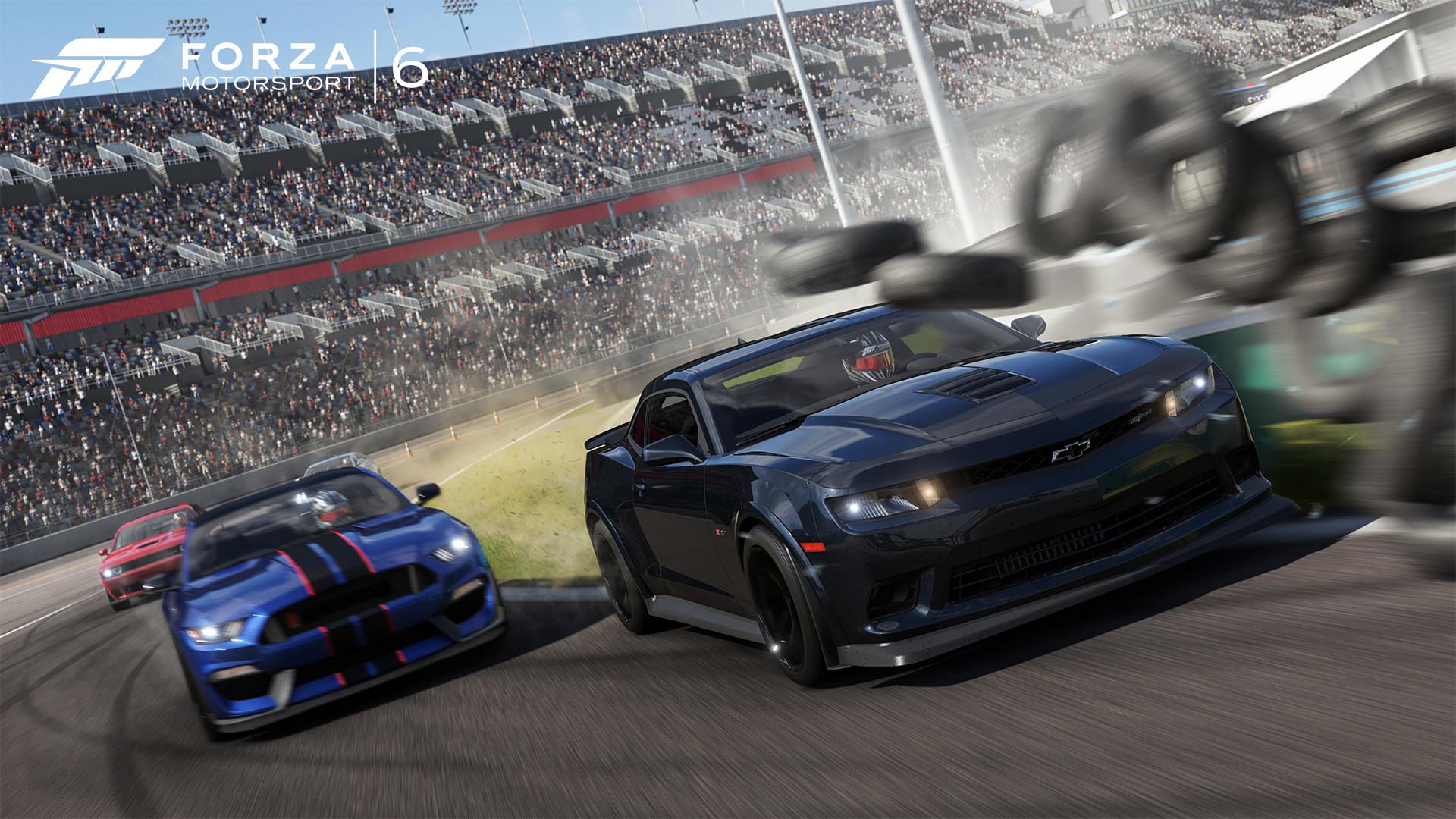 There’s no getting away from the fact that a proper racing wheel will offer better immersion and afford you better steering control. When it comes to racing rigs, the sky’s the limit. And if your gear predates the Xbox One, you’ve got more capital expenditure in your future – your old equipment won’t work!

In the meantime, if you’re grappling with the standard Xbox One controller, fret not, the game compensates for the very limited range of motion afforded by the thumbstick. Happily, your pedal inputs are handled by well-balanced analogue triggers, which are equipped with independent vibration motors so you’ll be able to feel the engine rumble separately from the traction control kicking in. It won’t make up for having an actual wheel in your hands, but you’d be surprised how much you’ll come to rely on the feedback the triggers provide. Of course, nothing in the world will save you from having a lead foot (or lead trigger finger). For those lacking in finesse, there’s the aforementioned assist options to make sure you get across the finish line in one piece.

What of the races themselves? For the most part, you’ll be starting in the middle of the pack, which means you’ll be caught in an unruly crowd at the first turn. At this point, you have the choice of bashing your way out, or trying something with a bit more finesse. However you sort out that initial engagement, you’ll find the next few passes dictated by your difficulty setting. Too easy, and you’ll be sailing far out in front; too hard, and you’ll find yourself being quickly overtaken by other cars who shoot out from behind you as if by magic. The balance of risk and reward becomes increasingly difficult to manage as you move up the ranks. Until, of course, you hit the rain.

The racing line is a constant companion, blue for full throttle and turning an angry red for full brake (not that I ever obey it). Though it seems arbitrarily drawn for certain corners, it’s designed to get you through while keeping the most of your forward momentum. It does occasionally lead you astray – in the rain (notice a pattern?). Yes, follow that blue line and it’ll happily guide you deep into a laser-scanned 3D puddle which really just translates to “frictionless surface” and “traction-control judder”.

Speaking of frictionless surfaces, the interface is set up so that mashing A on the controller will always get you to the next race in short order. The tile-based menu system will be familiar to anyone who’s played a Forza game recently: major categories are displayed with large, colourful graphics; while a vast array of settings are tucked just a right-bumper click away. There’s a tremendous depth to the game that the interface cleverly hides until you’re ready dig your teeth into it: modifications can be handled automatically; car tunings can be downloaded from other players; ditto for liveries. 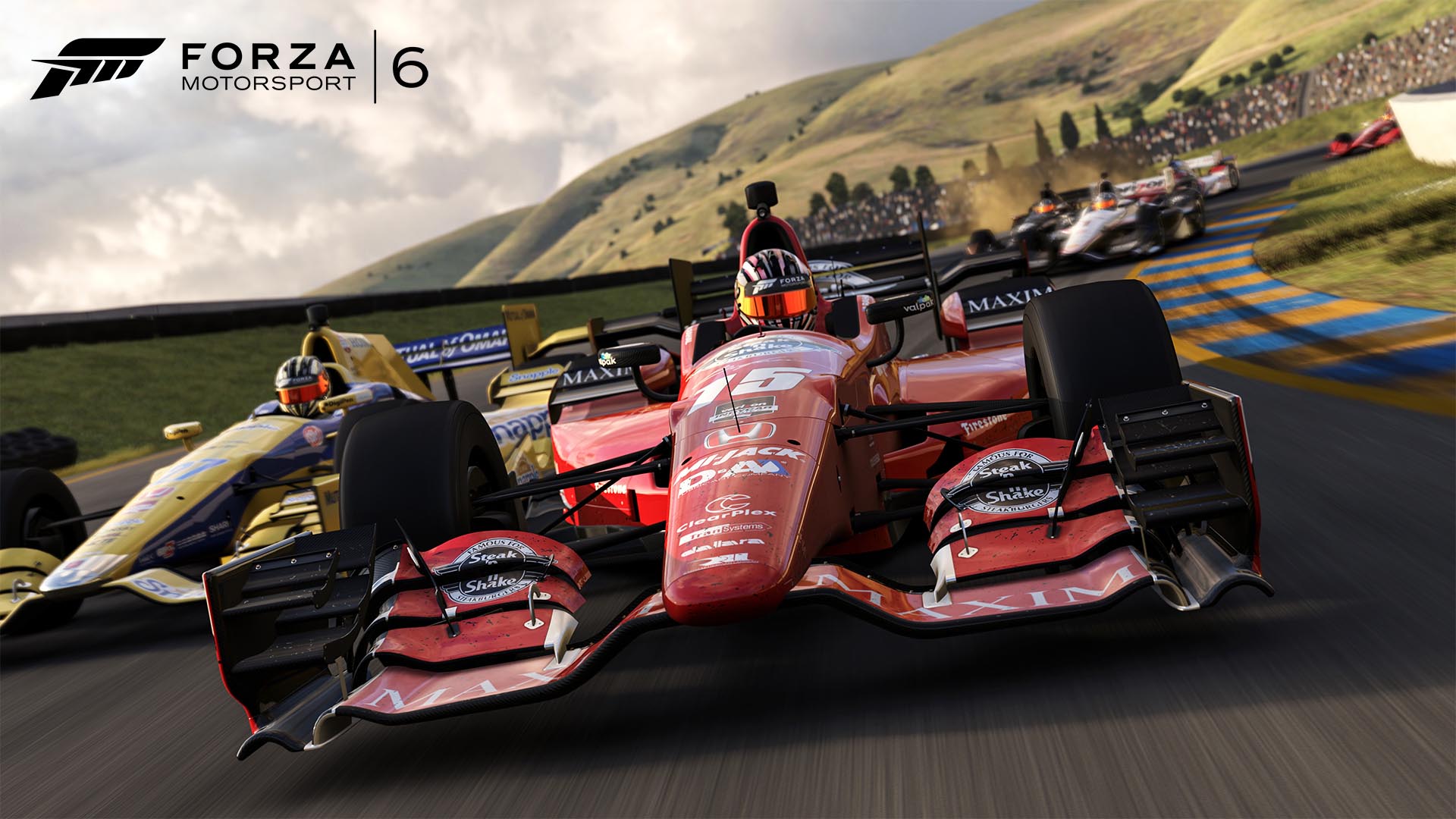 One of the most controversial features when it was first introduced, the Drivatar system has evolved into my favourite component in the recent Forza games. These digital representations of actual meatbag players will make mistakes, play bumper cars and, on occasion, demonstrate genuine skill. While the verisimilitude is debatable, they do keep you on your toes and make every race unique. (By the way, if you prefer clean racing, yes, there’s a setting for that.)

And should you venture into an online race lobby, you’ll find yourself in good company: the matchmaking algorithm uses your Drivatar information to match you with players who drive like you do. It’s a good way to ensure that everyone gets to race the way they prefer without relying on moderators.

Playing with human opponents has its advantages: they talk back (okay, that’s a slightly dubious point), they exhibit truly unexpected behaviour and if you get a bunch of people who’ve never raced Formula E cars together and convince them to turn off all the electronic assists, well, you’ll soon be treated to a pileup of epic proportions. It’s not all carnage, all the time online – you’ll also find drivers who you can learn from, whose line you can follow (and rack up some Perfect Draft points besides).

Unfortunately, the tight online integration also brings with it the most aggravating aspect of the game: constant server communication. When you boot up the game, it checks for updates, new Drivatar matches, and messages. Between races, it’ll also update your Drivatar information and grab a set of new rivals. On a fast internet connection, it’s little more than a hiccup between races; on a slow connection, you might find yourself being lulled to sleep by the taillight of the beautiful Ford GT on the load screen.

We’ve discussed all the gameplay elements, but we haven’t actually talked about the actual game at the core of Forza Motorsport 6. In many respects, Forza is a lot like a regular game: you level up, you earn and spend money and you can apply bonuses and boosts to give you an edge over your opponents.

Of course, levelling up doesn’t actually make the next race easier, so instead the game tracks how many first-place finishes you’ve racked up in the preceding races and gives you a prompt if it looks like you could handle tougher competition. The decoupling of content progression from difficulty ensures that all players can see the campaign through to the end (and there is a long way to go before they get there – developers Turn 10 estimate it’ll take the average player 70 hours to complete the Stories of Motorsport component).

Here again, the Drivatar system influences the proceedings: even when you’re not playing the game, your Drivatar is out and about, participating in races on other players’ consoles, earning credits all the while. Leave the game for a day or two (but why would you?) and you could come back to a small windfall courtesy of your digital counterpart. An insidious tactic on the part of the developers to draw you back into the game, of course, but damn if it isn’t effective. 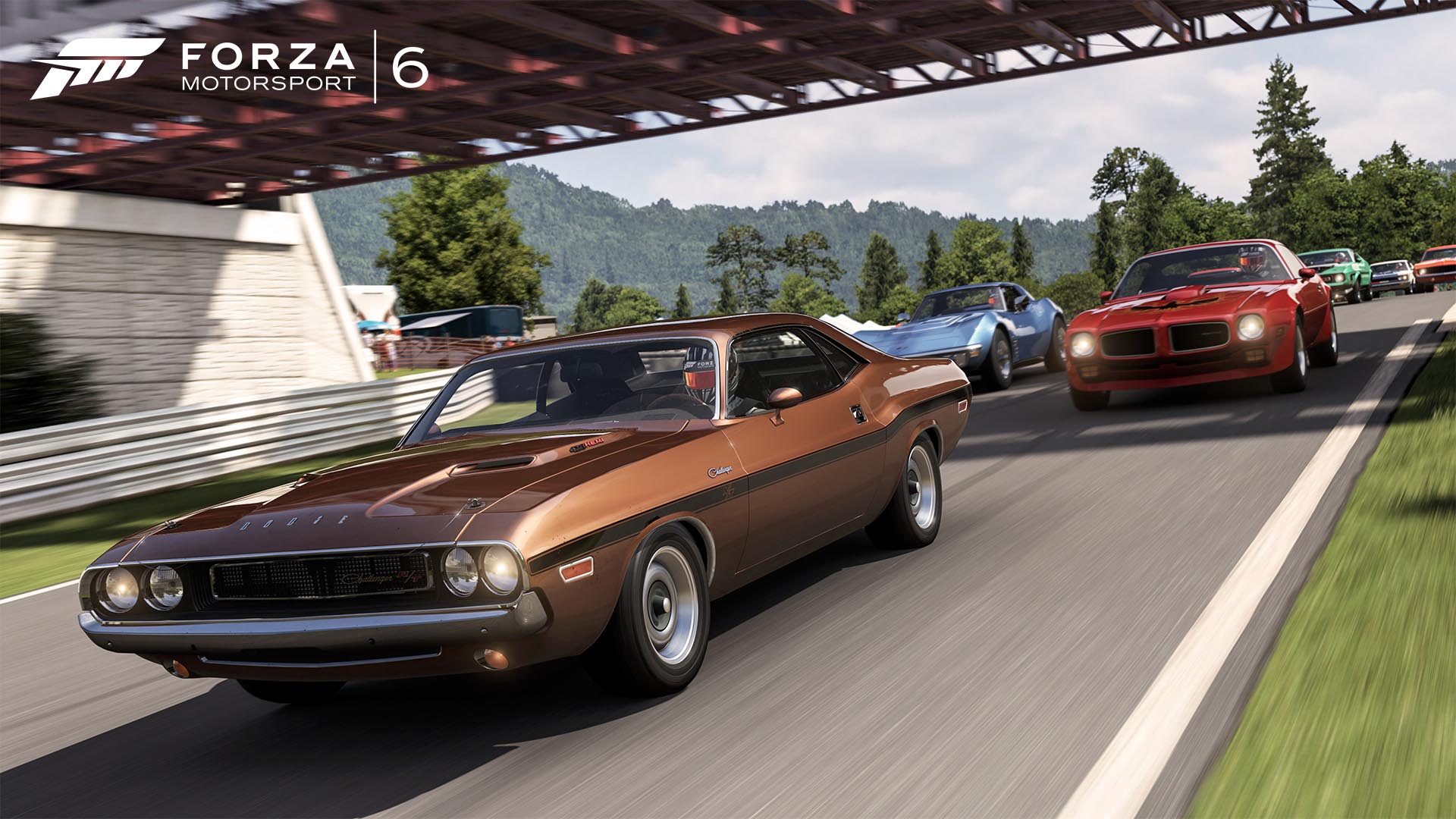 If it wasn't already obvious, we really enjoy Forza Motorsport 6. In fact, I handed this review in waaay after deadline because I just had to run one two three more races. So, don't pick up this game if you want to continue being a productive member of society. It will most likely consume all of your time, destroy any and all sense of personal hygiene and leave you muttering things like "brake before the corner" and "needs more downforce". Even if you've never played a racing game before, all you need to know is that right is the go button, left is the stop button, and you occasionally have to push the thumbstick left or right.

Forza Motorsport 6 for the Xbox One hits store shelves and Xbox Live on September 15, 2015. (Unless you’ve shelled out for the Ultimate Edition, but if you did, you’d already be playing and not reading this review.) If you’re getting the physical version, make sure you’ve got a fast internet connection to download the day-one patch. No patch for smell-o-vision though – the aroma of burning rubber would really complete the immersion.