Getting hosed at the pump What you need to know before your next trip to the gas station.
Advertisement

What you need to know before your next trip to the gas station.

When it comes to gas prices, I think what bothers me the most is the apparent unfairness of it all. For instance, yesterday morning I heard that the price of a barrel of oil was $45.00 US, and like many people, I’m thinking that means gasoline should be way cheaper. But when I got to my local PetroCanada gas station, there was regular fuel still at $1.069. True, it was down from a buck-thirty a couple of years ago, but still…

After filling up and going through the gas station’s car wash, I emerged to see the price of gas had changed from $1.06.9 to $0.99.9. You’ve got to be kidding! In the space of five minutes I could have saved seven percent on my purchase. How does that work? It’s the same gasoline!

Before I left, I had a chat with the gas station attendant.

“It’s not my fault!” she exclaimed, her hands raised almost instinctively like she was surrendering. “We’re on the Viper system!”

I said I knew it wasn’t her fault personally, but the Viper system? That sounds ominous. Tell me more.

“We follow the Esso and the Shell down the road. If they lower their prices, we do too.”

“Do you ever lower prices on your own?” I asked.

“What do the Esso and Shell stations do?”

Reminds me of an old Goon Show line: “Follow me, I’m right behind you.” No wonder people think something’s going on.

Meanwhile other customers had entered the store and were chiming in, but they all had this kind of sad resignation about them. “It’s crazy,” one said, “But what can you do?”

Well, according to Dan McTeague, Senior Petroleum Analyst for gasbuddy.com, founder of tomorrowsgaspricestoday.com, former MP for Scarborough-Pickering in Ontario and long-time consumer advocate, it’s important to understand that the price of a barrel of oil has less to do with the price of gasoline at the pump than you may think.

“We hear a lot about oil,” he says, “but not a lot about gasoline. In fact, we have an oversupply of oil in Canada, where output has doubled in the past 10 years. A big part of the problem is that in 1970 we had 44 oil refineries in Canada, in 1993 it was down to 29 and now we have only 14 refineries. It’s the wholesale gasoline price you need to look at!” 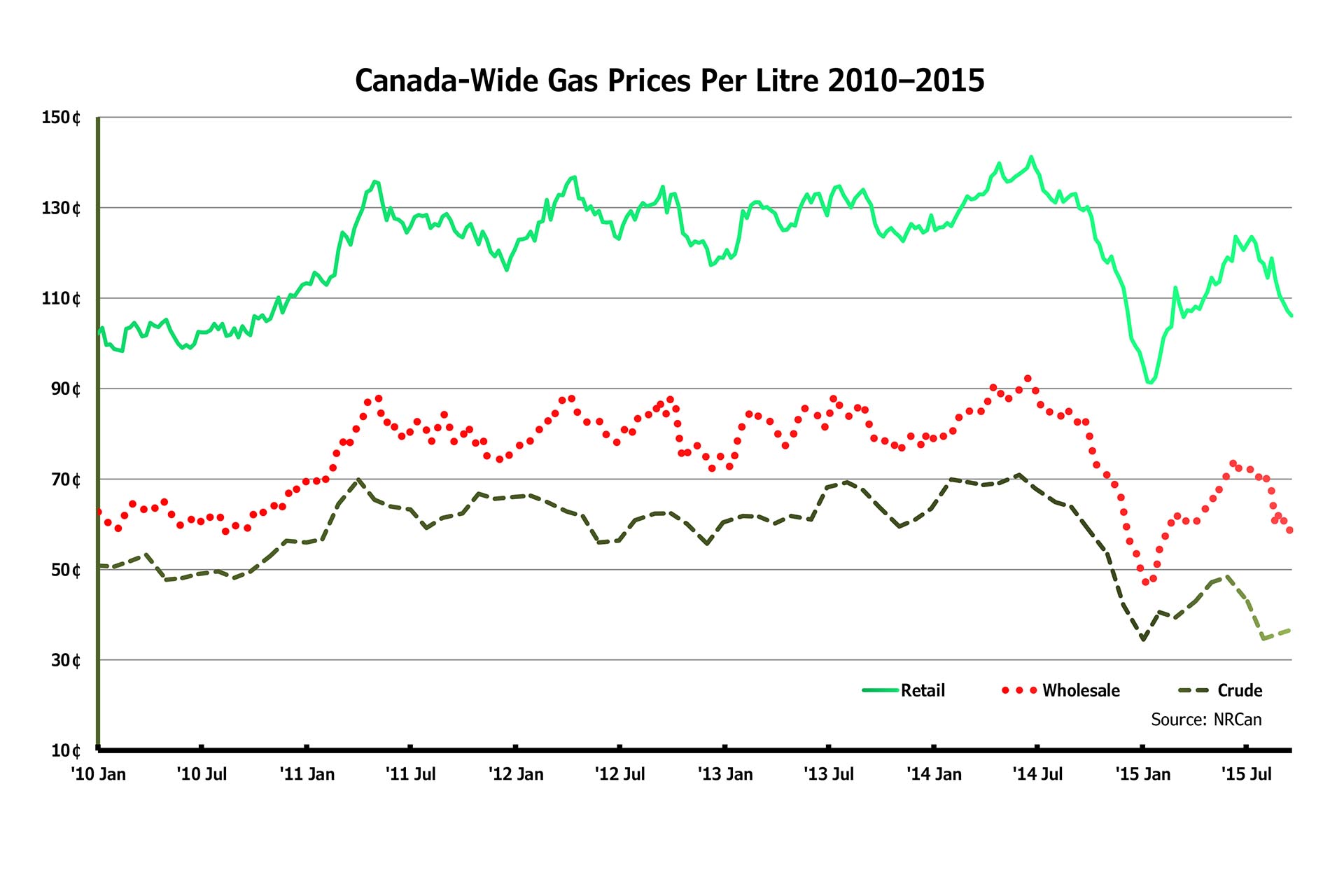 Canadian Gas Prices from 2010 to present, with data from Natural Resources Canada

That wholesale price was, at the time of this writing (it changes daily), is $0.615 cents (Canadian) per litre. While there are arguments for and against building more refineries (they produce a lot of jobs, cost eight-to-ten billion dollars to build, and likely would be exporters anyway), and while according to the Organization of Economic Cooperation and Development’s (OECD’s) International Energy Agency, Canada refines more gasoline than it consumes (we have an over-supply), the price of gasoline still seems strangely reluctant to go down and stay down.

In Canada, the difference between wholesale and retail is largely a factor of provincial and federal taxes, leaving about a nine-cent margin at the retail level, according to McTeague. He points out that a margin of less than six cents represents below-cost selling (i.e. selling at a loss vis-à-vis the wholesale price) and also suggests that doing so would drive small independent retailers out of business. Interestingly, he notes, you’ll see that such businesses have indeed just about disappeared over the past decade and we now have a situation where the major oil companies control the extraction of oil, the refining of oil and the retailing of gasoline and diesel fuel at the pump. True “vertical industries,” as they’re called. Not much room for completion at the gas station.

Turns out that the wholesale price of gasoline is determined on a daily basis by trading on stock markets like the New York Mercantile Index (NYMEX) that sets the wholesale price for gasoline in Canada as well as the US. However, in the US there are more players in the industry and more competition to drive the prices down. Here we have less.

Additionally, according to McTeague, the wholesale price in Canada is increased by seven cents per litre when sold to retailers and, of course, gasoline is subject to additional taxes (although this varies by province). Retailers then jockey for position at the pump (or appear to…), but it’s always by pennies or tenths of a cent per litre, and rarely long-lasting. You’ve probably noticed…

What many consumers would like to see is a return to the low pricing we enjoyed more than a decade ago (it’s perhaps useful to remember that gasoline first hit $1.00 per litre in 2005, which is the same year deregulation of the oil industry began under Brian Mulroney’s Conservative government. One supposes the fact that we’re paying pretty much the same now is a positive development, or one could say that consumers have become accustomed to paying more for a commodity that is now in plentiful supply. A neat trick!

“We pay a premium for our willingness to allow more concentration in the oil industry,” says McTeague, and looking around my town, I certainly see fewer independent retailers than a decade ago. And it would seem to me that if we had more refineries, especially independent refineries, perhaps we could become what in the industry is called a “price maker” (we can set our own pricing) rather than a “price taker” (we follow others).

That said, the current difference between Canadian and US prices at the pump is not as huge as you may think. The average price for regular grade gasoline in the US (again, at the time of this writing), is $0.825 per litre (Canadian dollars), while in Canada it’s $1.057. So, about 20-percent lower south of the border. But don’t forget, their market is ten times the size of ours, and there isn’t as much tax in the US price. Add more aggressive competition and you can better understand why US gas is cheaper than ours.

But there’s one more thing. Our dollar has fallen by about 25 percent over the past year and even though wholesale oil and gas prices have also fallen, in North America (yes, including us) those commodities are traded in US dollars. That means we have to spend more dollars for a product that in US and global terms is worth less.

My advice? Try to purchase a vehicle that requires regular grade gasoline and factor in fuel efficiency (Canada’s new five-cycle system is much more accurate than the previous system) when shopping for a car or SUV. And use the Gasbuddy app to scan for the best prices in your area before filling up. You can also check Dan McTeague’s tomorrowsgaspricestoday.com website to give you an accurate forecast for gas price increases and decreases. At least you’ll be armed with some useful intelligence before making your next gas purchase. It could save you a few hundred dollars a year.

And yes, I should have taken my own advice and checked the app. I could have saved seven percent!