Review by Costa Mouzouris. Photos courtesy of Harley-Davidson and by Brian J Nelson and Tom Riles

Big changes don’t come frequently at Harley-Davidson. About every dozen or so years a new engine is introduced, and it might be about that long before a new platform gets into the lineup.

Harley’s biggest push recently came with the introduction of the Project Rushmore bikes two years ago. This included some important changes to the firm’s touring bikes, like adding optional linked ABS, improved turbulence-reducing fairings, new headlights with LED and halogen bulbs, an infotainment system with Bluetooth connectivity and optional integrated GPS, and easy-open saddlebag lids (which are the easiest-operating lids I’ve seen to date). 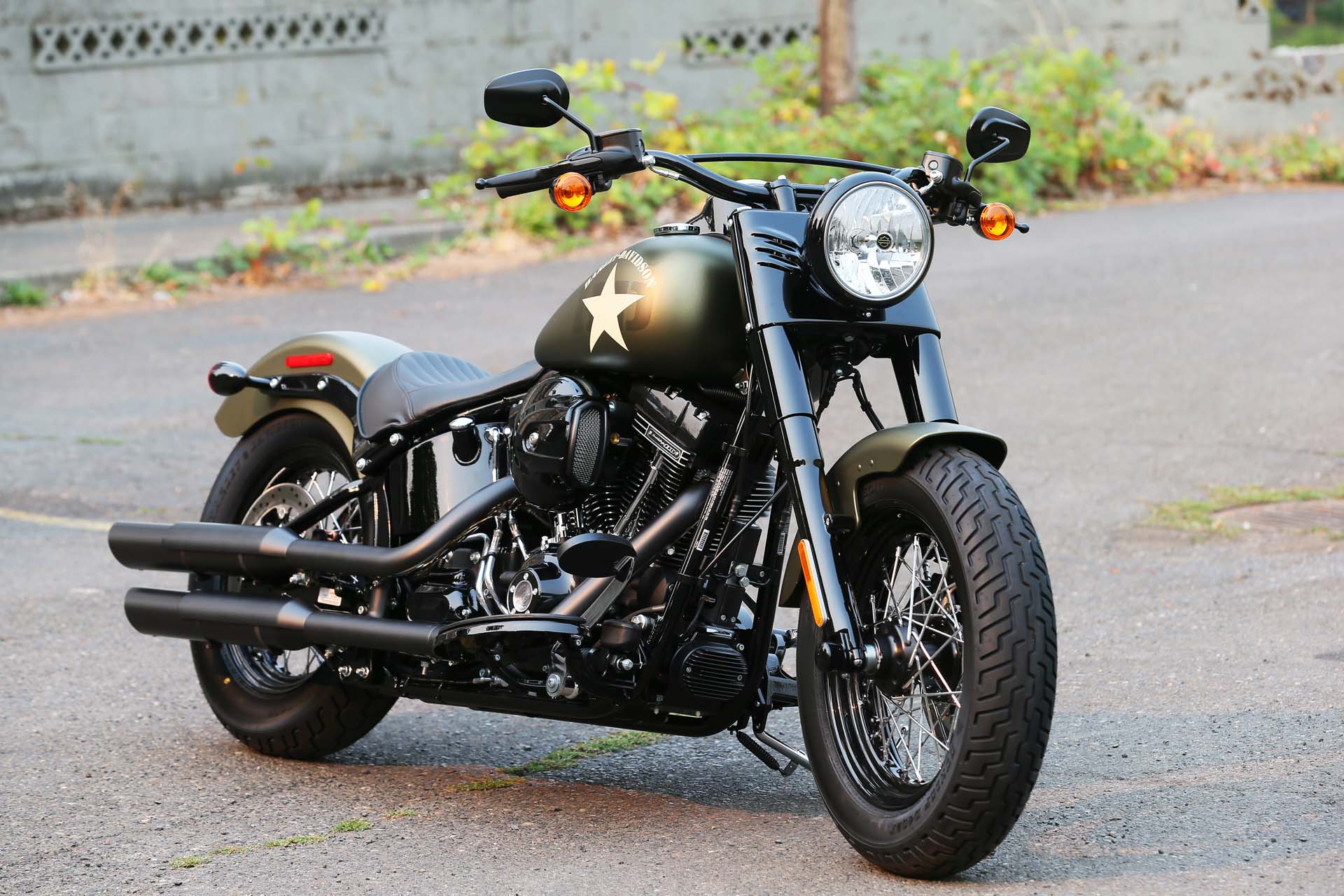 Compared to its non-S equivalent the Softail Slim S is completely blacked out; the only chrome you’ll find is on the pushrod tubes and brake pedal.

Perhaps more importantly, Project Rushmore also made the high-output Twin Cam 103 engine standard on all of Harley’s touring bikes, as well as a few select Big Twin models. The Milwaukee motorcycle maker also introduced the Twin Cooled 103 engine in some of its touring bikes, which added liquid cooling, thus improving output – or at least there was no power loss – as the engine heated up. This also improved emissions, a task that is becoming increasingly more difficult on a push-rod twin with pistons the size of whisky barrels.

It’s no surprise then that Harley’s product planners have let off the throttle a bit, though there are still a few important changes for 2016. Among them is the new Softail Slim S (as well as its brother, the Fat Boy S). What distinguishes the Slim S from its respective non-S counterpart is different paint, an absence of chrome, and it is powered by the Screamin’ Eagle Twin Cam 110B engine. At 1,801 cc (110 cu in) it’s the biggest – and most powerful – air-cooled engine the Motor Company makes.

Other Softail models and all Dyna models except the Street Bob get the high-output Twin Cam 103 engine. Since all Softails get ride-by-wire throttle control this year, they’re also available with cruise control; it will be standard on the Slim S. 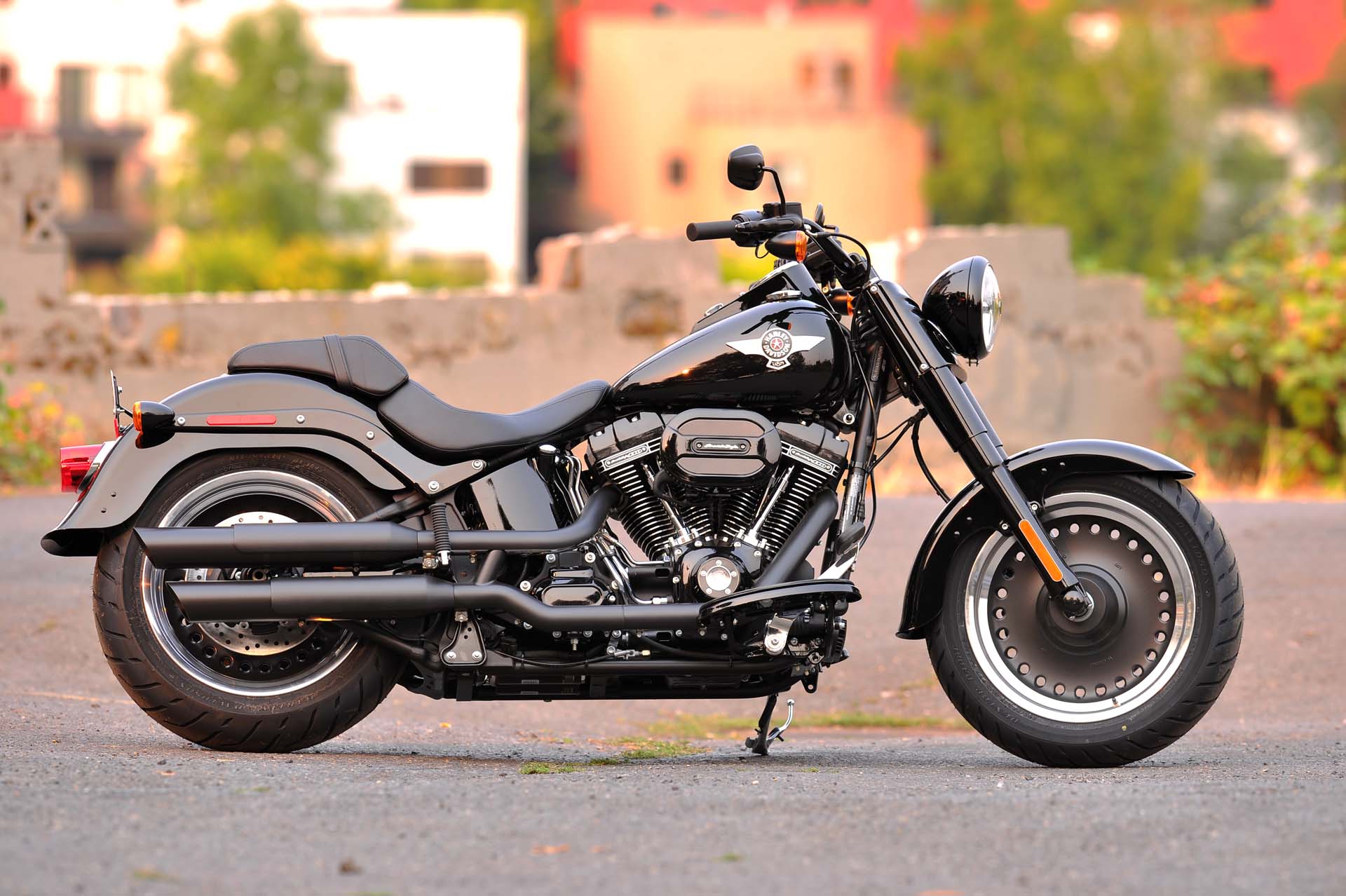 Previously, the only way to get your legs over that massive V-twin was to either dish out premium dollars for one of Harley’s low-production CVO models (just over $35,000 for the 2015 CVO Softail Deluxe), or to spend $6,700 on a crate engine, and then have it installed. The 110-incher is now available in the standard-production Softail Slim S, which starts at $21,500, only $4,000 more than the Slim.

The real kick-in-the-pants comes when you twist the throttle. The Slim S is relatively light in comparison to any of the CVO bikes that came with this engine, weighing in at 323 kg wet compared to the chrome-laden 2015 CVO Softail Deluxe at 355 kg, for example. This gives it a brutish forward rush when twisting the right grip, regardless of what gear you’re in or what at speed you’re travelling.

Because the engine is counter-balanced, though, it is vibration free even when lugging it in sixth gear at speeds as low as 70 km/h. The spread of torque is so broad you can almost forget the shifter on winding back-roads and just leave the bike in fourth gear until you hit the highway. That highway stint should be kept short though, because the stylishly ribbed solo saddle is punishingly firm, good for maybe one hour of pain-free support. Despite its low 660 mm seat height, the ride is plush and comfy, though big bumps will bottom the short-travel suspension, and footboards will touch ground in a spray of sparks at a modestly spirited pace. 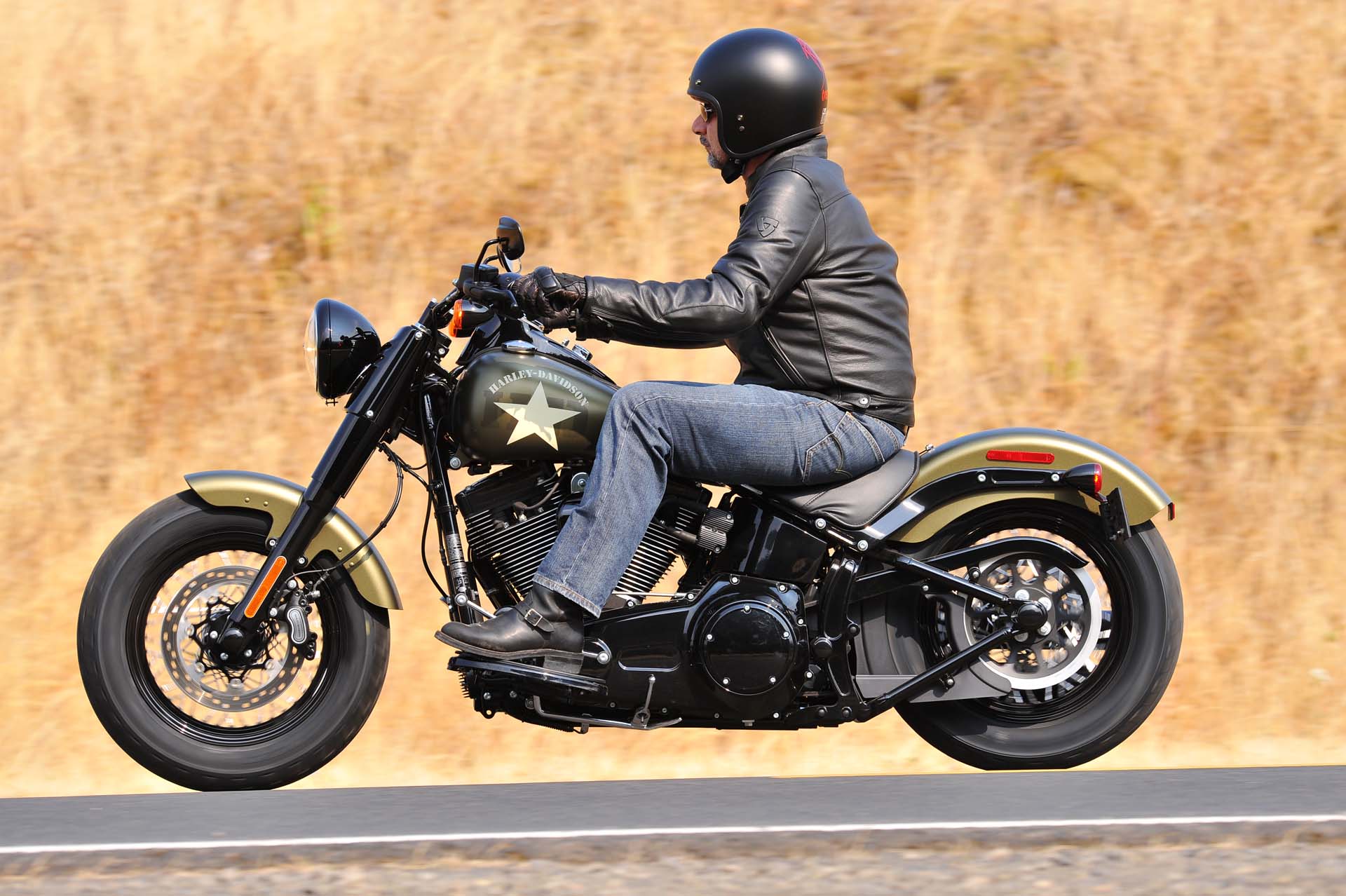 But the Slim S isn’t about scorching back roads (which it just might do if you ride hard enough to scrape footboards on the drought-laden west coast), it’s about the short cruise to the café or bar, where you can park it and sit on a terrace watching others watch your bike. In contrast to Harley’s CVOs, which are all shimmering in reflective surfaces and garish metal-flake paint, the Slim S is understated and sinister. Even though the military-themed olive gold pearl denim paint (well, that’s what they’re calling it) of my tester doesn’t sparkle in the sun, it nonetheless beckons numerous approving glances of bystanders.

Although Harley didn’t make revolutionary changes this year, the new Softail Slim S will likely broaden the company’s reach to young adults (18 to 34), the age group to which Harley has sold more bikes in North America than any other manufacturer in the last seven years.

It’s a trend I don’t suspect will let up anytime soon.