Alliston, Ontario – Any time a new Honda Civic is introduced, it’s a pretty big deal - especially in Canada. The Civic (sedan and coupe) has been this country’s best-selling car for the past 17 years and is on track to make it 18 years in 2015. Worldwide, the Civic is Honda’s highest volume automobile and is now built in eight countries.

In Canada, Civic sedans and coupes are built in Alliston, Ontario, about 100 km north of Toronto. The Alliston plant opened way back in 1986 – Honda was the first Japanese automaker to manufacture cars in Canada – and has produced more than seven million cars and trucks over the years, including the Civic, Accord, Odyssey, Pilot, Ridgeline, Acura EL, CSX, MDX and ZDX.

More than 4.5 million Civics have been built there since 1988, and currently, Alliston Plant #1 builds Civics and Plant #2 builds CR-Vs. Plant #3 builds four-cylinder engines. Both car plants have a combined annual production capacity of about 400,000 vehicles, and employ 4,200 workers, or as Honda calls them, ‘Associates’. 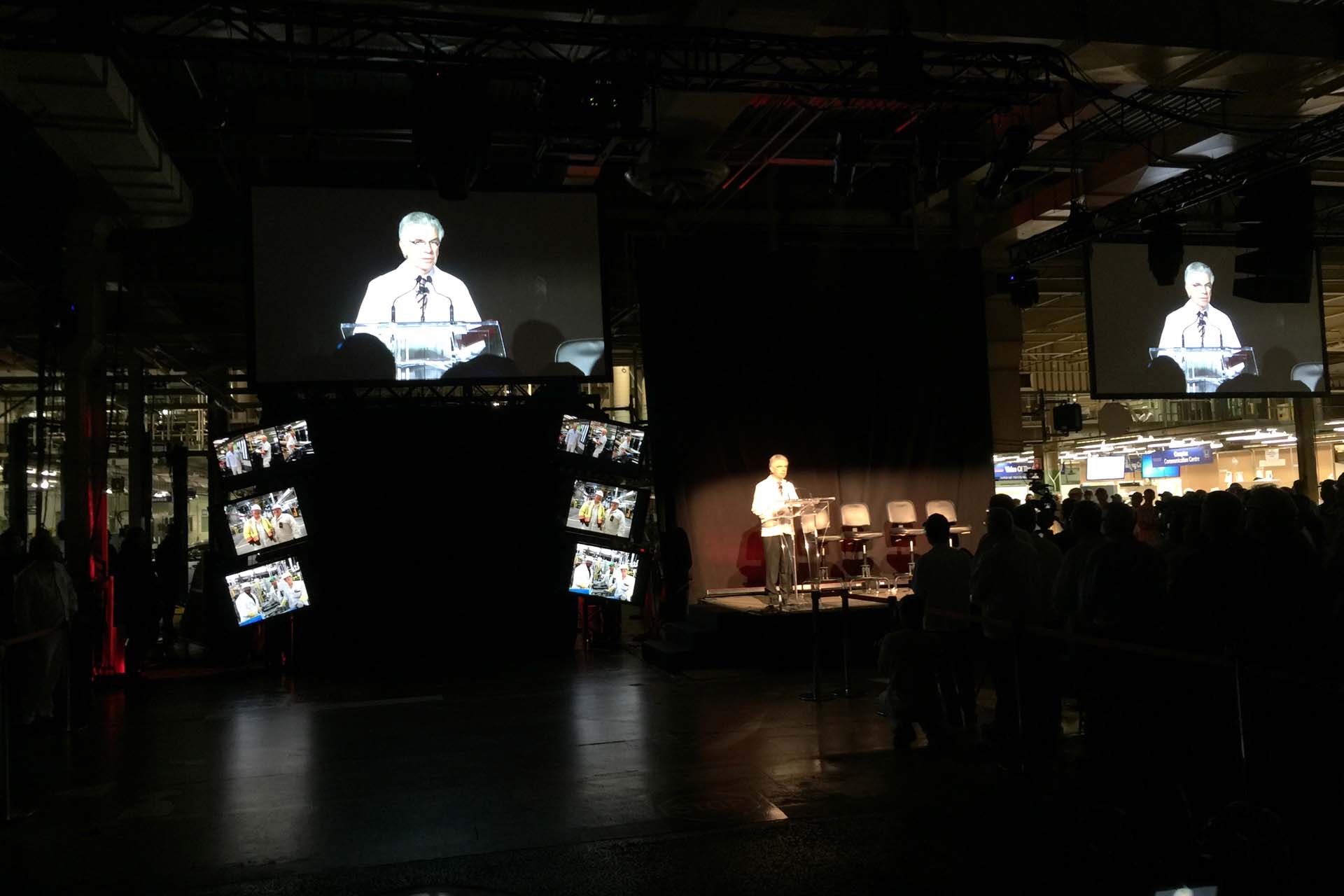 Last week, Honda invited its employees, managers, government officials, media, and VIPs to see the first all-new 2016 Civic Sedan come off the assembly line. Actually, it wasn’t the first 2016 Civic built at the plant, but it was the official start of mass production.

Adding weight to the importance of the event was an announcement that from now on, all Civic sedan and coupes (including the Si Coupe) sold in Canada will be built in Canada. Previously, some had come from other Honda plants in Japan and the U.S.

Another boost for Canadian pride was the announcement that the Alliston plant is the first Honda plant outside of Japan to be given full responsibility for the development and production of a Honda vehicle. That includes developing the processes and tooling that form the manufacturing process at all worldwide Honda plants that build the Civic.

Prior to the unveiling, journalists were invited to tour the plant, which underwent major technological upgrades in order to switch over to the newly redesigned 2016 Civic sedan and coupe. Additional machinery and technology was installed ahead of time while the assembly line was still producing the 2015 Civic. The entire assembly line only had to be shut down for one day before cranking out new 2016 Civics. 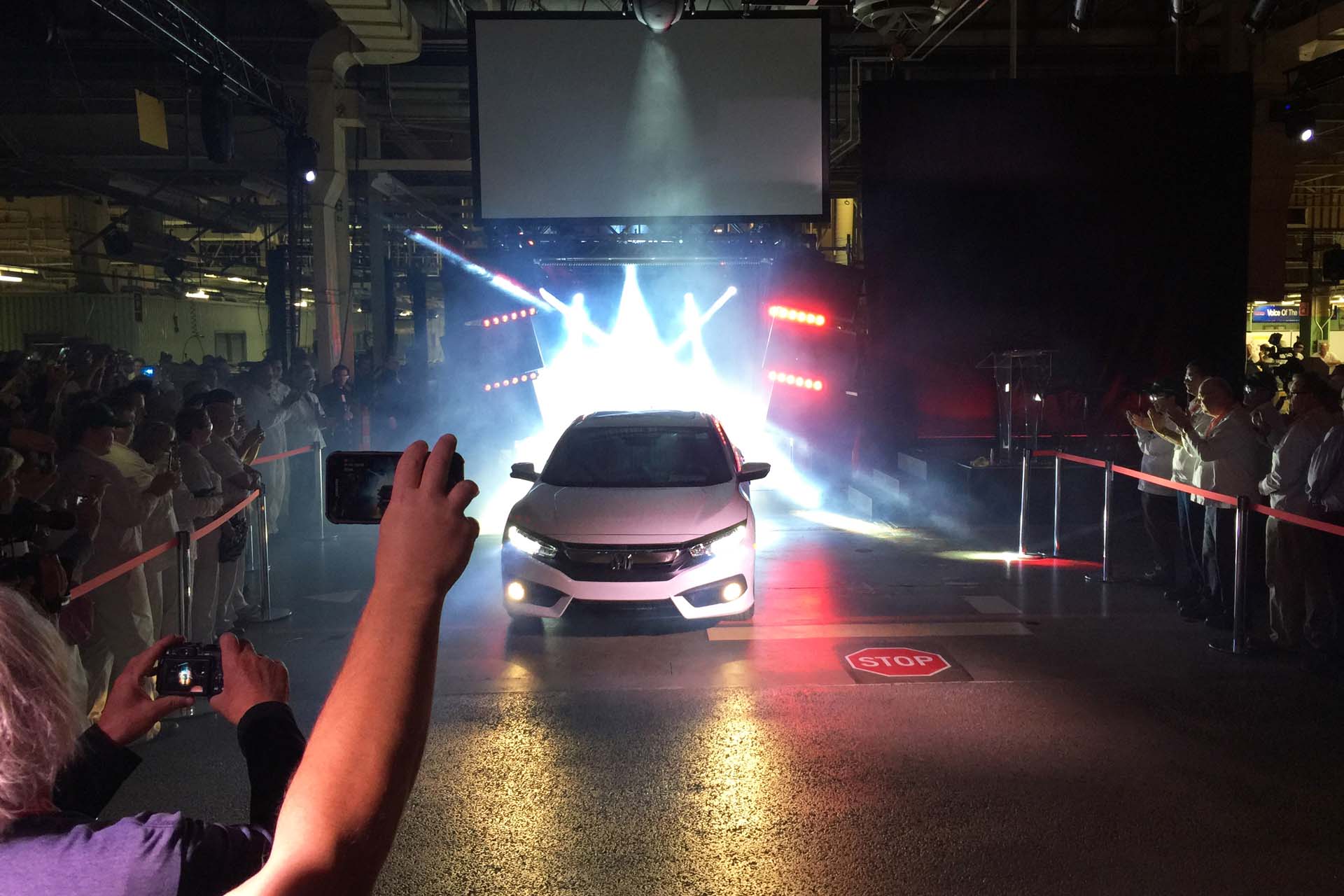 Journalists were not allowed to take cameras into the assembly line area and we all had to walk in a defined pedestrian area while Honda ‘Associates’ in white coats kept a careful eye on us to prevent us from going ‘out of bounds’. Apparently, corporate espionage is alive and well.

Huge presses stamp the body panels and robots using laser guidance systems weld them in place without a human being involved. New for 2016, a separate front module is bolted into place later in the process, making it easier for workers to work on the front of the car before it is installed.

Each car has a ‘build sheet’ that specifies what features, options and paint colour are required so that it comes off the assembly line with all the right parts. In a sense, each car is custom built. A good example of the plant’s ‘just-in-time’ parts delivery is that, at any given time, there is only one hour’s worth of parts available in the plant. 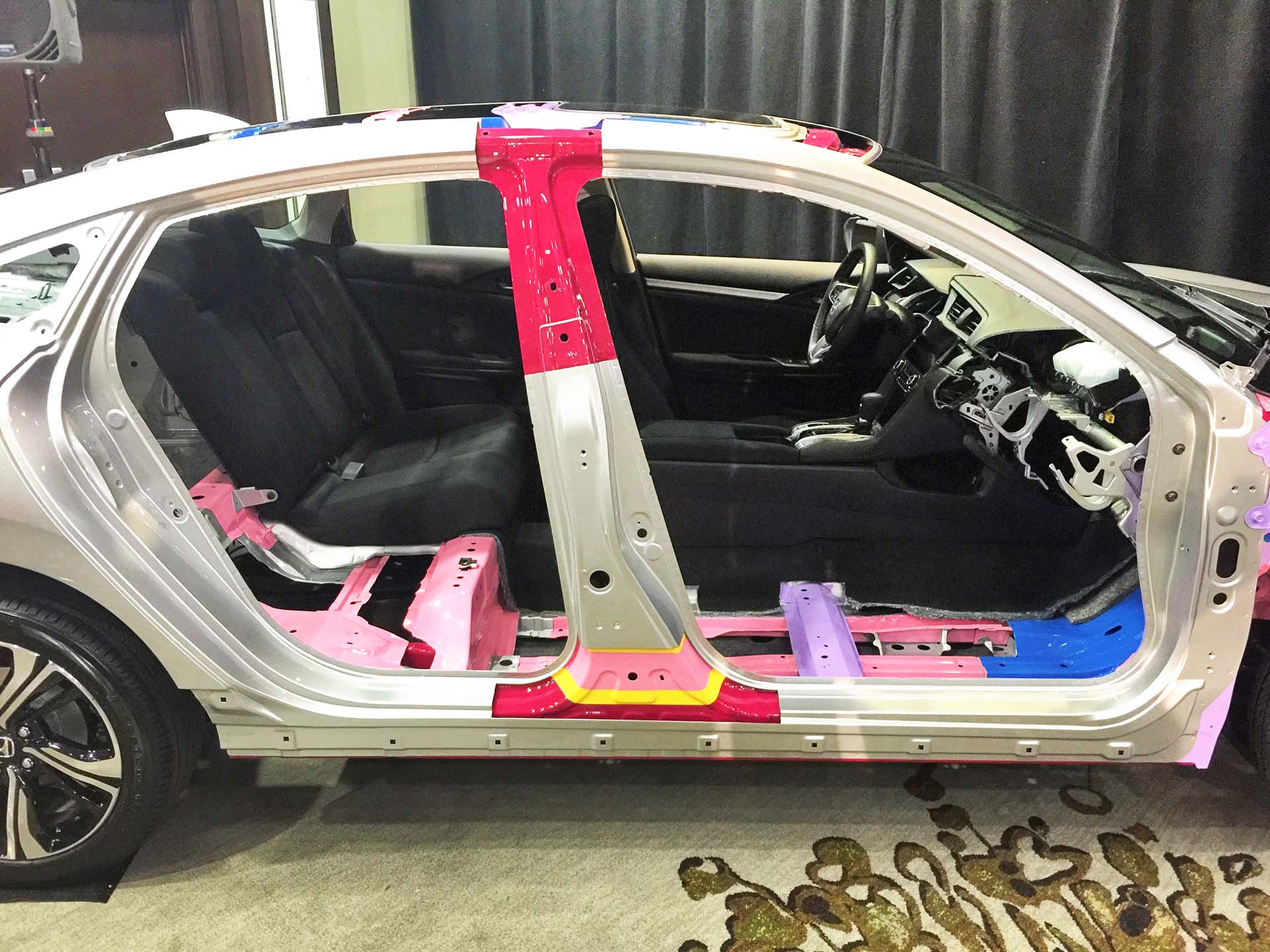 Interestingly, managers’ workstations are located right next to the assembly line so that any adjustments or problems can be addressed immediately. There seemed to be no obvious distinction between workers and managers on the plant floor.

Alliston Plant #1 builds 820 Civics per day, or one every 63 seconds. Approximately three-quarters of the Civics built in Alliston are transported to the United States while the remainder are sold in Canada. 90% are transported by rail and 10% by truck, mostly to local dealers.

Assembly line workers work Monday to Friday in two shifts per day: 6:30 am to 3 pm and 4:30 pm to 1 am with some overtime on Saturdays. To keep employees from getting bored or dissatisfied, they switch tasks every two hours within their production zone, eg. interior, body, mechanical, etc. Employees can also apply to switch zones if they want to try something different.

All cars are given a final inspection at the end of the assembly line and there’s even a live feedback monitor on the line that displays current issues identified by employees and dealers.

Every finished car is taken for a test drive on a 1.7-km test track that’s located on-site.

At a time when some Canadian auto manufacturing plants are closing or under review and manufacturing jobs are going to Mexico or the U.S., it’s nice to see a Canadian auto plant with a bright future. By designating the Alliston plant as the lead global plant for the Civic, Honda Motor Company is placing its bets on Canadian production quality and expertise for the long term. That means good salaries for thousands of Canadian Honda employees and supplier’s employees, not to mention millions of dollars in taxes for government coffers.

See more
An automotive writer for over 30 years and co-founder of one of Canada’s first automotive websites, Greg Wilson has moved into the editorial slow lane and now contributes occasional vehicle reviews and features to autoTRADER.ca’s editorial section. Greg is a member of the Automobile Journalist’s Association of Canada.