Pop quiz: What does celebrity chef Gordon Ramsay love, even more than he loves food and screaming at people until they cry? Any idea? No?...
Advertisement

Pop quiz: What does celebrity chef Gordon Ramsay love, even more than he loves food and screaming at people until they cry? Any idea? No?...

Pop quiz: What does celebrity chef Gordon Ramsay love, even more than he loves food and screaming at people until they cry? Any idea? No? Time's up! The answer is Ferraris. Dude just loves Ferraris. Every time he completes another swear-filled rage the Hell's Kitchen star cools off by popping down to the dealership and buying another Ferrari like the rest of us buy Doritos.

Over his career he has owned almost 20 different models. The bond is so strong that Ferrari even uploaded a publicity clip of him test driving one of their cars. Our meal today will consist of a few of Ramsay's own models, along with a couple of other spicy makes thrown in just for flavour. Then, for dessert, we'll offer a few other celebrity chefs and their own automobile tastes. 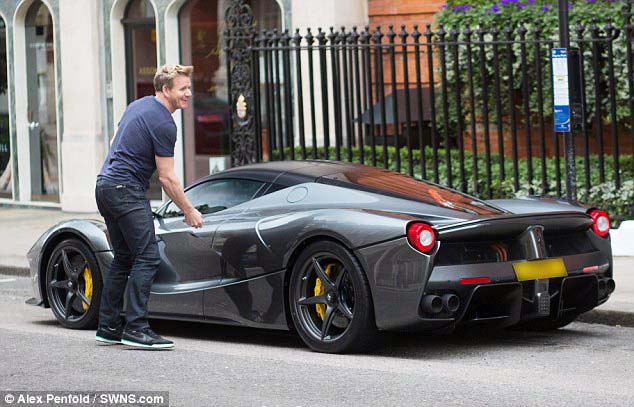 Earlier in 2015 Ramsay spent about $2million at a London dealership to get one of the very few of these limited-edition hybrid models. It tops out at more than 200 km/h, yet decreases fuel consumption by nearly 40 per cent. 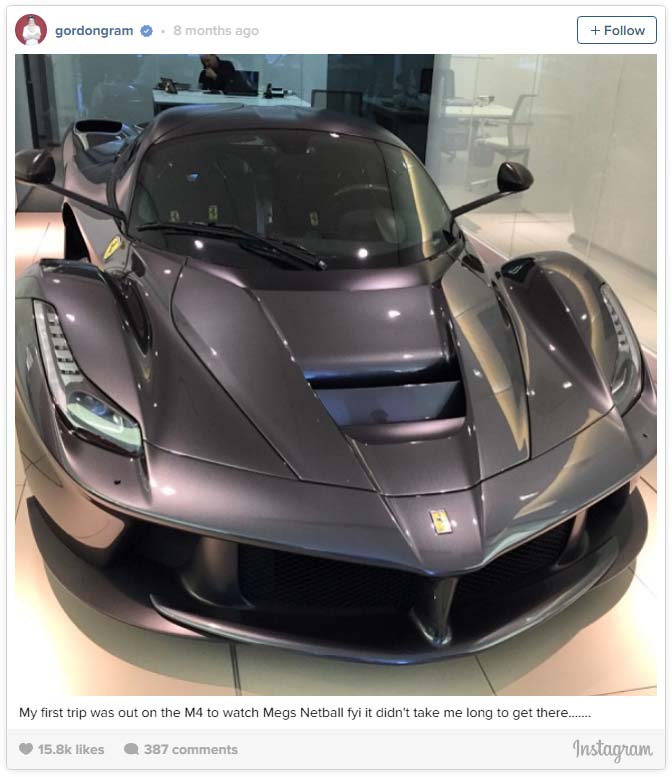 Having picked up the car, Ramsay's first trip was to watch his teenage daughter's netball game, a journey he wrote about on Instagram. You have to wonder if, like most teenagers, "Megs" feels mortified when her old man tries to act cool in front of her classmates, or if he gets a pass as long as he's in a car like this. 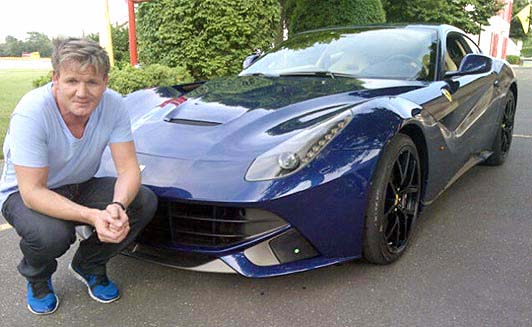 Ramsay called the purchase of a Ferrari the realization of a lifelong dream, second only to running a restaurant with a perfect Michelin star rating (which he also accomplished). Here, he poses with an F12 Berlinetta, which cost a modest $400,000. 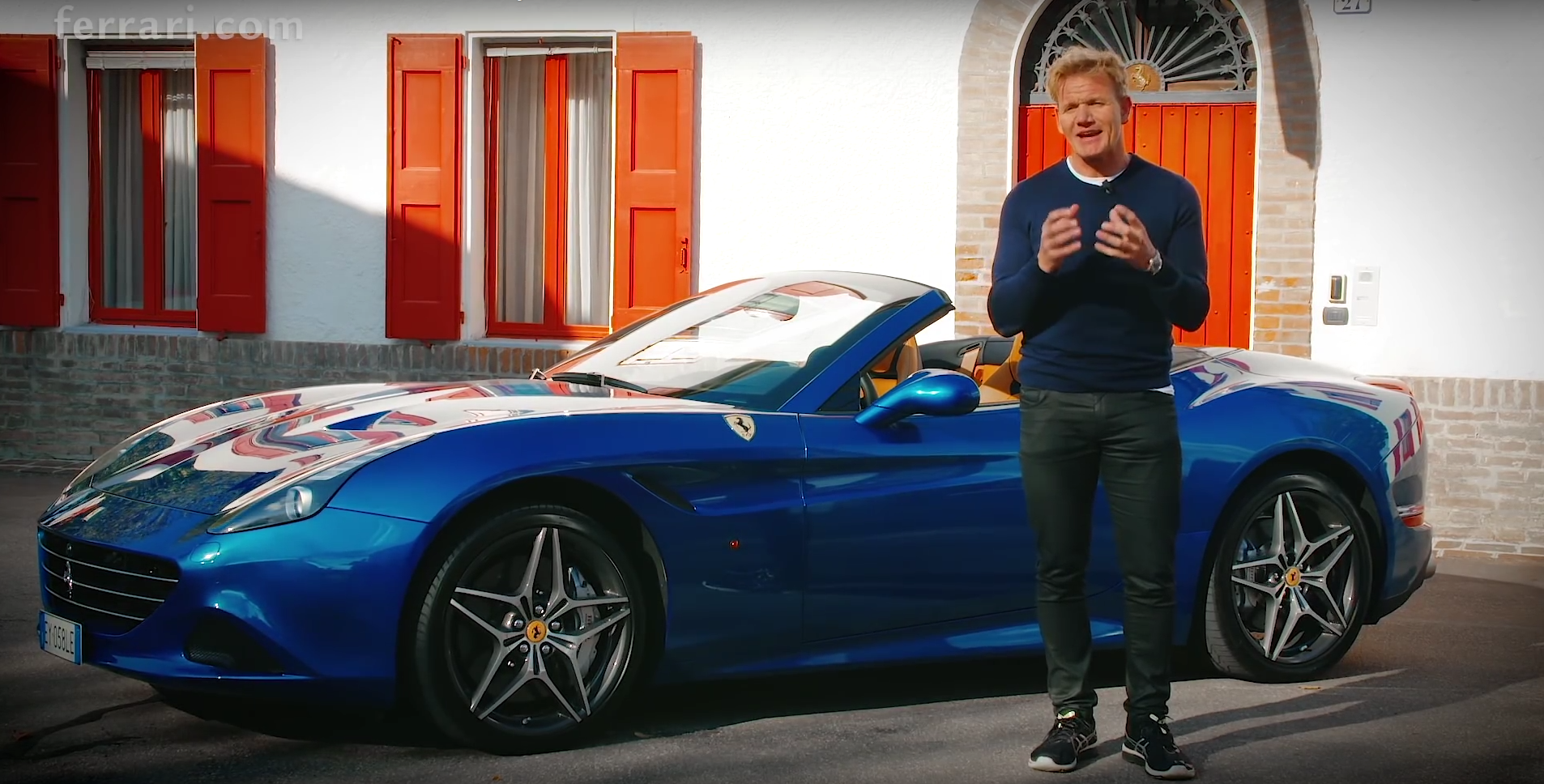 Ramsay's latest dip into the Ferrari pool is their new California T, for which Ramsay paid a visit to the brand's Maranello headquarters to shoot this little promotional video espousing his love for the prancing horse brand. 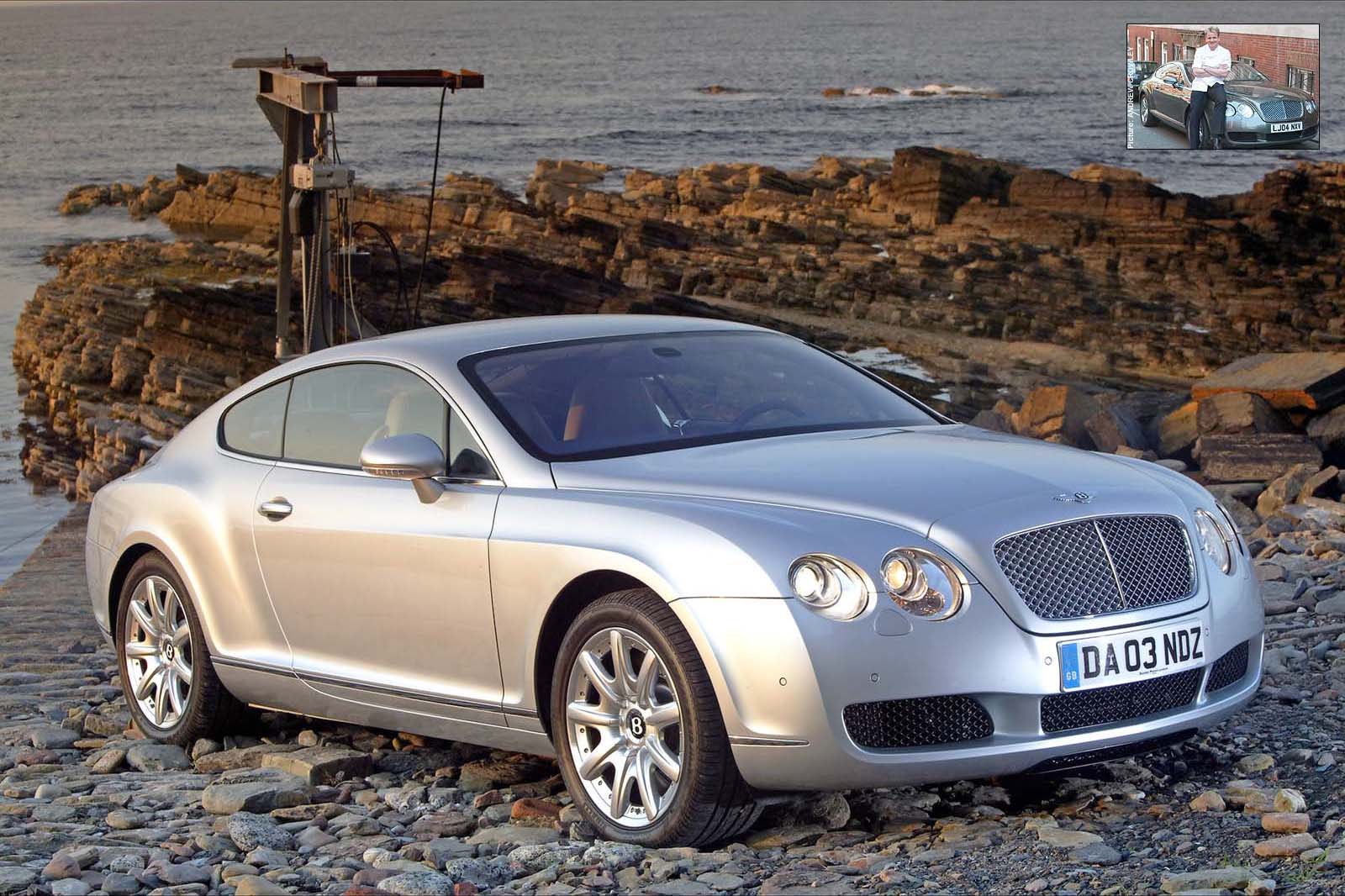 More than 10 years ago, Ramsay was cited for speeding in a Porsche 911 Turbo. One of his reactions was to lament that driving a Porsche for a few minutes was "like doing 12 rounds with Lennox Lewis." (You have to wonder if he regrets that quote now?) In any case, he sought refuge in a vehicle that didn't punch with two fists, namely this Bentley Continental GT. 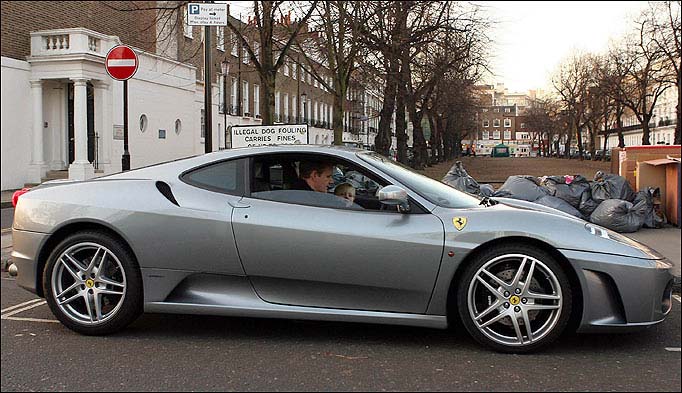 In the bad old days of 2008–09, with the credit crunch gripping the entire world by the throat, not even Gordon Ramsay could escape its clutches. His restaurants lost money and – worse! – their high rankings in lists of hot spots. Desperate to free up some cash, Ramsay had no choice but to sell his beloved Ferrari Scuderia – at a £50,000 loss! 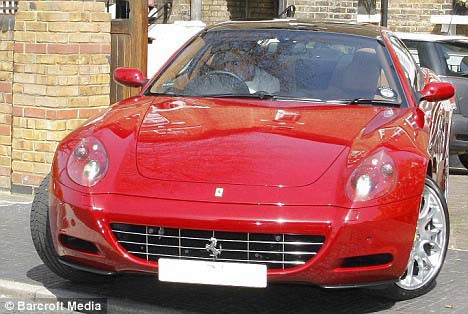 But like Romeo and Juliet, nothing could keep these two lovers apart. After only a few Ferrari-less weeks Ramsay got the shakes and had to run out and purchase a lower-priced model. 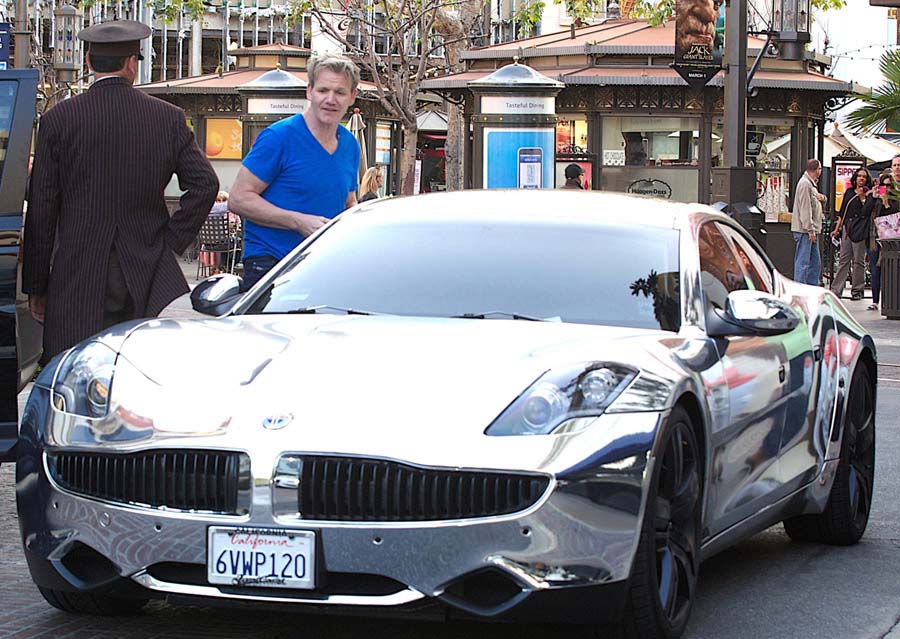 However, despite his love of Ferraris, Ramsay remains willing to admire other automobiles. Here, he checks out Justin Bieber's Fisker Karma. Similarly, you have to wonder if he can set his cordon bleu status aside and gaze longingly at Big Macs and cheeseburgers, while inside his soul he feels the tug of an unspeakable desire…. 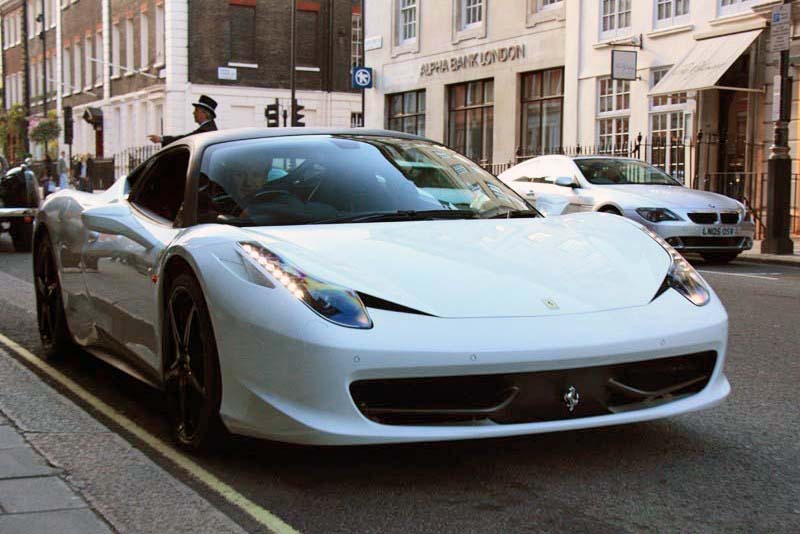 Despite the fact only a year had passed since his entire fortune was in crisis, Ramsay was already seen zooming yet another Ferrari down the streets of London in this youtube video. 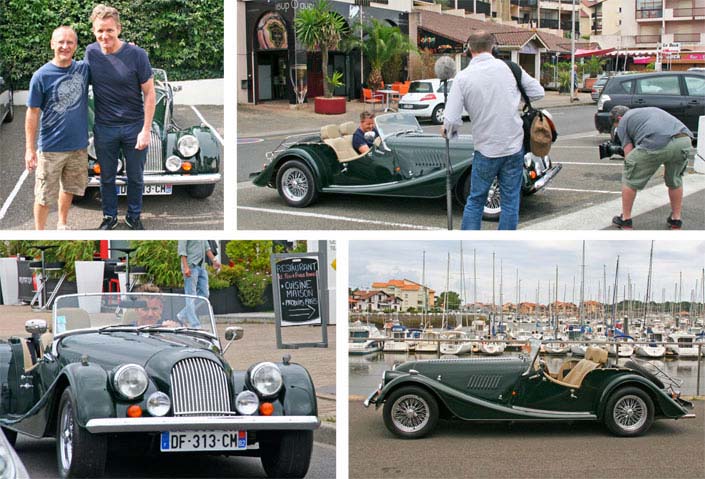 There's perhaps only one reason Ramsay would turn his back on his Ferraris, and that's for his TV shows. (Those being, of course, the reasons why he can afford Ferraris in the first place.) In one episode, he zipped around France in a Morgan, a rare automobile manufacturer in England which only builds a few hundred cars each year. Still, you have to assume it wasn't long until he returned to his garage and reunited with his one true love. 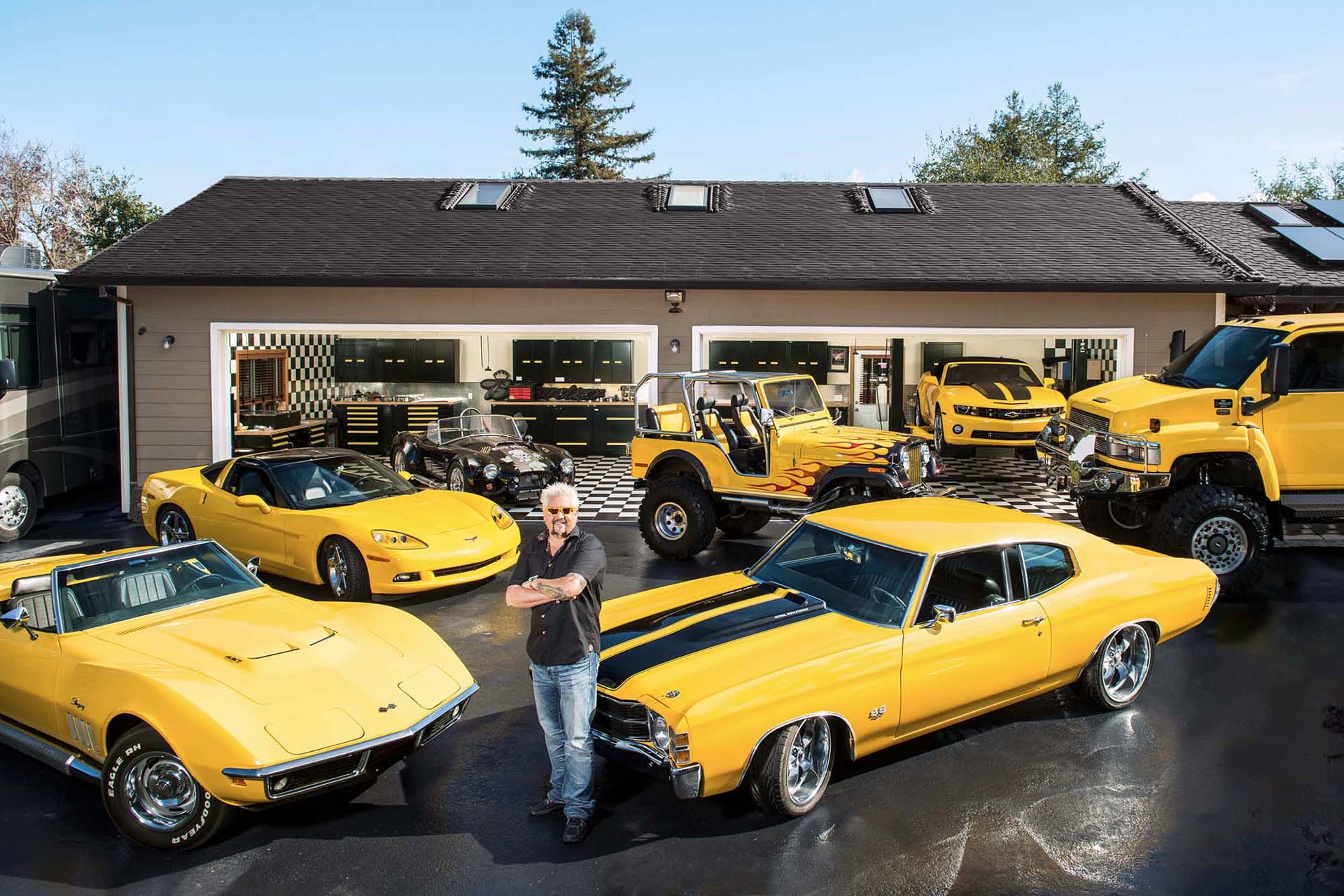 The flamboyant Fieri favours yellow automobiles, including a Camaro, Corvette, and a Lamborghini Gallardo. Incredibly, a few years ago, his Gallardo was stolen from a dealership by a 16-year-old, who was later sentenced to life in jail for other crimes. 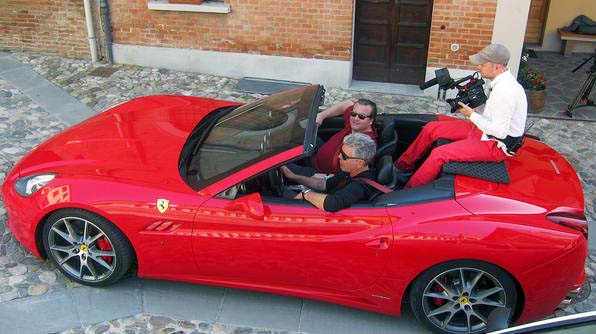 The only chef who rivals Ramsay when it comes to profanity and outragessness is Bourdain, who also sports his own Ferrari. While touring Italy Bourdain zipped around the ancient Roman roads in a cutting-edge piece of modern tech: the Ferrari California. 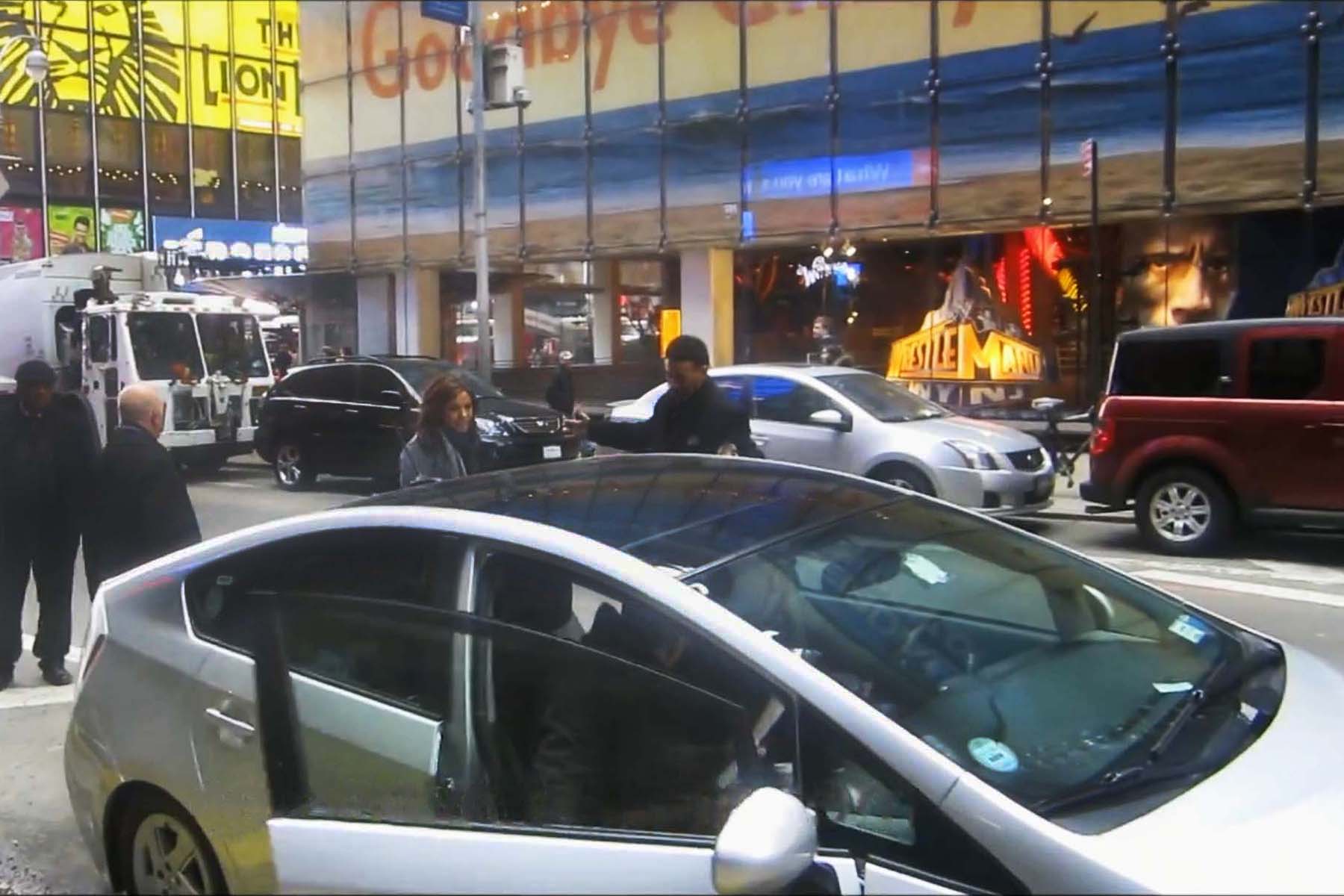 After all these awesome sports cars, we end with a chef whose primary concern is the environment. Ray is so insistent on driving a hybrid, particularly the Prius, that she not only drives one herself but chose a car service which could chaffeur her around in one, as shown in this youtube video. Not for her, stretch limousines or fancy Ferraris.