A glimpse at the everyday future.
Advertisement

A glimpse at the everyday future.

Lean into it, give it some gas, or just sit back and let the car do the driving: in Toyota's version of future mobility, all three are possibilities. The company's brought an international crowd to Fuji Speedway, and while hooning a fuel-cell vehicle around a short-course seems a bit odd (even weirder, perhaps, than trail-braking a Prius through the same circuit), the products on display are surprisingly polished.

First off though, we'll have to head away from the circuit and straight to downtown Tokyo, where Toyota's self-driving Lexus sedan is about to take to the road. The car, a modified GS450h hybrid, is equipped with Toyota's “Mobility Teammate Concept,” and features a hood emblem that looks like a driver fighting over the wheel with a robot. Foreshadowing? 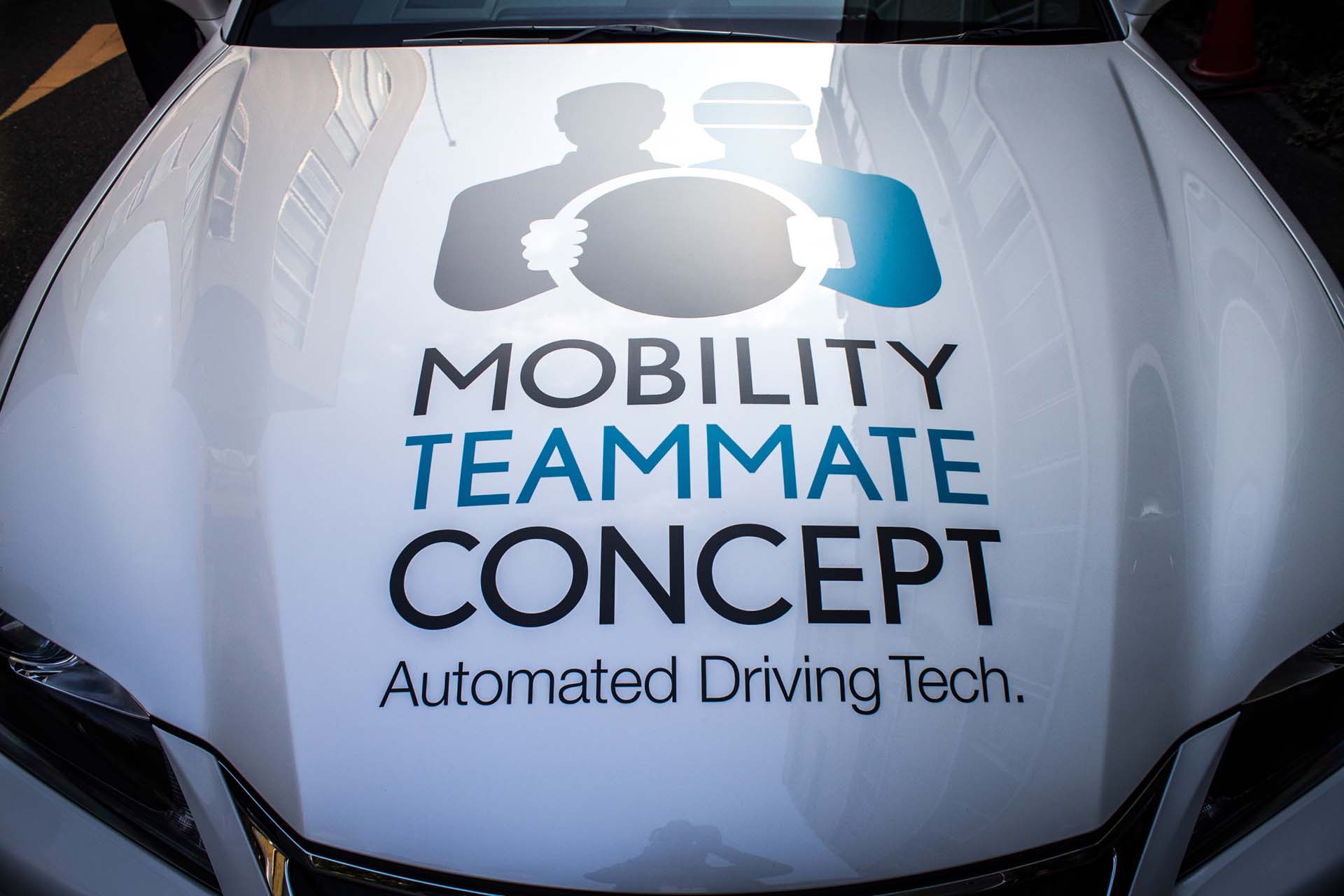 Not really. The GS, which is fitted with multiple cameras in roof spoilers, and several radar sensors, is intended to be more of a robotic assistant than an out-and-out robo-chauffeur. The human attendant drives the car out of the parking lot, through the city streets, and then engages auto-drive just before merging onto the highway. Just like Jack, Audi's highway capable self-driving semi-autonomous car.

As you might expect, the software is slow, cautious, and competent. The GS merges easily onto the typical raised Tokyo highway all by itself, and then maintains its lane, using a combination of cameras, radar and GPS. 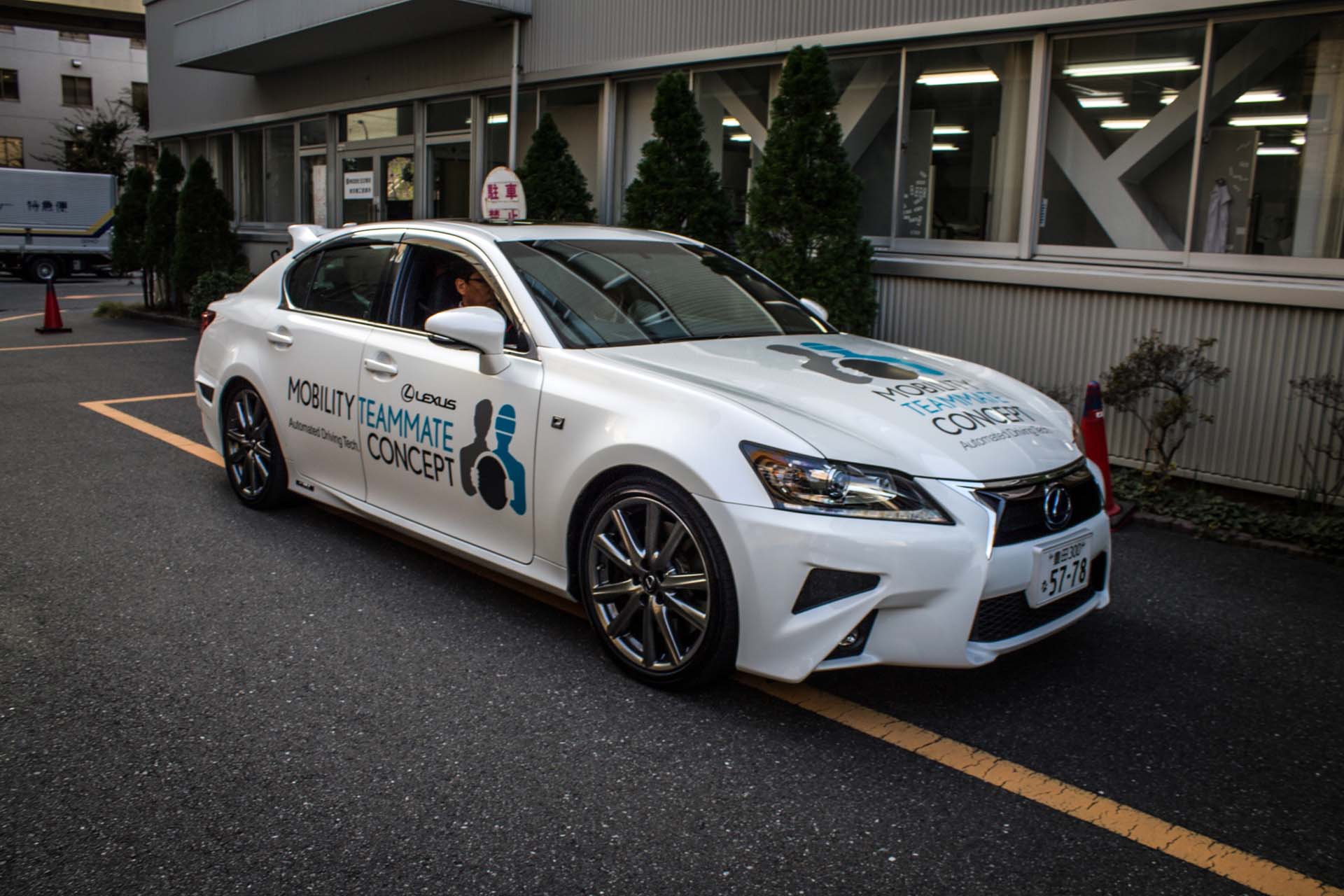 It sounds impressive, yet there's a great deal of work to do here. The Toyota/Lexus system is using a camera-mapping function tied to the GPS to better map out actual street layouts. Effectively, it's building a data plan so that it doesn't have to rely as heavily on camera and radar sensors, unlike competing autonomous vehicles from Nissan, for instance. Also, the Team Mobility Concept only works on the highway, and is seen as a driver's assist for Tokyo's oft-snarled roads. It travels only at the speed limit, and doesn't appear yet capable of handling urban duties.

Still, as a luxury feature, a more-advanced form of cruise control would certainly make for easy bundling together with already currently existing technology packages. Lexus plans to have something ready commercially by 2020 for the domestic market, but whether or not such tech would be applicable to the North American market remains to be seen. 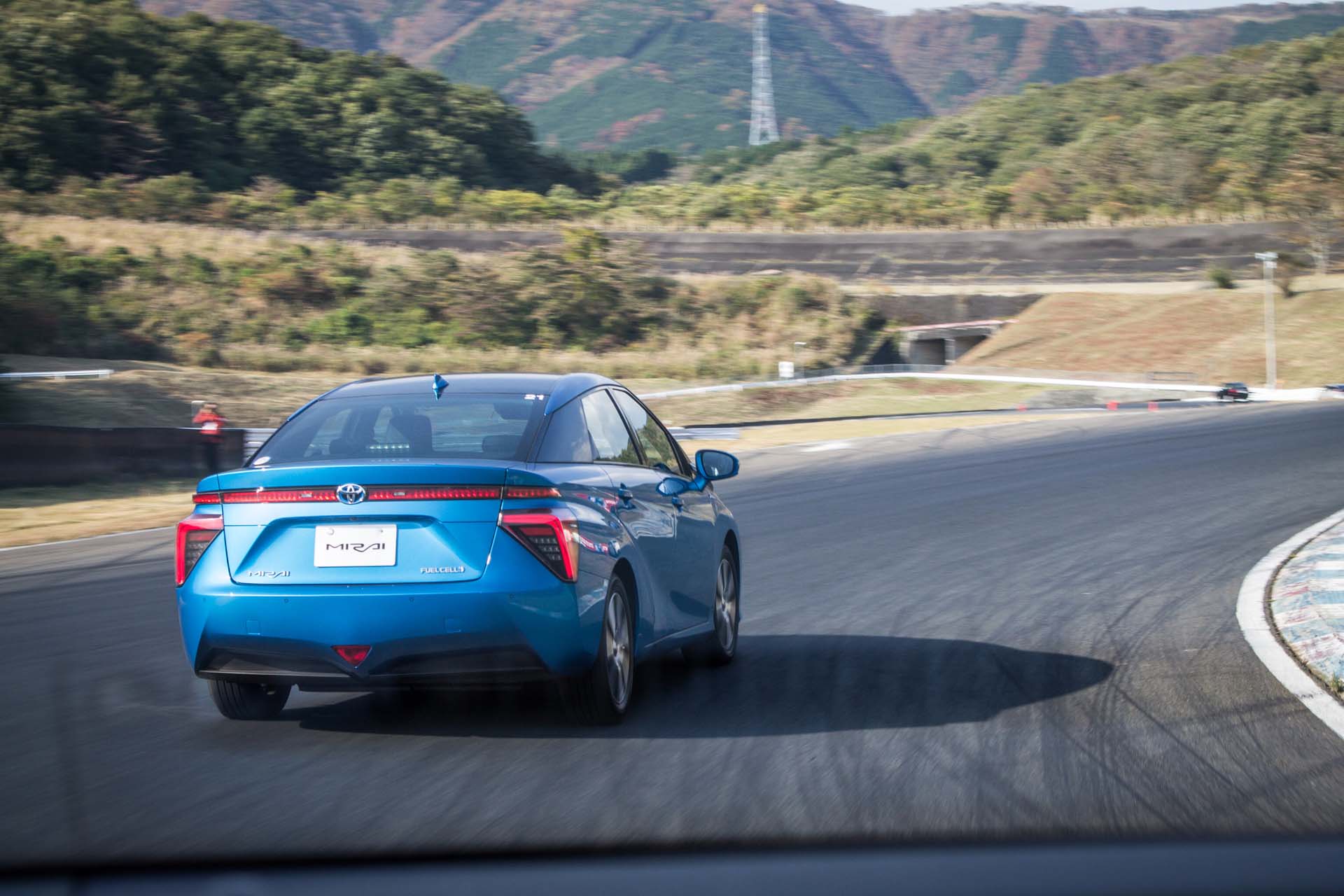 Something you can get in North America, though not in Canada, is the Mirai fuel-cell vehicle. Powered by hydrogen, this eco-conscious machine produces nothing except water, which stores up in a little reservoir until you depress a little button to the left of the steering wheel and it pees out all over the road. On the track, I attempted to use this function in the manner of Spy Hunter or James Bond, hoping to send pursuing drivers spinning into the weeds. We weren't actually going that fast.

The Mirai's actually a pretty quick machine. The AC electric motor makes an unremarkable 152 hp, but as with all EV cars, it's the torque that delights. 247 lb-ft is available from a nominal 0 rpm, and the Mirai whizzes forward any time you get the steering wheel straight.

Could you argue for such a thing as a sort of next-generation of Prius? Well, it's expensive, at a hair under US$60,000, and the refuelling infrastructure simply doesn't exist in Canada. Hyundai runs a very small FCV program in Vancouver, which has just the one fuelling point – although they do throw your H2 fill in for free as part of a leasing program. Even with all the development, it's early days yet. 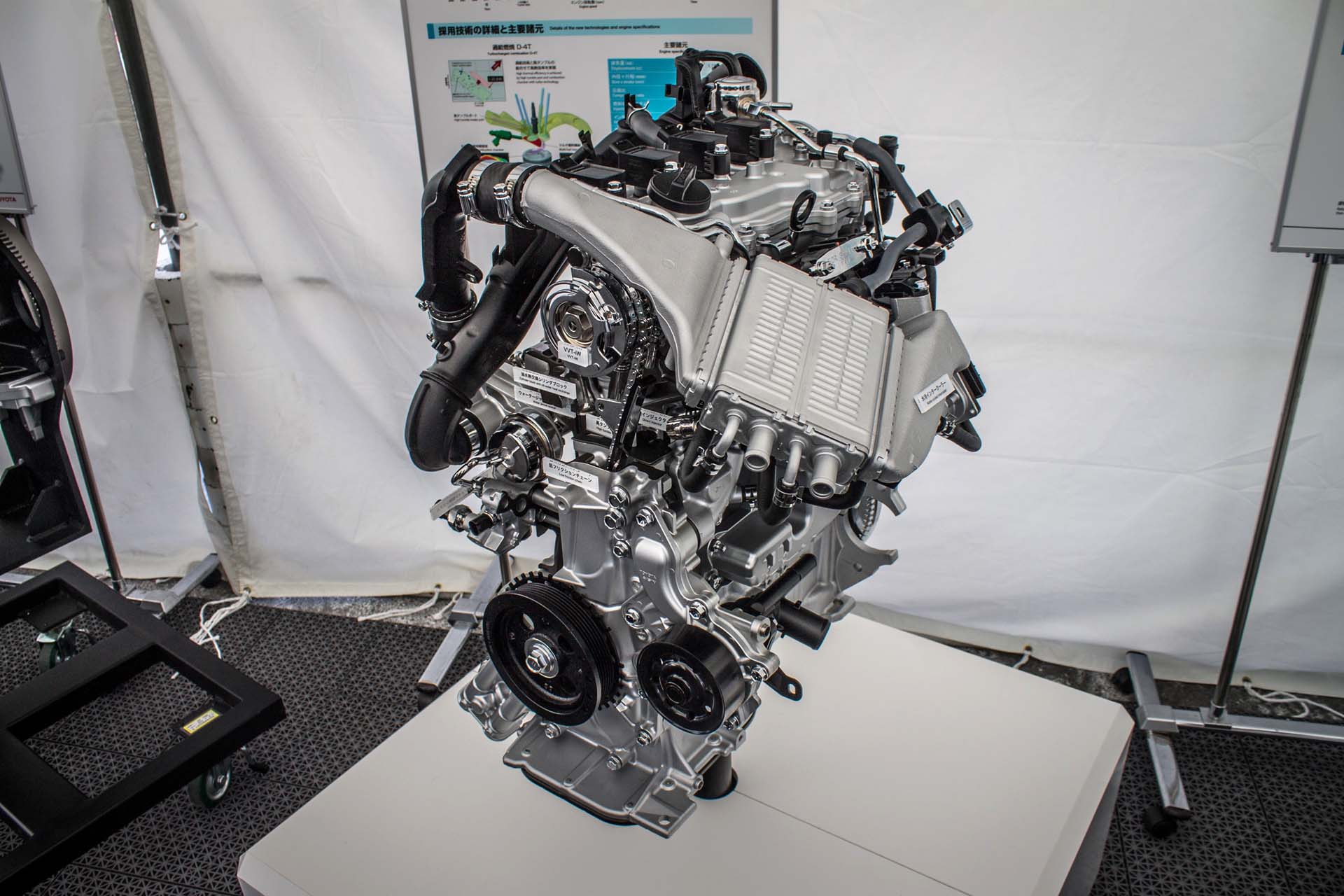 Moving towards technologies already on the market, Toyota showed off three of their new turbocharged engines, including the stout turbodiesel offering available for the Japanese home market Land Cruiser. Also very popular in Australia, we only get this car as a Lexus (the mighty LX), and only with V8 power.

Don't expect to see a turbodiesel Toyota anything for a little while. On the other hand, a 2.0L turbocharged four-cylinder is already available in the Lexus NX200 crossover, and the IS sport sedan as well. I had a go at a Toyota Crown so-outfitted, and it had more than enough steam to move the big car with some alacrity. An F-sport version of the IS200t might actually be very un-Lexuslike in its zippiness.

But let's go smaller and cheaper. Also on offer for test-driving was Toyota's Auris, the Japanese version of the Scion iM. This features a tiny new 1.2L turbocharged four-cylinder making 114 hp and 136 lb-ft of torque: that's less horsepower than the iM, but more torque, and more of that torque is available down low. Even with a CVT transmission, the Auris felt plenty zippy, and should return excellent fuel economy. However, I'd again expect the Canadian market car to stick to its tried-and-true 1.8L powerplant – it's not very exciting, but it gets the job done. 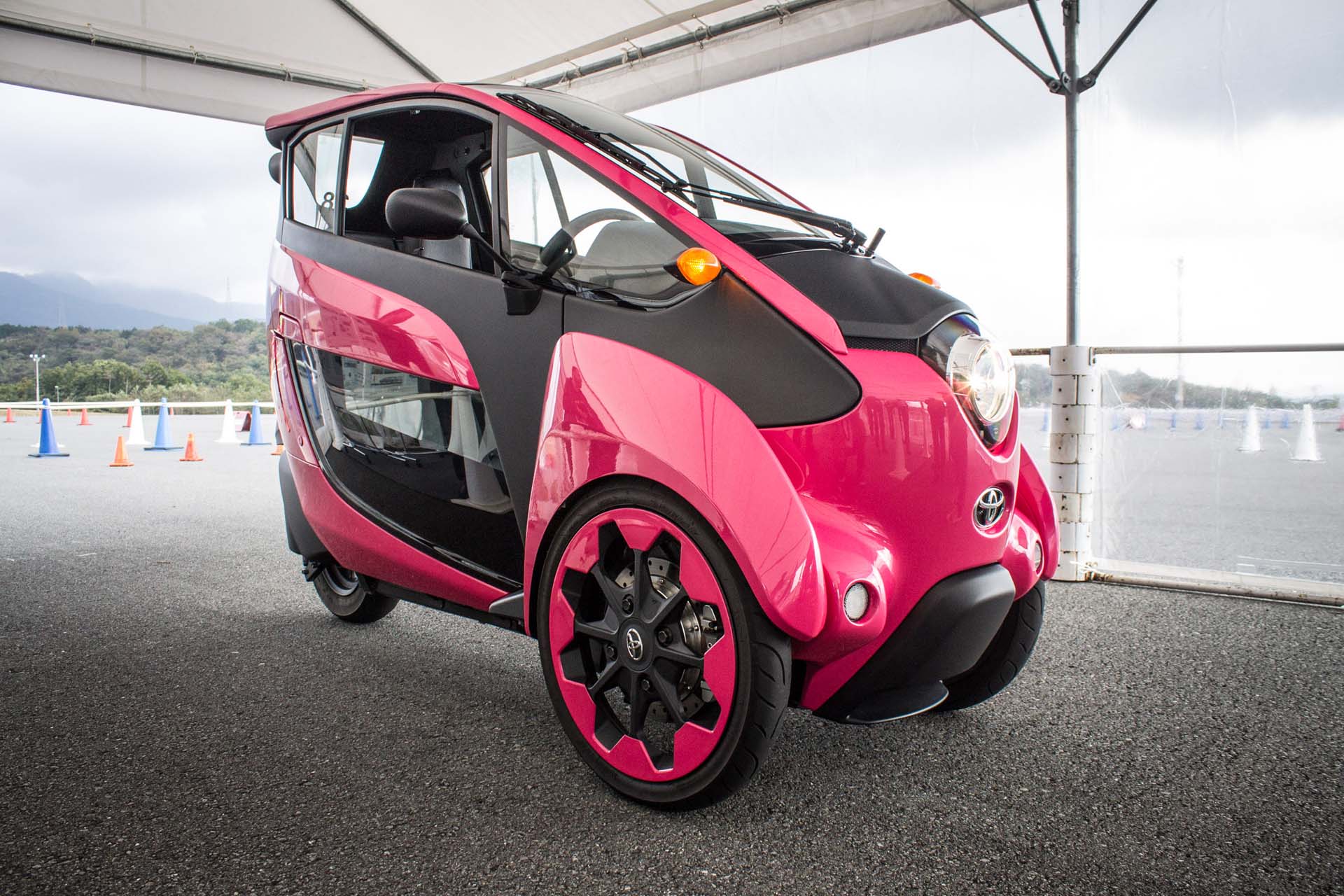 For a last bit of frivolity, Toyota let us have a go in the i-Road, a thin little three-wheeler with an interesting trick up its sleeve. Instead of merely rolling around at low speeds, the i-Road is capable of taking a lean into a corner, tucking up one of its two front wheels and carving around the cones.

With only five horsepower and a range of just about 50 km, the i-Road is easily the least powerful thing I'll drive all trip. In spite of this, it's absolutely wonderful, the most fun you can have without a motorcycle license. The leaning effect takes some getting used to, but eventually the driver can figure out how to keep momentum up without activating the traction control – it's completely impossible to tip the thing over.

As a small personal mobility machine for getting an individual across town on a short, urban commute, it wouldn't just be practical but really good fun. We don't know what the future yet holds, whether it's going to be autonomy or alternative fuels that'll lead the way forward. However, at least one vision of what's up ahead looks like fun.