If your ride is overdue for its timing-belt change, you’ve got a ticking time bomb under your hood.
Advertisement

If your ride is overdue for its timing-belt change, you’ve got a ticking time bomb under your hood.

Welcome to Goof of the Month! Every month, we ask for stories from our network of mechanic pals which highlight the need to understand one’s vehicle, how to maintain it, and how it works. We read the submissions, check out the stories, and pick the winner, announcing the monthly Goof in our regular column about the most mechanically declined folks on the road today.

This month’s story comes to us from Paul Kennaley, a mechanic in Sudbury, Ontario, and doesn’t have a dramatic outcome that resulted in a catastrophic failure (unlike last month’s story), though it easily could have, at any moment, with little notice.

This month, Kennaley reports an apprehensive client having his vehicle dropped off at the shop for a timing-belt change that was many thousands of kilometres overdue.

The customer brought in his Toyota Sienna for an oil change, and sheepishly asked if it had a timing belt that might need to be changed (he was hoping it didn’t). The vehicle was a higher-mileage model, had been bought used, and had never had its timing belt replaced while the current customer owned it.

Depending on the year, make and model, many vehicles use a rubber timing belt to control valve timing. The belt connects and synchronizes the crankshaft and camshaft pulleys, operating the valves in a specific relation to the position of the crank. In a nutshell, the timing belt sets the mechanical rhythm of your engine.

A timing belt it is a part that needs to be changed on a regular basis, and before it breaks. It gives no warning in the form of a wear indicator, check engine light or alarming noise before it fails. That’s why there’s no actual complaint in this month’s story.

“This customer was relatively new to us here at the shop, and he’s driving a Sienna that uses a timing belt in its engine. He’s the second owner, but he’s owned the vehicle for longer than the timing belt change interval. Someone probably asked him if the work had ever been done, or maybe, he read an article or heard something on TV about timing belt servicing.”

“He was a little apprehensive when asking if his vehicle had a timing belt. Many customers are: replacing one can be pricey, and a huge number of people just ignore their timing belt. We call it timing belt denial. We see these customers somewhat regularly, coming in with blown engines.”

After scheduling the timing-belt change for a few days later, the customer returned with the Sienna and Kennaley got the old belt out, immediately calling me in for a look, and to take a photo to share with readers, to stress the importance of timely timing belt changes. The belt was cracked deeply, between nearly all of its ribs, and frayed around the edges. According to Kennaley, the timing belt was probably 70,000 kilometres overdue for its replacement. Miraculously, it had held up.

“This customer was lucky,” Kennaley comments. “Readers shouldn’t take this example to mean they can stretch the intervals beyond what the factory recommends. This isn’t a part you change once it’s worn down or worn out. You might get some extra miles out of it, or maybe not, but in any case, it’s just not worth the risk. I’ve seen belts let go with just 10,000 extra kilometres on them. This belt was in really bad shape and could have let go at any time, even just while starting the engine. Plus, this time of year, when your engine oil is thick on cold mornings, there’s even more strain on your engine, and on the belt.” 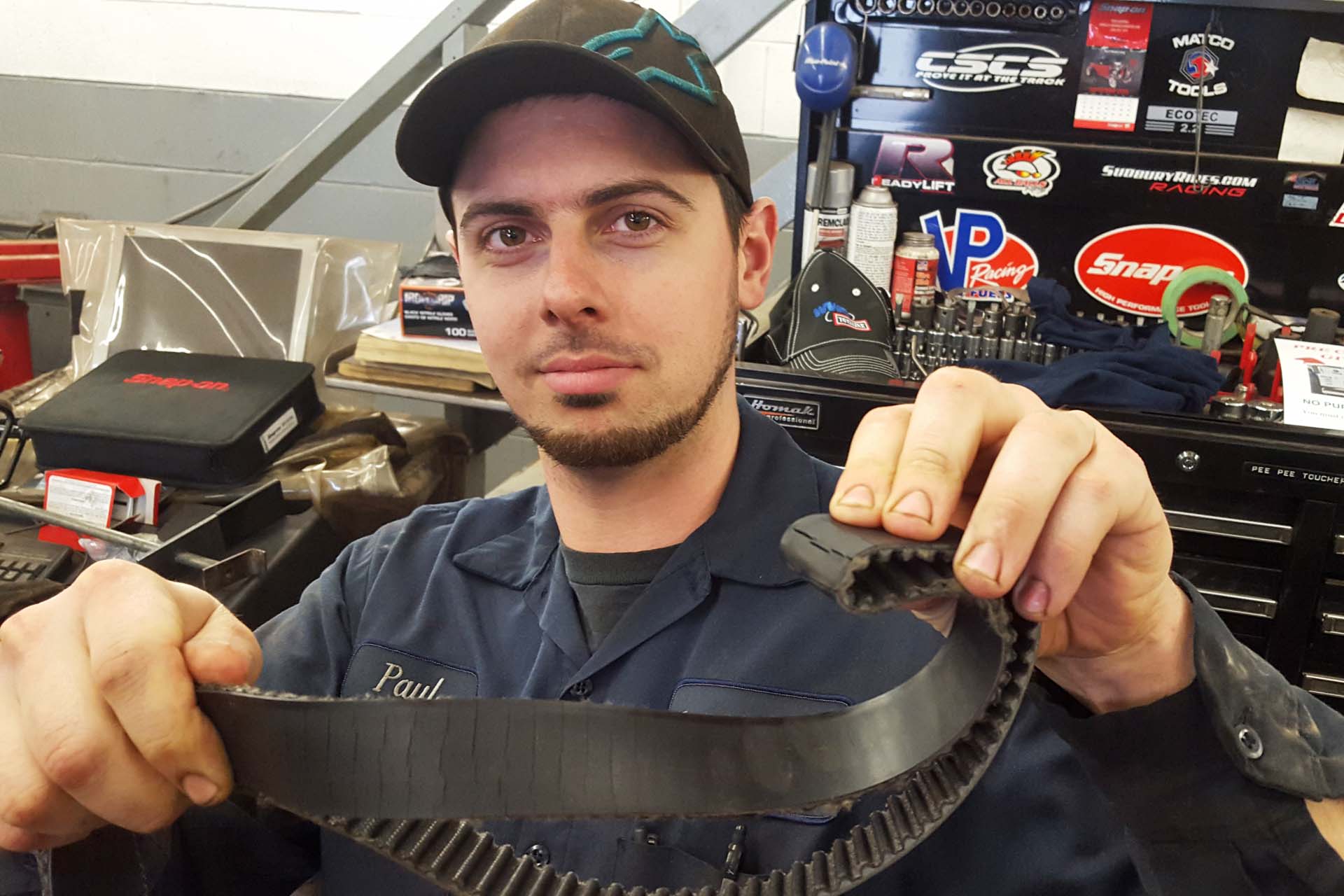 In this particular case, the outcome was favourable. The customer learned about his timing belt’s needs in due time, had some luck that his overdue timing belt hadn’t shredded, and got a few-hundred-dollar bill for the job: a fraction of the cost of the new engine he’d have needed if the outcome was less favourable.

Kennaley adds, “When the timing belt lets go, as a bare minimum, your engine dies. You won’t be able to limp it to the shop, and you’re dead on the side of the road. If you’re lucky, that’s all there is to it, and you’ll escape any severe damage. If you’re not, you’ll have valves smashing into pistons, breaking things, and destroying your engine, literally, in fractions of a second.”

If you’ve determined that your vehicle has a timing belt, be sure to have it changed ahead of its recommended service interval – which tends to be between about 100,000 and 150,000 km. Check your owner’s manual to be sure, or consult your favourite dealership or trusty mechanic.

Two other notes. First, remember that if a timing belt isn’t changed on time and winds up ruining your engine, you won’t be covered under any applicable warranty. Second, in many cases, it makes sense to change the water pump while changing the timing belt, as this component is typically easily accessible during a timing belt service, and may prevent redundant labor costs.

Finally, remember that your particular vehicle may not have a timing belt at all. Some models use a timing chain to do the same job, and that is generally considered a maintenance-free part as long as owners stay on top of their oil changes.

“More and more vehicles are doing away with timing belts,” explains Kennaley, “We’ve actually had long-time customers say they avoided buying a car with a timing belt because of the maintenance cost. With a timing chain, in most cases, just keeping up on your oil changes is all you need to do.”