Passengers Are People, Too

Normally when the person you're driving with takes their hands off of the wheel at 130 km/h, it's cause for alarm. How, then, to explain the sensation that comes over you when the individual in the left hand seat has had their hands in their lap the entire time you've been travelling at speeds that would land you in traffic court on public roads? Honestly, when it happened to me, I was absolutely calm. Part of that was because I knew it was going to happen, but mostly my serenity flowed from the fact that the actual pilot of the car in which I was riding wasn't there in the cabin with us at all.

The high-speed oval at Kia Motor Company's California proving grounds facility is exactly where you'd want to experience autonomous driving, especially if it was your first time. Its endless acres are crisscrossed by a labyrinth of two-lane roads, off-road trails, skid pads, and testing zones, most of which are framed by the three-lane highway simulator I found myself blasting down inside the automaker's first self-driving vehicle. This unique version of the fully electric Kia Soul EV was perfectly at home navigating its way through the carefully controlled conditions out here near the Mojave Desert, but in truth, I'd spent most of the day discovering that the training wheels are more than ready to come off of some aspects of Kia's autonomous development program. 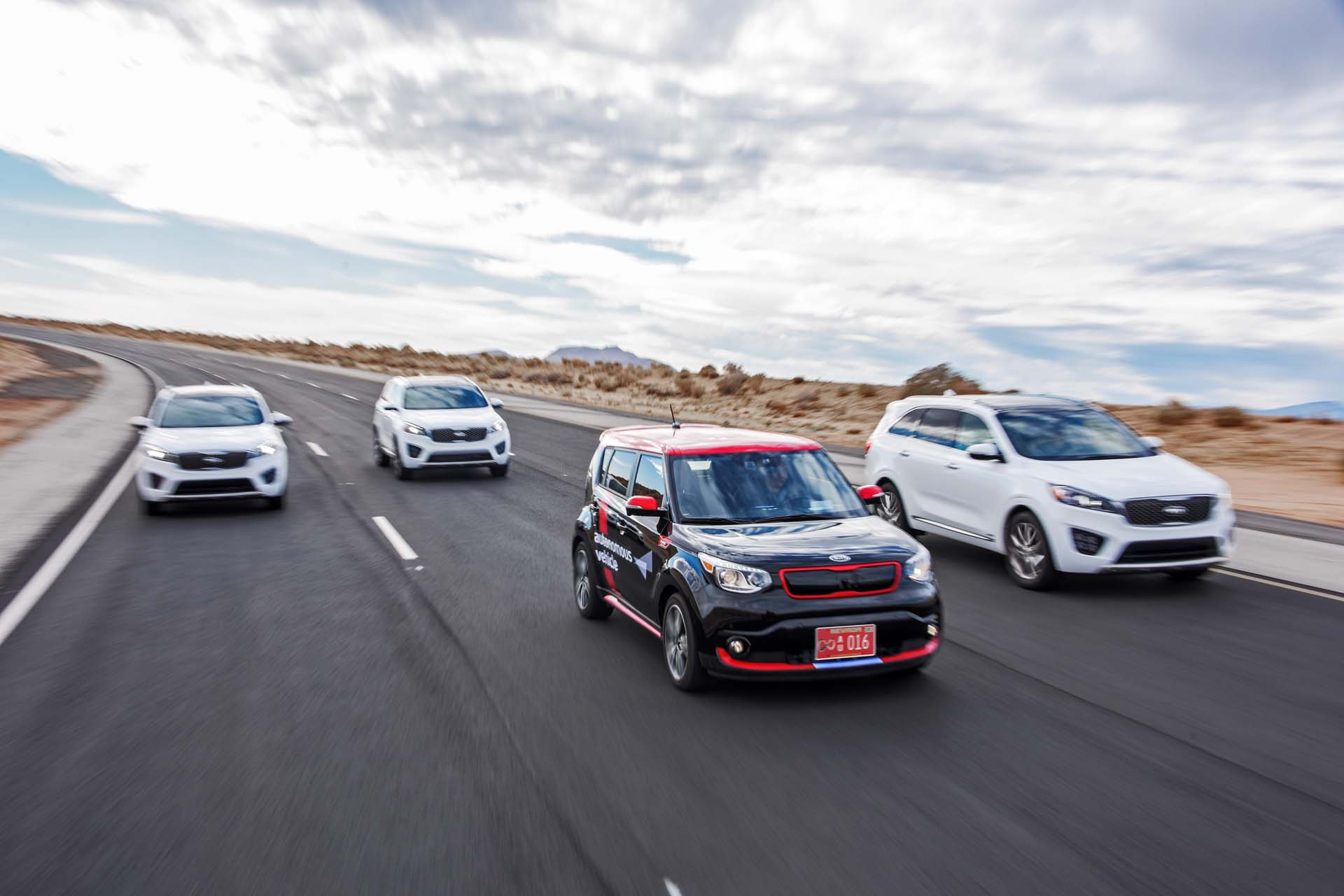 Kia doesn't dream of a world where humans have been relegated to the backseat and machines are the only ones left plying our civilization's greatest monument: the system of highways and rural lanes that link us to our kin and our country like asphalt veins across weathered, earthen skin. Rather, the company's research and development team is far more interested in how self-driving technology can be leveraged, little-by-little, to boost the safety of these same roads as well as improve the overall experience of the individuals along for the ride.

That Kia has selected the Soul EV as its chariot in the exploration of autonomous driving's potential is no surprise. The ability to precisely control the vehicle's all-electric drivetrain offers a software advantage when linking the small crossover to the network of sensors and circuitry that makes its independent operation possible. Specifically, the Soul EV has been outfitted with radar, lidar, and a system of cameras that offer 360-degree imaging coverage at both short and long distance whether it's out on the road or nestled into its parking spot.

All-seeing eyes are only part of the autonomous equation, however. Self-driving cars need to know not just what's around them but also where they are, and then use that information to situate themselves in a very busy world. To this end, the autonomous Kia Soul EV relies not so much on the vagaries of GPS – a signal that's not nearly accurate enough to be trusted in tight quarters – but rather calls on hyper-accurate maps that offer a level of precision that simply can't be downloaded from a satellite in real-time.

Once set into motion, the Kia Soul EV's autonomous capabilities are impressive. My phrasing here is specific, as Kia's implementation of its self-driving features requires a human trigger; the vehicle has not been designed as a full-autonomous model, but rather one which sits one step below that classification according to the criteria employed by the Society of Automotive Engineers. 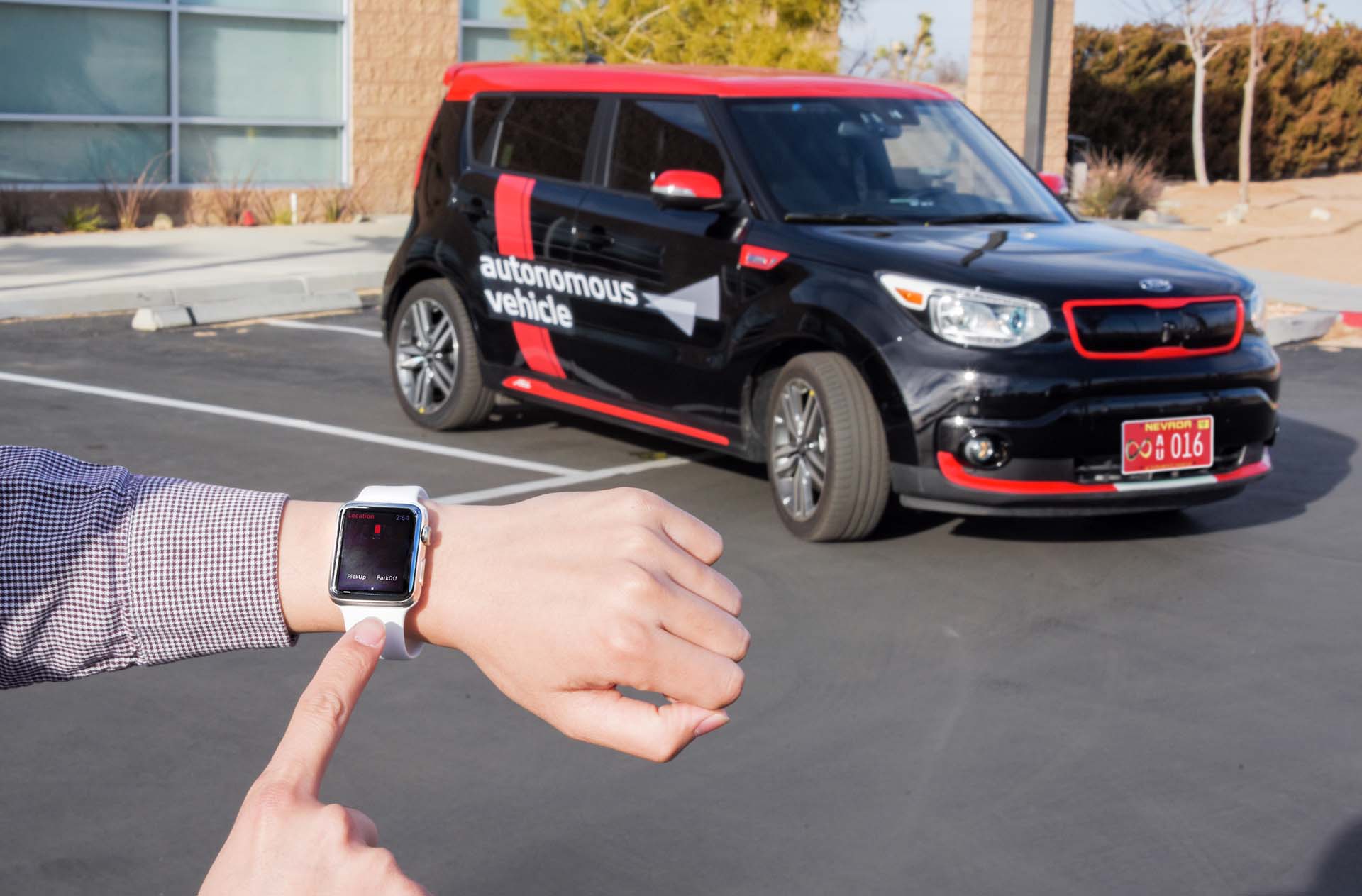 This means that our experience began when a member of Kia's R&D team called the crossover to where we were standing, using his smart watch, from a distance of roughly 15 meters. Once the Soul EV had rolled past us, stopped, and then reversed to precisely position itself in front of our group of riders, I slid into the passenger seat and thought back to my first experience with Kia's autonomous electric vehicle a few months beforehand in Namyang, South Korea. There my time in its clutches was limited to a course delineated by pylons across a vast expanse of blacktop used for a variety of testing purposes at the company's development headquarters.

Here, things would be much different, with the opportunity to run through the vehicle's full suite of autonomous features. In addition to its ability to both park and unpark itself in the absence of a human presence (not legal on our side of the Pacific, but still a neat parlour trick), the Soul EV also features a pair of self-driving programs divided between Urban and Highway parameters. Our engineer/break-glass-in-case-of-emergency chaperone used the center stack's touchscreen to initiate Urban driving, and we were released into the wild.

Or should I say, 'released into a perfectly mapped, and carefully monitored desert laboratory.' Still, Kia did an excellent job of ensuring that the autonomous EV would put itself through all the necessary paces – the car was asked to wait for closed gates to open, as well as deal with stop signs, stoplights, and oncoming traffic, all of which it did without exhibiting any alarming decision-making. If anything, around town the Soul EV came across as overly cautious, pausing several heartbeats more than any flesh and blood driver would after a stop, and giving traffic a wide berth. 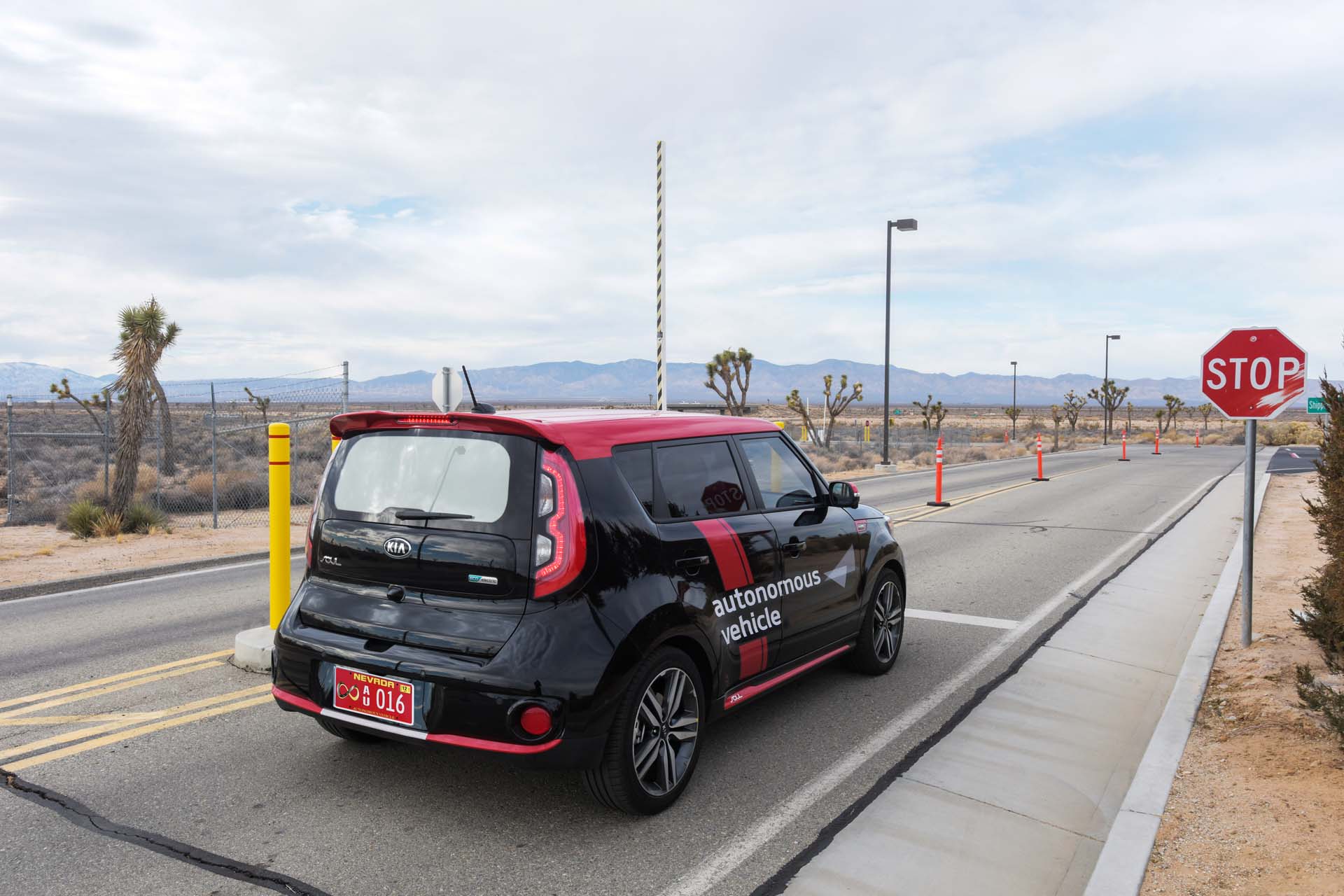 In order to transition between the rabbit's warren of surface roads and the facility's highway loop, our engineer was required to take over the wheel and merge the crossover up the entrance ramp before engaging Highway mode – another indicator of Kia's decision to implicate the human factor in its autonomous strategy. Once there, the Soul EV continued to impress with its ability to process changing situations at high rates of forward progress, including getting cut off by other drivers, performing passing manoeuvres on the left or right (after receiving input from the driver via the touchscreen) when encountering slower traffic, and of course parsing bumper-to-bumper traffic.

At one point, our driver's side passenger even faked his own death, slumping over in his seat with his eyes closed to demonstrate the vehicle's ability to detect a medical emergency. The autonomous Soul EV safely transitioned across two lanes of traffic and parked itself on the shoulder, awaiting the arrival of emergency personnel which it had itself signalled. Following the engineer's miraculous recovery, the self-driving system showed off its ability to be electronically tethered to another vehicle – in this case, the ambulance that arrived on our 'scene' – in order to be virtually towed to safety.

We're Still Part Of This Future

Kia's autonomous driving technology (which the brand is calling Drive Wise) is impressive for how it delicately walks the line between taking the drudgery out of some aspects of the daily commute while also recognizing that there are limitations to what can currently be achieved in a self-driving vehicle. In speaking with the company's chief of R&D, Tae-Won Lim, it was clear that Kia has no intention of skirting around important issues such as how to keep sensors clean from snow and salt in the winter time, or the legal and ethical concerns associated with accidents involving autonomous vehicles. 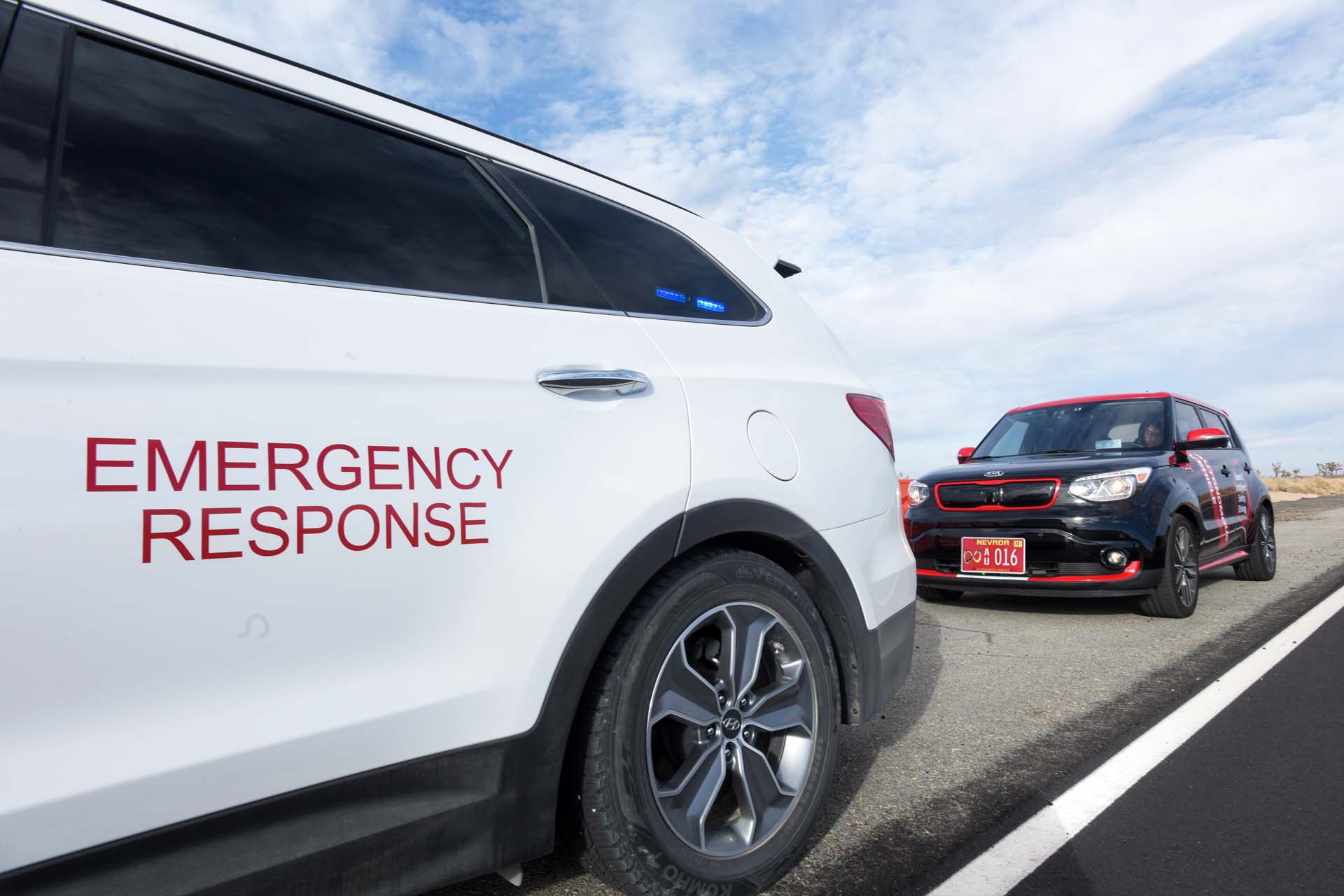 The automaker admitted that it doesn't have all the answers, but neither does it have an agenda to push – the plan is to slowly introduce successively more comprehensive self-driving systems between now and 2030 as an organic response to what the market requests, and what regulators allow for. Some companies out there may be convinced that we are inexorably inching our way towards a world where we are all passengers, but Kia remains convinced that the people who buy its cars should still have an important say in what happens out on the road.