The Art of Tailgating: An American Institution Carpark fandom at its finest.
Advertisement

Carpark fandom at its finest.

Rumour has it that the 24-hour race at the Nurburgring race track is quite the spectacle; apparently, the smoke from the barbecues alongside the track is so thick that it actually becomes tough for the drivers.

I wonder, though, if the revelers with their bratwurst and braus would have anything on the folks I spent the better part of the day with last year. Only there weren’t any race cars at all. There was no exotic location, no paddock pass – indeed, there was no paddock – no cameramen, and there were no checkered flags.

There were flags of a sort, though. Many of them. They were all of a single swatch of colours – blue, neon green, and white – and they were being held and waved by some of the most fervent fans I’ve ever seen, anywhere. Our “exotic” locale? A parking lot about two blocks away from one of the loudest sports stadiums in North America. It’s called CenturyLink Field, and it’s the home field of the Seattle Seahawks of the National Football League.

When I say “loudest sports stadiums”, I mean it; the NFL does track crowd decibels, and CenturyLink always ranks right at the top of the list.

Which wouldn’t be surprising if you started the day as we did, tailgating in that parking lot out the back of a 2015 Ram 1500 EcoDiesel pick-up. Indeed, there are few other vehicles that should be used for this, other than a Ram 1500 pick-up. My colleague and I thought we were well prepared; we had the cooler full of beers, our tailgating spot was paid for – yes, in an overnight lot reserved for tailgaters – and we has the customary “12 man” banner, the “12” being representative of the fans. Our banner even had the proper font, just like the players have on their unis. So we thought we had it all under control and that we’d be able to roll up in there and blend in with the blue-and-green clad masses.

Boy, were we wrong. Or at least we thought we were at first. 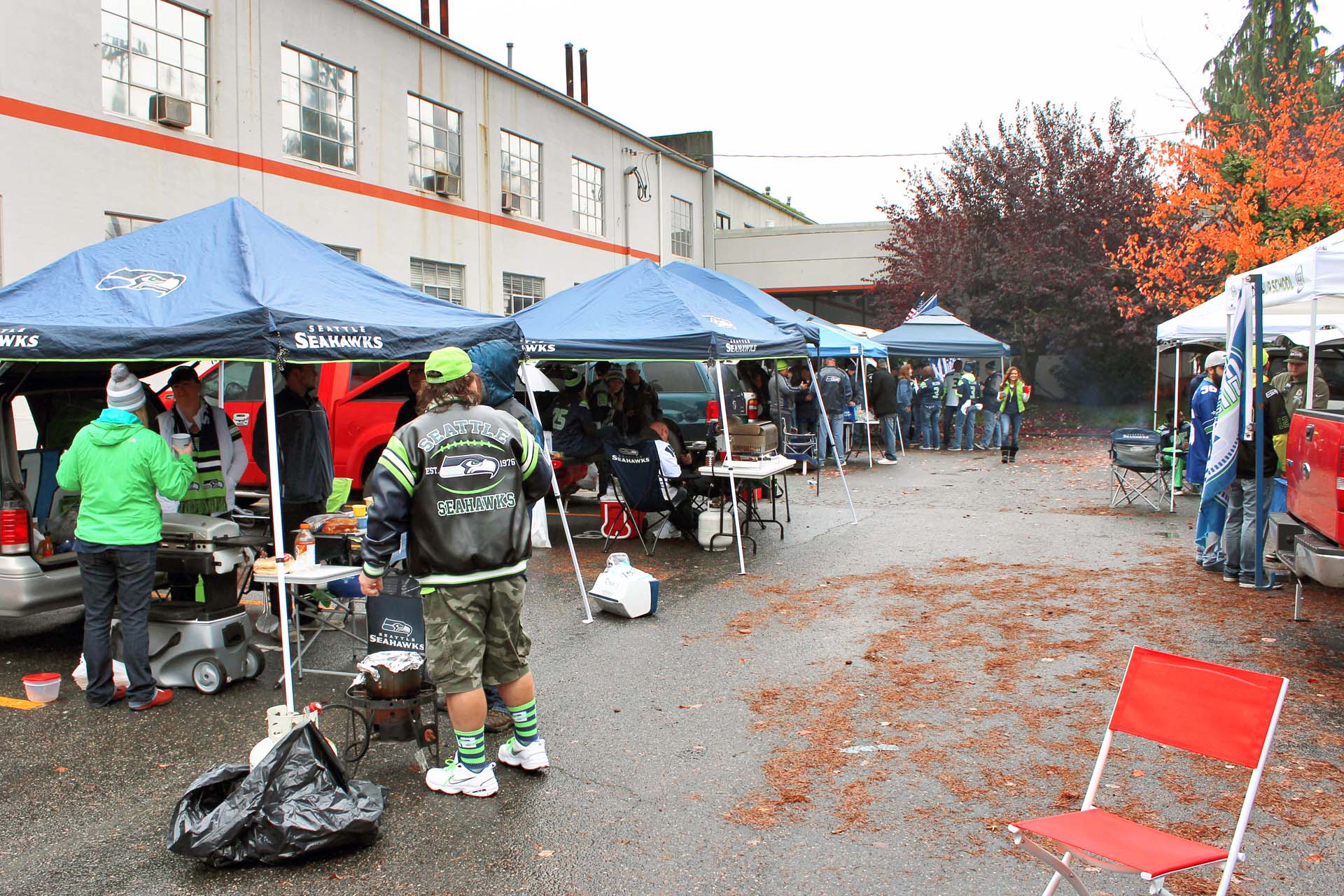 For starters, we arrived too late; being in the middle of dense downtown Seattle, the CenturyLink environs aren’t actually all that well suited for tailgating. There are no acres-wide parking lots as there outside MetLife Stadium in East Rutherford, NJ for example (East Rutherford being the home of the New York Giants, the Seahawks’ opponent that day). When you have a bunch of fans that don’t just pull up an hour before kickoff – they eat breakfast, lunch and sometimes dinner at their spot, these people – well, spots are limited.

We were lucky, though, managing to grab the very last spot in the area, which was probably only still there because it was half submerged from torrential rains the night before. This is the Pacific Northwest, remember.

So we rolled up in our diesel truck, though no one seemed to believe us.

Indeed, it’s hard to blame him; the Ram’s engine report is so far off what the typical diesel is, that it’s hard to believe it’s an oil-burner at all.

Things didn’t change for us when we stopped, pulled out our chairs, 12th man banner and cooler; oh, we were both wearing Seahawks jerseys and one of us, a Seahawks hat, but as it turns out, that was decidedly amateurish.

Picture, if you will, a parking lot so full of blue and green tents that you’d have a hard time believing it was a parking lot at all, but more a concrete campsite. Even many of the demarcation lines are covered by all manner of tailgating paraphernalia. 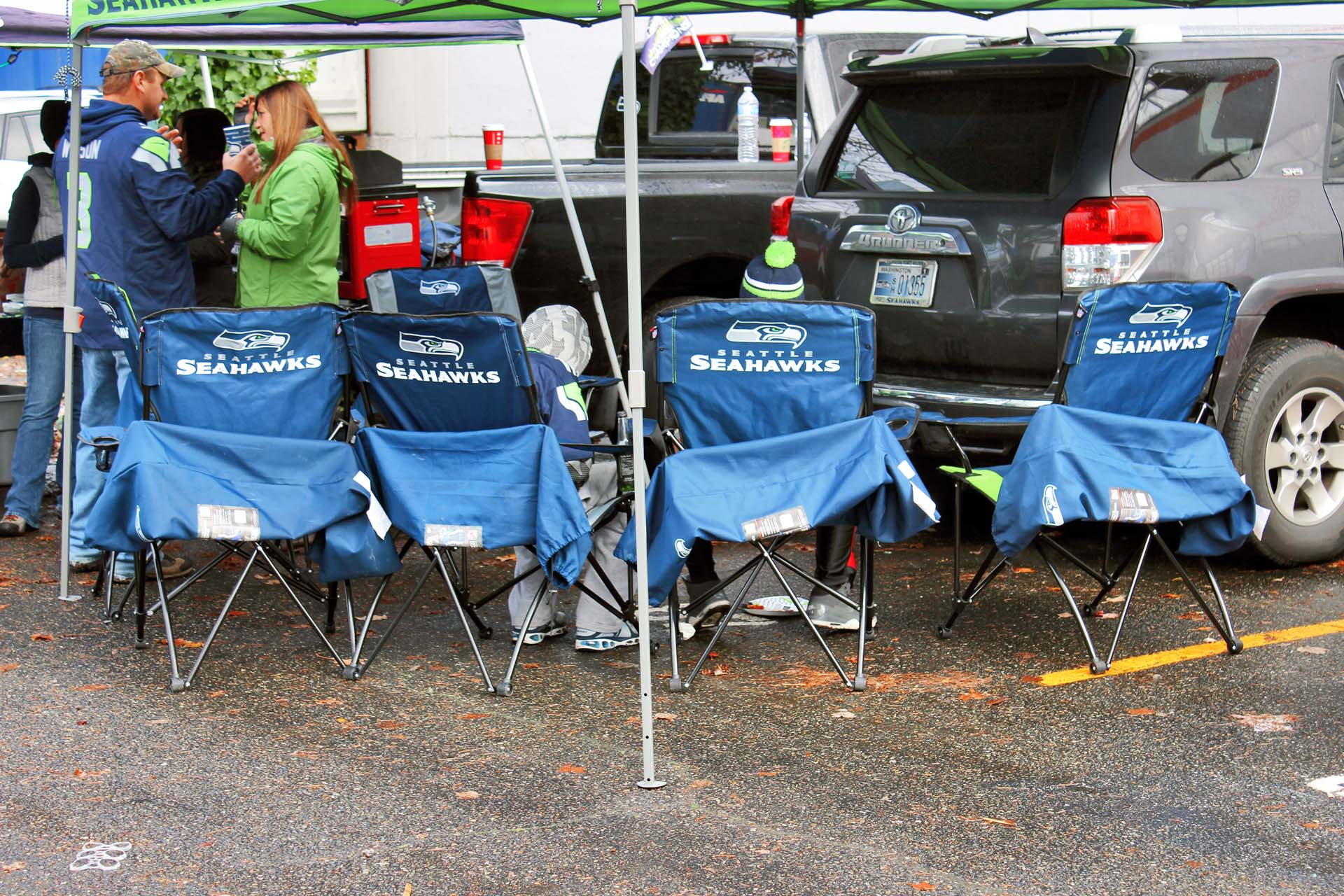 I’ll be the first to admit; when I first imagined the scene, I saw a bunch of folks, their trucks facing away from us, tailgates open, lawn chair, and a few coolers. Turns out, it goes a lot deeper than that.

Oh, there were lawn chairs. There were coolers, too. Just not in the same form as I was expecting.

Looking out form our spot, to the left was an entire family of five, all with matching lawn chairs. They had a tent. They also had a portable oven. That’s no joke; they had made roasted potatoes that morning for breakfast.

To our right? A group of eight, yes, with a tent, but so much more than that.

They also had a barbecue – a full-size one, not a portable Coleman flip-top – but that was just the first step in what they were planning for mean prep. You see, they had chicken wings, but a pox be on you if you plan on just taking one off the grill and going to town. If you were to do that, you’d miss the pride of the group: a real, bonafide deep-fryer.

So, needless to say, we felt a little under-prepared.

A little under-dressed, too; oh you’re wearing jerseys? Psshaw. Unless your socks, your headdress, your gloves (yes, gloves; they sell replicas of the gloves the receivers wear, in both amateur and pro spec) and your shoelaces aren’t Seahawk-themed, well, let’s just say we can tell you’re a first-timer. 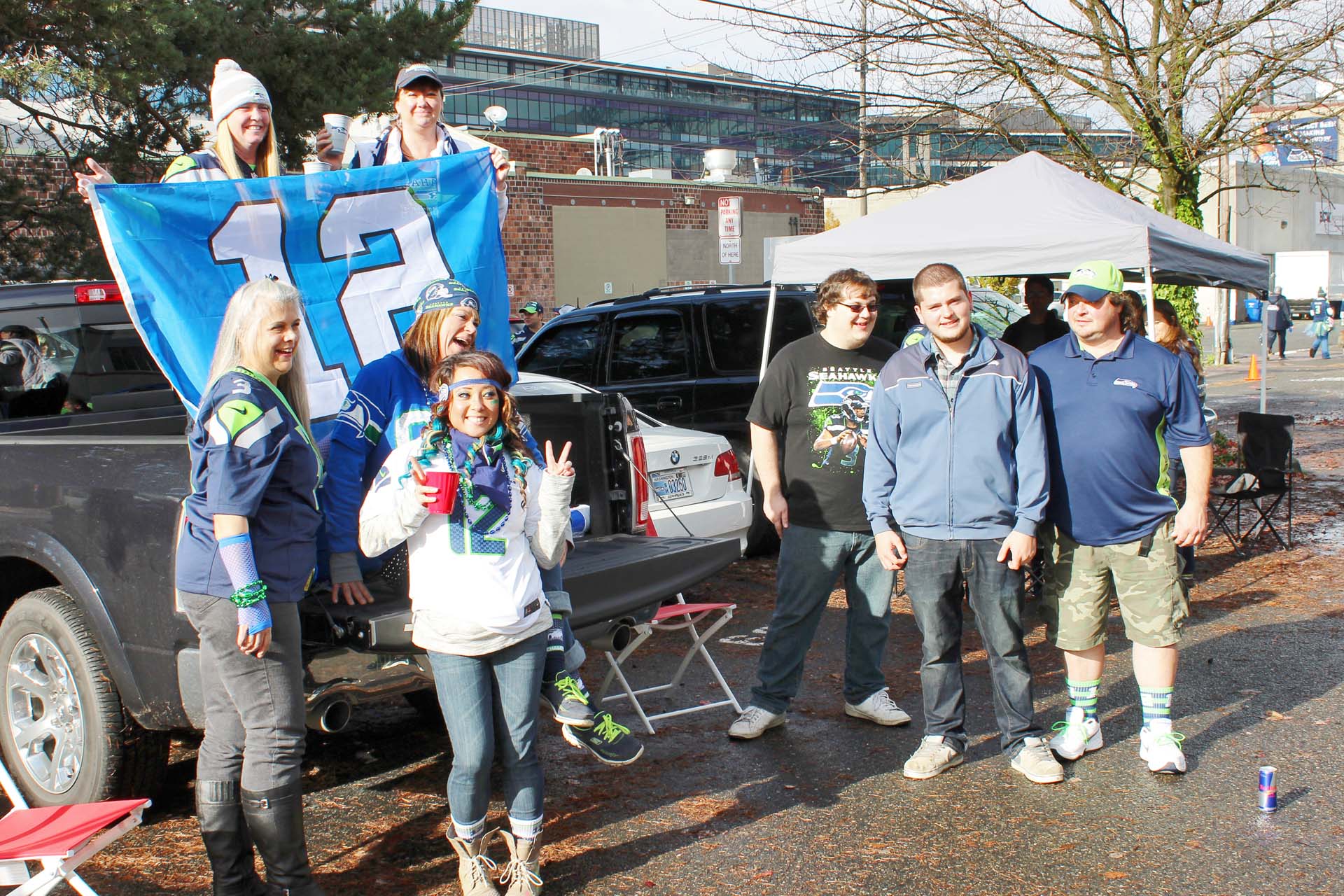 If I’m honest, it was that aspect of the whole experience that impressed me the most. Now, I don’t know if the one-step-removed-from-Sparta Oakland Raiders fans would be quite as inviting, but you get the sense that as soon as we pulled up, and as soon as we managed to (finally) rig that banner up to our tailgate, we were somewhat accepted by at least a selection of the group that was parked close by.

Luckily, it happened to be the group that had possession of the deep fryer. We didn’t even have to ask for a taste; just some admiring glances seemed to do the trick.

“Hey, you gotta try these,” they said. “And be sure to try this sauce. It’s called Jamaica Me Crazy, and it’s the best thing for chicken wings.” He reached for a tall, plastic jug of the stuff – I wondered how he picked it over the half dozen or so other sauces they had there. Needless to say, I was skeptical; I may not be a veteran football fan, but having been to the Anchor Bar in Buffalo, NY – what many call “the home of the original buffalo wing” – I think I know a thing or two about these. 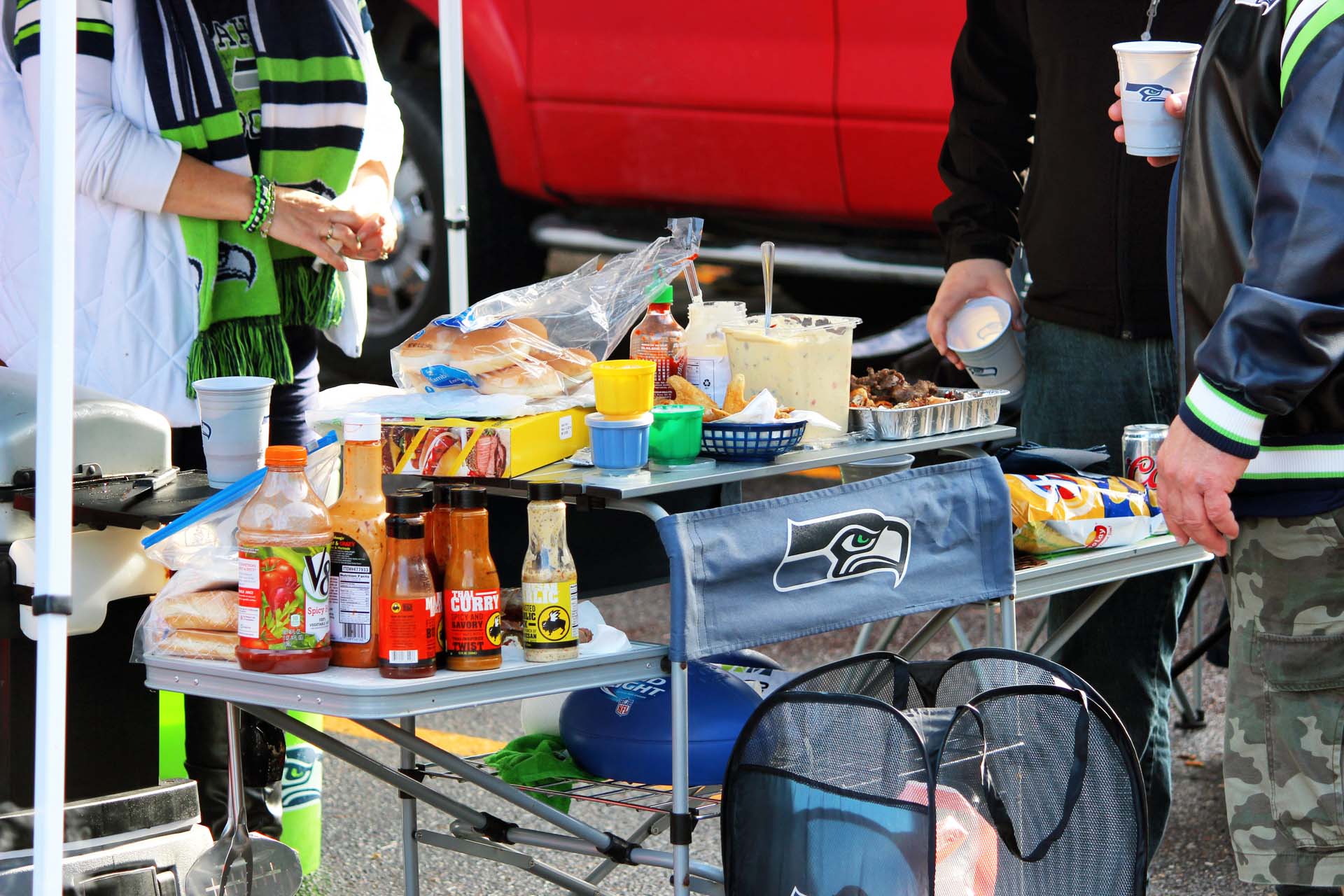 Turns out, while I may know my Buffalo Wings, this was a whole other level, and it was fantastic. I would have asked for half a dozen more, but I didn’t want to push my luck.

Maybe things would have been different if we weren’t wearing jerseys. Maybe if we didn’t have a cooler of our own, or a few bags of chips. Somehow, though, I doubt it. This side of sporting a Giants jersey, I really don’t think anything could have put a damper on the day. Even the game, which, by Seattle standards that year, was pretty tame, seemed just that much more special because we hadn’t just strolled up to the box office and bought tickets minutes before kickoff. I’ve done this before, having witnessed sporting events in venues located in Detroit, Chicago, Boston, Nashville and beyond and while the spectacle is usually good (unless you’re at a mid-January NHL game in Buffalo between the bottom-dwelling Sabres and only slightly higher-dwelling Calgary Flames – yikes), there’s often something missing. Thanks to our tailgating this time ‘round, though, we felt just that much more “as one” with the crowd than we otherwise would have.

Oh, Seattle won, by the way. Can’t remember the score, though.