Big Rigs on the Big (and Small) Screen 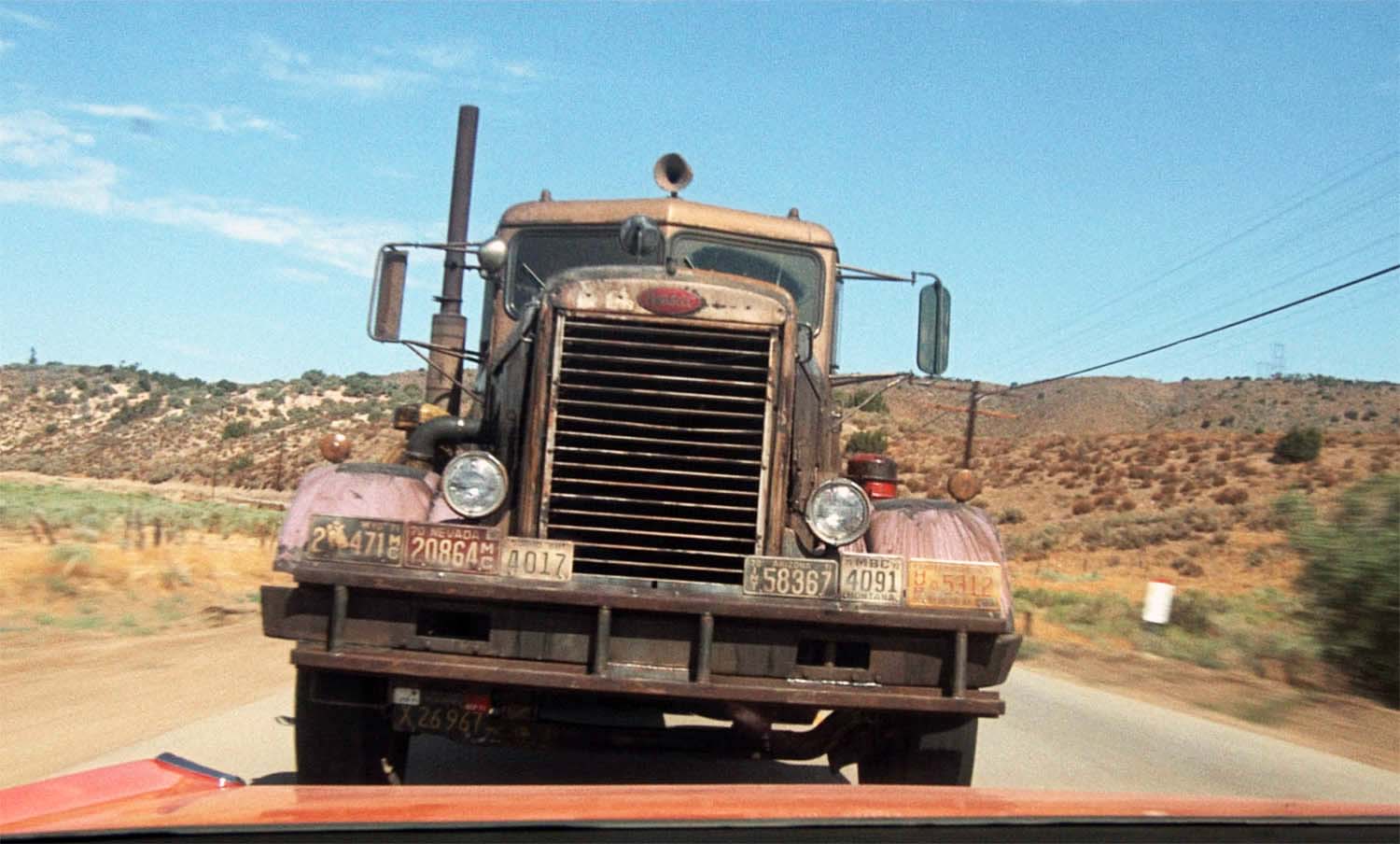 This TV-movie, about an innocent driver being terrorized by a madman behind the wheel of a tanker truck, had a bigger impact on pop culture than anyone could have possibly predicted when it first aired in 1971. First of all, its success won its director, Steven Spielberg, the creative freedom to go on to make Jaws, Raiders of the Lost Ark, E.T. and all the rest of the movies in his great career. Secondly, a few years later, footage from it was re-used in an episode of the Incredible Hulk TV show, which outraged Spielberg and prompted him to lock down the rights to all his work from that point forward, and other directors followed his lead. The 1955 Peterbilt 281 was chosen because it had a “face-like” visage. 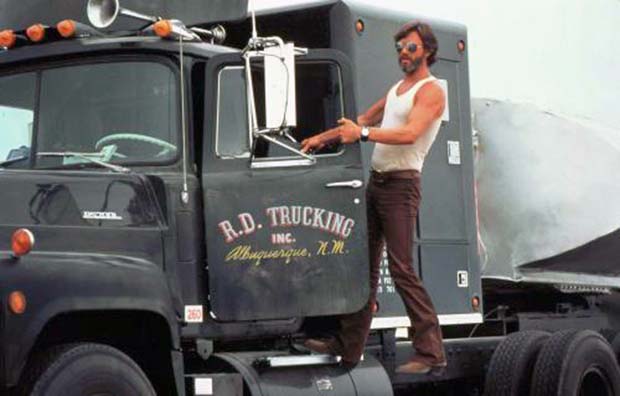 Aided by an incredibly catchy theme song, this film seized pop-culture imagination in 1978. Its main attraction was also it title: the sight of dozens of truckers, led by Kris Kristofferson, rolling down the highway, fighting for their rights against a corrupt sheriff. It's the type of spectacle a teenaged Homer Simpson would have watched in utter wide-eyed rapture. In fact Homer even sings the theme in one Simpsons episode, seen here. 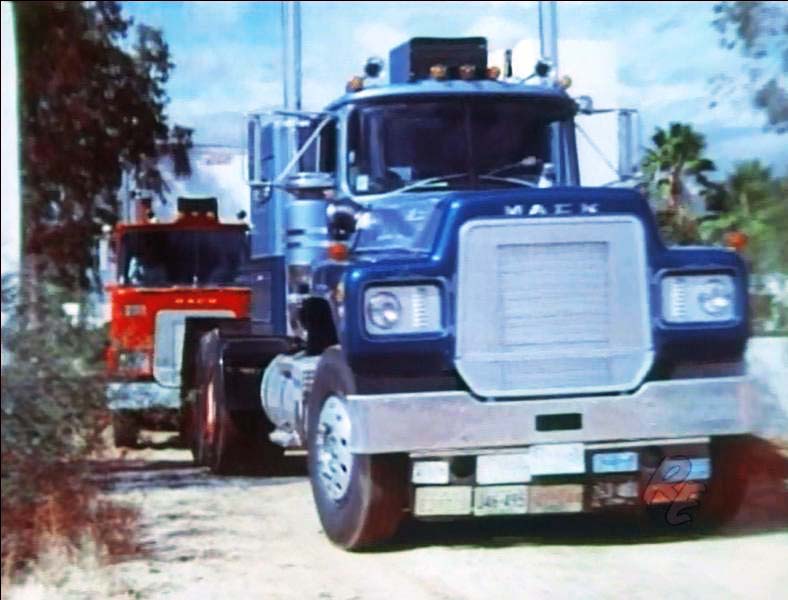 Not one but TWO rigs (both Mack trucks) feature in this 1970 B-movie, which back in the 80s used to show up occasionally on indie TV stations at 2 a.m. It's that kind of film. Now, however, it's available on DVD, so if you've ever dreamed of seeing a pair of truckers try to take down a fugitive Nazi in rural Mexico – it's that kind of film – here's your chance. It's terrible but at least the trucks get a lot of screen time.

They Drive By Night 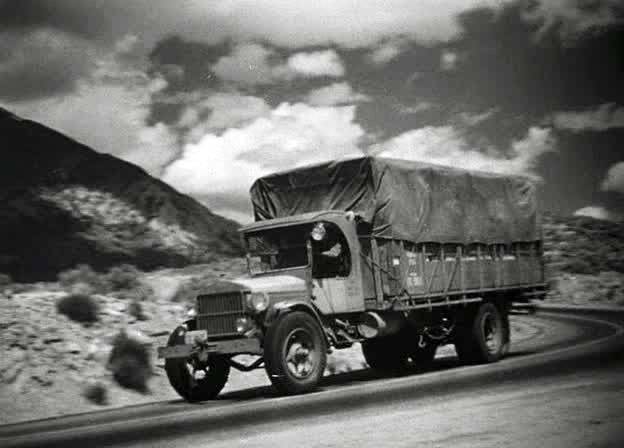 Let's shake things up by including an older movie. This 1940 flick stars Humphrey Bogart, at the dawn of his immortal stardom, and George Raft, in the twilight of his own A-list status, as brothers who have to work incredibly long hours as truckers. Worn down, exhausted and desperate, they run into trouble from the large trucking firms who will stop at nothing to eliminate the competition. Check it out! It's good. By the way, Humphrey and George drive a late '20s model Sterling truck, forerunner of the tractor trailer.

Here's a cheesy but greatly entertaining film for some idle Saturday night. Patrick Swayze plays a dude who's just been released from jail and is keen to rebuild his life on the straight and narrow. In doing so, he's lucky to get a job as a truck driver, but what he doesn't realize is that the trailer is full of illegal arms. Soon a rival gang is on his tail – as are the police. Patrick drives a 1994 Peterbilt 379, in case you were wondering. 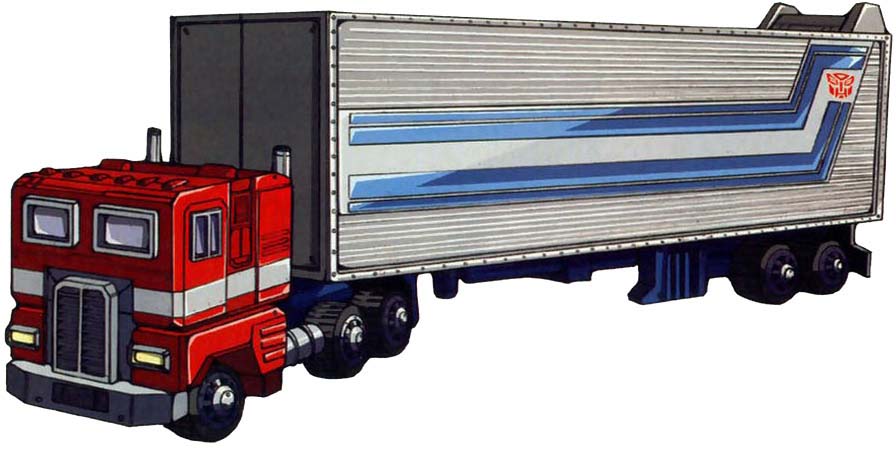 One thing that puzzled 80s kids was, when Optimus Prime transformed from truck into robot, where did his trailer go? It just kind of flew off screen, only to magically reappeared when it was time for him to transform back. Many a playground saw heated arguments over other dimensions and other crackpot theories (these kids are now the business leaders of today, by the way). However, the movies evaded this problem by simply not giving Optimus a trailer at all. Problem solved.

It's the Green Goblin, isn't it? It and it alone elevates this truck from the mundane to the unforgettable. Imagine seeing that in your rear-view mirror! This truck, a 1981 Western Star 4800, is the leader of a group of tractor-trailers that gain sentience, along with every other machine on Earth, which, after much blood and violence, offer to let humans live in exchange for the humans' agreement to pump their gas on demand. It's even weirder than it sounds. This is the only movie Stephen King ever directed. He now hates it, but at the very least he can be proud that it has a spirit all its own.

Smokey and the Bandit 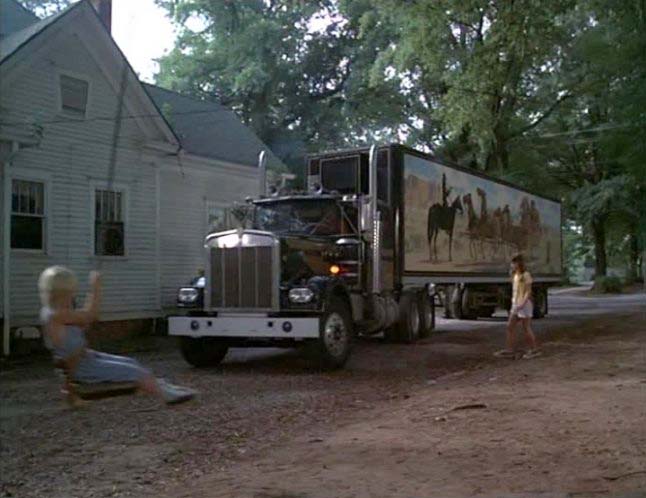 The top-grossing movie of 1977 was the original Star Wars. But coming in second behind Luke and Leia were Smokey and his arch-nemesis, the Bandit. Now, to be fair, Burt Reynolds's Trans Am got all the glory, but Jerry Reed's truck did all the work. In this comedy/action tale, Burt attracted the attention of the police while Jerry used a 1974 Kenworth W-900 to smuggle a trailer full of Coors across state lines (the stakes weren't exactly sky high in this movie). Perhaps the most striking part of the film was the trailer's eye-catching scenic paint job. 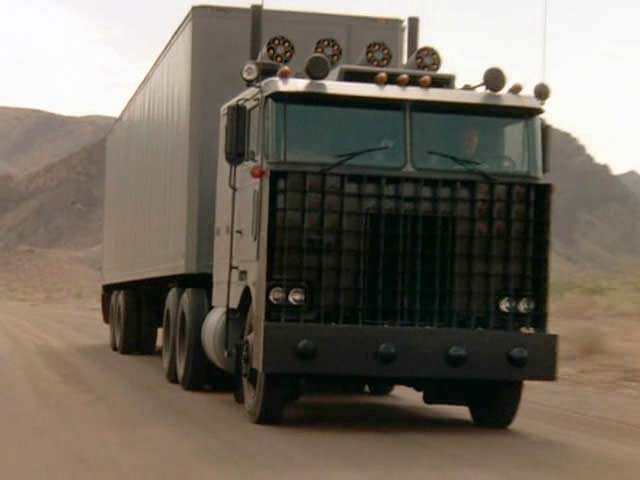 You're the producer of Knight Rider, the tale of a man and his super-car, coming off a smash-hit first season. You have a dilemma? How do you prevent things from going stale in Season 2, but not going too far and losing the spirit that made the show a tremendous success? Here's how: a giant truck. A giant, indestructible truck. A giant, indestructible truck called Goliath, driven by David Hasselhoff in a dual role as his regular character's evil twin, which actually succeeds in smashing the heck out of KITT. If you weren't a 10-year-old boy in 1983, you simply cannot understand how gripping this all was. My heart is racing just remembering it now. 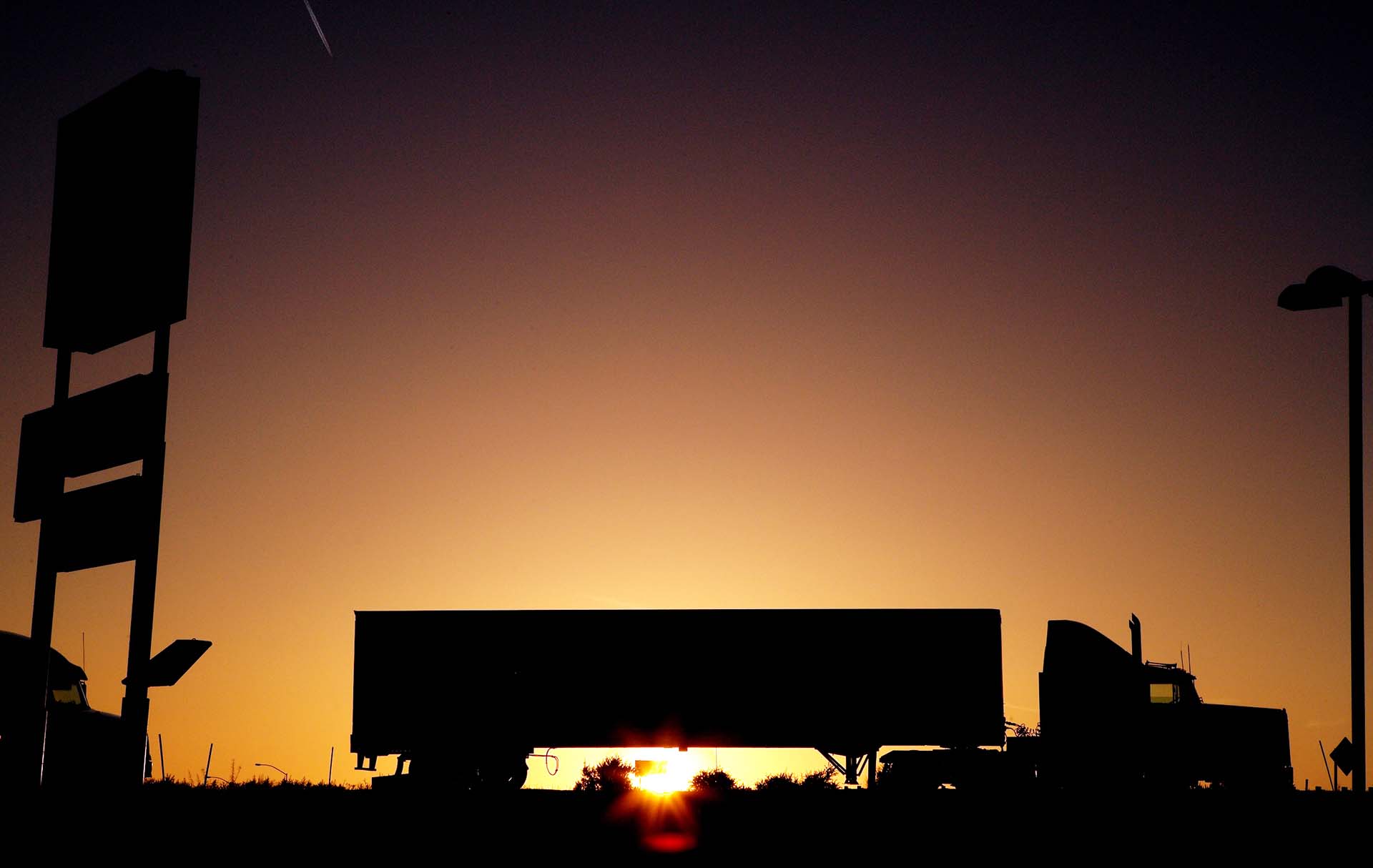 Finally, let's end with a non-fiction movie about rigs. This documentary was filmed in 2007, featuring a host riding in the cab alongside several different long-haul truck drivers, examining life on the road and its effect on the drivers. The film enjoyed success at some film festivals and is well worth searching out for an intimate look at this profession.

Editor’s Pick: Over the Top

But wait! There’s more! How can we leave without mentioning the epic 1987 flick Over the Top. In it, Sylvester Stallone plays a truck-driving, arm-wrestling, baseball-cap–turning dad fighting for his son, and a really expensive new truck. For most of the movie Stallone drives a 1965 Autocar A64B, but the grand prize on offer is a custom Volvo worth $250,000 (or about $6 billion in modern money).

No way we could let this slide without referring the two trucks central to the storylines of both The Road Warrior and Fury Road. What are the original trucks? Who cares?! The fact is the movie trucks were beyond awesome, not to mention frightening. These are undoubtedly the coolest trucks of the big screen, ever. 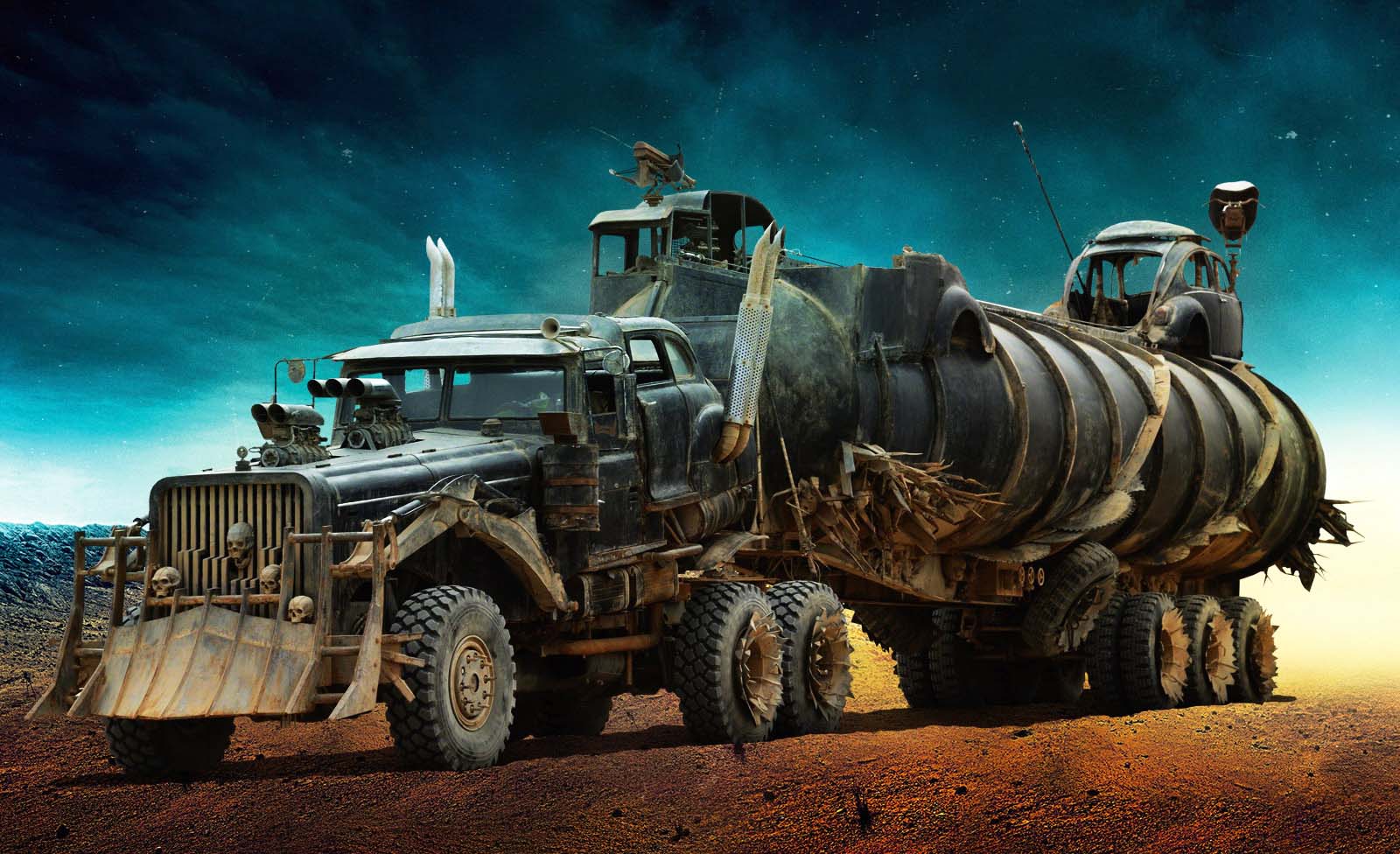