What the Grammy Nominees Drive The rides of music's biggest stars.

One of the great things about the Grammys, taking place this year on Feb. 15, is the wide range of nominees, and any viewer with an open mind can discover a new favourite. There are young artists and old artists, and there are rappers, rockers and country stars. Yet be it rap, rock, bubble-gum pop or something really obscure, there's one thing that all nominees have in common: cars. When you're rich, and especially if you're young as well, nice cars are always at the top of the shopping list. Here are a few of this year's nominees and the rides for which they are famous: 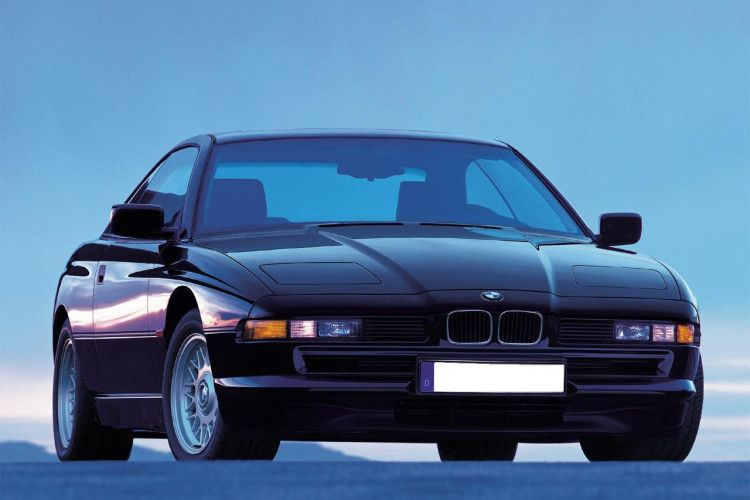 Okay, he's not a nominee, but the man once known as James Smith is hosting for the fifth straight year. Of course, if you're over 25, you know him best as a music superstar in his own right. Back in the 80s and early 90s, he splashed out on 10 or 12 cars, including BMWs, Porsches and Mercedes Benzes. The 1990 BMW 850i in the photo above featured in his Pink Cookies video clip. Fortunately, after blowing through a ton of dough on a fleet of cars which, let's face it, he could never make use of, he was able to avoid financial disaster by transforming himself into a successful actor. 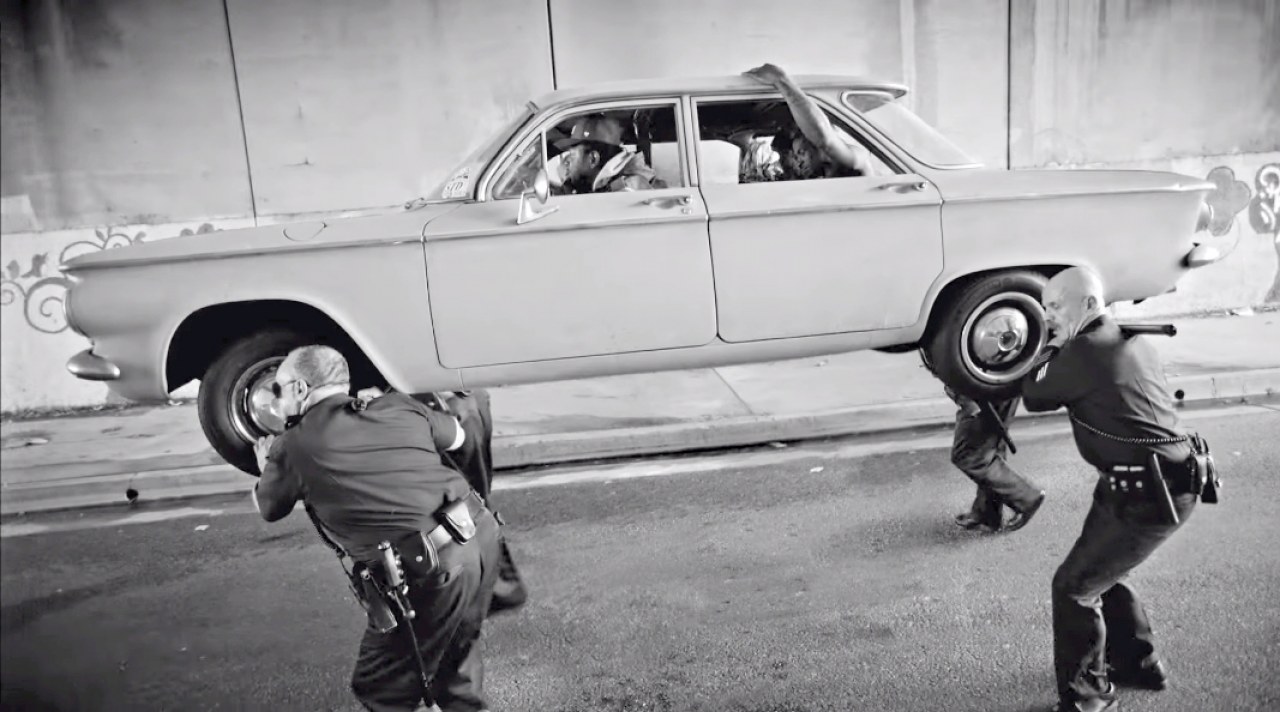 Kendrick Lamar leads all nominees with 11 possible awards, including Album of the Year, but rather surprisingly shies away from Ferraris or Lamborghinis like a lot of his contemporaries. Instead, the Compton native's tastes run to classic Cadillacs, models of which feature in several of his videos. It's also a model with a personal link: as a teen, he learned to drive in his father's Caddy. In the critically acclaimed video for “Alright”, Lamar is carried in an early Chevrolet Corvair sedan by police. (Top Dawg Records) 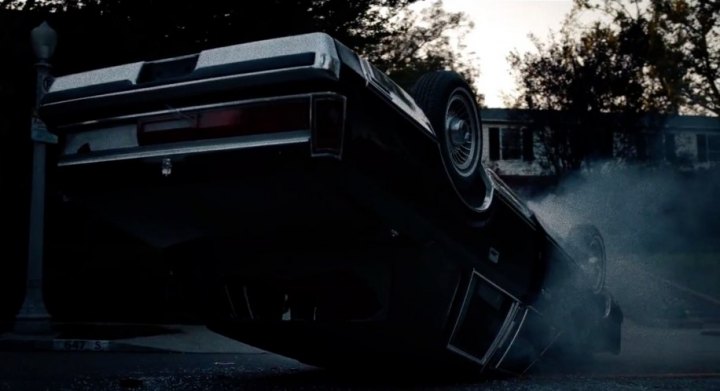 Canada's own The Weeknd is nominated for seven awards, tied with Taylor Swift for second-most, but this link with a car isn't so nice. The video for his hit "The Hills" features a 1985 Lincoln Town Car getting totalled. It's kind of sad to think this car survived three decades of wear and tear just to wind up on its back for a music video, but such sometimes is life. 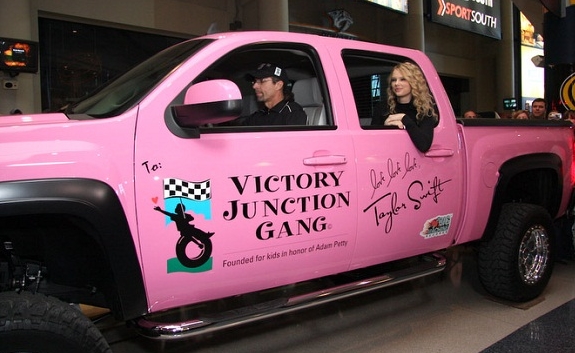 The perennial nominee now drives an Audi R8 in her personal life, but her most notable vehicle has to still be this Chevy Silverado, which her record company gave to her on her 18th birthday. It's notable, of course, for its bright-pink paint scheme. You have to think there aren't too many Silverados rolling down the highway sporting that hue. In fact you have to think there aren't any others at all. 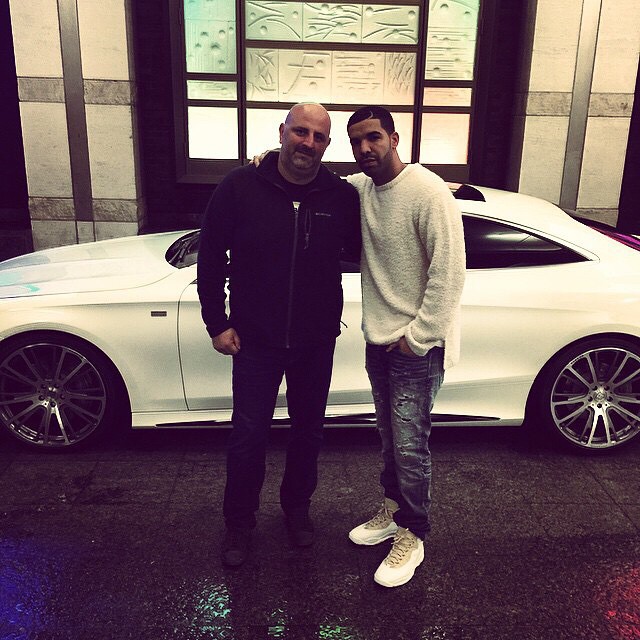 Drake is another Canadian star with multiple nominations, including two in the category for "Best Rap Performance." Besides using his wealth and fame to sit courtside at Raptors games and drumming up attention for "the Six," Drake also parlayed his notoriety into becoming the first North American owner of a Brabus S-Class Coupe Bi-turbo. 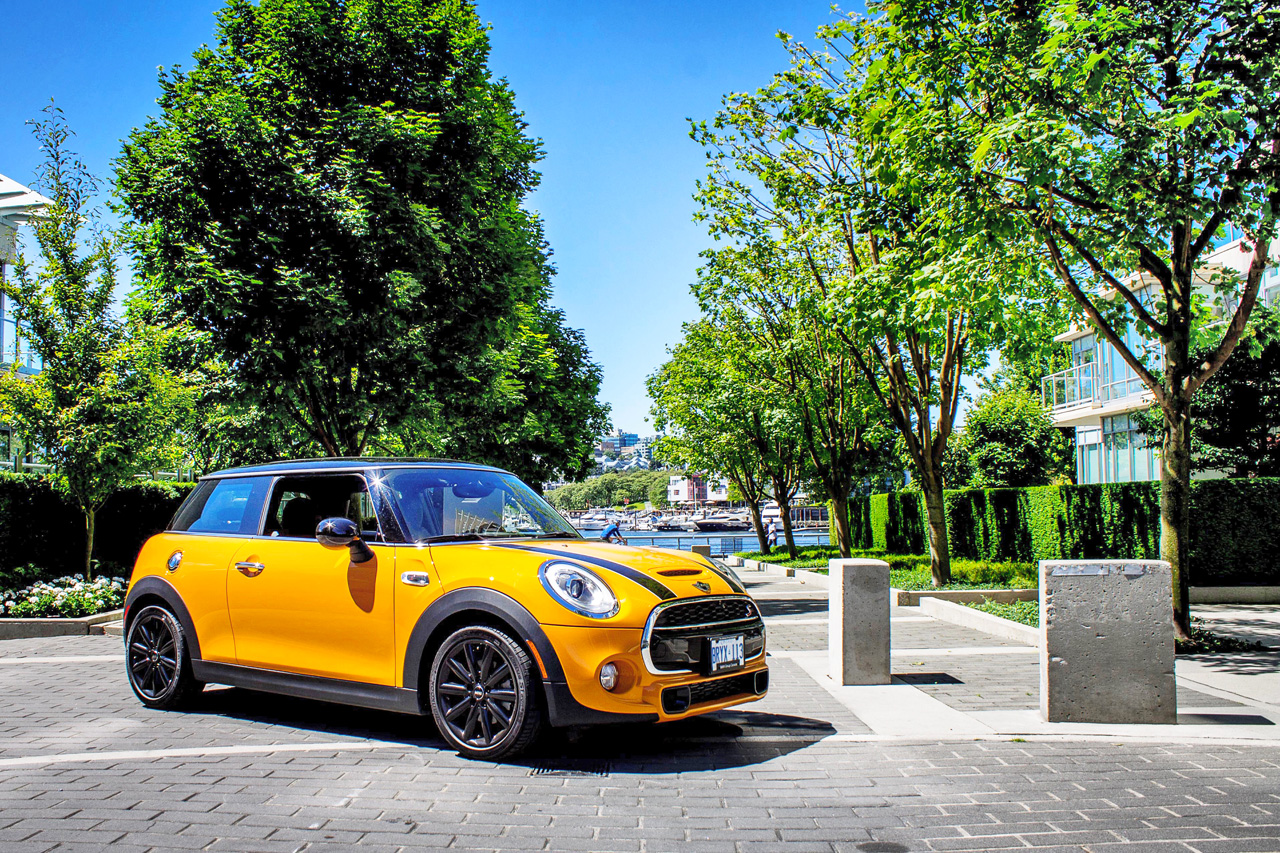 The English star just wouldn't look right zipping down the road in a Lamborghini Aventador, you know? And that's not an insult. In every interview he comes across so down-to-Earth that it's impossible to picture him showing off in a super sportscar. Apparently, he feels the same way. In summer 2015, Sheeran finally bought the first car he has ever owned: a humble but proud Mini Cooper. Oddly, and equally in keeping with his personality, Sheeran can't actually drive it yet: he's never bothered to get his driver’s licence! 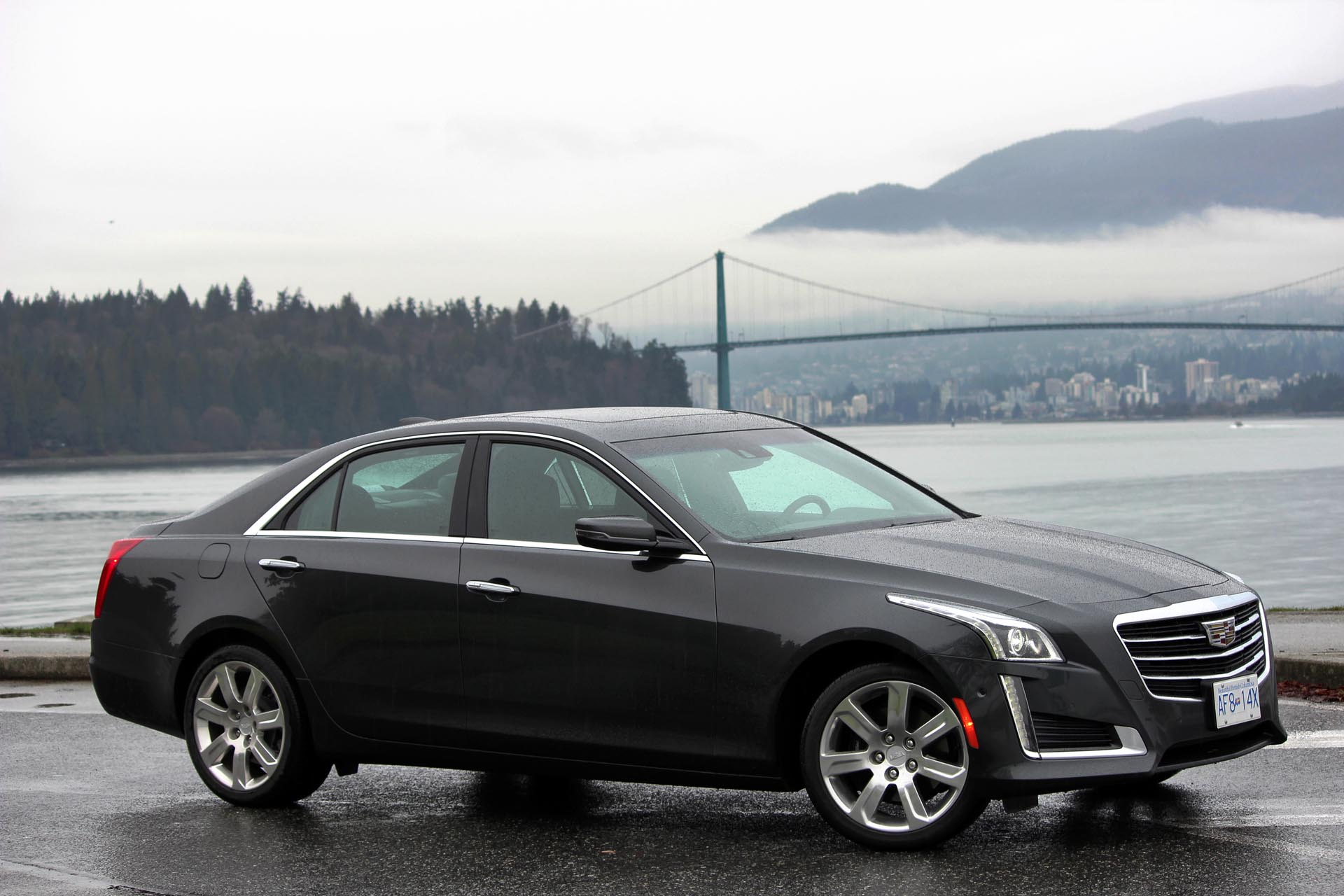 Will "Uptown Funk" win for Record of the Year? Well, it's got a good shot. That song was everywhere this summer, and it's "Uptown Funk You Up" segment proved to be incredibly catchy. However it's up against stiff competition, including The Weekend's "Can't Feel My Face." Either way, win or lose, Bruno is set. He can celebrate a win by buying a new black Cadillac, or he can pick himself up after a loss by buying a new black Cadillac. Because, you see, it turns out the dude loves black Cadillacs – curiously, his CTS is just a regular six-cylinder model. 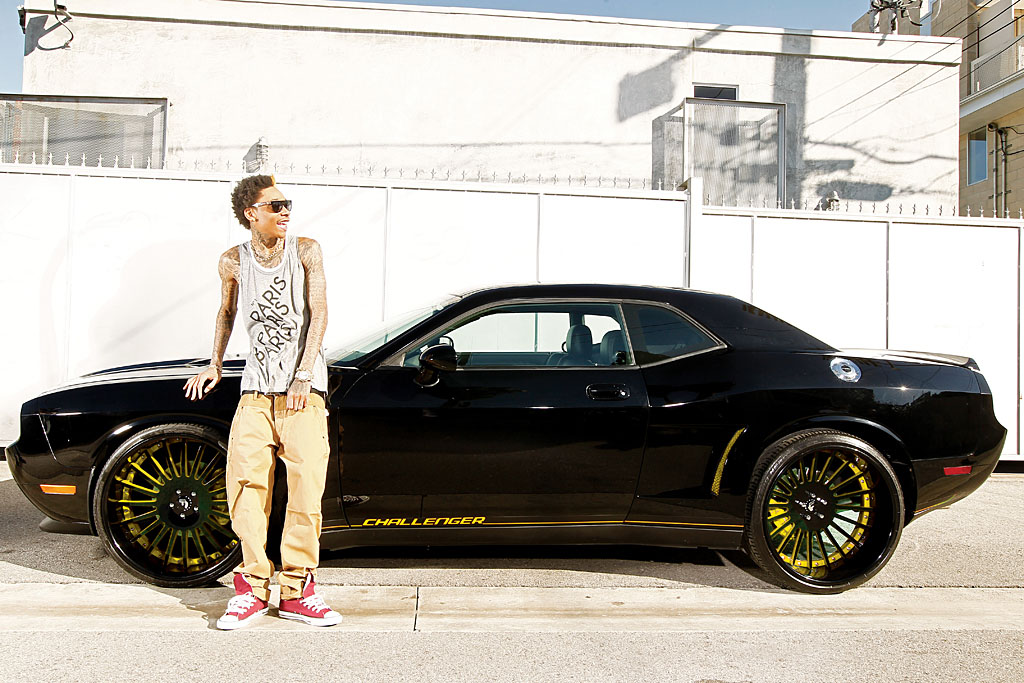 Pop quiz: How is Sidney Crosby connected to this photo? Take a close look ... you have to make a deductive leap here ... Okay. Wiz's Challenger SRT-8 features an eye-catching black and yellow paint scheme, in tribute to his hit song called, well, "Black and Yellow." This in turn is a tribute to the colour schemes of the pro sports teams in Wiz's home town of Pittsburgh, namely, the Steelers, the Pirates, and the Penguins. So THAT'S how Sidney Crosby is connected to this photo. 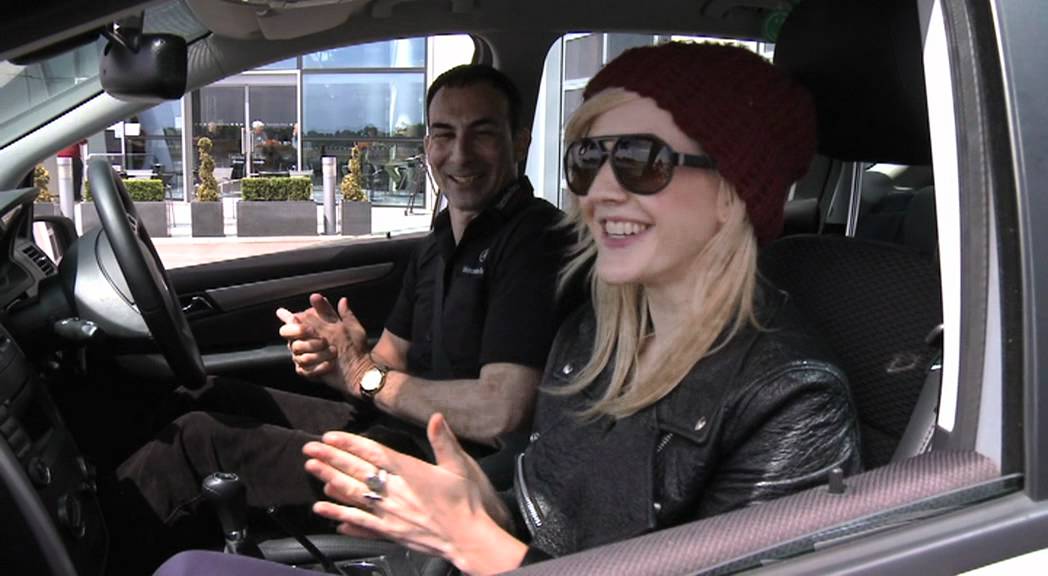 The young star is up for two awards, both for her song "Love Me Like You Do." In addition, she will also be one of the performers at the ceremony – care to guess which song she'll sing? In her young life Goulding hasn't had much chance to drive, so a few years ago Mercedes-Benz arranged for her to do a test drive on their course. It must be amazing to have companies race to give you opportunities denied to almost everyone else. 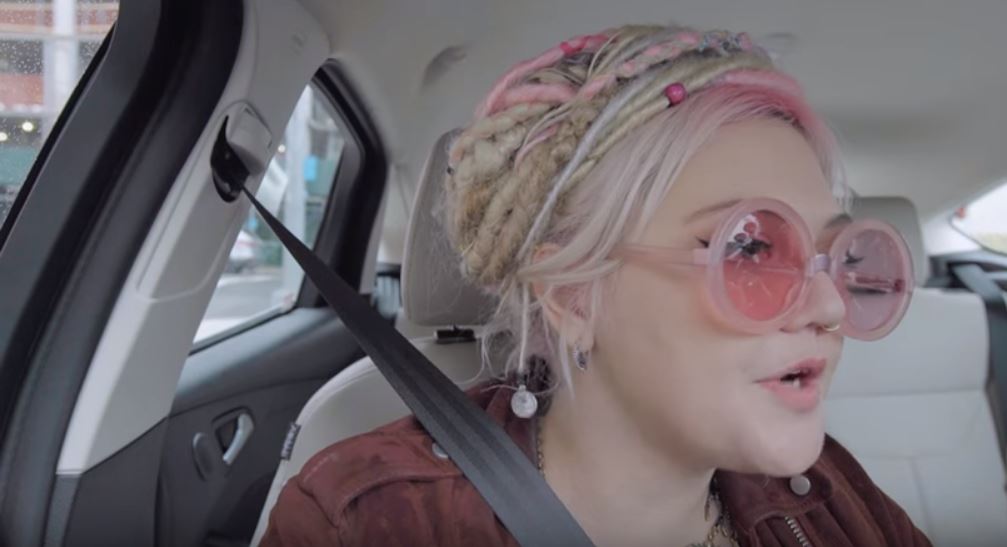 "I personally close my eyes when I drive," the Exs and Ohs songstress declares at the start of this commercial. She's joking, of course. (Or is she?) You'd expect a good sense of humour from Rob Schneider's daughter. This is a giant ad King filmed recently with fellow pop star Betty Who, as they drove around in a Ford Focus discussing life and women's issues. It's an ad, which would usually mean it's not worth watching, but this one has some substance. As ads go Elle and Betty sustain a pretty weighty, interesting conversation. 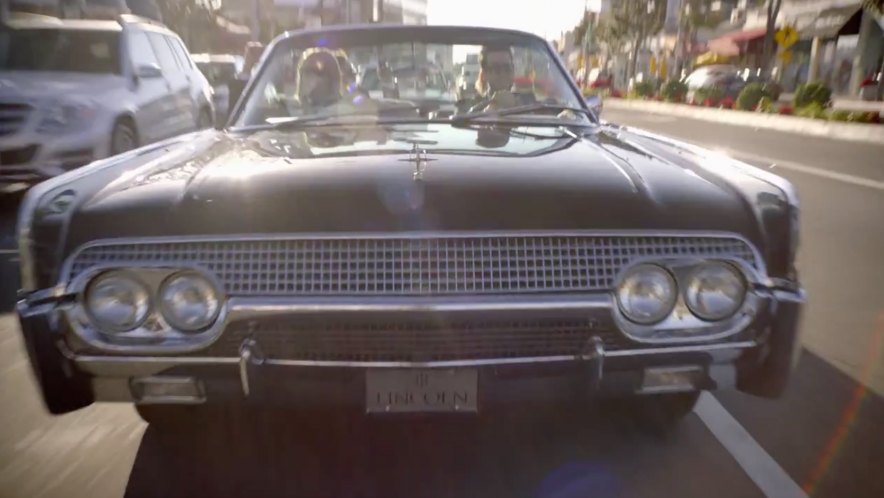 I don't know about you but I for one am sick to death of "Sugar," Maroon 5's tribute to crashing strangers' weddings, or something, which was inescapable this year. If it came on the car radio, and you switched stations, chances were high it'd already be playing on that new station too! Your only option was to turn the radio off and be alone with your own thoughts, and no one wants that. The only cool thing left about the song is the car they drive in the video, which a 1961 Lincoln Continental Convertible. Just watch with the sound off. 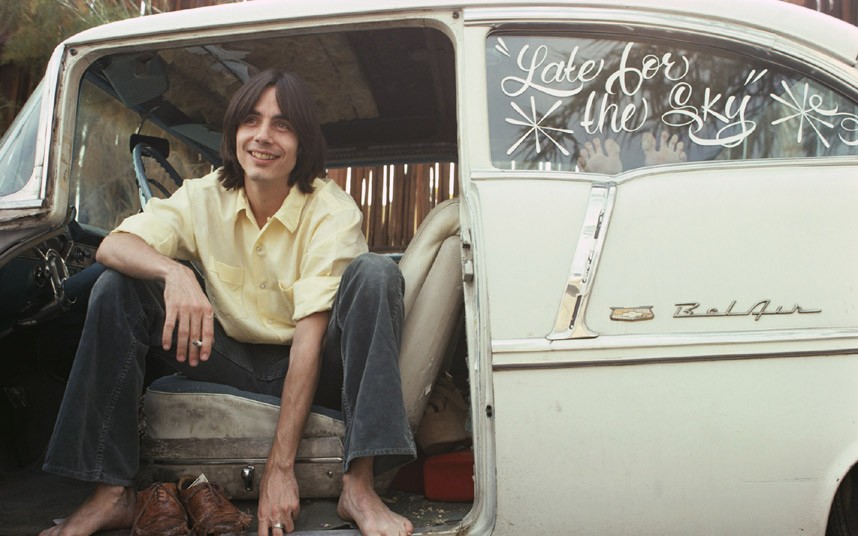 Winner of six Grammys, Taylor won his first all the way back in 1971, which is before most of the other nominees were born, by several decades in some cases. Taylor is up again this year in the "Best Pop Vocal Album" category. He's had a good, long career, and one of the more special possessions of his life dates from the early 70s. This old 57 Chevy, which was a gift to him from Glen Frey of the Eagles. 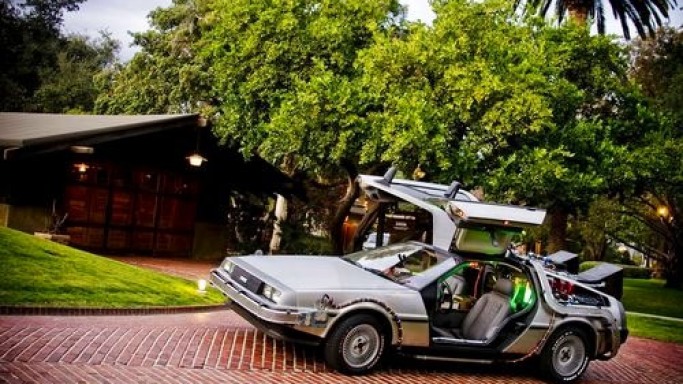 MacFarlane is best known as the creator and voice artist behind Family Guy, but when he isn't corrupting today's youth he's recording Sinatra-like jazz albums (I know Sinatra didn't sing jazz, but please play along…). This year, his album "No One Ever Tells You" is nominated for "Best Traditional Pop Vocal Album." Recording this album was truly a labour of love, because he sure doesn't need the money. He already owns a black convertible Maserati and, to prove his status as a true child of the 80s, a DeLorean from Back to the Future. 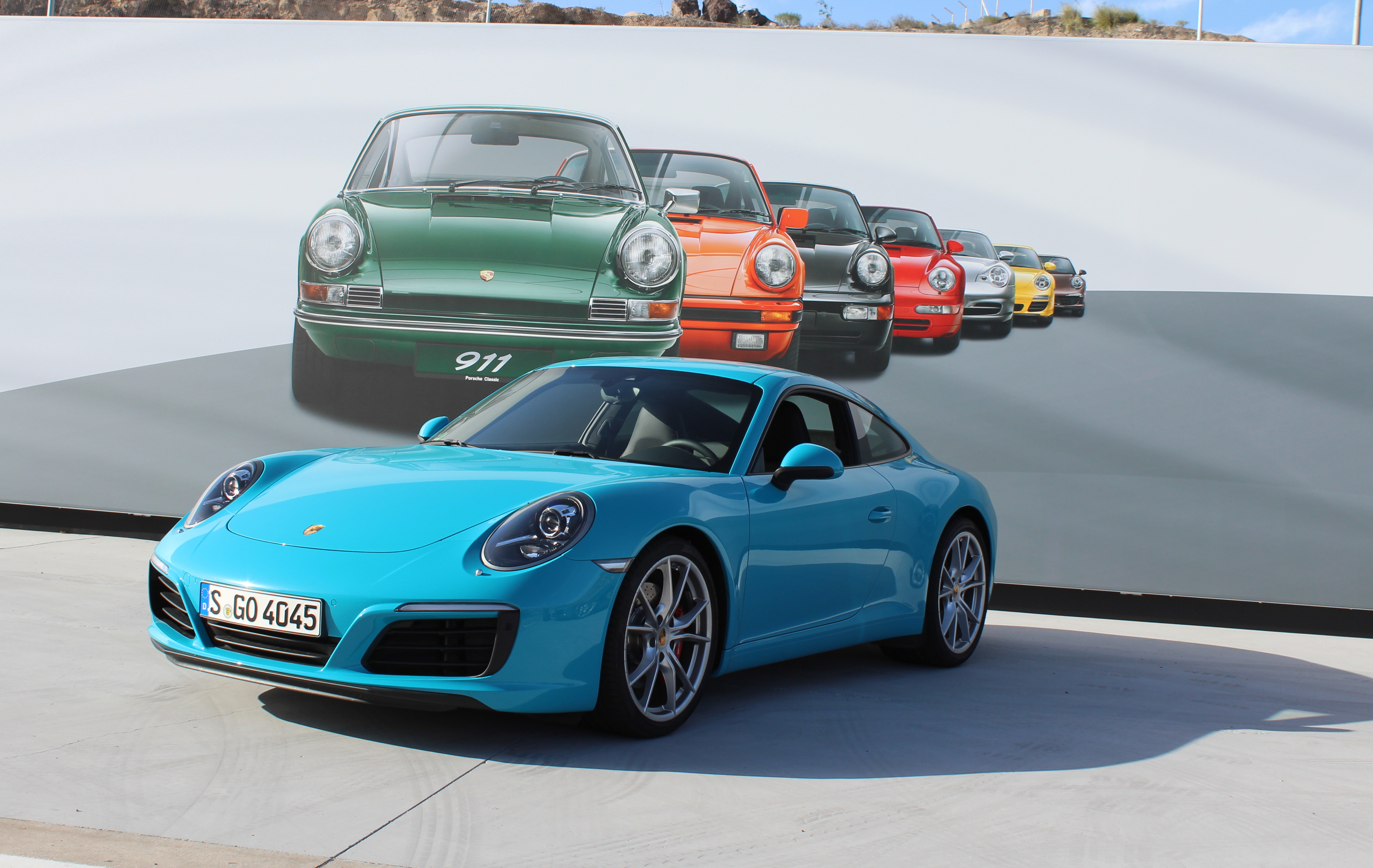 After 15 years of top-tier success, previous Grammy winner Groban is up for "Best Traditional Pop Vocal Album" this year. After all this time, he knows what makes him happy, and he knows how to keep it (relatively) simple. A few years ago, he bought a Porsche Carrera 911 like the one above. But only one. 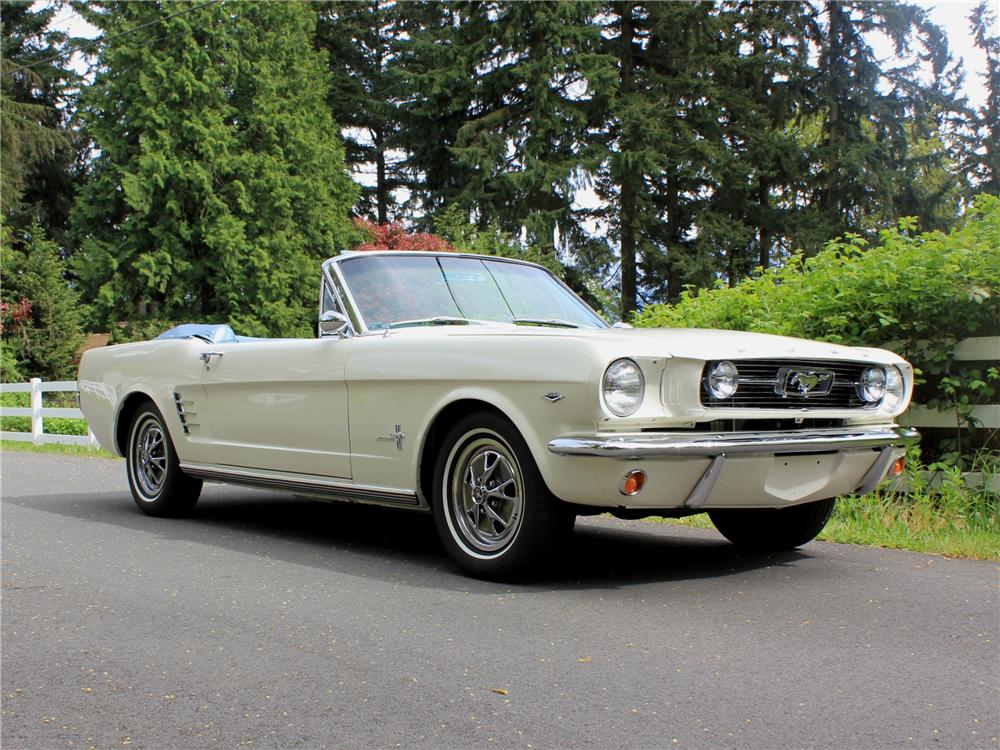 Is Dylan the greatest songwriter/lyricist of all time? Of the rock era at least? Maybe, maybe not, but there's no questioning his genius. His latest album, "Shadows in the Night," is up for Best Traditional Pop Vocal Album. Dylan, like James Taylor, has had many adventures in his career, including one featuring the first car he ever bought: a 1966 Ford Mustang convertible. Unfortunately, shortly after, a friend of his rolled it down a hill. No one was hurt but the car was totalled. Dylan says he sold the wreck for $25. What would that car be worth today? 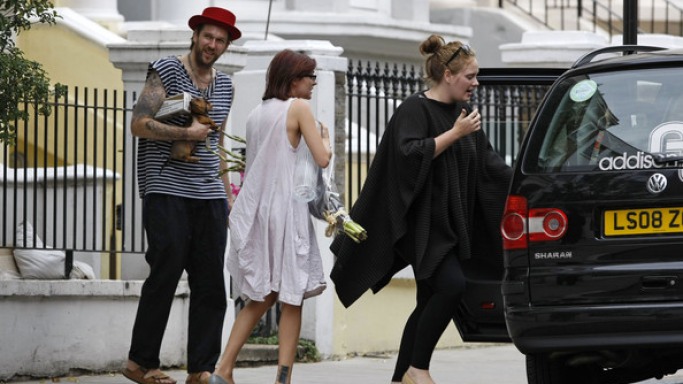 One of this year's performers, Adele is not actually nominated for anything this year, as her recent smash hit Hello was released after the October 2015 cut-off date. (You can be sure she'll be nominated several times over next year.) When she's at home in London, Adele drives around in a Volkswagen Sharan, which has a top speed of 121 mph. Somehow I just can't see her ever burying the needle though, can you? 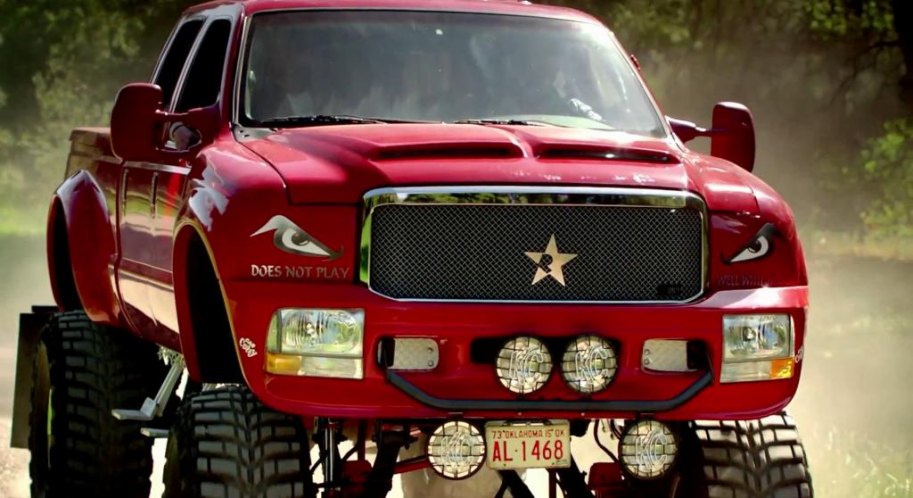 The country superstar is up for just one award, for his song "Lonely Tonight." One of the more memorable vehicles in his life is this 1999 Ford F-250 Super Duty, which featured in one of his videos a few years back. Sure, it's from a video, so you can't conclude he drives one in real life, but I bet he's got something like it. Do you think this dude's driving around in a Prius? 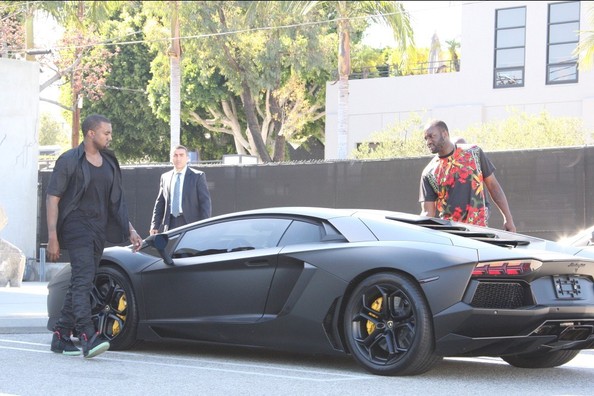 It comes as no surprise that Kanye West, king of a $145-million fortune (not including his wife's contribution), splurges on a fleet of high-end automobiles. On his website, he has often posted photos of his treasures, including an Aston Martin, a Lamborghini Murcielago and a Lamborghini Aventador. This year, West is nominated for a handful of awards, including Best Rap Performance for "All Day."