Some tips on driving one of the lightest cars on the road, in the dead of winter.
Advertisement

Some tips on driving one of the lightest cars on the road, in the dead of winter.

Mazda’s latest MX-5 is lighter, friskier and just as rear-wheel drive as ever, and though more shoppers than ever want convertibles they can use all year round, many Canadians would still see their copy of the latest Mazda roadster stored through the winter months, tucked away in a warm garage, and not out tearing up the roads, the way it was designed to.
When it comes to return on your investment of a new sports car, shoving that sports car into the garage for half the year just doesn’t add up. And though the 2016 Mazda MX-5 is light and slim, it turns out there’s little need to pull it off of the road once the cold weather hits. For a driving enthusiast brushed up on basic car control strategies, and willing to be active in their motoring, it’s a competent winter performer.

Will you be one of the thousands of Canadian shoppers seeking out a new convertible that’s suitable for year-round use? Are you planning to operate your new MX-5 in the dead of winter, on roads greasier than a triple-bacon supreme from Jean Guy’s Poutine Palace?

Here’s what you’ve got to know. 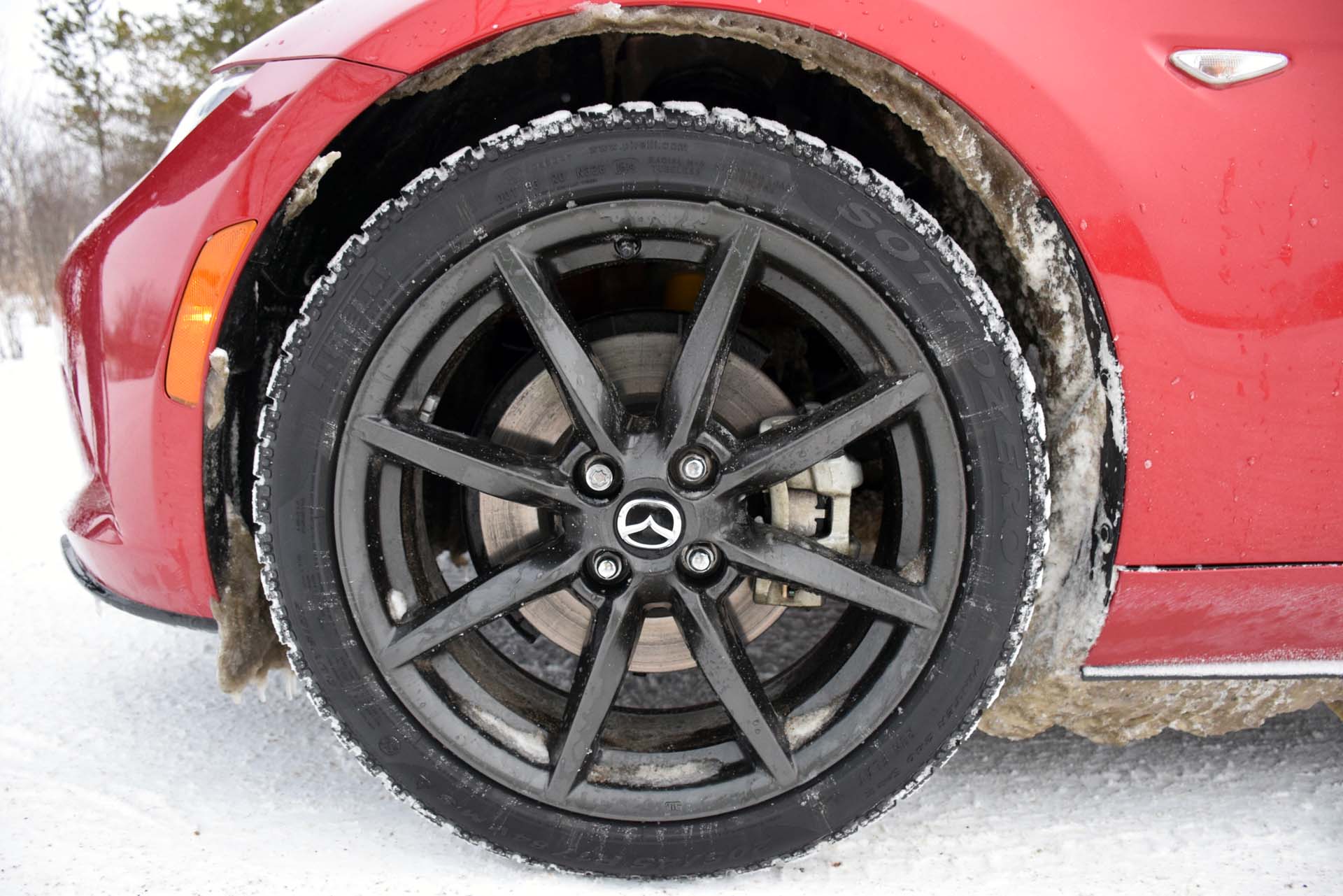 Winter Tires On: The MX-5’s factory-kit summer-tires could amount to suicide when used in the cold and snow, so plan to spend a few extra bucks for a set of quality winter tires. The tester’s Pirelli Sottozero winter boots impressed all around, and especially with abundant off-the-line traction, even on polished, hard-packed surfaces, and ice. With winter tires on board, MX-5’s array of traction-enhancing hardware and other systems had more grip to work with. Winter tires are the foundation for winter survival in this car, so don’t skip them.

Hill Launch Assist: By ‘freezing’ the pressure in the brake lines for a moment when drivers release the brakes on a hill, the MX-5 is kept from rolling backwards as the throttle is applied, making it easier to get moving again on a slippery uphill surface.

Though your writer experienced virtually no issues with off-the-line traction, getting the MX-5 moving from a stop, on a hill, in deep snow or on ice, can be challenging. Drivers are advised to brush up on their timing, slowing well before an upcoming uphill stop, and keeping a little momentum at play, so it’s easier to keep moving when the way is clear. If you’ll need to stop, try to do so while leaving one or both rear wheels on a higher traction surface, perhaps a patch of sand or exposed pavement, if possible. 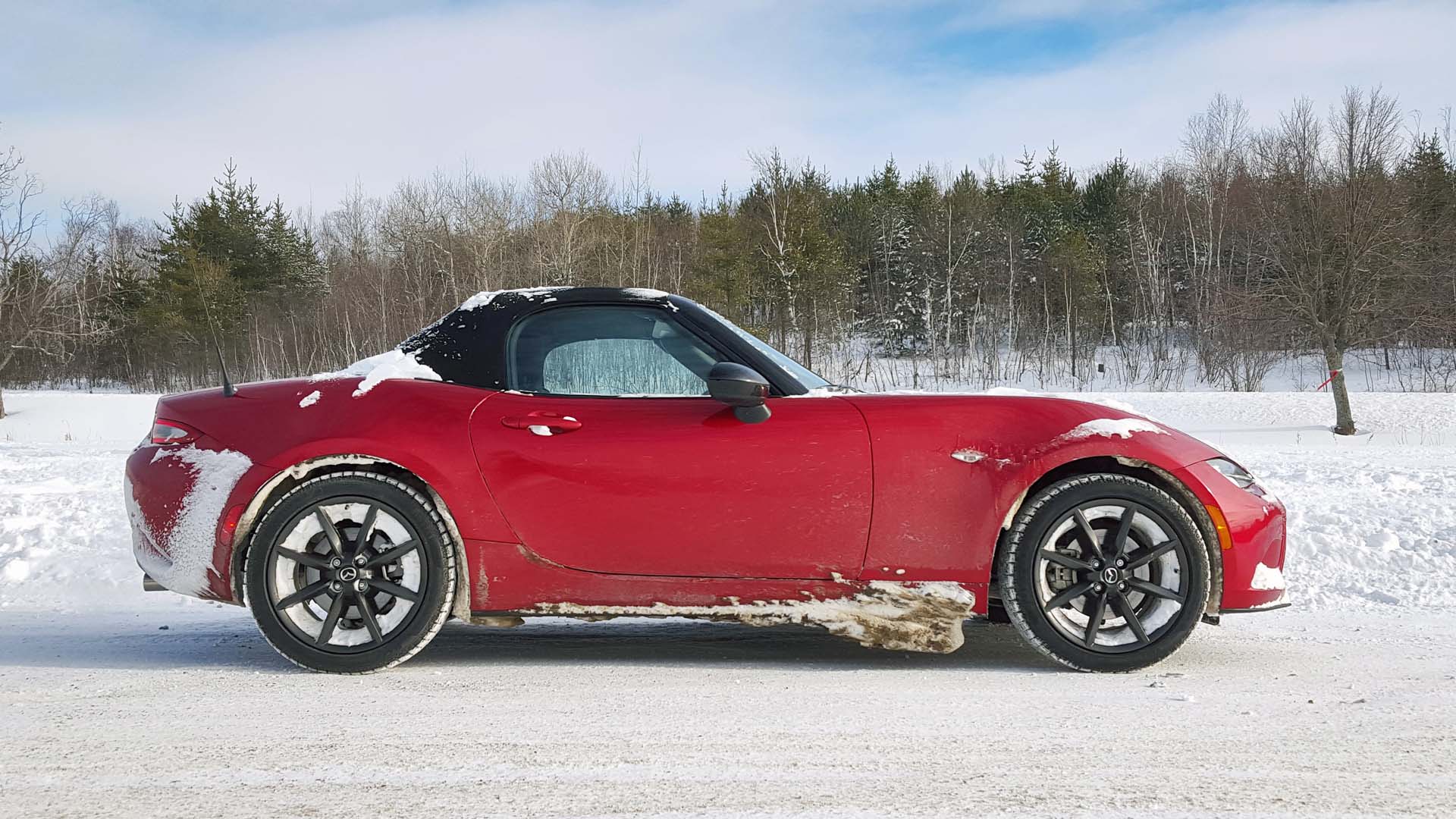 Get the Limited Slip Differential (LSD): The MX-5’s available compact, torque-sensing Limited Slip Differential (LSD) should be considered nearly as mandatory as winter tires for use in the winter. On dry pavement or a track surface, the LSD keeps both rear wheels spinning in near-sync, helping put down more power for off-the-line launches and powering out of a corner. Benefits include more predictable handling and easier access to the MX-5’s high-speed handling limits.

In winter, the benefits are numerous, too. Forget one-wheel-peel take-offs, as the LSD makes it all but impossible for the MX-5 to spin a single rear wheel, as a spinning rear wheel effectively glues the rear wheels together in milliseconds.

How does an LSD work? When a single driveshaft spins excessively, mechanical friction is applied within the differential, slowing the spinning driveshaft and instantly transmitting the excess of torque to the driveshaft, and wheel, with more grip. Translation? Both rear wheels participate in getting the MX-5 moving, every time. Even with one wheel on ice and the other on pavement, you’ll still achieve forward momentum in quick order. Powering through deep snow, all engine power goes towards maintaining forward momentum, rather than wastefully spinning a single rear wheel.

With the LSD on board, expect maximum confidence from the lightweight roadster, even in the most challenging conditions. You’ll find the LSD as standard on the mid-grade MX-5 GS and top-line MX-5 GT. 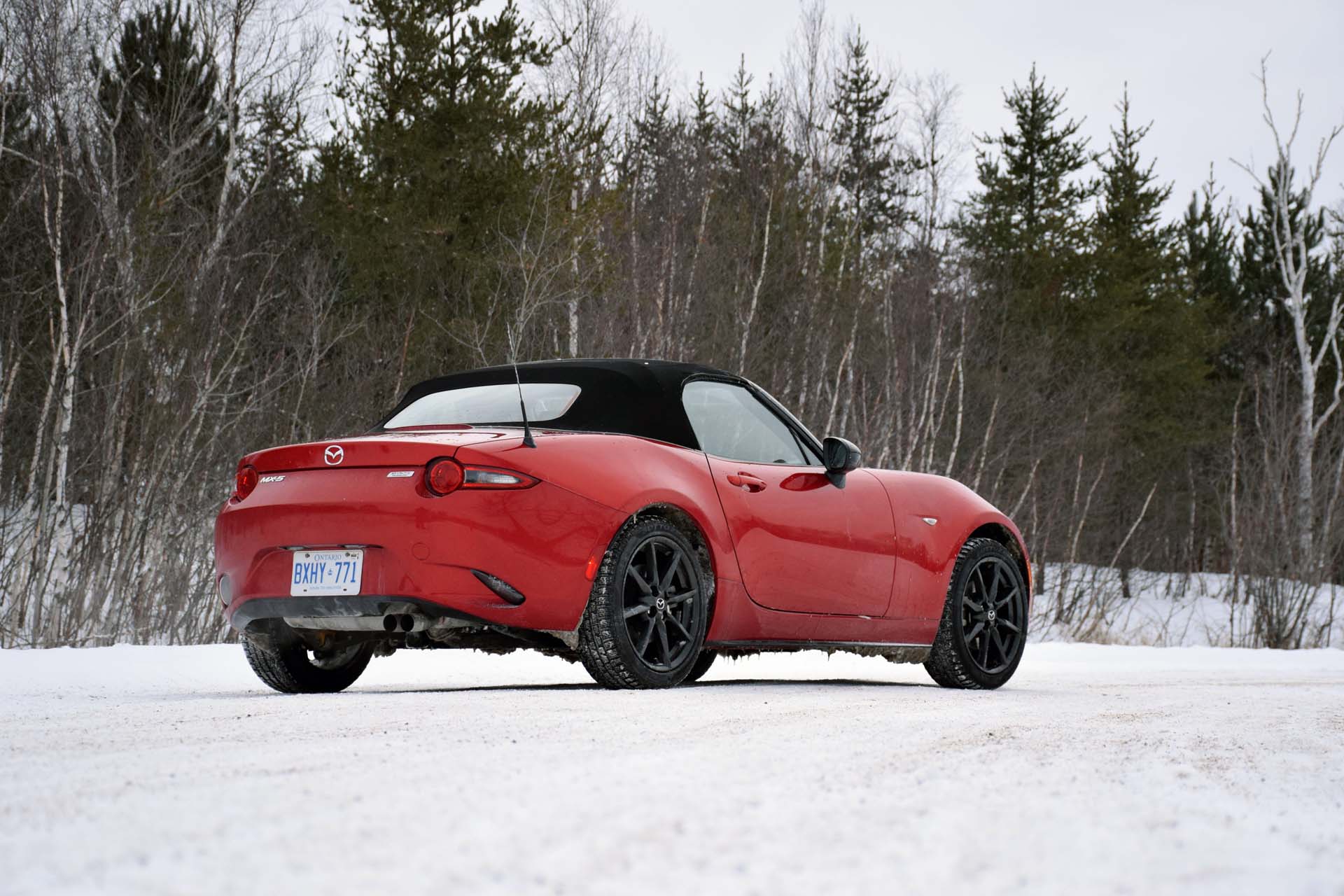 Not Afraid of the Cold: Though the MX-5 loses heat from its engine and cabin in quick order when parked for a few minutes, the powerful heater outputs hot air much faster than it can leak past the soft-top material, even without the heater maxed. At 25 degrees below, wearing a moderate winter coat and toque, I was toasty warm, with the blower fan at about 60 percent.

Further, and without plugging in, the tester consistently achieved ignition with minimal hesitation at 30 below, on three separate mornings. Only a touch of extra vibration from the engine room was apparent for the first few seconds of idling. Even without a block heater, she starts like a champ in temperatures that make most humans hide under a Snuggie with a Cup-a-Soup.

Go Topless: Provided its clear of ice and snow, the MX-5’s manual soft top can be dispatched in about three seconds with a simple pull of a latch, and shove of the roof assembly back into its storage space, were it latches down and locks into place. Though the climate control system no longer offers a selection of ‘top down’ ventilation settings, the potent heater and an aerodynamic bubble of warm air trapped into the car help keep occupants warm, even well below zero. You’ll get funny looks from other motorists, though provided you’re moving, a surprisingly large amount of heat stays inside of the cabin, with the roof down.

Respect the Weight: The MX-5 comes in some 68 kg lighter than even the extra-light, last-generation car. As such, driven on slippery highways, drivers are advised to be absolutely certain they’re sharp, brushed up on car control basics, and smooth with their manual shifting, which can upset the balance of the car if the clutch is operated carelessly. The MX-5 is balanced at 50:50 between the axles – meaning it’s not prone to oversteer or understeer, or lighter at one end than the other.

Still, minimal weight applied to slippery roads see the MX-5 turn in a very active drive. The stability control system tightens up its tolerance for slips and slides at higher speeds, though this is a car that demands drivers work with it for maximum stability on slippery roads. Slight twitches and squirms as varying surfaces pass beneath can cause nervousness at first, though directional stability ultimately shines through. With proper winter tires and a competent driver, this one’s just fine in the snow.