Over the past few years tattoos have skyrocketed in popularity -- there are parlours all over the city and it seems like you're in the minority if you don't have at least a little Snoopy somewhere on your body. Cars are a common choice of the inked, behind only perhaps to names of family members and roses. Some car tattoos are subtle, some are showy, some will move your emotions, some will move you to think "What the heck was this person thinking?" Here's a short collection of a variety of automotive-themed ink... 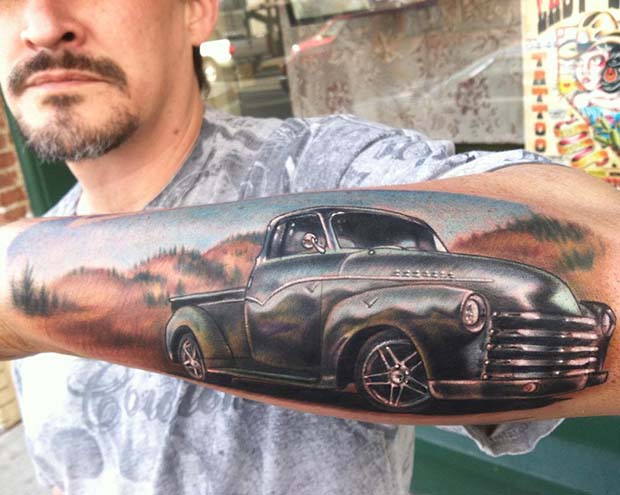 Far and away the most popular location for a car tattoo is the forearm. The shape and length from elbow to wrist is just perfect to display a car. Heck, Popeye could fit a life-sized car on his arm. We could fill a massive gallery with cool cars on forearms, but instead, let's continue with looks at different concepts on different body parts. 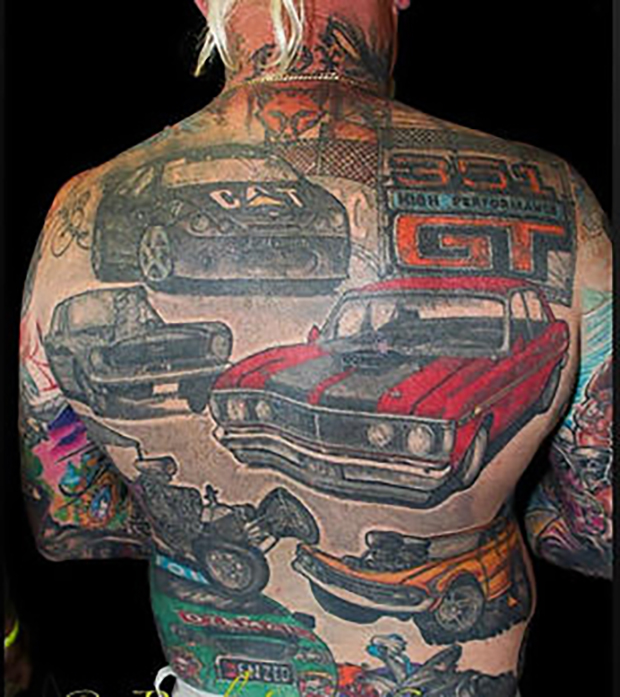 Here's a guy who loves cars so much he's inked himself into a corner. His back is only so big and now he's run out of room. It's a reminder that unless you're seven-foot-six with several acres of skin, choose carefully. 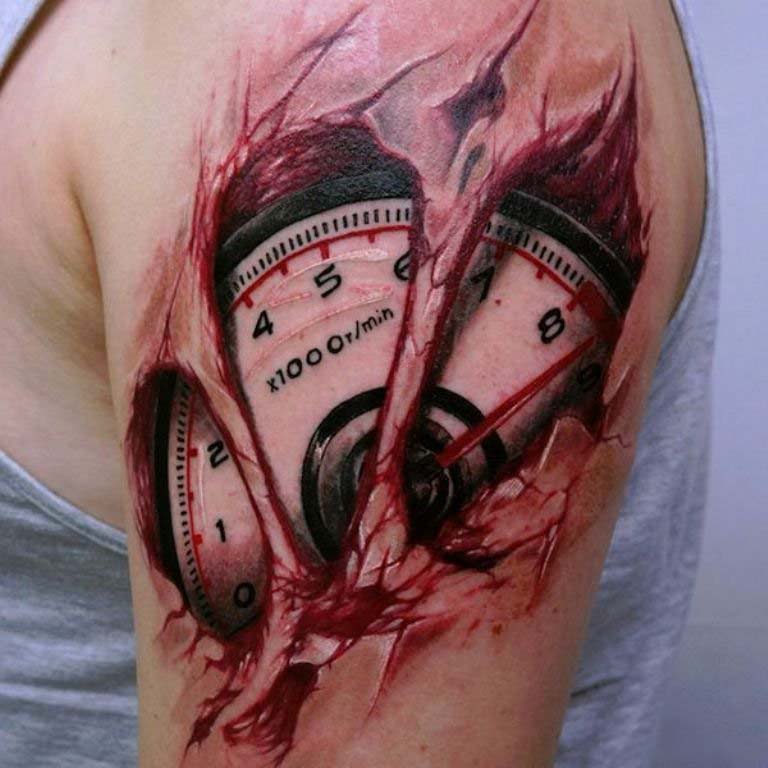 One of the more clever tattoo concepts to come along in recent years is the fake X-ray, purporting to reveal someone's muscles and bones or, more amusingly, robotic cyborg parts. Here, however, is an odd one. This guy has chosen to make it look like his skin has been ripped away, revealing a hidden tachometer. The question is, why you would measure rpm in your shoulder? Wouldn't a better place be on your chest, directly over your heart? 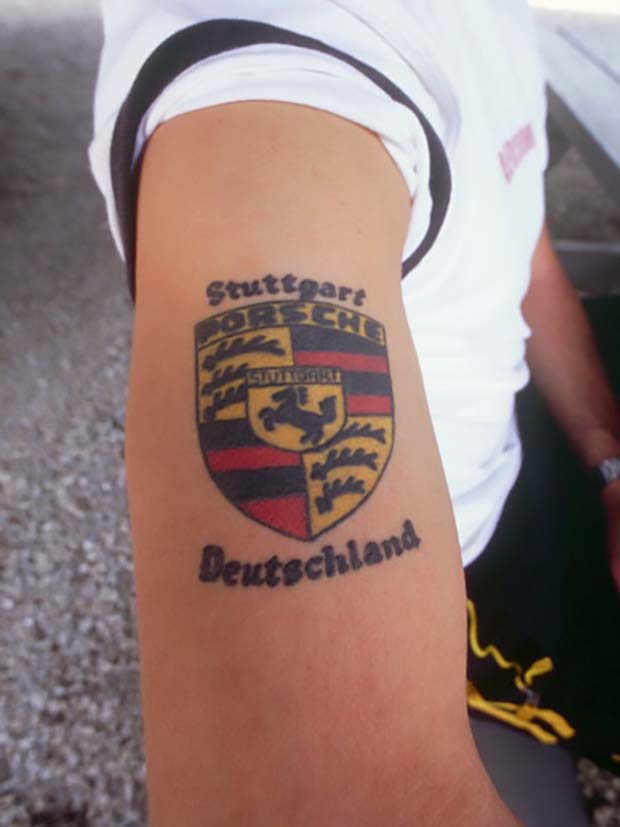 Often, when someone is out strolling in a T-shirt emblazoned with the logo of a famous company, some smart aleck will criticize him for giving away free advertising. However, at least if you get sick of the company, you can always take off the T-shirt. Not this guy though. Unless he's made of Lego, for the rest of his life he'll serve as a walking billboard for Porsche. 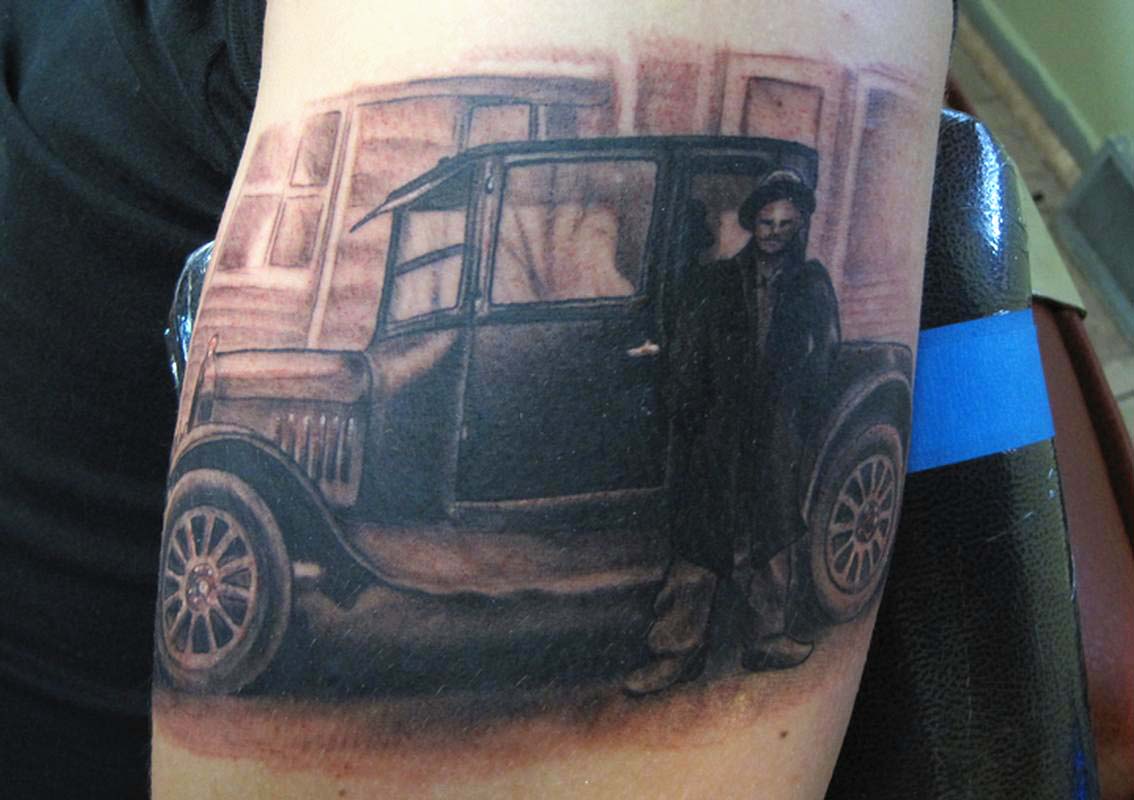 Here's a neat idea. One ink fan found a way to honour his personal heritage and the heritage of the auto industry simultaneously. His family photo album included a nearly century-old snapshot of his grandfather, as a young man, standing proudly next to his first car, a 1925 Ford Model T. One visit to a parlour later and, BOOM, the moment is etched into this guy's skin for the rest of his life. 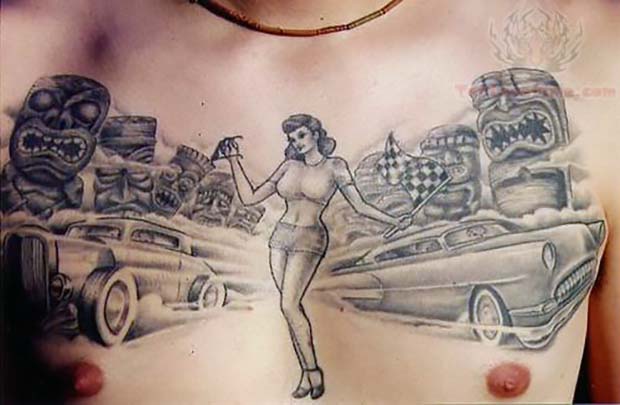 Yikes! Okay, who knows what this guy's future girlfriends' reactions may be, but, hey, it's his life. It's said that tattoos reveal a lot about someone's personality, and looking at this dude's chest is as good as having known him for 20 years. Obviously he's a fan of old-style drag races, or maybe he's just a fan of the movie Grease. I've always wondered if art like this would make things more difficult should he ever be unlucky enough to require open-heart surgery. 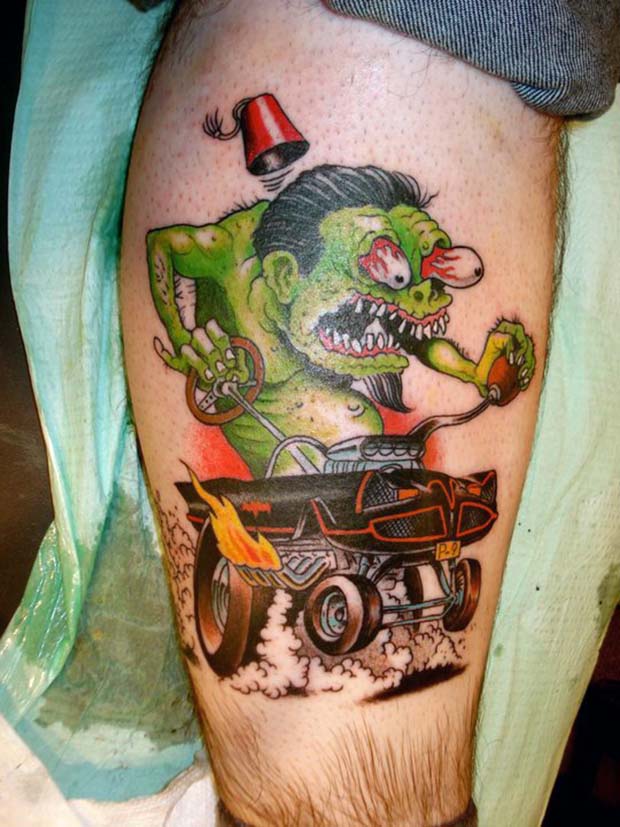 There's no art form, no concept, no moment, no nothing, which can't be improved with the Batmobile. Here's a guy who obviously loves the '60s TV version of the Batmobile, but that sure ain't Batman behind the wheel -- although that gives me an idea for an awesome movie. 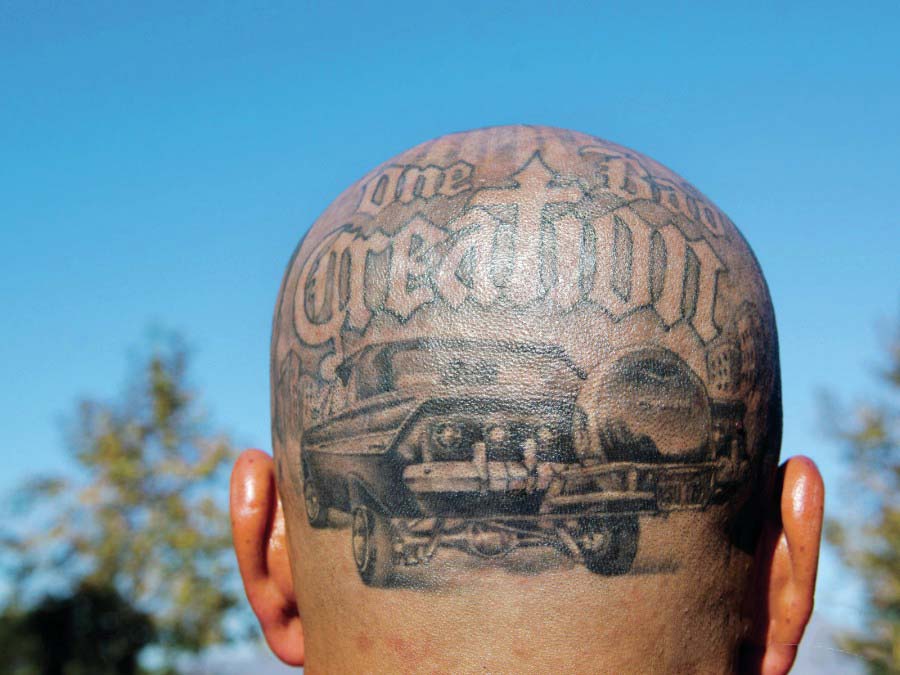 Losing your hair? Don't think of it as going bald. Instead, think of it as nature's gift of a bigger canvas. It's more permanent than a toupee and cheaper than Rogaine, so make the most of it. 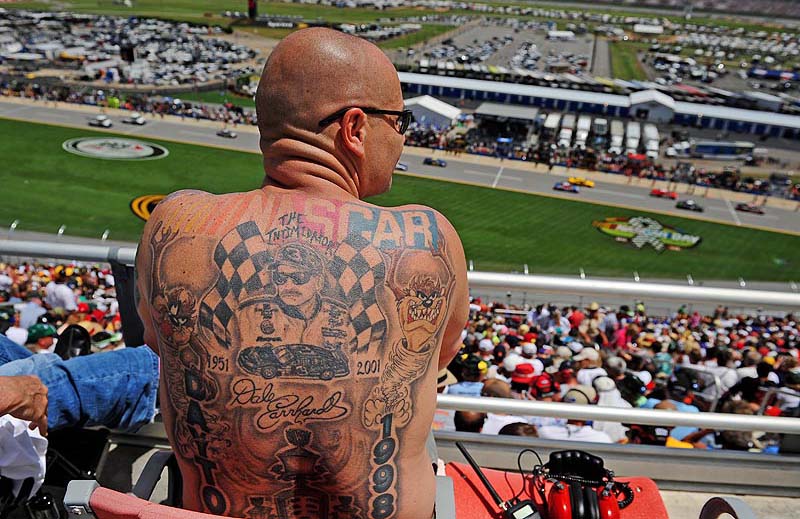 There's no question that Dale Earnhardt was a racing legend, and deserving of numerous tributes, and here we see the most extreme tribute of all. The one drawback is, he's kind of shot his bolt. What if another driver comes along that this guy admires even more? It's not just an easily removable poster on his bedroom wall. Still, he's always got his chest and, oh yeah, his head. 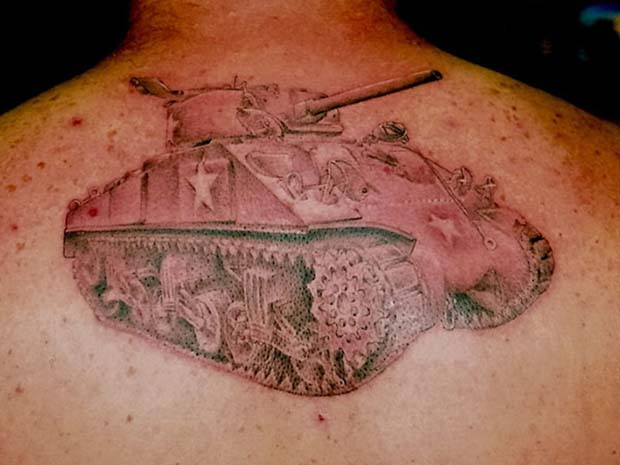 Not everyone opts for a sports car or a logo. The military obviously holds a special place in this guy's heart, the armoured division in particular. What is really striking is the intricacy of the tread and mechanics, a testament to the advances in tattoo technology in recent years. Also, the star on the front of the tank appears to have been done exactly on top of a pimple. That kind of attention to detail doesn't come cheap. 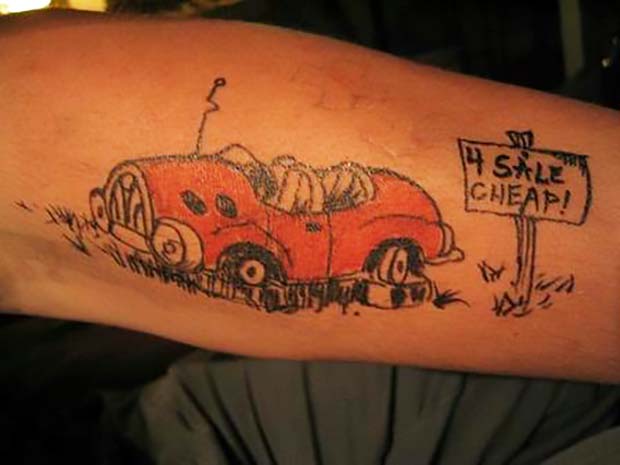 When you get a tattoo, it's with you for life -- barring painful and expensive laser surgery of course. How will today's cutting-edge Lamborghini tattoo look in the nursing home 50 years from now? The painful truth is, it will probably strike people as old-fashioned and out of date. Laughter, however, is timeless. At least a tattoo will give the nurses something to enjoy every time they help him to the bathroom.