Great Canadian Moments at the Indy 500 After James Hinchcliffe's incredible and emotional pole position we look at the five great Canadian moments of the Indy 500.

After James Hinchcliffe's incredible and emotional pole position we look at the five great Canadian moments of the Indy 500.

We may not have the highest number of wins from the last 99 runnings, but Canada’s contributions to the Greatest Spectacle in Racing have been among its most thrilling moments

This year, the Indianapolis 500 will be run for the 100th time and a Canadian, James Hinchcliffe, is starting on pole.

As the Greatest Spectacle in Racing prepares to open its next chapter, it’s only fitting to reflect back on first 99 outings and the enormous impact they’ve made around the world in the realms of both sport and the automotive industry.

The record books show that only 20 different Canadians have made it into the past 99 starting grids, which have each been comprised of the traditional 33 entrants, with only a handful of exceptions, since all the way back in 1934.

However, despite our low attendance numbers, our country’s racers have contributed some of the most thrilling moments to the 500’s storied history.

Five attempts stand out as being the greatest shots Canadians have had at a win from those first 99 Indianapolis 500-mile races. But first, let’s look at a Canuck achievement worthy of an honourable mention. 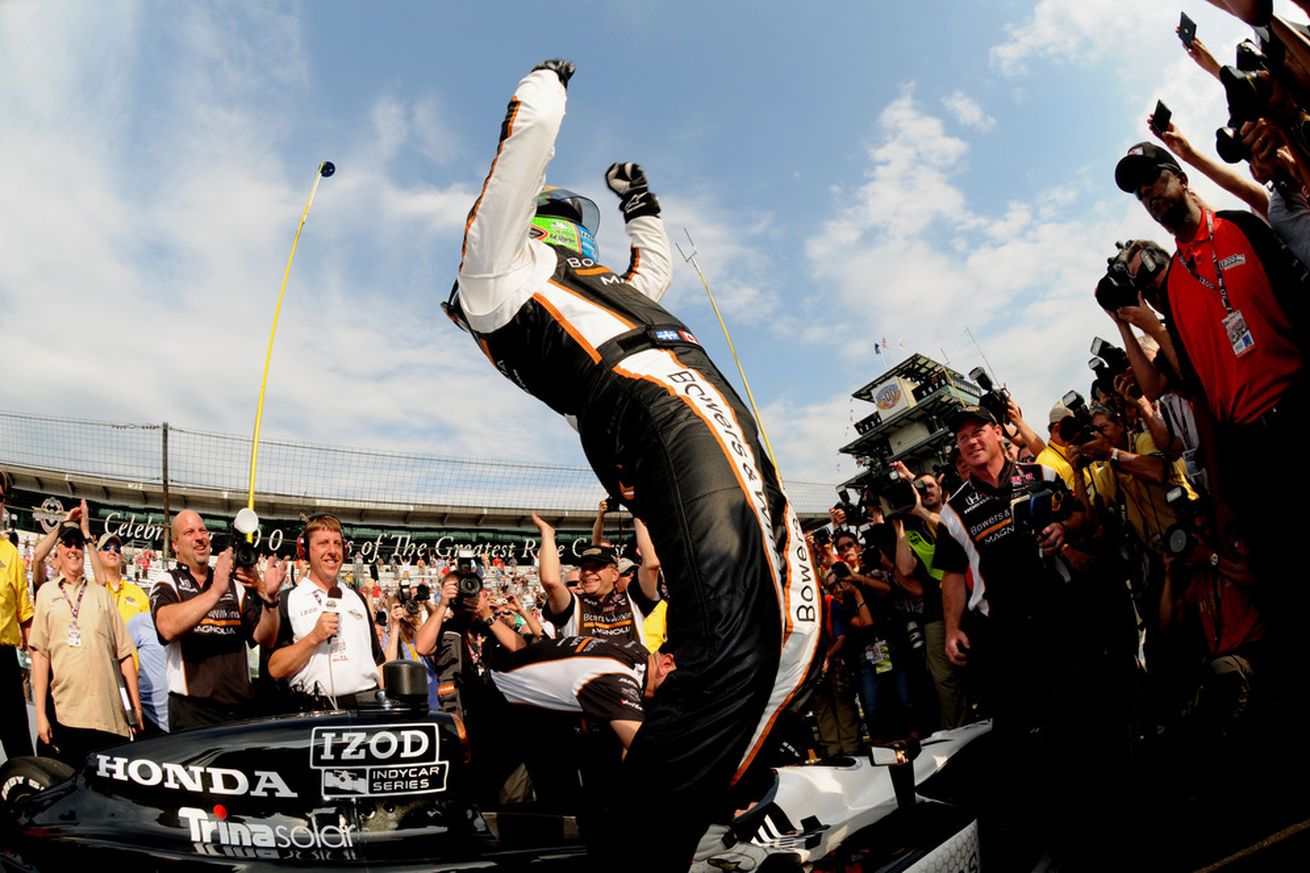 Alex Tagliani of Lachenaie, Quebec, remains the only Canadian ever to start the Indianapolis 500 from pole position, a feat he accomplished in 2011. He did so while driving for Sam Schmidt Motorsports, which made for an especially powerful moment for team owner Sam Schmidt: he had dreamed of winning the 500 and made three starts himself before being rendered quadriplegic in a practice crash at Walt Disney World Speedway in 2000.

On race day, though, Tagliani’s outcome was less positive. He made contact with the wall and was forced to pit on lap 148 and eventually retire, ending the day in 28th place. 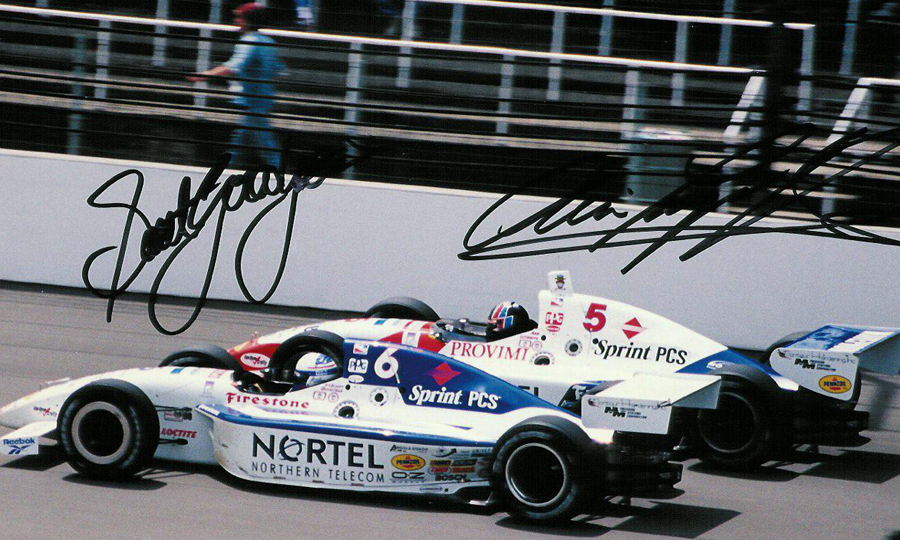 Toronto’s Scott Goodyear made the Indianapolis 500 field on 11 different occasions, the most of any Canadian. In 1997, the weather simply wouldn’t cooperate: the traditional Sunday race day was rained out, and Monday’s restart was red-flagged for rain as well after only 15 laps. It wasn’t until Tuesday that the race could finally run to completion.

A yellow flag flew for debris on the racetrack with five laps to go. When the field restarted on lap 197 of the scheduled 200, Goodyear held second place to his Treadway Racing teammate, Arie Luyendyk. At the end of lap 198, Tony Stewart brushed the wall and was able to continue, but another yellow flag was thrown. In an unusual turn of events, however, the pace car wasn’t sent to pick up the field.

At the start of lap 199, with Luyendyk leading at a slowed pace expecting to finish the race under yellow, the starter’s stand threw the green flag along with the white flag to signal the start of the final lap, taking the entire field by surprise.

As a result, Goodyear was never given a chance to mount a proper challenge for the win and was forced to settle for a second-place finish.

Not coincidentally, 1997 marked the final year that the United States Auto Club sanctioned the Indianapolis 500. The Indy Racing League, run by the same organization as the Indianapolis Motor Speedway, took the reins on officiating duties from that point forward.

1995 – Scott Goodyear Disqualified out of the Lead

The 1995 race was remarkable from a number of perspectives. The venerable Team Penske, incredibly, fully failed to qualify after being neutered by a technical rule change following a dominant performance in 1994. The 1995 running also carries the nickname “The Indianapolis 505” – more on that in a moment.

From Scott Goodyear’s perspective, 1995 was a disaster. He was leading the race when the field was preparing to take the green flag with 10 laps to go, and fellow Canadian Jacques Villeneuve was hot on his heels.

As Goodyear and Villeneuve entered turn four, the pace car peeled off the track and into the pits at an unusually slow pace. Villeneuve backed off to avoid passing the pace car as doing so is against the rules, but Goodyear accelerated past it and headed for the starting line to take the green.

Shortly after the restart, Goodyear was dealt a penalty for his pass on the pace car. Adamant that he had done nothing wrong, Goodyear drove on in disbelief and ignored the black flags signaling him to enter the pits and serve his penalty.

As Goodyear never heeded the black flag, officials stopped scoring him on lap 195, and the record books show him as finishing 14th that day. Fortunately, as far as Canada is concerned, Goodyear’s result is not the end of the 1995 story. Hold that thought.

If there’s any one race whose mention will most readily draw groans from Indianapolis 500 devotees, it’s 2002. No one enjoys having winners declared in boardrooms.

On the second-last lap, leader Helio Castroneves was running slowly to conserve fuel while The Thrill from West Hill, Toronto’s Paul Tracy, was in second place charging hard and gaining on Castroneves rapidly.

As the pair approached turn 3, Tracy saw his opening for a pass and moved to the outside. Within a fraction of the moment of Tracy completing the pass, two cars touched and crashed in turn 2, bringing out a yellow flag.

It’s here where accounts get fuzzy on exactly what went down.

Castroneves maintains that he saw the yellow light on his dashboard and immediately lifted off the throttle.

Tracy, convinced that he had passed Castroneves just before the yellow was signalled, began celebrating from the cockpit.

But officials declared Castroneves the winner in the moment, which set off a series of protests and appeals that dragged on for months.

Some feel the call was politically motivated. Tracy was primarily competing in CART at the time, a rival series to the Indy Racing League, which at that time sanctioned the 500.

The result of the appeal, however, was that Indy Racing League rules explicitly stated the decision of the officials in race conditions could not be protested, which left Tracy and his team, Team Green, with no hope and no recourse.

To this day, those brave enough to ask Tracy about the incident are told in no uncertain terms that he feels he’s the only rightful winner of the Indianapolis 500 without his likeness on the Borg-Warner Trophy to show for it. 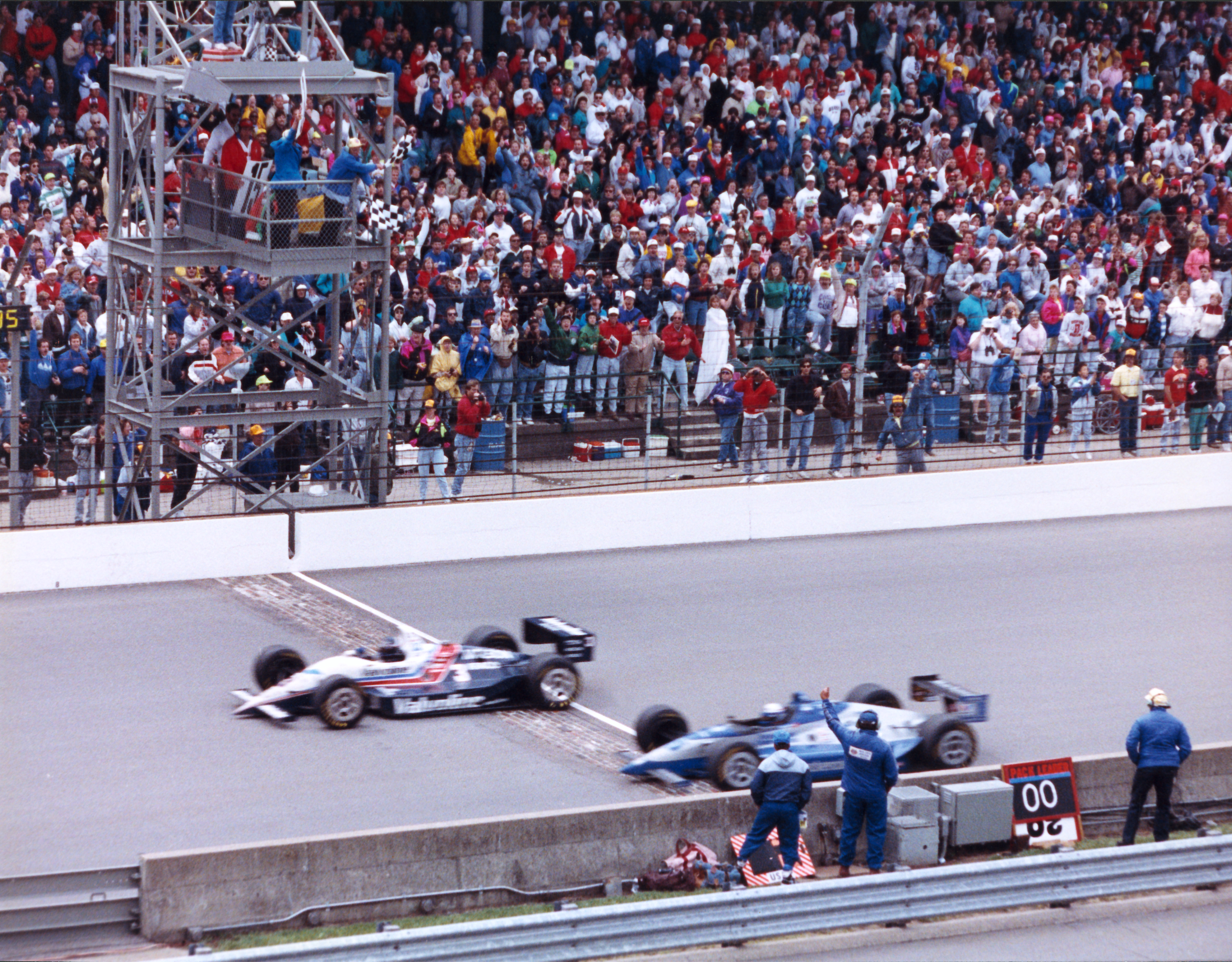 It’s remarkable how often Scott Goodyear’s name comes up in discussions of great Canadian moments at the Indianapolis 500.

The 1992 race was one of the most bizarre, crash-filled, and yet memorable outings of the past few decades. That entire month of May was unseasonably cold, and the challenging, low-grip conditions on race day caught many drivers out – including polesitter Roberto Guerrero, who spun out and crashed before having a chance to take the very first green flag.

With just over 10 laps to go, Michael Andretti dropped out with a fuel pump issue after having dominated much of the race. This set up a seven-lap sprint to the checkered flag in which Goodyear and Al Unser, Jr. delivered a nail-biting, edge-of-the-seat master class in open-wheel oval racing.

Unser, Jr.’s car broke loose in turn 4 on the final lap, which gave Goodyear an opportunity to pounce. He dove to the inside and barreled down the front straightaway, but at the start-finish line he came up short – by just 0.043 seconds, a record that stands today as the closest finish in Indianapolis 500 history.

The margin of victory isn’t the only statistic still on the record books from 1992. Goodyear worked his way up to 2nd from 33rd place, or last, due to a penalty that came from failing to qualify his own car and having to take over that of his teammate. His run through the field from 33rd place to within a breath of a win stands as the widest difference between start and finish position of the modern era.

And here we find ourselves looking back once again at 1995.

Scott Goodyear’s downfall was passing the pace car on the final restart heading into lap 190. Unbelievably, a similar fate was suffered earlier in the race by his fellow countryman, Jacques Villeneuve of Saint-Jean-sur-Richelieu, Quebec – son of the great Formula One driver, Gilles Villeneuve, and nephew of a racing driver who shares his name, who made one start at the Speedway himself in 1986.

On lap 38 of the 1995 race, the younger Jacques, unbeknownst to him, inherited the lead after a yellow flag for debris triggered a frenzied rash of pit stops. Being unaware that the pace car was trying to get in front of him as the race leader, Villeneuve blew past it. He was later assessed a two-lap penalty and from that point looked to be well out of the running.

But through a series of brilliant strategy calls, Villeneuve had made up the full deficit less than 100 laps later. This required him to complete two more laps than everyone else in the field – hence the nickname “Indianapolis 505,” as each lap at the Speedway measures 2.5 miles – to set himself up for the final showdown against Goodyear.

Once officials stopped scoring Goodyear on lap 195 due to his failure to serve his penalty, Villeneuve sailed on to take the win and become the only Canadian in 99 races ever to win the Indianapolis 500 and have his face emblazoned on the Borg-Warner Trophy.

Villeneuve’s legacy didn’t stop there. He went on to win the overall Indy Car championship that year and then shifted to Formula One in 1996, where he ascended to the title of World Champion while racing for Williams in 1997. Amazingly, Villeneuve logged his greatest achievements in both CART and Formula One in only his second year of competition in each series. 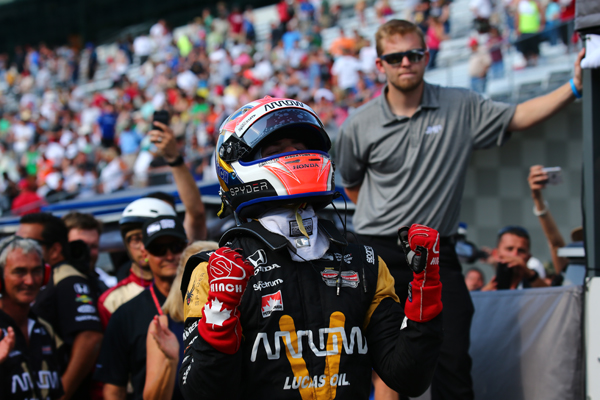 The newest addition to this story may take over the title of being the most special. At this time last year, James Hinchcliffe sat ailing in the critical care unit of IU Health Methodist Hospital in downtown Indianapolis after a crash at Indianapolis Motor Speedway very nearly took his life. After months of recovery, Hinchcliffe finally returned to Indianapolis this month. Not only has he approached it fearlessly, but he's now left an indelible mark: he qualified on pole for next Sunday's running of the Indianapolis 500. The achievement marks his first pole position ever in the Verizon IndyCar Series.

Hinchcliffe and Tagliani will bookend this year's field after the latter crashed on his second-day qualifying attempt, forcing him into the 33rd and final starting position. Both are set to attempt to add to Canada's legacy in the Indianapolis 500 for this year’s 100th running. Will either of them lodge a second win for the maple leaf in the most prestigious edition yet of the Greatest Spectacle in Racing? Tune in to find out on Sunday, May 29th. Coverage in Canada is on ABC and Sportsnet.