This Silver Arrow is ready for you.
Advertisement

This Silver Arrow is ready for you.

The partnership between Mercedes and McLaren began in 1995. A struggling Formula 1 team looking to rekindle past glory, and an automaker who needed an image boost, but who had withdrawn from F1 40 years prior. It took only three years for the pair to win a Formula 1 world championship, and they did it again the following year.

Mercedes wanted to celebrate this by creating what would be their vision of the ultimate road car. The car would celebrate their current racing victories, but would also be a look back at the 300 SLR of 1955. The concept was revealed at the 1999 North American International Auto Show.

When Mercedes-Benz decided to make the show car a reality, who better to help bring it to life than their F1 partner, and builder of the then fastest car in the world, McLaren. The production version was shown in late 2003, and the plan was for seven years of production.

The engine: an AMG designed 5.4L supercharged V8 with dry-sump oiling to let the engine sit lower in the chassis. It's hand-built, each engine assembled by a single technician at AMG. The car makes 617 hp and 580 lb-ft of torque. For optimum handling, and to provide an excellent centre of gravity, the engine is half a metre behind the front axle, making it a mid-engined car. The transmission was a five-speed automatic, picked over the dual-clutch available at the time for improved reliability and lightness. It is tuned by AMG for faster shifts, and has programmable modes for comfort or sportier driving.

The chassis is carbon-fibre, for light weight, with suspension attachments and components made from aluminum. The body is inspired by both the original 1955 300 SLR and the McLaren-Mercedes F1 cars of the early 2000s. The exhaust exits in front of the driver's door, a feature taken directly from the classic Mercedes racers, along with the gull wing doors. On the original car, the flip up doors were the only way to let the driver climb in over the wide sills with a stiffened frame lurking inside them. Today, they are a unique styling element, and let's face it, just plain cool. The nose is taken from the F1 cars, and uses the aerodynamic lessons learned from F1 to optimize handling for the road as well as for the track. There is a four-way adjustable rear wing that provides down force as well as automatically popping up to act as an air brake at speed. Speaking of which, the SLR is capable of reaching 335 km/h, given enough space and a closed course. Since the wing can't stop you on its own, there are carbon ceramic brakes to keep the power reined in and provide reliable stopping power every time without fade.

Inside there is carbon trim surrounding the driver and passenger. Even the sport seats are made from the composite material. And whatever isn't carbon is most likely leather, beautifully trimmed and stitched. This is as much a tourer as it is a supercar, so there are still all of the comforts you expect of a Mercedes. Bose stereo, automatic climate control, HID headlights. Even multiple storage compartments and a real trunk. 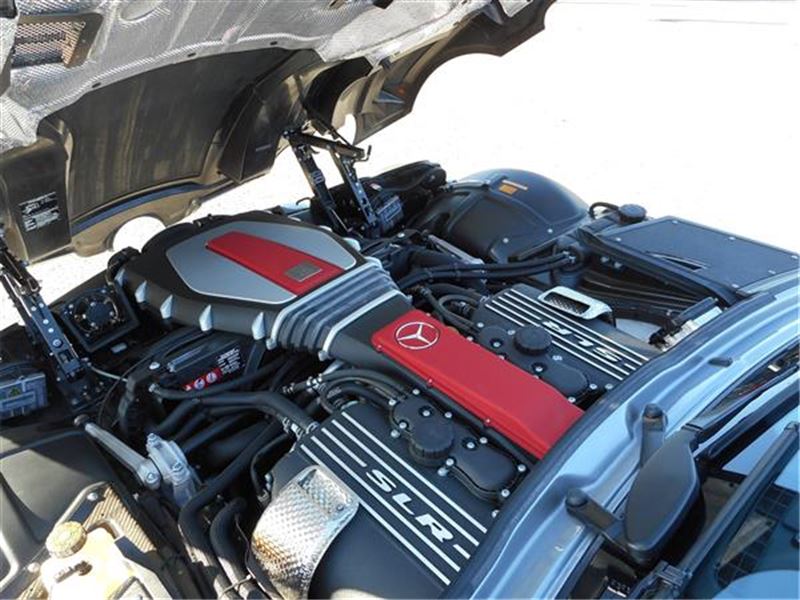 The Mercedes-Benz SLR McLaren was produced in small numbers. Intended for a run of 3,500 over seven years, the actual number was closer to 1,400. What that means is that today's find of the week is both a special collaboration, and a rare car.

Our find of the week is a 2007 model for sale in Mascouche PQ, just outside of Montreal.  It has under 7,000 km on the odometer, so it's practically a new car. More importantly, it is also the special 722 edition. The 722 commemorates the legendary 300 SLR that Sir Stirling Moss drove to a legendary victory in the Mille Miglia in 1955, driving 1,000 miles through the Italian countryside along with navigator Denis Jenkinson. The pair averaged 160 km/h and won by nearly 30 minutes. 722 was the number his car wore, representing his start time in the race (7:22 am). The 722 has larger 19-inch wheels, a lower ride height with stiffer suspension. There are also larger brakes and improved front air dam and rear diffuser. Power is also bumped to 640 hp and a nice round 600 lb-ft of torque. It even comes with a custom cover and special battery charger. But really, what more do you need for summer touring than 617 hp, gullwing doors, and a loud side exhaust.