Palermo, Sicily – Soon after getting off the plane in Palermo for the 2017 Maserati Quattroporte launch, I got hit by a Scirocco. Not the Volkswagen kind, but in fact that car’s namesake – a hot wind that blows off the deserts of North Africa. This was a new kind of hot. Forty-freakin-seven degrees Celsius hot, along with a blasting wind that sucks the moisture out your body like a camel topping up at an oasis.

Adding to the bizarre welcome were the raging fires in the hills surrounding this decidedly third-world-looking city, apparently set by arsonists unhappy with the political situation in Sicily. Acrid smoke filled the air, and water bomber aircraft looped from harbour to hills for my entire two-day stay.

Maserati sure knows how to make an impression.

This year marks the 90th anniversary of Maserati’s win at the 1926 Targa Florio race. But let’s step back a few years. 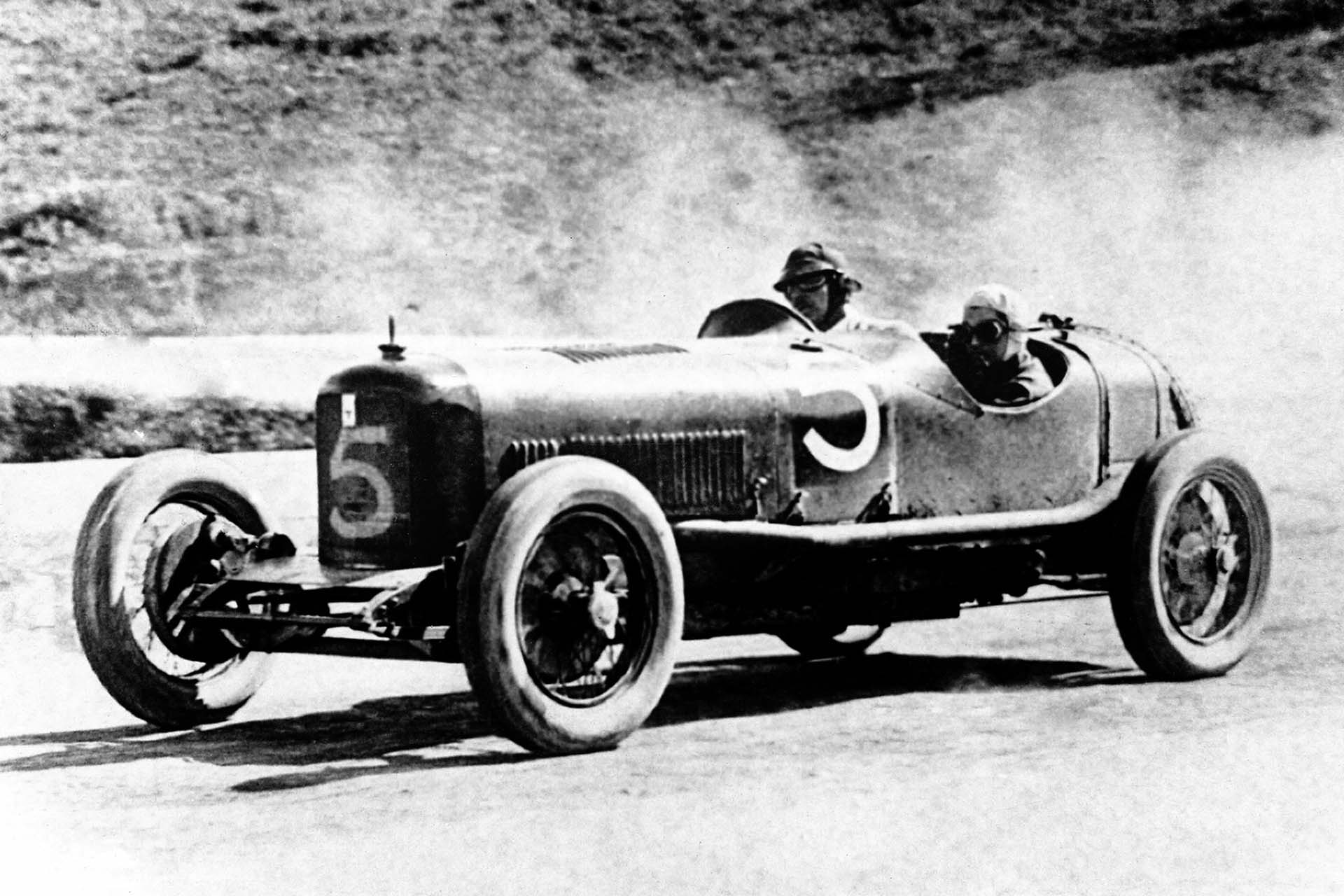 Four Maserati brothers – Alfieri, Ettore, Ernesto and Bindo – were united in their passion for the automobile and racing, and on December 1, 1914, opened Officine Alfieri Maserati in the heart of Bologna.

Among other projects, they built 2.0-litre Grand Prix racers for Diatto. When that contract ended, the brothers developed their own race car – the Maserati Tipo 26. Powered by a twin overhead cam supercharged 1.5-litre straight-eight, this was the first car to bear the Maserati name.

Its debut race was the 1926 Targa Florio, winning first in class and ninth overall with builder Alfieri Maserati at the wheel – a mighty impressive starting point from which to build a legacy.

Maserati also monopolized the Targa Florio from 1937-40. Good years those, as across the pond Wilbur Shaw won the Indianapolis 500 in 1939 and 1940 at the wheel of a Maserati 8CTF.

So yeah, there’s some history in Sicily for Maserati, and that’s what the Modena-based automaker is here to acknowledge. We will be driving the refreshed 2017 Quattroporte on sections of the old Targa Florio course that winds up through the rocky hills of this arid island. 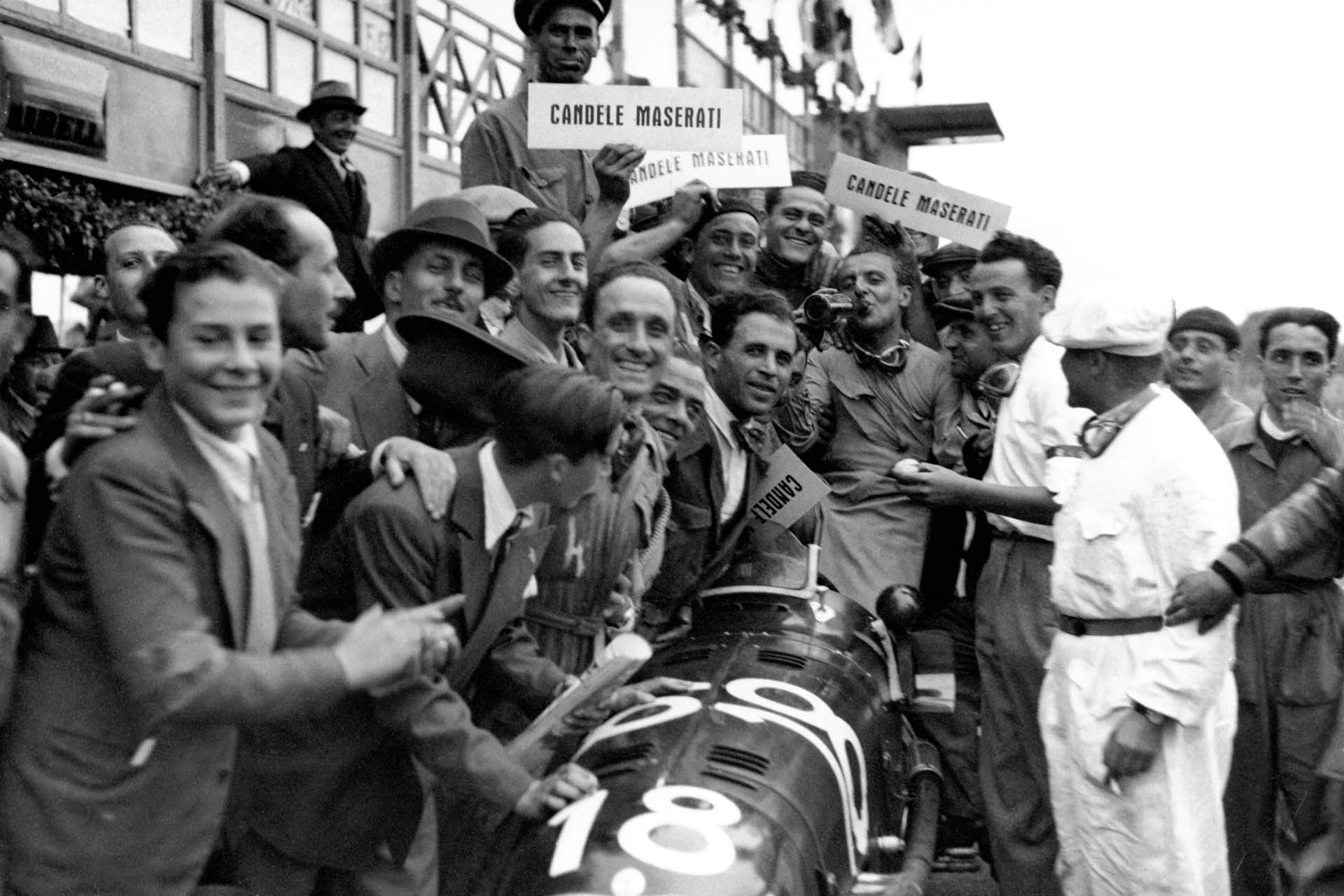 Maserati might be courting the mainstream with the Ghibli mid-size sedan, Quattroporte full-size luxury sedan and upcoming Levante SUV, but it doesn’t take more than a few moments behind the wheel of the 2017 Quattroporte to realize this Italian car maker still marches to its own accordion. The look, sound and feel of the sedan separates it from its competitors by a healthy and passionate margin. You will not take this car for anything other than Italian.

That said, the improvements to the 2017 model are much needed, and give the Quattroporte a broader appeal. Notable are reduced NVH, richer interior appointments and a suite of modern radar- and camera-based systems – adaptive cruise, collision-mitigation braking, lane-departure warning and surround-view camera.

Ah, about those engines. Both the twin-turbo V8 and twin-turbo V6 find their DNA in Ferrari, and are built at the Ferrari factory in Maranello. These internal-combustion wonders go a long way in defining the Quattroporte. The 3.8-litre V8 doesn’t use Ferrari’s flat-plane crank, but it still makes a fabulous noise. And if you thought Jaguar’s 3.0-litre supercharged V6 was the cat’s ass when it comes to aural hijinks, this 3.0-litre Maserati/Ferrari unit puts that notion to bed. When in Sport mode it wails, snaps, crackles and pops like Caruso after a night of drinking cleaning products. 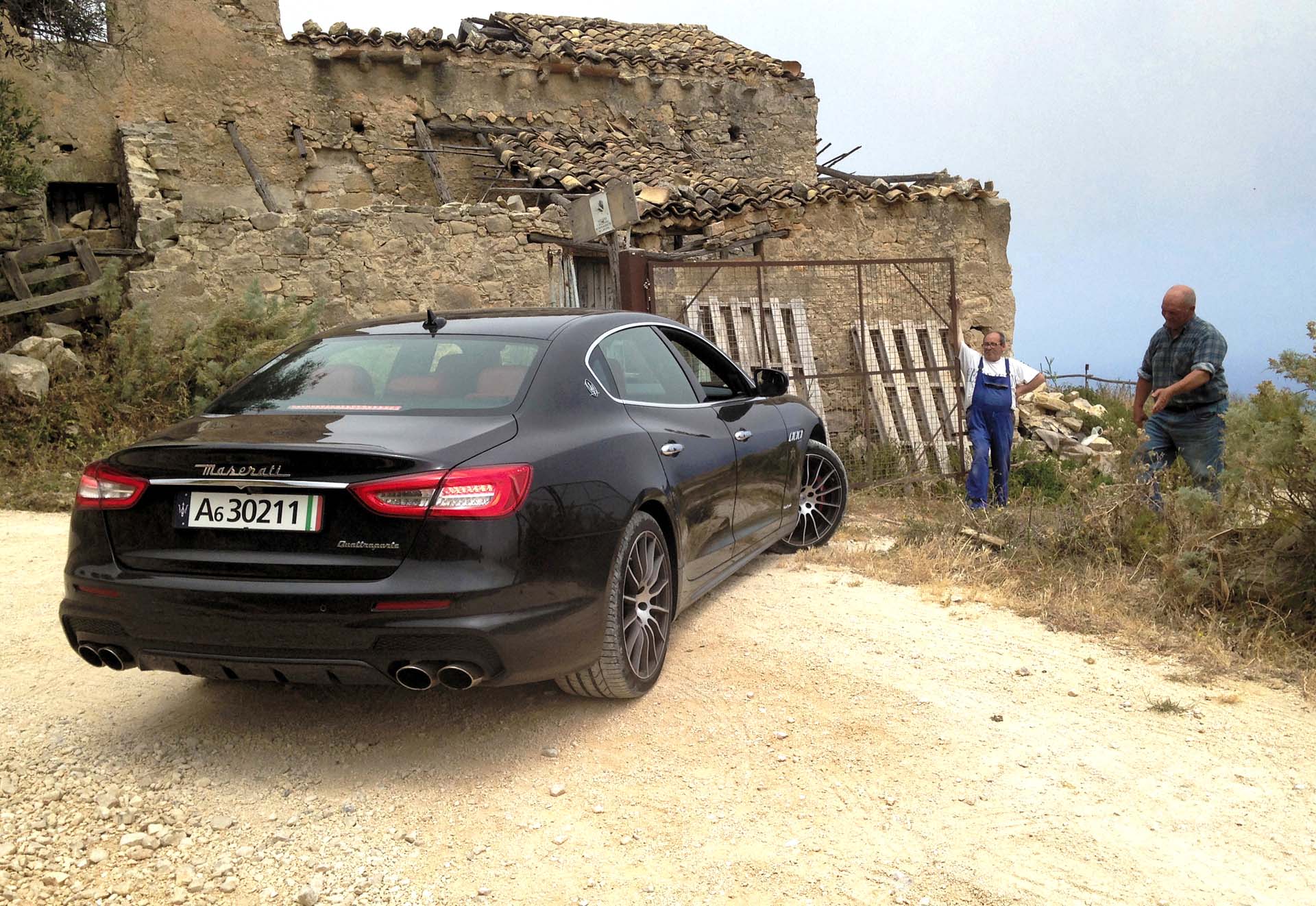 So why Ferrari? Weren’t Maserati and Ferrari bitter rivals for a big chunk of the 20th century?

And within all that shuffling, Maserati teetered on the brink of bankruptcy several times. Production dropped to just over 100 cars in 1975.

We meet our posse of 2017 Quattroportes at the Chinese Palace inside Palermo’s Royal Park of Favorita, created by King Ferdinand IV in the late 18th century. You’ll spot the 2017 Quattroporte by its more pronounced “shark” grill with concave vertical strakes and a very large central trident.

The Trident logo comes from the Fountain of Neptune in Bologna’s Piazza Maggiore, where a bronze statue of Neptune holding his trident has stood since 1567. It was suggested by Mario Maserati in 1920, an artist and the only brother not involved in building the cars.

Maserati withdrew from factory racing in 1957 due to the tragic events at that year’s Mille Miglia, although they continued to build cars for privateers. From then forward, the onus was on building grand-touring road cars. The 1957 3500 GT with its 3.5-litre inline-six was Maserati’s first production car. 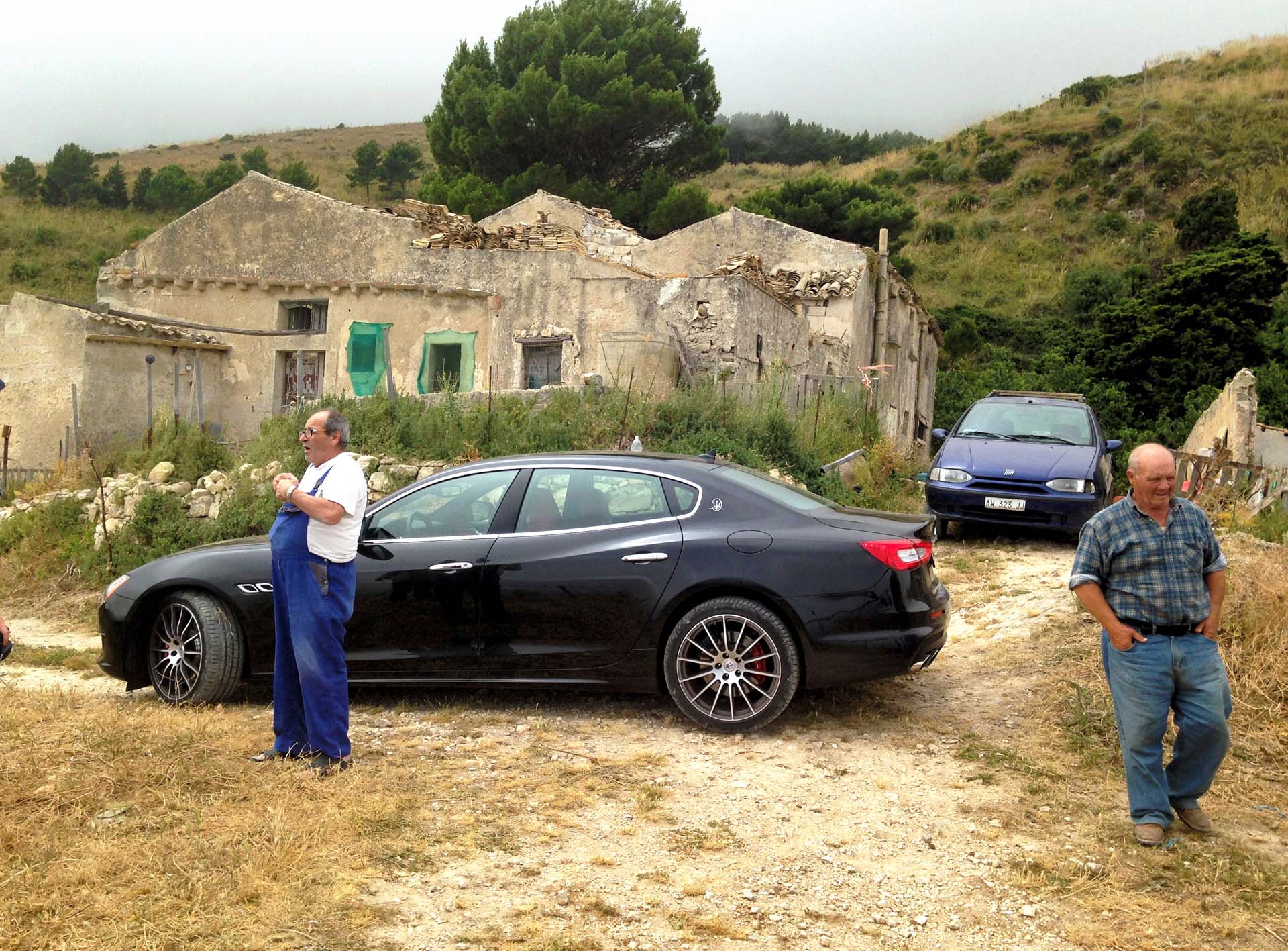 This sixth-generation is not quite so stunning (how could it be?), but it still cuts an arresting profile. Buyers of luxury cars like bespoke, and Maserati takes a nod to that by tailoring the 2017 Quattroporte in two distinct trims: GranSport and GranLusso. Optional on the S Q4 and standard issue with the GTS, these are purely cosmetic interpretations – there are no mechanical differences.

GranLusso leans to the luxury side, with its marquee feature being the truly striking Ermenegildo Zegna Edition interior with woven silk fabric seat inserts, doors, sun visors and headliners.

The GranSport rides on 21-inch wheels, gets more aggressive front intakes, bigger quad tailpipes, a piano black rear spoiler, red brake calipers and a blue insert on the trident logo. Inside we are treated to contoured sport seats both front and back, a leather/carbon-fibre sport steering wheel and stainless steel pedals.

Whichever trim is chosen, an upgraded infotainment system with an 8.4-inch screen dominates the centre stack. It’s still based on the Chrysler Uconnect touchscreen system (which is one of the best of its kind) but now benefits from classier graphics, Apple CarPlay and Android Auto compatibility and a new rotary controller behind the electronic shifter. 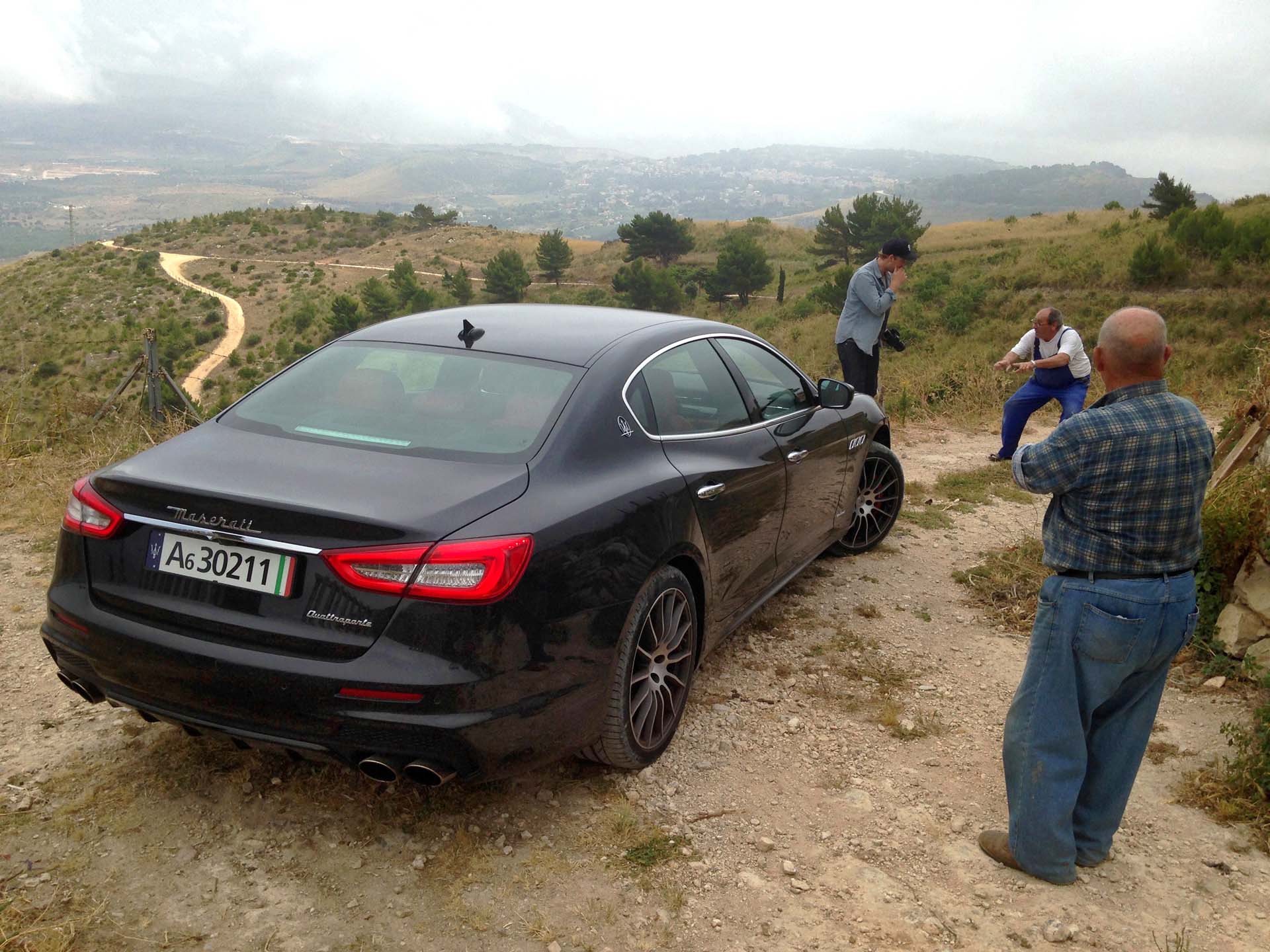 After blasting along the coastal Autostrada in our black S Q4 GranSport (the 120 km/h speed limit in Sicily is merely a suggestion), it’s time to attack the switchbacks of the old Targa Florio course that take us to the medieval walled town of Erice. Okay, attack is the wrong word. There is a parade of beat-up Fiats and buses weaving their way up, so my co-driver and I turn off on a narrow dirt track that clings to the hillside. Mission: cool photo ops.

About a kilometre in, we come across an ancient crumbling farm with a couple of old Sicilian men feeding some equally weathered-looking horses. These guys can’t speak a word of English, and our Italian starts and ends with mamma mia and fuggedaboudit, so it’s all smiles, gestures and valiant attempts at communication. They are as thrilled to see our Maserati as we are to see this fantastic old homestead. Before long we are the best of friends. When Alfredo learns I am from Canada he gets very excited. “Ah Canada! Toronto! Montreal!” Then he points to the Quattroporte and pounds his chest. “Maserati! Italiano!”