A Harley for the haters?
Advertisement

A Harley for the haters?

For some people it’s the look. For some it’s the sense of freedom. Some of us are drawn to the ideology of toughness, bravado, and non-conformism.

It’s fair to say that no brand in all of the automotive world has done as good a job of tying itself irrevocably to that ideal than Harley-Davidson.

That’s why HD is the world’s most successful motorcycle brand with a loyal customer base that embarrasses most of the competition. Only Honda outsells Harley – but Honda’s model portfolio covers every type of motorcycle imaginable. Here in North America, when a person first starts to think “motorcycle” – more often than not, they want to ride a Harley.

I’m not one of those riders. 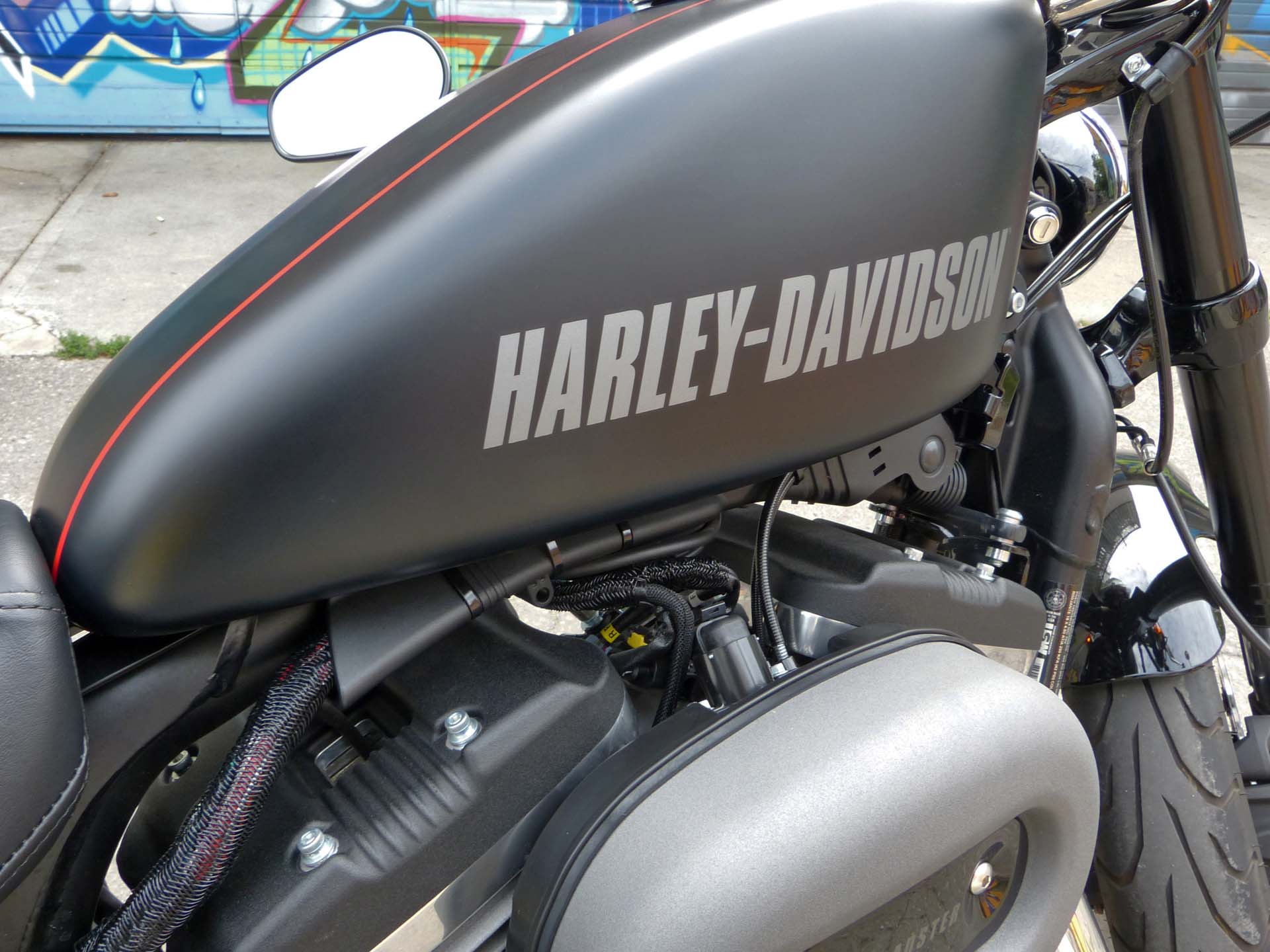 A sport-bike guy by nature, I’ve always found the allure of the Cruiser set inaccessible and even confusing. Indeed, it was only when one of my colleagues posted on Facebook that this new Harley-Davidson Roadster was “a proper sporty Harley” that I was motivated to give it a crack.

The Roadster is the latest bike in the Sportster line-up, part of Harley’s new Dark Custom range. It might have been aimed squarely at riders like me.

This one, my colleague explained, had proper suspension travel, good ground clearance and even a decent riding position. This one, he went on, can corner. Well.

Corners are my favourite part of riding a motorcycle. My interest was piqued. Is this a Harley-Davidson that breaks out of the iconography and offers up genuine riding enjoyment? 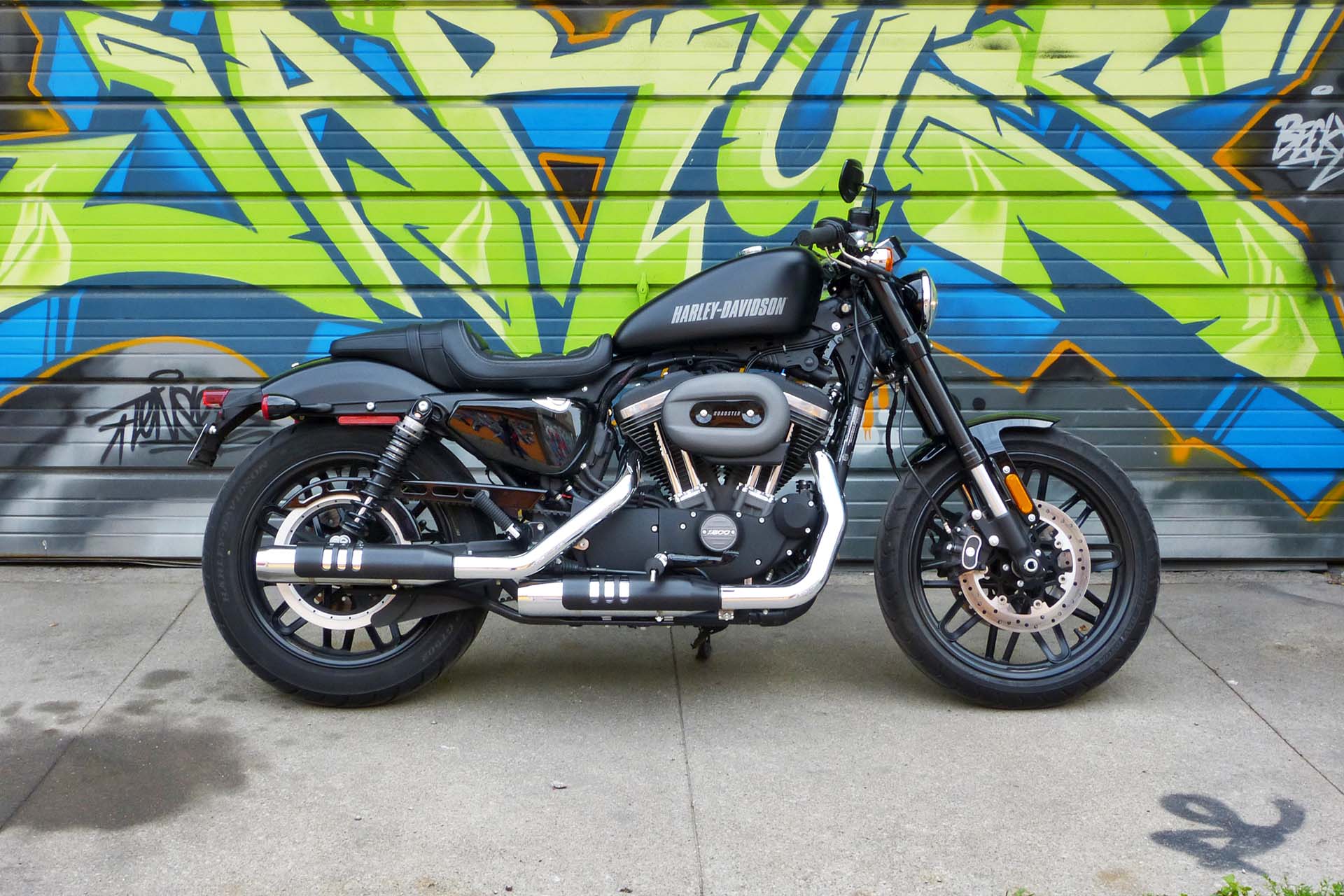 Imagine a typical sport bike tuck, body leaned forward, arms low, legs underneath you. Now, take that whole position, tilt it backwards until the rider sits almost upright, but with his arms and legs in a very similar sport-bike tuck position. That’s what it feels like to ride the Sportster. The bars are a short reach, the seat so low your knees are high. It’s surprisingly comfortable and even fun. The position accentuates the sensation of muscling the bike around.

That this is a more athletic Sportster than the previous generation is utterly undeniable from the moment you swing your leg over. Even the highly stylized fuel tank has an air of speed about it – now if I could only stop my right knee from bashing into the airbox cover… 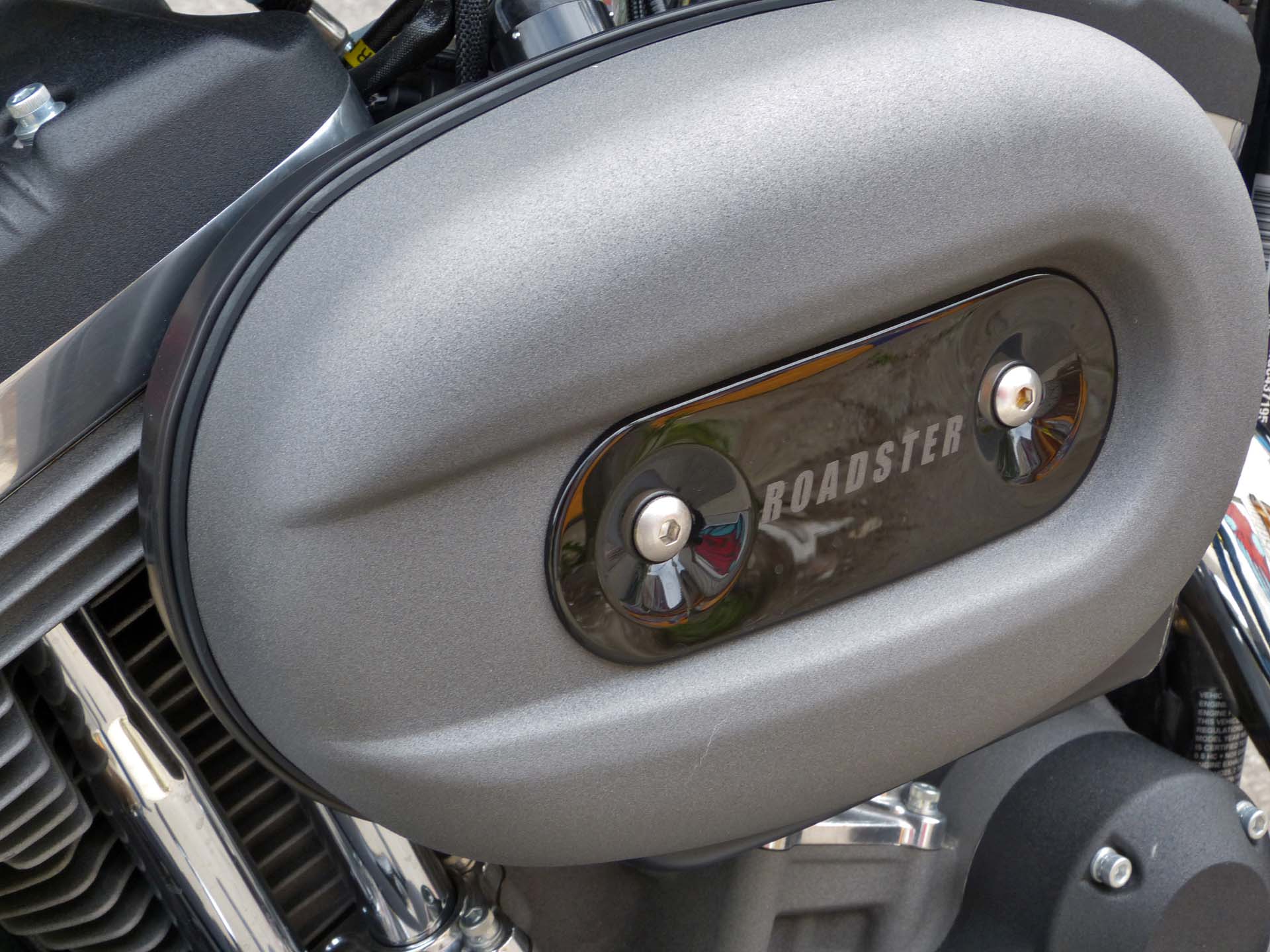 The 1,200 cc V-Twin is one of those engines that people drool over. The retro-style airbox on the side, the swept-back dual exhausts – there’s a deliberate emotional reverence bred into these motors that goes beyond the lump V-Twin bobble. I now know why Harley riders are always blipping the engine at red lights too – the 45-degree V-Twin vibration is cool for a while but soon becomes bothersome at idle. Blipping the throttle smooths it out momentarily which gives your teeth a rest.

The Roadster pulls confidently and smoothly from low in the rev range but runs out of revs quickly at 6,000 rpm. It is fair to say that Harley-Davidson is not a manufacturer chasing heady power numbers, with only 67 hp from this 1,200 cc engine. To put it into perspective, the 650 cc 2017 Suzuki SV650 is good for 75 hp. Harley enthusiasts will tell you that torque is where the Milwaukee mob shine and this Roadster puts out 76 lb-ft of the stuff. That handily beats the SV’s 57 lb-ft but in an engine twice the size, that’s to be expected.

It’s not an apples-to-apples comparison I’ll grant you, but it does highlight the relative lack of output from such a big engine. But again, it’s not about that. It’s about delivering an iconic sound, while pulling away confidently from a stop light leaving admiring drivers in your wake.

At highway speeds though, the Roadster takes a little coaxing to overtake.

This is a tough unit for sure, but not one that wins any performance awards. Does good burnouts though. Allegedly. 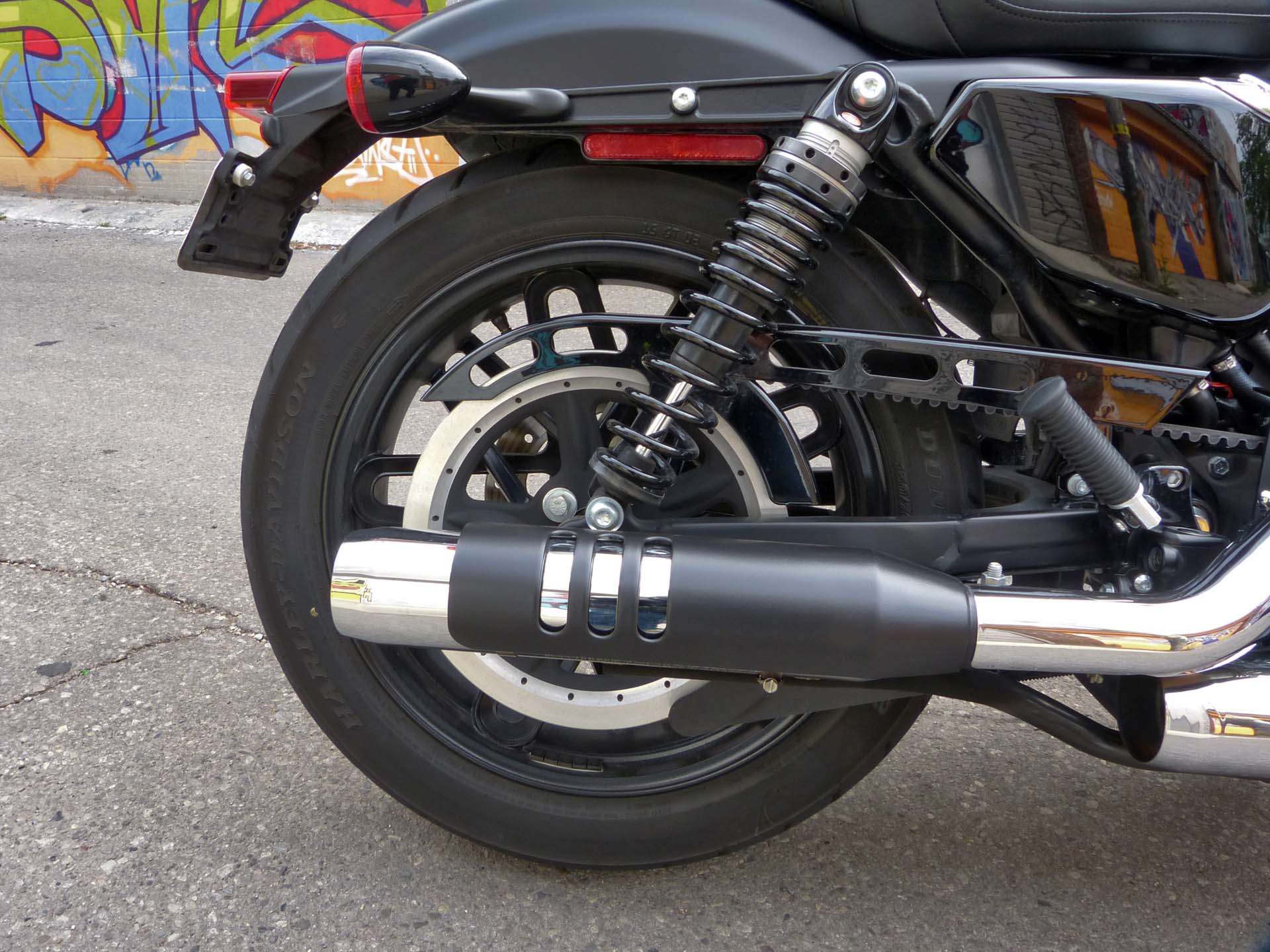 The Roadster boasts more travel than any other Sportster in the line-up. The upside-down forks are good for 115 mm of travel, the twin rear shocks good for 81 mm. The taller suspension helps the Roadster achieve 31-degree lean angles, which is a high for Harley and the reason this bike is actually enjoyable to ride fast on twisty roads.

The suspension is also compliant in corners and does a good job of changing direction. It’s rough in a straight line over anything more than a small bump so expect to get a tailbone workout – but it does soak up those same bumps without a change in trajectory better than previous Harleys I’ve ridden.

At 785 mm the seat is low enough for me to get both feet down, but at 5’6” I can’t flat-foot the way I can on other cruisers. Again though, this isn’t a complaint. That higher seat height allows the ground clearance so necessary for enjoyable cornering – and so missing from the rest of the Harley lineup.

To be honest, this is where the Roadster really won me over. I didn’t expect to enjoy off-ramps – or any other corner – yet I did. The feeling is more alien to me than other bikes with a more conventional, modern profile. One I got used to it though, the sensation of hustling this Roadster through the corners was immensely rewarding. 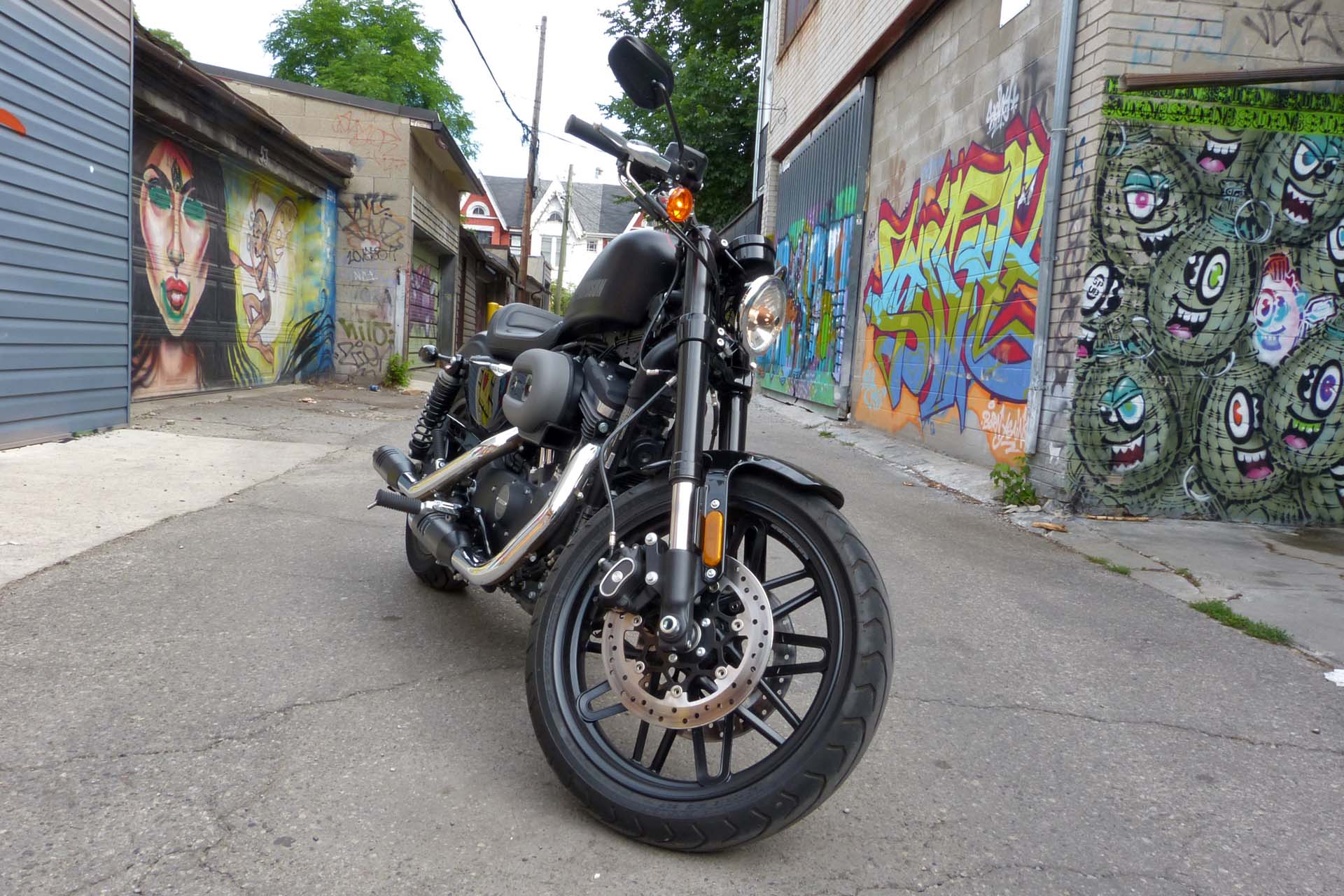 There is no bike I’ve ridden in all my years riding that got more comments than this Harley-Davidson Roadster. No bike that generated as much random conversation, admiring nods or questions.  When I stepped off it, I walked with a strut despite myself. When I looked back at it, I couldn’t help but smile. “Damn, that thing looks TOUGH.”

I didn’t set out to love this bike, but I did develop an appreciation for it.

No, the newest Sportster is not a sports bike. But it doesn’t really pretend to be. If you want a sports bike – go buy one. There are lots out there.

But if it’s the iconic biker style that motivates you; if you’re driven by the sense that you belong to a tribe, that you’re a part of a movement; if you love the idea of being a biker and yet you also want some enjoyable riding dynamics, this is absolutely the bike for you.