Anatomy of a Recall: What to Do if Your Vehicle is Recalled So you're car is being recalled...

So you're car is being recalled...

Unless you live in a cave, you've probably heard about the massive Takata airbag recall affecting more than 4.3 million cars and trucks in Canada and another 60 million-plus in the United States. In Canada, the first Takata-related recall was issued in 2008, and since then it's become one of the most significant recalls in the history of the auto industry.

But the vast majority of vehicle recalls don't make the news. On a near-weekly basis, Transport Canada issues recall notices covering everything from faulty suspension and drivetrain components to labels that list incorrect information about recommended tire pressures. Some apply to hundreds of thousands of vehicles (these are the ones that might make the news), while others literally affect a single vehicle, like this one. The common denominator is that Transport Canada deems the issue a potential threat to the safe operation of the vehicle.

So if your car or truck is recalled, but it's not notable enough to make the news, how will you find out about it?

Check your mail
Transport Canada may be responsible for initiating most vehicle recalls in this country, but it's the manufacturer's responsibility to notify owners that their vehicle requires attention, and that's usually (still) done via snail mail.

Once a recall has been issued, Transport Canada says it's up to the vehicle's owner to get the work done. That's an important thing to note for used car buyers: a manufacturer may not realize the pre-owned car you just bought has changed hands. In spring 2015, my father sold a 2003 Corolla to a private buyer, and more than a year later he got a letter from Toyota notifying him that the company is replacing passenger-side front airbag inflators in those cars as part of the Takata recall. 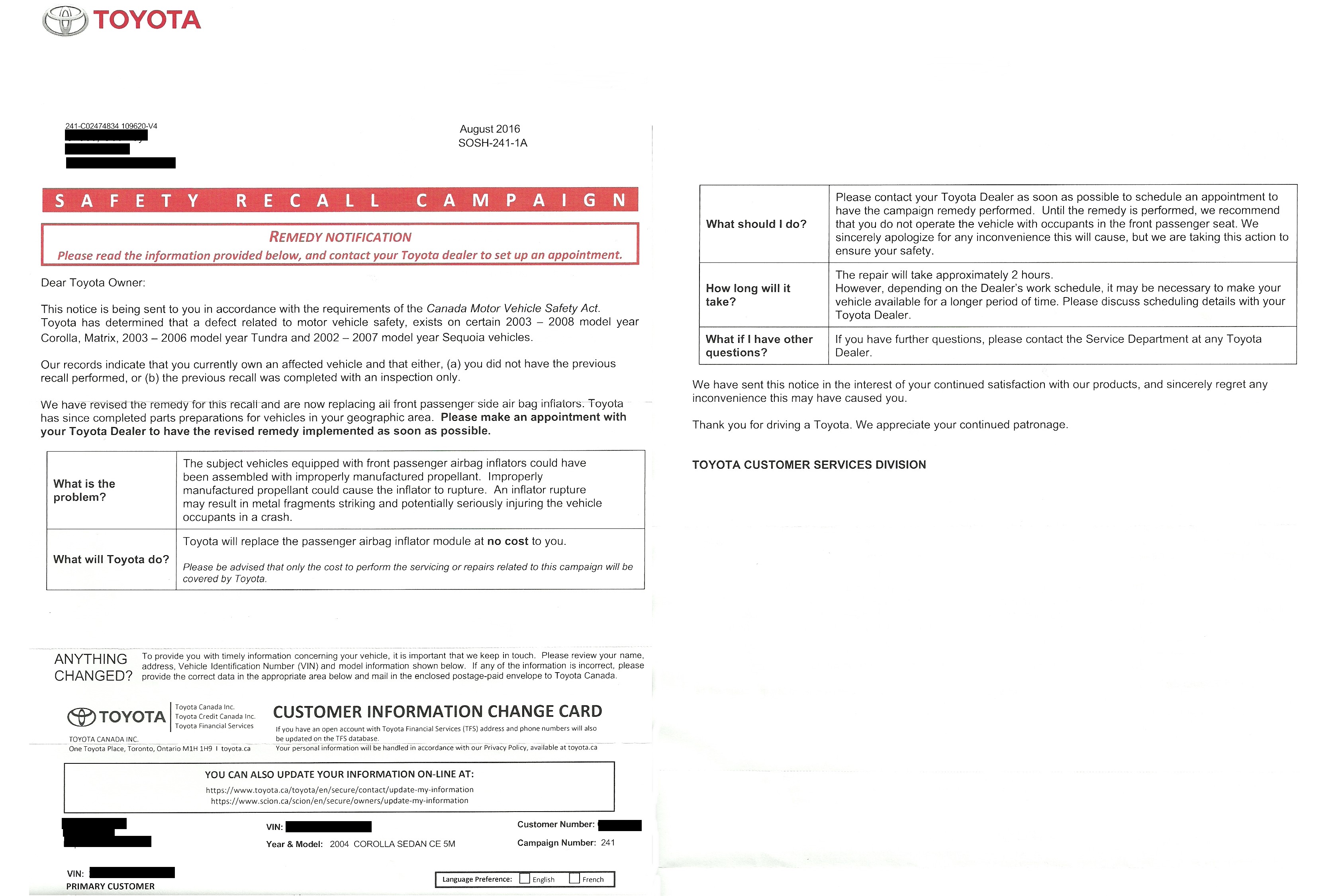 Although each manufacturer sends out its own notifications, recall letters all contain the same information. They must tell you that your car has been recalled; explain the problem and solution; tell you how to get your car fixed and how long the repair will take; and let you know who to contact if you have further questions.

Transport Canada suggests registering your used vehicle purchase with the car’s manufacturer, either directly or through one of their dealers. This guarantees that you -- and not the vehicle's previous owner -- will receive any future recall notices.

Don't be left feeling used
One of the first things you should do once you get your new-to-you car home is check for any outstanding recalls. Transport Canada's recall database will show you if your year, make and model of car or truck has been recalled. However, because many recalls only affect a certain number of any given vehicle, some manufacturer websites have a page where you can enter your car's vehicle identification number (VIN) and find out what recalls, if any, apply to your specific vehicle.

If the company that made your car doesn't have a VIN lookup on its website (here's a list of those that do), then pay a visit to a dealer. The service department staff will punch your car's VIN into their computer database and see if there are any outstanding recalls.

My car has been recalled! What do I do?
Call or visit your dealer to make an appointment with the service department to have the work done. Many recalls require the replacement of a part whose design has been found to be faulty with a redesigned component, and in the case of a recent recall, dealerships may not have received their stock of redesigned parts when you're notified of the recall.

With an older recall, a dealership may have to order that revised part. If that's the case, the service department will tell you when they expect to receive the new part.

Many recalls on modern vehicles are electronic in nature and involve the reprogramming of a computerized control unit. Even though no physical parts have to be changed, the dealership can only make the repair once they receive the new computer program from the manufacturer.

Just as with any repair or maintenance work, you'll leave the car at the dealer, they'll do the work and give you a call when your car is ready to go.

Sometimes, manufacturers conduct voluntary recalls based on their own investigations into consumer complaints and warranty claims. That's what Mazda did at the beginning of this year after it discovered cases of an occasional lack of power under specific conditions. 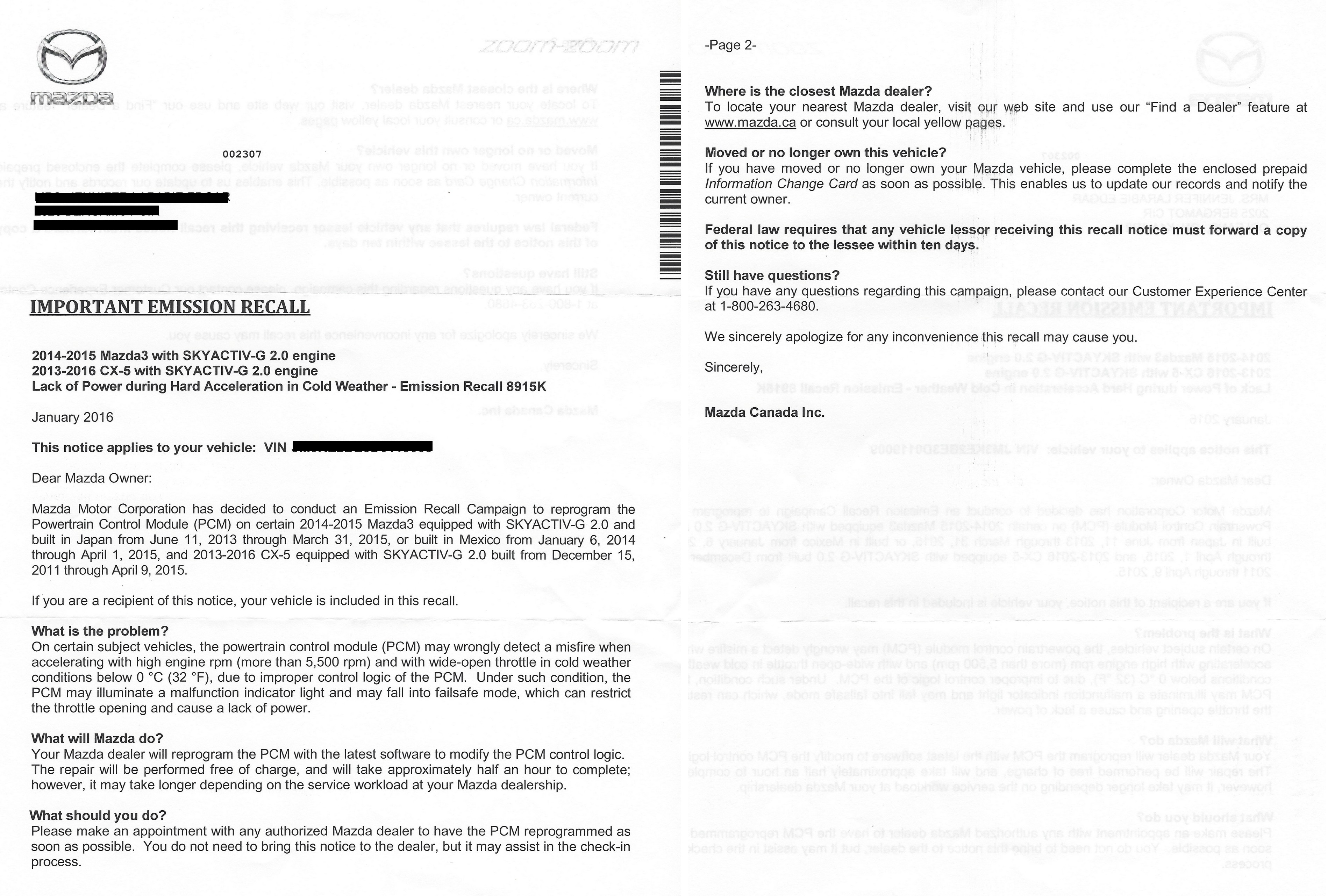 Who pays for the repairs?
In the case of a safety recall, the manufacturer always covers the cost of fixing your car, regardless of your vehicle's age, mileage, and whether it is still under the factory warranty.

Should you stop driving your vehicle?
Unless the recall notice explicitly recommends doing so, no. Most recalls are conducted to inspect a group of cars for a possible defect, and it's very rare that an automaker and/or Transport Canada will advise against driving the vehicle.

Transport Canada does, however, urge vehicle owners "to have any recall repairs that may apply... carried out as soon as possible after receiving notification of a defect. Vehicle owners have a responsibility not only for their own personal safety, but for that of their passengers, subsequent owners and other road users."

You can also participate in the recall process by filing a complaint with Transport Canada if you feel your vehicle has a safety-related defect. If your complaint is echoed by a large enough number of other owners, Transport Canada will investigate and determine whether a recall is warranted.

Given how much many Canadians rely on their vehicles, recalls can be a pain, not to mention scary, in the case of more serious safety concerns. But ultimately, Transport Canada's recall regulations play a major role in keeping our highways safe, and getting your car fixed for free is a small price to pay for that reassurance.