"Yeah, this exact road is right behind my house. But why are there $%&* palm trees?"
"Oi, you can't drive on the beach there – that's a bloody national park!"
– Jacob Black, automotive journalist, nature conservationist, Australian

Forza Horizon 3,  the latest instalment of Playground Games' open-world racing series, takes place in Australia. Naturally, we turned to our resident Aussie for his take on the virtual Land Down Under. Unfortunately, the running commentary was deemed too exuberant for publication, but rest assured there was plenty of praise for the game, and plenty more trash-talk aimed at the computer-controlled cars. (If BMWs could blush...)

Welcome back to Horizon

Players return, once again, to the Horizon Festival. If you’ve played the previous instalments, you’ll feel instantly at home with the interface and core gameplay, which carry over from FH2 with a light refresh. When you're tackling events, you'll again be treated to banter between two of the festival organizers – a new version of the smooth-talking bro (“Lamborghini Ch-entenario”) and an executive assistant who sounds like Byron Bay by way of L.A. Pause the game and you'll find the same wall of tiles as other Forza titles. Outside of races, you'll be looking for small billboards to smash, mouldering cars in rusty barns and wide, open spaces to do doughnuts in. If you'd rather spend time indoors, the tuning and customization features continue to reward players who sweat the details. 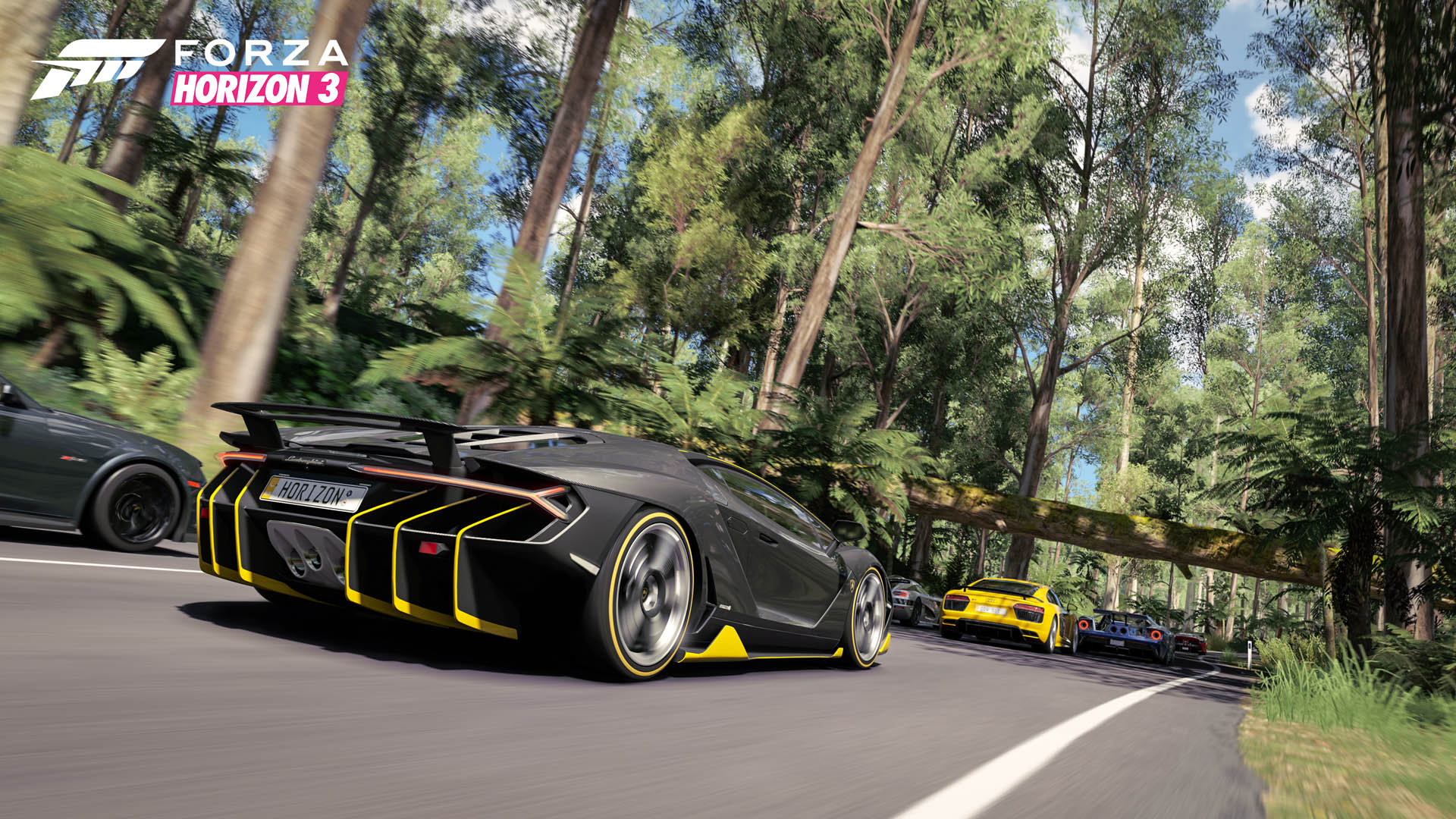 Let me elaborate: while Forza Horizon 2 featured plenty of off-roading (which was also the main focus of the Storm Island expansion) the Australian terrain showcased in this game lets you go from asphalt to open fields to ravines within seconds. If you want to stay in the rough stuff, you can drive clear across the map without encountering more than a handful of things that can be classified as “infrastructure”. If you prefer street racing, there’s also a sizeable urban area with actual skyscrapers, so you can indulge in some performance tuning without worrying about beach sand handling. Kind of, because as Jacob is quick to note, the developers have taken some liberties with the geography. (Though apparently there are actually palm trees in Australia.)

Meanwhile, members of the PC Master Race can finally enter the fray with the Windows 10 version of Forza Horizon 3 and face off against players on both PC and Xbox One. (Thanks to the Xbox Play Anywhere program, if you pick up the digital edition of the game you’ll get both the PC and console versions.)

But other differences emerge as soon as you start playing: the overarching narrative of the Horizon Festival remains the same, but this time you're the person in charge. And one of your first decisions is choosing a name and avatar: Scruffy McBrodude from Forza Horizon 2 (sadly, not his official name) is joined by a host of fresh-faced twenty-somethings, who can take on such names as "Dave" or "Anna" or "Bantasaurus Rex". The full breadth of your powers is gradually introduced as you complete events – from picking which radio stations to sponsor, to designing your own racing events. 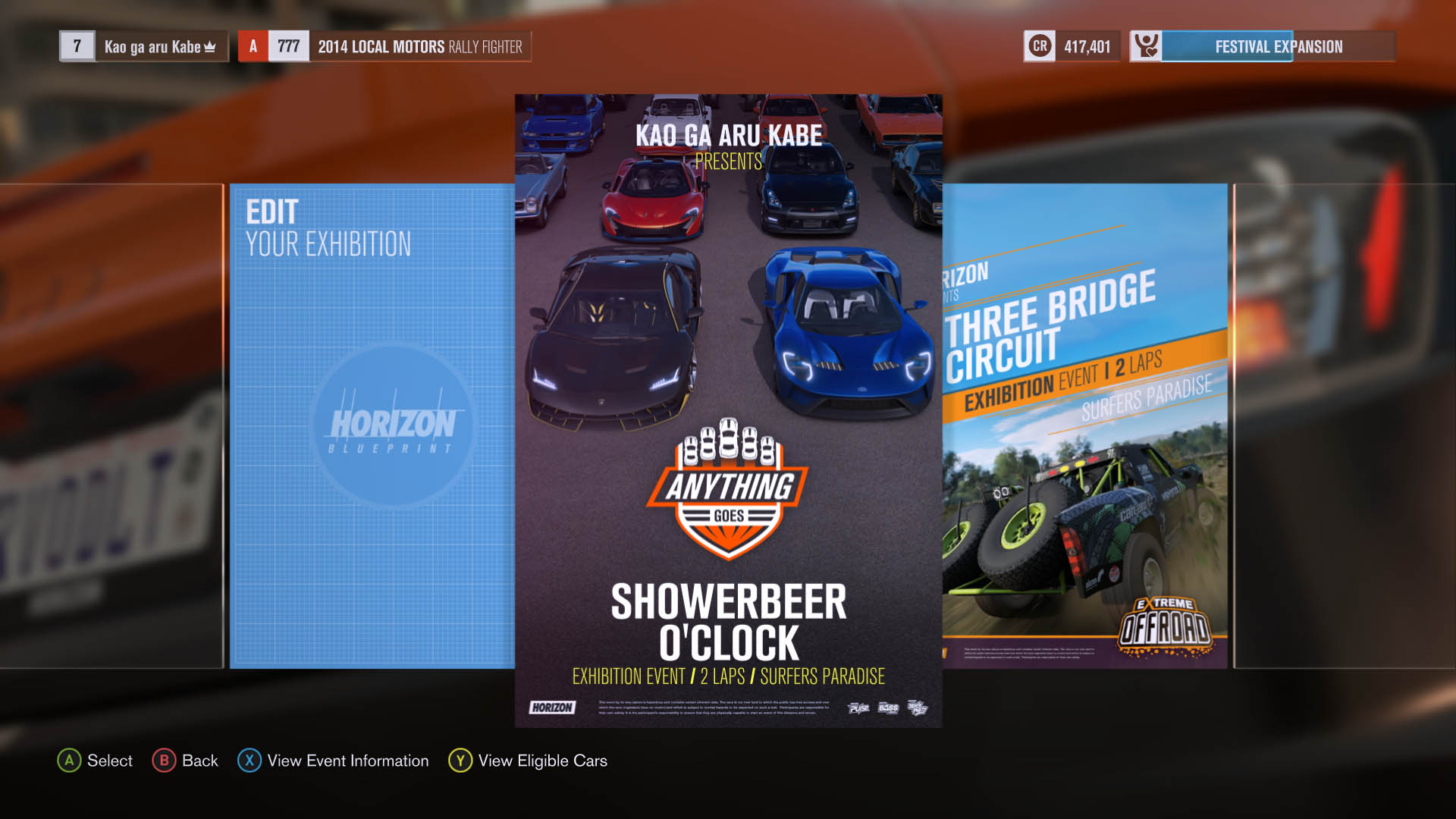 Whether separately or together, we'd ask that you have your shower and beer after the race.

Making its debut is the long-awaited ability to complete the campaign in co-operative mode. After you complete the initial area, which serves as a tutorial, you can link up with up to three other friends online and complete all subsequent events together. Are you good at cross-country events but have a buddy who's better at city circuits? Pool your talents and dominate the field.

Of course, you don’t need to go online to join up with a crowd of fellow drivers. The new Convoy mechanic allows you to recruit almost any Drivatar you see running around, who’ll then follow you wherever you go, occasionally revealing secrets on the map or challenging you to impromptu races. It adds a bit of flavour whether you’re roaming off the beaten path or sprinting from one event to another. Watch out for those sudden stops though, or you’ll have the better part of your convoy piling onto you like you’re in a ruck in rugby (I’m told this metaphor makes sense to Australians).

If you live and breathe online, however, you’ll want to stay on top of the weekly Forzathon events, which offer a variety of prizes for drivers of all skill levels, including rare vehicles you can’t normally get in-game. 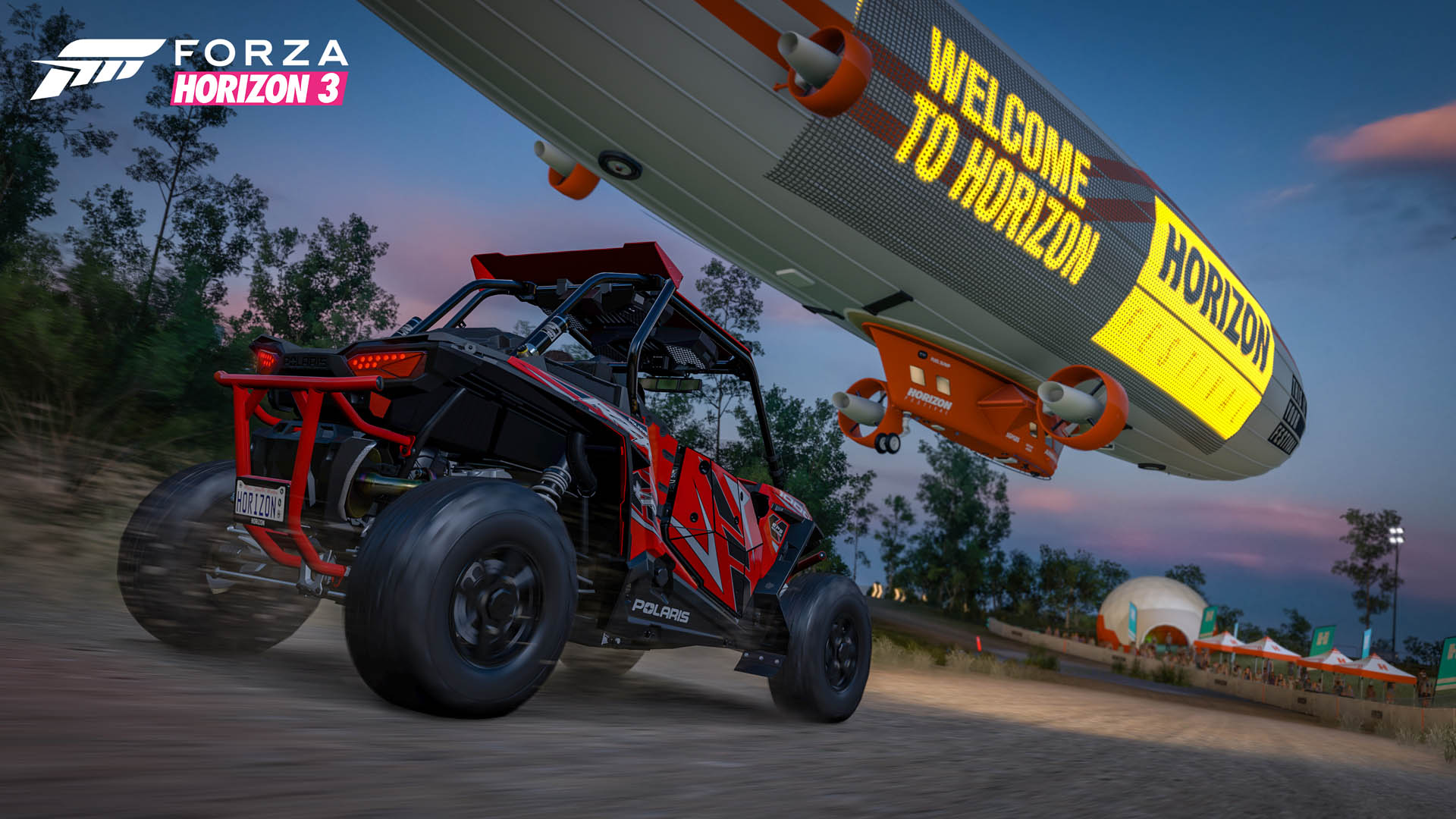 If you’ve ever played a Forza Horizon game, you’ll know the main draw is freedom. The freedom to explore. The freedom to complete events in the order you chose. The freedom to choose style over outright speed – you can actually out-earn the first-place winner if you complete a race with no crashes and rack up a long skill chain. There’s so much to the game that almost anyone can find something they’ll enjoy.

Add to that the absolutely visceral feel of rocketing around the Australian landscape, with the Xbox controller offering feedback on the terrain you’re travelling on and communicating just how perilously close you’re coming to losing traction. Even if you have a racing wheel, give the controller a try; you may be surprised by tactile it is.

The game’s graphics and performance continue to impress. The terrain is painted with saturated colours, cars are defined with sharp lines and muscular curves. The anti-aliasing is superb, with nary a jagged edge on the vehicles or landscape (very thin lines, like power lines, can sometimes be blurred out of existence, however). The framerate is a buttery smooth 30 fps on the Xbox One (Windows 10 players can find the minimum and recommended specs at the bottom of this page), with the only blemish to the presentation being the pop-in of distant objects, but the terrain is generally hilly enough that it is nearly undetectable at speed.

In addition to the outstanding core gameplay, there are a few tweaks under the hood that improve the overall experience.

Players without the Kinect peripheral can now summon ANNA, Forza Horizon's GPS/computer co-pilot, via the directional pad on the controller. It’s a small interface change, but it means you're never more than a few button presses away from figuring out your next destination, which can be a daunting task given the massive amount of content in this game. 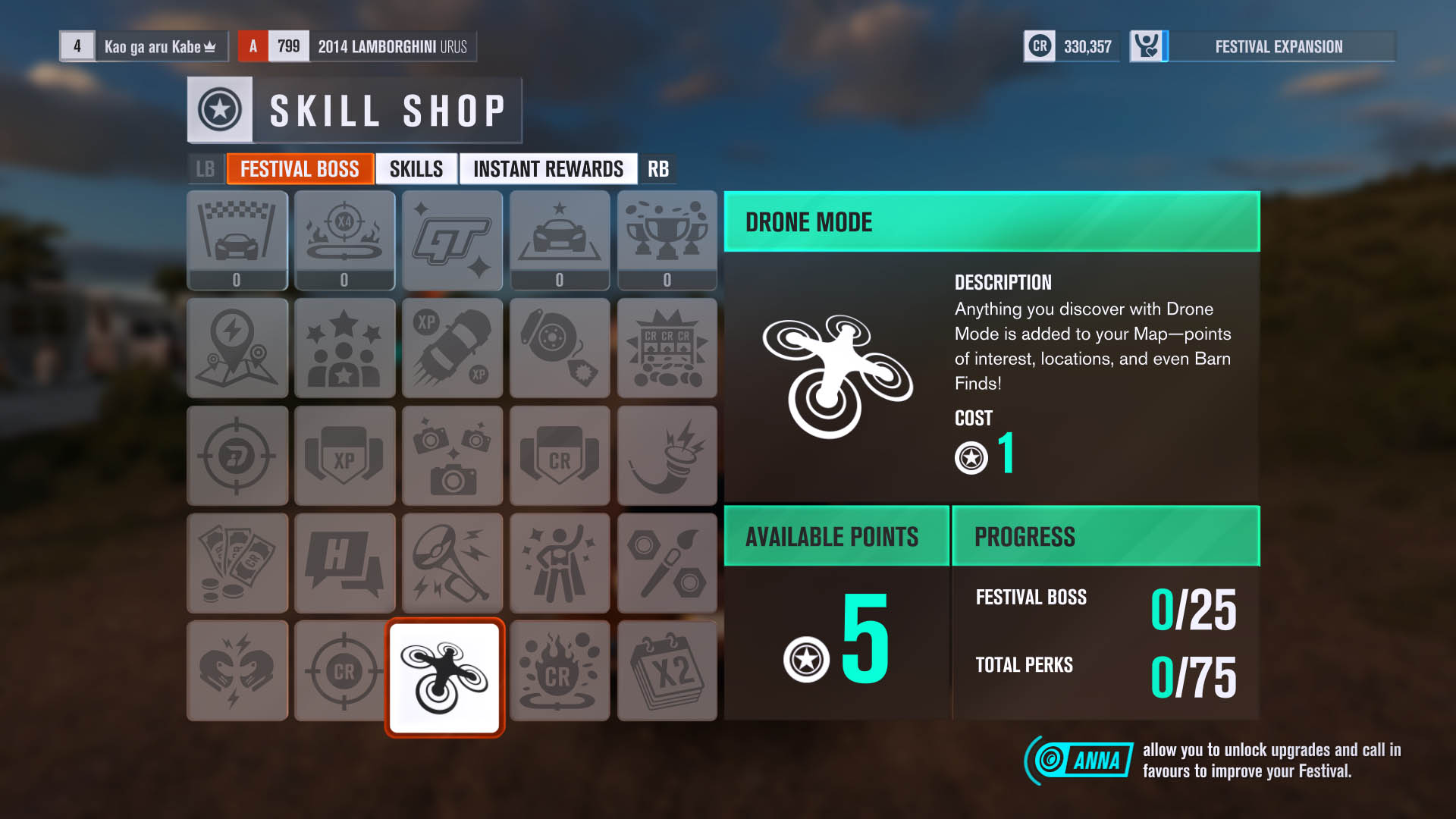 Helping you discover that content is a new Drone mode. While it functions essentially as an untethered camera, it allows you to explore the environment without worrying if your current car might get stuck on some rocks (by the way, if you ever get your vehicle stuck, pause the game and press in the left thumbstick to reset your vehicle position). Any items of interest are flagged on your mini-map so you can return to it for collection. Curiously, Drone mode doesn’t offer the same camera options as Photo mode, but you can make use of the Xbox’s built-in ability to record video clips and take screenshots.

If you want a closer look at your vehicle instead, you’ll appreciate the debut of Forzavista mode on the Horizon series. While many, many cars have received the Forzavista treatment – exquisitely detailed exteriors and impeccable, high-resolution interiors with functional dashboards – a setting to examine them in detail was absent from the Forza Horizon games until now.

While you’re in the garage, you may notice a new tab for the auction house. Players can now place their prized rides up for sale. It could be a rare performance machine, or it could be a heavily customized cruiser, you’ll find all sorts in the auction house. If you’ve been lusting after a particular vehicle, but haven’t been able to find it at the autoshow, the auction house may be your best bet. 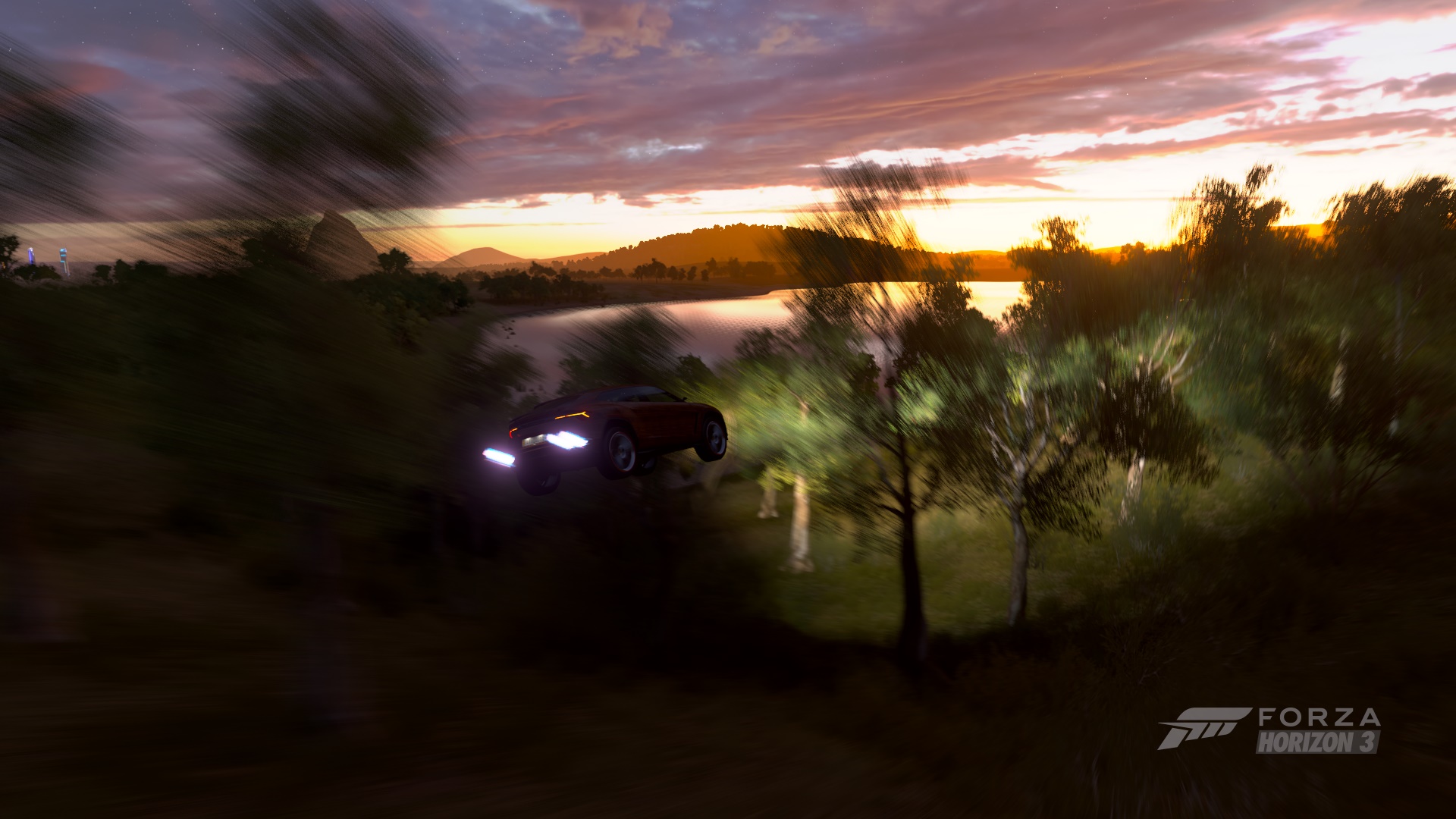 It’s a perennial complaint from me, mainly because I’m absolutely terrible at not running into things – especially trees and fences. Just about everything in the environment is destructible – telephone poles, billboards, lush Australian vegetation. Even smaller palm trees are no match for the bumper bars of your dune buggy. But run into one of a couple types of deceptively slender trees and you come to a dead stop, breaking your skill chain and most of the front end of your vehicle. You'll learn to identify them, of course, but at speed it's almost impossible to tell until it's too late.

The same goes for fences: Metal chain-link affairs meant to keep people out of the satellite dish installation? As solid as cardboard. Chest-high wooden planks around a rural property? As tough as a wool scarf. But a knee-high picket fence around an urban home? Like sending a toddler against a phalanx of rugby players.

It’s not so much that some fences are solid, but that you’d expect them to succumb to the gentle persuasion of two tons of German engineering travelling at highway speed; after all, the neighbour’s did. It’s immersion-breaking in the same way as invisible walls (except, well, I guess these walls are visible). Yes, I realize this is a game that lets you drive away from a full-frontal encounter with a cliff face, but it’s about consistency.

Perhaps a more valid complaint has to do with the stunt challenges, which usually has you attempting to rack up a certain number of points using a particular skill. The challenges are set in picturesque locales, with a beautiful vehicle well-suited to the task, but the instructions can be vague. For example, Bucket List Challenge #3 tells you to “Drift around a night time paradise in the Nissan GTR ‘17”, but it doesn’t actually tell you what qualifies a drift (as far as I can tell, the game defines drifting as going sideways above 85 km/h). It also starts you off in a parking lot, which might give you the impression that you must complete the challenge within this “sandbox”. It’s a strange oversight in a game that is otherwise quite beginner-friendly.

Is it for you? 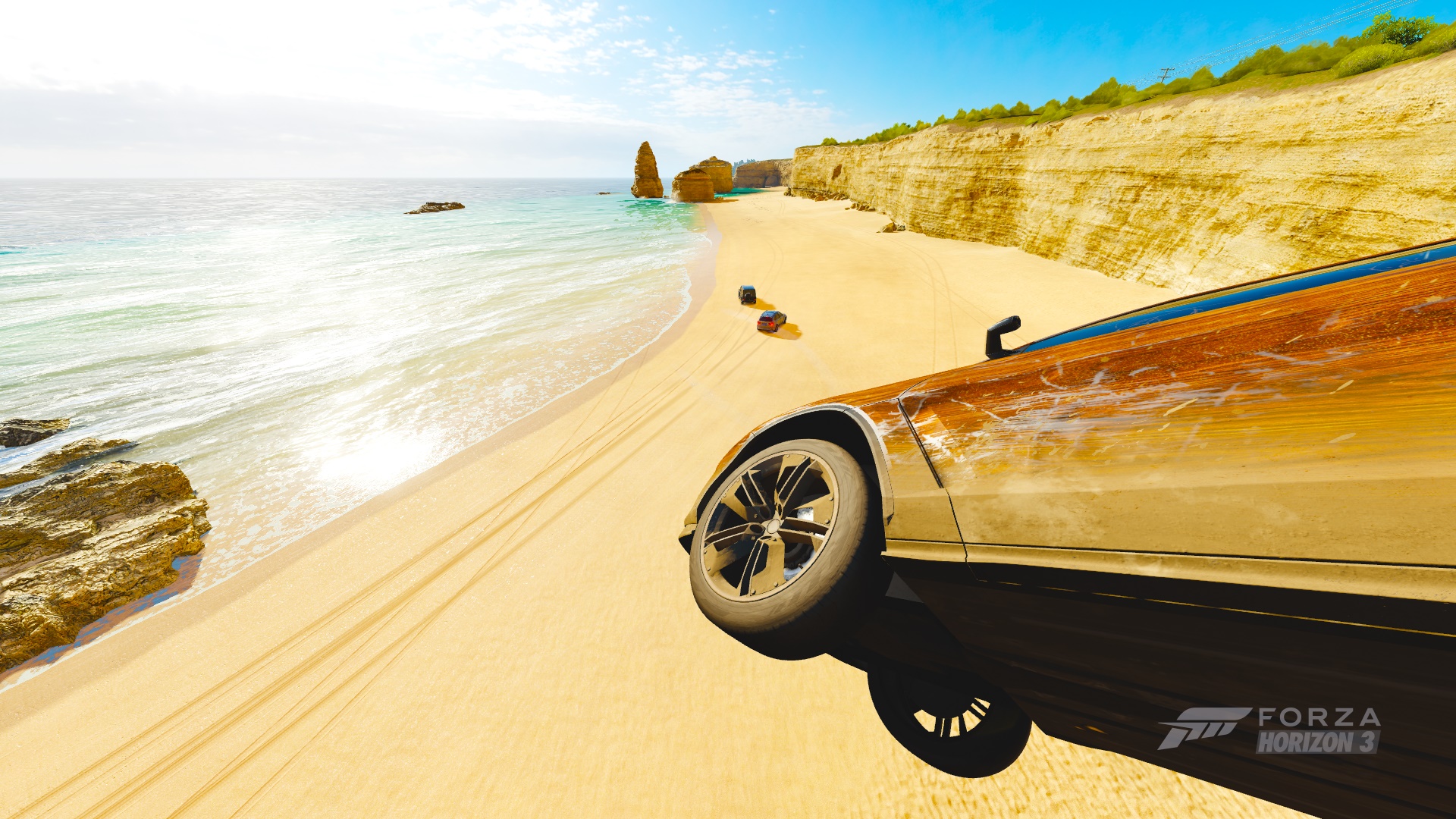 Sunny, with a chance of meatball

Racing games are generally competitive, to put it lightly. Even cartoon-y games like Mario Kart can require a significant investment of time to master. Facing off against other players online can be a daunting exercise because there is often a wide gulf separating the players, be it in game experience or in hardware setup. The balance favours those who have the resources to dedicate to the pursuit of the fastest lap time, which is the ultimate metric that determines the outcome of every race. There’s a perceived barrier to entry that keeps many players from venturing online.

I’m a giant fan of the Forza Horizon series precisely because it’s not like other driving games out there. It has a deep multiplayer component that operates even while offline, while online interaction takes many forms, from sharing your vehicle customizations to participating in cooperative campaign events to, yes, challenging others to head-to-head races.

It's a game that rewards expertise but welcomes everyone. You can hand someone the controller, show them what all the buttons do, and away they go. It’s the rare game that I can recommend without reservation because you go at your own pace, doing what you want to do, when you want to do it. It’s the perfect expression of an open-world game.

Just one thing: if this is Australia, where are the damn kangaroos? Seriously, if you find one hopping around, send me a screenshot, because I’m pretty sure the one you see in the opening sequence with the Centenario is the only kangaroo in the game.

Forza Horizon 3 is now available on Xbox One and Windows 10. This review was conducted on a Xbox One console.