You can standardize features, not safety or sense
Advertisement

You can standardize features, not safety or sense

The Koreans and Americans kicked it off. With manufacturers like Kia and Chevrolet jamming heaps of safety features (and luxuries) into their standard packages, Toyota recently introduced Toyota Safety Sense (TSS). It’s a suite of interventionist technologies to be included in the majority of Toyota models from 2017 on.

Translation unpacked? Nearly half the drivers out there think advanced (aka shiny-and-new) safety features can do the driving and stopping for them. Faith is a funny thing. The argument goes, believe something enough and it will come to be. The only trouble is, that’s wrong!

Nichols’s is a familiar refrain. On the surface he gives sensible advice: You are the best safety technology in any car you drive and nothing can replace your utter attention.

However, secondarily, declaring that these safety techs are not replacement – that is, they are not some robot driving for you while you floss in the rearview mirror or check how many likes your water-skiing squirrel GIF is earning – Toyota openly shifts any question of ultimate responsibility for your safety from their shoulders to yours.

As it should be! It’s just that Nichols said it. He said to think of Toyota as your “partner in safety”. Smart positioning, that. Nothing is idiot-proof. And with over 150,000 vehicles enhanced with TSS predicted to be sold in Canada over the next year alone, that’s a lot of potential idiots.

Other manufacturers parrot that refrain. The PR team at Tesla, whose safety tech even bears the troublesome, black-and-white moniker Autopilot, constantly repeat the same mantra: Safety tech is not a replacement for your participation behind the wheel. Yet 40 percent of people aren’t getting the message. Facts don’t matter to the invincibly ignorant. 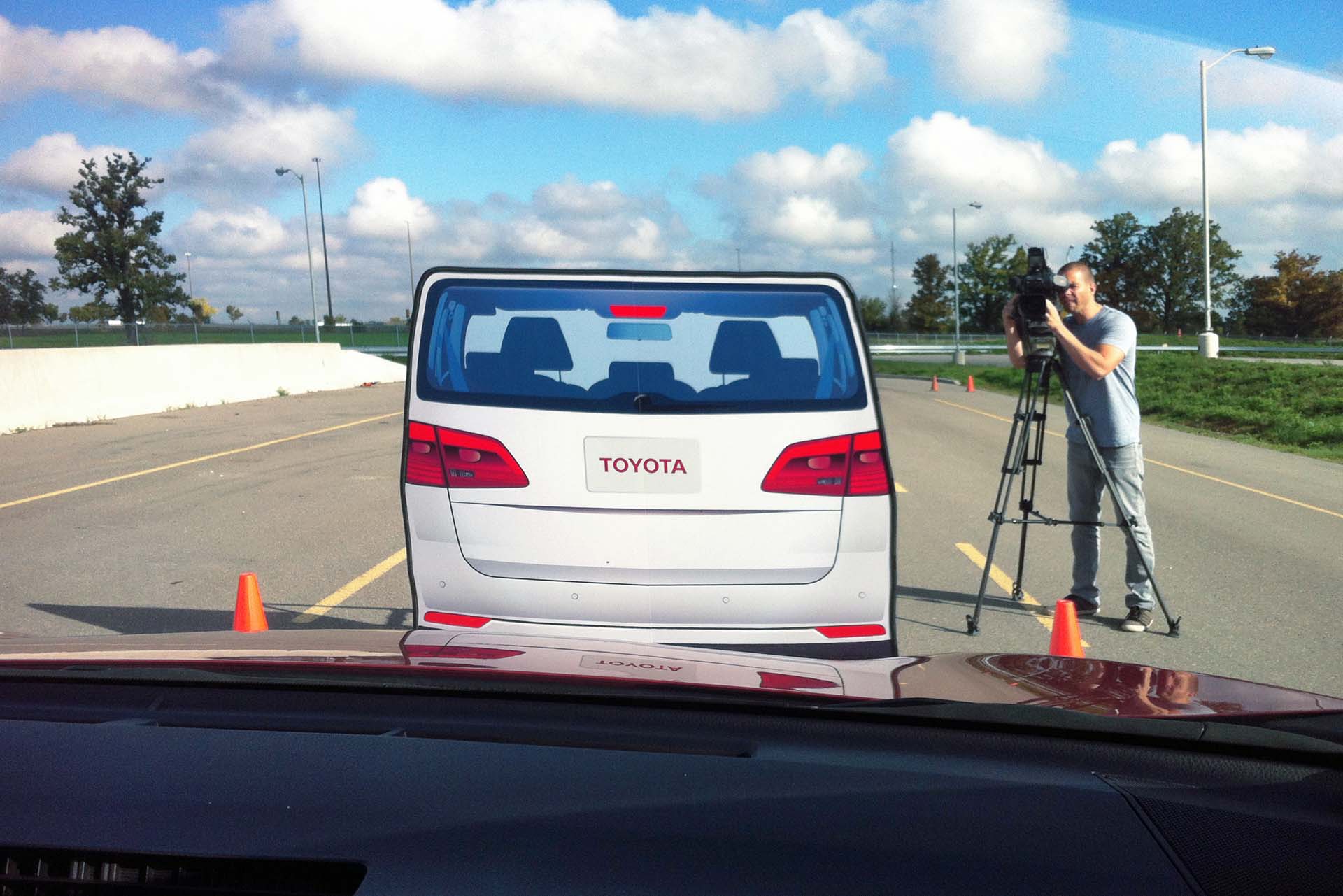 The Pre-Collision System “mitigates” forward collisions with sonic warnings and automatic braking “for possible collisions with a preceding vehicle.” (Another careful word: “mitigate” means “to make less severe”, not prevent, think or operate.) At speeds of between 16 and 140 km/h, driving straight at a big solid object, you first get the noisy warning. If you then apply the brakes, and are travelling between 30 to 80 km/h, you may get a “pre-collision brake assist”, which increases braking force relative to your pedal input. It’s a soft intervention for drivers who realize the danger but may underestimate the braking distance required.

If you move closer to the unintended target without applying the brakes, automatic emergency braking kicks in – provided your speed is between 10 and 80 km/h. (At 80, perhaps even as slow as 35 km/h, you’re going too fast to be stopped and the tech will only mitigate damage. Blame physics, not Toyota.) Depending on weather, road and tire conditions, the emergency braking could slow you down by up to 30 km/h.

Lane-Departure Alert helps drifting drivers stay in their lane at speeds of 50 km/h and higher. We’ll talk more of this below. 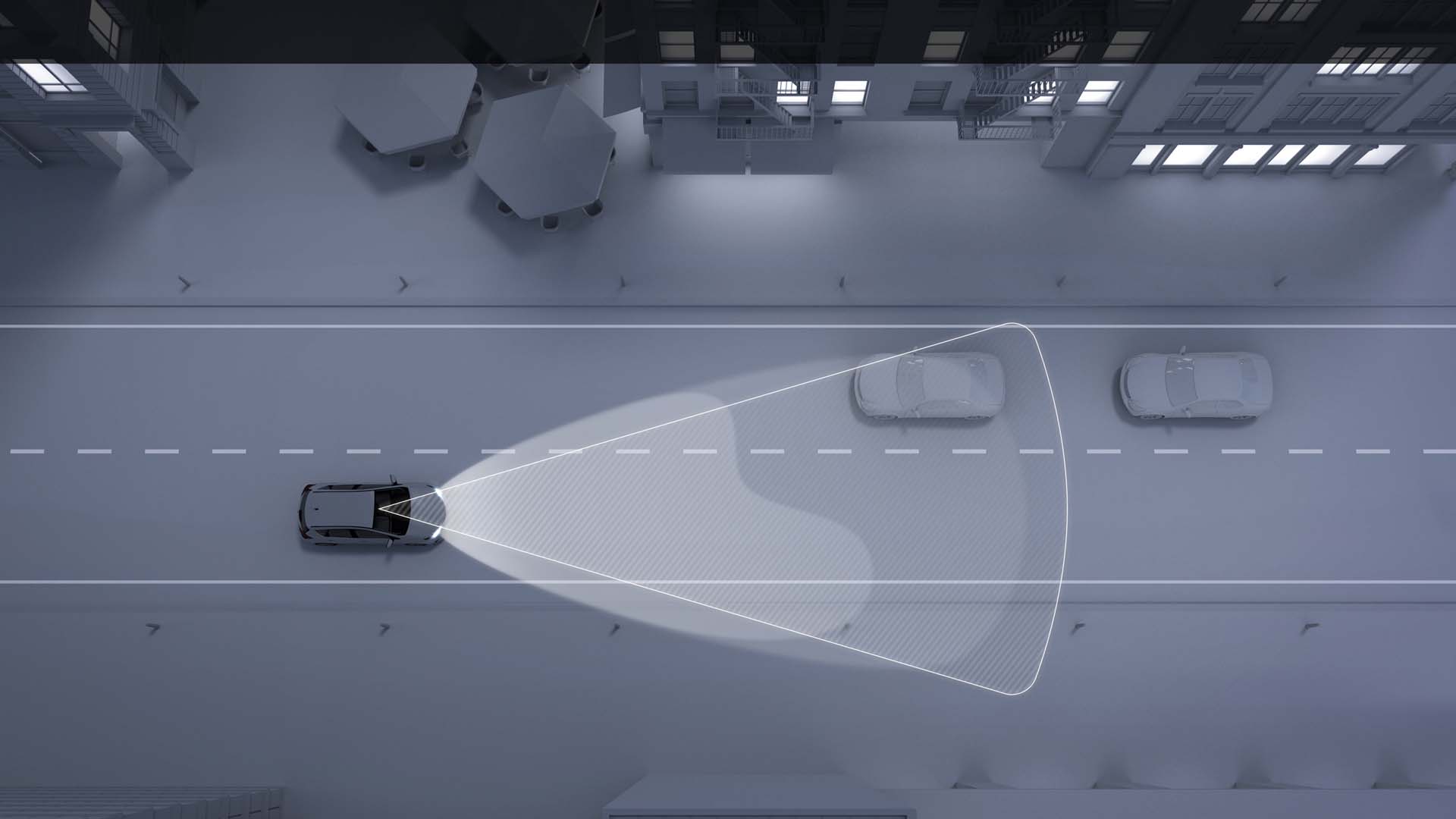 The Automatic High Beams feature “improves night-time safety.” At speeds of 30 km/h and higher, it automatically switches between high and low beams at night. Who cares? In the city we rarely experience genuine darkness. But even familiar country roads in the dark can disorient us, if only momentarily. But that’s often time enough for really bad stuff to happen.

Anyway, automatic high beams are all fine and dandy for the pitcher, but what about the catcher? A camera detects approaching cars and the computer automatically shifts the highs to low beams. So it mitigates the potential for you to become the jerk who shines lighthouse beams into our eyes on hills and curves.

Why focus on those three specific techs? According to Terence Chu of Toyota University, the three most common issues surrounding collisions are driving head-on into solids, unintended lane departures and night-time visibility. That is: 1) the driver ramming something straight ahead of the vehicle 2) the driver not noticing he’s leaving his lane and 3) the driver not being able to see in the dark. Note they are all driver issues. No wonder 40 percent of people want to believe the tech replaces the driver. It’s needed.

The point? With a little extra guidance and partnership from TSS, you are better equipped to avoid collision.  However, above, you read that there are four safety techs.

Safety “for all”, yes, but TSS is still tiered.

There are actually two TSS’s: TSS-C, for car, and TSS-P for car and pedestrian. So TSS-P includes all of the former but further enhances your partnership in safety.

TSS-P’s Dynamic Radar Cruise Control is fairly common throughout the automotive world these days. Activate cruise control and it detects the speed and distance of the car in front of you, adjusting your speed and distance safely. So say you set it for 120 km/h but some bonehead pulls in front of you and shifts to 90. It slows you to their frustrating torpidity. This feature can be frustrating because it also maintains the distance you functionally agreed to when activating it. So aggressive drivers may sneak into that space in front and slow you further.

2) TSS-P also enhances the aforementioned Lane-Departure System with Steering Assist. It will intervene and keep colouring between the lines in case your attention wanders and the vehicle follows. For some drivers, having a computer re-point them can be disconcerting, even annoying. So you need to activate (or de-activate if you’re a second driver) this function with a touch of the button on the steering wheel.

3) Finally, TSS-P enhances the Pre-Collision System with its extra “eyes’, searching out and detecting not just vehicles ahead but pedestrians. Hence the name, Toyota Safety Sense – Pedestrian. 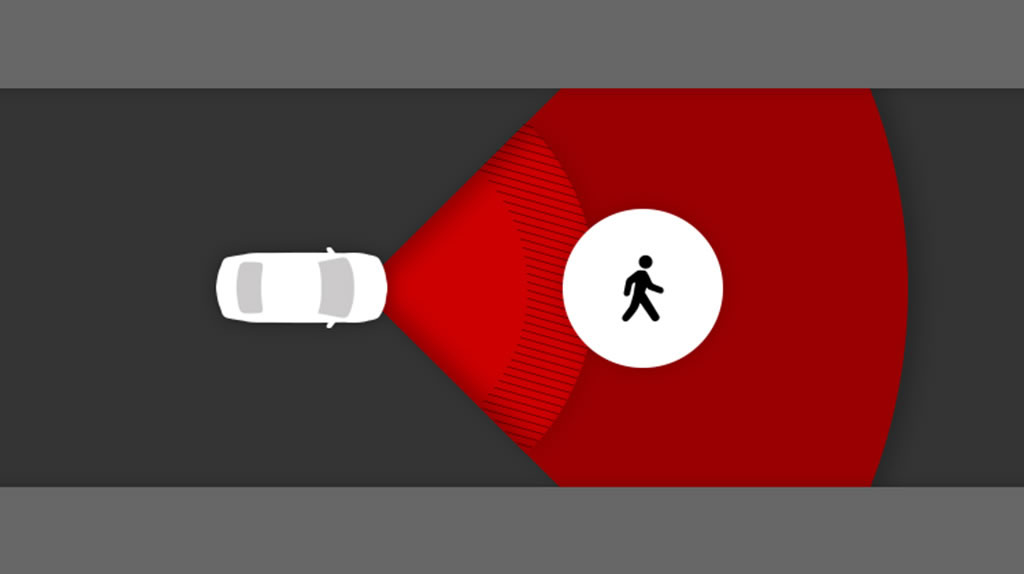 Toyota Canada hosted the TSS launch event at a firefighters’ training facility in Mississauga, Ontario. For realism, the space has facilities for simulating emergencies: a small neighbourhood of streets with stop signs, buildings that can go aflame, even a rail tanker on tracks.

To nail the safety message home, they staged a simple but effective collision course beside a haunting burnt-out hulk. (That is, the remains of a building where there’d been a fire, not an over-exposed superhero.) Carefully coached, we drove without braking at 30 km/h directly at a cardboard cutout of a Toyota-branded minivan, solid-looking enough to a radar system. The automatic emergency brake worked each time, completely halting us several inches from the “van”.

Next we drove north, sampling TSS in 2017 Corollas. 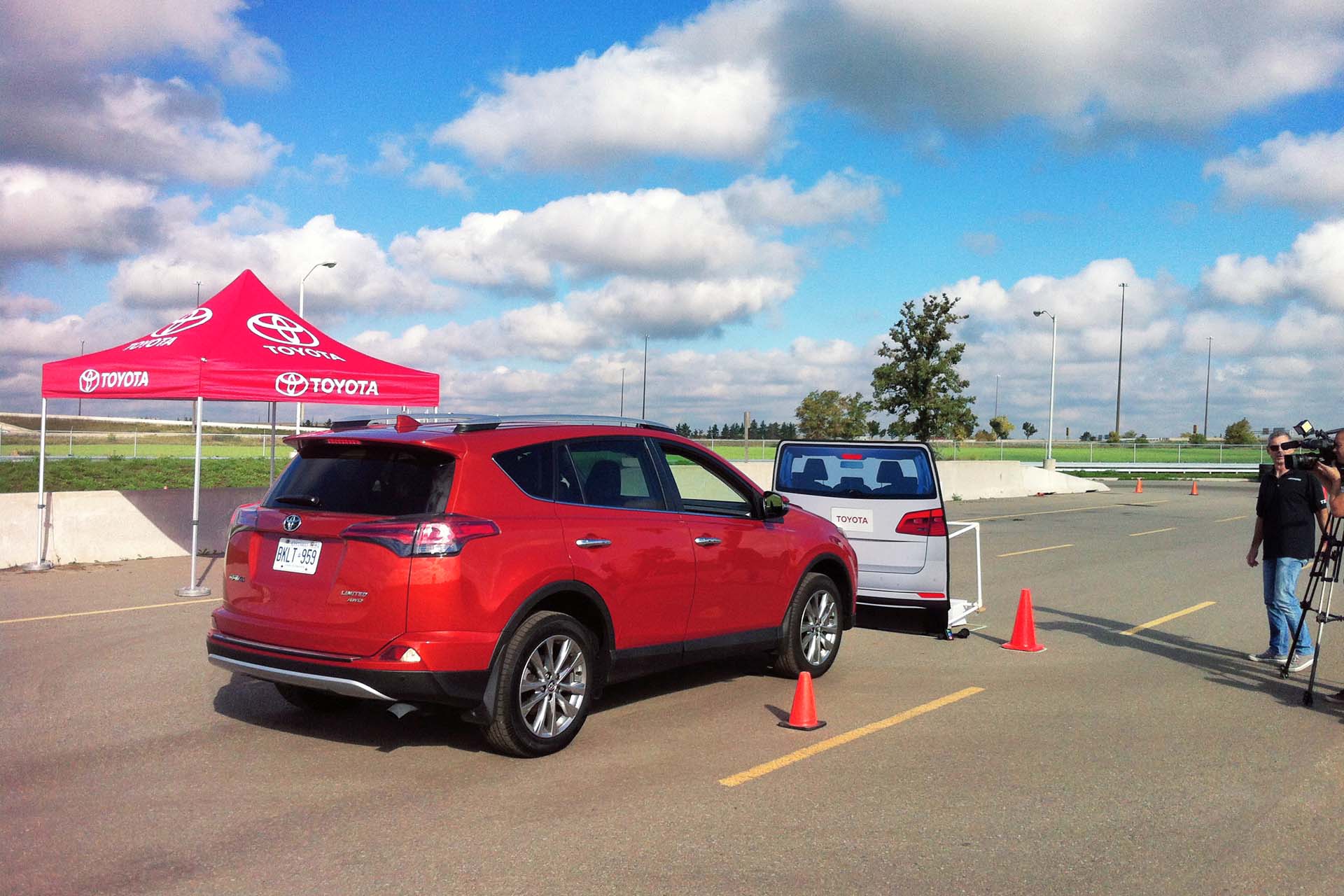 As with most press events, there was a test drive where we team up for the day with other attendees and take turns piloting and navigating. In the morning, Alphonso (not his or her real name) and I drove a new Corolla SE in vibrant blue. Toyota offers an optional continuously variable transmission (CVT) but we voted for the standard six-speed manual (because it was there and) to milk the most from a diminutive 1.8L four-cylinder engine that achieves a heart-stopping 132hp at 6,000rpm and 126 lb-ft of torque at 4,400! Yes, that’s not much power and we’re both strapping ladies. Luckily, much of our drive route was through sections of the scenic Niagara Escarpment, where speed limits are severely curtailed and closely monitored by greedy police waiting to pounce. So there was no need to tax the engine on the steep grades.

What’s new for Corolla beyond TTS? The latest SE has distinct new designs for the head and taillights, differentiating it sharply from CE and LE trims. Inside there’s a redesigned instrument panel.

Safety and power aside, the Corolla is still rather fun to drive with the standard transmission and does nicely in tight spaces like those in the centre of Elora, Ontario, a picturesque village pickled in Victorian times. Many of Elora’s sturdy stone buildings predate cars and traffic. Sequoia and Tacoma drives probably wouldn’t stop here. 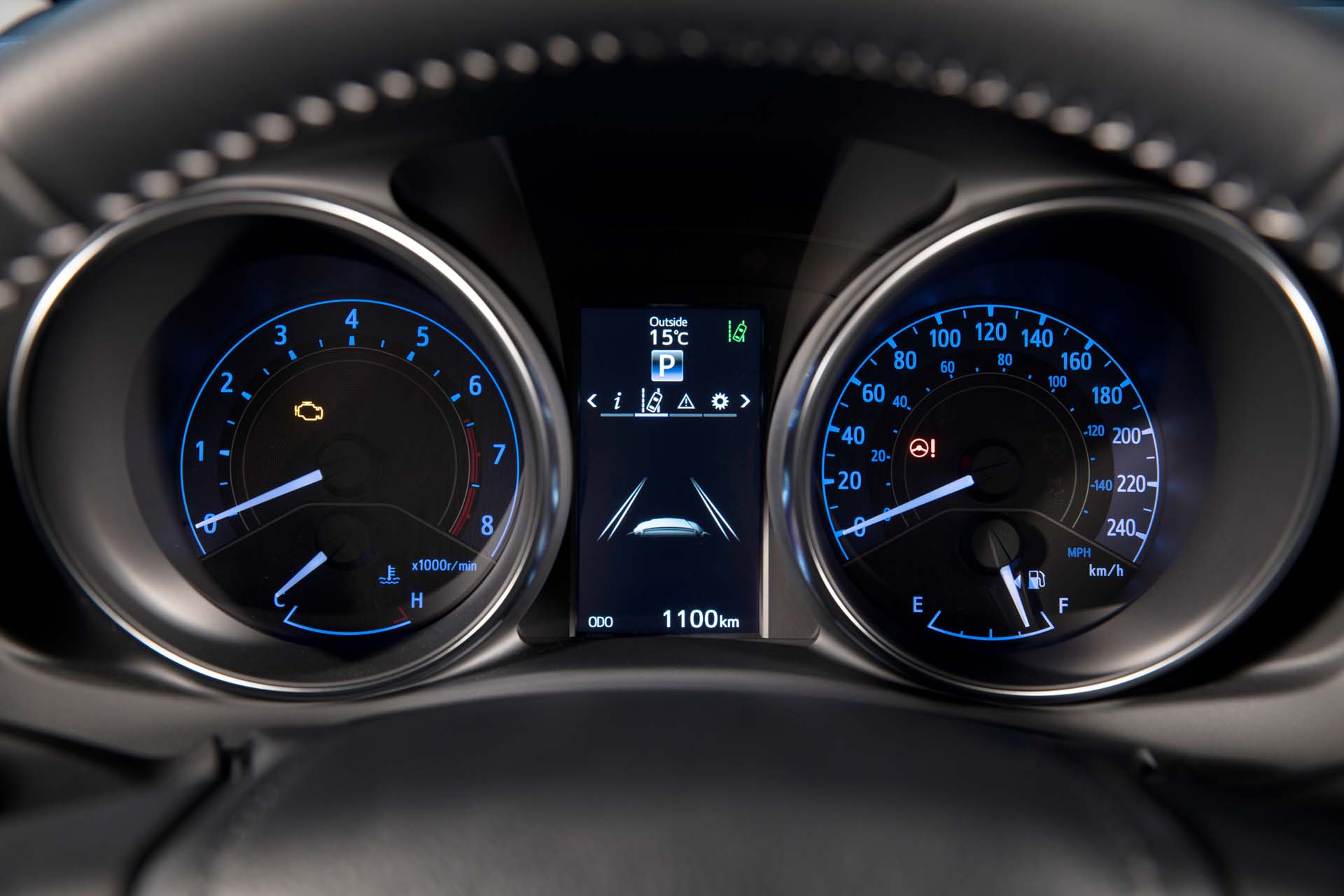 In the afternoon, we returned to town in a silver Corolla iM. (There are always plenty of silver ones to choose from. We Canadians love silver.) The iM is a cute hatchback, a scion, so to speak, of the former Scion brand, which was phased out after 2016. Our tester had the CVT, meaning no stick and less fun. Consequently it did feel safe, what Toyota would want.

Welcome standards included leather-wrapped steering wheel and gear shifter, heated and easily adjustable seats and, speaking of adjustable, telescopic steering wheel with all the important gadgetry literally at hand. (We didn’t use the heated seat option. It was a warm day but as any Canadian fanboy knows, “Winter is coming.”)

Finally, the Corolla provides what has become a standard price of entry for anyone who drives in cities, a backup camera. Most manufacturers don’t consider it a safety feature, but I can’t think of a more useful tool in parking lots, garages and alleys. That’s where I do at least 40 percent of my most ignorant driving and I’m probably not the only one. How Could This Have Ended Badly? Let Us Count The Ways Dashcam: Another Day Spoiled on the 401

Toyota Prices Refreshed and Safer 2017 Corolla
How Far Can You Go on an Empty Light?