The chrome is bright, but the lights can be shadowy.
Advertisement

The chrome is bright, but the lights can be shadowy.

Just in time for the short, dark days of fall and winter, the Insurance Institue for Highway Safety has given a dim rating for pick-up truck lighting. In testing of 2016 and 2017 models, only a single pickup scored a "good" rating when it came to headlights.

The IIHS has already tested midsize cars and small SUVs, and the newest test covers mid and full-size pickups. As with the first two groups, results are disappointing. The only truck to score a "good" rating is the Honda Ridgeline, and only in RTL-E (Limited in Canada) and Black edition trims. Those trim levels have an LED low beam lamp. Only one truck was rated as acceptable, the GMC Sierra, and again only in certain trims. The other nine trucks tested ranked a failing marginal or poor.

Even the best-selling pickup, Ford's F-150, did not fare well. The IIHS called it "among the poorest performers." Even with optional LED low beams, the visibility was deemed to be inadequate. 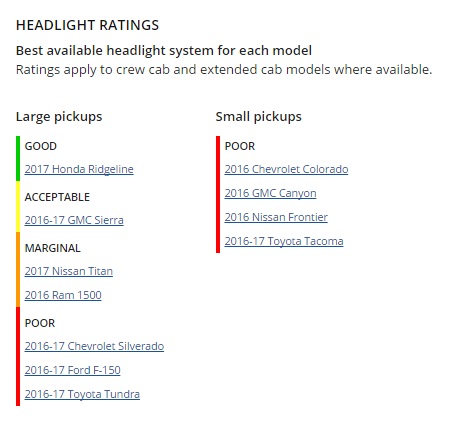 The IIHS says that the worst of all trucks tested was the Chevrolet Colorado. The test rated it as poor, and noted that the halogen low beams illuminate only 37.5 m down the road, compared with 109.1 m for the Ridgeline. With that performance, at a speed of 100 km/h a driver in the Colorado would have only 1.4 seconds to see and avoid an obstacle at night.

Headlights are rated for visibility in a straight line, to the left and right, and for how they perform in curves. Glare projected at other drivers is also a major consideration. Expect automakers to begin making improvements to headlight design over the next few years as the IIHS is making a grade of acceptable or better a mandatory criteria to receive a coveted Top Safety Pick+ rating.