MMA Stars and Their Cars From fight cages to roll cages

It’s only natural to associate high calibre athletes at the top of their game with hot cars. After all, successful sports stars tend to occupy that rare economic stratosphere where the entire panoply of high-performance and ultra-luxury automobiles reside, and it makes sense for their competitive natures to manifest themselves in the form of horsepower and gleaming metal when they’re not out on the field or in the arena.

Or – in the cage. Mixed martial arts has its fair share of car fanatics too, and mixed in with all of the exotics and de rigueur premium brands you’ll find a few hardcore gearheads who love to get their hands dirty when they’re not busting knuckles in the octagon.

Check out these MMA stars and their cars and see which ones you’d choose to park in your own fantasy garage. 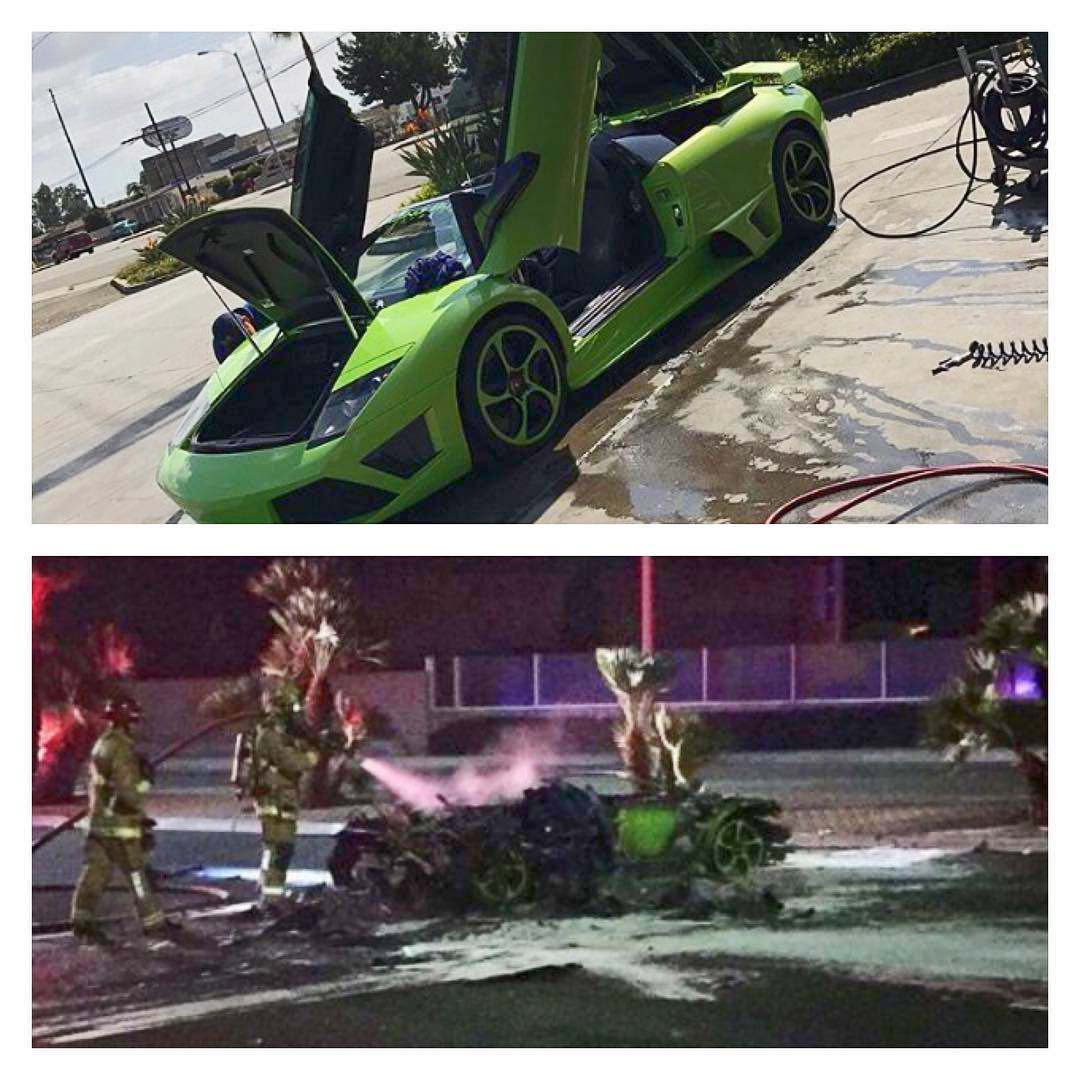 “Rampage” Jackson has enjoyed a long MMA career, spanning both the UFC and currently Bellator, and during that time he’s gotten a bit of a reputation for favouring green over any other paint job – with his latest ride, a Lamborghini Murcielago, being no exception. Unfortunately for Jackson, he learned the hard way that you should never lend your Lambo to a friend, as this past month it was involved in a horrific crash that totalled the car but miraculously left no one involved with any injuries. As Rampage eulogized on his Instagram account, ‘I’m gonna miss my green girl.’ Of course, he’s also got a Hellcat in the garage to help ease the pain, so don’t feel too bad for him. 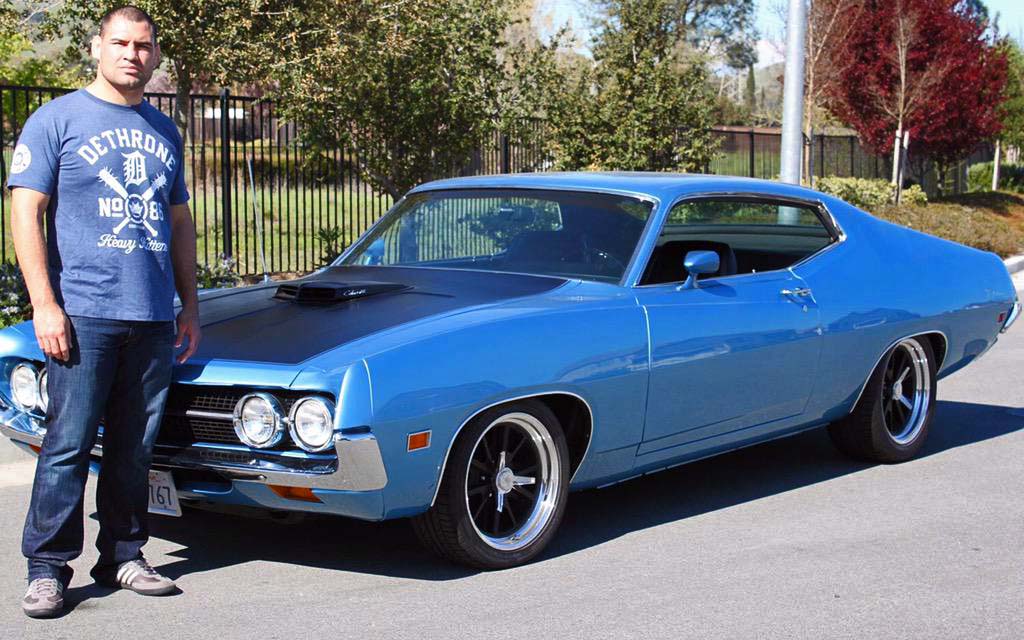 Cain Velasquez isn’t just one of the most dangerous heavyweights on the UFC roster – having worn the championship belt twice in his career – he’s also a genuine car guy. Although his daily driver is a Ford F-150 Raptor (customized, of course), Velasquez made the second car he ever purchased a little more special: a 1971 Ford Torino Cobra. Although it might look stock-ish from the outside, Cain has put serious time and money into building the muscle car’s suspension system, and it also sports a street-friendly roll cage and a 514 cubic inch big block V8. Velasquez has also driven in the Toyota Grand Prix of Long Beach Pro/Celebrity race that happens every year on the IndyCar circuit. 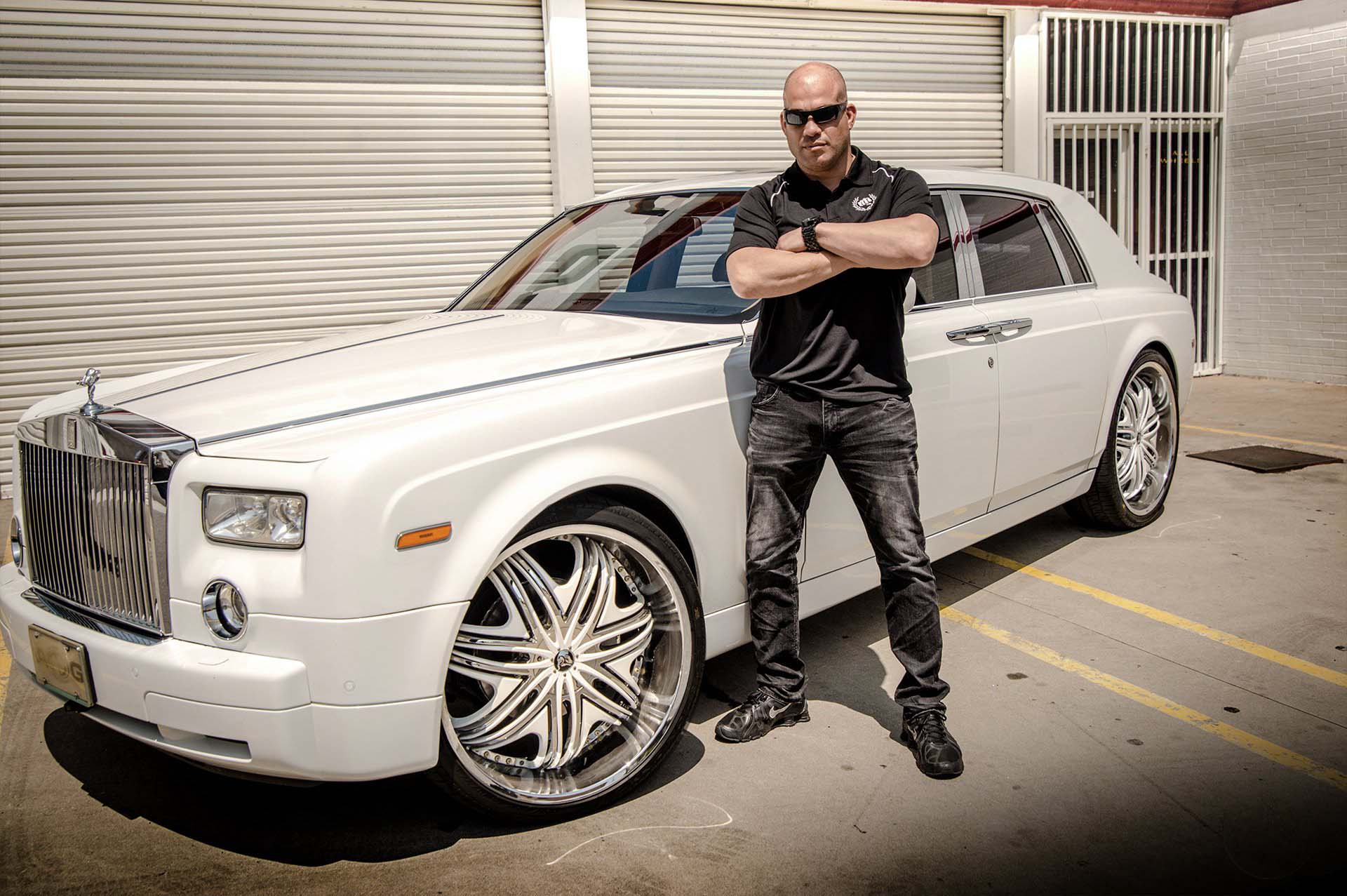 Tito Ortiz needs no introduction as a pioneering light heavyweight champion in the UFC’s early push to become a household name 15 years ago. He’s still in the ring with Bellator, and he’s still driving hot cars around Huntington Beach, California – including his Rolls-Royce Phantom, which was recently the subject of an Instagram/Twitter feud between Ortiz and his upcoming opponent Chael Sonnen. Sonnen claimed that the Phantom had been repossessed due to Ortiz’s precarious financial situation, a fact that Tito refuted by simply filming a video of it parked in his driveway next to his Cadillac Escalade (which is riding on 26-inch rims). 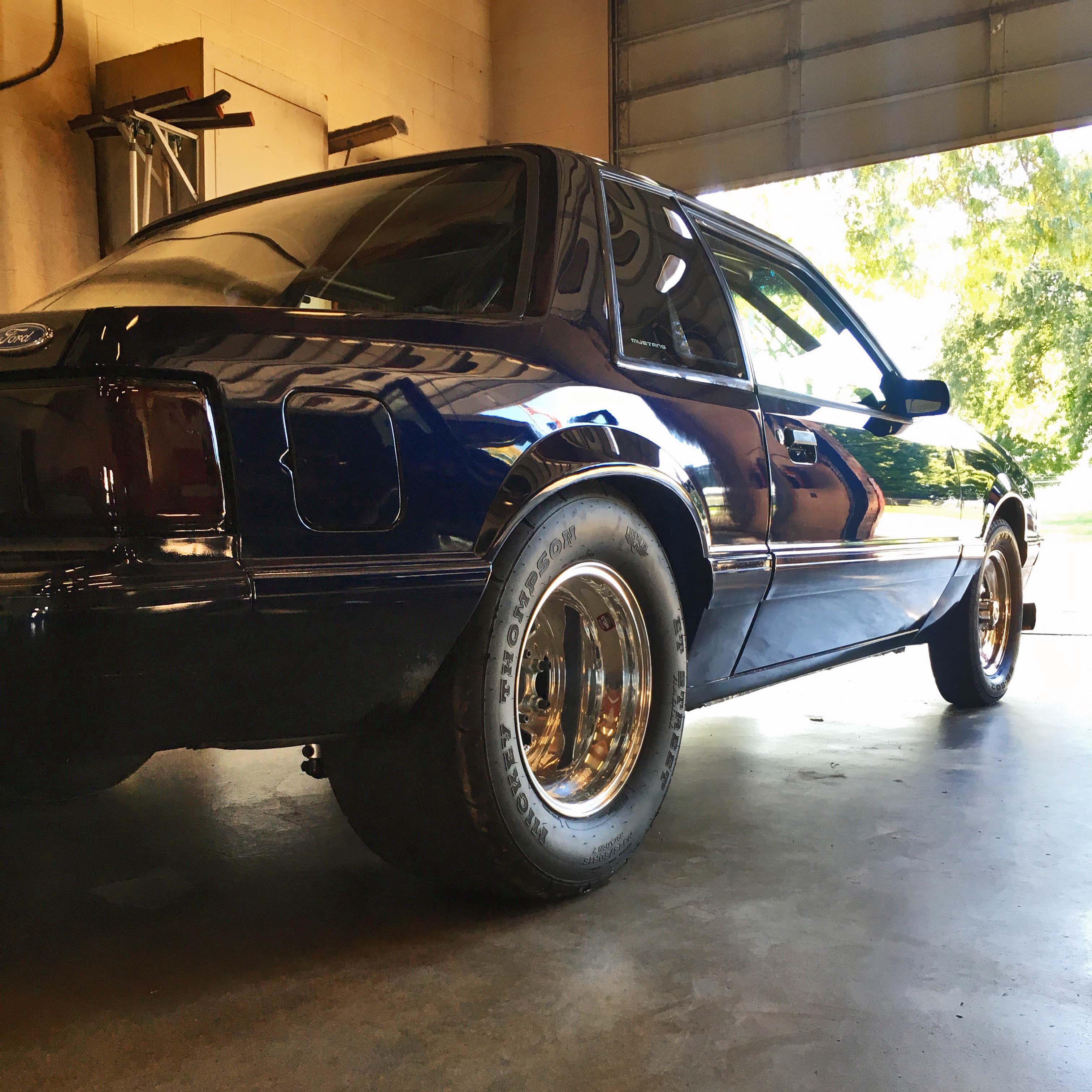 It doesn’t get much more badass on the street scene than when your car can run the quarter mile in a blistering 8.5 seconds – and that’s exactly what Eddie Wineland’s Ford Mustang notchback was built to do. Featuring a 6.0L Chevrolet V8 transplant (that’s sure to raise the hackles of purists everywhere), the Mustang is running 18 pounds of boost from an S480 turbo setup that feeds the 3.27 rear gear ratio by way of a TH400 automatic transmission. The former WEC bantamweight champion’s car was built and tuned by a buddy to run on E85 ethanol fuel, and it’s fully caged to comply with NHRA safety specifications. 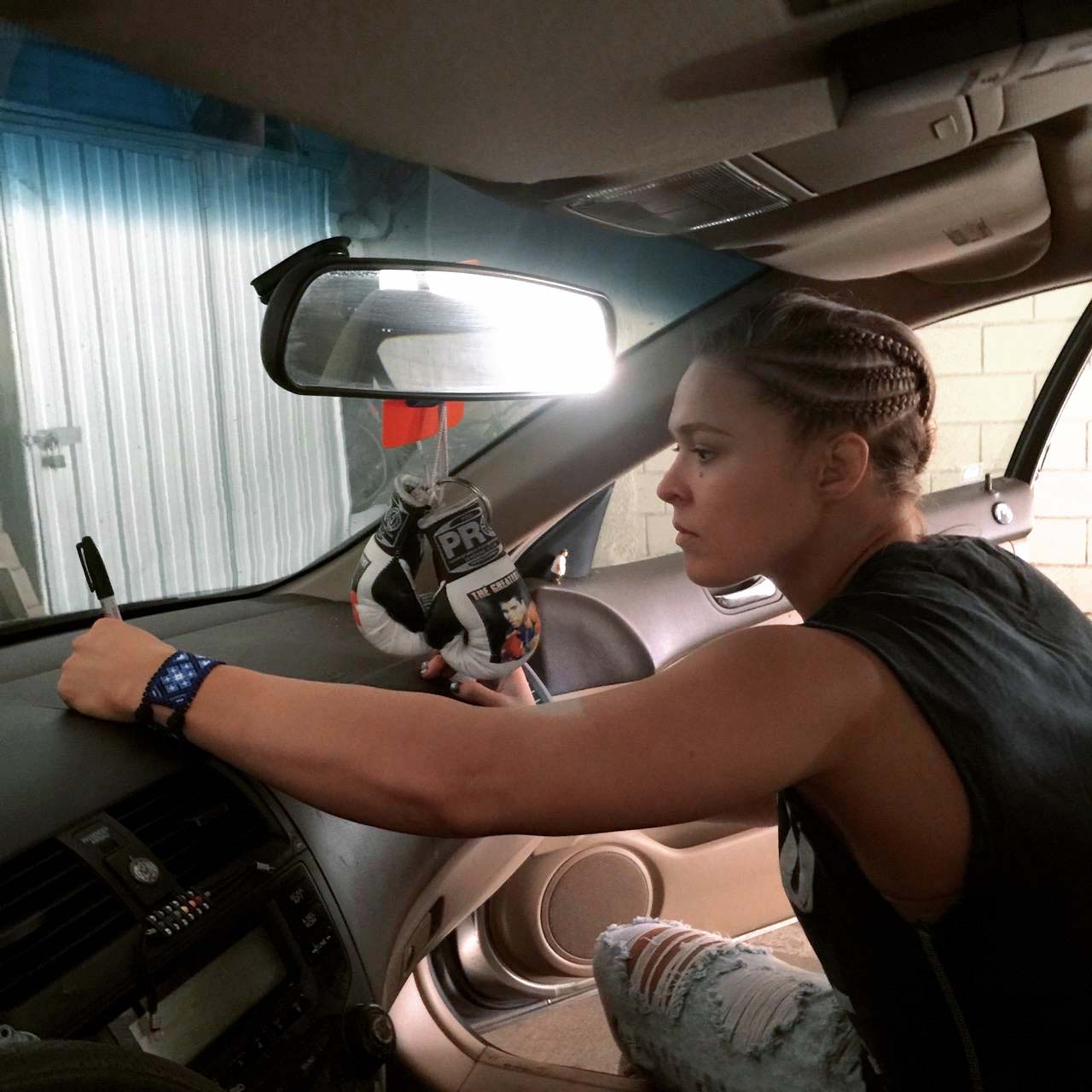 It’s not easy making your way up in the world of MMA, especially if you’re a woman trying to crack a card that’s been dominated by men in North America for two decades. Despite being an Olympic medalist, former UFC women’s bantamweight champion Ronda Rousey spent more than a few nights living inside her 2005 Honda Accord when she wasn’t able to make ends meet while training. She sold the car on eBay in 2015, along with a handwritten ode to the trusty sedan and a bunch of memorabilia to help speed the sale (it cracked the $20k mark before finding a new home). Rousey went on to play a role in the Fast and Furious franchise, and has presumably graduated to a more glamorous ride. 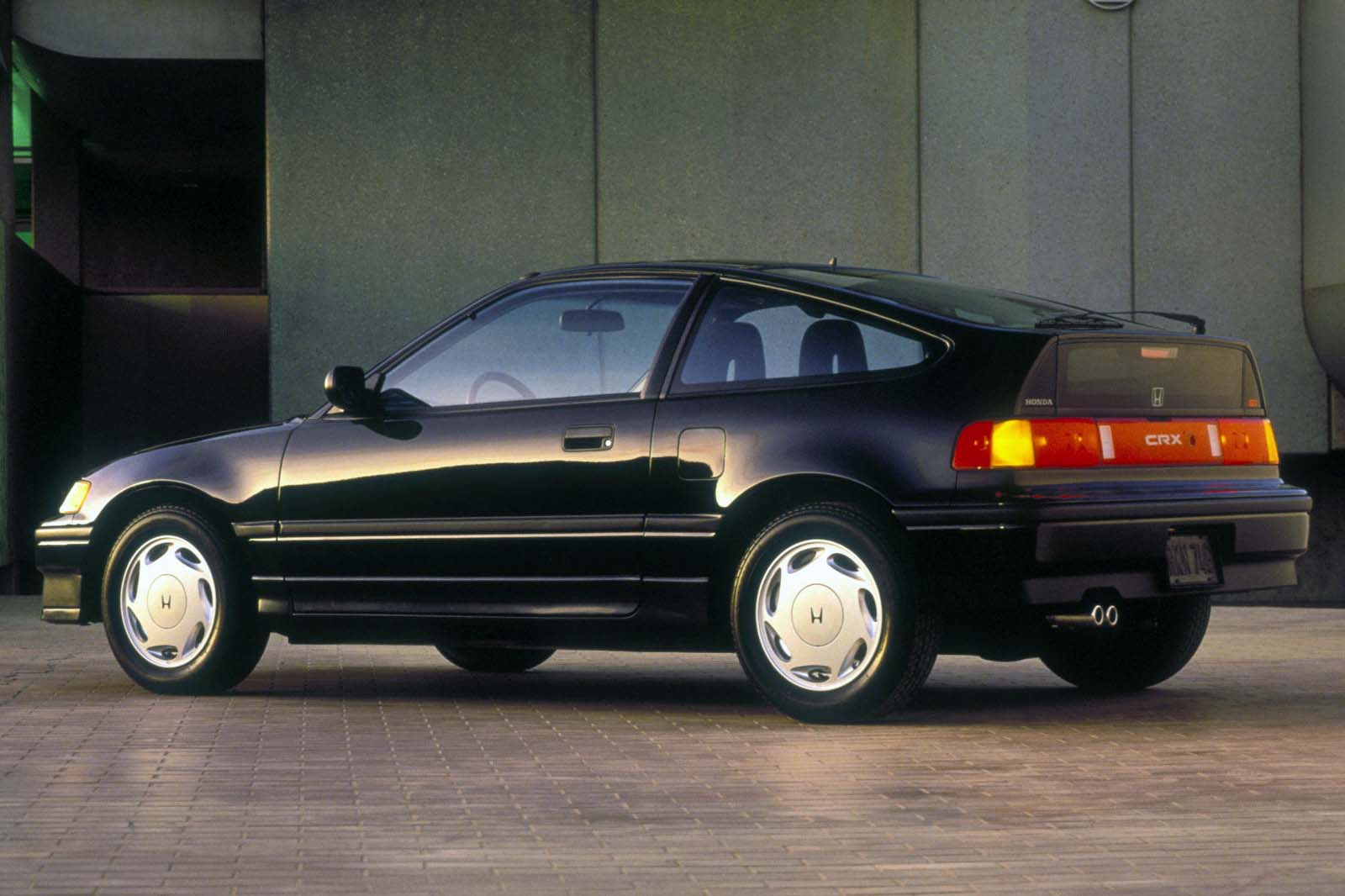 How do you know you’re a real car guy? When you can appreciate performance that doesn’t come with a prancing horse on the badge just as much as you do an Italian exotic. That’s the case with Bellator featherweight fighter A.J. McKee, whose lust for all things automotive is as inclusive as it is passionate. McKee fully plans on filling out his stable with at least one Ferrari, but right now he’s got a hell of a sleeper in his 1988 Honda CRX that features a B18 turbo engine swap. Running 10 lb of boost, the ultra-lightweight hatchback is as nimble as Mercenary is in the cage, and it has been his dream car since he was a teenager. He plans on adding to his burgeoning collection soon enough: he just missed out on buying a buddy’s 2006 Mitsubishi Lancer Evolution MR, and is thinking of snagging a Nissan GT-R next.