Alfa Romeo unveiled two vehicles at the Los Angeles Auto Show today, and while neither of them is a two-seater sports car, both are packed to the hilt with Alfa Romeo’s racing DNA.

The stunner of the day was the 2018 Alfa Romeo Stelvio, the brand’s first foray into the burgeoning luxury SUV market. It’s named after the Stelvio Pass in the Italian Alps, one of the greatest driving roads in the world, featuring stunning views and 48 hairpin turns.

Built using lightweight materials such as carbon fibre, magnesium, and aluminum on the Giulia platform at FCA’s facility in Cassino, Italy, the Stelvio will be available in three trims: Stelvio, Ti, and the performance-oriented Quadrifoglio. 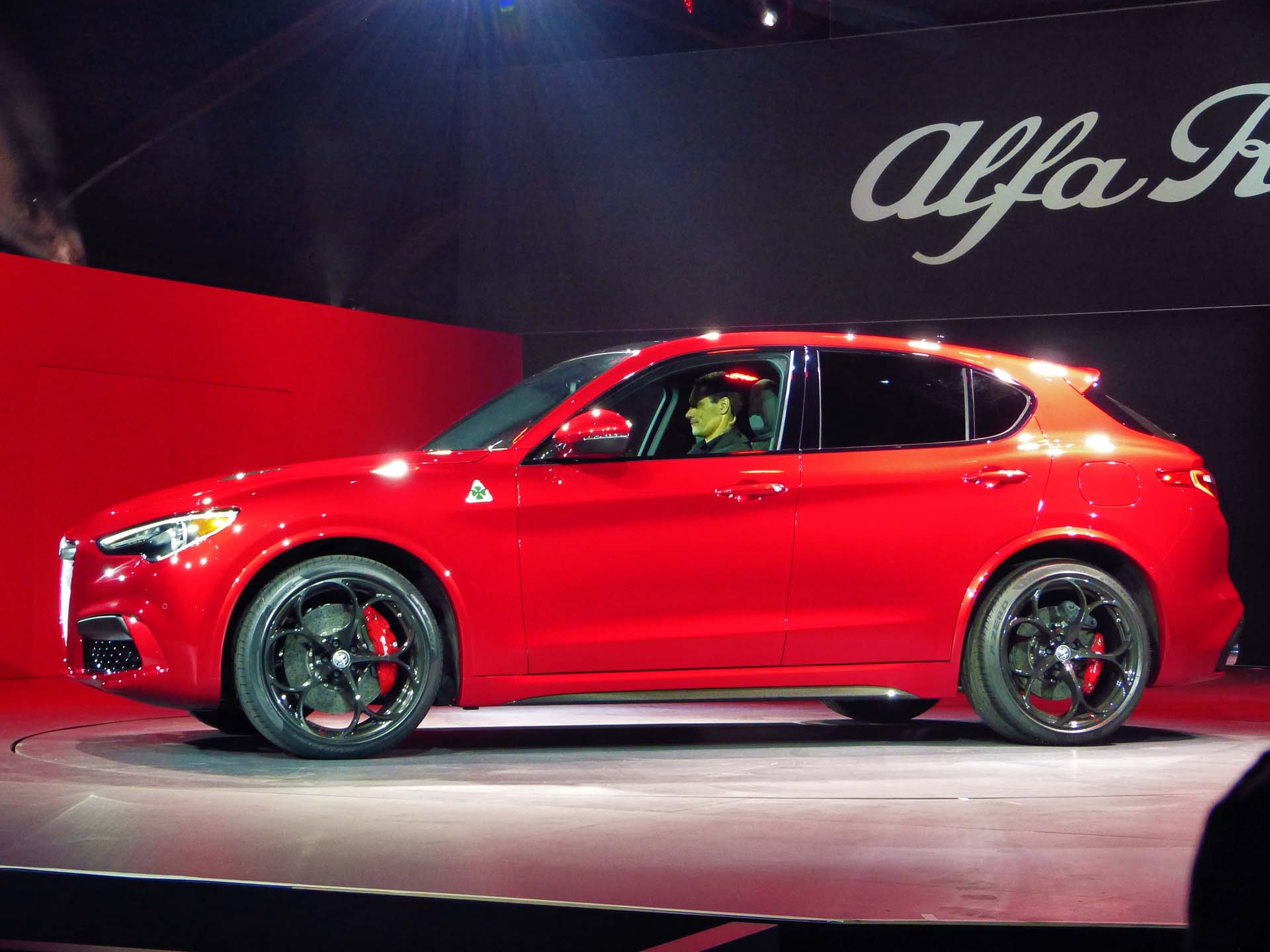 The latter two trims feature an aluminum 2.0L turbocharged four-cylinder paired with an eight-speed automatic transmission and all-wheel drive. Power specs of 280 hp and 306 lb-ft of torque give it a 0–60 mph time of 5.4 seconds.

The Quadrifoglio, on the other hand, features a 2.9L all-aluminum biturbo V6 sourced in cooperation with Ferrari that’s paired with an eight-speed automatic and all-wheel drive with torque vectoring that has a heavy rear-wheel bias. It features adaptive air suspension and available carbon ceramic brakes, and its 505 hp give it a 0–60 mph time of 3.9 seconds – making it the only vehicle in its class under 4 seconds – and a top speed of 284 km/h.

This horsepower figure is 65 higher than the Porsche Macan, and while it hasn’t yet been tested at the Nürburgring, FCA says its simulations suggest this will be the fastest SUV ever on the Nordschleife.

Design highlights include a near 50:50 weight balance, a Formula 1 inspired flat-bottomed steering wheel and an 8.8-inch infotainment system equipped with Apple CarPlay and Android Auto. 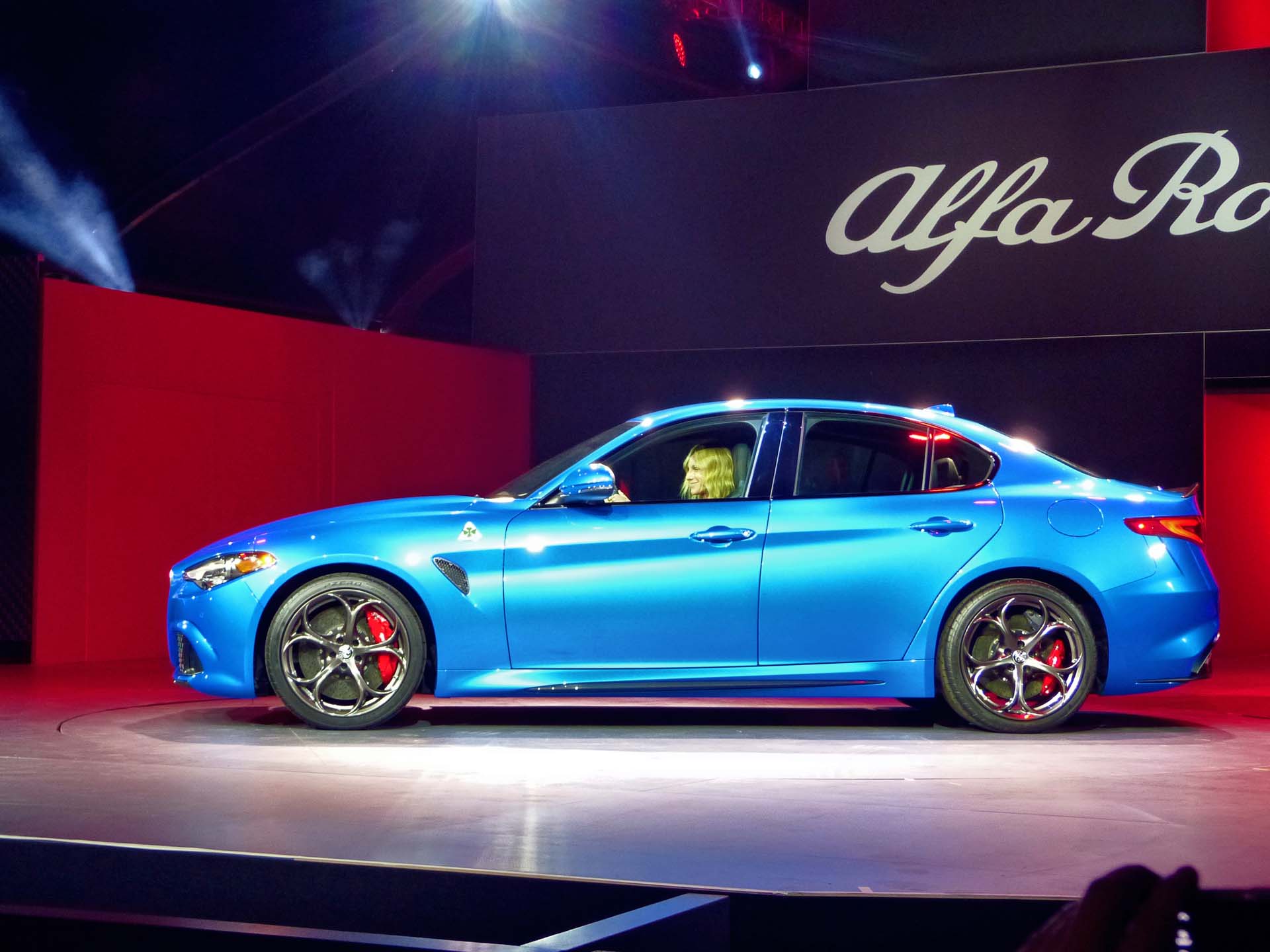 The 2017 Alfa Romeo Giulia sedan was also rolled on stage. It’s set to be available at same three trim levels: Giulia and Ti, both rated at 280 horsepower and a 0–60 mph time of 5.1 seconds, and Quadrifoglio.

This latter version is said to be the fastest production four-door car in the world, having set a time of 7 minutes and 32 seconds at the Nürburgring – and at the hands not of a professional racer but of an FCA employee. With a power output of 505 hp, top speed of 307 km/h, and a 0–60 mph time of 3.8 seconds, FCA says the Giulia Quadrifoglio outperforms not only the Porsche Panamera Turbo but also the Porsche 911 GT3.

No Canadian pricing, trim details or release timing is available at this stage for either of these products.