As they say, the results will surprise you
Advertisement

As they say, the results will surprise you

WOODBINE RACEWAY, Toronto – Invariably, when discussing winter tire use, there’s always someone who’ll insist that their new all-seasons are good enough to see them through the cold months.

Usually these folks are well-meaning, but misguided. They’ve either been told by their car’s service centre or tire dealer that the chunky tread on their all-season tires are all they need to get them through the snow and ice.

Not so. There’s a lot more to proper winter tires than just the tread. While the design of a tire goes a long way in its ability to climb out of messy stuff, be it sand, mud, or yes, snow, winter tires are made from an entirely different rubber compound than those meant for warmer months. Below seven degrees Celsius, your basic all-season tire freezes, which severely limits its ability to grip in the cold weather. Many auto industry professionals refer to all-seasons as “no-season” tires, since their compromised performance renders them not particularly good in any condition. An all-season tire is adequate in good weather, but the best solution is two sets of tires: one for spring through fall, and one set of dedicated winter tires.

Still don’t believe us? Understandable. Most of us want proof, or hands-on experience before adopting practices – especially potentially expensive ones – as inviolate rules.

Recently, Kal Tire, an independent Canadian tire retailer, invited us to participate in a series of exercises that would illustrate, hopefully, the dramatic differences in their performance. 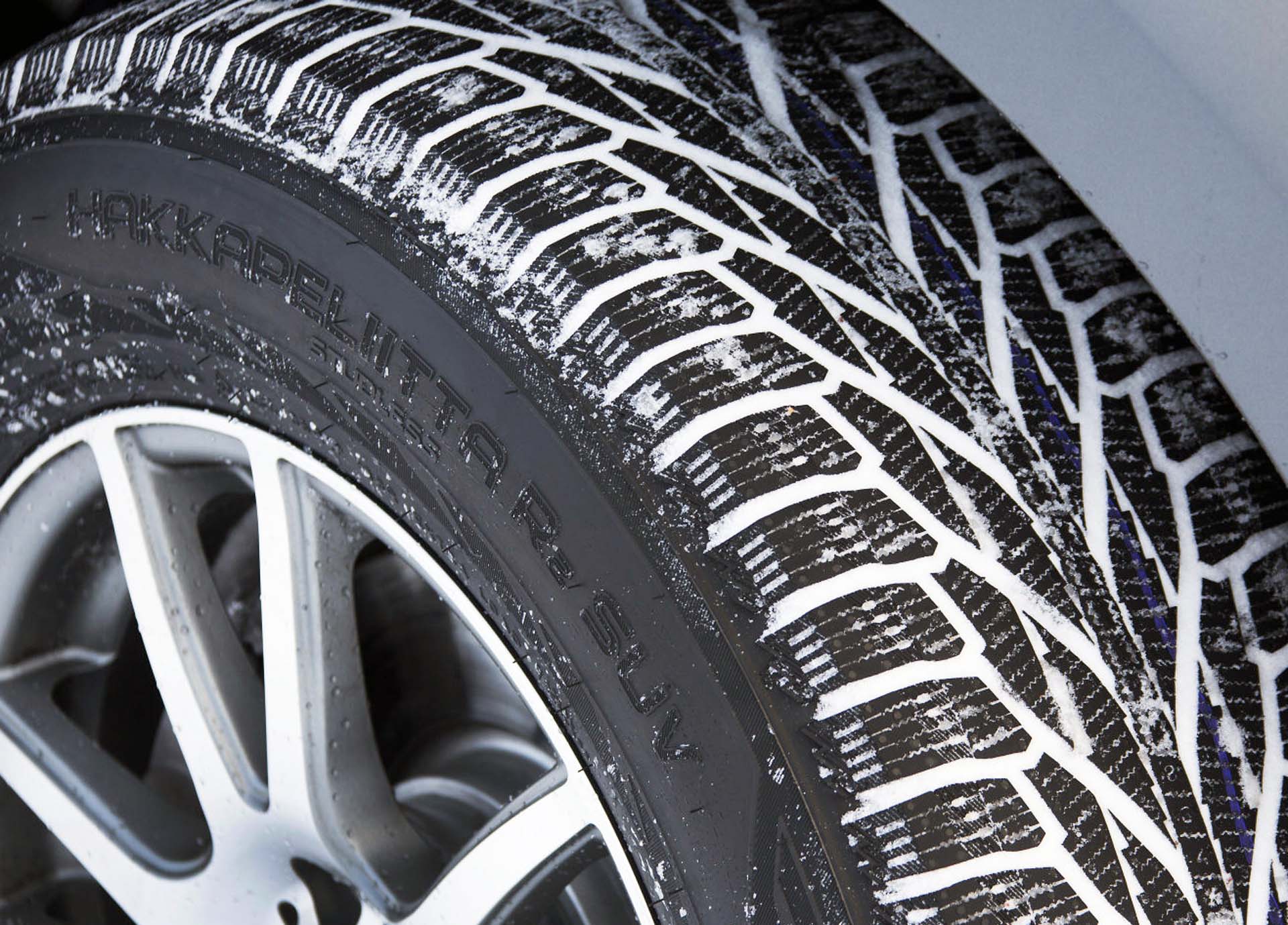 This sort of organized tire testing event is useful, although we approach them with the caveat that there are always unknown factors beyond our control. We’re forced to take the organizers at their word that the vehicles and tire pressures are all identical, and that the tires are exactly as claimed. After all, they’re in the business of selling tires, right?

We’ve attended many such comparison events. But this one had a twist.

Instead of merely pitting new winter tires against new all-seasons with the predictable outcome, they set up a comparison between four sets of rubber: new Nokian Hakkapelitta R2 winter tires versus new Nokian Entyre 2.0 three-season tires – and then the same two tires with 75 percent wear.

Kal Tire had already performed this test on an iced-over lake in British Columbia, using professional rally drivers. In order to replicate those conditions in a Mississauga parking lot on a drizzly November day, they had to haul in truckloads of melting snow.

The first exercise consisted of straight-line braking on a few hundred metres of snow, starting out on the new Hakkapelitta winter tires.

Approaching at a steady 30 km/h an hour, we hit the brakes at the marker and slid to a stop in roughly 27 metres.

Next, we climbed into the car wearing brand-new three-season Entyres. At 30 km/h, we slammed on the brakes at the same marker and slid to the 31-metre cone. Four metres may not sound like much, but it could be the difference between stopping safely, and hitting something – or someone. 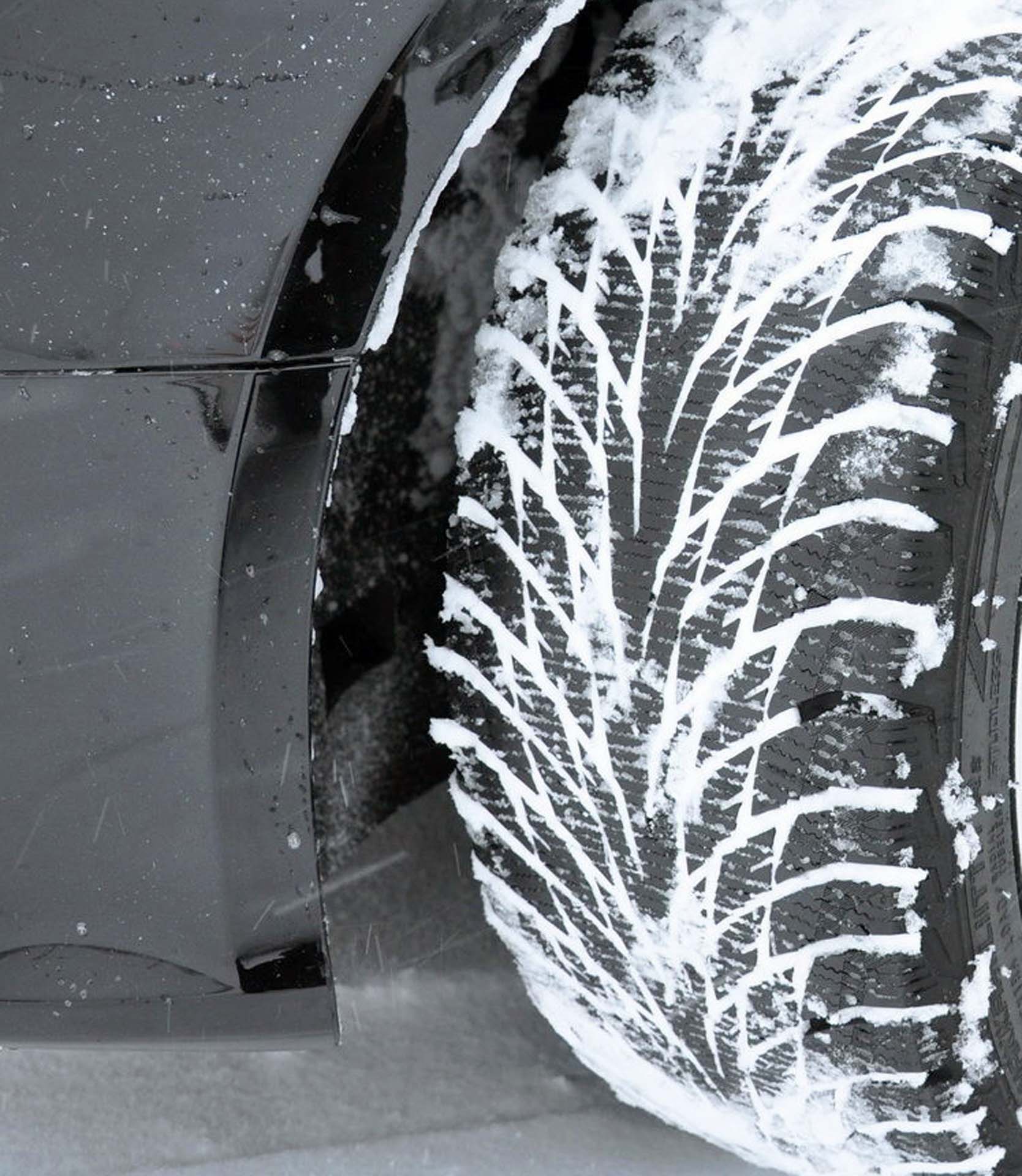 The next comparison was even more eye-opening. The car was shod with the same Nokian Hakkapelittas, but they’d been shaved to replicate 75 percent wear. The outcome of this one seemed inevitable; like most people, I’d believed that only the outer compound of the winter tire provided grip and that once it was worn down the tire lost its effectiveness. That may have been true at one time, but modern winter tire compounds go far beneath the tread blocks. The used winter tire out-braked the brand-new three-season by nearly two metres.

Lastly, we performed the same braking exercise on worn three-season tires. As you may have figured, these proved to be the worst by far, sliding to a stop more than 34 metres past the braking marker.

Using the same four cars, we headed to the skid pad – an exercise that consists of driving in a circle, again at 30 km/h until the tires are pushed to the limit of their grip. This test is especially useful to determine how well a tire will corner on wet or dry pavement. In this case, half of the skid pad had been buried in about a foot of snow.

On the brand-new Hakkapelittas, there was only a moment’s hesitation before the tires regained their grip and we continued our circle, in complete control. Surprisingly, the worn winter tires performed similarly, albeit the slide was a fraction longer.

If you think the worn three-season tire produced the worst performance, you’re right, to a point. Indeed, it had the worst instance of understeer, losing grip and ploughing in a straight line off the circle.

But while the new three-season managed to recover more quickly from the slide, once the rubber found grip on the dry pavement it induced a moment of oversteer which could potentially cause a spin.

These tests were performed in a controlled environment, at speeds no greater than 30 km/h. The results in the real world would be far more dramatic and devastating. Interesting that a company with a vested interest in pushing tire sales would want consumers to know how much better their older winter tires are than a brand-new set of popular three-seasons.

“To me that was an ‘ah-ha’ moment,” said Kal Tire Senior Zone Manager, Ron Pierce. “I always knew [winter tires] were better, but didn’t realize they were that much better.”

Of course, there’s the age-old argument of the cost and inconvenience of owning two sets of tires.

“Since you’ve got two sets of tires, you’re going to get twice as much wear,” said Pierce.

For urban dwellers with no extra space, there are numerous places that will store your tires for you – some will even store them for free if you buy from them.

It’s not a question of whether you can afford it, but rather, can you afford not to?