Lincoln, Canada, and the Navigator While it has been a while since Lincoln was a dominant player in the market, that’s about to change, according to the company’s Canadian president. On the heels of the all-new Continental, the flagship sport-utility Navigator is expected to arrive as a production vehicle later this year.

The Navigator concept, revealed in 2016, made its national debut at the Canadian International Auto Show in Toronto recently. While features like its gull-wing doors and three-step running boards won’t make the final cut, expect much of its general shape and styling to transfer to the production version.

“We haven’t done an all-new Navigator in many years, and it’s a small market but we need to be in that space,” says Mark Buzzell, president and CEO of Ford of Canada. “It’s a lower-volume vehicle, but it’s a well-loved Lincoln nameplate.” 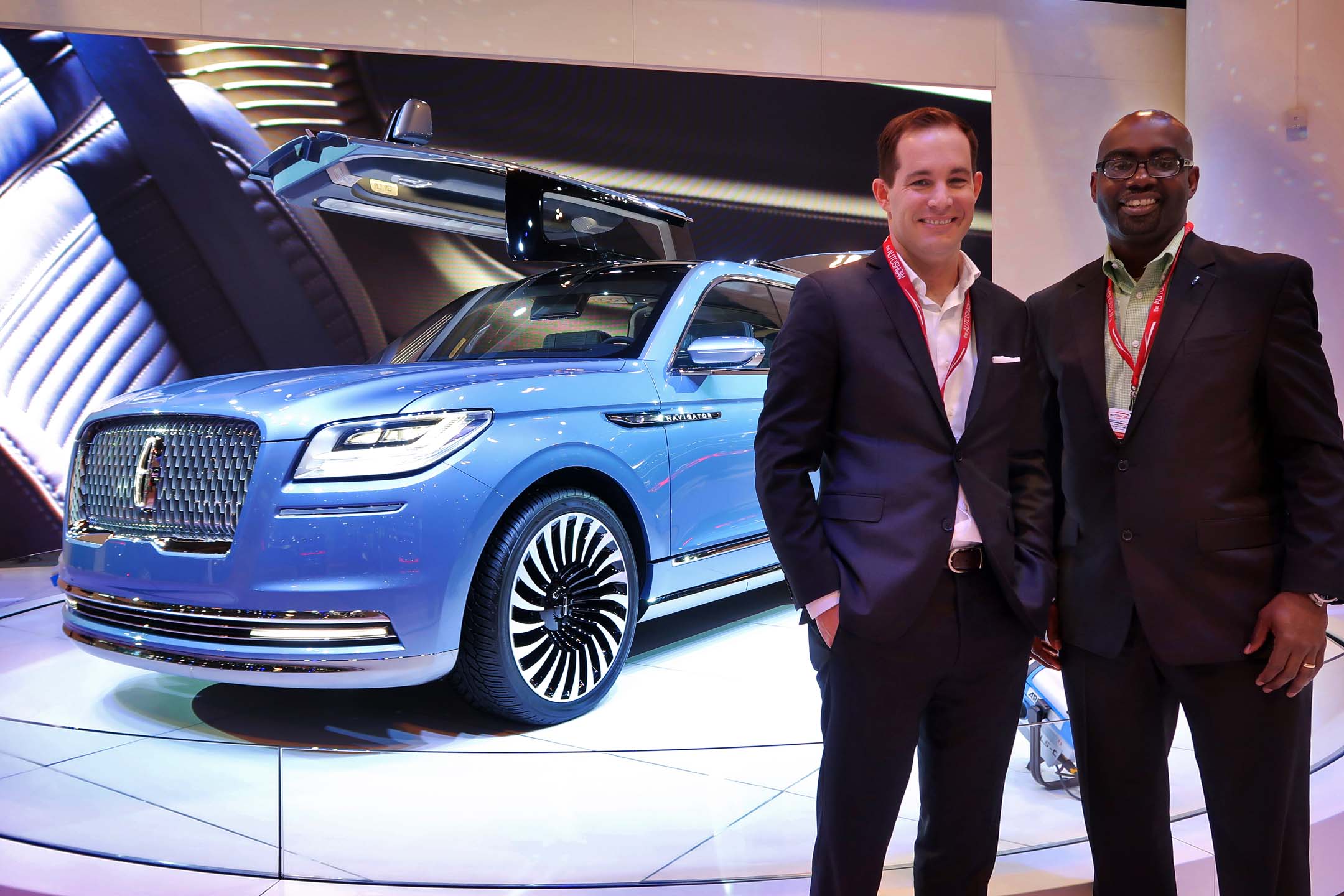 The company is tight-lipped on exactly what we’ll see when Navigator heads to the production line at Ford’s facility in Michigan, but expect a turbocharged 3.5-litre EcoBoost engine, the model’s highest-ever towing capacity, standard Revel audio system, and numerous safety technologies such as pedestrian avoidance, 360-degree camera, and adaptive cruise control with start-and-stop technology.

The concept’s front seats are adjustable 30 ways, and while that many variations might not make it to the final version, it’s likely that something close to the production Continental’s 24-way chairs should keep driver and passenger comfortable.

Buzzell wouldn’t confirm the choice of construction materials, but given that the Ford F-150 and upcoming Expedition feature aluminum bodies, it’s a safe bet that the Navigator will have one as well.

The brand has taken on a global presence, which Buzzell says is part of the revival. “If you go back seven or eight years, when the industry was in difficulty, we decided to fix the ‘blue oval’ first, and so we made a lot of investments in Ford,” he says. “We see ourselves growing with Lincoln by growing the brand globally. We went into China two years ago and have opened 65 dealerships there.”

One of the major issues it faces here at home is finding a younger audience for a nameplate that traditionally resonates primarily with older buyers. “We’re going to do a host of different things, some of which we have tried before, like communicating with customers the way they want communication, and improving our online presence,” Buzzell says. A pick-up and delivery provision for service is available in the U.S. and the company is looking at the possibility of it in Canada. There’s already a mobile app which lets owners remotely unlock or start the vehicle, locate it, and find a parking spot. Expect to see more features added to that, along with the possibility of affinity partners such as restaurants or stores. 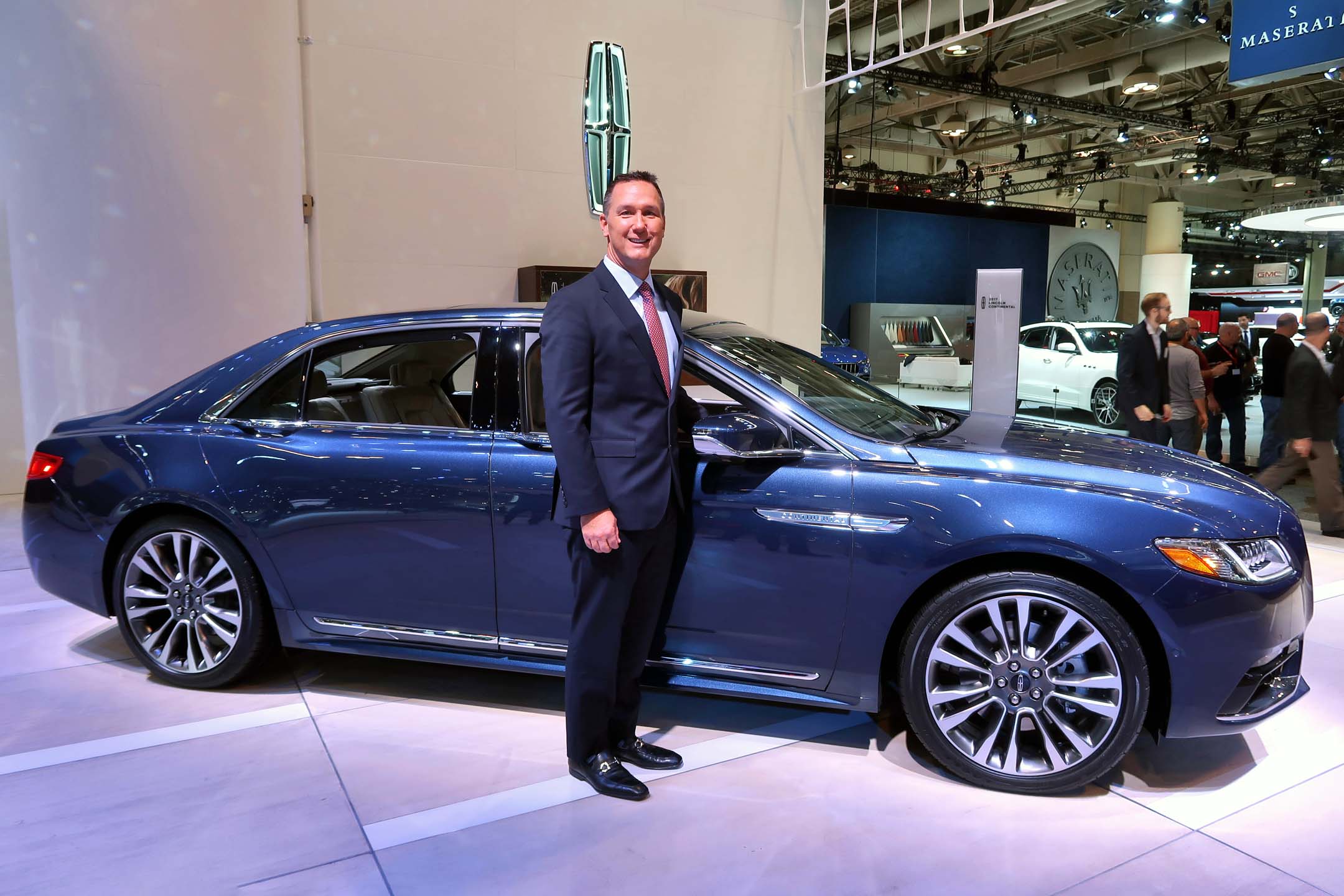 Mark Buzzell, president and CEO of Ford of Canada, with the Lincoln Continental
Photo: Jil McIntosh

The Continental and Navigator, the two most recent models, are also an attempt to move the company away from designs that were very obviously based on Fords. Ryan Niemiec, interior design manager for Lincoln, says the Navigator concept is a “strong indicator” of the production version. “The Continental was the transitional (design), while the Navigator has a horizontal feel,” he says. “We had the opportunity in the last few vehicles to differentiate the platforms and give it a whole different feeling.”

The Navigator was the first full-size luxury SUV in the market when it debuted in 1997, and Earl Lucas, Lincoln’s chief exterior designer, says it already attracts the brand’s youngest customers. “We don’t draw inspiration from our competitors,” he says. “There’s inspiration from our customers, we’re conscious about the marketplace, and we’re creating a different feeling about our brand. It connects to a younger crowd, but we’re not about being ostentatious. We’re trying to seduce you.”

The gull-wing doors weren’t meant so much to draw attention — although they do —but to open the vehicle up so people could see the interior, Lucas says. The concept model also includes a wardrobe at the rear, outfitted with high-end shoes, sunglasses, watch, pen, and jacket, which Niemiec says was a monumental task in itself “just figuring out what we should have back there,” and which is aimed squarely at affluent younger buyers.

Lincoln has produced four new models in the last four years, and has seen three consecutive years of sales growth in Canada, Buzzell says. “We’re growing the brand, and we must create awareness and break through the perceptions,” he says. Part of that is in moving away from traditional advertising to focus on younger customers, and to that end, Lincoln recently held an event in Toronto aimed primarily at social media influencers. “It’s going to take things like that to expose the brand to people who understand the industry and create the awareness,” he says. “You can’t just do that with TV ads with Matthew McConaughey. Our event wasn’t just about the vehicles, it was the experience. We call it quiet luxury, people who want great experiences that aren’t flashy. It’s what makes them feel good.”