To help celebrate the 50th anniversary of Hot Wheels, two full-sized versions of the most famous Hot Wheels cars are on display at a Hot Wheels and autoTRADER.ca display booth on the floor of the Vancouver International Auto Show this week.

First displayed at Comic Con 2014, the full-size Darth Vader car is probably the most well-known real-life version of the 1/64th scale Darth Vader die-cast model. Designed by Bryan Benedict and custom built by Billy Hammon, the Darth Vader car is a fully-driveable, two-seater car based on a Corvette C6 chassis with a 430-hp 6.2-litre V8 and six-speed manual transmission.
The custom-built fibreglass body was inspired by Darth Vader’s mask and the wheels are custom built specifically for the Darth Vader car. The cabin has no doors but it does have a power-operated helmet roof that rises up, and a windshield that swings forwards to allow access to the cabin. Resembling Darth Vader’s mask, the nose has three screwtips that function as working headlights and turn signals. There is no rear window, just side mirrors.

The side pipes are meant to resemble Darth Vader’s light sabre, but they aren’t really exhaust pipes - the real exhaust pipes exit at the rear.

The coolest thing about the Darth Vader car is that there is only one in the world - and this is your chance to see it.

The second 'model' is a full-size Bone Shaker hot rod, inspired by Hot Wheels popular Bone Shaker 1/64th scale diecast model. Penned by longtime Hot Wheels designer Larry Woods, the Bone Shaker is one of the most coveted Hot Wheels cars of all time. This road-going version was built by Picture Car Warehouse in 2011.

Skulls and bones abound in the Bone Shaker: the big metal skull in at the nose hides a working radiator; bony metal hands grip the front headlights; the long shift lever resembles a human spine with a small skull for a shift knob: and there’s a cool skull and crossbones-designed steering wheel.

Lurking under the hood is a 402-hp 350 cubic inch V8 with with eight inlet pipes poking through the hood and chrome exhaust pipes exiting directly from the engine behind the front wheels. Flat black paint with flames complete its hot rod/rat rod appearance.

Like the Darth Vader car, the full-size Bone Shaker is a road-going hot rod that’s fully drivable – where the law allows it! 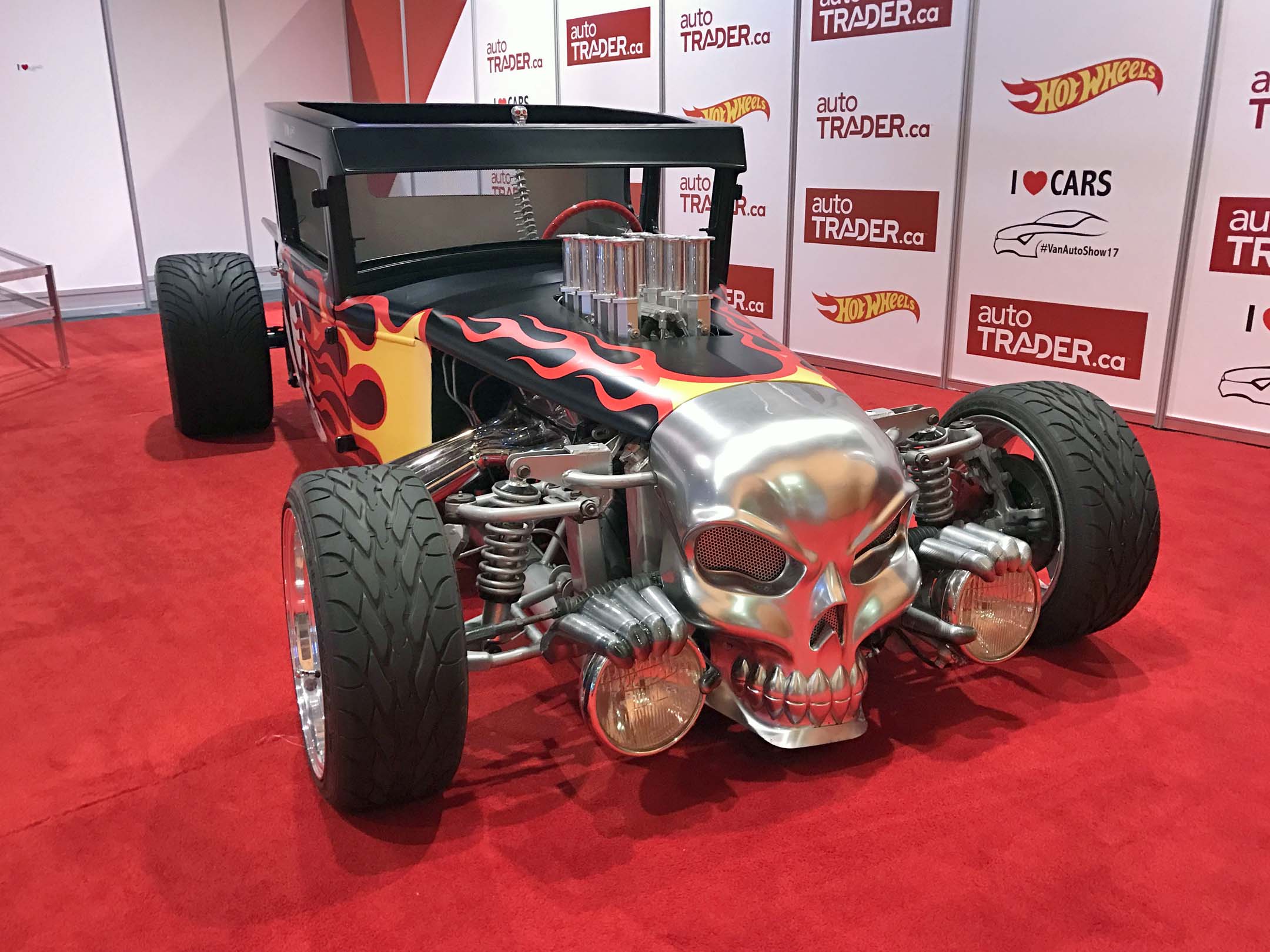 See more
An automotive writer for over 30 years and co-founder of one of Canada’s first automotive websites, Greg Wilson has moved into the editorial slow lane and now contributes occasional vehicle reviews and features to autoTRADER.ca’s editorial section. Greg is a member of the Automobile Journalist’s Association of Canada.