A Tale of Two Tires: Budget vs Brand Name One of these tires costs $60, while the other retails for $135. They're both all-season tires for passenger cars in the same size, with the same speed rating. So what makes one cost more than double the other? Is it really worth the extra cost? Can a cheap tire perform as well as an expensive one, or are their claims just a bunch of stale air?

In the first five years of owning my car, a 2009 Honda Civic Hybrid, I averaged nearly 60,000 km per year. That high mileage means that I have gone through more than a few sets of tires. I'm now on my fourth set of all-season tires and third set of winters, plus I have two sets of high-performance tires in the garage for the same car – I know what a host of different tires feels like on this car, and I have a lot of seat time on all of them.

Today, the two tires I'm talking about are the Continental TrueContact and the Blacklion Cilerro. Since you've likely heard of Continental but probably not Blacklion, you can guess which one retails for $60 and which will set you back $135. I've completely worn out a set of the Continental tires, and I'm a month and a few thousand km into the Blacklions.

So, what does that extra money get you, and how differently do they perform? Let’s take a look. 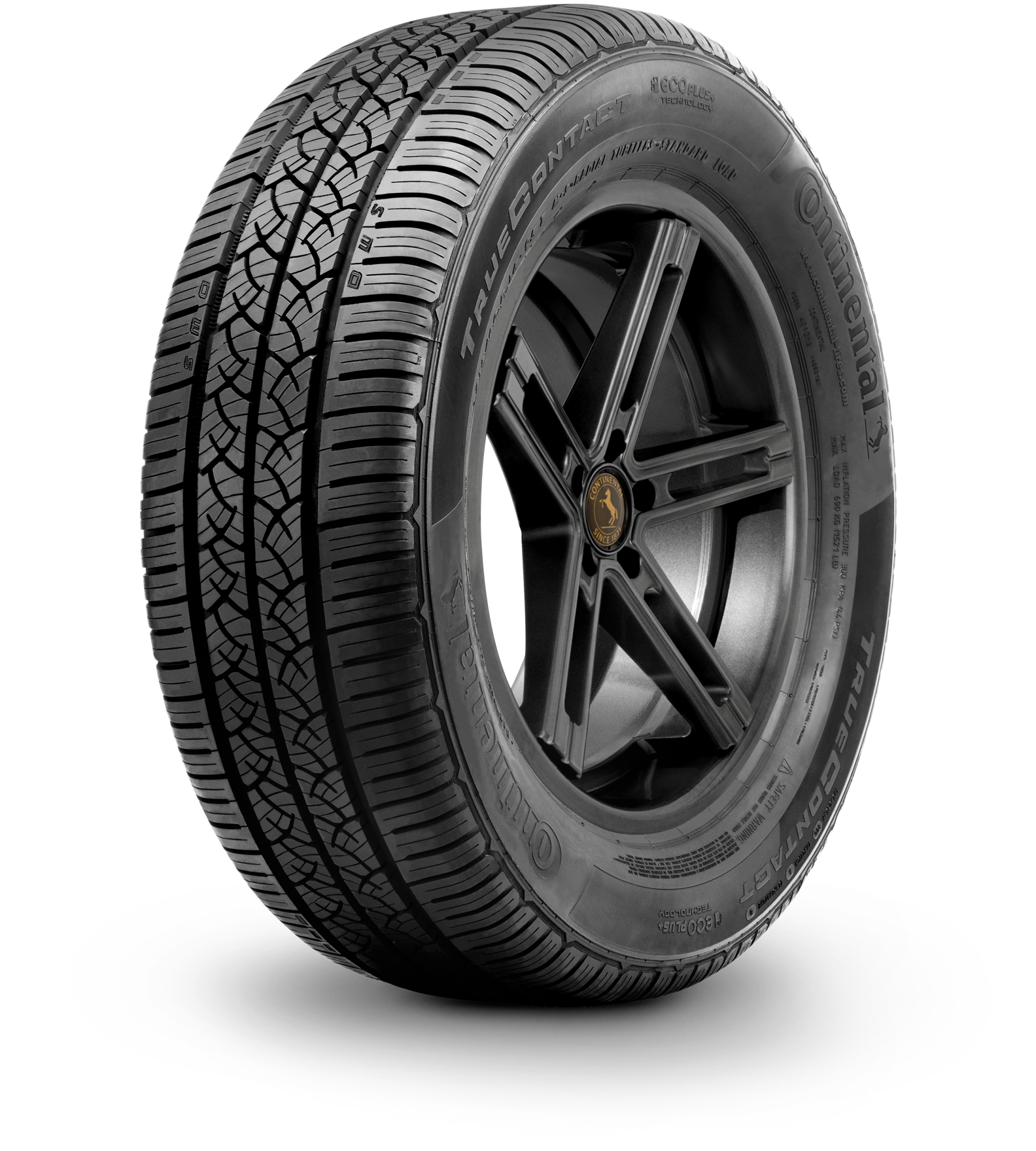 First a little bit about the tires. Both were tested in the 195/65R15 size. The TrueContact is an all-season touring tire. That means it's designed for spring, summer, and fall; for use on everyday passenger cars. Continental says that it has a "premium focus on fuel efficiency, extended treadwear and [...] wet braking." It has a treadwear rating of 800, which means it should last nearly forever, backed by a 145,000 km warranty.

The Blacklion Cilerro is also an all-season touring tire. Blacklion doesn't make any economy or mileage claims in their marketing claims, but they do say it "provides superior road-feel and handling." Unlike many of the cheaper brands, which have no real distributor for warranty claims or recalls, Blacklion is sold and distributed in Canada by a nationwide chain. 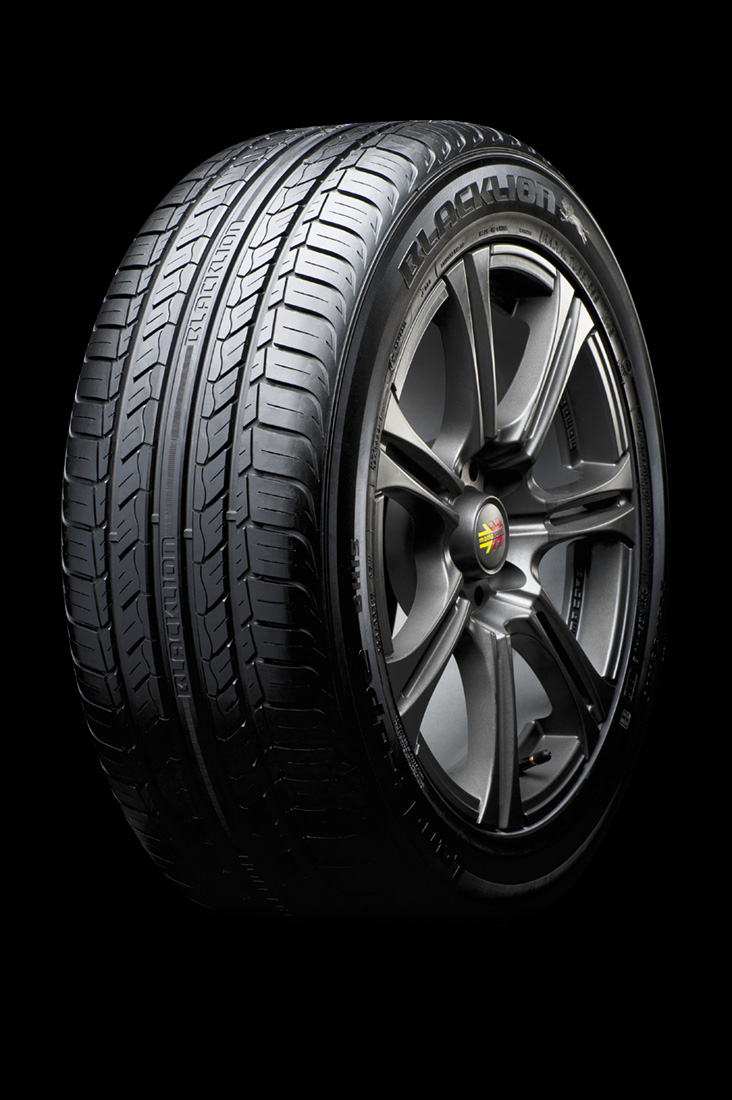 The TrueContact has neat features to help you keep an eye on your tires. There are letters stamped into the tread: D, W, and S. Those stand for dry, wet, and snow. Each letter is stamped to a different depth and disappears when the tread is too worn for those conditions. The first to go is the S, almost immediately into the tire's life, then W, which disappeared at around 4mm of tread remaining. The "D" mark remained until the tires were at 2mm and needed to be replaced.

It also has an "alignment verification system" which consists of sets of markings on each side of the tire tread. If one side’s markings disappear first, then you know there is an alignment issue that will wear out the tires prematurely. 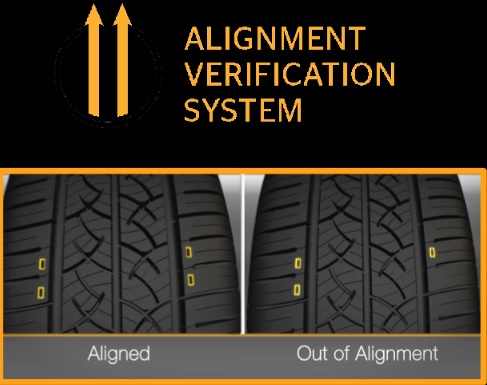 The Cilerro doesn’t have any fancy features. It has the Blacklion brand moulded into the tread surface and that’s about it.

The TrueContact sells itself as being a low-rolling-resistance tire. That's tire-speak for "great fuel economy" and one of the main reasons I bought them. Their marketing called out, "Save up to $550 in fuel over the life of the tire when compared to a leading competitor’s standard tire." That competitor's tire was the Pirelli P4. Conveniently enough, that was the tire it replaced on my car.

So how did it do for mileage? When new, the Continental tires returned about 6.1 L/100 km on my car. That's pretty good, but it was actually slightly worse than the 5.9 I was averaging on the old tires. But new tires often return worse economy than older ones, so it was to be expected. New tires have more tread depth, which adds weight and friction that both contribute to hurting you at the pump. By the time the tires were due for replacement, fuel economy had improved to 5.8 L/100 km. Not as good as the claim, but still acceptable.

How did the Blacklions do at the pumps? Well, as of this writing, they have about 2,000 km on them. I'm averaging 6.9 L/100 km. That's a massive difference. In fact, over the 80,000 km that the Blacklion tires are warrantied for, that could cost close to $640 in extra fuel costs. That's more than double the difference in the cost of the tires.

My car is a very low-powered car, and it's a hybrid. The combination makes it more sensitive to rolling resistance than the average car, so not every car will see such a big fuel-efficiency hit from a cheaper tire. But every car will notice a difference.

Higher rolling resistance and lower fuel economy is one of the most common side effects of a cheap tire. Canada doesn’t require it, but the EU requires tires to have a fuel economy rating. The Blacklion Cilerro rates an E, on an A-G letter scale. The TrueContact isn’t sold in the EU, but similar tires from the brand score a B. The grade difference suggests an fuel economy difference of around 0.4 L/100 km between the two in an average car, less than the 1.0 I experienced. 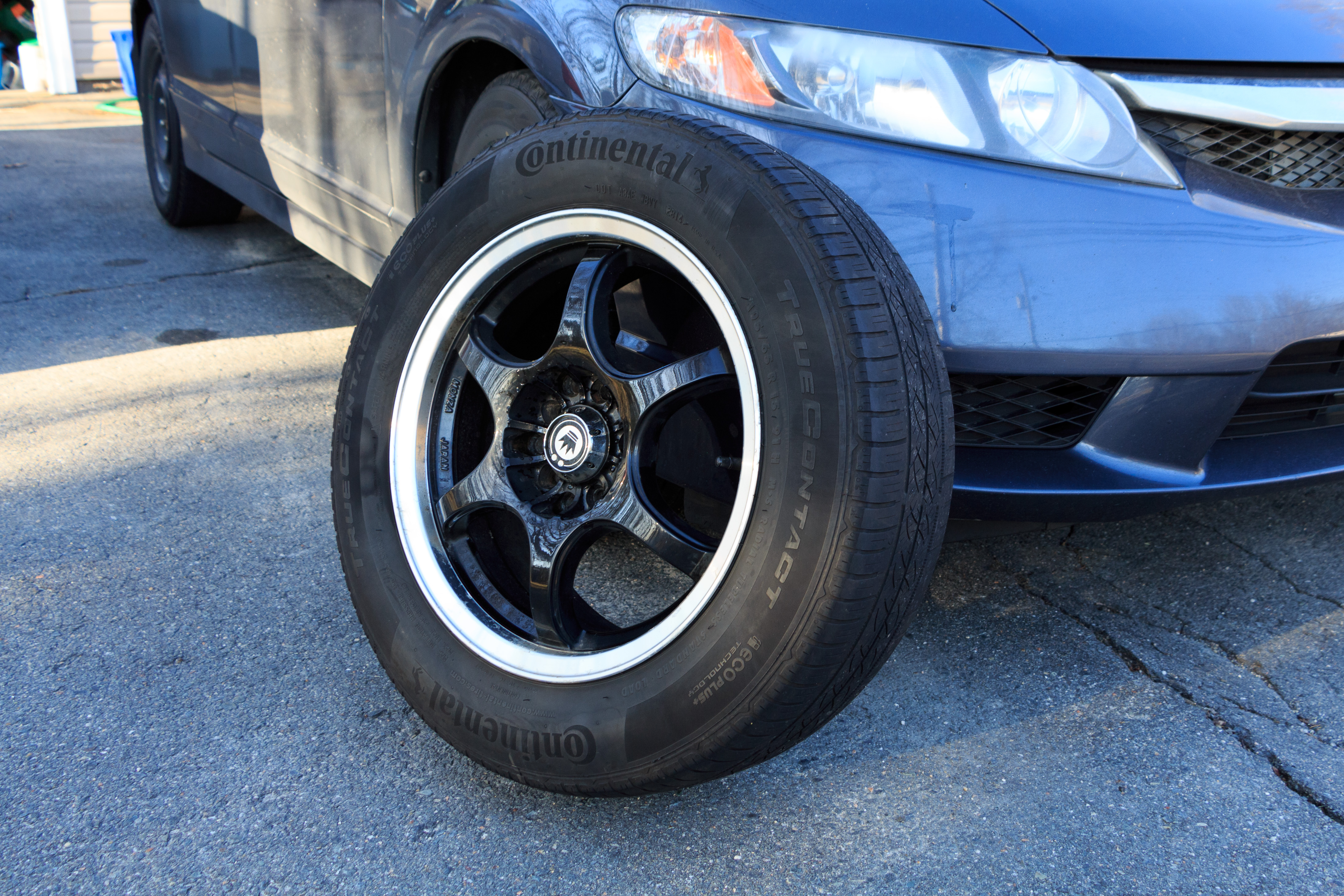 The higher rolling resistance of the Blacklion tire is apparent at almost every point in my drive. Because it's harder to push the tire, the car feels sluggish. Acceleration is slightly slower, hills feel steeper, and I have to rev the engine higher to maintain speed. If your car has an abundance of power, you might not notice the difference, but if your car is already a little slow, then the difference can make the car much less enjoyable to drive.

So the cheaper tire makes my car feel slower and makes it use more gas, but how is the traction? Well, at full tread depth it seems quite good at temperatures around 6 degrees, and in heavy rain. Traction in normal use seems on par with the Continental tires. Even under heavy braking, the traction is good. Tires with poor dry traction will start to lock up quickly under braking and skid, engaging the ABS system. The Blacklion seems as resistant to lockup and as capable under braking as the Continental.

Under hard cornering, the Cilerro transitions into understeer at a lower cornering force than the TrueContacts would, but it still can corner acceptably well for a touring tire. If you’re planning on setting lap records around an on-ramp, neither of these are ideal choices, but both are more than adequate for normal driving. My size comes in an H speed rating, which means stiff sidewalls; and both tires feel planted and firm during emergency manoeuvres like a sudden lane change. Despite a tall 65 series sidewall, both tires have a quick and responsive turn-in. Neither wallows on the tall sidewalls before responding to the steering. 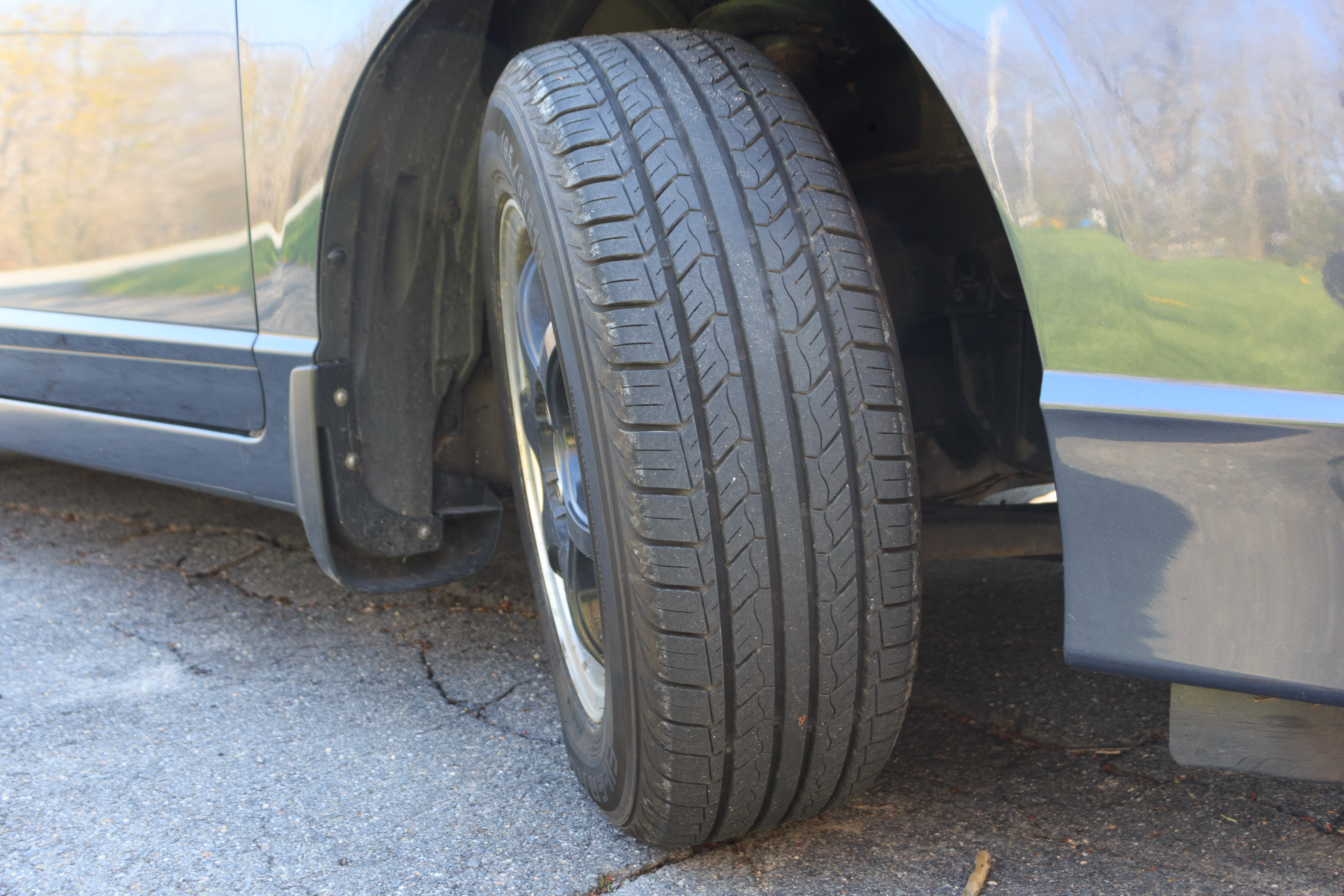 Ride quality is where you can really feel the difference between the tires. The Cilerro feels like it has a much harder tread and carcass compared with the TrueContact. When you hit cracks or expansion joints, it sends a much bigger bump into the cabin, along with a sharp noise. The TrueContacts do a much better job of absorbing those small impacts, making them feel softer and transmitting less noise into the cabin.

The Cilerro tire is also much louder than the TrueContact. The volume difference is enough in a straight line that I have to turn the stereo up, but it worsens if the steering wheel is turned at all. The Cilerro is loud enough when the steering wheel is turned, even slightly, that I had my wheel bearings inspected to make sure that it was the tires and not a bad bearing. Briefly switching to another set of tires showed that the noise was from the Cilerro tires, not the car.

Since I used the Continental tires for their full life, I can say that they maintained similar traction and feel through their entire life. They didn’t get significantly noisier with wear, and wet traction and resistance to hydroplaning were still acceptable down to the wear bars. What they didn’t do was last anywhere close to what an 800 treadwear tire should. They were worn out at under 50,000 km – a far cry from the 145,000 km claimed. The Cilerro tires are still too new to judge, but seem like they’ll last more than a third of their 80,000 claimed life.

So does the cheap tire do the job? The short answer is yes – it’ll get you around safely.

But there’s more to the story than that. The increased noise alone is enough that I would not recommend the Cilerro over the TrueContact to most people. Even for the most budget-conscious, the increase in fuel costs over the life of the tire means that a savings at installation could cost you much more over the long haul. That’s a claim that will hold true for most cheap tires vs most expensive tires.

The Blacklion Cilerro has so far been my best experience with a cheap tire. Some of the others I’ve had over the years have been out of round, wore erratically, broke a belt on the first expansion joint, or offered very little grip. I’ve never had a big-name tire do any of those things. Based on these two sets of tires, I recommend sticking with a known name brand. The ride, noise, and fuel economy justify the cost, even if the tread life is shorter than advertised. But if you want the cheapest tires you can find, you could do much worse than the Blacklion Cilerro. The sacrifice in the name of price isn’t as big as I had expected.