Mario Kart 8 Deluxe and the Nintendo Switch – in the Office Don't be bored in the boardroom.

Don't be bored in the boardroom.

The Mario Kart franchise has been an essential part of Nintendo consoles since Super Mario Kart was released for the SNES on September 1, 1992. Along with the Smash Brother Bros. series, Mario Kart defined pick-up-and-play gaming for a generation that’s seen the definition of “competitive multiplayer” grow from a simple gathering of kids crowded around a television to international events broadcast live from a stadium venue.

With 25th anniversary of Mario Kart’s debut on the horizon, how does the game fare with those same kids now that they’re (technically) adults? We brought Mario Kart 8 Deluxe and the Nintendo Switch to the Trader Corporation offices to find out. 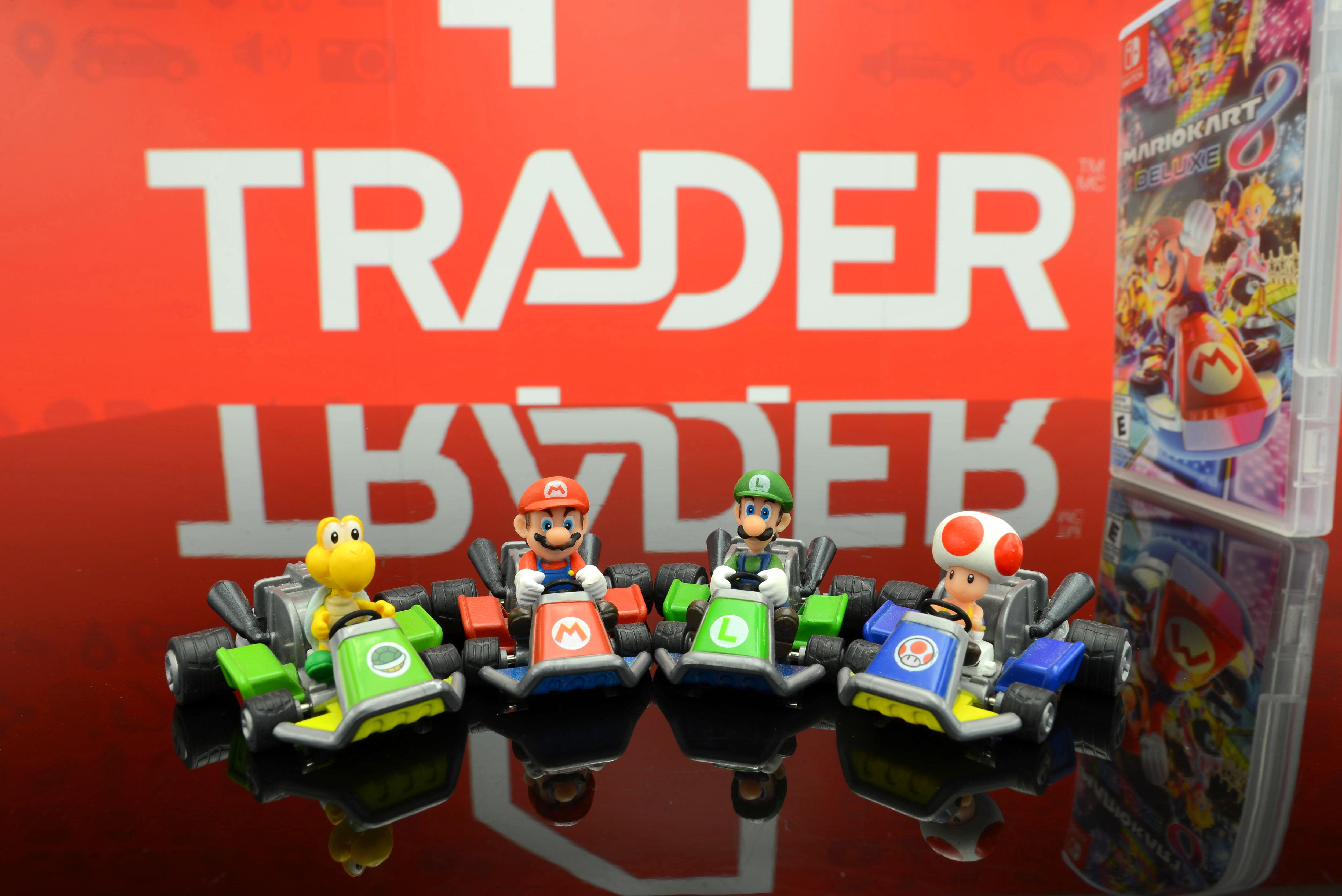 The original Mario Kart 8 was the best-selling game for the Wii U, so it hardly needs any introduction. Along with the tried-and-true formula of high speeds and item-induced mayhem, MK8 also added anti-gravity portions to its race courses, allowing players to (intentionally) travel vertically, sideways and upside-down.

Mario Kart 8 Deluxe for the Nintendo Switch builds on the Wii U version, incorporating the existing DLC – including the classic Mercedes-Benz vehicles rendered in kart form – while allowing players to now hold an additional item while racing. New characters join the roster, such as the Inkling Girl and Boy from Splatoon; while fan favourites return, namely King Boo, Dry Bones and Bowser Jr. More importantly, dedicated arenas for Battle mode make their return, meaning faster-paced balloon-popping, coin-snatching action that isn’t slowed down by having to traverse half of a standard track just to find an opponent.

Beyond the software features, it’s impossible to properly review MK8 DX without discussing the material changes brought by the console itself – the Nintendo Switch.

People will immediately notice and comment on the size of the Joy-Con controllers – “You expect us to play with these? They’re tiny!” After a few minutes of racing, however, no one brings up the size of the controllers again, not even the people who are dead-last from taking a swan-dive into lava. And no wonder – the controllers are wider than most phones these days and recent studies say we spend five hours a day on the latter.

Much ink has been spilled on the portability of the Switch and how it offers traditional console-quality experiences on the go. This is true, of course, and at the end of an office tournament, you can simply pick up the Switch from its cradle, slide the controllers back into place, and keep playing – thereby improving your skills and gaining a competitive edge over your colleagues, exactly like that neighbourhood kid with the N64 – except now you can also opt to keep the controllers out and the tournament can carry on, on the small screen. Let’s just hope you’re really comfortable with your coworkers because you will have to lean into each other to get a good view. It’s meant for quick gaming sessions, say, at lunch, where you’re may not have access to a TV nor the inclination to set up the dock and all the associated cables.

When it all comes together, however – after commandeering a conference room chosen for its big-screen TV, comfy chairs and strangely powerful air conditioning – you can get an adrenaline-fuelled four-player splitscreen race going à la Mario Kart 64, but with much improved graphics and slightly less outlandish controllers. With most games these days offering two-player splitscreen at most, if at all – I’m looking at you, Forza – Mario Kart offers a refreshing dose of inclusion, which is just an HR-friendly way of saying, “We don’t have to worry about someone hogging the controller.” 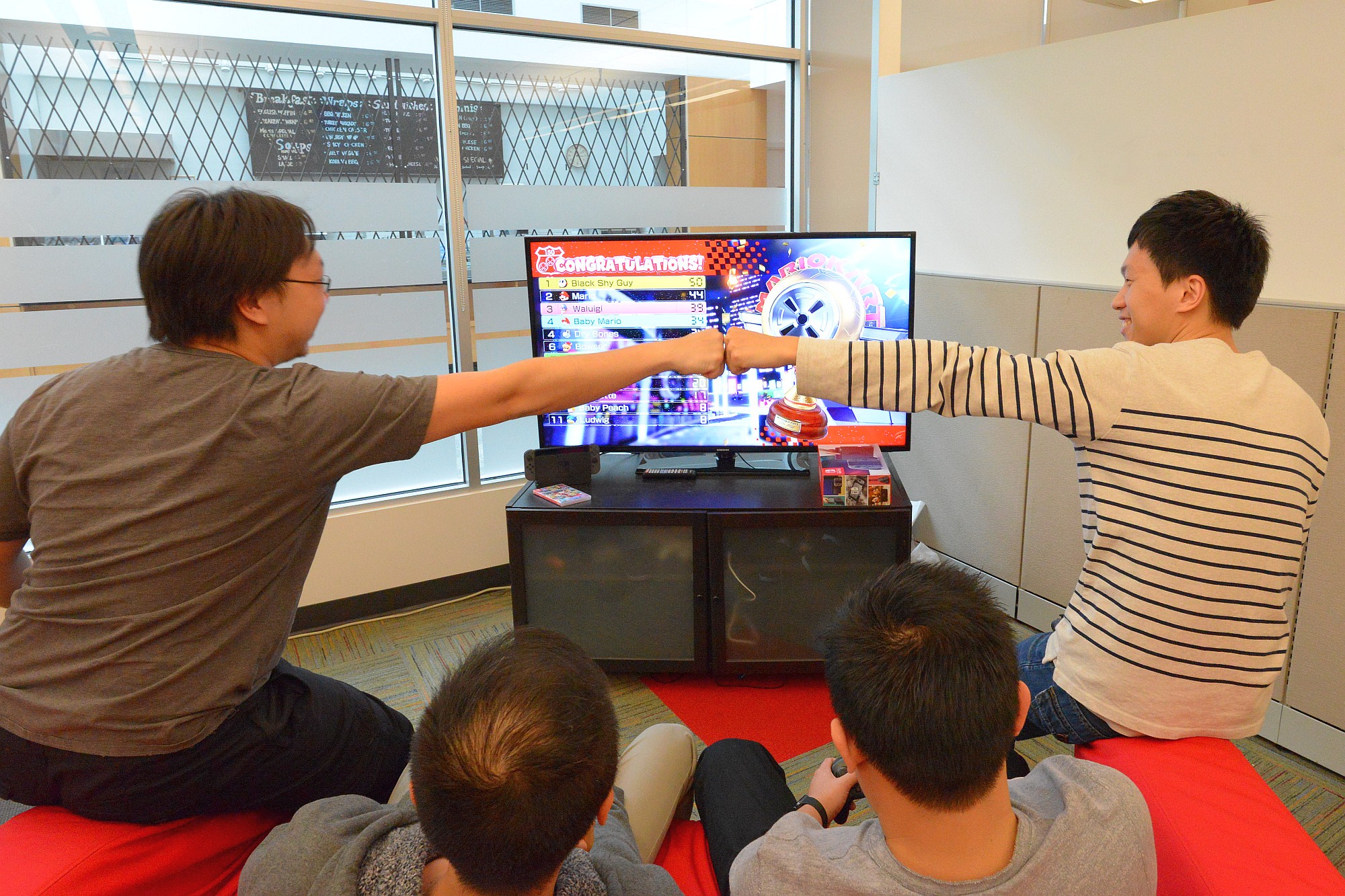 Team-building exercises these days take all forms, from in-office activities to off-site excursions. Our office in Burnaby runs a regular Mario Kart tournament, and I’m told the competition is amiable. Did I say “amiable”? I meant intense. While the ESRB label on the back of the box gives it an “E for Everyone” rating and lists “Comic Mischief” as a warning to parents, there’s nothing really comic about a blue shell taking you out within sight of the finish line, nor the barrage of green and red shells that follow (remember, you can carry two items at once now).

From that fiery crucible, a clear winner emerges, yes, but solid bonds are also forged – united as they were in their goal of taking down the Toronto office in a online head-to-head match.

For the hardcore set with multiple Switches and copies of MK8 DX, there’s a hidden LAN mode that allows up to 12 racers (two per console) to compete locally. For our inter-office match-up, we would have instead relied upon Nintendo’s online service to make the connection between Burnaby and Toronto.

Unfortunately, due to a shipping snafu, that showdown didn’t happen, much to the relief of the Toronto team – we’d discovered the automatic steering and braking driver assists and I don’t know what we’d do without them.

Instead, our merry band of filthy casuals enjoyed an afternoon sequestered in a conference room while a work shindig carried on outside. The occasional curious passerby would pop their head in and become instantly indoctrinated – while the more advanced racing techniques require practice, the controls are simple: this button for gas, that button for brake (but you won’t need it) and this other button to use an item (if in doubt, just mash it). 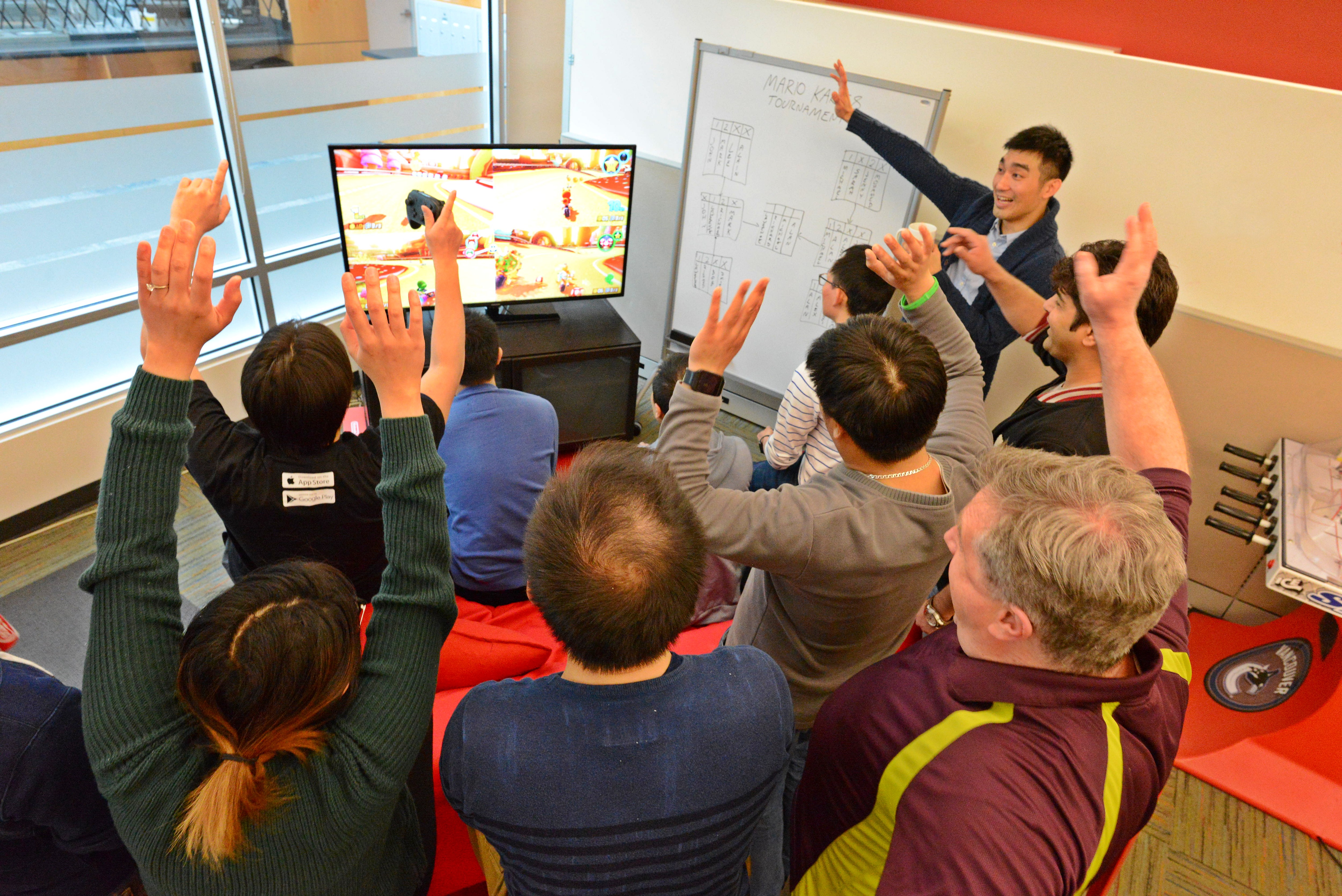 For the gamers at home, Mario Kart is a no-brainer: a single-player challenge that ramps up into frenetic insanity when played with others. Its ready acceptance in a work setting, however, was a surprise. Despite Mario Kart’s many accolades and user-friendly features, there’s a mental barrier traditionally associated with video games, that you have to play them all the time to “get” them or to be any good at them.

What we found over the course of our trial, however, was that observers were easily converted into players – they just needed to find the “go” button and soon they were cackling with delight at firing their first red shell at a hapless officemate. At our afternoon session, the game fostered conversation between peers who normally wouldn’t interact, coming from different departments or different ends of the office.

And it’s designed to take all comers – the four-player splitscreen allows for more participants than traditional head-to-head multiplayer – while the Switch console itself aids in this regard by coming with two controllers built-in. Network multiplayer increases the field even further.

For most players, Mario Kart 8 Deluxe presents an experience that’s simultaneously new and familiar. The long history of the Mario Kart franchise means that most people have played at least one of the previous iterations. Even for complete newcomers, the simple controls and clear graphics mean that getting up to speed will only take one lap of a race track. It’s interactive, empowering, competitive without being adversarial, and provides mechanisms to level the playing field – sometimes literally.

We’ve changed the setting from the living room to the conference room, but the charms of Mario Kart remain: it’s a game that anyone can pick up and play.

Before I forget... did I mention we're running a contest? That's right, autoTRADER.ca is giving away four Nintendo Switch consoles, each with a copy of Mario Kart 8 Deluxe!