No top up North.
Advertisement

No top up North.

At 150 years old, Canada is pretty much a geographic toddler compared to most nations, but as Canadians, we’ve crammed a lot of greatness into the past century and a half. More than that, as a collective body of interesting people, culture, and stunning physical geography, Canada is pretty unique.

It’s a darn big place, too, and if you plan to explore it in any detail, you’d better have a lot of time.

We didn’t have a lot of time.

Mercedes-Benz Canada wanted to celebrate our great nation by offering up several of their convertible-top models to a half-dozen Canadian automotive journalists and pay our vehicular respects in each of the ten provinces.

To drive coast-to-coast along the Trans-Canada Highway measures in somewhere in the neighbourhood of 7,500 km. According to Google Maps, if you left St. John’s right now, you’d arrive by car some 85 hours later in Victoria, BC. That’s only three-and-a-half days. That is, as long as you drive straight through and don’t stop to fuel your car, eat, sleep, or pee.

Since Mercedes-Benz hasn’t yet developed a convertible that can be driven 7,500 km without refuelling or recharging, and due to the limitations of human physiology, we did need to stop, several times in fact, and could thus only manage to do the trip in six days (and with the help of several short-hop flights).

Despite “cheating” by jet, we still amassed more than 1,500 km of driving in less than a week’s time, in what often felt like a pretty torrid pace. And while very brief, we did get at least a small sampling of the tremendous diversity this country possesses within its 9.9 million square kilometres of area.

I’ve had the great fortune of travelling all over North America, several trips throughout Europe, to Africa and Asia, and yet, until this trip, Newfoundland had always eluded me. 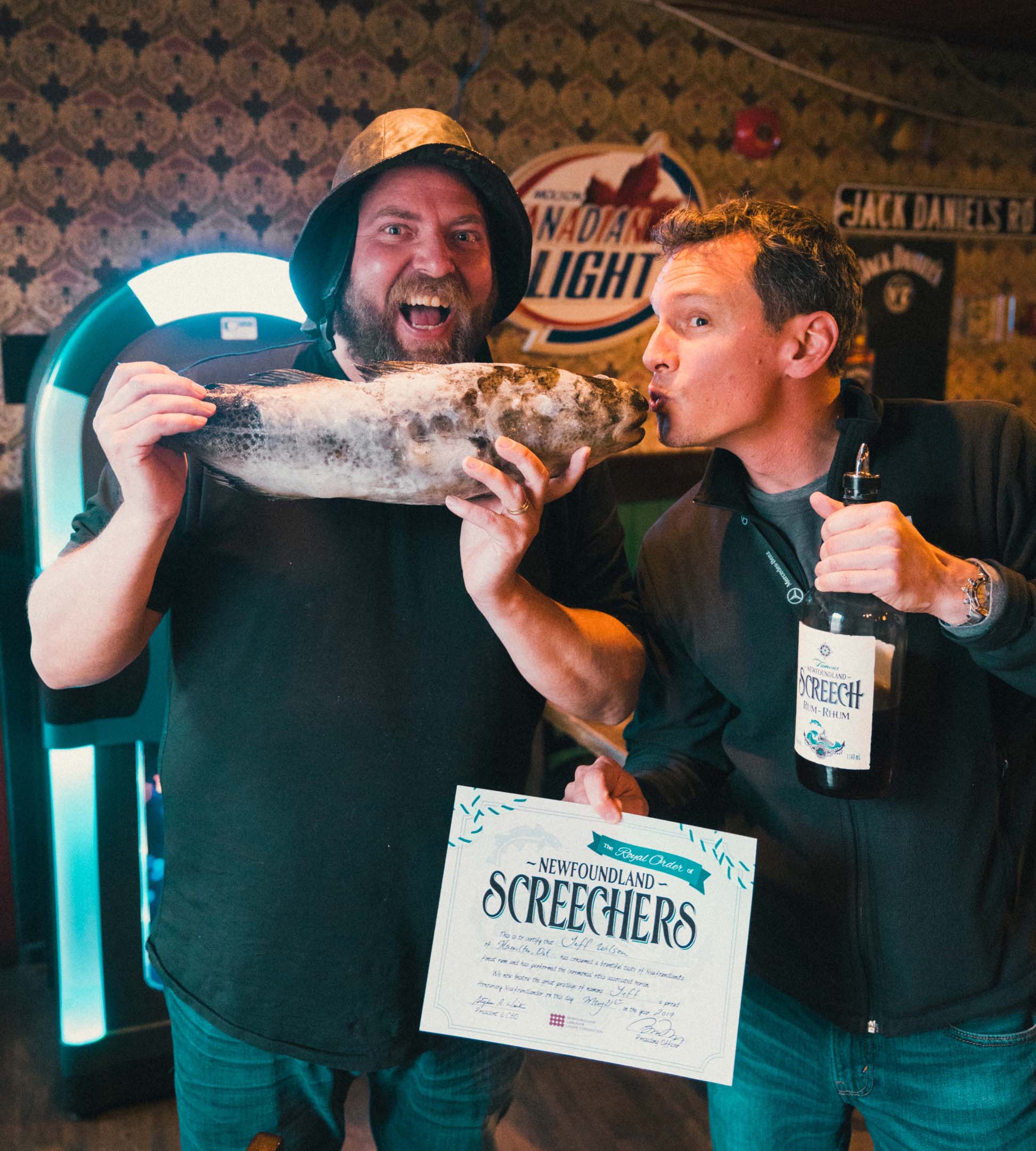 Despite much of the rest of the nation enjoying early glimpses of summer weather, we started our journey being blown around St. John’s tourist stops by 70 km/h gusts coming off the North Atlantic, and bringing a few snow flurries with it.

Being Canadian automotive journalists, we weren’t intimidated by a bit of East Coast Weather, and patiently took turns driving around the architecturally stunning The Rooms museum and gallery with the top down on a 2017 Mercedes-Benz C 300 Cabriolet. It seemed only right that we get at least a little seat time in each of the provincial capitals.

Each of our entourage were made honorary Newfoundlanders at a local “Screeching In” ceremony, replete with cod-fish-kissing and rum-consumption, before bedding down very briefly and catching an early flight to Halifax, Nova Scotia. 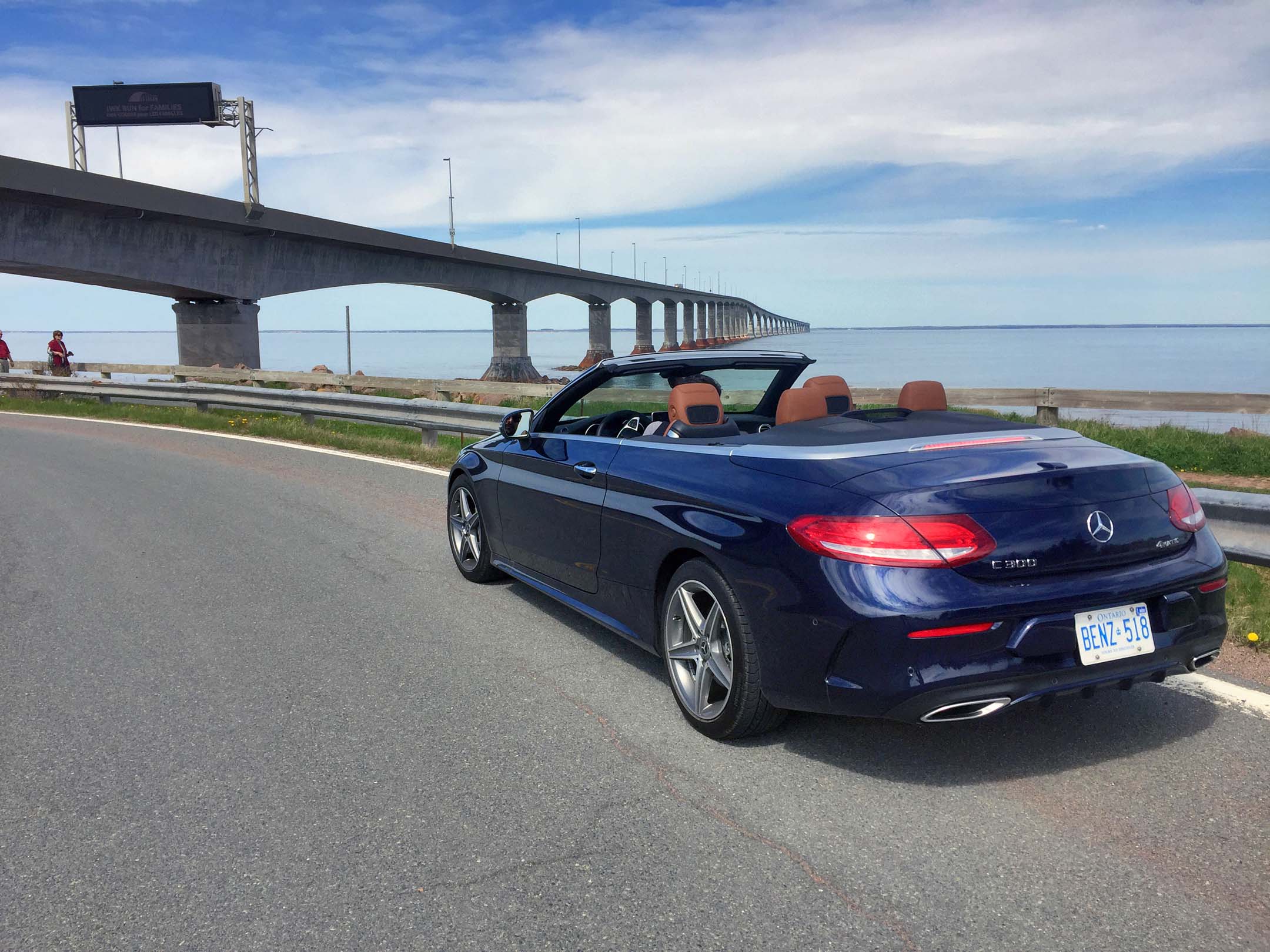 Day two started with my driving partner and I setting out in a gorgeous blue Mercedes-AMG C 43 Cabriolet. With three capital cities to hit in the same day, we made short work of the Nova Scotian highways and bee-lined straight for Pictou, and the ferry to Prince Edward Island. Once there, we’d enjoy little more than a lunch in Charlottetown before moving on to the Confederation Bridge and New Brunswick.

The C 43 was a hit with both my driving partner and I, as we enjoyed its comfortable accoutrements (like the AirScarf feature that blows warm air on the front seat occupants’ neck and shoulders) and an obscene exhaust noise that made motoring around in Sport Plus mode, such fun. It’s plenty quick, too, living up to the image its noisy exhaust proclaims.

This is probably also the time to tell you that the Mercedes AirCap feature – a combination of rear wind mesh screen, plus a pop-up screen that rises out of the top of the windshield – has been met with mixed emotions. When in use, the AirCap looks ridiculous: like wearing a hat that’s comically too small. But, when in use, it also works really well, dramatically reducing wind buffeting and keeping the cockpit much more comfortable. As much as I hate the look of it, I know I would still have the hat that blew off my head at the mid-way point along the Confederation Bridge, if my vanity hadn’t prevented AirCap’s use at that moment. 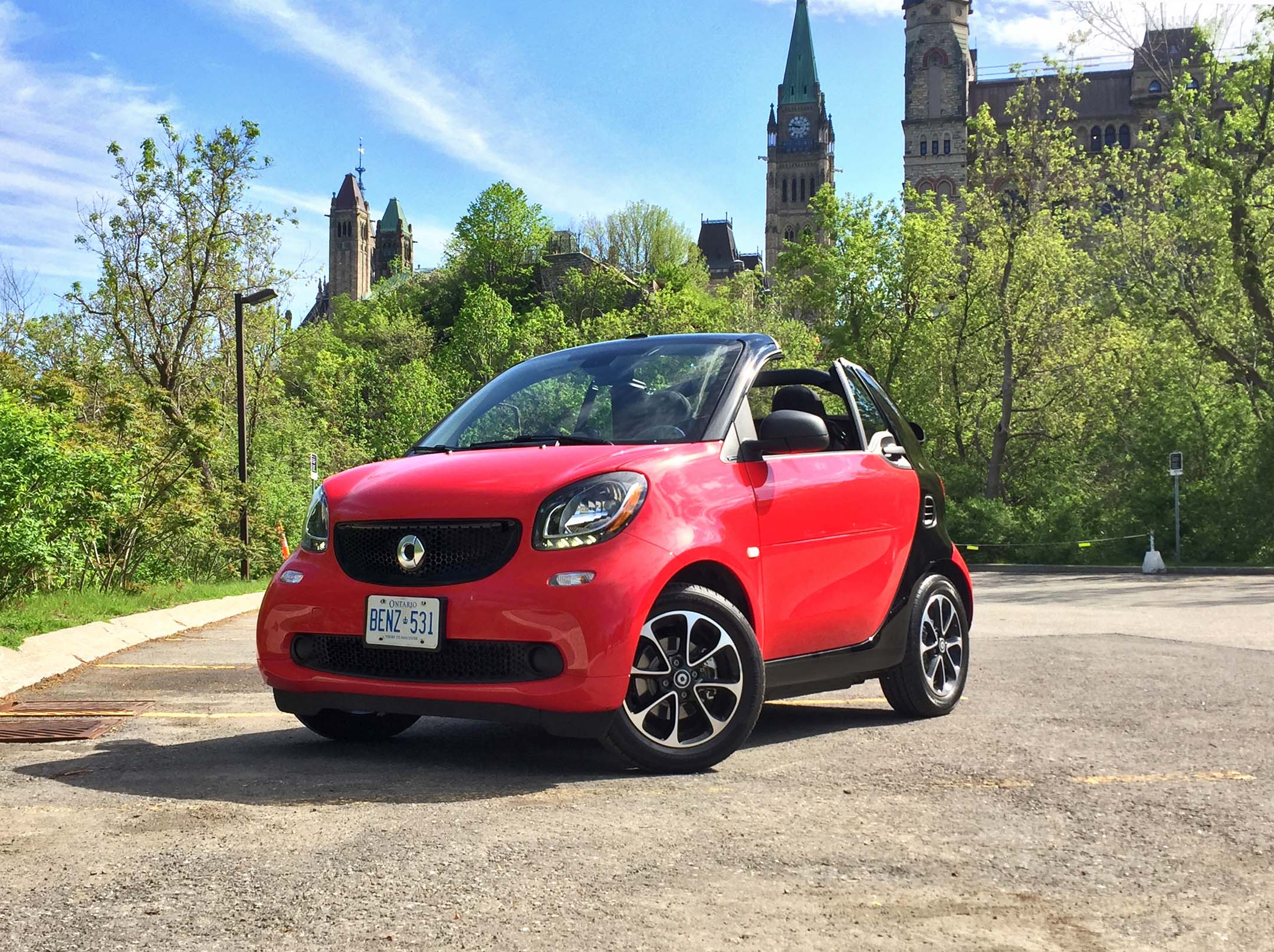 Our third day began with another early rise and another early flight, this time, hopping over our daily destination and landing in our nation’s capital. Retrieving the keys at the airport, we chose a bright red 2017 Smart ForTwo Cabriolet for the journey toward Quebec City, but not before stuffing ourselves at the decadent breakfast buffet in the Chateau Laurier in downtown Ottawa.

The route had us pacing the north side of the Ottawa River, whose banks had swollen and overrun farm fields and low lands due to record rainfall this spring. It’s beautiful countryside and there are still many parts of Quebec that feel very European to me – not just because of the language – with Quebec City being the pinnacle of that. Unfortunately, the journey took longer than anticipated, and we still had yet another flight to catch to Toronto before the day was done, so there was virtually no time for exploring.

The Smart Cabrio, while far from being in its element on a hurried, high-speed, highway blitz, impressed us. Previous generations of the Smart have been unnerving at best when driven at highway speeds, but this new generation, while still obviously afflicted by the tiny wheelbase and tall profile, is worlds better than the outgoing model. And despite being pressed to some formidable speeds throughout the trip, the Smart still delivered a fuel consumption average of 7.0 L/100 km. 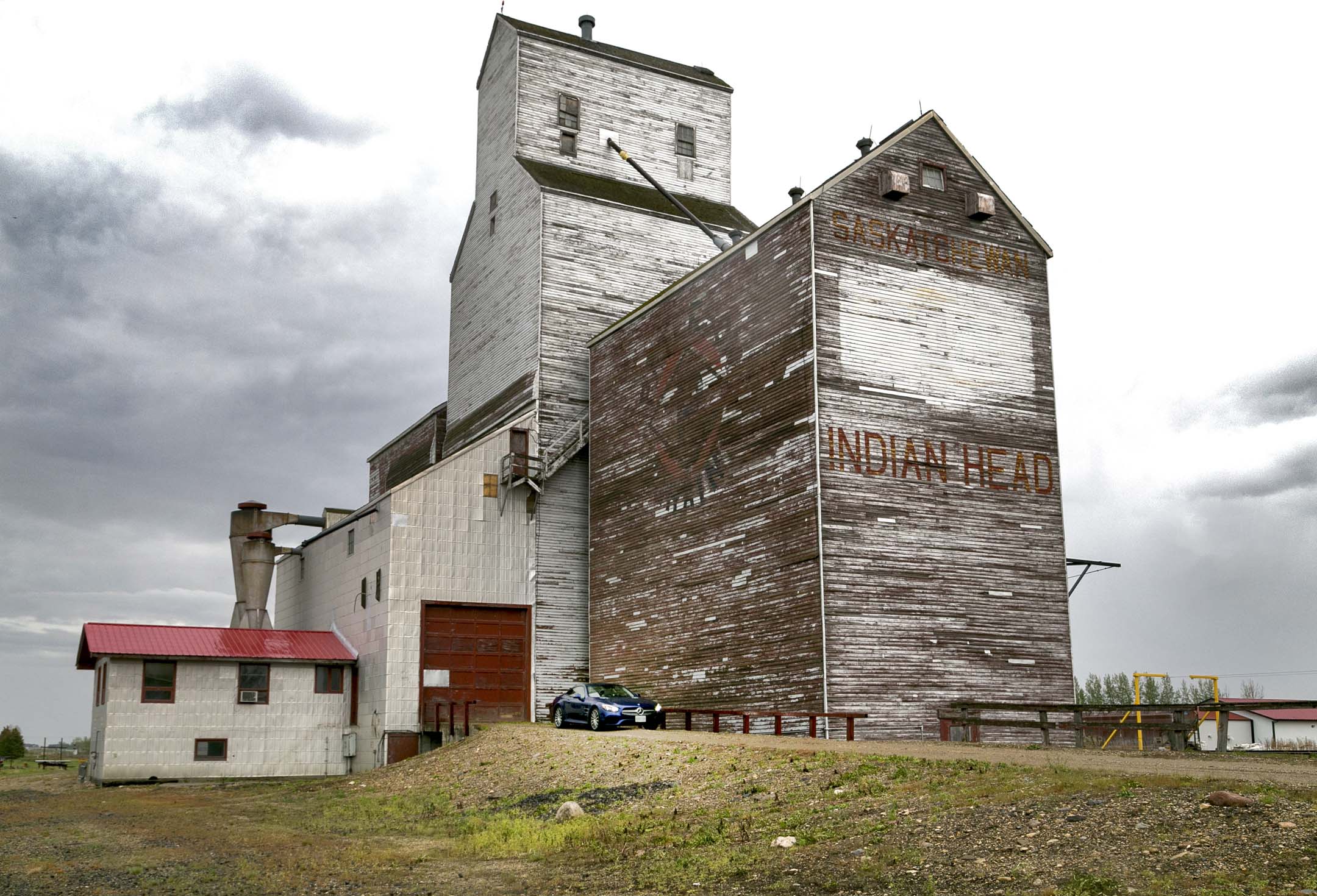 Before we knew it, we were collecting the keys to a new set of Mercedes convertibles in Winnipeg on day four. Having paid our dues the day previous with the Smart, we elected to go for a machine ideally suited for a speedy romp across the prairies: a Mercedes-Benz SL 550.

After a few great photo spots in and around Winnipeg’s The Forks area and the Canadian Museum for Human Rights, we continued west while a fierce southerly wind whipped piles of dust at us for hours until our respite for lunch at the funky restaurant, The Dock on Princess in Brandon, MB.

Mercedes has introduced a cross-wind mitigation function that proved its worth without a doubt that day. When the adaptive cruise control wasn’t armed and we were left to actually drive the car, nearly constant corrections were required to keep the SL rolling straight and true. Again, this is no fault of the car, but rather the relentless battle against the wind. With the crosswind mitigation in use, the drive became much more relaxing, even at very elevated speeds.

Into Saskatchewan, we drove into a good ol’ prairie thunderstorm, that didn’t deter us from snapping photos in front of the old grain elevator at Indian Head. Unfortunately, it did require us to put the top up on the SL – the first time so far this trip, and a fact our friends (and our Senior Editor) on social media suggested meant we had wussed out because of a little rain.

By the time we reached Regina, the sun had re-emerged and a beautiful summer’s evening welcomed us to the historic Hotel Saskatchewan. With rooms overlooking the large, lush Victoria Park and top-shelf staff, these accommodations are well worth considering if you’re in the area. 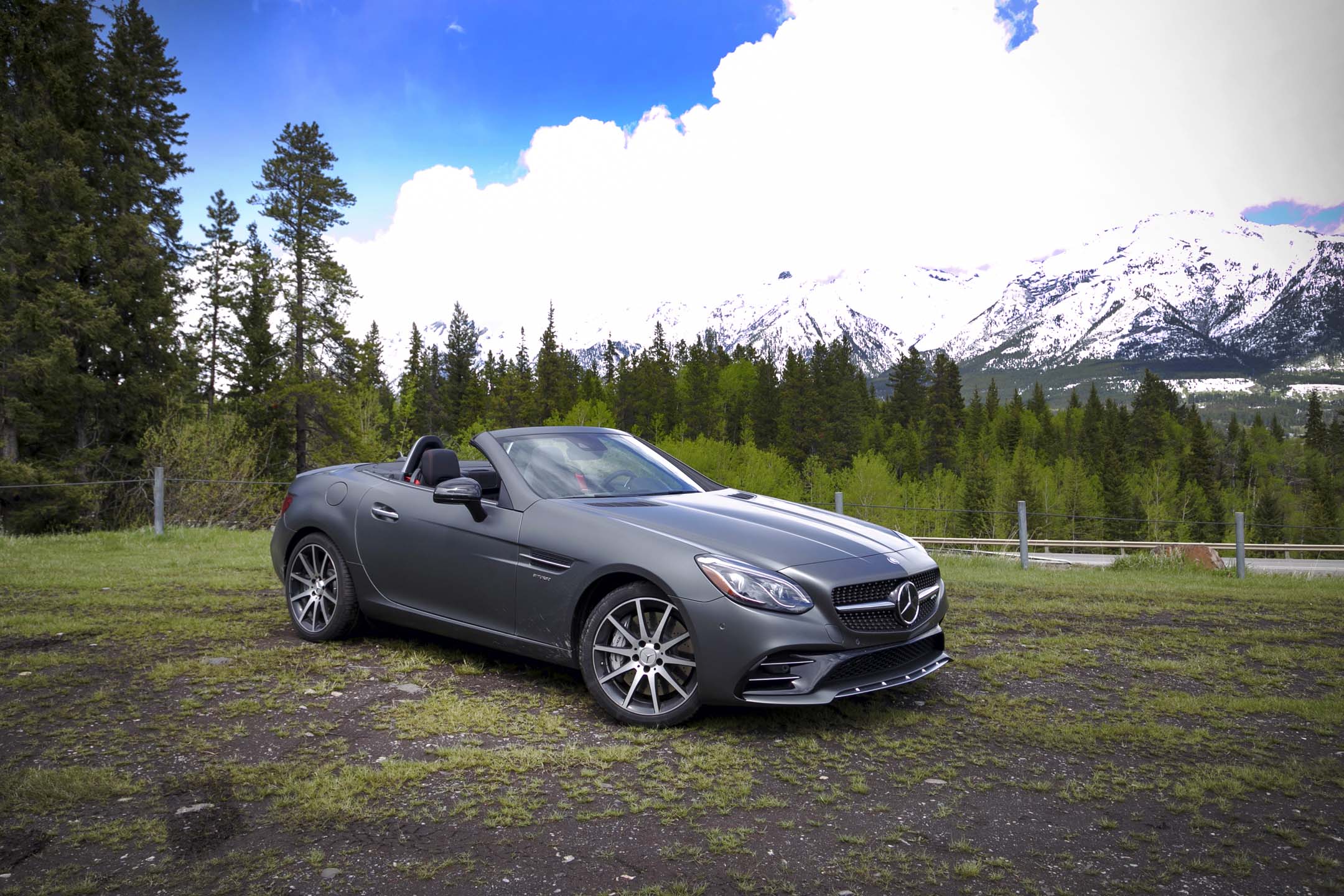 With another two flights bookending our fifth day, the pace was frantic once more in Alberta, as we seemed to always be behind schedule. We picked the right car for making up time, however, with the compact Mercedes-AMG SLC 43 proving to be both nimble and quick. And after suffering the previous day’s abuse about raising the top, we were hell-bent on keeping it stowed, even when heading into the mountains and racing through rain, sleet and snow in order to get our requisite shot of the Canadian Rockies.

Nine of ten provinces checked off the list, we hopped a flight from Edmonton to Vancouver, anticipating our final day of driving the next morning. 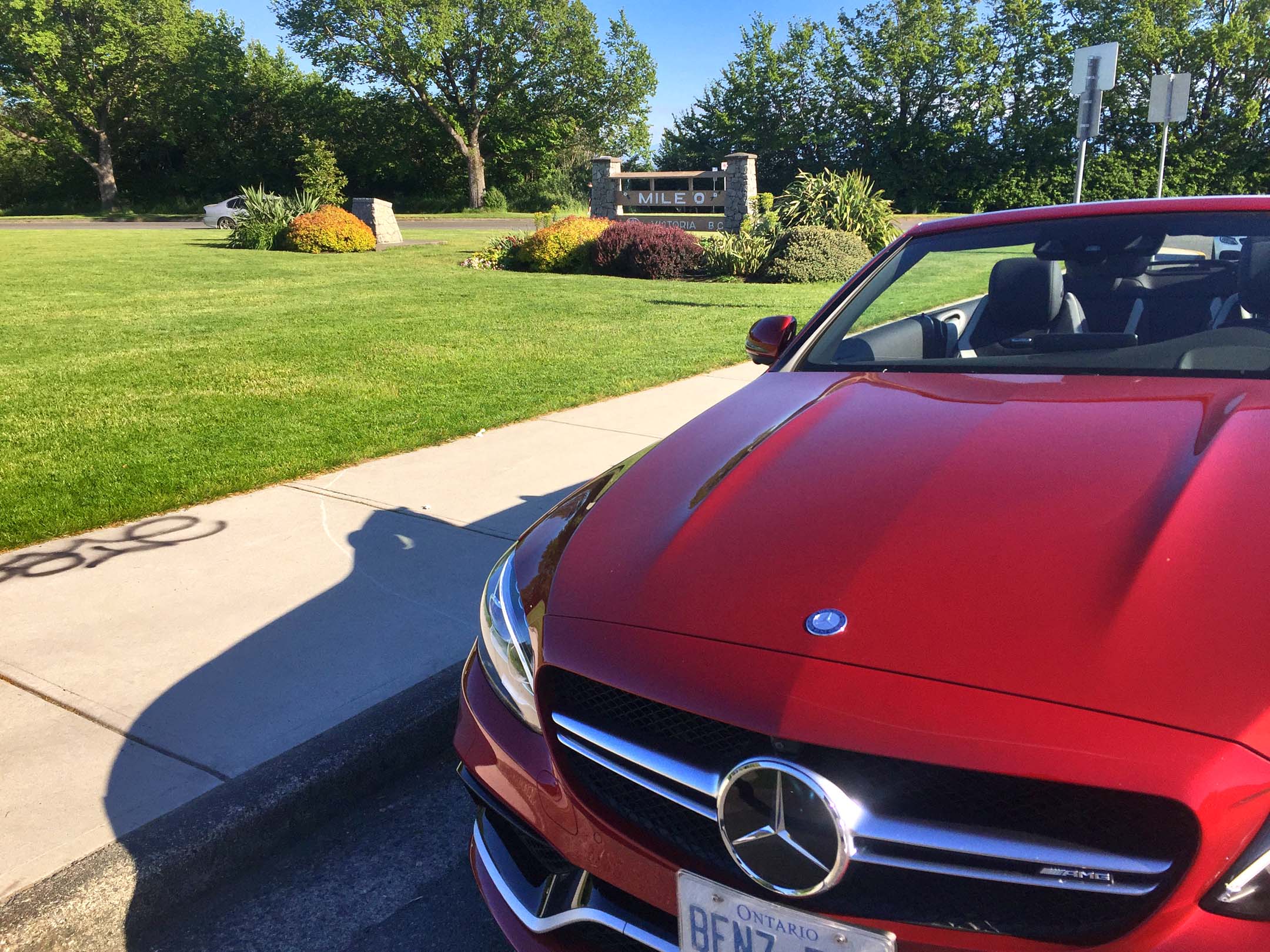 Mile 0 in Victoria, BC

Balmy temperatures and uncharacteristically sunny weather on the west coast meant that there was no bad choice of car amongst those offered. Nevertheless, we spent time on the mainland in another SL 550 before snatching the keys to an AMG C 63S Cabriolet away from our compatriots at a stop at Shirley Delicious – a great little hideaway serving decadent snacks, powerfully good espresso and playful banter from the great hosts.

With no specific schedule to adhere to, this final afternoon was by far the best of the trip. The beautiful winding roads through the dense Vancouver Island forests kept us challenging our cars, while we sought out ever-better photo stops along the coast.

At last, having settled into The Empress Hotel – we sat as a group having dinner on the restaurant’s balcony overlooking the harbour in Victoria. Highlights of the trip were shared amongst the sort of playful banter one expects from friends who have overcome a challenge together.

Some common themes were also shared: Canada is a big and beautiful place; one that we’re all fortunate to call home, regardless of which part we reside. Exploring Canada deserves much more time than we afforded it and we’ve all got a greater appetite for doing so. And doing the journey in a new Mercedes-Benz – especially a convertible – is one of the best possible ways to do it.