If the reviews from owners and experts are any indication, the Porsche Macan is a seriously well-balanced package. One that does what it’s supposed to do, very, very well. One that ticks all the right boxes. One that’ll be many things to many people, and an authentic Porsche on top of it all. The one Goldilocks would probably choose if she was in the market for a sports crossover.

Styling is elegant, quiet, discreet, understated and dotted with unique touches that reward detailed visual inspection. On board, the cabin is authentically Porsche: athletic, nicely trimmed, comfy and sporty-snug and with signature styling elements in place, including the lengthy console of centre-mounted controls, and the left-hand-side ignition switch.

The one Goldilocks would probably choose if she was in the market for a sports crossover.

And although, for the money, one could find a crossover ute that was bigger, or faster, or more off-road capable, or one with a higher towing capacity, as an overall sporty premium-ute package, the Macan is a compelling product. For what most shoppers want from their sporty little premium ute, most of the time, the Macan should hit the mark.

Macan feels like a Porsche, too. The seven-speed PDK transmission shifts in fractions of a second with beautiful rev-matching in both directions. The 3.0L twin-turbo V6 sounds gorgeous, floods the cabin with rich, blurty exhaust noises, and flings the Macan along in a serious 340 hp rush.

And the handling? Almost nobody driving a Macan will take theirs on a racing course, but if they did, they’d find a machine set up very nicely for the job. It’s a frisky bit of fun: for the slightly-stiff suspension setup on rough roads, composure and stability at high speeds benefit in a disproportionately positive way on a course. Body-roll occurs as you dial in a steering input around a bend, after which point the Macan takes a set, stays flat, and darts around like nobody told it that it was a crossover SUV. That’s backed by a steering that’s heavy but quick, which is to say, confidently mischievous.

It feels locked on and stable and surefooted when driven hard, and really push it, and you’re treated to limits that can be explored with a grin and a giggle – not a common attribute of most crossovers. Really give it some heck, and Macan loves to slip and squirm and shift on its contact patches as you adjust its angle via the steering and throttle and brakes.

In very hard driving, those brakes exhibit negligible fade, and even the engine coolant temperature barely goes up three degrees after numerous hard laps. Durable performance, and all that. It’s not a stretch to suggest that the track-bred durability and ability to keep the fluids cool and deal easily with harsh conditions can be useful to a crossover owner that’s, say, hauling a heavy trailer on hilly terrain.

So, I drove this Macan S in the summer, on the highway, and on a race-track, and on an off-road course with rollers to simulate a challenging zero-traction-under-two-wheels situation, in which the Macan walked up and away without much fuss. In all of these conditions, an athletic and comfortable confidence shone through.

I’ve just had another shot at the Macan, taking the tester home to Sudbury for a second time, now in mid-January, for a winter test.

Wearing a set of Pirelli Scorpion Winter tires to generate more grip for Macan’s rear-biased AWD system, the winter driving character to the machine is apparent from even a quick spin in the snow.

As expected, the AWD and Porsche Stability Management (PSM) systems work in seamless sync. You’re pulling out of a snowy parking lot onto a bare road with your boot down a bit. There’s no traction, then, suddenly, there is.

“Bro, could you fire some more power up front?” says the PSM system to the AWD. “Looks like you’ve got grip up there, and I don’t wanna put on the brakes cause that’s a pain in the ass and driver-dude seems to want to hustle”.

“Ya sure bro, I got it, no probs!” the AWD system replies, clamping its clutches together to send more power frontwards to the now-gripping front wheels.

Or, if you prefer, tap the PSM OFF button and everything shuts down, in a single stage, without having to hold the button for seven hours, enter a secret code, fax some paperwork to Porsche, and provide a DNA sample.

This happens in milliseconds, and negates the need to apply braking or throttle-numbing, which are lousy when you’re trying to get moving. Macan, in most situations, first tries hard and often effectively to find traction with some power redistribution in the AWD system, rather than by cutting power and adding brakes. There’s even a slick torque-vectoring system in the rear differential that mechanically over-drives the outside rear wheel in hard cornering, helping the Macan turn, in addition to your steering inputs. This makes it feel even livelier, still.

And that’s the core of the playful feel you’ll find here, and part of the reason the Macan maintains its connection with the enthusiast driver, even in the winter. Where some crossover models are tuned and calibrated to feel as clamped-down, locked-on and bolted to slippery roads as tightly as possible, the Macan prefers to dance around a little. It takes little in the snow to get a naughty, squirmy, tail-happy and active dynamic going on, and the PSM system leaves drivers alone if they get a nice slide happening, provided they hold it well, and don’t panic-steer or panic-brake. 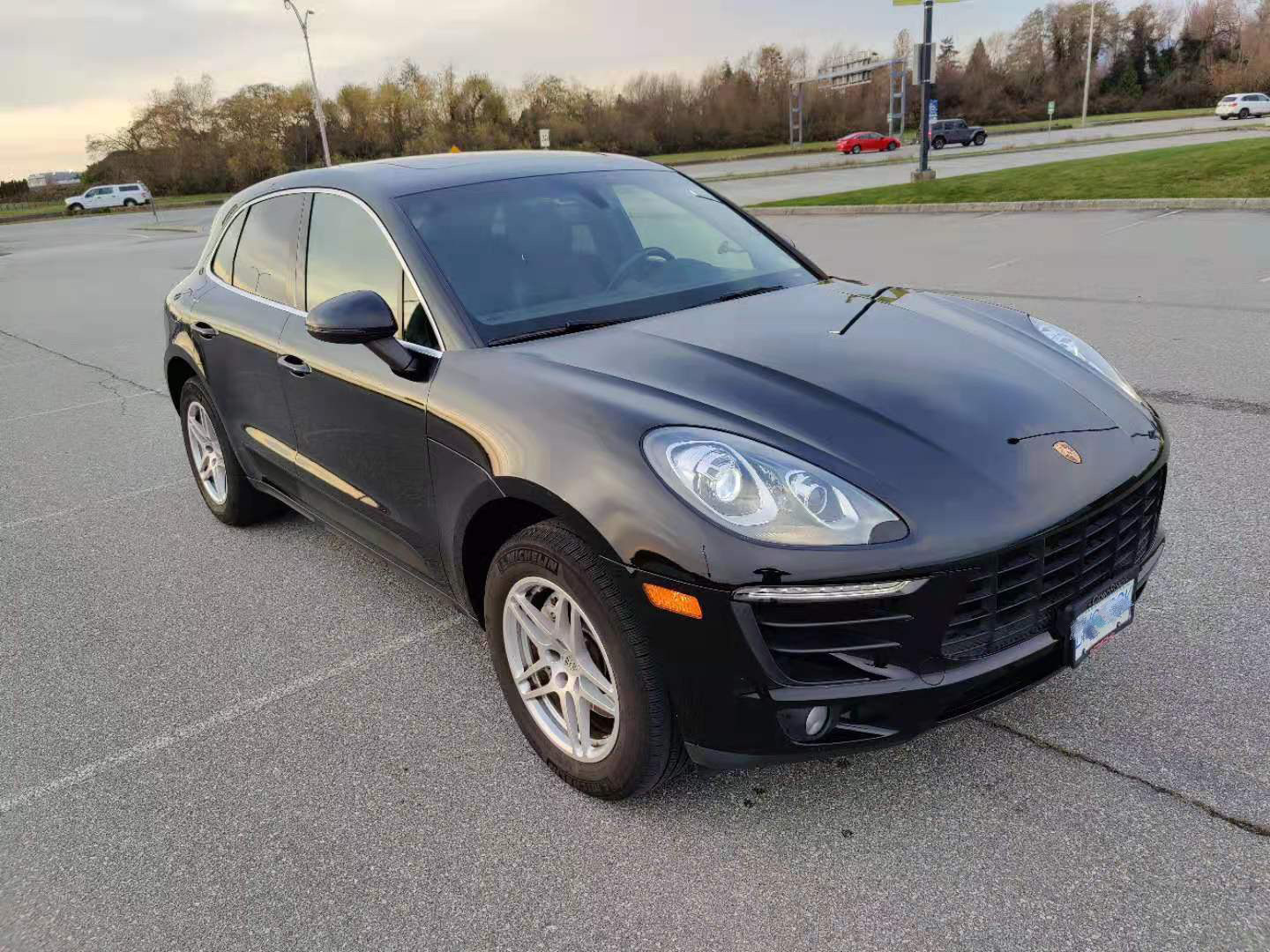 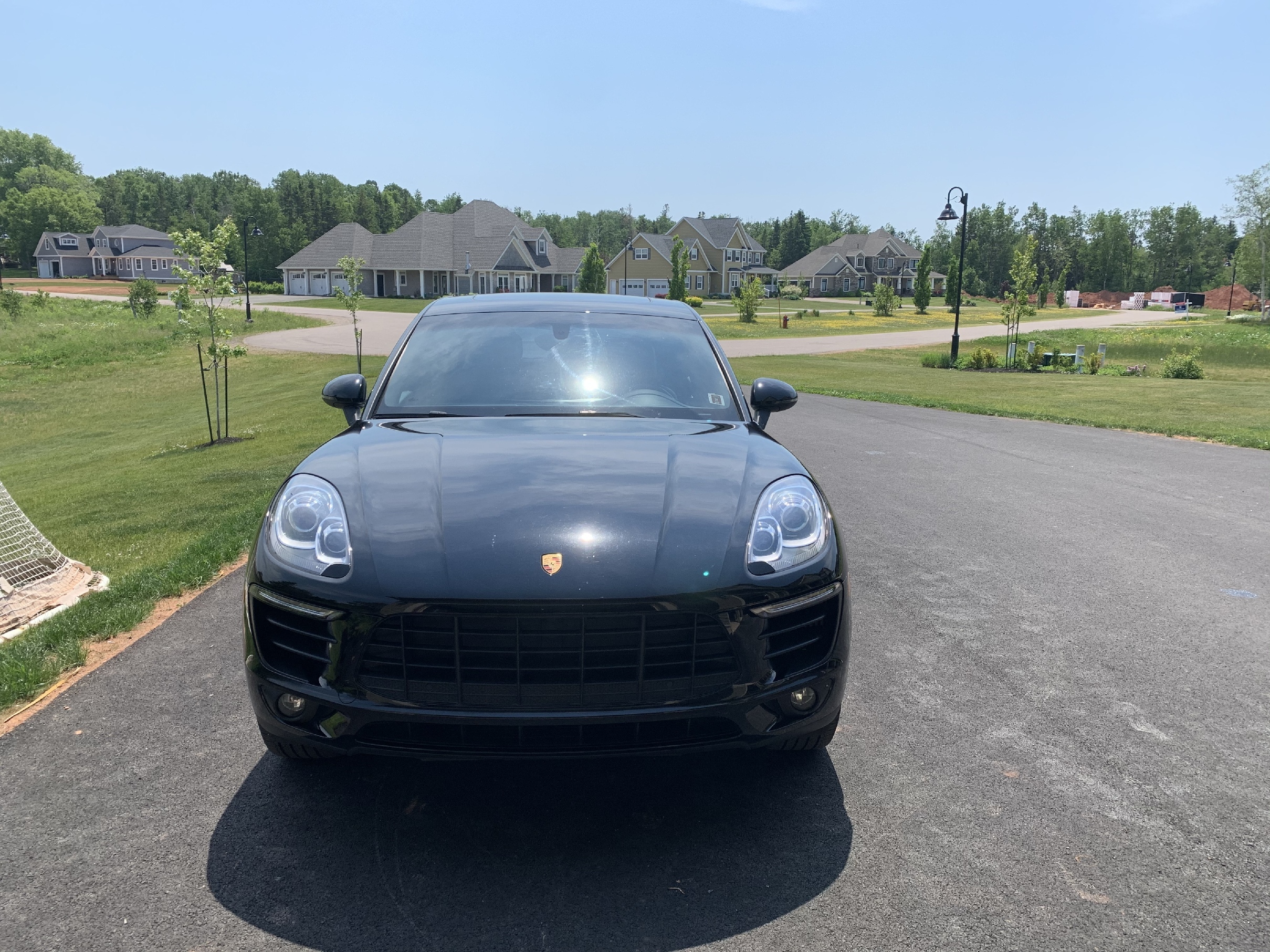 Or, if you prefer, tap the PSM OFF button and everything shuts down, in a single stage, without having to hold the button for seven hours, enter a secret code, fax some paperwork to Porsche, and provide a DNA sample.

The ABS system is the most refined and discreet I’ve yet used this winter, with virtually no noise, no fuss, no dramatic vibrations through the vehicle, and no indication that they were doing anything other than a slight buzz at the pedal. The relatively high-up driving position sits nicely between “confident view of the road ahead” and “car-like enough that you don’t feel like you’re driving a tank”. The steering balances its quick ratio and heavy effort well, making it easy to keep the Macan stable on its line when you’re driving at speed, carefully, on a snow-covered highway.

And, as it is on the track, on bare highways and anywhere else, Macan is one of those machines that talks to you. You feel the wheels losing traction as it happens. Drivers who prefer to be informed by their vehicle, and involved actively in what’s happening between the tires and the road, will love it. Those after a compact crossover with an inflated feel of weight and heaviness for added winter confidence may not.

Truly, thanks to proven Porsche technologies and the authentic athleticism dialed into the thing, Macan might be the best value on the road in a sports crossover today – and it loses nothing moving from summer to winter.

Macan isn’t a big crossover either: it’ll haul two couples off for a weekend road trip, or to the slopes, with ease – though the cargo space loses some space towards the ceiling (thank the steeply-raked tailgate), and front seat space is adequate, not generous. Ditto rear seat space. It’s a sporty snugness, not tight for your 5’11, 220 lb driver, but not a machine you’ll likely be stretching out in.

Complaints? I longed for a set of xenon headlamps at this price point, though my tested world-class performer drove behind old-school halogen after dark instead. Lighting output is adequate at best, and no washer system was included. Further, Macan’s cabin tightens up quickly if you’re wearing heavy winter clothing, and the suede seat inserts are grippy – a good thing for cornering at speed, but less so for slipping in and out with ease.

Starting at $54,300, this Macan is the entry-point to the Porsche brand. And where its big bro, the Cayenne, was initially conceived to keep 911 and Boxster owners in the family when they needed a luxury ute, this Macan, with an authentic Porsche look and feel, will work from the other side of the market: attracting and developing driving enthusiasts into future ownership of pricier Porsches.

When authentic world-class performance is a higher priority in a luxury sports crossover than generous feature content, the Macan S should be on the top of your ‘to test drive’ list.

About Justin Pritchard
Justin Pritchard is an automotive journalist, consultant, TV presenter, and photographer based in Sudbury, Ontario.
Follow me
You may also like
8.8
AdChoices
Latest Articles