Without a doubt, one of the most common questions I get asked, when people find out what I do, is: “Have you driven a Tesla?” For what felt like forever, I would answer with a hangdog expression and bitter disappointment in the negative.

Well, Tesla has cured me.

It was also Consumer Reports Best Car Ever Tested. I’m not sure if that’s a real award or just a ridiculously cool accomplishment, but there you go.

Tesla has converted me. Okay, I lie, I was already a convert, essentially since it leaped onto the major magazine’s test circuit, glowing review after glowing review, crowned by winning Motor Trend’s Car of the Year and Automobile Magazine’s Automobile of the Year in 2013. Oh, and it was also Consumer Reports Best Car Ever Tested. I’m not sure if that’s a real award or just a ridiculously cool accomplishment, but there you go.

I ate it all up, reading everything I could find, from geeky battery threads to the drama with New York Times’ questionable reporting… But what truly sealed the deal was The Oatmeal’s brilliant tribute to the Model S that he bought. The Oatmeal isn’t an automotive journalist, and relates that his enthusiasm for all things automotive was stifled at an early age. But he bought the car, and it’s an insight into both his beautiful and bizarre imagination (he’s essentially a cartoonist in Insane Mode) and the reasoning of at least one owner, and perhaps many more. 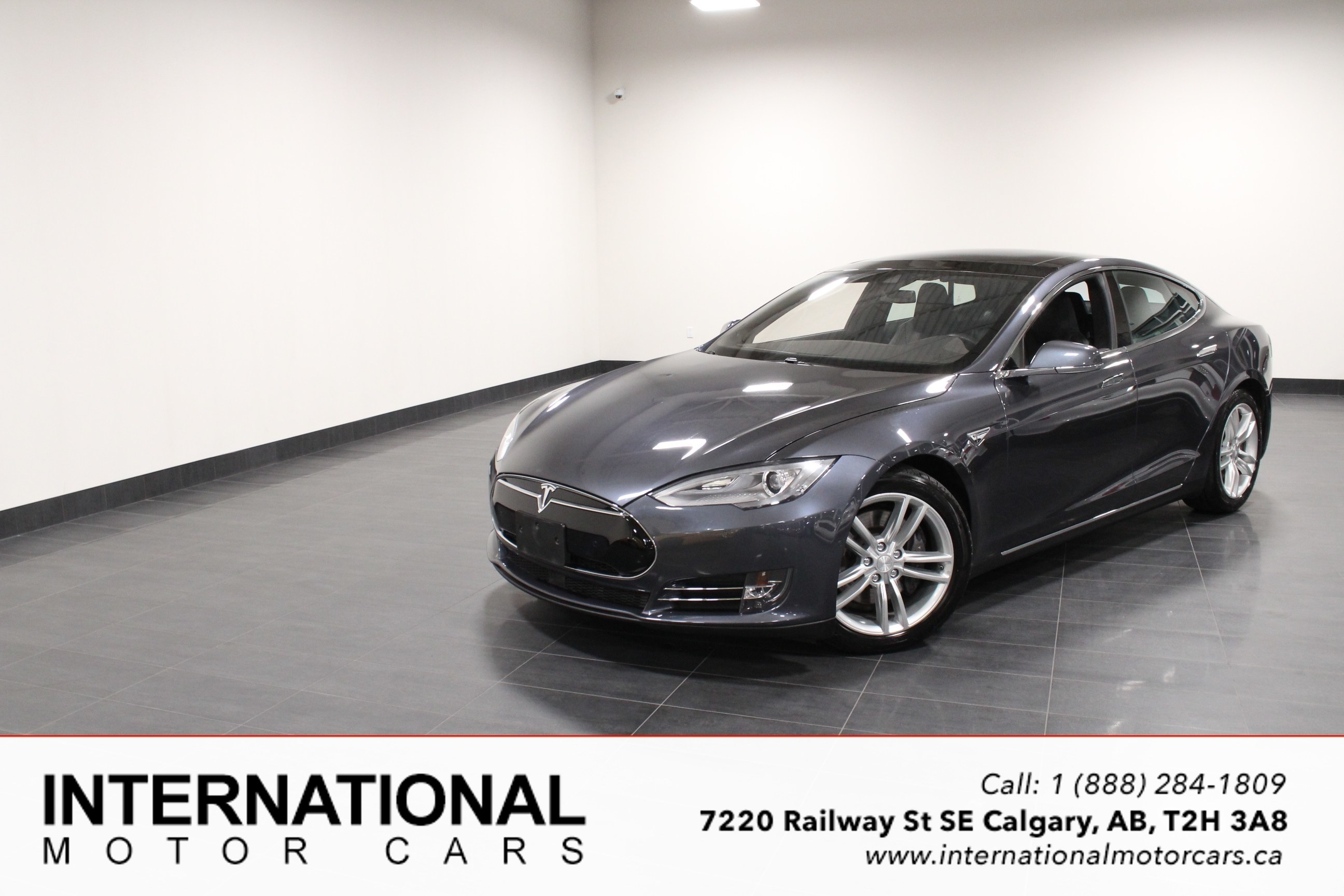 While some people put the Tesla up on a pedestal and deny that it has any competitors, it still has four wheels, four doors, costs at least $75K here in Canada and has at the very least 329 hp, so let’s take a moment to look at it as simply a car, even though we all now realize it is really an Intergalactic SpaceBoat of Light and Wonder.

As mentioned, the Model S lineup starts with the $87,200 70D, with all-wheel drive and 329 hp and accelerating from standstill to 100 km/h in 5.4 seconds. Of course, Tesla wouldn’t stick me with that slowpoke, and the vehicle they have committed to automotive media in the P85D, bumping horsepower up to 691 hp and accumulating 686 lb-ft of torque from a 221-hp motor on the front axle and 470-hp unit at the back. It starts at $121,300.

In Insane Mode (Tesla’s clever name for their more aggressive throttle response/power delivery setting), those 691 hp and 686 pounding feet will pick you up, rearrange your molecules and place you at highway speeds in 3.3 seconds. There is only a subtle high-pitched whine and whirr, and your brain spurts out of your ears in geyser of grey matter splattering the window and passengers. There is no tire spin (the computer will not allow it; after all, why waste energy?), there is no slow rolling wave of torque – it is simply a wall of crushing force catapulting you to silly speeds at levels of acceleration never experienced without afterburners or rocket thrusters or custom drag-racing machines.

So yeah, Insane Mode lives up to its reputation, but even in plain old Sport Mode, this is one fast car, with the handling chops to keep up when you find a corner to tackle. With most of its 2,239 kg below knee level, the P85D stays as flat as the road its stuck to, and with traction at both ends powering out, it rockets out of corners like a slingshot effect in a clichéd sci-fi escape-from-a-black-hole scene. But wait just a second there – did you say 2,239 kg? Holy crap that’s heavy! Forget M5 or RS7, this thing clips the Mercedes-Benz S-Class long wheelbase and even weighs more than a base Range Rover!

Funny thing is, you wouldn’t know it to drive it. The steering is Audi light, with that same precision and feel, a great companion to the supernatural handling effects. The signature 21-inch turbine wheel option gives our P85D a fitting look and graces it with even greater stick and stance, and while the ride is firm, the air suspension box was ticked, so we could opt for the plush ride that masks the extreme nature of those wide, low-profile rims or go all out and comfort be damned. That being said, even in its most aggressive, I never felt abused or roughed up. Tires are 245/35ZR21 Michelin Pilot Sports with bright red brake calipers peeking through the spokes, so cornering grip was impressive, though at a certain point, the physics of mass comes into play and there is only so much those super sticky tires can do.

The cabin itself is a revelation. There are very few cars in the luxury segment with which the Model S cannot stand proudly beside. The stitched leather dash with suede insert, carbon fibre dash, sculpted and highly adjustable and well bolstered sport seats surround you in an environment of modern luxury that few seem to marry so well.

While plain at first glance and dominated by the huge 17-inch touchscreen, its simplicity hides some clever storage: an opening in the door handle that perfectly fits a pair of sunglasses, a huge open space on the floor that will fit any size purse, and a tray tucked under the screen, not to mention the glovebox and centre armrest. However, note that any loosely placed items in almost any corner of the car will go flying around that elegant cabin at the slightest application of Insane mode.

Seating space is exemplary in both rows, with three proper seats in the back row, even the middle seat scooped out to provide a comfortable seating position. The hatchback trunk provides decent cargo space, and a small trunk in front (frunk!) provides additional space for a couple small duffles. Our tester had Next Generation Seats, which presumably means they were better than the stock seats, as well they should be for $2,800!

Of course, the centrepiece of the interior is the massive screen that controls everything from audio and entertainment to vehicle dynamics and information. Onboard music options include Slacker Radio and TuneIn, on top of whatever you carry on your smartphone, which can be easily paired via Bluetooth. The sunroof can be opened using a swipe and you can surf the internet or track your Wh/km usage or dial up connections in your phonebook. You can even ‘name’ your vehicle. I named this Solid White tester White Lightning. Of course.

While not enabled by the car’s screen itself, the technology behind it, a 3G connection whose data costs are covered for four years with the price of purchase, allows any Tesla to receive over-the-air updates to its electronics. For example, while equipped with the Autopilot safety suite with features like blind-spot warning, auto emergency braking and lane departure warning, that system does not yet include obstacle avoidance steering along with the existing emergency stopping and adaptive cruise control. However, once Tesla sorts out the code, owners will be prompted for the update and can download it overnight or while parked at work, and the next day it would be part of their car’s ever-growing suite of safety and convenience features.

While the Model S is a blast to drive, it is also a relaxing commuter when optioned with the Autopilot camera, radar and sonar sensors that are the hardware for self-parking and autonomous driving functions. Autopilot’s future parking skills will be to identify and park in parallel parking spots, pull up to a Supercharger and even park in your garage at home. In adaptive cruise mode, Autopilot currently maintains distance to cars ahead and can follow traffic right down to a standstill and even hold for a few seconds then proceed again. After a few seconds, though, it requires a tap of the accelerator to resume. Future updates will add the ability for the Model S to follow the curves and lane markings on the road, and even automatically change lanes simply by tapping the turn signal in the intended direction of an available space.

As cool as these self-driving features are, when given only a limited 48 hours behind the wheel of our favourite SpaceBoat, you tend to get greedy with the driving experience. While longstanding performance brands like Porsche and BMW have to deal with comparisons to more visceral, engaging cars of previous generations, the Tesla is burdened with no such past (except, perhaps the limited-volume Roadster). The steering is quick but light, and the car responds eagerly to driver inputs, the chassis eager, and of course, the motors responsive in a way we have never before experienced or even imagined. It is, despite all the technology, a driver’s car, and that is what seals our affection for it.

Sure it’s great that you never have to visit a gas station again, or that you can even charge for free (for life!) at one of Tesla’s growing network of Superchargers, that it is a technological tour de force and a break with convention that no other manufacturer has dared, and so many other reasons, but for us it is the drive. It is sheer joy, the power addictive and the driving experience comprehensively entertaining that we mourn all its self-driving capabilities. This is a car that is fun to drive, fun to drive fast, geeky fun to drive slow, and just fun to be part of something perhaps greater happening to the automotive industry, and I, for one, welcome it.

Oh, perhaps someone might care to hear about its range? Get over it. Unless you literally drive 400+ km every day and can’t afford the couple grand (on top of the minimum $80K you’d pay for the car) to get a level 2 charger, range really won’t be an issue. On the other hand, not all areas of Canada are supported by Superchargers or other charging infrastructure, so it may not be suitable for some rural residents and even road trips to certain areas of the country would require some careful logistical preparations. For the overwhelming majority of the population that live in urban areas and have ready access to electricity, it’s mere posturing to suggest that the range is a limiting factor.

About Jonathan Yarkony
Jonathan Yarkony is the former Senior Editor for Autos.ca and autoTRADER.ca, AJAC member, a Brampton-based automotive writer with years of experience evaluating cars and installing child car seats.
Follow me
You may also like
9.0
AdChoices
Latest Articles
﻿