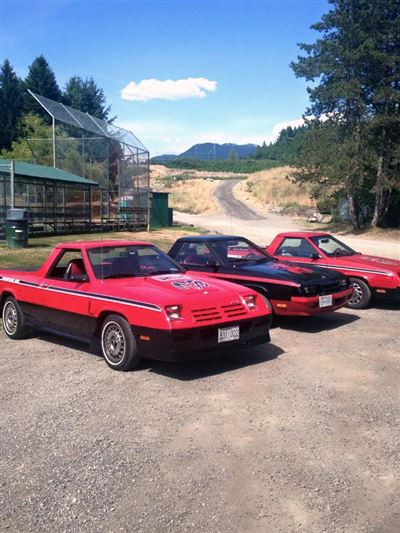 In a dusty gravel parking lot, a guy in a green Dodge Dakota skids to a halt, doubles back around, and whips out an iPhone. I can read his mind: “What in the heck are those things?” He snaps a picture, shakes his head and grins, flips us a quick thumbs-up, and then scoots off down the road with a spin of the rear tires.

“I guess that happens a lot,” I say to owner Spencer Acker.

“Oh yeah,” he replies, reaching in to pop the hood on one of his three Dodge Rampages, “They're pretty special.”

So, to answer the question, just what in the heck are these things? Rampages! Built for just a very few years from 1982 to 1984, this was America's first front-wheel-drive pickup truck, a sporty little ride with great fuel economy and a decent-sized bed for carrying surfboards in the brochure and a load of gravel in real life. Business up front, party in the back. No monstrous V8 that never gets used, just a stout little 2.2L four-pot and the curb weight of a Mazda Miata.

To own one would be unusual. To own two, well, maybe you need some spares or something. But Spencer Acker had four Rampages – one was written off not long ago when it was rear-ended by a drunk driver – as well as a huge collection of spares.

“Well,” he chuckles, “I guess I am a collector after all. Never looked at it that way.”

No monstrous V8 that never gets used, just a stout little 2.2L four-pot and the curb weight of a Mazda Miata.

A retired commercial fisherman from Prince Rupert, Acker now lives in North Vancouver in a little neighbourhood tucked close by Capilano University. One day, he was driving along and saw an odd little pickup truck off to one side. That was ten years ago, and he now owns two 1984 Rampages, one collector-plated 1983 version, and a huge array of parts and spares from cars he's found and disassembled himself.

Where we found this gem: Find of the Week: 1984 Dodge Rampage

“I've got tailgates, body panels, you name it,” Acker says, “You pretty much have to have 'em. Engine parts are easier to find, but stuff for the body is more difficult.”

Never as successful as it should have been in theory, the Rampage came about as a result of the same briefly lived trend that produced the Subaru Brat and the VW Rabbit Pickup (called the Caddy in some markets). With the memories of the fuel crisis of the 1970s still echoing in auto executives' heads, small and efficient trucks just seemed to make sense.

The Dodge Omni and the Plymouth Horizon came out of Chrysler's European division, and gave rise to several generations of somewhat interesting machines. Coupes like the Daytona would follow, and in the Omni GLH and GLHS, you even had genuine hot hatches.

Sometime in the early 1980s, special assignments guru Hank Carlini showed his poker-buddy Lee Iaccoca a custom-made little pickup truck made out of an Omni. Iacocca took one look at the proto-Rampage and said, “Build it.” So they did.

The Rampage debuted in 1982 with a price of less than seven thousand bucks, powered by the ubiquitous 2.2L Chrysler engine, here making 84 hp. That ain't a lot of power, but when empty, the Rampage was so light it could scoot along quite merrily. Things got better when a five-speed manual showed up for the 1983 model year (the trucklet debuted with a four-speed manual or a three-speed auto).

Cargo capacity was pretty good, rating a genuine half-ton. The Rampage's front half was entirely Omini, but the rear had proper cross members and leaf suspension. It was a little longer than its compact cousins, but not different to drive or park than a four-doored sedan.

Iacocca took one look at the proto-Rampage and said, “Build it.” So they did.

As with many Dodge products at the time, plenty of options were available, and there are all sorts of esoteric special editions to memorize. For instance, in 1983 Canadians were offered a Direct Connection model, which came with a fibreglass tonneau cover and no fewer than three spoilers, including one mounted on the roof. I'm not entirely sure that an 84 hp front-wheel-drive pickup truck needs that much downforce, but hey, whatever floats yer boat.

Acker's 1983 Rampage is collector-plated, and has been restored to original spec. He's hoping to put collector plates on one of his '84 models as well. “They're pretty picky,” he says, “That original radio is hard to find.”

We head out for a spin around the neighbourhood, and Spencer talks about how Rampages just seem to keep finding him. He'll get a call about a car or a part, a tip about a Rampage abandoned in somebody's backyard, or tucked away in a garage and forgotten. With this one, he showed up to buy the tonneau cover, and the owner offered him the entire car for around a thousand bucks. “An offer I couldn't really refuse,” he says.

His Rampage is sprightly enough for a modestly powered machine, zipping up the hill past Capilano without complaint. The passenger compartment isn't the biggest, and you can see why beefy farmers weren't going to be quick to abandon their F-Series and Dodge Rams for something this small.

And yet, it's curious that the Rampage didn't quite sell all that well. After all, for city-dwellers looking for a light-duty vehicle, gardeners and delivery companies and the like, the Rampage is pretty much perfect. The fuel economy ratings were extremely optimisitic – a claimed 5.0 L/100 km on the highway – but even if they were a bit inflated, it is an extremely economical little truck.

Datsun built an entire company on the success of its small truck, so why didn't the Rampage catch on? Are there lessons to be learned here by Hyundai, for instance, who are looking at actually producing their unibody Santa Cruz mini-pickup?

Datsun built an entire company on the success of its small truck, so why didn't the Rampage catch on?

Whatever the case, this particular Rampage endured, surviving issues like the rusting floorboards these trucks are known for. When it's time to hand it on, it'll be skipping a generation too – Spencer's young grandson Dylan will claim it in a few years when he gets his license.

“Old cars and country music, that's what he lives on,” Spencer chuckles.

Chrysler stopped building the Rampage after 1984, though there was a brief Shelby run for the last cars. These got a few go-faster goodies out of the Omni GLS, like quicker steering and a close-ratio manual gearbox. Power was up in 1984 to just under 100 hp.

And that was it, a three-year run and an interesting footnote in Mopar history. And yet, perhaps, the Rampage is something more.

Seeing three of these things gathered here in good condition, still running after all these years and bridging a generation gap in appeal, well, that's pretty special. It's enough to make you do a double take, enough to make you stop and get a better look. It's a unique machine; thirty years later, the little Dodge pickup Rampages on.