Fortunately, the Hellcat has a diplomatic power management system. When it’s pouring rain and you’re driving the kids to the swimming pool, the Charger Hellcat offers a series of ‘switches’ on its touchscreen interface that allow you to calm it down, limiting it to ‘just’ 500 hp. Fuel trickles out slowly as throttle is applied, traction and stability control mean you can drive with little stress, and it behaves pretty much like an ordinary family sedan.

But it is not. An ordinary family sedan, that is. Despite the relaxed power delivery and comfortable ride, with plenty of legroom, headroom and ample space for three across in the back seat, ordinary is the last thing you want to call it. It might just bite. At the very least you’ll have some claw marks to show for that disrespect.

Perhaps it’s a sunny summer day, a wide empty country road, not a soul in sight and those switches called up by the SRT button on the dash console switched to Sport (not even Track, that won’t be necessary here…). Sport mode, with the Red Key recognized, unlocks all 707 hp and 650 lb-ft of torque, turfs the wheel-spin-defeating traction control, and allows a little more leeway when traction of those poor, afflicted, likely-to-be-short-lived rear tires (they never stood a chance) is exceeded. That will happen almost from the merest whisper of your foot on the throttle. Subtle this thing ain’t.

Without power-stuttering traction control, the rear tires (even these upgraded Pirelli P Zero P275/40ZR20 performance tires) break free of their mortal bonds, spinning off an immaculate aria, the nose of the car lifting, the back end sashaying in an easy rhythm, the steering wheel grasped lightly and some gentle countersteer teasing it back online.

Then the 9.5-inch-wide tires bite, and your whole torso compress into the wide, comfy seats like being enveloped in memory foam while your brain feels like a stress ball in the grasp of an overworked, budget-crunching office drone. Lines and trees blur momentarily, and you shut it down after a brief couple seconds of ecstasy, at which point maniacal laughter interspersed with girly giggling spring forth with giddy abandon as you scan for lurking cruisers. Anything longer than a two-second burst of acceleration and you better be on a highway ramp, and even then you have maybe three or four seconds of maximum acceleration at most before anyone with a conscience and/or self-preservation instinct will back off.

Now, some of you may say, “Well, I’d rather drive a slow car fast, blah blah blah blah…” Sometimes I feel that way, too. But not on weeks when the Father of Sin, er, blesses me with a Hellcat. Damn me if it’s not a thrill to light up the rear tires for those few seconds and feel that burst of acceleration. Every stoplight becomes a complex algorithm of risk assessment vs the reward of visceral, antisocial, anarchic and almost sexual pleasure from the noises this car makes. And oh, the noises it makes.

Crucify me for a barbaric heathen, but as it so happened, we had an Italian-tuned V10 in the garage the same weekend, but the Hellcat took top honours in my ears thanks to its displacement advantage that contributed to a deeply rumbling basso, while the supercharger whined a sharp, whistling counterpoint as the intake manifold churned away in a chaotic harmony that has earned a permanent place in the Yarkony Hall of Fame Noises (move over laughing baby and Audi 4.2L V8).

There’s a lot going on under the hood to make those noises, starting with a big, reinforced lump of cast iron with eight cylinders arranged in a 90-degree V and hemispherical aluminum alloy heads making for 6,166 cc of displacement. The valves are operated by pushrods and gas is multiport injected (not directly into the cylinder), and a big honking supercharger sits on top of the engine, with a Lysholm-type screw force-feeding air into the cylinders to the tune of 11.6 psi of added pressure, though the combustion chambers max out at a 9.5:1 ratio compression ratio. Then boom, and as the revolutions per minute rise, the Hellcat is estimated to make 650 lb-ft of torque at 4,800 rpm (though much of the torque is available almost everywhere, from 2,000 rpm upwards) and power rising to a maximum output of 707 hp at 6,000 rpm just shy of its 6,200-rpm redline. Basically, it’s too much torque everywhere and too much power all over the place, especially for a rear-wheel drive sedan. It’s perfect.

To contain the fires of the demonically possessed Hemi, Dodge turned to transmission specialists ZF for hardware that could withstand such forces, and the Charger Hellcat uses an eight-speed automatic with paddle shifters dubbed the 8HP90 (AKA Beelzebub). Unlike the Challenger, the Charger is available only in automatic. As you’d expect the tranny also has more aggressive ‘tunes’ based on the SRT modes and paddle shifters for when you want to pretend you can do better than the machine brain.

At over two tonnes, the Charger Hellcat is no lightweight, and it is evident as you take to the corners delicately or risk opening a portal into another dimension – the Sideways Zone or Turned-Aroundia. Despite the weight, the car corners flat in stiffer suspension modes (at least as aggressively as I could push it on public roads), though the nose tucks down under heavy braking. The heavy and somewhat aloof steering helps remind you to respect the power, size and weight at all times. However, despite a lack of direct steering feel, the Hellcat offered a certain level of confidence even when loose, the kind of feeling that a good session on the skidpad might reinforce with a certain ease and comfort in being sideways.

Is it a car that would excel on a race track? Some have reported that it is surprisingly effective, but that is not its true calling. Sometimes it’s okay for a hammer just to be a hammer. I’d rather take this thing to the drag strip and let ‘er rip. Too bad Dodge said no.

Keeping the Hellcat shiny side up and facing the right way (most of the time) are those 275/40ZR20 Pirelli P Zeros on 20 x 9.5-inch matte-black-finish ‘Slingshot’ pattern forged (in a lake of fire of course) aluminum wheels. Fun fact: the optional wheels for Hellcat have a “Brass Monkey” finish. The SRT boys know you gotta’ fight for your right to give these things goofy names, after all, Hellcat was their internal name for this spawn of Satan in development that just got picked up by the marketing folk.

Putting the stop to acceleration and momentum when reason kicks in is a Brembo brake package: six-piston fixed monoblock aluminum calipers on 390-mm two-piece aluminum hat (that’s a new one for me!), vented and slotted rotors in front and four-piston fixed calipers on 350 mm vented and slotted rotors in back, so your eyeballs will need seatbelts, too.

While I could spout numbers and technical drivel all day, I found that its power and technical details are better captured using grunting and gesticulating and flailing and tearing out of hair to communicate the apocalyptic nature of this instrument of mass tire destruction. Not that potential owners are gorillas or in any way technically disinclined. I encountered one future owner in a parking lot that brushed me up on the dyno test results and the tracking of his car’s build progress online. But details like sodium-filled exhaust valves, hollow-stem intake valves, reinforced block and upgraded crankshaft, rods and pistons just seem so clinical and don’t really tell the story of how this engine seems to want to twist the entire car into a pretzel as you rev it, or the physical sensation of those rear tires hooking up, and the thrill and gratification as you drop a few gears at middling speeds, hear the engine rumble its satisfaction at being unleashed and mat the right pedal for some high-speed tire-chirping and further assault on the senses. Shall I go on? It’s a fully immersive experience, with sounds, smells, sights and physical forces (and you can practically taste the burnt rubber!) that all combine into an orgy of old-school motoring nirvana.

It’s a stark contrast to the shocking and surprising effect that the near silent and instantaneous torque delivery of the AWD Tesla Model S P85D; the drama, the build-up, the anticipation, and the explosive delivery are signatures of internally combusted powertrains that we know and love. I wouldn’t trade one for the other, and both, to me, represent fulfillment of driving enthusiast dreams (though the Tesla also has that whole using-no-fossil-fuels-and-zero-emissions thing going for it). But enough about that, those two have almost nothing in common except for their four-door layout and Wile E. Coyote-strapped-to-a-rocket acceleration. And great touchscreen interfaces, come to think of it.

The Charger Hellcat’s 8.4-inch touchscreen doesn’t quite measure up to the Tesla’s in size or capability, but it is fast, logical, and easy to learn and use, a system that many luxury brands would do well to learn from in its responsiveness and simplicity.

Overall, the Hellcat is an odd byproduct of its roots, as the Charger is an exemplary daily driver, the long wheelbase, heavy weight and adaptive damping able to neutralize road imperfections, though obviously challenging to maneuver in small spaces like our underground office parking lot. And with its leather and Alcantara seats and exemplary soft-touch plastics, it’s a fine environment to while away the hours if you’re inclined to take the family or a bunch of buddies on a road trip. 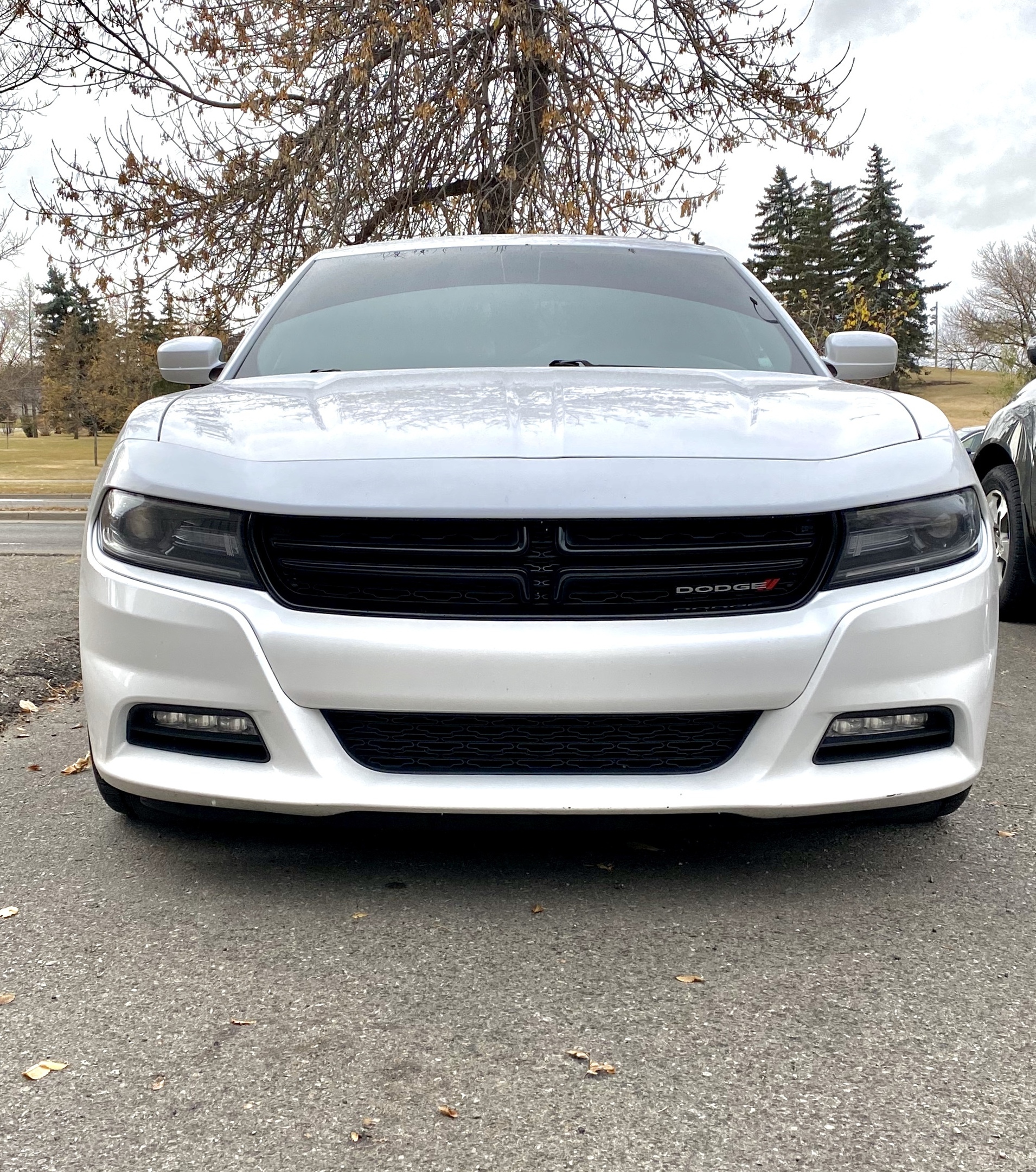 Of course, I shudder to think of the fuel bill, but those willing to spend upwards of $70K for this muscle sedan know what they’re getting in for, and with a tall eighth gear for cruising, the Hellcat might still deliver surprising efficiency on long steady drives. I wouldn’t know, since I spent my whole time laying waste to hydrocarbons at every opportunity. I think my fuel economy for the week was something like “Eternally Damned”.

Granted, the Hellcat is a throwback from another time, an outcast along with the whole marginalized “No replacement for displacement” culture, and perhaps a harbinger of doom for tires everywhere and muscle cars in general. It’s ridiculous in so many ways, but I can’t help but love its anachronistic rebelliousness, and in no small part because it’s built in my backyard. Not just that its success trickles down to the Canadian auto industry, its halo shining on all the Dodge Chargers in the lineup, but its popularity has demanded increased production at the Hermosillo, Mexico plant that builds its engines and at FCA’s Brampton Assembly where it is bolted together, a manufacturing facility not 10 minutes from my home. It’s a win for the home team and a car that will go down in history as a legend and a landmark, whether some other sedan comes along with 750 hp to knock it off its throne or this is the last salvo in the modern muscle car wars.

About Jonathan Yarkony
Jonathan Yarkony is the former Senior Editor for Autos.ca and autoTRADER.ca, AJAC member, a Brampton-based automotive writer with years of experience evaluating cars and installing child car seats.
Follow me
You may also like
8.4
AdChoices
Latest Articles
﻿